John Edlund and His Life-Preserving Valise, 1915 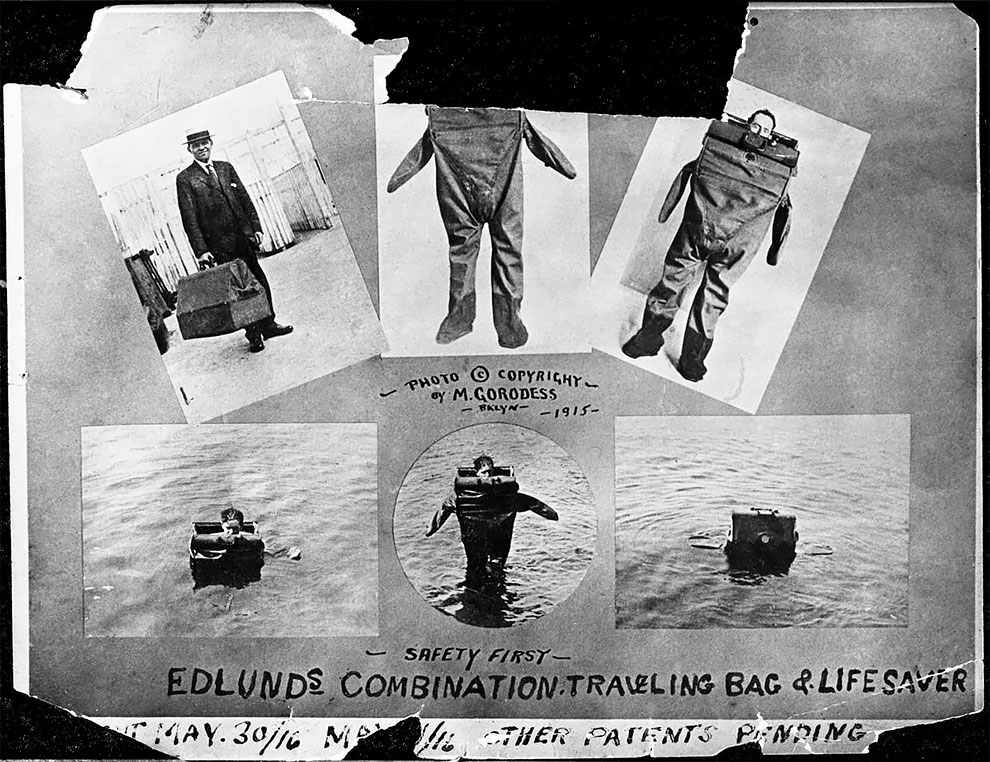 When the Titanic sunk in 1912 south of Newfoundland, the world mourned the deaths of more than 1,500 people, and were outraged by the news that there were not enough lifeboats for all of the passengers on board. As a result, more stringent regulations were established for the number of safety vessels a ship had to carry. But a Canadian inventor had his own idea: passengers could carry their own personal lifeboats — in their suitcase. 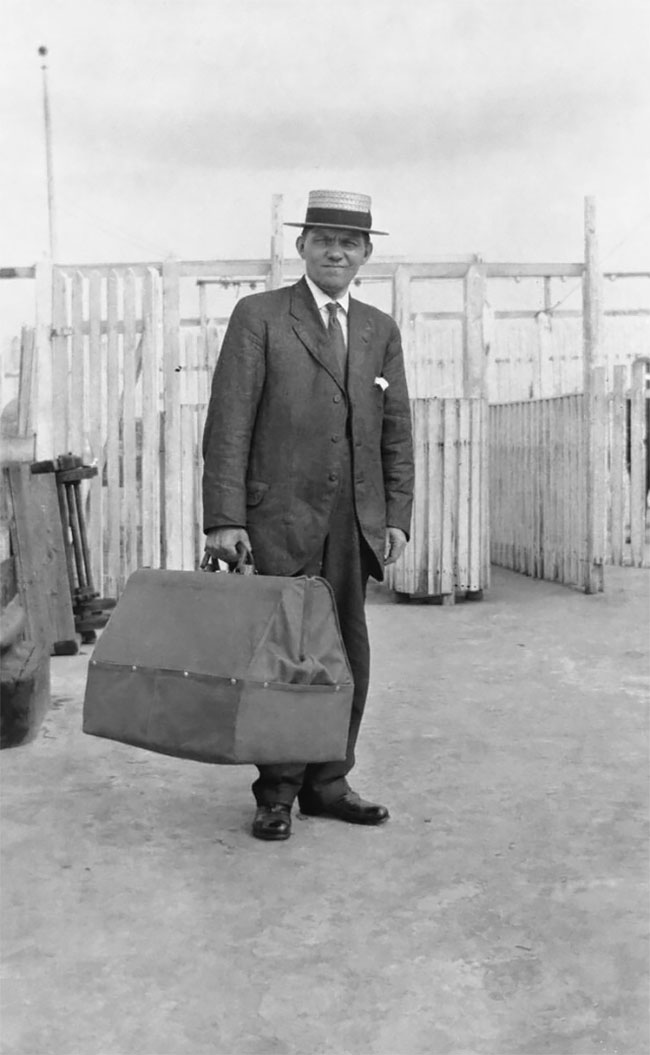 Far from any ocean or large body of water, John Edlund (1874–1957) of Claresholm, Alberta, set to creating a device that would ensure the safety of every ship passenger who carried one. Edlund, born in Norway, was a former sailor who had survived three shipwrecks before settling on the Canadian prairies. Moved by the tragic sinking of the Titanic, he developed a personal, full-body, life preserver suit, designed to fold right out of a valise. 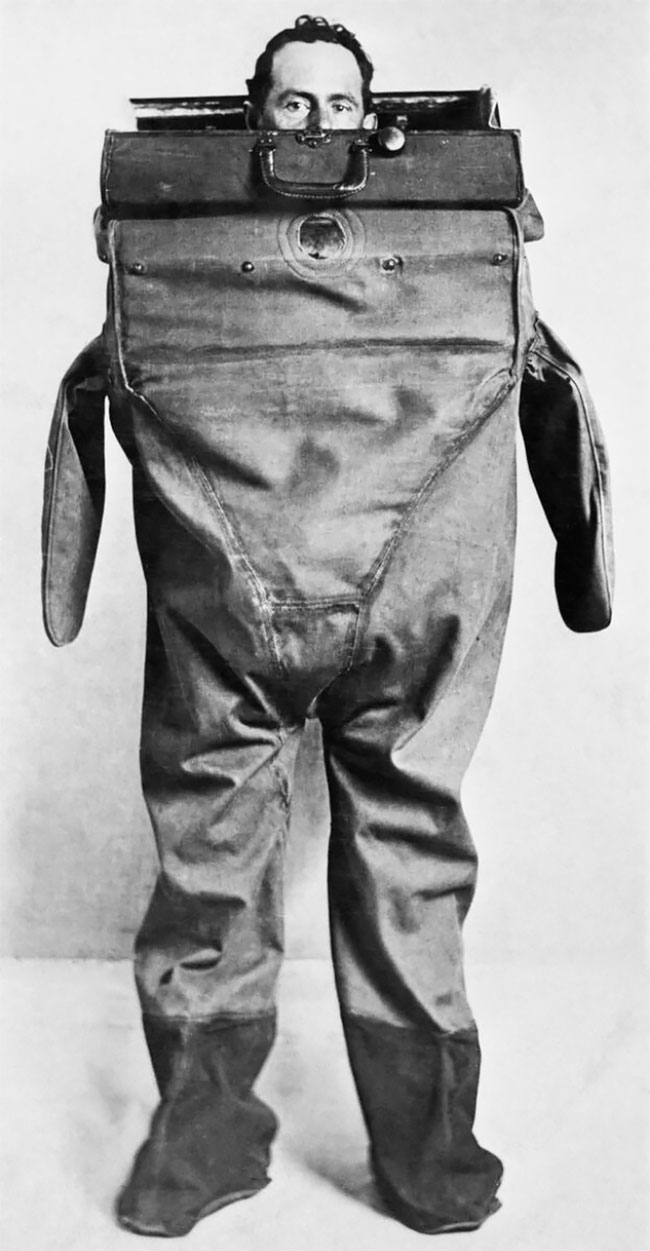 If a ship’s passengers were threatened those with such a case could open it, unfold the attached waterproof suit, and climb in. The preserver’s leg and arm flippers made it easy for its wearer to walk along the ship’s deck and enter into the water. The bag itself protected the swimmer’s head and upper body, and a small glass looking-hole let the swimmer see where he or she was going. The device, complete with airlocks, was said to keep its user dry and safe for up to four days, and even had room for some food. And, of course, when not housing a human body, the tote could store clothes and other, more typical, travel items. 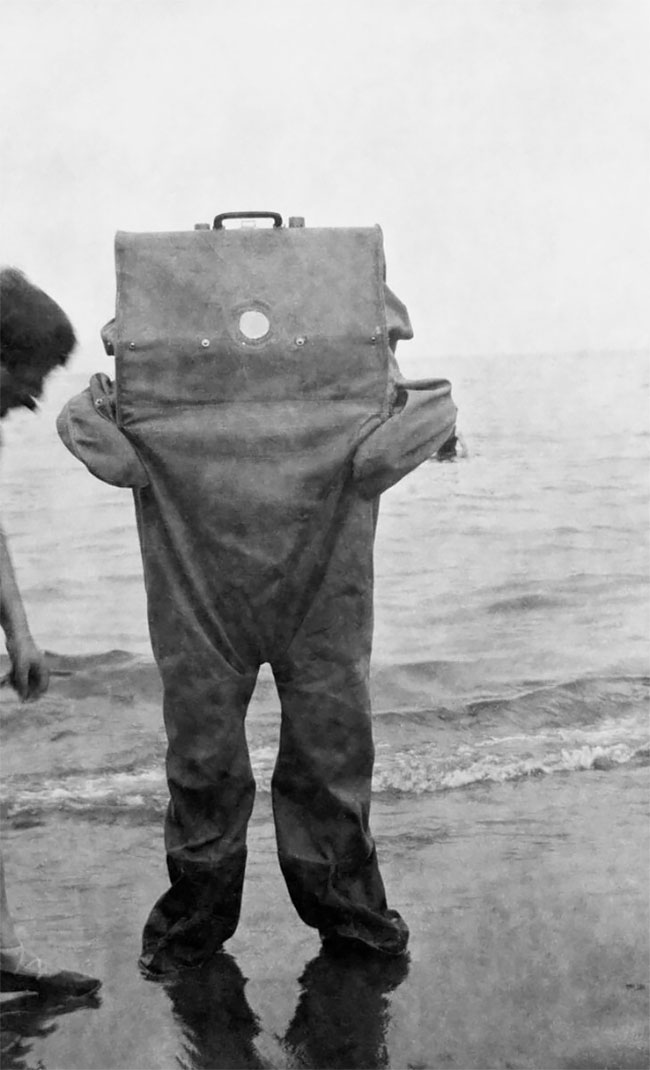 Edlund was offered a small fee for his design, but turned it down to pursue a market himself — to no avail. The safety suitcase was profiled in newspapers and magazines across North America, and there was notable interest in it during the First World War, but Edlund’s invention never flew (or sailed, if you will). 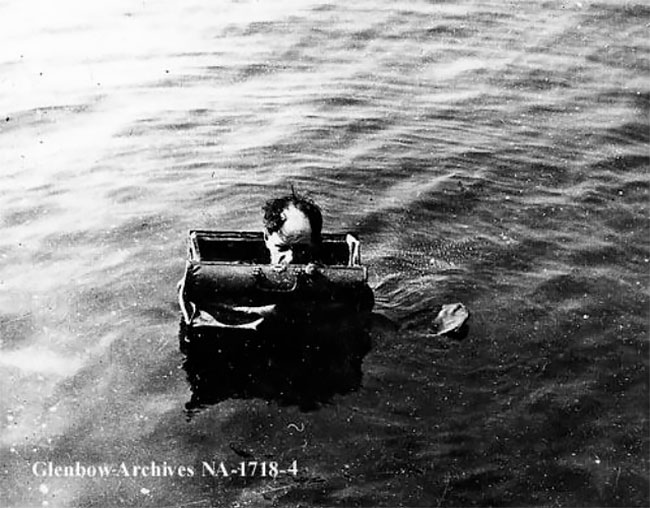 Alien Hunter: World’s Biggest Telescope will be Built in Chile
The New Nissan DeltaWing
NASA Has Compiled A List Of The Best Air-Cleaning Plants For Your Home
Google Art Project Launched at the Israel Museum in Jerusalem
Virtual Reality Device Allows Users to Wander the Forest through the Eyes of an Animal
Russian Craftsmen Built This Steampunk Trike Inspired By “Joseph Stalin” Locomotive
This Russian Flying Kamikaze Tesla Car Is Real And Waiting For The Passengers
Ubi-Camera Let’s You Take Photos With Your Hands
Photos Of Time Before The Invention Of That Grossly Antisocial Device: The Smartphone
Meet Selk'bag, The Wearable Sleeping Bag
Teaser: Nissan LEAF to Attempt Setting the Guinness World Speed Record
This Tiny Prefab Home Inflates Itself With Body Heat
Davis Divan Three-Wheeler: The 1940s Unique Concept Car That Lost In History
Smart Bullet Path
The Very Rare 1980 4-Door Chevrolet Corvette
An Abstracted Lamborghini Is The Basis For The Bizarre-Looking Lo Res Car From United Nude
Amazing dynamic projects by Aaron Koblin
The New Tesla Model M Concept Bike
Hilarious Personal Computer Ads From The 1980s
Toyota Has Made A New Concept Car Out Of Wood
Cool Retro Photos Capture People With Their Station Wagons From Between The 1950s And ’70s
Superb Yamaha Swan-Like Scooter With Insect Wings Will Make You Feel Like Flying
Nano Hummingbird
The "Super Brain" Phone Cabin
1900s, invention, John Edlund, Preserving, suitcase, Valise

Coolest Designed Products Of 2016
This Art Collective Creates Concepts That Have Emerged From The Coronavirus Pandemic
The World's Most Expensive Parking Lot is in the Middle of the Ocean
Louie Mattar’s Cadillac, the Car That Has Everything, 1952
The Nissan Production Line
Taiwanese Modder Turns Doom Eternal's BFG 10000 Into The Ultimate Gaming Rig
This Supercargo Vehicle Is Something Out Of This World
Engineer Grandfather Turns His Backyard Into An Amusement Park For His Grandkids
A Fake 'Black Mirror' Shop Has Appeared As If By Magic In London
The Russians Make The Best Truck In The Universe For $50K
2007 ‒ 2022 by Design You Trust. Proudly hosted by WebHostingBuzz.
Privacy Policy · Terms of Service · Content Removal Policy ❤️ 🇺🇦