This Feline-shaped Kindergarten Is The Cat’s Meow 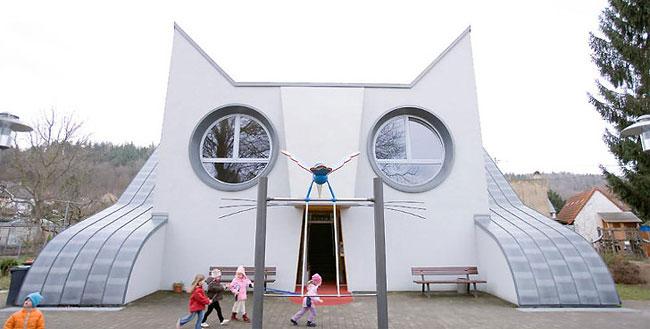 Introducing young children to a school environment can be a challenge, but one kindergarten in Germany has no trouble getting their students excited for the day. This cat-shaped kindergarten in Karlsruhe, Germany, offers a whimsical playground for the kids, inside and out. 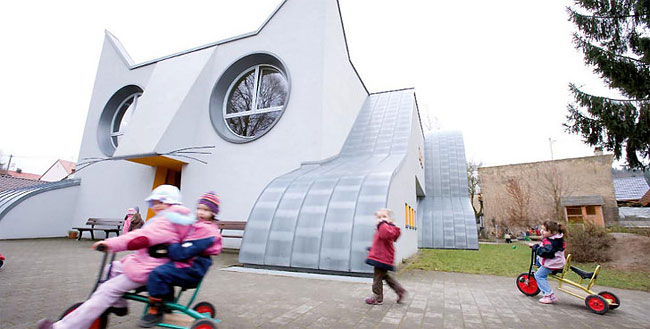 The children who attend Kindergarten Die Katzie (literally “The Cat”) no doubt are thrilled to play and learn in a building shaped like one of their favorite pets. The metal sculpture-cum-building is a joint effort between French artist Tomi Ungerer and architect d’Ayla-Suzan Yöndel, the result of the campaign “Europe Without Borders,” intending to be a symbol of the friendship between the German and French people. 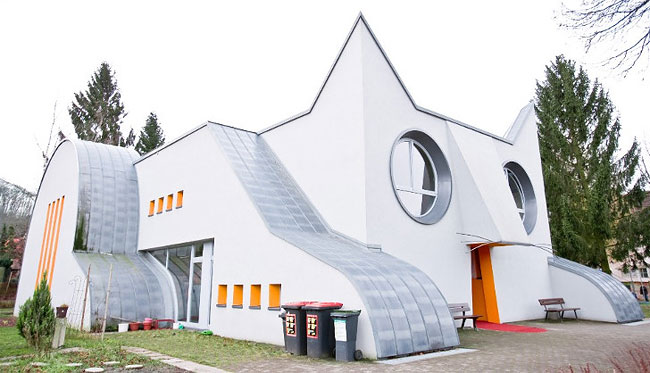 Approaching the building is like walking straight up to a giant feline, paws astride in a Sphinx-like pose, with big round eyes gazing out over the entryway. About a hundred lucky kids attend this school, and each has to pass through the cat’s mouth, almost as if being eaten, to enter the building, but we suspect they aren’t afraid, once they know what awaits inside. 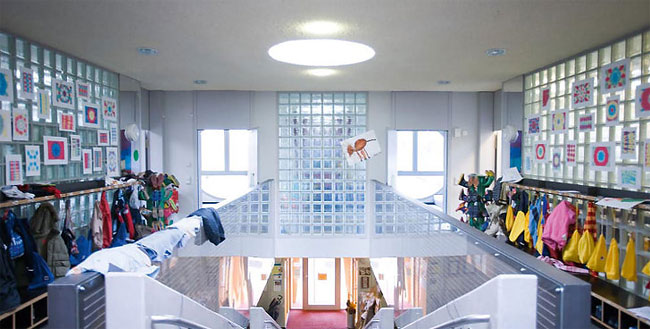 In the belly of the beast, a relatively open floor plan houses a coatroom, classrooms, dining room and kitchen. The inside of the ‘paws’ are play areas for the tots, and the second floor allows kids to peer out of the giant eye-shaped windows. The play on a cat’s anatomy doesn’t end with the interior spaces, though, as the kindergarten also has a green roof, giving the illusion of “fur.” 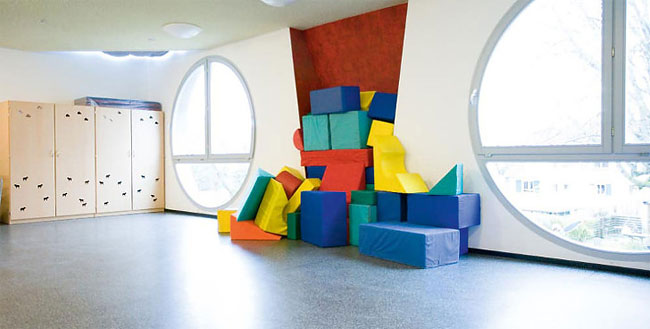 Perhaps the most exhilarating part of
the building’s design can’t even be seen from the street. Behind the cat kindergarten is what you expect to find behind just about any cat: a tail! In this case, the kitty’s tail is a two-story metal slide that protrudes from the upstairs play area and offers a really spectacular exit to a truly unique building. 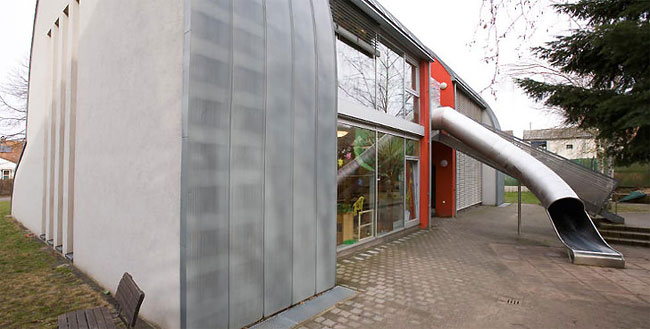 Inverted Solo House Pyramid By TNA Architects
The Spectacular World's Fair Exposition Universelle in Rare Pictures, 1899
Star Wars Millennium Falcon-Style Home In Australia
The Cube Project
New York Secret Rooftop World
Fantastic Cave Art By Ra Paulette
Shakhti 360 Leti: Luxury Hotel in Himalayas
Architect Designs Sustainable Futuristic Tree Houses In Italian Forest
Unique House for the Atomic Age from 1953
Architect Martín Marro Builds Cozy Home Inside The Real Oil Tank, And You Can Live In
This Cozy Place - Revugia Spa & Wellness Resort Hotel By Lichtecht
Mid-Century Grain Silo Transformed Into A Gorgeous, Affordable Home For Two
Patrick Dougherty's Mind Blowing Nest Houses Made Of Living Trees
The New Apple Store In Thailand Looks Like A Vortex Of Wood
These Stairs Show How Many Calories You Burn While Climbing Them
Why Did A Brazilian Millionaire Winch A Formula 1 Car Up The Side Of An Apartment Block?
This Sculptural Shelter Is A Place To Enjoy Quiet And Restful Contemplation
Watertower By Tom Fruin
A Giant Ancient Egyptian Statues Unearthed
Model of Hogwarts Castle
Invisible Barn Is A Mirror-Clad Folly Camouflaged Among The Trees Of A California Forest
Temple of Boom: A Vivid Tribute to The Parthenon
Large Scale Surreal Architectural Collages By Anastasia Savinova
Siberian People Turn Their Own Garages Into Compact Mini-Palaces
feline, kindergarten, shaped

Most Awesome Wall of Air Conditioners Appears in Fuzhou, China
HUS-1 – The Ultra Tiny House Of Your Dreams
Unique House for the Atomic Age from 1953
“Potemkin Village” - A Fake Urban Decorations Among The Ufa City
What Do You Think of this Dessert Themed Public Toilet in Japan?
Inside the Google's Headquarter in Zurich, Switzerland
Abandoned Soviet Children's Pioneer Camp "Fairy Tale": The Most Weird And Beautiful Abandoned Location You've Ever Seen
Facebook Reveals Expanded California Campus Designed By Frank Gehry
Inside the World's Biggest Tree House by Horace Burgess
These Stairs Show How Many Calories You Burn While Climbing Them
2007 ‒ 2022 by Design You Trust. Proudly hosted by WebHostingBuzz.
Privacy Policy · Terms of Service · Content Removal Policy ❤️ 🇺🇦