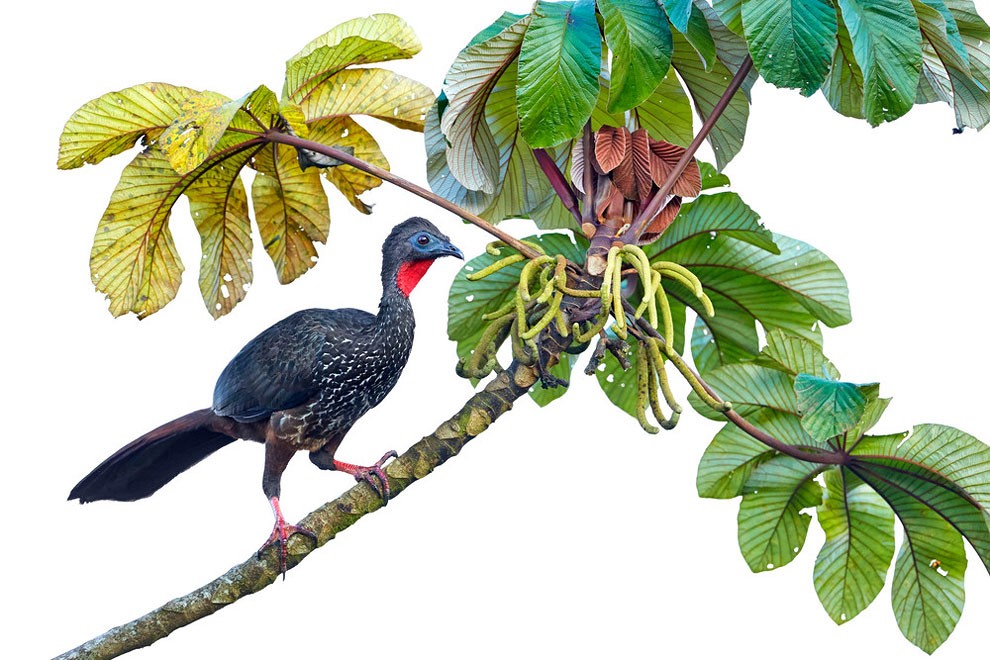 Highly commended birds : Crested guan by Tim Hunt (UK). ‘This photo shows a crested guan in the cloud forests of Costa Rica as it pauses while foraging on a lone branch. Due to the clouds that are so typical for this habitat, I could often only photograph the bird’s silhouette against a grey sky. But then, for a short moment only, the sun broke through the clouds, and I overexposed the image by over two stops in order to blow out the background and allow this beautifully marked bird to stand out’. (Photo by Tim Hunt/GDT European Wildlife Photographer of the Year 2015) 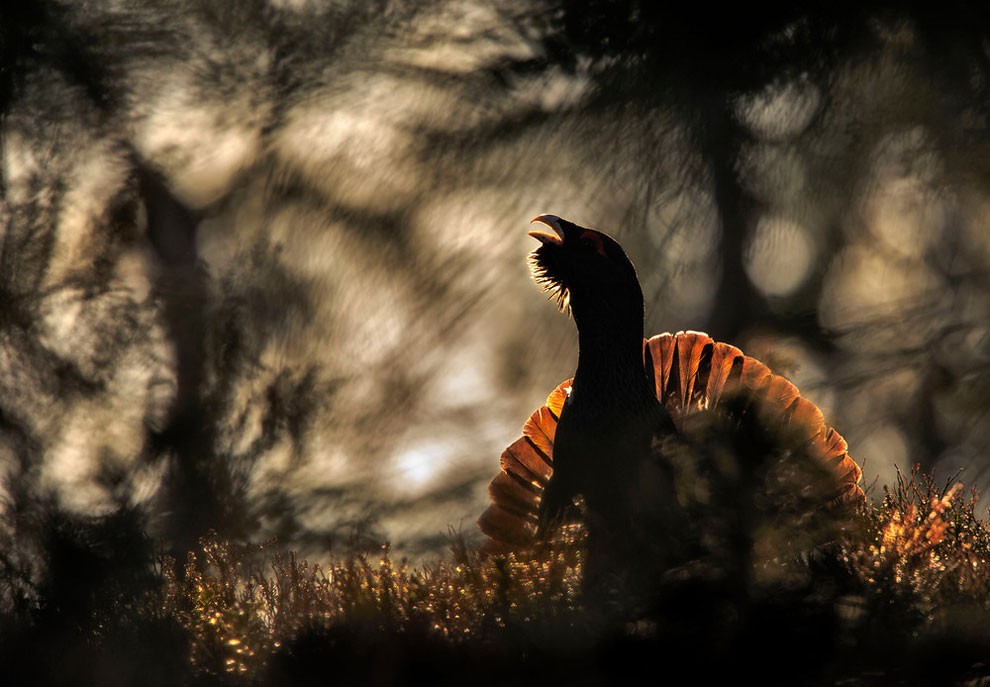 Runner-up Birds : Capercaillie by Bernt Østhus – (Norway). ‘Over the course of the years I have often witnessed how the sun moves across the ridge where the capercaillies would carry out their mating ritual. So I had a pretty good idea where to pitch my hide to take a photograph in which the backlight filtering through the trees would make the bird appear as a silhouette. All I needed now was fair weather and one of the capercaillies in the right position. I took this photo in the woods not far from the village where I grew up’. (Photo by Bernt Østhus/GDT European Wildlife Photographer of the Year 2015) 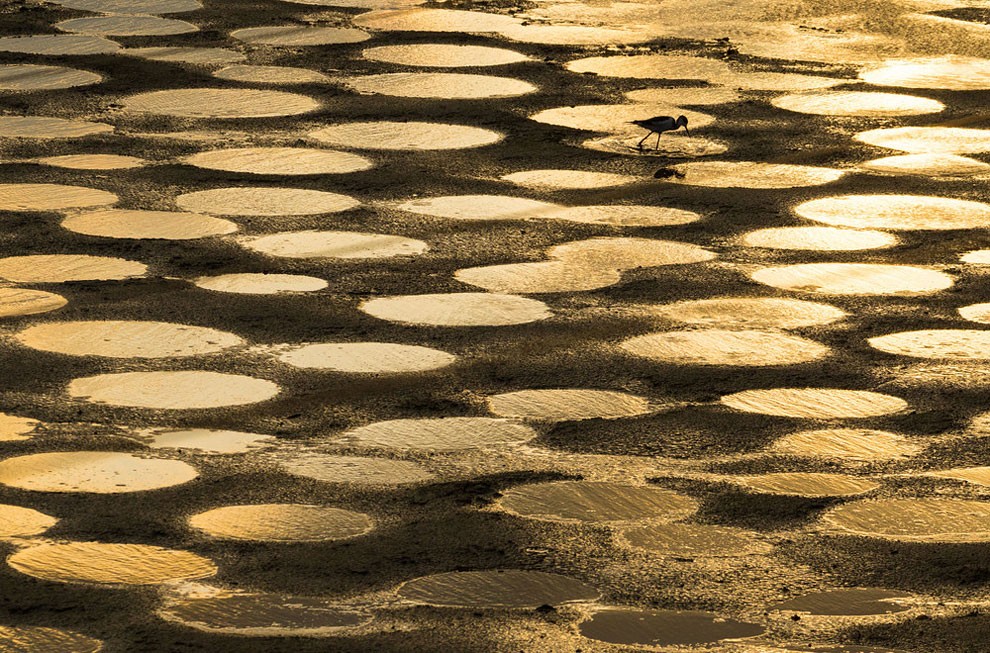 Winner Birds: Fishing in the Evening in Hula Valley by Juan Carlos Muñoz (Spain). ‘This photograph was taken at a fish farm in Hula Valley, in the Galilee region of Israel. In the soft evening light, circular puddles stood out against dark muddy areas at the bottom of a drained fish pond. They formed the perfect backdrop for a black winged stilt that was searching for food in the shallow water. The Hula Valley is an important resting ground for wading birds and, due to conservation programmes, a balance has been achieved between economic use and wildlife protection’. (Photo by Juan Carlos Muñoz/GDT European Wildlife Photographer of the Year 2015) 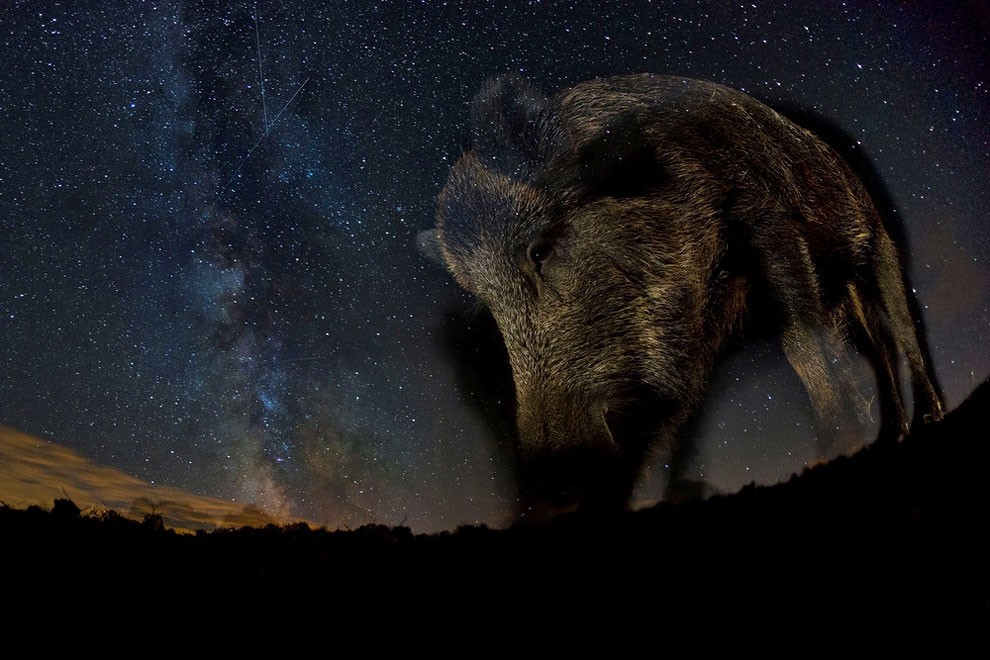 Winner mammals: Night star by Bence Mate (Hungary). ‘I have always tried to explore new fields in nature photography. I especially like photographing animals at night, which has its very own unique challenges. This photo was made using a remote control camera that I had put in an old fish box. It was difficult to estimate in advance the necessary balance between the flash light and the natural light from the stars. I also hoped that I would not scare away the animal as the wild boars in our area are extremely shy. Luckily, it stood still during the shot’. (Photo by Bence Mate/GDT European Wildlife Photographer of the Year 2015) 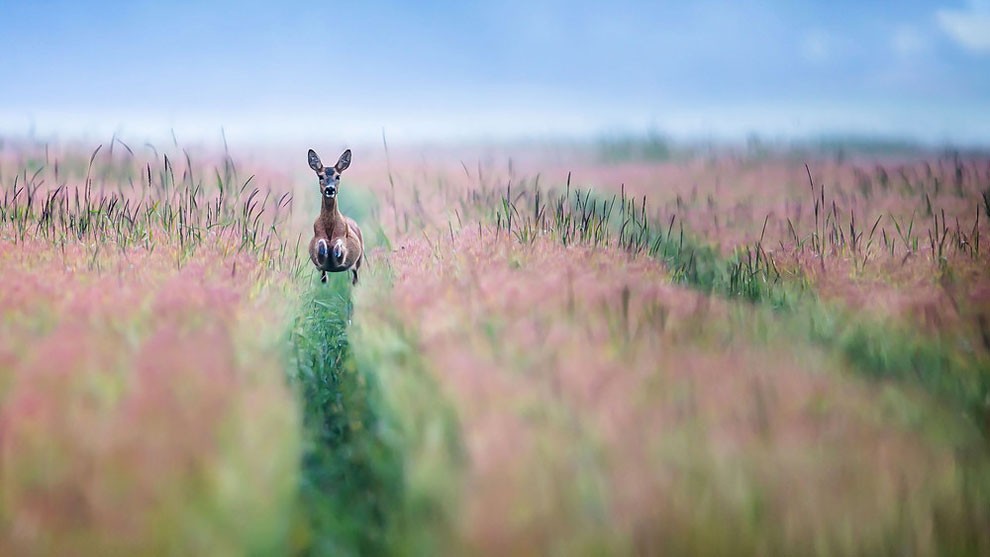 Highly commended mammals: Morning exercise in the meadow by Duy anh Pham (Norway). ‘The rutting season of roe deer had just begun when I managed to take this photo near Fredrichstad. The day before, I had spotted a single doe in a cornfield, although I did not see a buck. The following day I was there again before sunrise. Thick fog covered the landscape. Half an hour later, the veil lifted and I saw the doe approaching from the other end of the field. She must have heard a contact sound and galloped straight at me’. (Photo by Duy Anh Pham/GDT European Wildlife Photographer of the Year 2015) 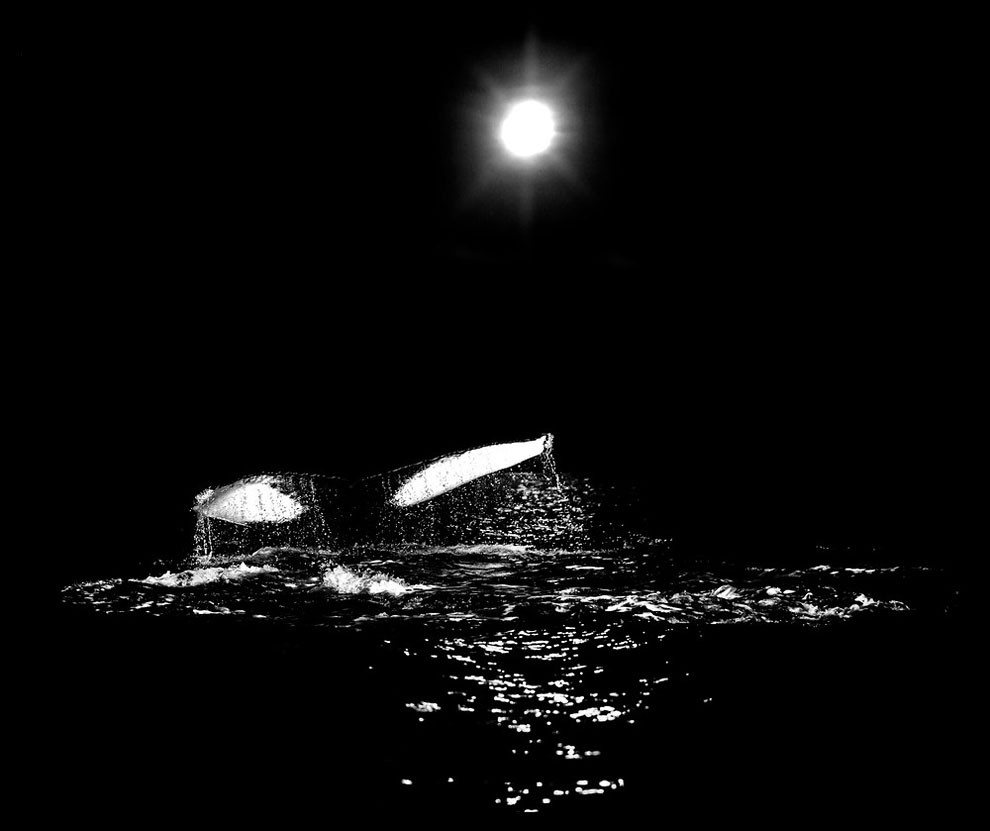 Runner-up mammals: Humpback whale under the Arctic moon by Audun Rikardsen (Norway). ‘For a number of years, massive shoals of herring have gathered during the dark winter months in the fjords near the town of Tromsø. They are followed by numerous humpback whales that chase the herring in the dark, often only lit by moonlight. Every whale’s tail has its own individual characteristics, which can be used to differentiate one animal from the other. This also enables scientists to follow their migration routes across the oceans’. (Photo by Audun Rikardsen/GDT European Wildlife Photographer of the Year 2015) 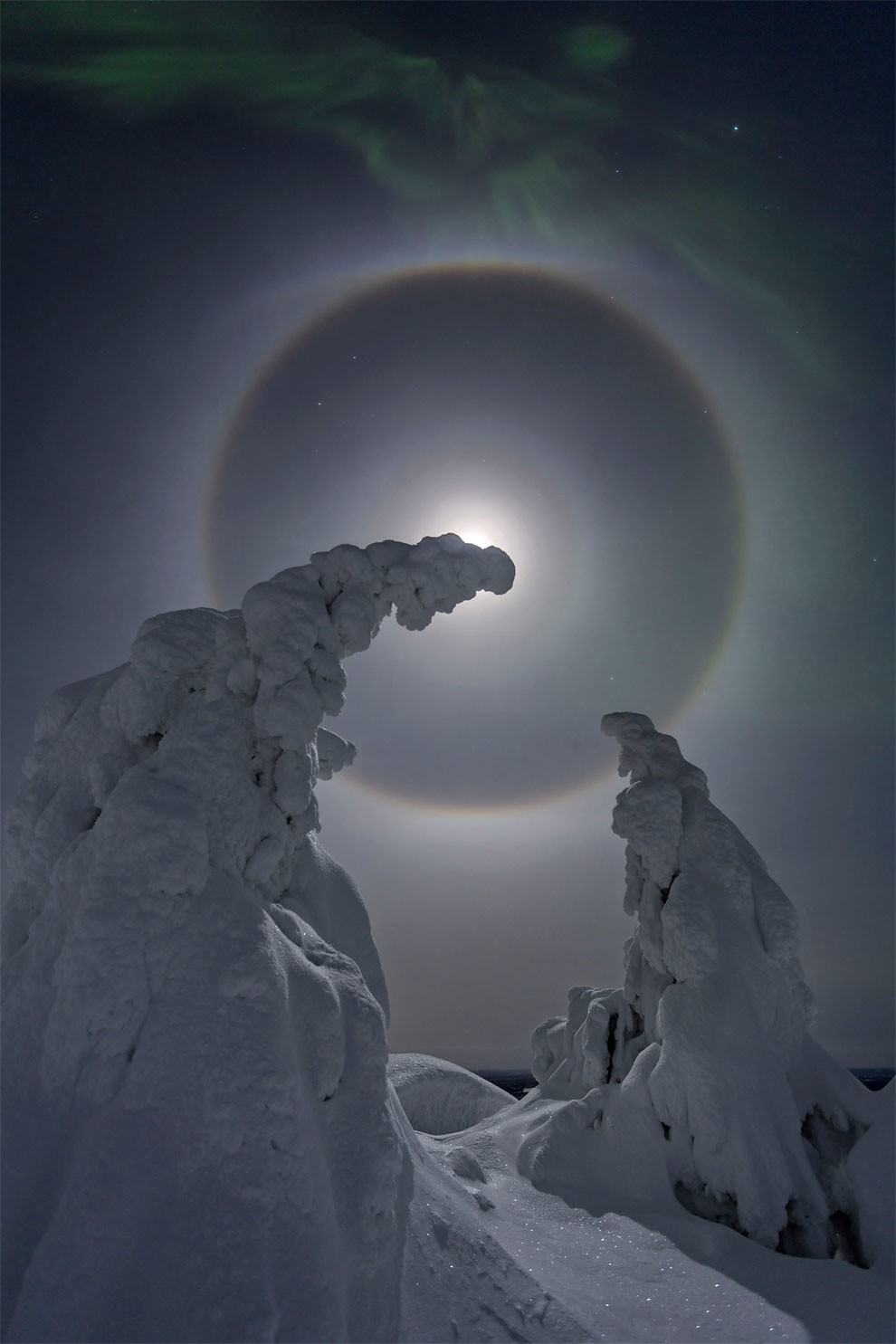 Winner landscape: Snow-laden trees under a full moon, halos and northern lights by Esa Pekka Isomursu (Finland). ‘A very special night in Syöte national park (Finland): the full moon hung over spruce trees deeply covered in snow and there were ice crystals in the air; just enough so that halos would form, but so few that the stars were still visible. While I was photographing this light phenomenon, a curtain of polar lights suddenly appeared. For a short moment they danced above the halos, just long enough for me to capture this magic moment in a photograph’. (Photo by Esa Pekka Isomursu/GDT European Wildlife Photographer of the Year 2015) 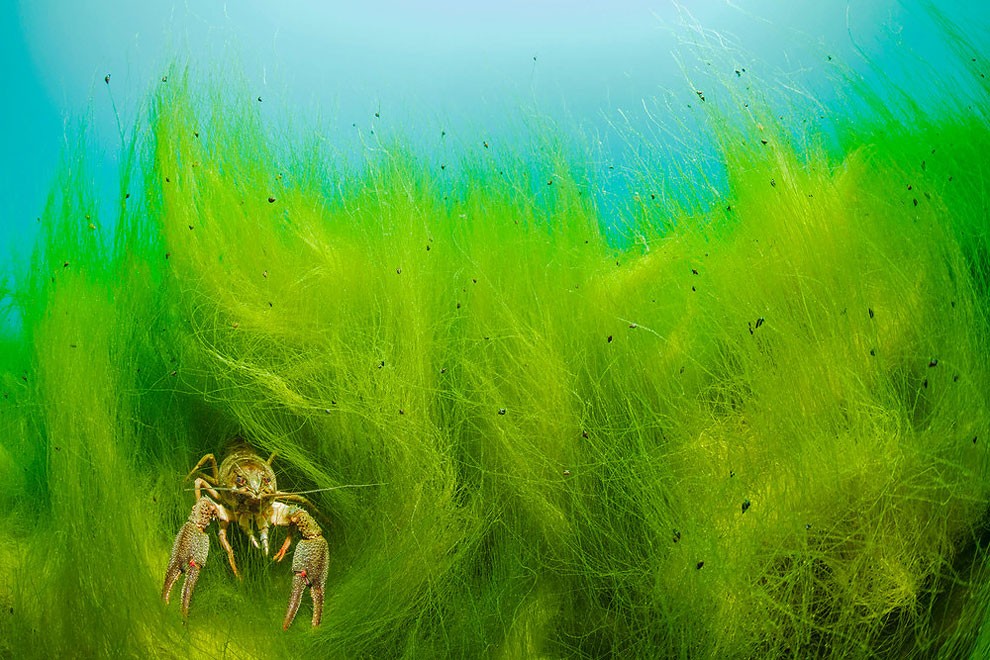 Runner-up underwater world: Intruder by Wahrmut sobainsky (Germany). ‘The American crayfish, an invasive species in our country, was introduced from North America to central Europe around 1890. It not only drives out the local crayfish species in frightening measures, but also passes on the crayfish plague to which it is immune. This predominantly nocturnal species is mostly found sitting on visually unattractive sand or mud; much to the photographer’s joy, this one here obviously prefers the greenery of a German lake among tiny water snails’. (Photo by Wahrmut Sobainsky/GDT European Wildlife Photographer of the Year 2015) 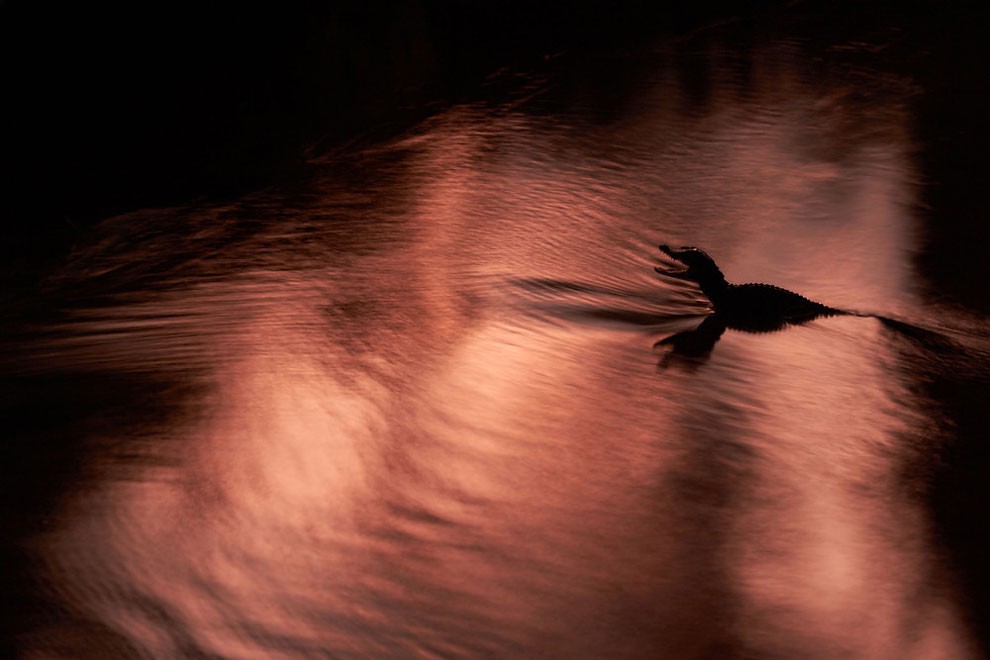 Winner other animals: Peace at the stream by Quentin Martinez (France). ‘Young caimans spend their days in shallow water well hidden by dense vegetation that protects them from numerous predators. Only at dusk do they emerge from their hiding places to search for food. I knew a very good spot where many young caimans lived. There was no cloud in the evening sky on that day and the sun’s diminishing light reflected on the water of the river. To blur the moving current of the water, I had to stop down a lot and use a tripod because of the necessarily long exposure time’. (Photo by Quentin Martinez/GDT European Wildlife Photographer of the Year 2015) 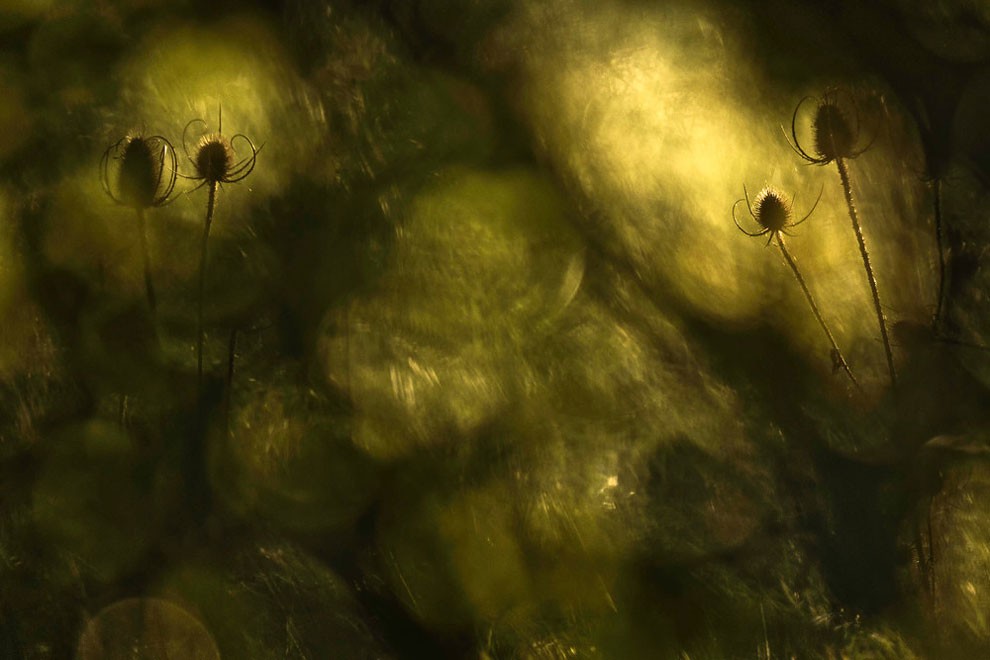 Runner-up winner plants and fungi: Autumn mirror by Sébastien Tournier (France). ‘It was a lovely day in October, exactly the right kind of weather for a long walk around the village of Ain. I had already been walking for an hour when I noticed the flower heads of some wild teasel, which seemed to glow in the low backlight. To photograph them, I stood behind a bush and focused through a gap in the foliage. I like the contrast between the hard and prickly flower heads and the soft dissolved background’. (Photo by Sébastien Tournier/GDT European Wildlife Photographer of the Year 2015) 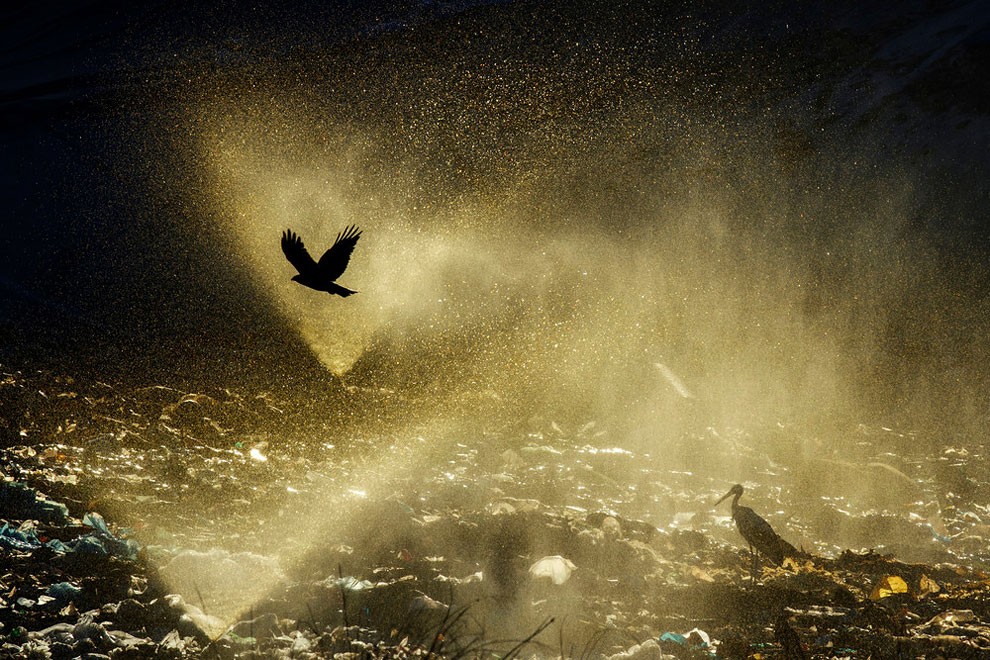 Winner man and nature: Landfill lightshow by Jasper Doest (Netherlands). ‘This photo was taken at a small recycling centre in southern Spain, where numerous white storks and black kites gather to search for food among the municipal waste. This source of food is reliably available all year and so there is no need for the birds to move on. As the waste degrades, strong acids are formed that are diluted by spraying water over the waste. Seen against a backlight, it is a beautiful spectacle, even though it has a vile smell and is, in any case, altogether questionable’. (Photo by Jasper Doest/GDT European Wildlife Photographer of the Year 2015) 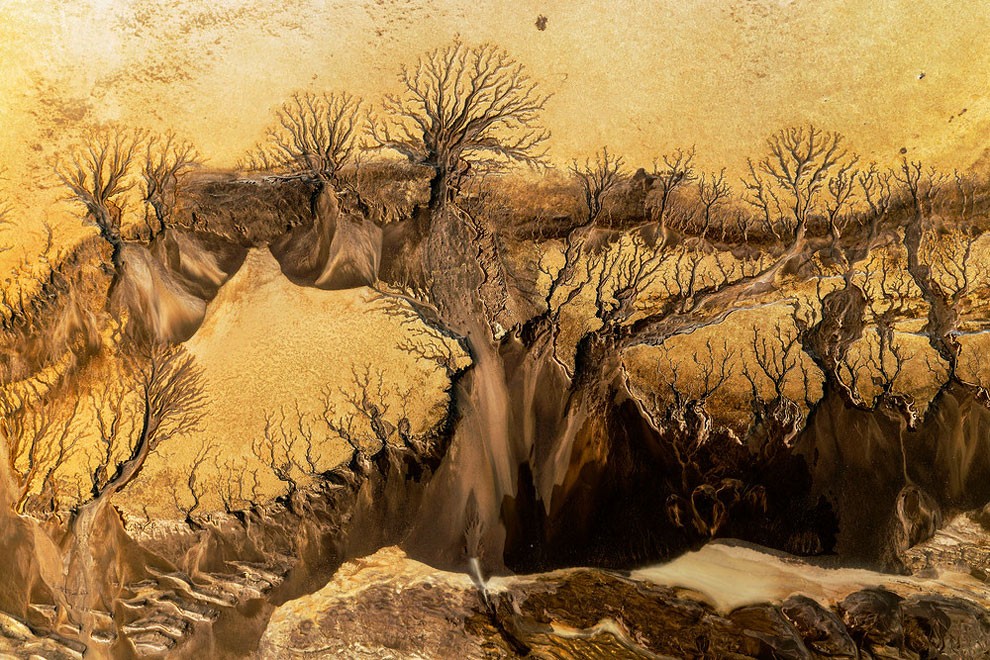 Runner-up nature’s studio: The forest by Fran Rubia (Spain). ‘A small puddle of mud at the end of Vatnajökull glacier produces these amazing textures by filtering melt water. The funny thing is that there are hardly any forests on Iceland, so this one is something very special. It is a living pattern, a forest that continuously reshapes itself. At night in March, when temperatures fall below freezing, it stops growing, because the water freezes; the next day, when the sun returns, it blossoms again, branches and roots reappear and the forest returns to life’. (Photo by Fran Rubia/GDT European Wildlife Photographer of the Year 2015)