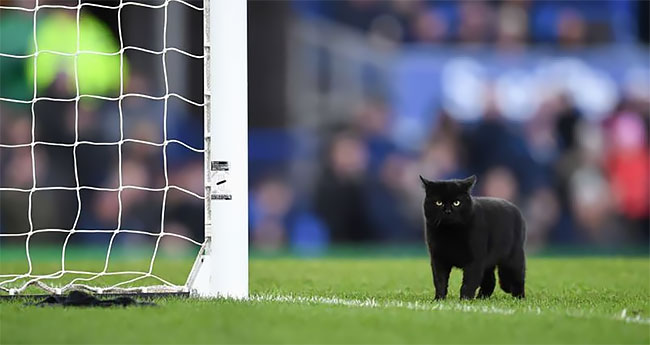 Over the weekend, the Premier League match between Everton and Wolverhampton Wanderers had a short delay as a black cat had wandered onto the pitch – and refused to leave.

The game, which took place at Goodison Park in Liverpool, saw the four-legged spectator wandering around the goal and sidelines. The crowd looked on in delight as none of the players or officials even tried to chase away the feline. Perhaps they all forgot their laser pointers and balls of yarn?

Thankfully, the cat eventually got bored and scampered to the sideline. Everton, however, eventually lost the match, going down 3-1, to the visiting team. 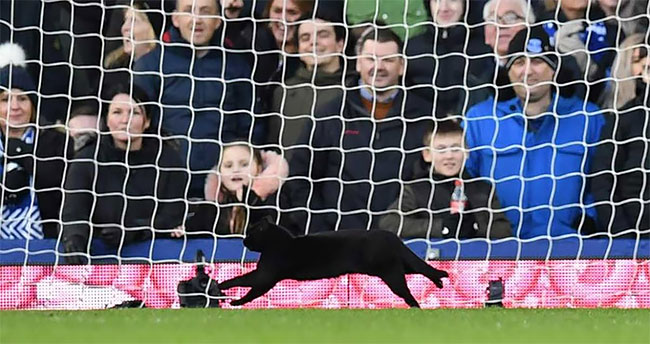 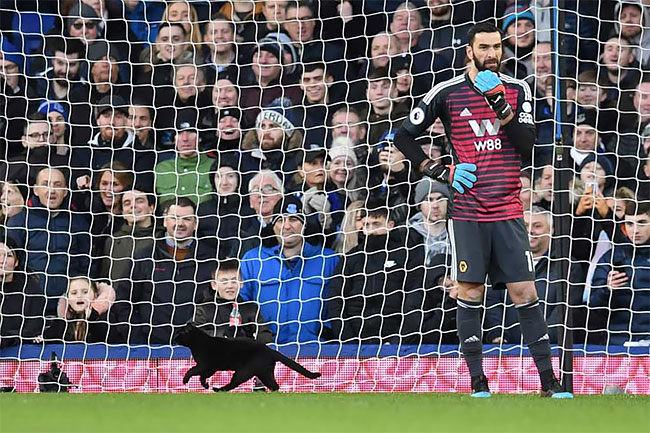 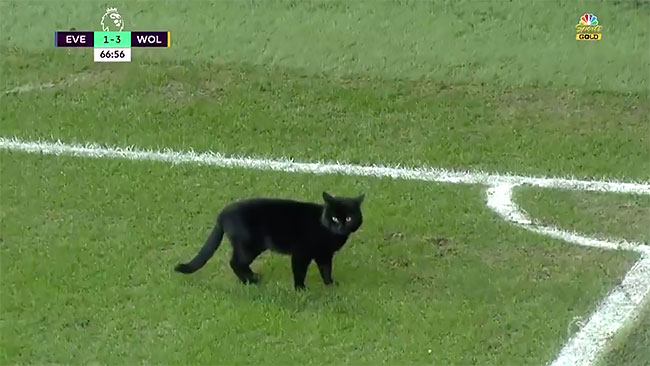 There's a paws in the game to deal with a pitch invader. Here's the purrpatrator.

A black cat nipping up to Goodison Park for Everton vs Wolves pic.twitter.com/WGLufee1k1

THERE'S A CAT ON THE PITCH AND HE DOES NOT WANT TO LEAVE pic.twitter.com/K0YNNMU522

Introducing The World’s First Bee Influencer
This Cat Is A First-Rate First Mate
"The Redemption": Artist Tawny Chatmon Celebrates The Beauty Of Black Hair Through Striking Portraits
19-Year-Old Black Cat Turns Into A “Nordic God” Due To A Rare Skin Condition
Shooting an Elephant
A Thrill-Seeking Photographer Risked Life And Limb As He Swam Alongside A Ten-Foot-Long American Crocodile Near Belize
Fish Tornado
Edouard Martinet’s Masterfully Sculpted Animals And Insects Made From Bicycle, Car And Motorcycle Parts
Inseparable Terrier Duo Become Real Internet Sensation
World’s Largest Slug is Bigger, Slimier, and Way Cooler Than You’d Imagine
Photographer Tim Flach Spent Two Years Photographing Animals That May Soon Be Extinct
That Moment When Your Dog Has So Much Fur That You Can Practice Braiding With His Tail
"Hail The Dark Lioness": An Important Series Addressing Identity Politics And Racial Injustice
ROME “3 Dreams of Black”
Feel Your Heart Melt into Bubble Bath at a 'Wet Dog' Photo Series
Buttons and Kitty - Two Baby-Friends
There’s A Species Of Wild Cats Where The Adults Look Like Kittens Their Entire Lives
Close Up
These Hilarious Cats Look Like Furry Catbuses Come To Life
Russian Mother Takes Amazing Intimate Portraits Of Her Kids With Animals
If You Ever Feel Sad, Just Remember That Horses Can Grow Mustaches
Stunning Vintage Photos Of Pets Wearing Gas Masks During The World War I
Beluga Whales Create Art in Japan Aquarium
The Algonquin Hotel In NYC Has A Kitty Concierge Named Matilda
animals, black, cat, football, soccer

Armour for Animals by Jeff de Boer
Breathtaking Photos of Models Pose with Endangered Animals
The Dog Project: 120 Playful Papier-Mâché Pooches Let Loose On The Beach
Orphaned Raccoon Thinks She's a Dog After Being Rescued and Raised by Family with Dogs
The Seventh Annual Running of the Wieners – Oktoberfest in Cincinnati
Japanese Photographer Captures Very Sad Stray Cats And Their Games
2021 Social Justice Kittens Calendar Is Here!
Now In Oregon You Can Have Llamas Dressed As A Bride And Groom Attend Your Wedding
During The Pandemic, This Artist Decided To Start Making Portraits Of Her Cat, Later Turned Into A Calendar
The Art Movement Created by Dogs
Source of inspiration since 2007. Proudly hosted by WebHostingBuzz.
Privacy Policy · Terms of Service · Content Removal Policy 🇺🇦 ❤️