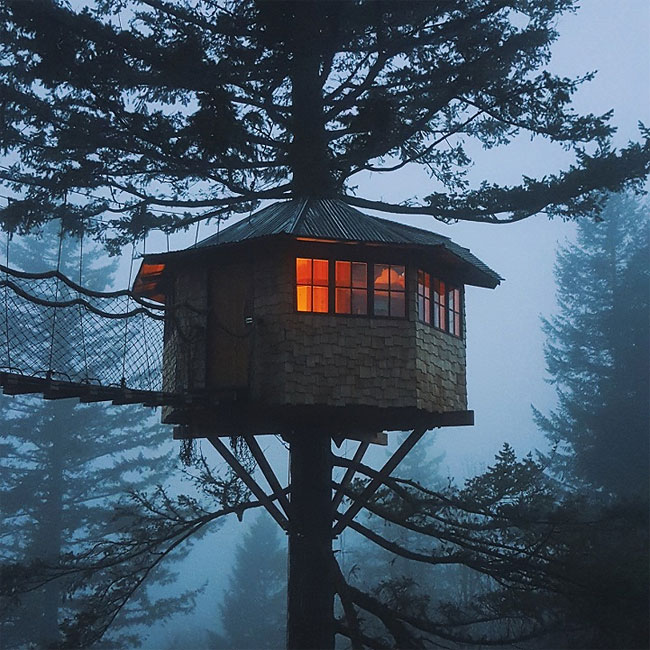 In 2011, Foster Huntington did something that many people only dream about. He quit his day job, bought a Volkswagen van, and escaped the urban jungle of New York City. Afterwards, he wandered the country and published multiple photo books, including one that’s aptly-titled Home Is Where You Park It. Huntington also introduced the popular hashtag #vanlife, and he inspired countless people with his beautifully-captured adventures. 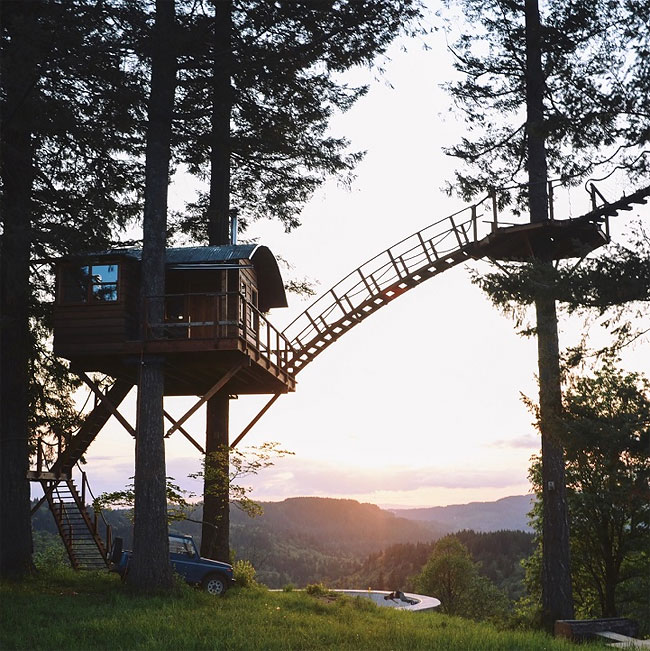 Three years of nomadic travels later, the 27-year-old decided to settle down. He and a group of friends got together and built a treehouse in western Washington near the Oregon border. Huntington’s home in the trees, which he has dubbed “The Cinder Cone” due to it being situated on a dead volcano, took a year to build. He filmed and photographed the construction and plans to publish the photos in a book; an interesting video documenting the process is below. 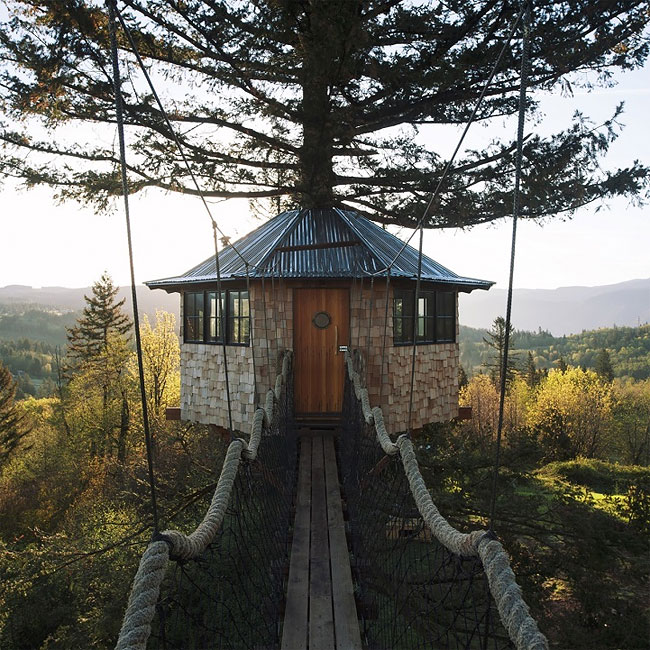 “I could’ve bought a house. But this is so much better. For me, it’s realizing a childhood dream.”, Foster told NY Times. 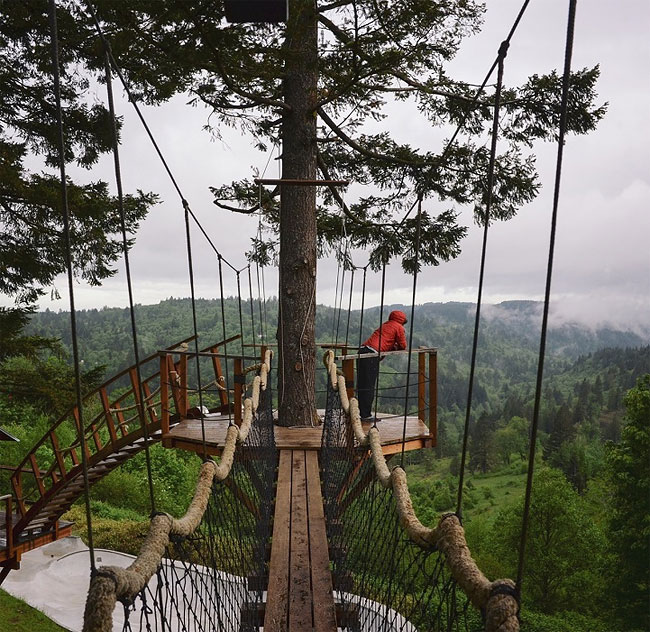 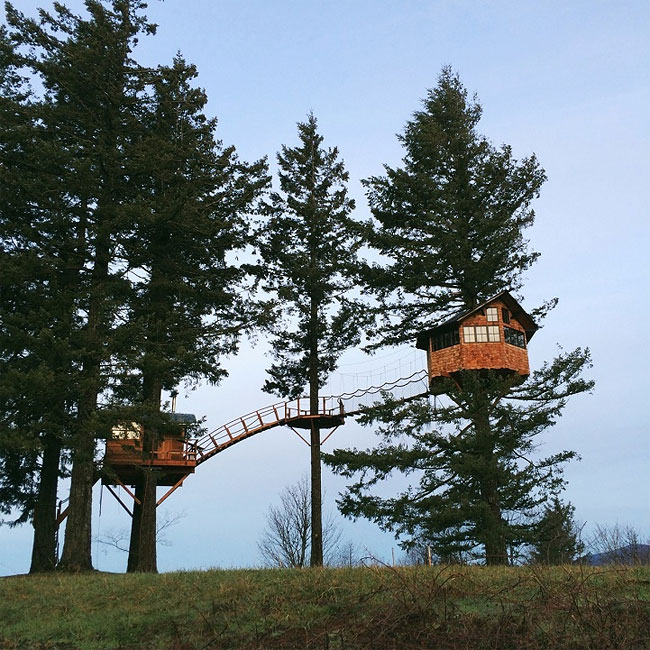 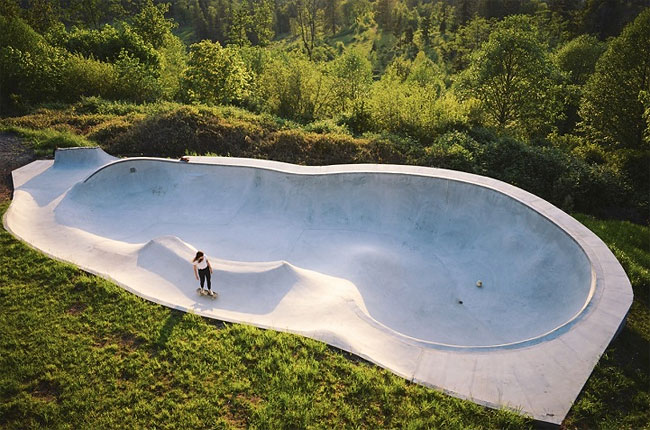 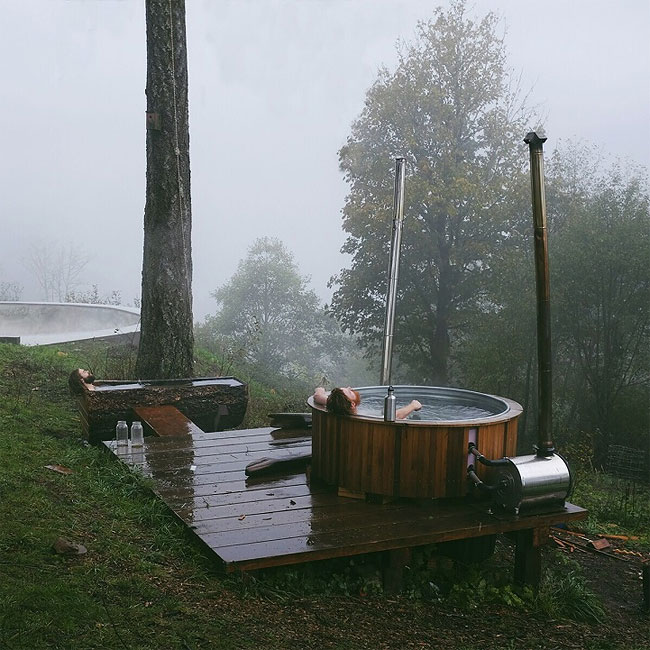 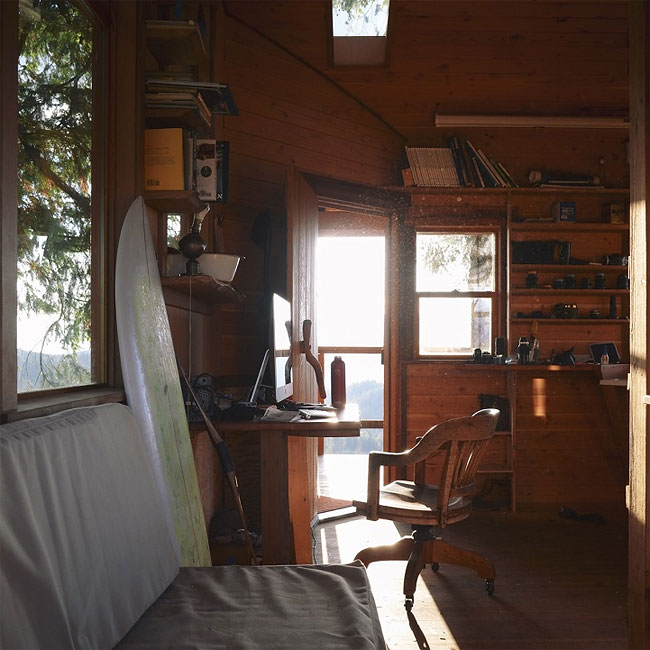 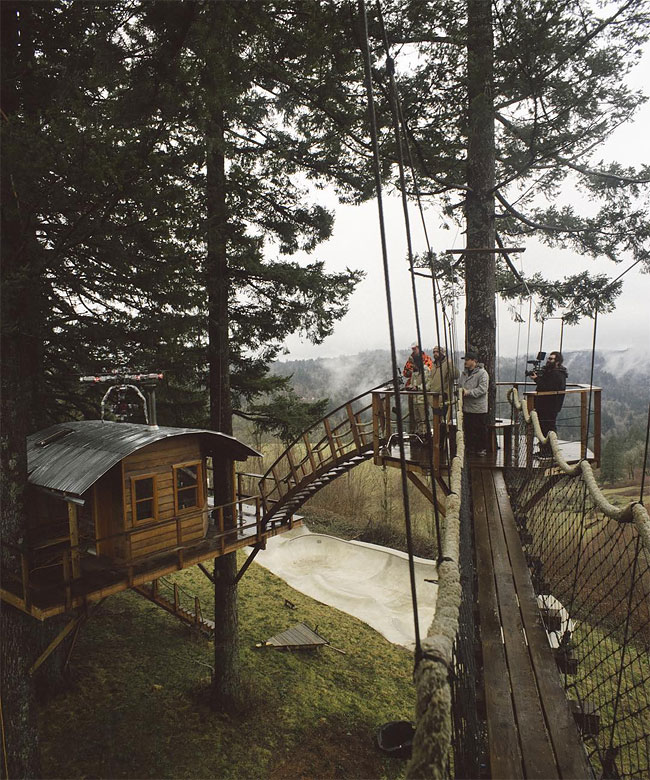 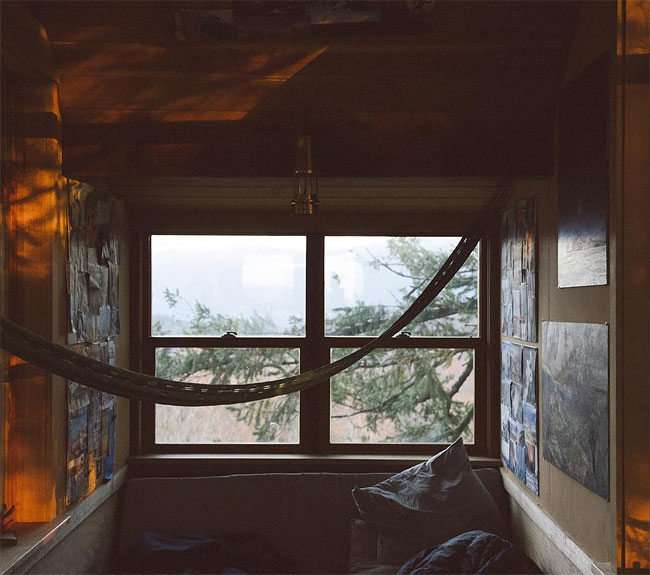 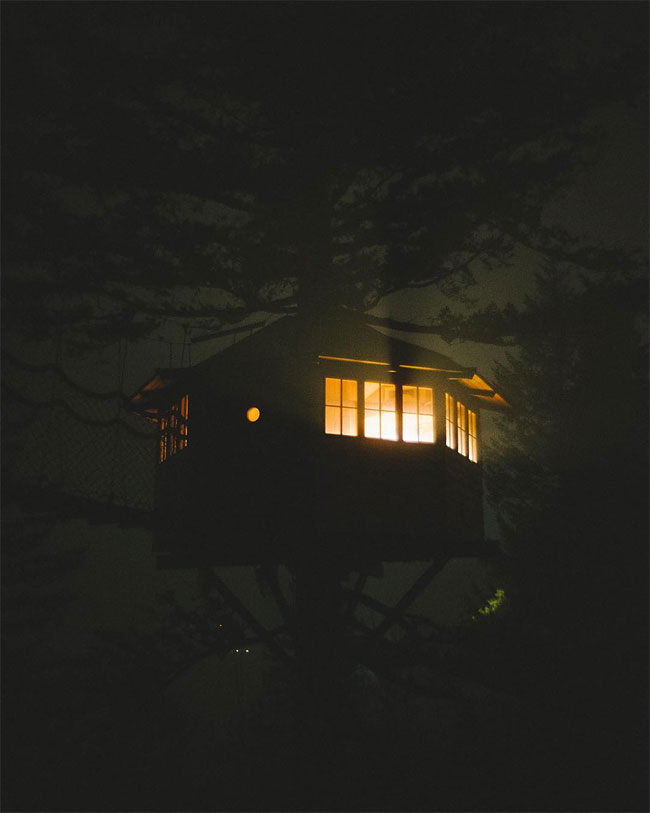 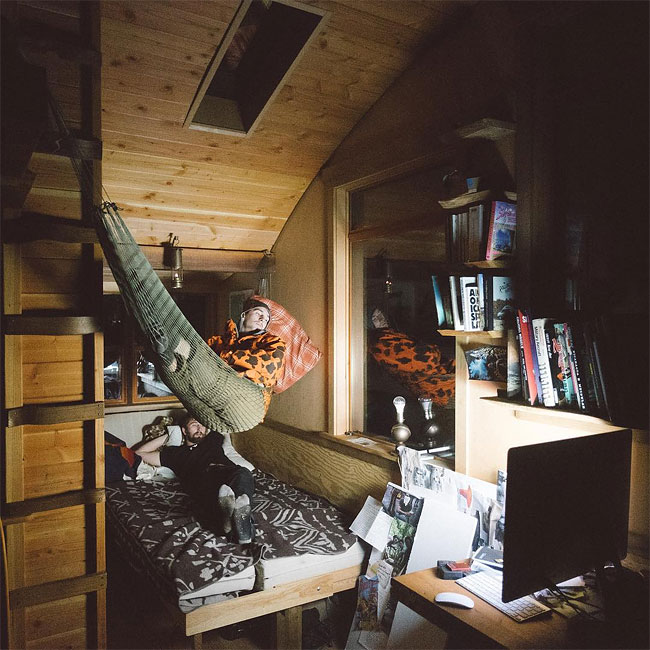 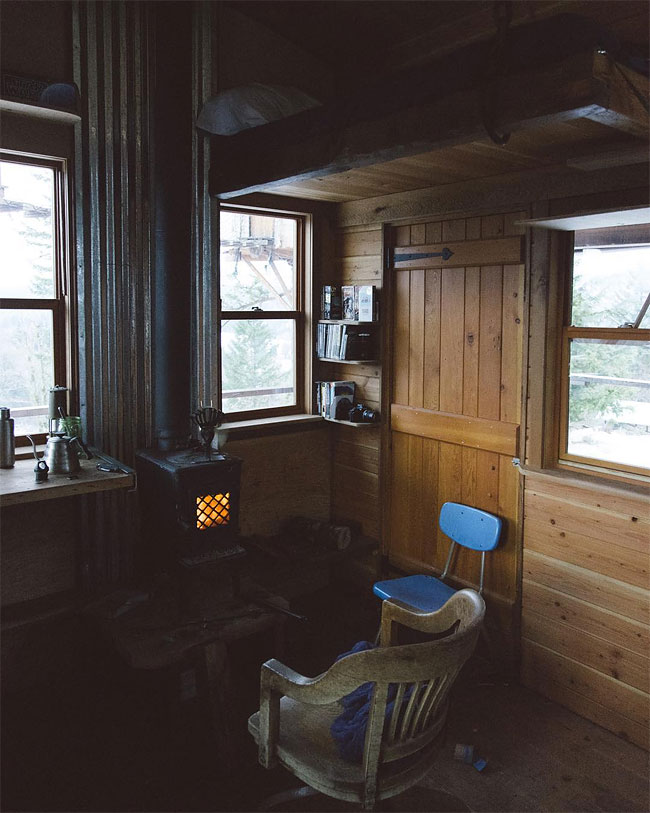 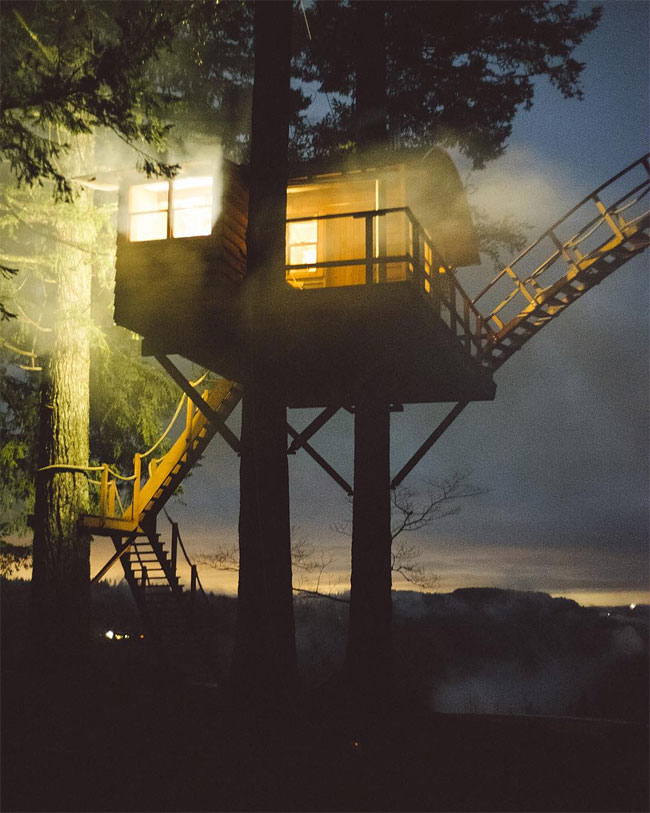 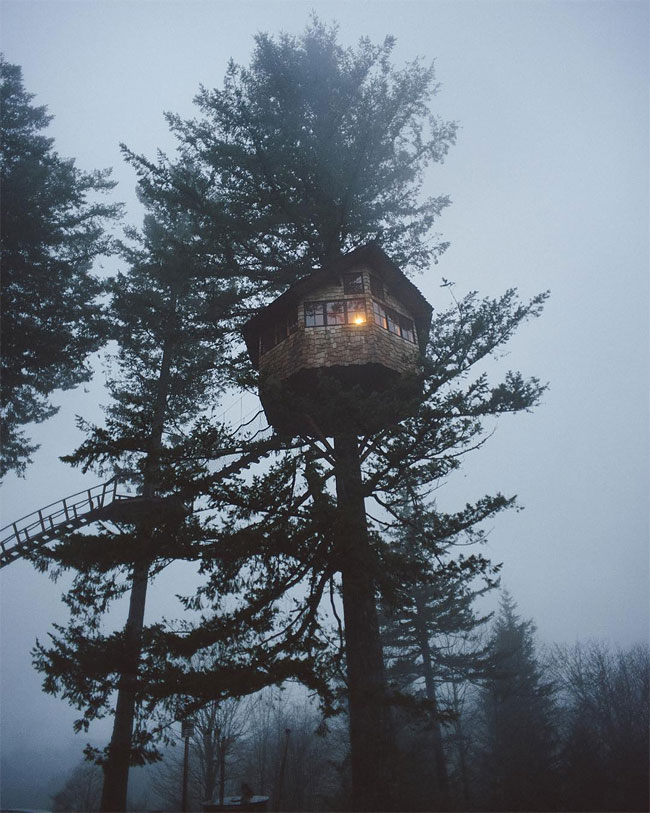 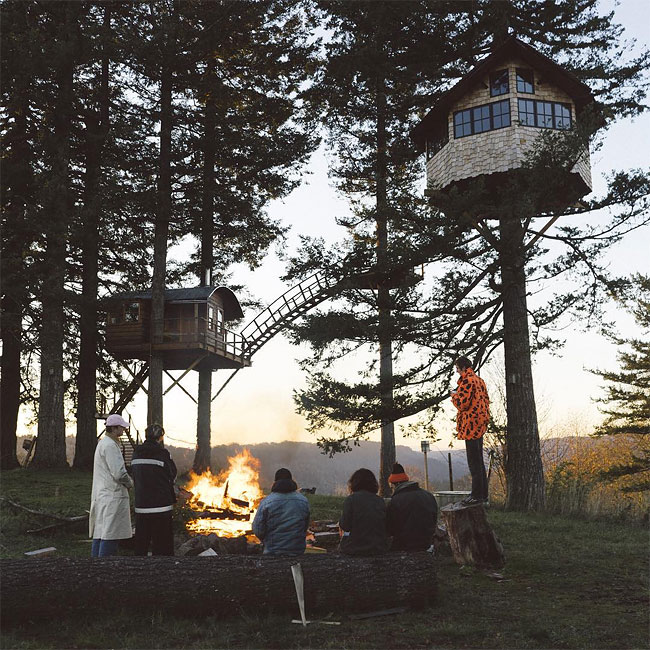 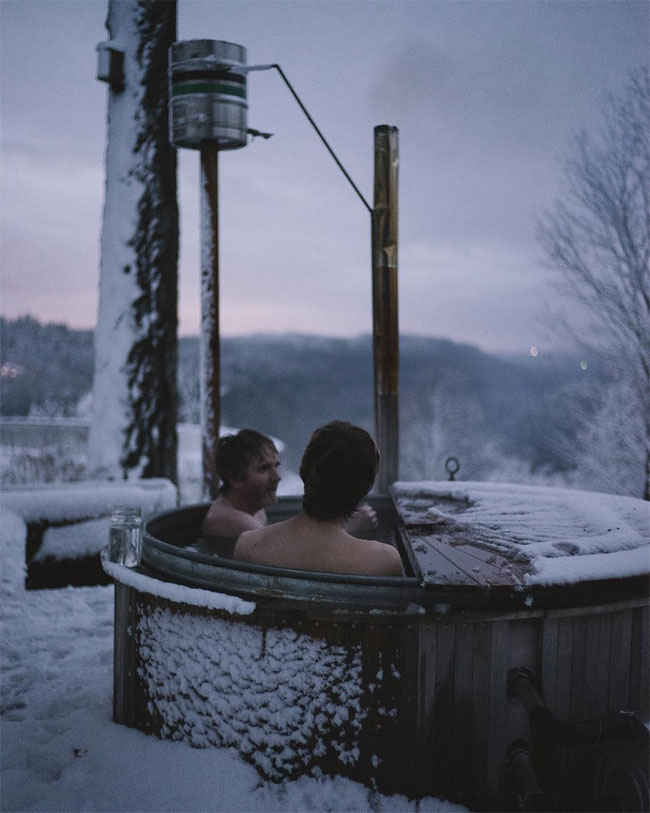 A Suspended Treehouse to Sleep with Birds
A Junkyard Of Classic Cars Located In Rural Georgia
This Photographer Has Captured Stunning Images Of America's Most Intense Storms From An Extraordinarily Close Perspective
Descend Into A Tomb Of Imprisoned Vehicles Frozen In Time
Futuristic Spiderweb Cocooned Trees Spotted In Pakistan
Bizarre Photographs of Thailand’s Buddhist Hell Garden
Brazil's Christ The Redeemer Statue Lit With Flags Of Countries Affected By Coronavirus
Young Garbage Pickers in India
Portraits Of Homeless People And Their Dreams Of Old
Creative Dad Builds ‘Star Wars’-Inspired Baby Furniture That’ll Blow You Away
This Guy Bought A Giant Plastic Godzilla, And Now They Travel Everywhere Together
Wonderland Abandoned: The Swift Fall of “Europe’s Biggest Theme Park”
GrelkaFest 2019: The Annual Bikini Ski Day In Siberia!
Otherworldly Pictures Of Northern Iceland
This New Zealand Street Is So Steep It Makes The Houses Look Like They're Sinking
Huge Cat Etched Into Peruvian Hillside Believed to Be Over 2,000 Years Old
“Childhood In The Raw Photos”: New Zealand Photographer Captured Her Children, Who Are Growing Up With Limited Electronics
Yao Ethnic Women Keep Long Hair Tradition Alive
Australian Traveller Captures Moment He Was Photobombed By Humpback Whale
Highways On The Runway? New Dress Designs Show Infrastructure's Chic Side
Sculptures All Over The World Are Currently Being Discovered With Medical Masks Affixed To Their Mouths - Please, Stop Doing This!!
The Nomadic Life of a Man who Lives in a Camper Van
The Pantone Cafe Serves The Colorful Meal Of Your Dreams
Ten Awe-Inspiring Routes You Need to Travel Along at Least Once in Your Life
builds, childhood, dreams, lucrative, quits, treehouse

Let's Travel from Toronto to Egypt, All within the UK
Probably, This Is The World’s Most Peaceful Toilet
Impressive and Tiny Villa on Dunbar Rock Opens in Honduras
Fly Geyser: A Collision Of Human Error And Natural Geothermal Pressure Created This Rainbow-Colored Geologic Wonder
This Man Spent 25 Years To Create The ”World Map” On The Banks Of Lake Klejtrup, Denmark
Wonderland Abandoned: The Swift Fall of “Europe’s Biggest Theme Park”
Man Takes the World’s Most Impressive Selfie. You Gotta See How Far He Climbed.
Ma'nene Ritual to Honor the Spirits of their Mummified Ancestors
Expressive Photos Of The Pillow Fight In Kiev, Ukraine
Loi Krathong Festival in Thailand
2007 ‒ 2022 by Design You Trust. Proudly hosted by WebHostingBuzz.
Privacy Policy · Terms of Service · Content Removal Policy ❤️ 🇺🇦