Adventurers Relax in Hammocks Hanging Hundreds of Feet Above Ground 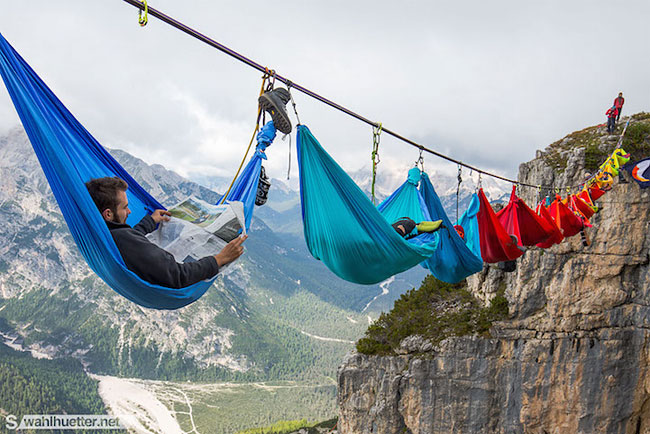 One century ago, fierce battles broke out in the shadow of Monte Piana in the Italian Dolomites as WWI began. The 18,000 young soldiers who lost their lives at that site were honored this past week at the 2015 Highline Meeting Monte Piana, an annual event that unites young people from all over the world through their shared passions for adventure and the sport of highlining. 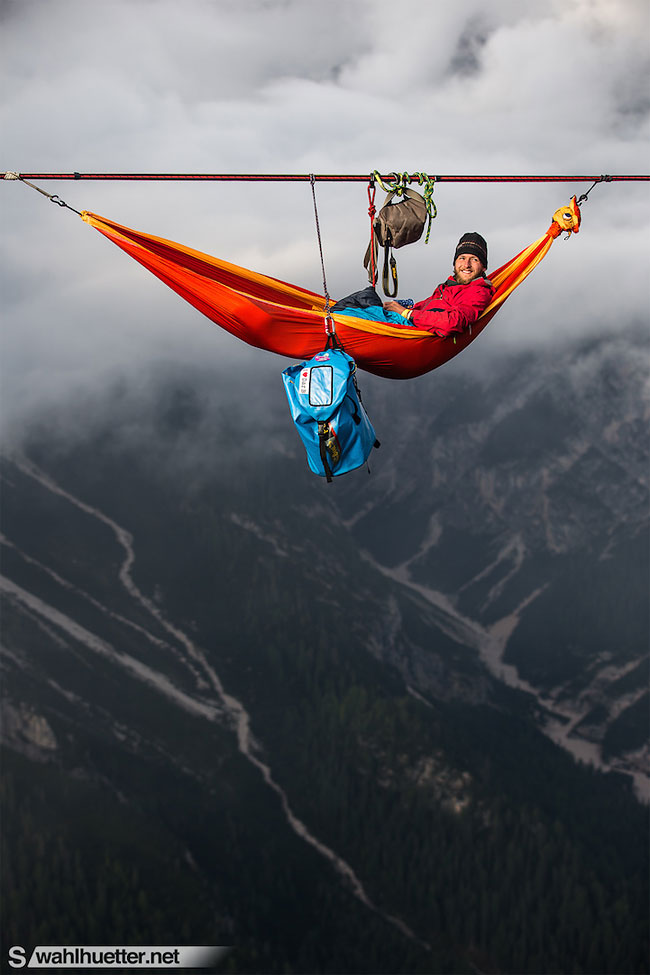 Since the first meeting was organized by co-founders Alessandro d’Emilia and Armin Holzer in 2012, thrill-seekers have gravitated towards the Dolomites each year for the chance to slackline between mountain peaks, hang out in hammocks suspended hundreds of feet above the ground, and meet like-minded people. 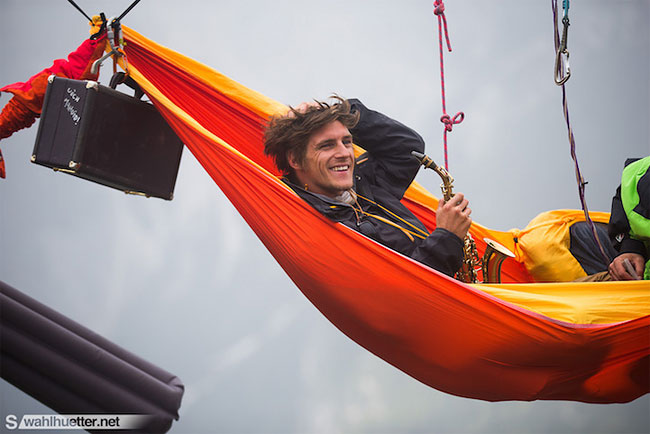 This time, however, the event was even more poignant because of the 100-year anniversary of the conflicts near Monte Piana. To remember those who died on the field a century ago, Ticket to the Moon coordinated a special “Rainbow Warriors” session as a symbol of peace and a tribute to the past. 26 athletes came together to sing, laugh, and lounge in 17 colorful hammocks strung up high in the sky. 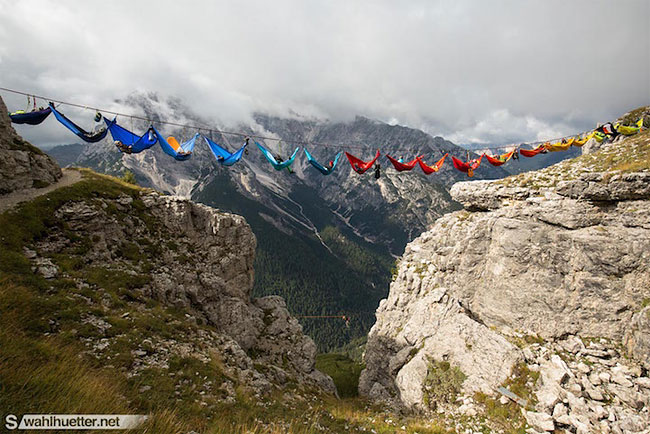 “Just a hundred years ago, winters up here were characterized by bombs, grenades, and lots of pain,” d’Emilia and Holzer explained. “Our idea was to re-experience Monte Piana in friendship and peace with each other, accompanied by kindhearted feelings during the day, and lulled to sleep at night by magical silence.” 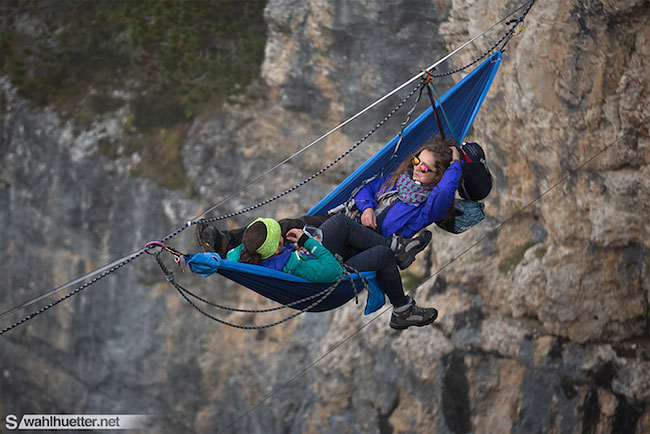 Like last year, Vienna-based photographer Sebastian Wahlhütter was there to photograph the Highline Meeting, which kicked off on September 10 and just wrapped up on September 15. Highlining, he told us, is an “incredible experience.” 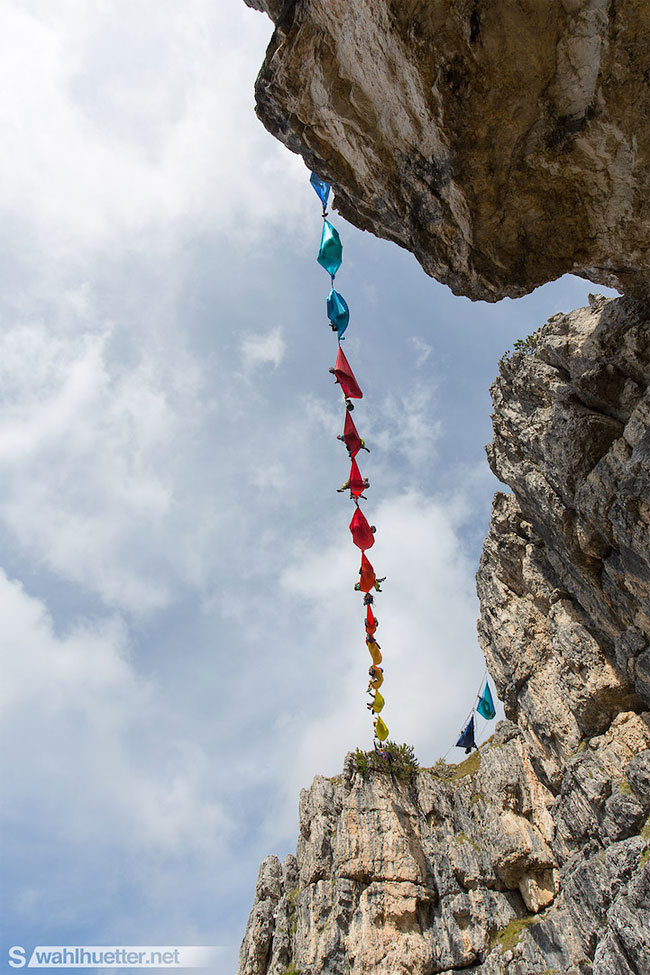 He shared: “I can remember the first time going to sit on a highline, and it was really an intense experience. Once you are in the hammock, it’s perfect, and you get a feeling of freedom; even though it’s so exposed, relaxing is not a problem.” 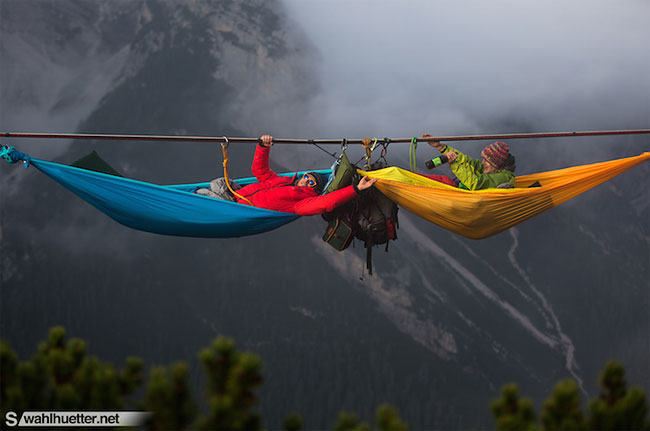 Overall, Wahlhütter says he’s grateful to be part of such a unique event. “This is a gathering and special experience for everyone participating,” he wrote to us in an email. “But the hammock action is also a symbol and a tribute to the past, and should remind us that there were also other times at this place when people were killing each other. In a way, the whole concept can also be reduced to ‘building bridges’ instead of fighting each other.” 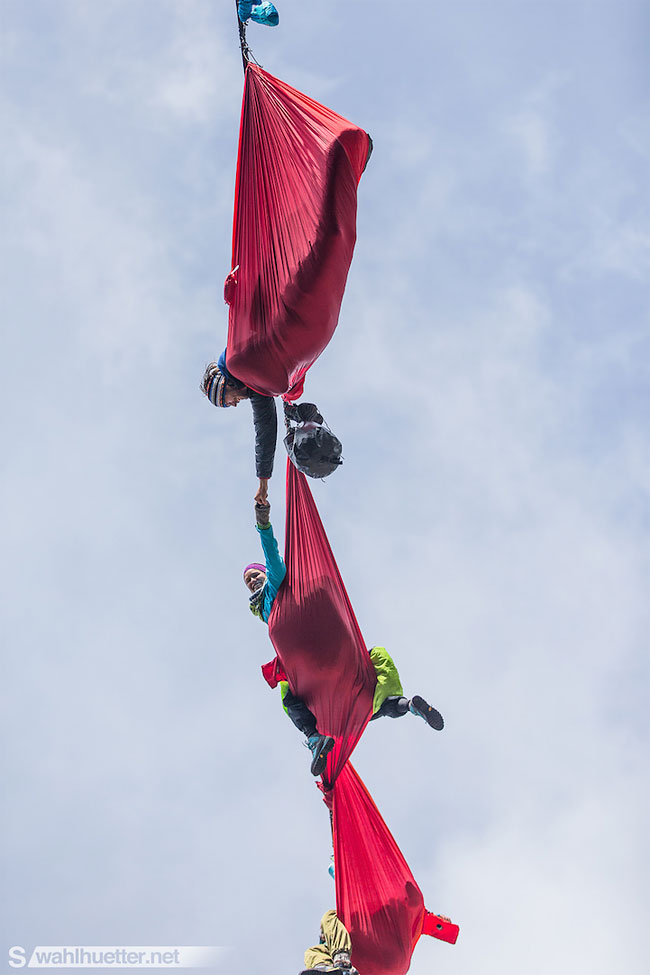 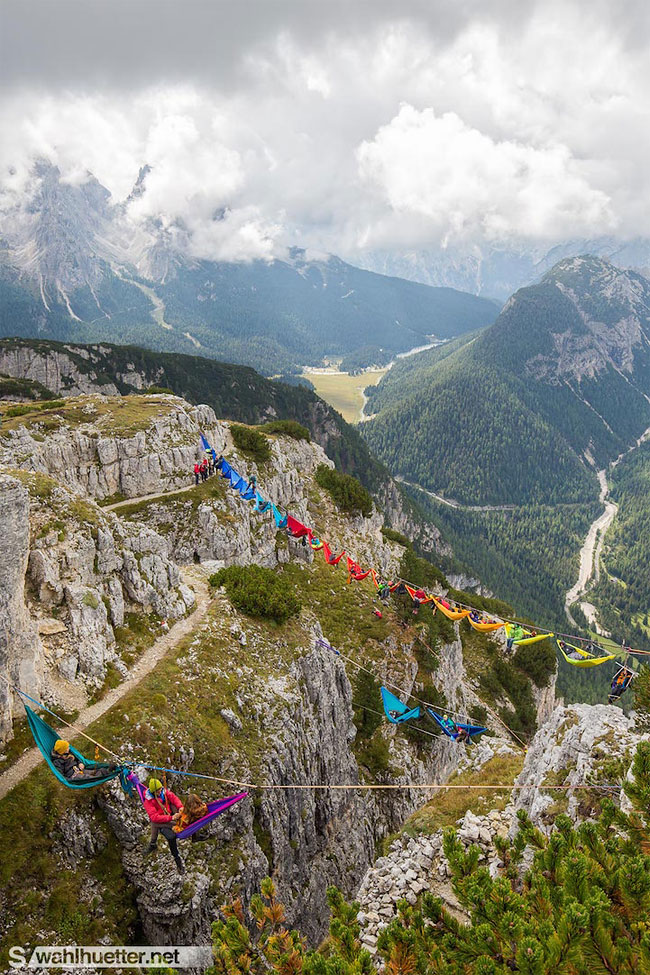 “Toro de Jubilo” - Fire Bull Festival in Medinaceli, Spain
Nomadic Photographer Lives, Works & Travels Solo In Her Trusty Teardrop Trailer
Hot Air Balloons at Cappadocia, Turkey
Pack All The Things! Here Is The Ultimate Burning Man Checklist
Fountains Of Saint Petersburg The Way They Look Now
Very Sharply Defined Rare White Curtain Auroras Seen Over Finland
My Fucking Restaurant Is Open For Business In Barcelona, Spain
18 Amazing and Rare Color Vintage Photographs of Disneyland in 1955
The Earth From Space Through The Eyes Of French Astronaut Thomas Pesquet
Underwater Wedding in Bora-Bora
Buddhist Novices Transform Into Princes In Initiation Ceremony
Extreme Surfing On Arctic Circle
People Of The World: Māori In Stunning Photographs By Jimmy Nelson
Buddhist Monk Makes Footprints In Wooden Floorboards Through 20 Years Of Prayer
The Kings Of The Forest - Photographer Spent 3 Days In Nepal To Document The Isolated Tribe
Terrifying Photos From Streets Of China Covered With A Deadly Fog
Iceland From Above In Breathtaking Aerial Photography By Gabor Nagy
This Public Toilet At The Central Bus Station In Russian Voronezh Is So Romantic They Lit Candels In It
The Deserts Of Argentina Take On A Starring Role In This Photographer’s Breathtaking Milky Way Shots
This Guy Bought A Giant Plastic Godzilla, And Now They Travel Everywhere Together
Probably, This Is The World’s Most Peaceful Toilet
This Bright Pink Bubble-Gum Lake Can Perk Up Your Diet
North Carolina's Abandoned 'Wizard of Oz' Theme Park Will Haunt You
The Story Of David Glasheen, A Real Life Robinson Crusoe
above, adventurers, hammocks, hanging, hundreds, relax

Moscow vs New York: Visual Comparison Of Two Big Cities 45 Years Ago
Olympus Mons - The Largest Volcano in The Solar System
Halloween-Obsessed Couple Build 'Doll Asylum' By Filling Home With Mutilated Toys
A Real-Life Yellow Submarine for Rent
You Can Rent Out this Eerie, Abandoned Wizard of Oz Theme Park
Abandoned Asbestos Mines Still a Hazard in India
These Architects Wanted To Work Outside, So They Made A Mobile Office In A Caravan
The Dubai Miracle Garden That Was Essentially Built On A Desert
A Rare Look Inside North Korea
"The Last Days Of Martinique": Rare Portraits Of Martinique Residents Before The Deadly Volcano Eruption In 1902
Source of inspiration since 2007. Proudly hosted by WebHostingBuzz.
Privacy Policy · Terms of Service · Content Removal Policy 🇺🇦 ❤️