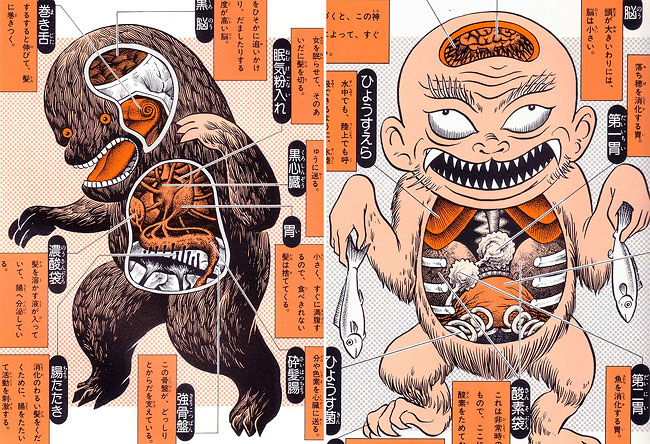 In 1960, the great manga artist Shigeru Mizuki took on the task of illustrating anatomical versions of over 80 monstrous members of the yōkai—a group of monsters who, according to Japanese folklore, inhabit the countryside of Japan. 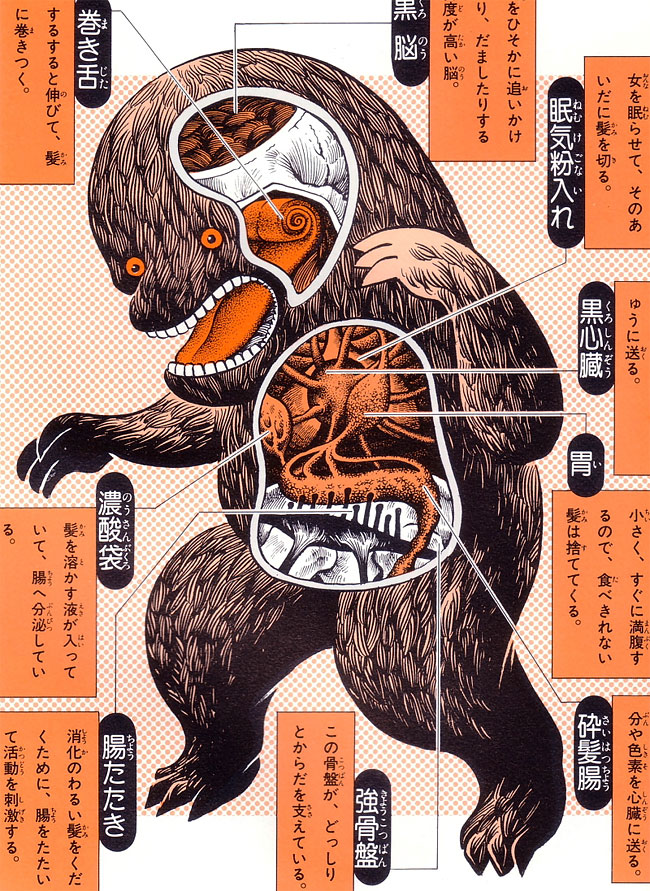 “Doro-ta-bō” – the “muddy rice field man.” Anatomical features include a gelatinous lower body that merges into the earth, a ‘mud sac’ that draws nourishment from the soil, lungs that allow the creature to breathe when buried. 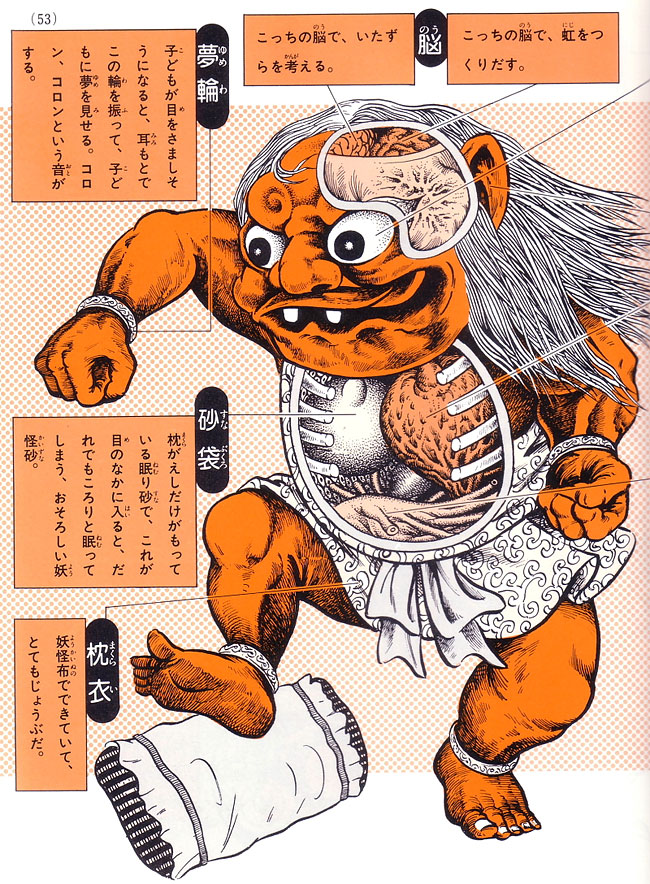 The Makura-gaeshi (“pillow-mover”) is a soul-stealing prankster known for moving pillows around while people sleep. The creature is invisible to adults and can only be seen by children. 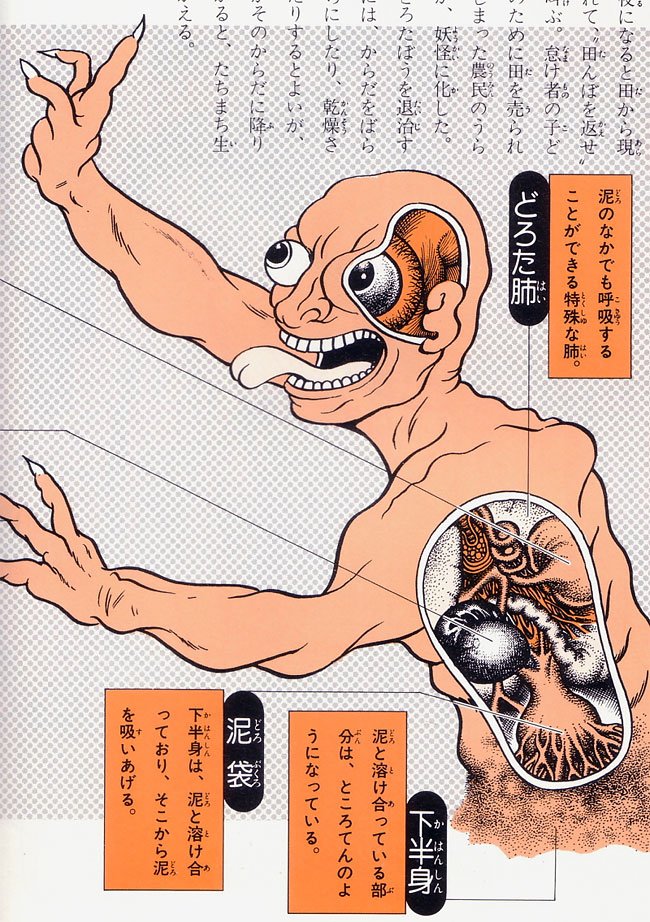 The Doro-ta-bō (“muddy rice field man”), a monster found in muddy rice fields, is said to be the restless spirit of a hard-working farmer whose lazy son sold his land after he died. The monster is often heard yelling, “Give me back my rice field!” 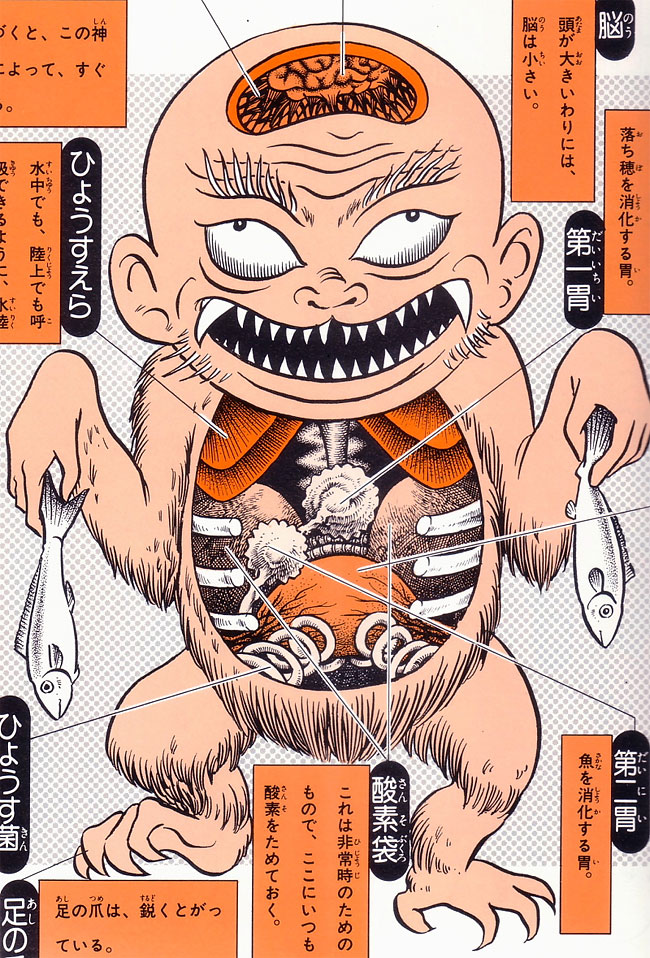 “Hyōsube” a child-sized river monster that lives in underwater caves. Anatomical features include a pair of rotating bone coils produce an illness-inducing bacteria that the monster sprinkles on unsuspecting humans. 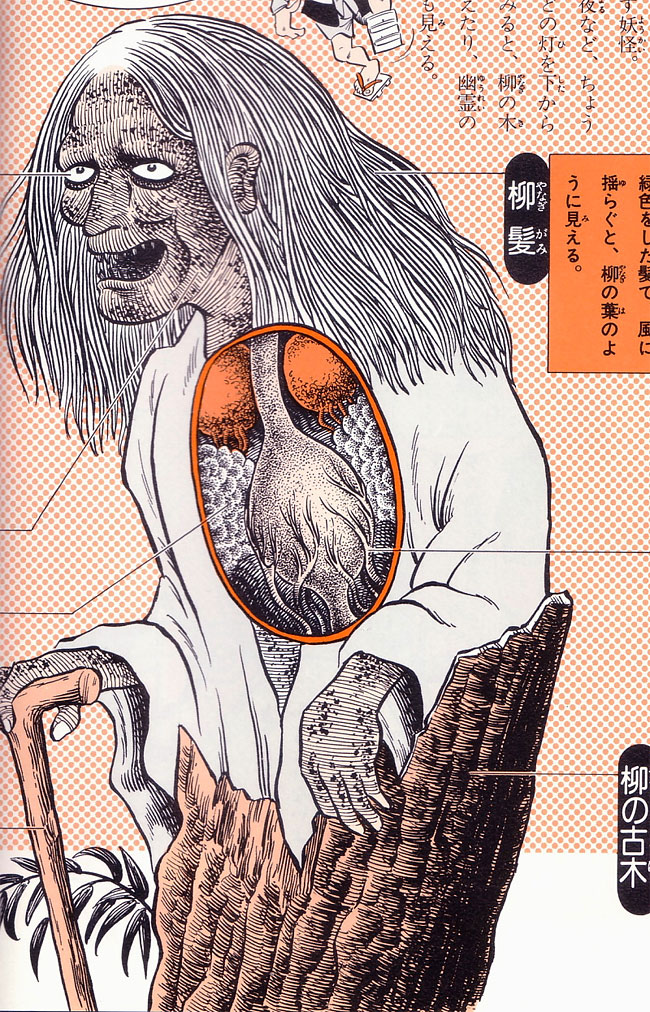 “Yanagi-baba” – the “willow witch” is the spirit of a 1,000-year-old willow tree. Anatomical features a stomach that supplies nourishment directly to the tree roots. 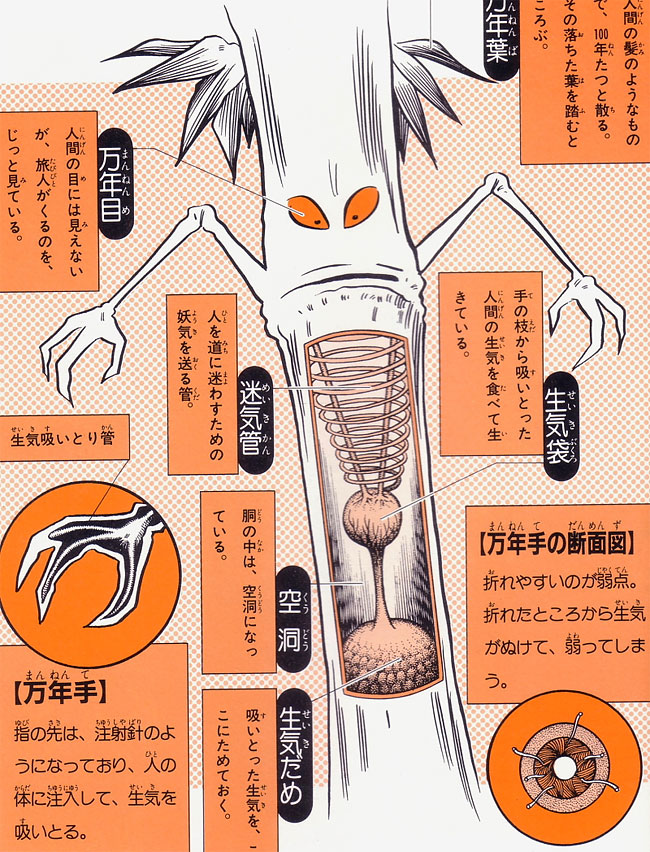 “Mannen-dake” – the “10,000-year-old bamboo monster.” Anatomical features include syringe-like fingers the monster inserts into victims to suck out their souls, and a sac that holds the stolen souls. 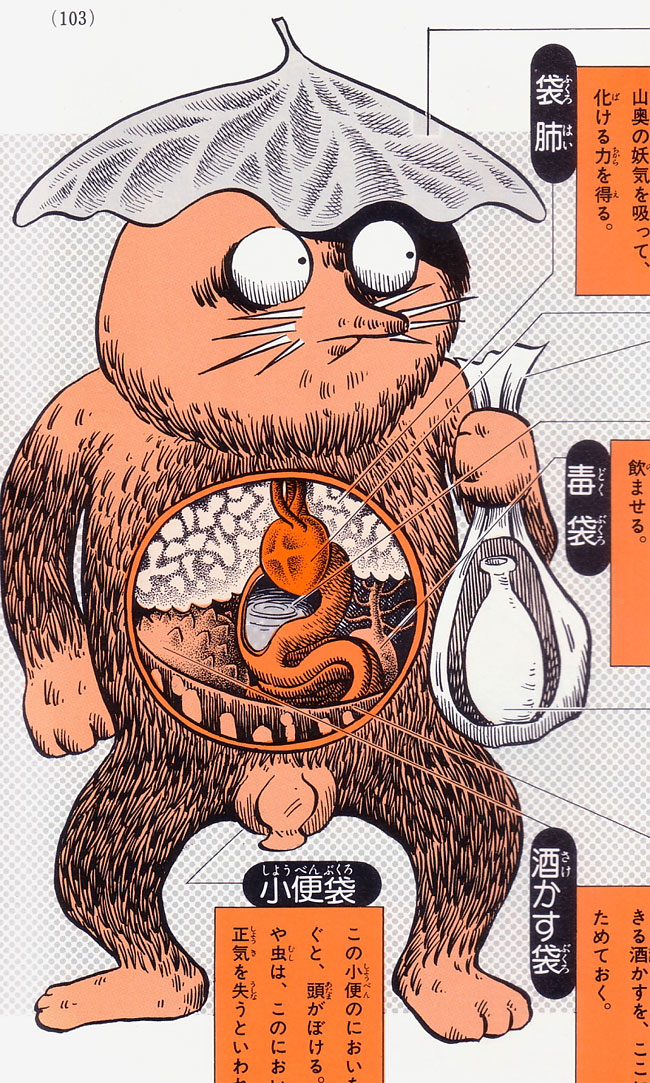 “Fukuro-sage” a type of “tanuki” or “raccoon dog” that can shape-shift into a sake bottle. Anatomical features include a stomach that turns food into sake, a sac for storing poison that it mixes into drinks. 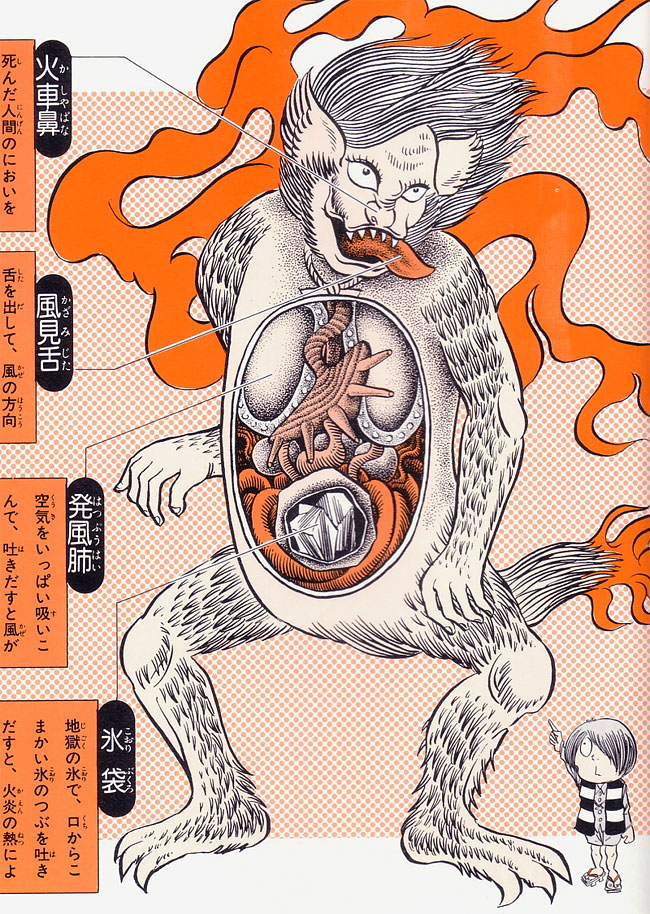 “Kasha” the “messenger of hell” known for causing typhoons at funerals. Anatomical features include powerful lungs for generating typhoon-force winds that can lift coffins and carry the deceased away, as well as a nose for sniffing out funerals. 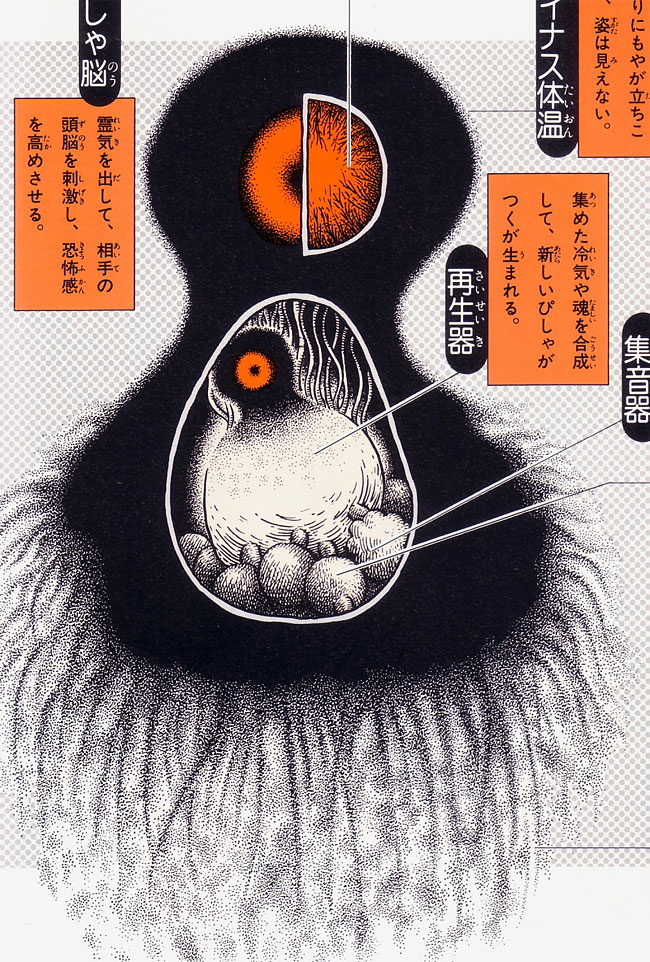 “Bisha-ga-tsuku” — a soul-stealing creature. Anatomical features include feelers that inhale human souls and cold air, a sac for storing the sounds of beating human hearts, and a brain that emits a fear-inducing aura. 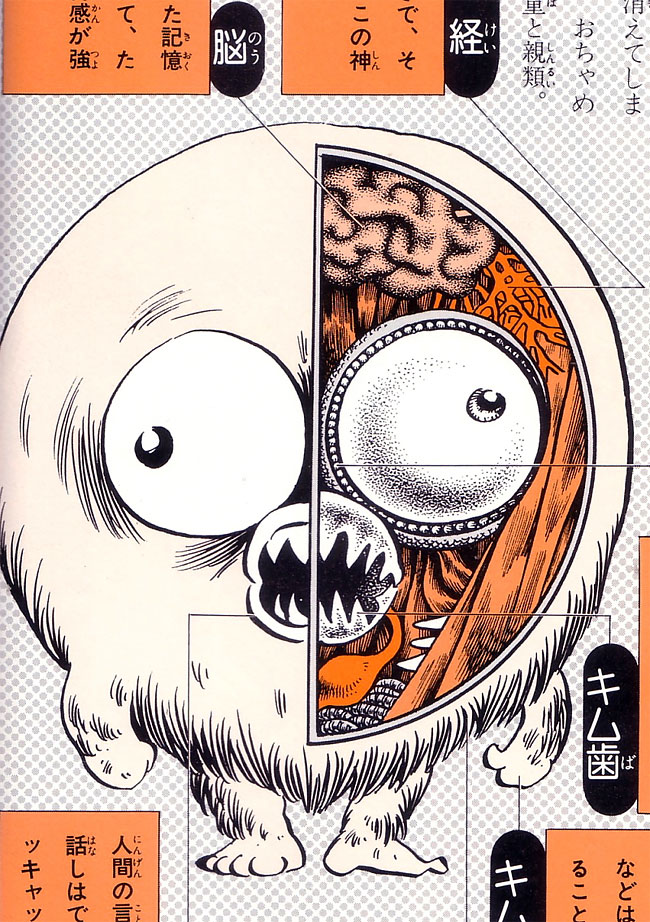 “Kijimunaa” a playful forest sprite that lives in the top of banyan trees. Anatomical features include eye sockets equipped with ball bearings that enable the eyeballs to spin freely.