The English language is full of slang all about the world of money. Whether we’re using a credit card and putting something ‘on plastic’ or complaining that a new TV will cost you ‘an arm and a leg’, we love getting creative when we’re talking about cash.

Of course, if taken literally, any slang can be confusing for tourists and international students trying to work their way around the local lingo. So, for a bit of fun, we decided to see what slang is used around the world to refer to the coins, notes, and money different countries use.

giffraff teamed up with the award-winning British illustrator, Paul Blow, to create some funny illustrations that show how it literally looks to non-native speakers! 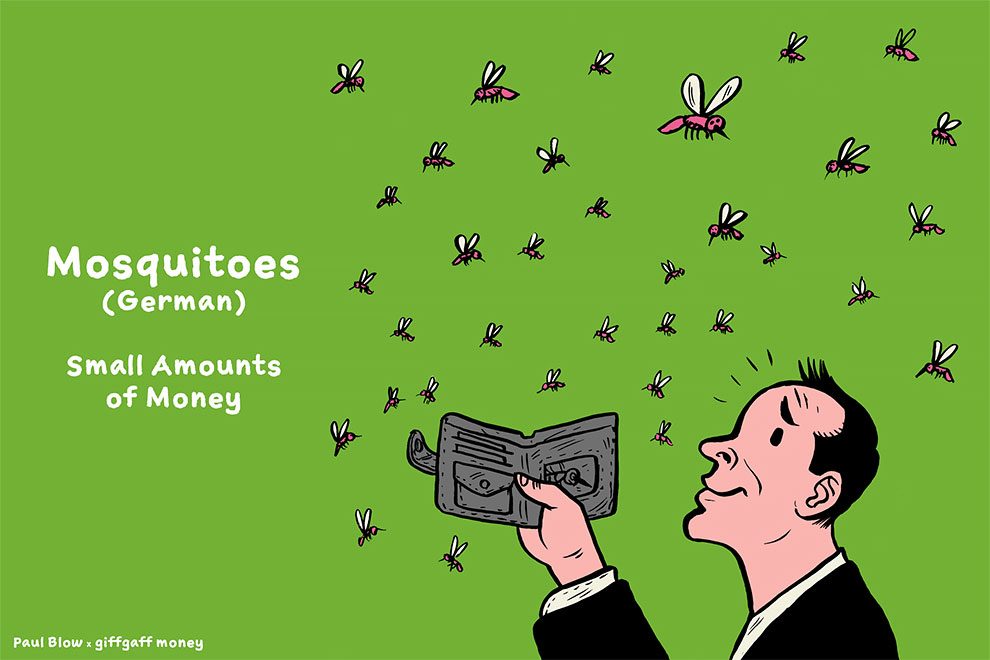 In Germany, you may hear the word “mücken” (mosquitoes) when it comes to talking about cash, though they may also say “kohle” (coal) or “schotter” (gravel). 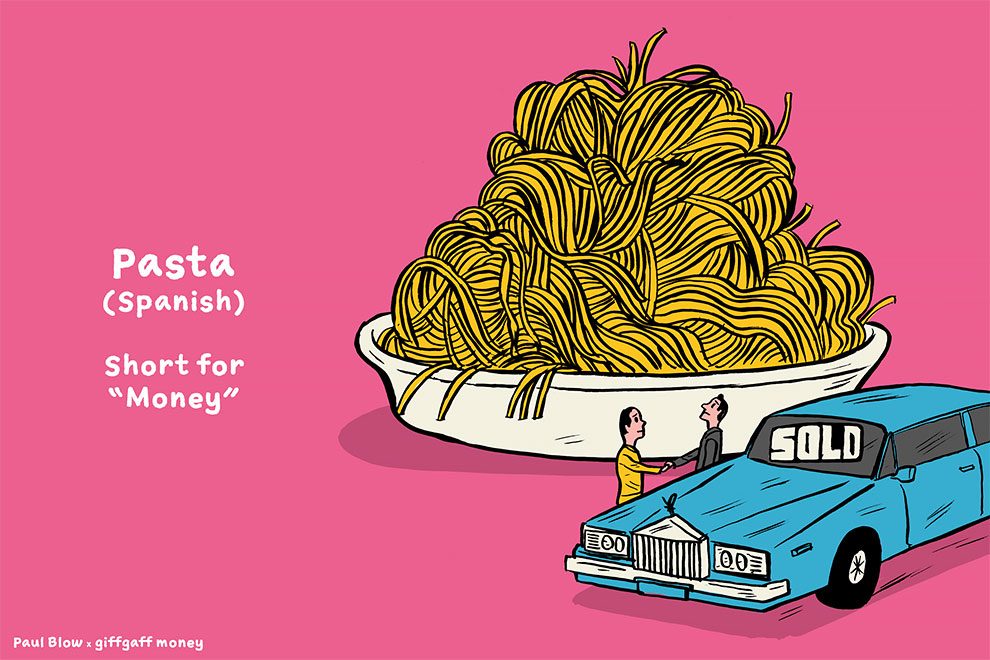 Spain is one of the many countries that adopted the Euro, meaning a lot of their slang from the days of using pesetas has died out, though “pasta” remains a popular term. 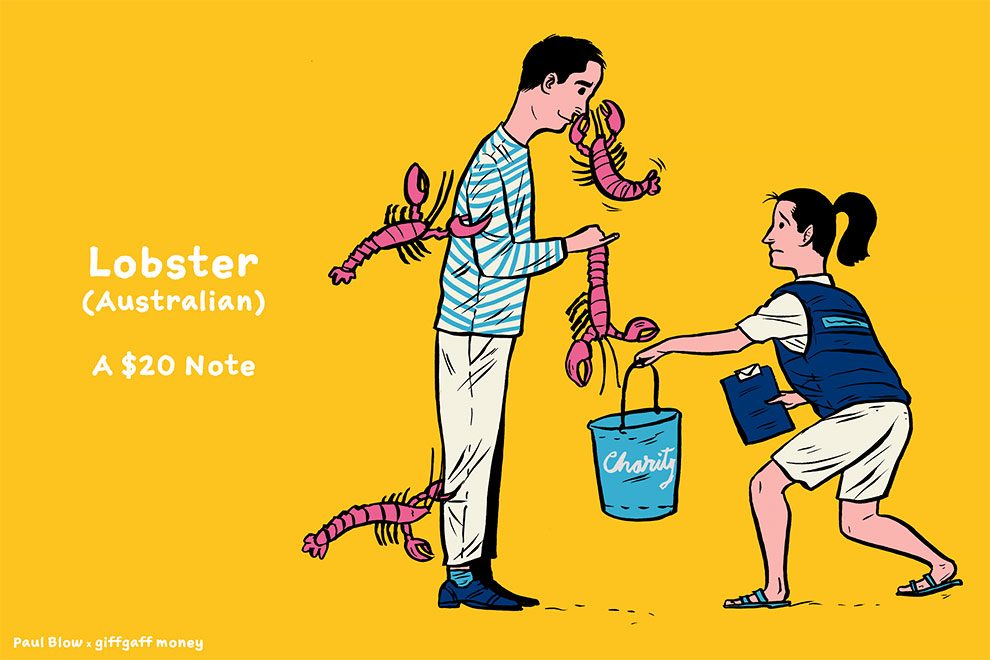 Australians love to get colourful with their slang, calling their $20 note a “red lobster”, and their $5 and $10 notes “pink ladies” and “blue swimmers”, respectively, due to the colours of the notes themselves. 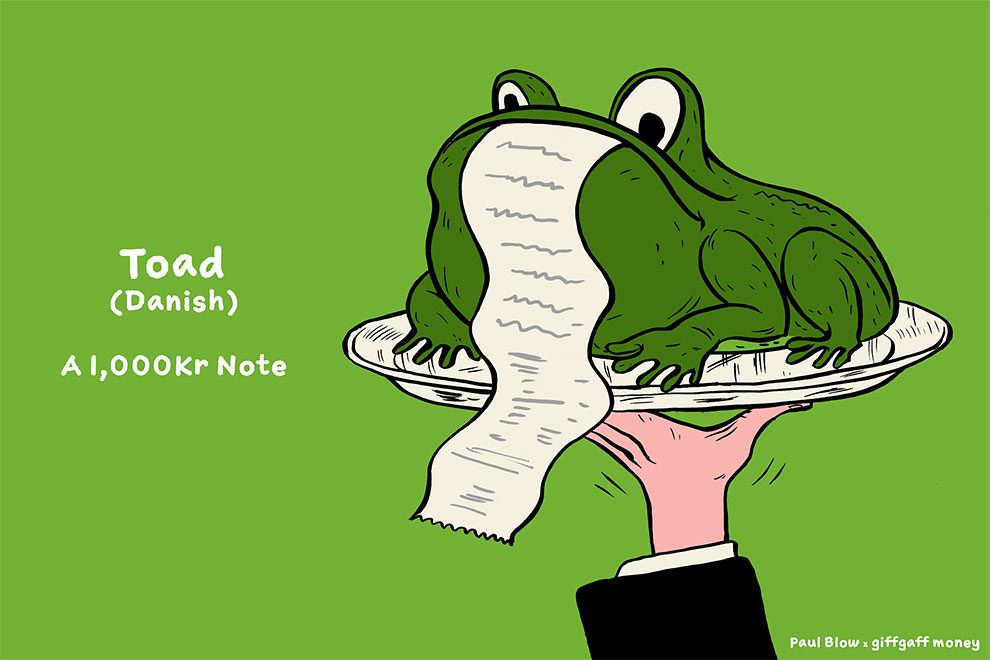 Home of the Krona, the Danish words for their ‘hundred’ and ‘thousand’ notes are shortened down to give their money slang an animal twist. “Hundrede” becomes ‘hund’ (dog) and “tusind” becomes ‘tudse’ (toad)! 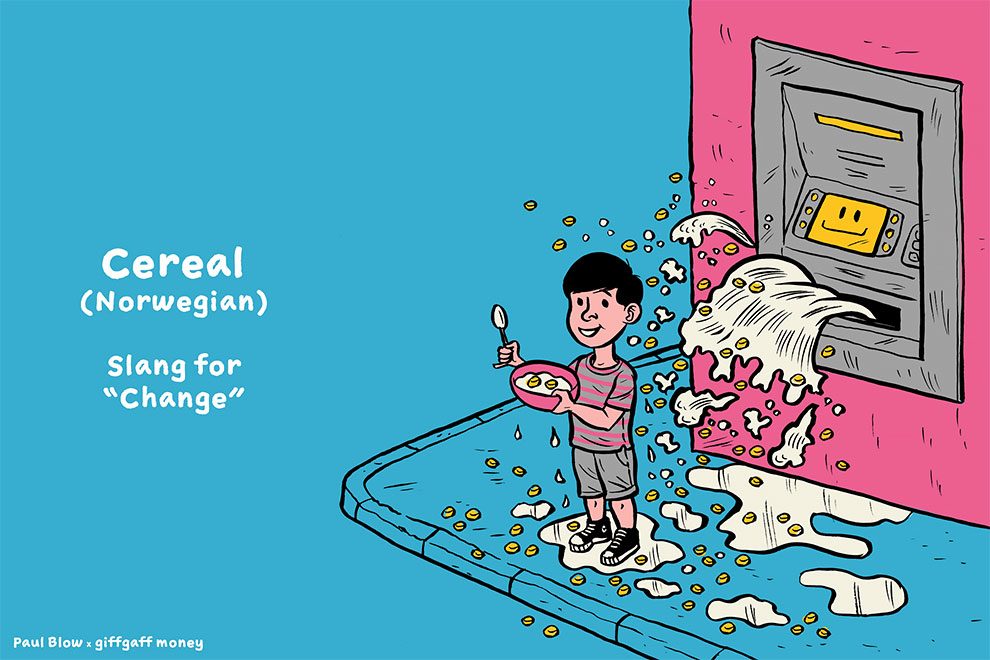 Norway also uses the Krona as their currency, though ditches the use of dogs and toads in favour of “gryn” (cereal) and “stål” (steal) to talk about their cash. Their 1,000Kr note is also called “laken” which means ‘bed sheet’. 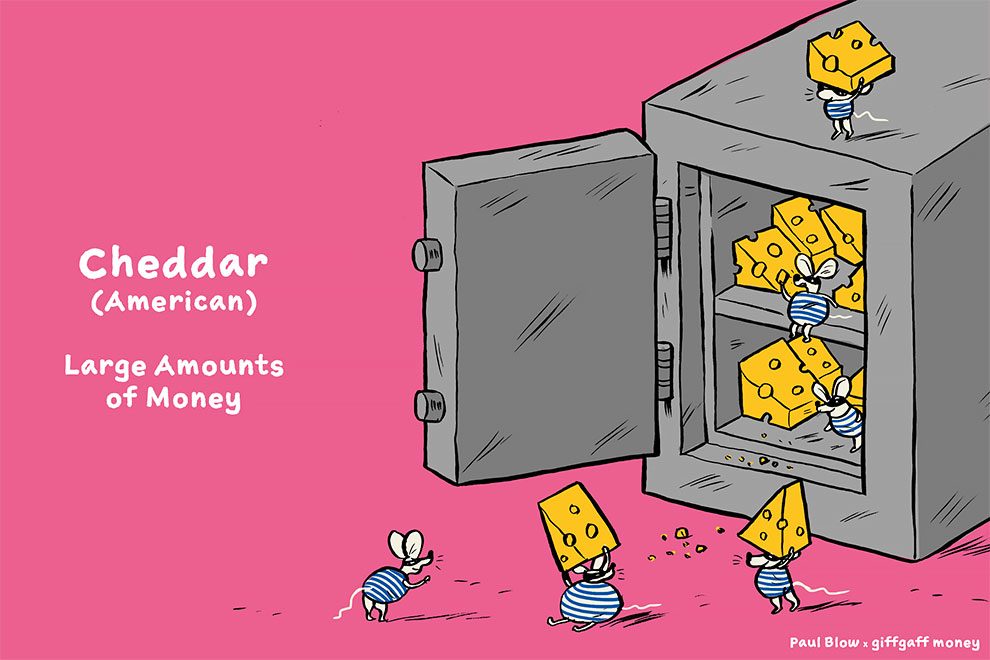 Americans seems to have food on the brain when it comes to their slang, as you may hear “cheddar”, “dough”, or “clams” used (particularly when enjoying a large windfall). 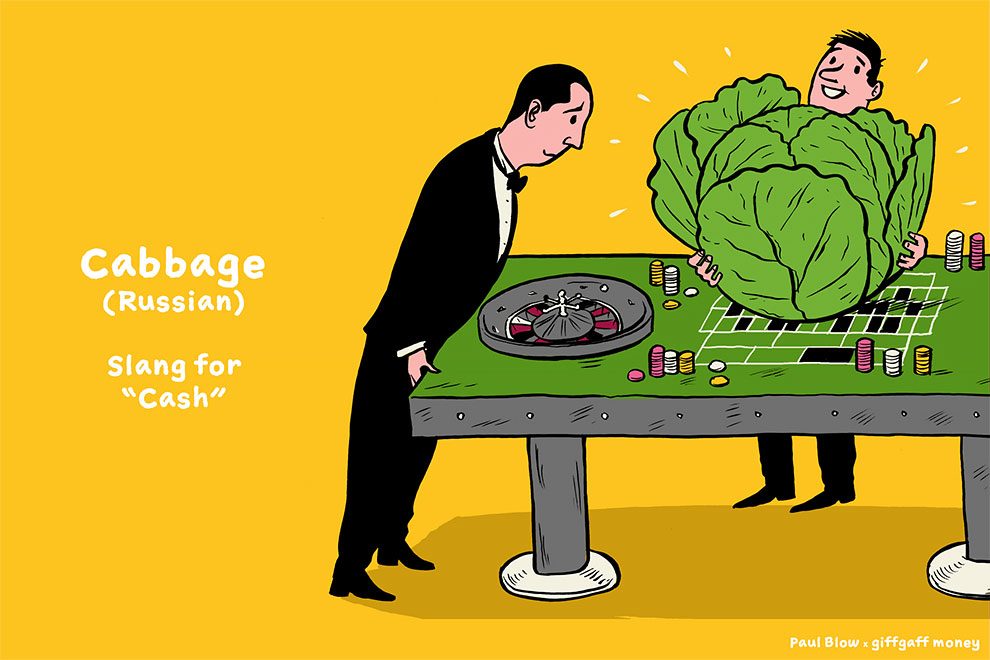 Food is also a source of some great terms from Russia, who lend both ‘cabbage’ and ‘lemon’ to the conversation. 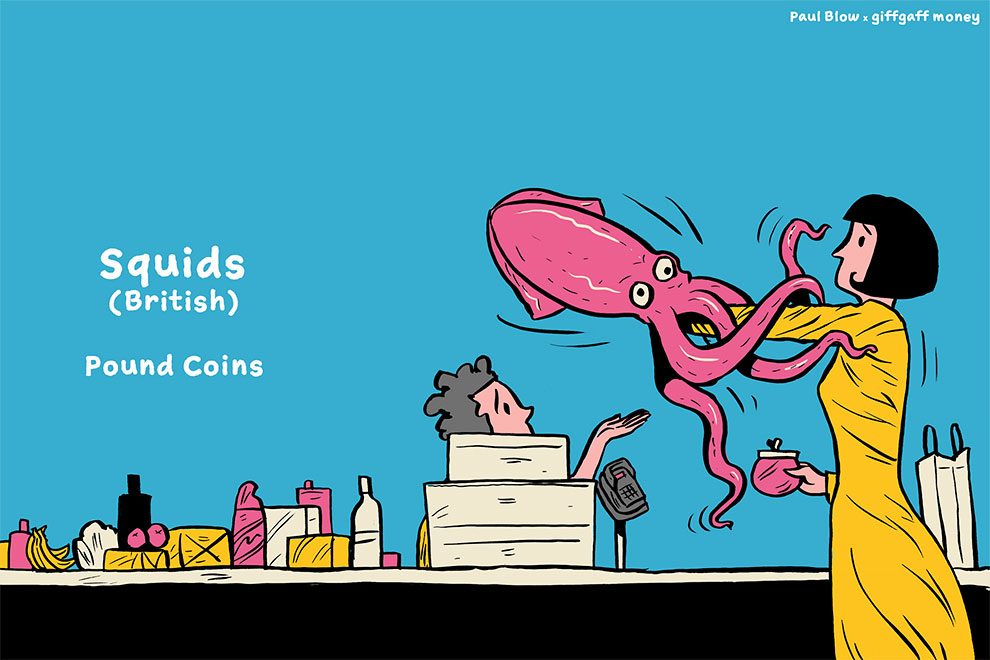 As we said earlier, we’ve got a wealth of ways to talk about the cash we’re carrying. One of our personal favourites is ‘squids’, though that could paint an unusual picture for anyone unfamiliar with it.

Cyberpunk 2077 Posters That Don't Offend Anyone
Skoda Fabia – The Original Cake Car
More Than Football: A Serie Of 25 Posters To Celebrate The UEFA Euro 2016 Tournament
Photographer Creates Imaginative Images Of Her Daughter And Her Shadow
Guy Uses Modern Software To Restore The Faces Of Julius Caesar And 23 Other People From Ancient History
Artist Sculpts Waves On Driftwood
Guy Hilariously Trolls IKEA By Installing A Fake “Relationship Saving Station”, And It Might Just Save Your Marriage
Syrian Artist Paints World Leaders As Refugees
Illustrations, Lettering and Typographic Design by Huston Wilson
Intriguing Female Portraits by Ilya Ozornin
Japanese Illustrator Asteroid: Wandering Through The Ruins Of The Future
Amazing Vintage Photos Of Betty Broadbent, The ‘Tattooed Venus’ From The Late 1930s
This German Artist Creates Cartoons And Comic Series About Travel Adventures And Cultural Discoveries
Artist Creates Illustrations That Turn Loneliness Into Magic
This Fashion Santa Is Blowing Up The Internet With His Dashing Looks
Nevermind: Dreamy, Mysterious and Surreal Art Works of Paul Rabaud
Someone Spotted That David Bowie Often Looked Like A Sea Slug, Created An Entire Blog To Prove It
Winerelle Painting: Amazing Wine Arts by Sanja Jankovic
This Illustrator Draws Everyday Situations That Are So Familiar It’s Like Looking in the Mirror
Food Artist Hellen Die Pays Tribute To Alien For Her Thanksgiving Dinner
Kids vs Superheroes
Together We Are Strong!: An Anonymous Author Created the NFTs to Help the Ukrainian Forces
How To Become a Cat: The Complete Guide
Sleek, Masculine, and Cheerful Pin-Up Superheroes and Ordinary Males by David Talaski
artist, illustrated, money, slang, smartly, terms