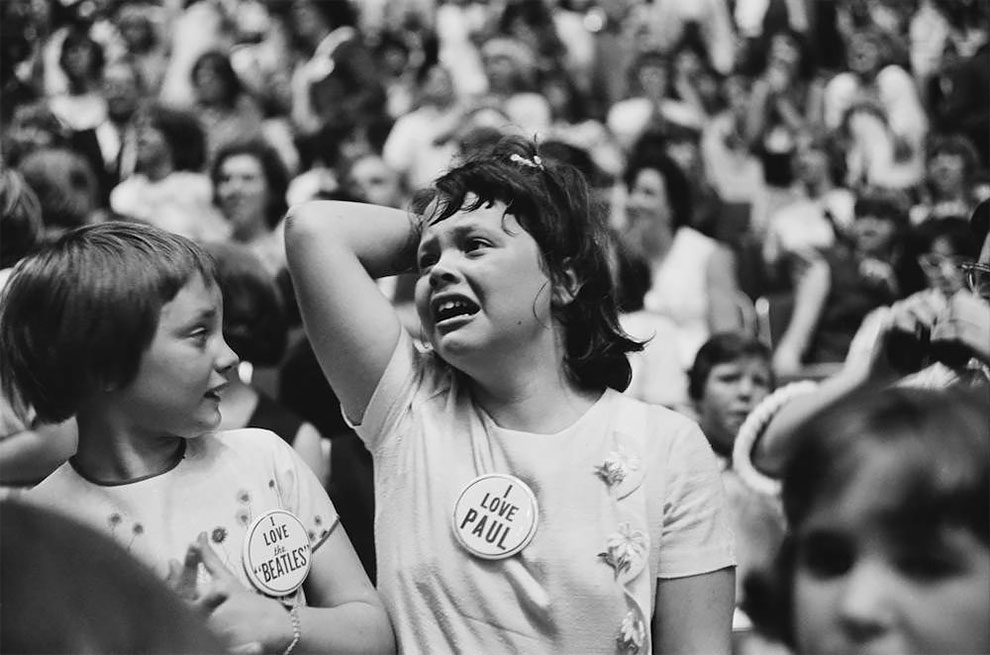 Were you there? Did you scream hysterially as The Beatles, The Rolling Stones, The Osmonds, The Bay City Rollers, or one of the dreamy Davids – Dave Clarke, David Cassidy, David Essex and David Bowie – performed? Was that you being led away in a state of ecstatic hysteria out as Charlie Watts carried on regardless? Did you ‘Love Paul’?

If you or someone you know appears in any of this gallery, do let us know. Did you recover from the rock-induced rapture? Or does Dave or any surviving member of one of the ‘Thes’ make you gibber and wail? 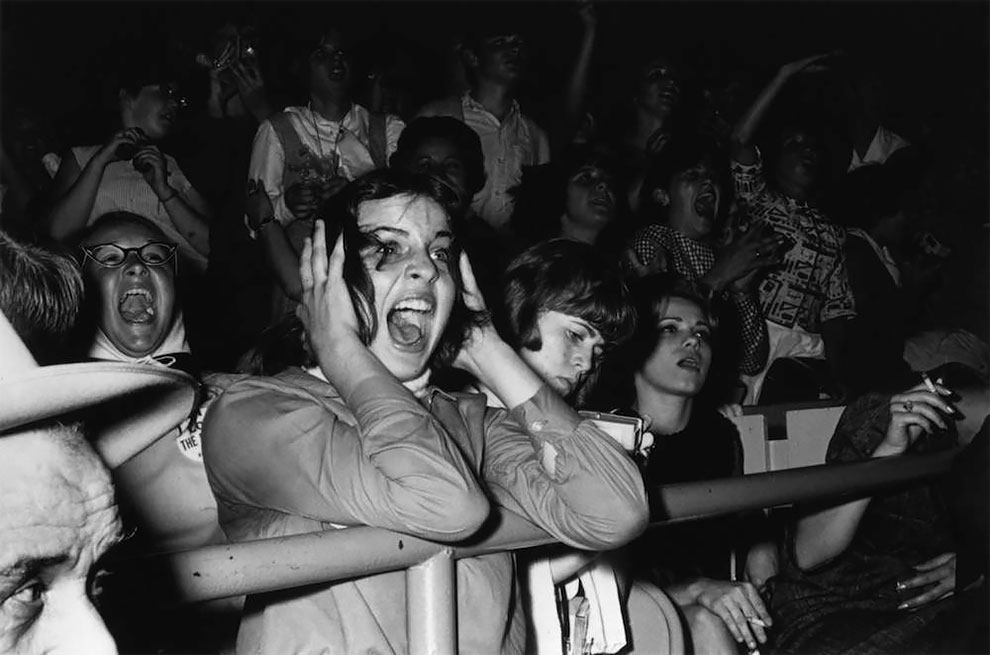 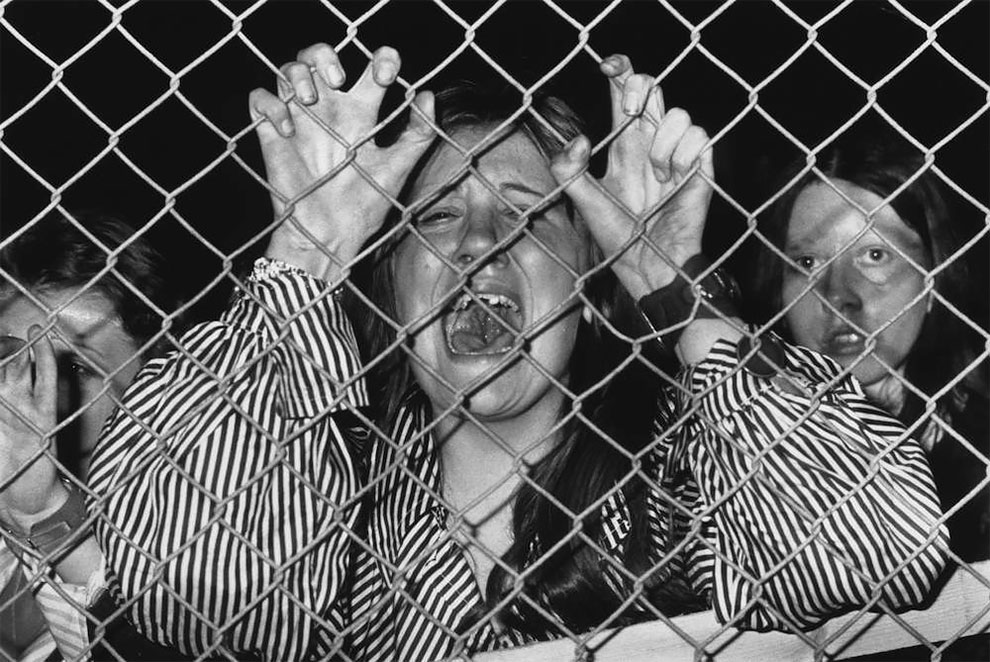 14th August 1964: A tearful fan is escorted off the stage as pop group The Rolling Stones perform at the Wimbledon Palais, London. Drummer Charlie Watts is in the centre. Photo by Davies/Express/Getty Images 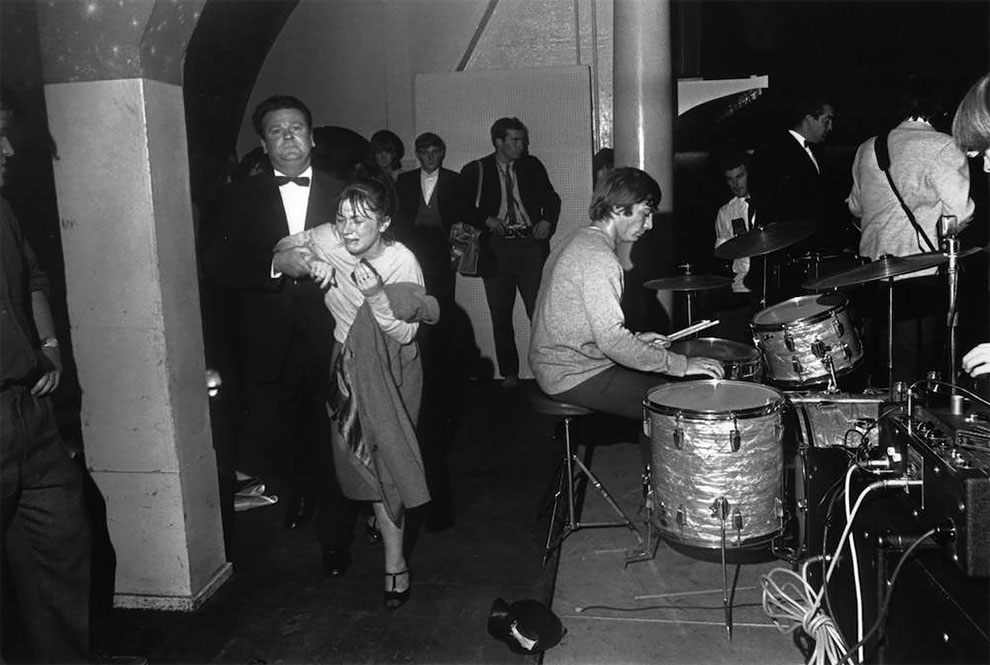 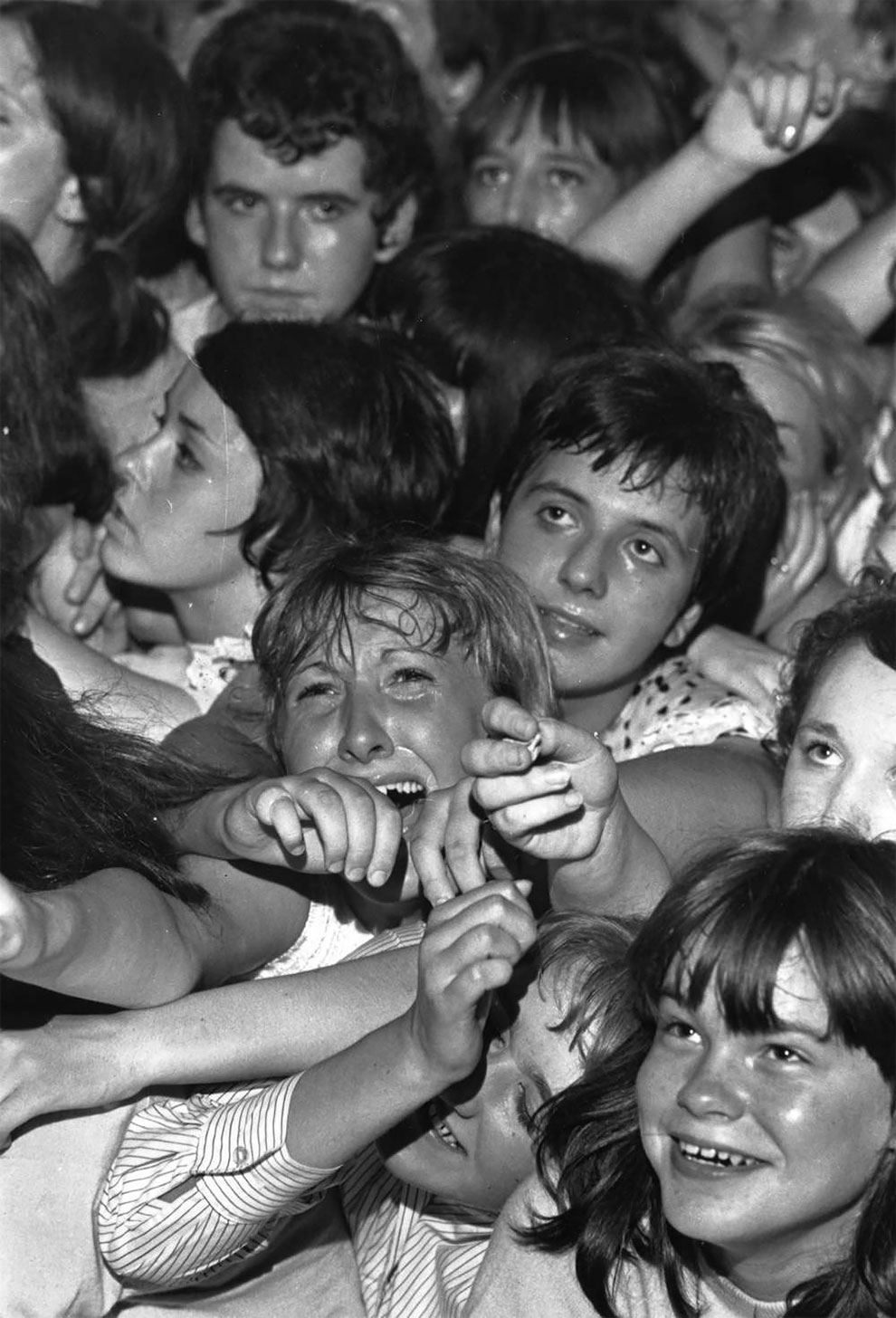 A teenage Beatle fan in hysterics as she catches a glimpse of her heroes. Photo by William Lovelace/Getty Images 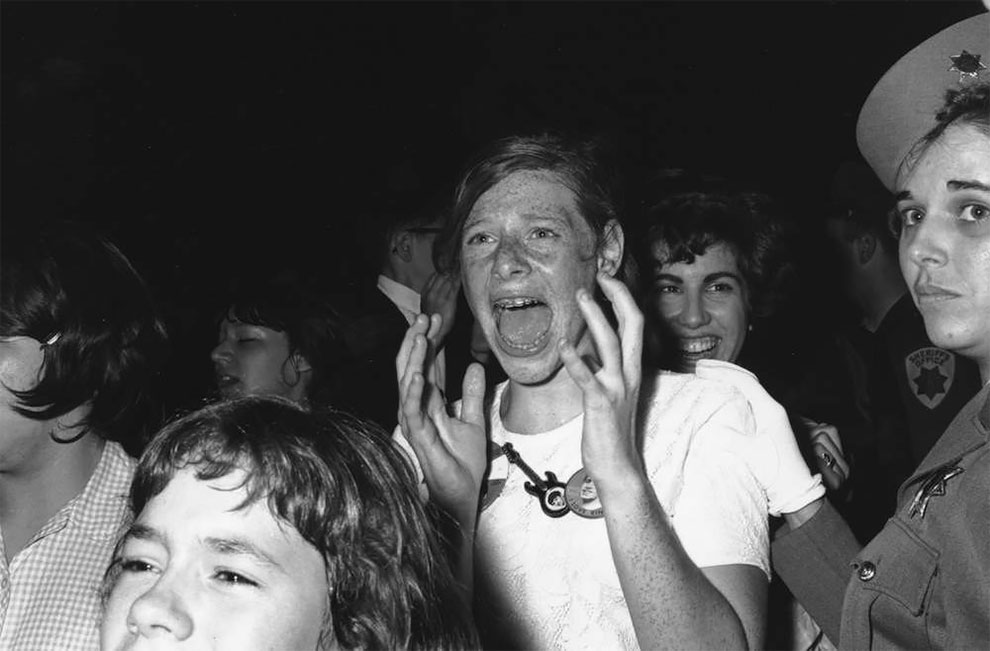 22nd May 1975: Ecstatic tartan-clad Bay City Roller fans at a concert in Swansea, where 16 of them had to be taken to hospital. Photo by Graham Wood/Evening Standard/Getty Images 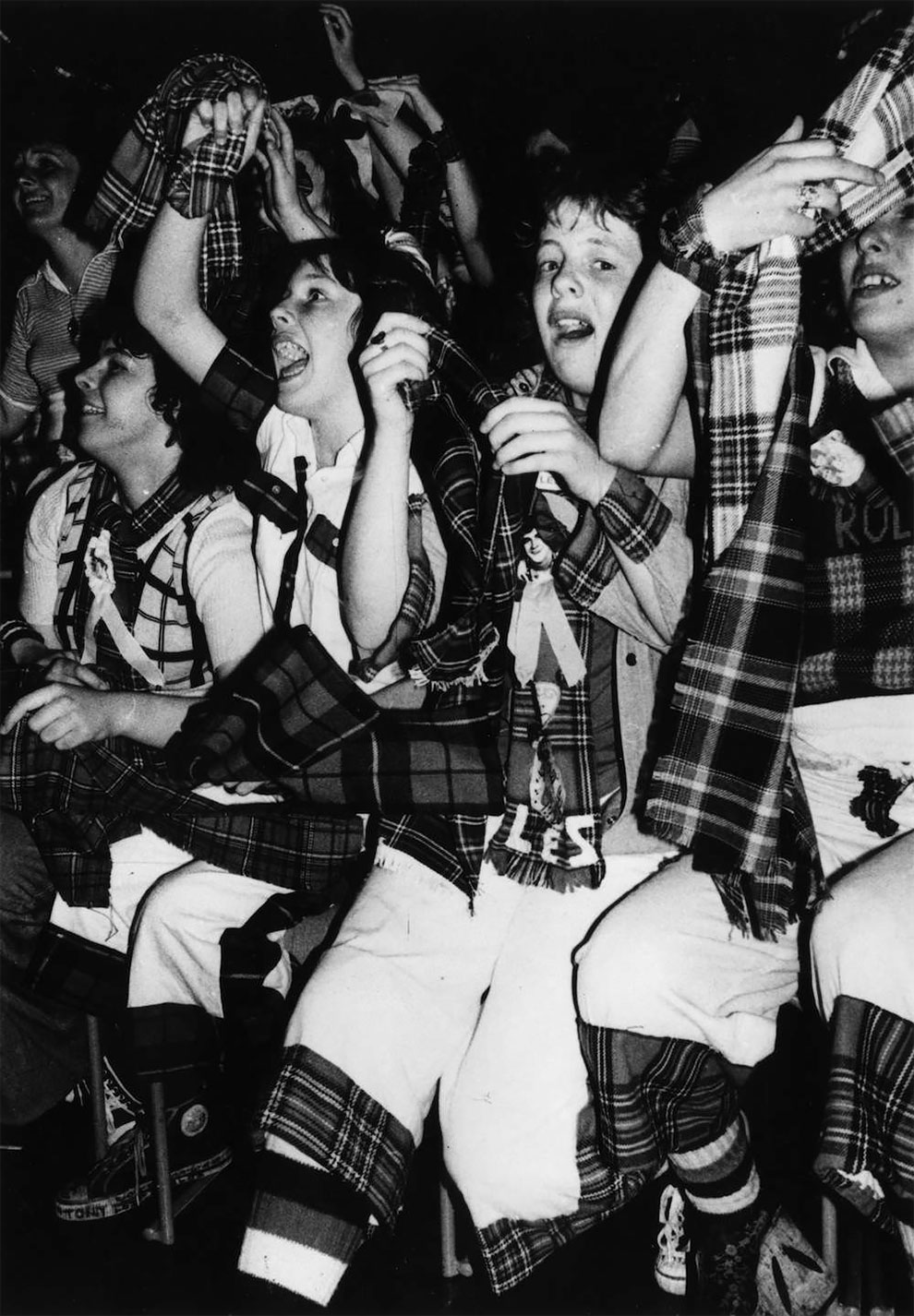 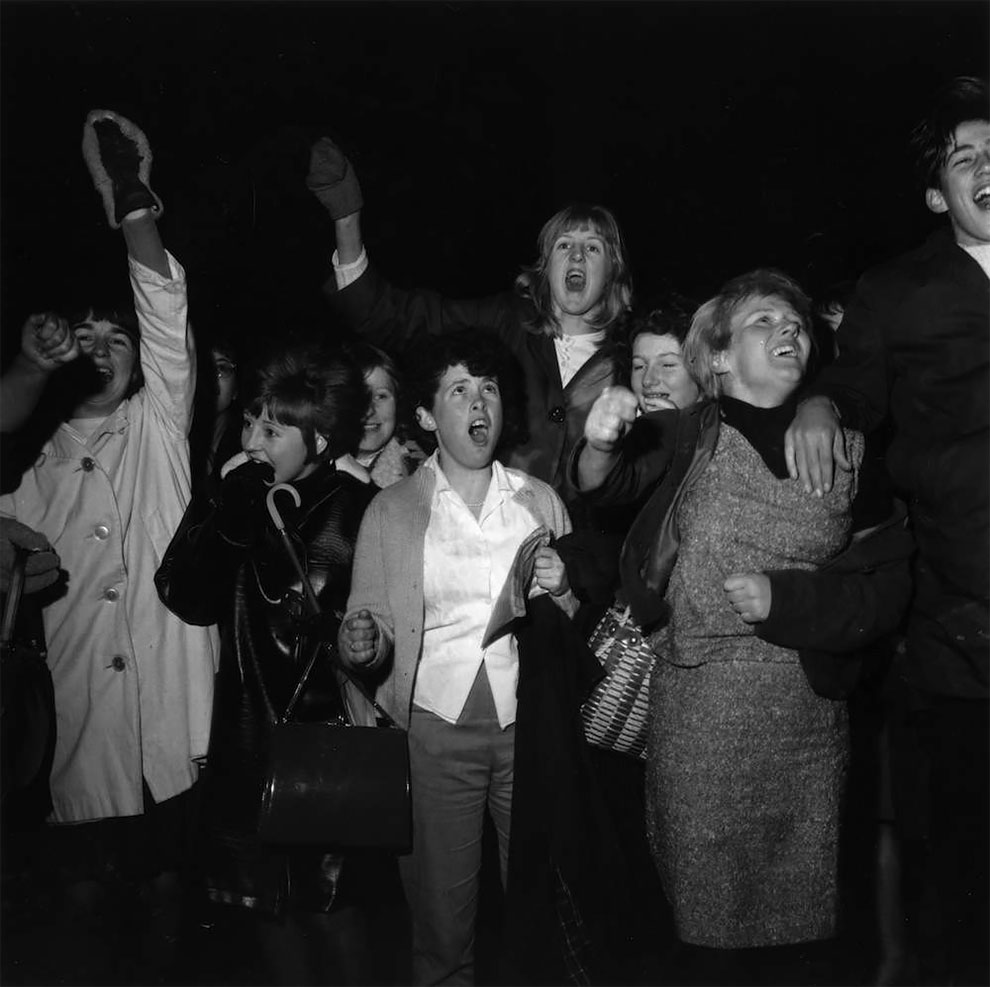 15th March 1965: British police hold back excited young Beatles fans hoping for a glimpse of their musical heroes during the filming of the musical ‘Help’, on location in London. Photo by Stan Meagher/Express/Getty Images 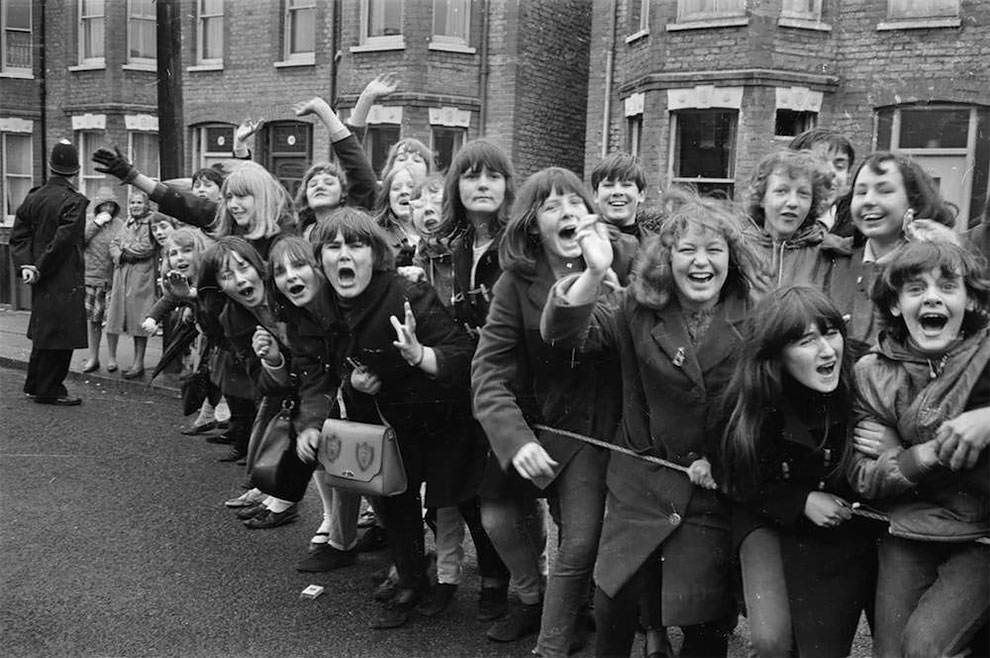 January 1964: Dave Clark, drummer in his band the Dave Clark Five, besieged by fans outside The Royal in Tottenham, London. Photo by Chris Ware/Keystone Features/Getty Images 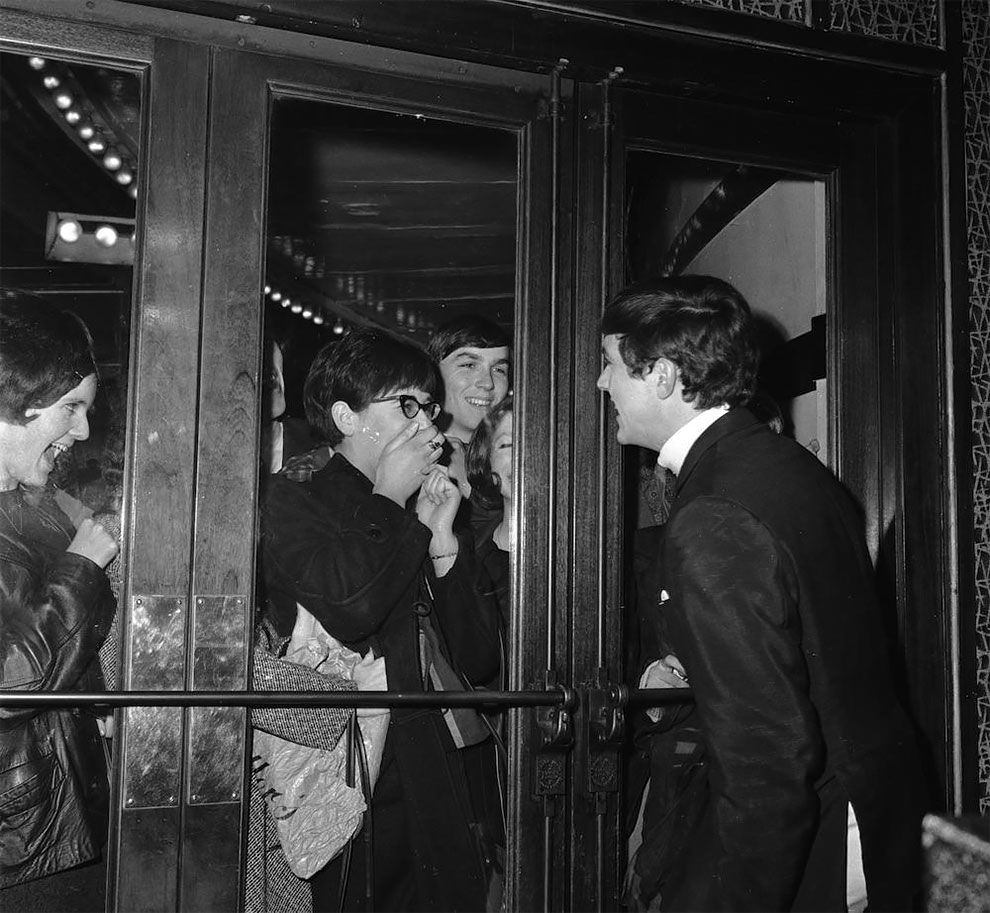 October 1975: Thousands of adoring David Essex fans lose control during one of his concerts at the Belvue in Manchester. Photo by John Madden/Keystone/Getty Images 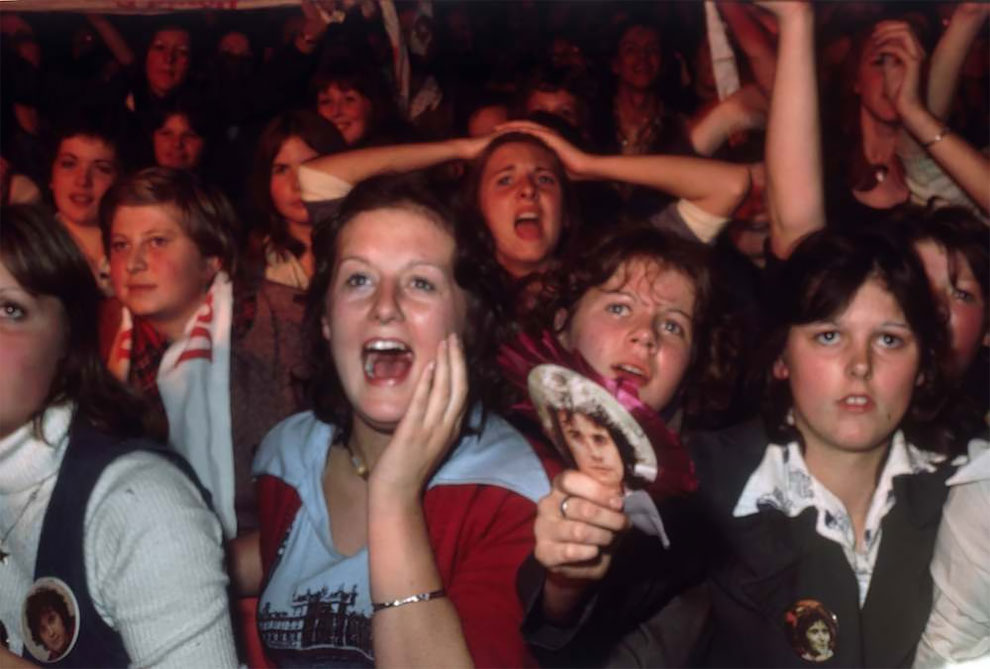 18th February 1954: Jazz fans collapsed onto chairs, overcome with emotion, at a crowded dance hall where their idols of song Ted Heath, Dickie Valentine and Lita Roza are performing. Photo by Keystone/Getty Images 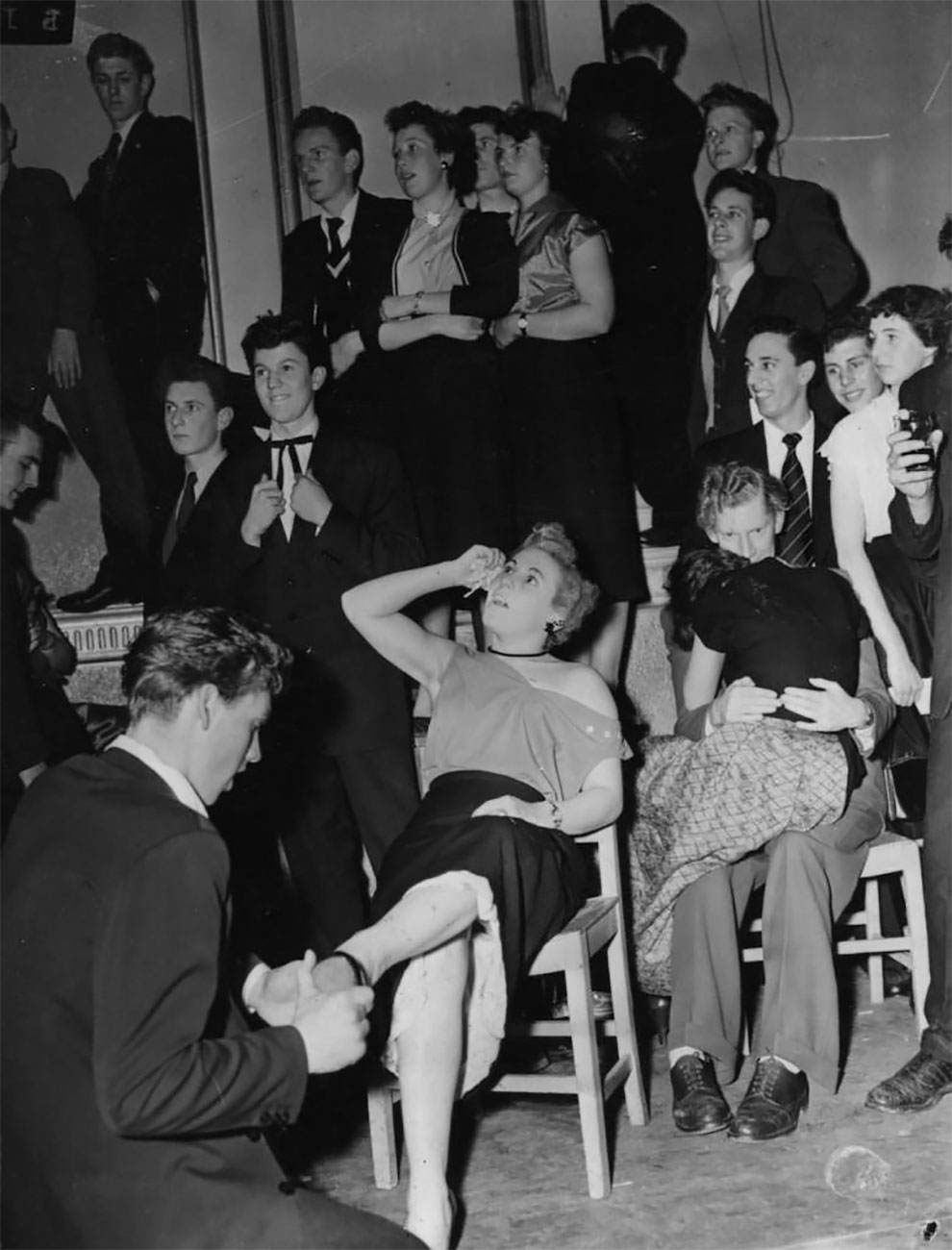 4th November 1963: A group of girls bang and shout at the door of the Prince of Wales Theatre in London’s West End, where The Beatles are rehearsing for the Royal Command Performance. Photo by B. Marshall/Fox Photos/Getty Images 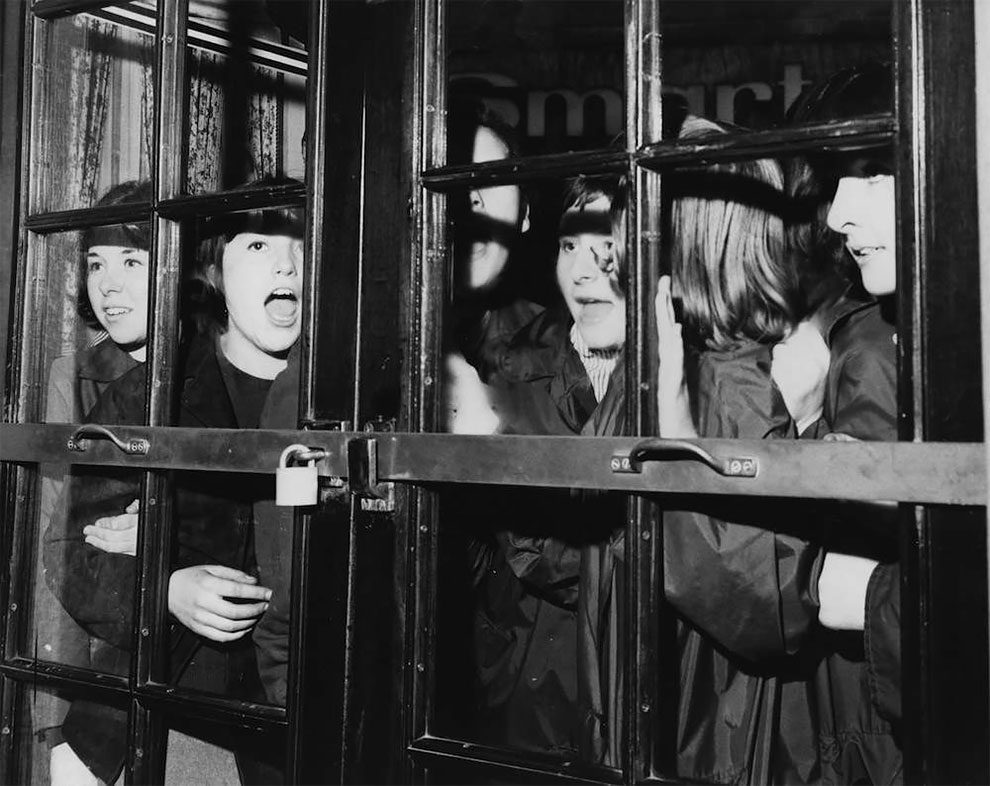 17th May 1974: A young fan lies crying on the stage of the Hammersmith Odeon, London, comforted by a friend, at a concert by the British rock group Slade. A security guard stands behind. Photo by Graham Wood/Evening Standard/Getty Images 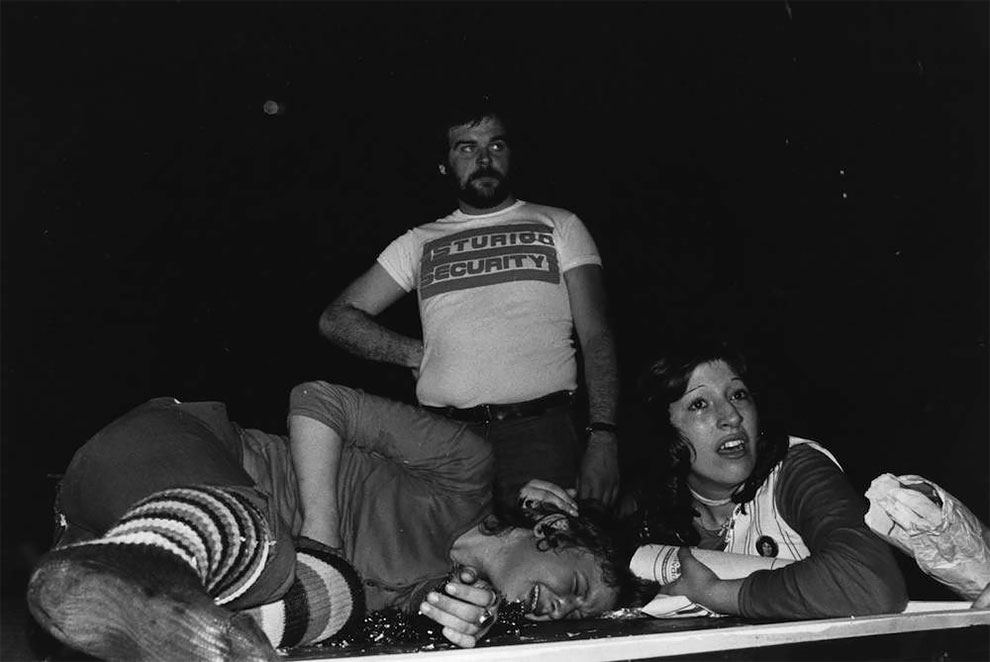 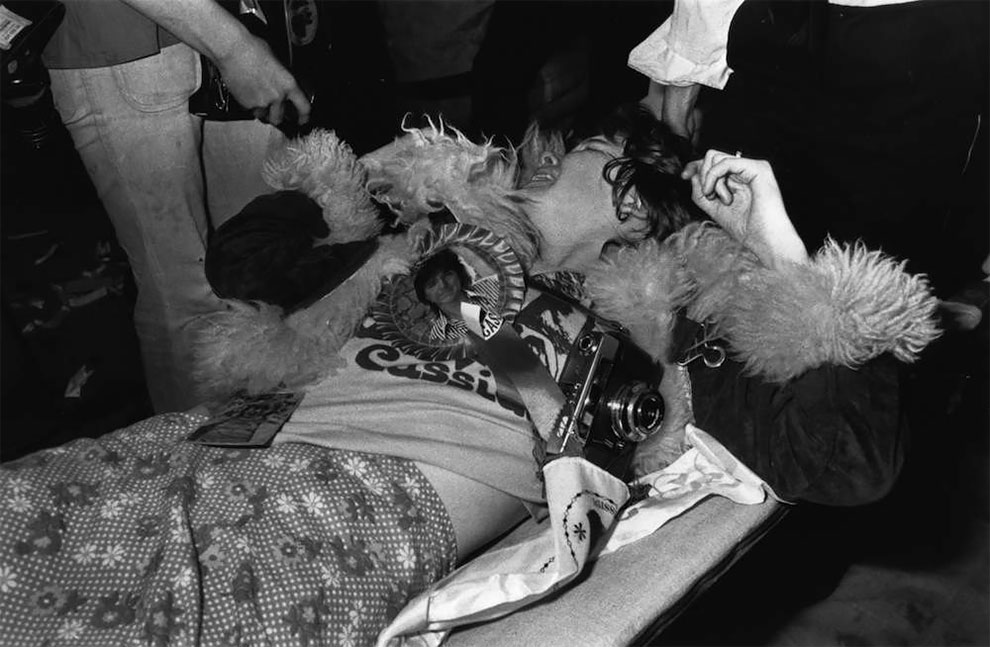 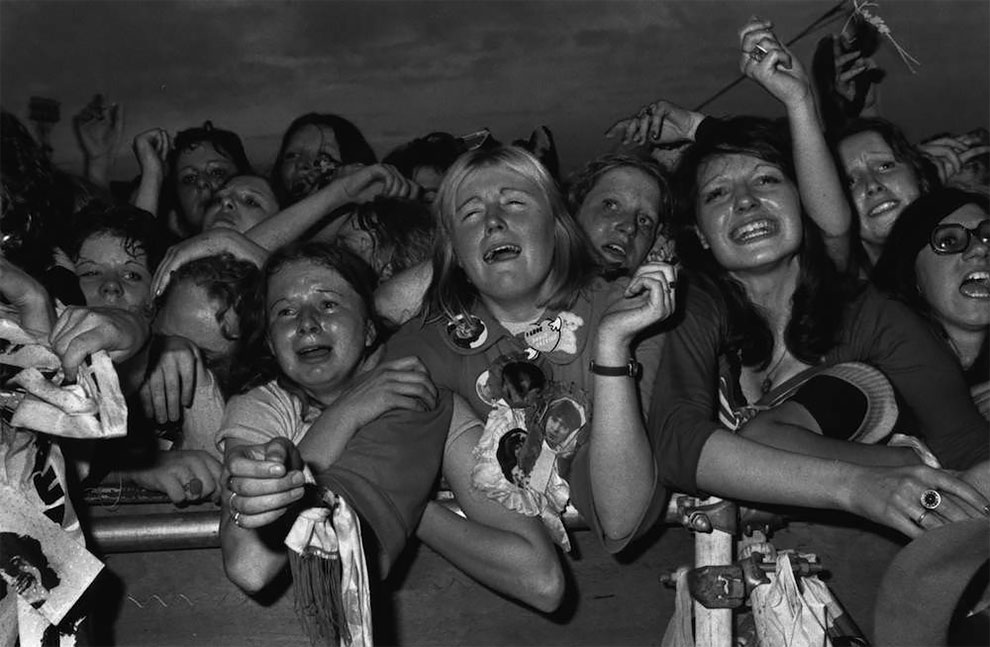 30th May 1975: A crowd of over-excited teenage girls scream and cry at the sight of their idols, pop group The Osmonds. Photo by Evening Standard/Getty Images 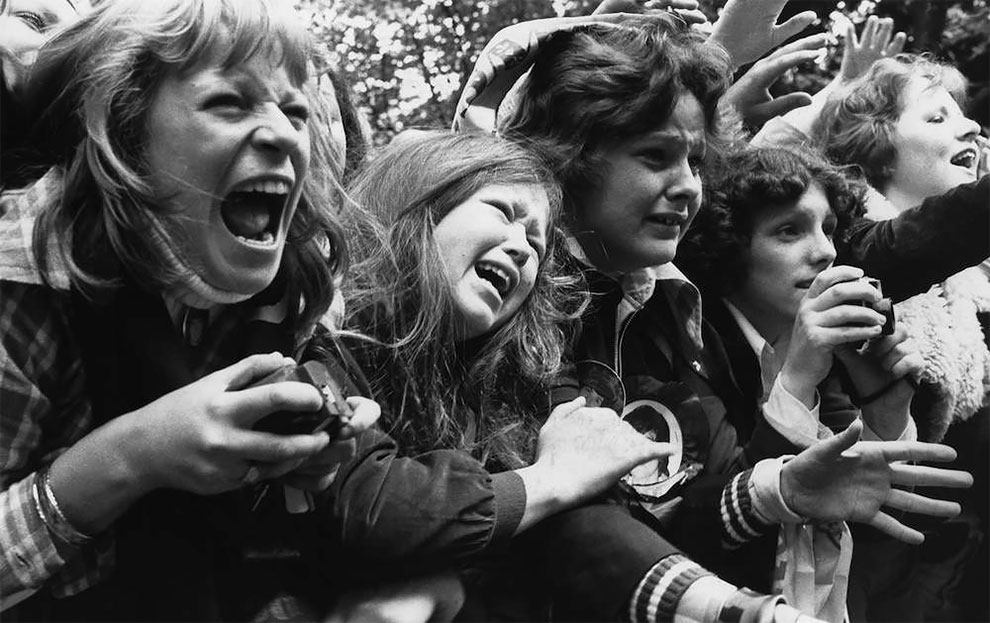 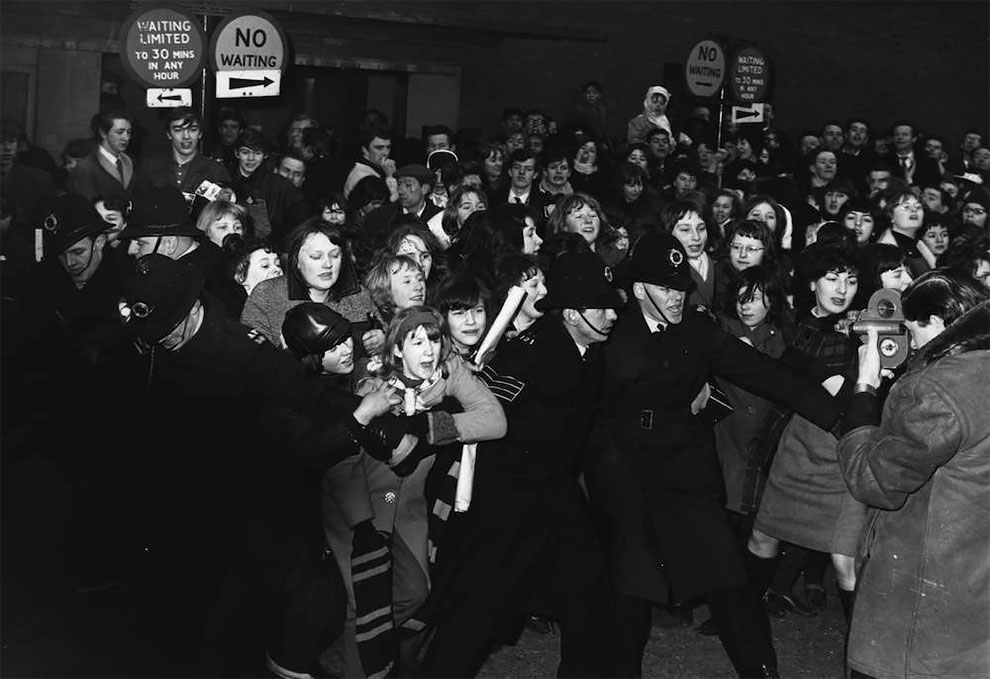 10th February 1964: Two excited girls in Beatles sweatshirts, amongst a crowd of fans in New York, welcoming the group as they arrive at the airport. 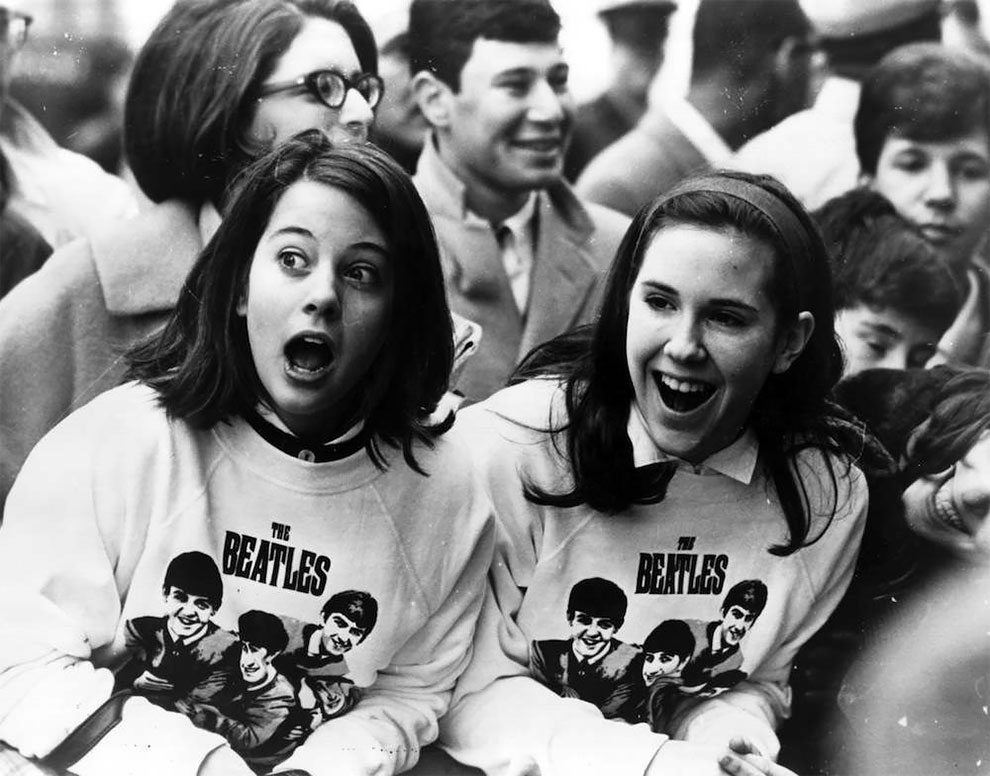 22nd February 1964: A London policeman has to block his ears as a crowd of Beatles fans give the Fab Four their typical welcome at London Airport, after their tour of USA. Photo by Fox Photos/Getty Images 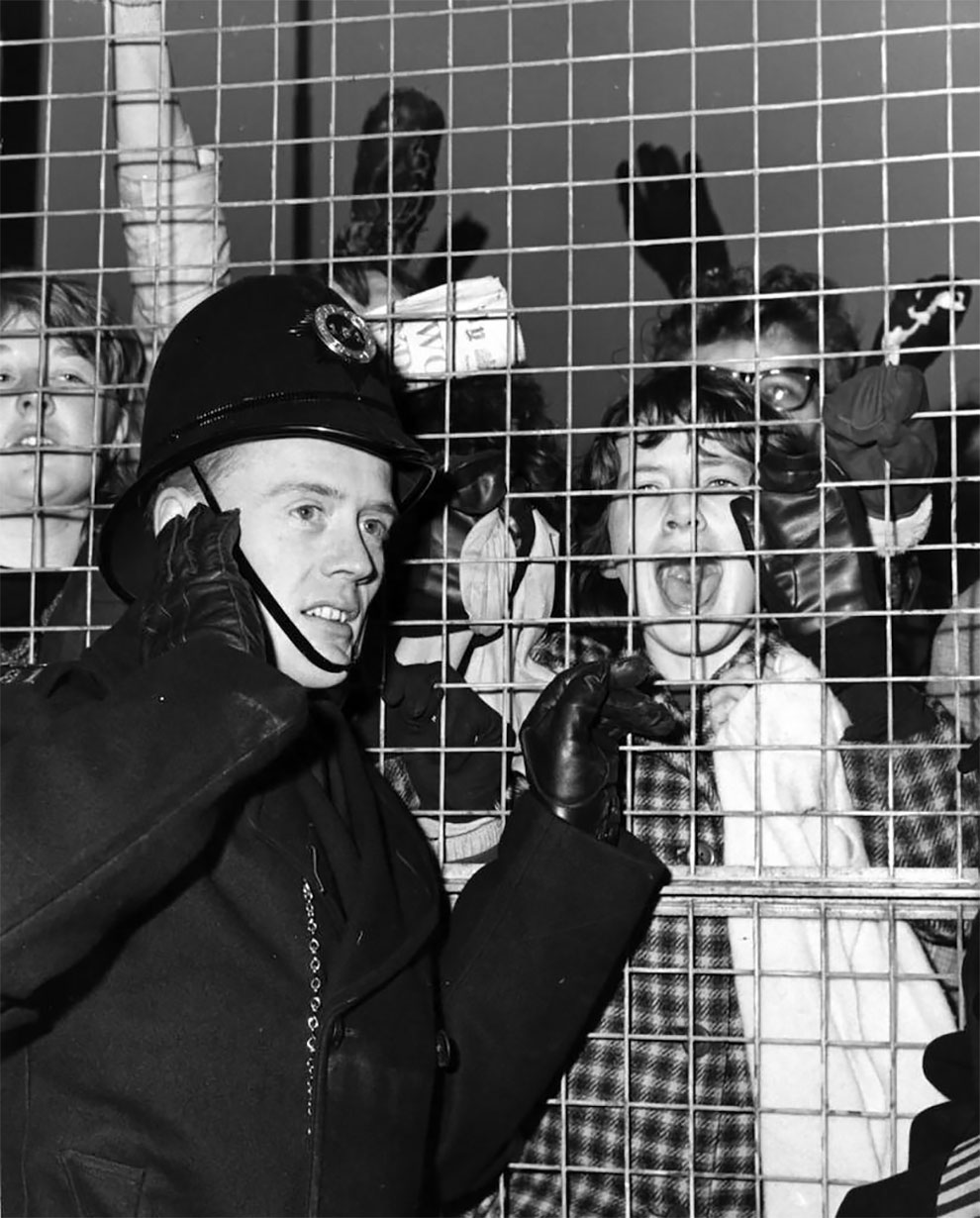 24th February 1964: A group of Beatles fans waiting for a glimpse of their idols outside ABC Television Studios in Teddington, where they are working on a new film. This group of fans had waited three hours in the rain, only to be told that the Beatles would not be leaving for at least another eight hours, undeterred, they decided to stay and wait. Photo by Keystone/Getty Images 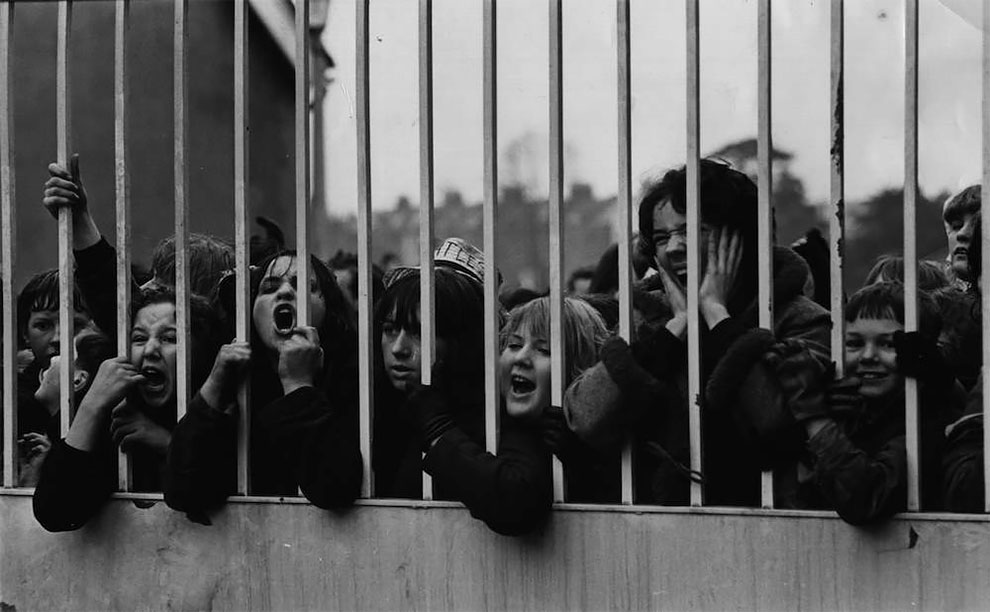 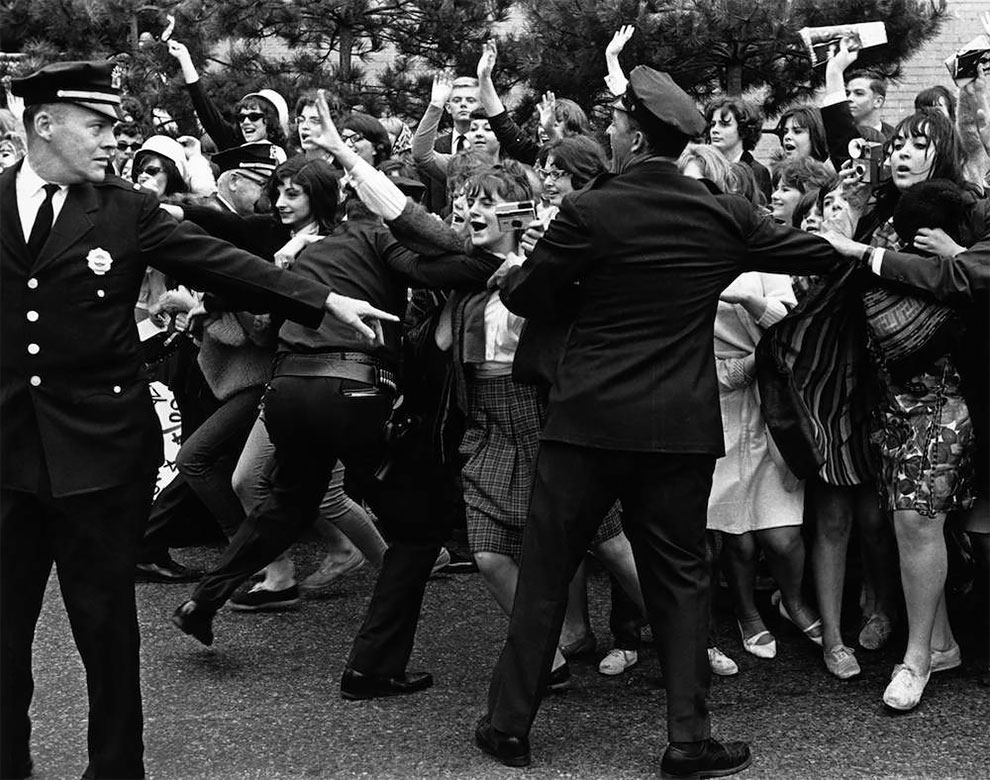 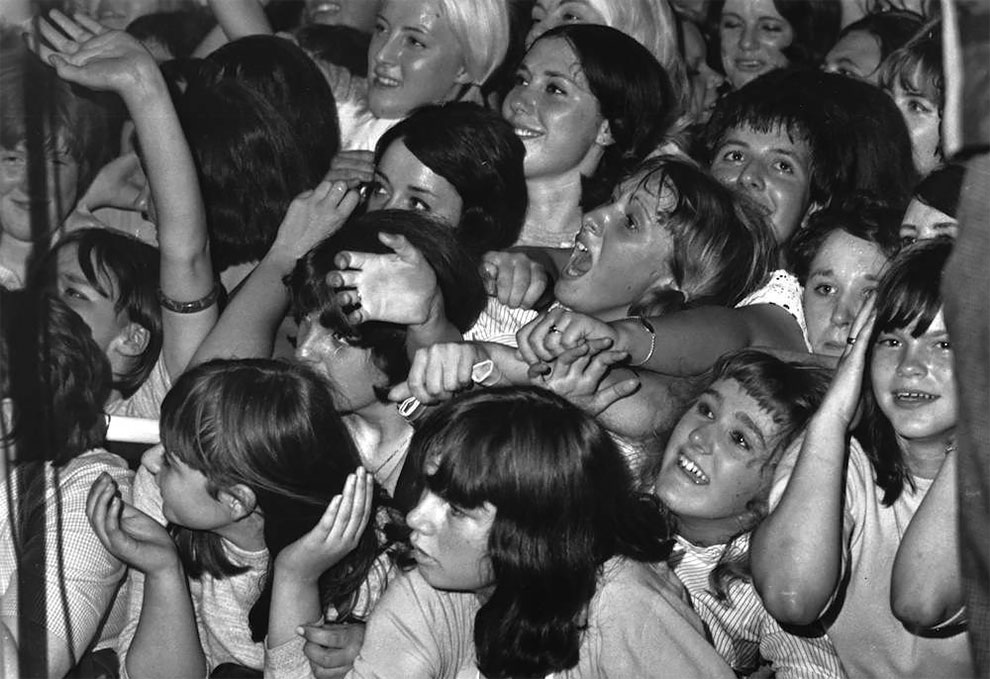 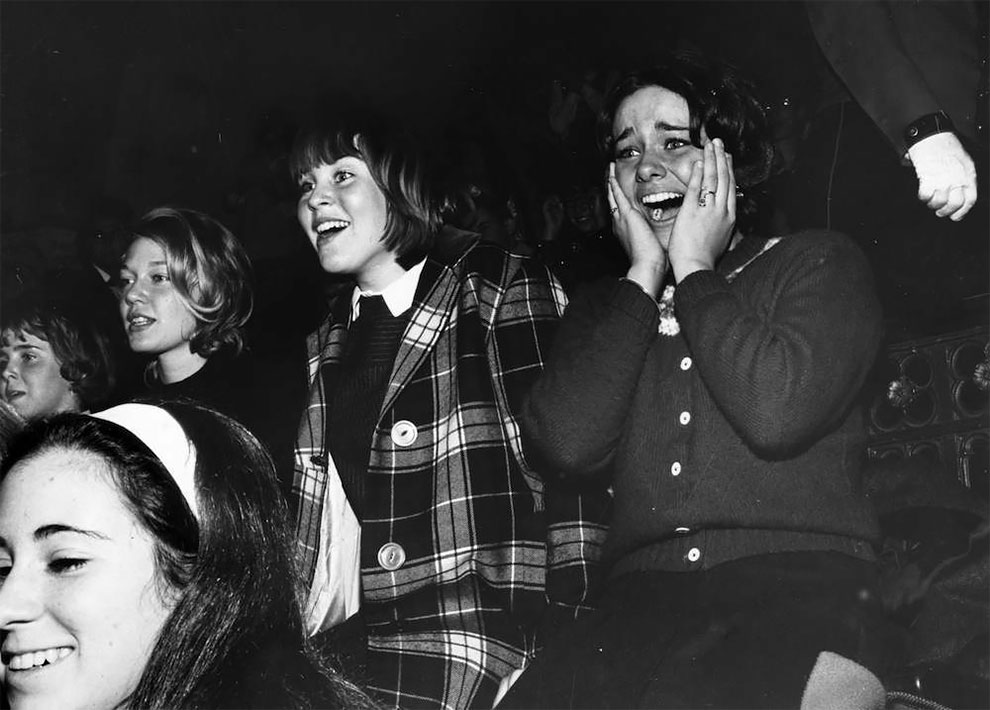 27th May 1975: A crowd of excited fans of the American pop group The Osmonds wait behind a barrier in Eaton Square where the group is staying during a visit to London, hoping for a glimpse of the family. Photo by Central Press/Getty Images 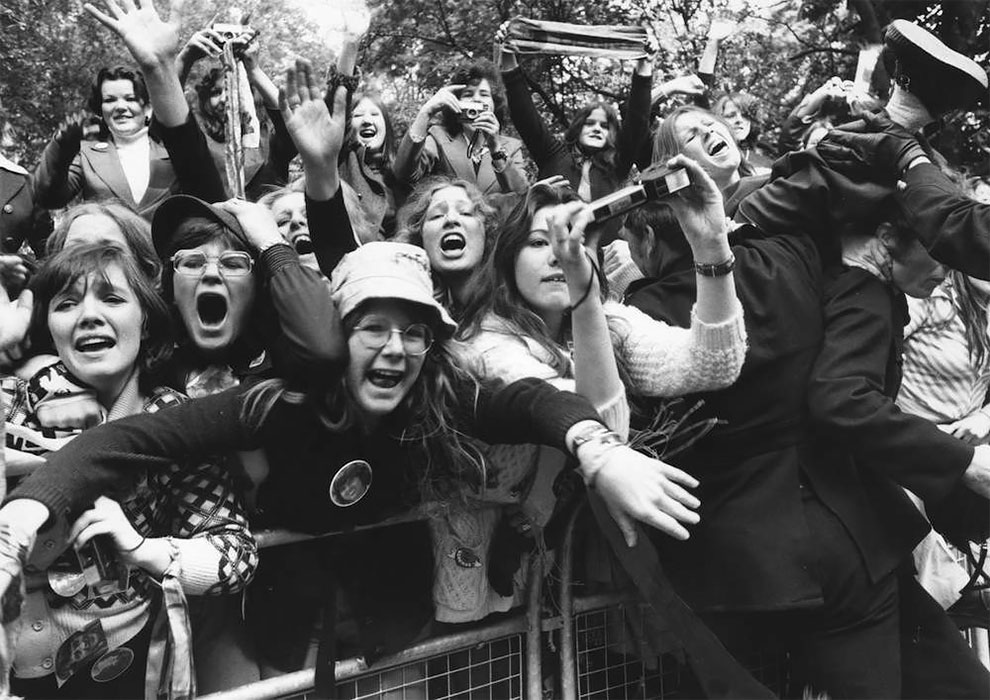 14th August 1964: Fans watching the Rolling Stones in concert at the Wimbledon Palais, London. For some the excitement verges on hysteria. Photo by Davies/Express/Getty Images 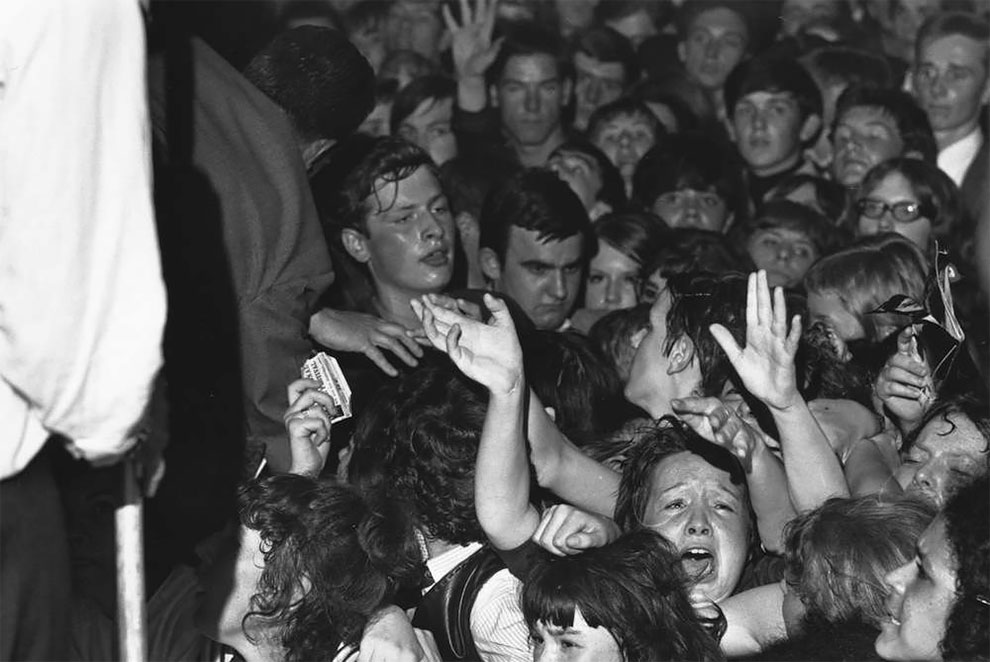 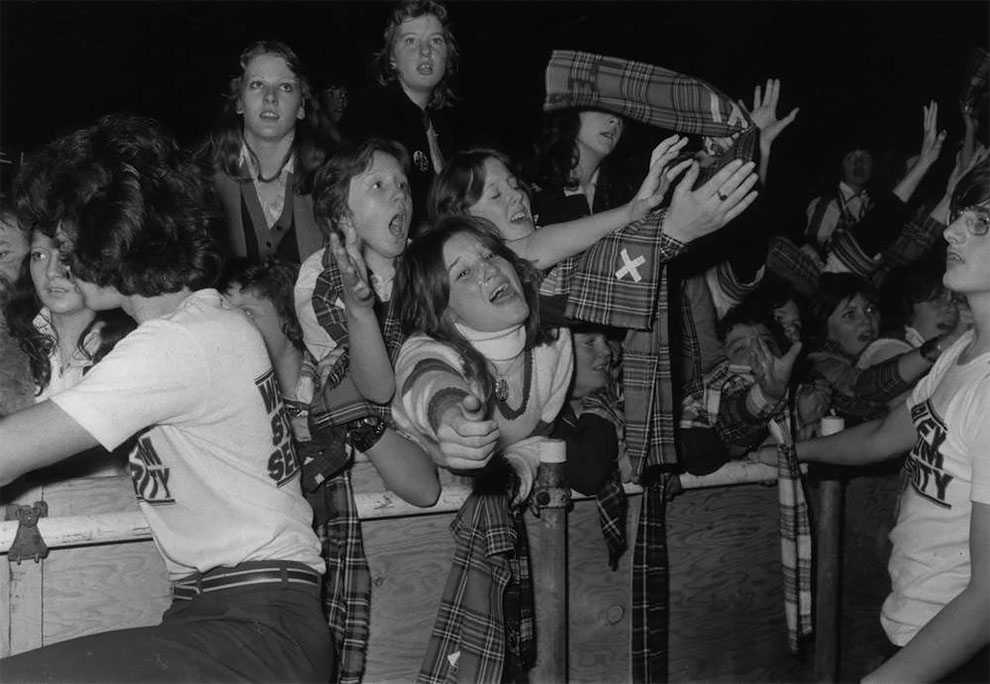 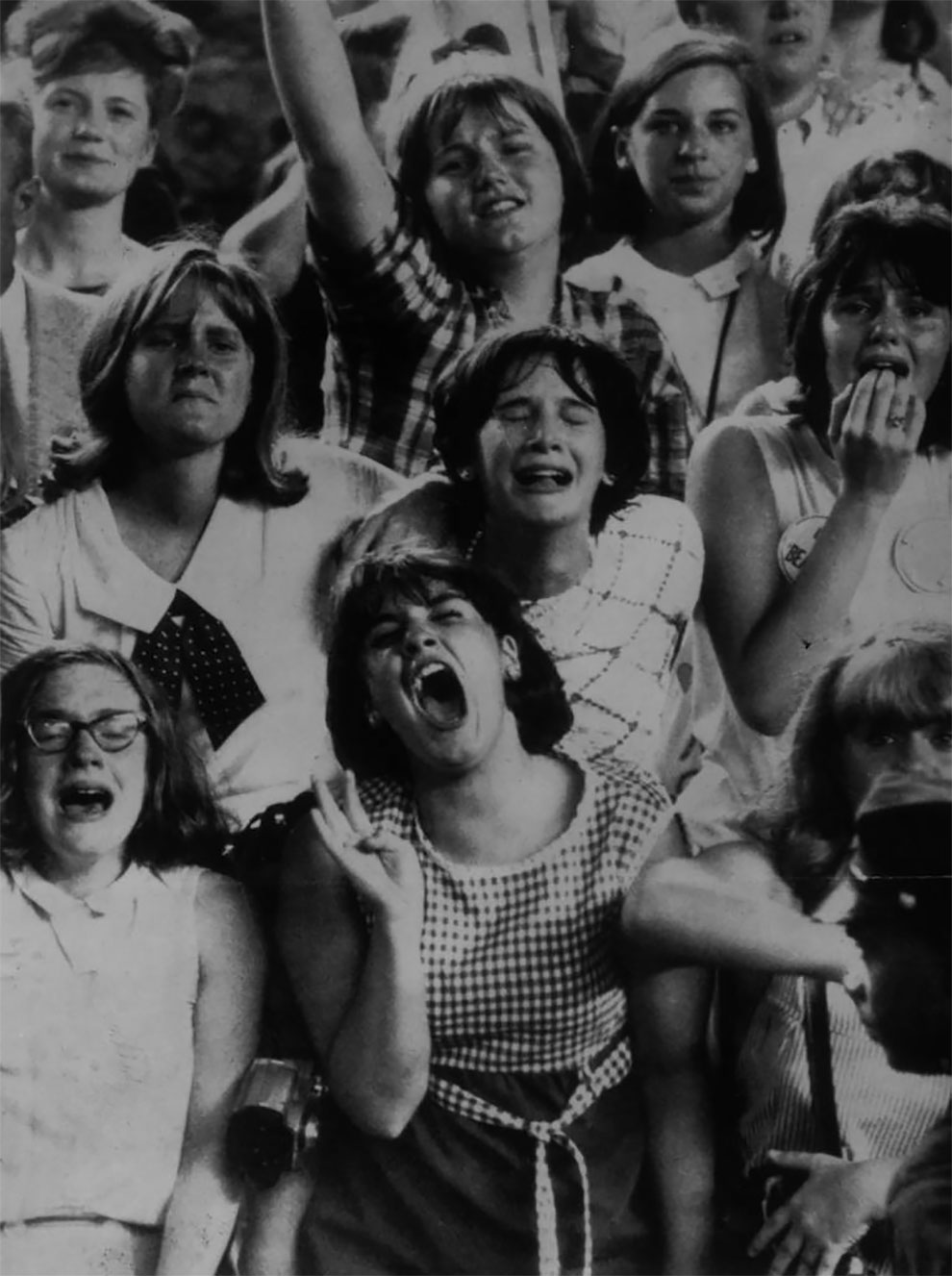 Fans of pop singer David Bowie at the last concert he performed in his Ziggy Stardust persona, at the Hammersmith Odeon, London, 3rd July 1973. Photo by Steve Wood/Express/Hulton Archive/Getty Images 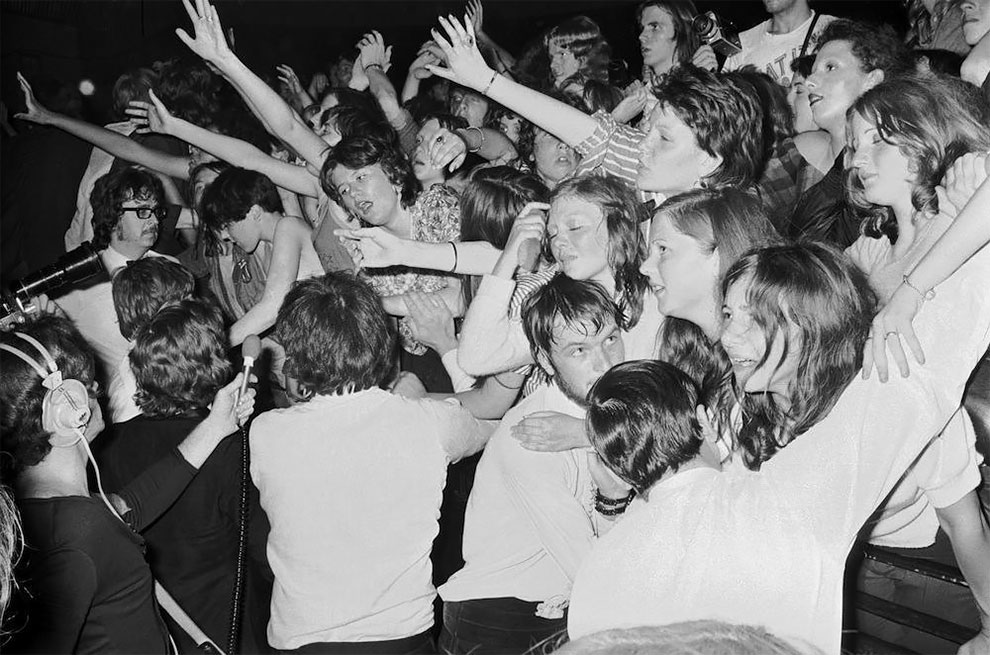 Screaming Duran Duran fans in the front row during a concert held at Wembley Arena in London, England on December 19, 1983. Photo by Rogers/Express/Getty Images 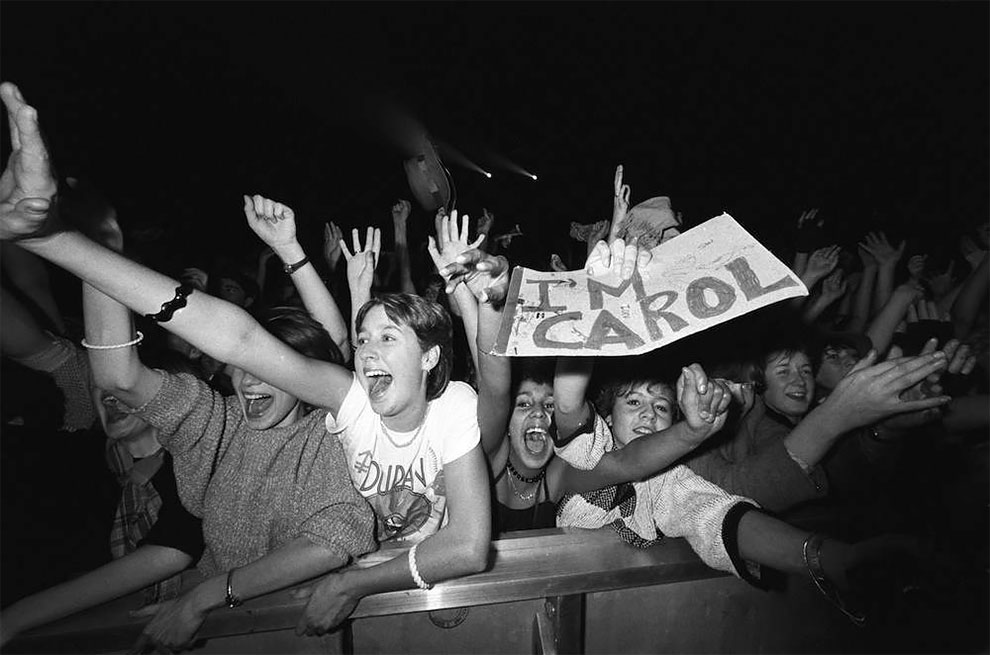 KangHee Kim’s Images Are As Satisfying To Create As They Are To Look At
Photographer Capture’s Kawau Birds Perched On Electric Wires In Tokyo
Last Days of Autumn Season
Dad And Daughter Recreates Iconic Scenes From 73 Famous Movies And TV Series
Marvelous Beauty Portrait Photography By Eric Hückstädt
Photography Project That Proves You Can Tell A Pet’s Owner By Their Feet
Photographer Noe Alonzo Shoots Stunning Rainy Photos Of Seoul With His Phone
Spectacular Winning Photos Of The 2019 British Ecological Society Photography Competition
Mesmerizing Aerial Pictures Of Australia Taken With A Drone
Amazing Macro Portraits of Bees Reveal How Different They Actually Look
Monumental Chaos
Spectacular Winning Photos From The Travel Photographer Of The Year Awards
Cyberpunk, Neon And Futuristic Street Photos Of Seoul By Steve Roe
The Lost Tribes Of Tierra Del Fuego: Rare And Haunting Photos Of Selk'nam People Posing With Their Traditional Body-Painting
Cool Pics Defined Fashion Trend Of Young Women In The 1990s
Beautiful Landscapes Of The Speicherstadt in Hamburg, Germany By Alexander Schoenberg
An Artist Confronts Depression with The Help of Photography
Beautiful Colorized Photos Of Immigrants in Their Traditional Dresses At The Ellis Island Immigration Station In The Early 20th Century
Creauters from Outer Space
London-Based Artist Thomas Duke Recreates Film Scenes Set In London And Beyond
Extraordinary Black And White Portraits Of Celebrities Taken By Irving Penn
"Nature Under Threat": The winning Images of The Cop26 Photographic Competition 2021
Sensual and Surreal Fine Art Photography by Oleg Oprisco
Winners Of The London Street Photography Festival 2021
concerts, ecstatic, photos, screaming, stunning, teenagers