Siena International Photo Award is one of the photo contests with the highest international participation ever. 2018 edition has received nearly 48.000 images from amateur and professional photographers from 156 countries worldwide. 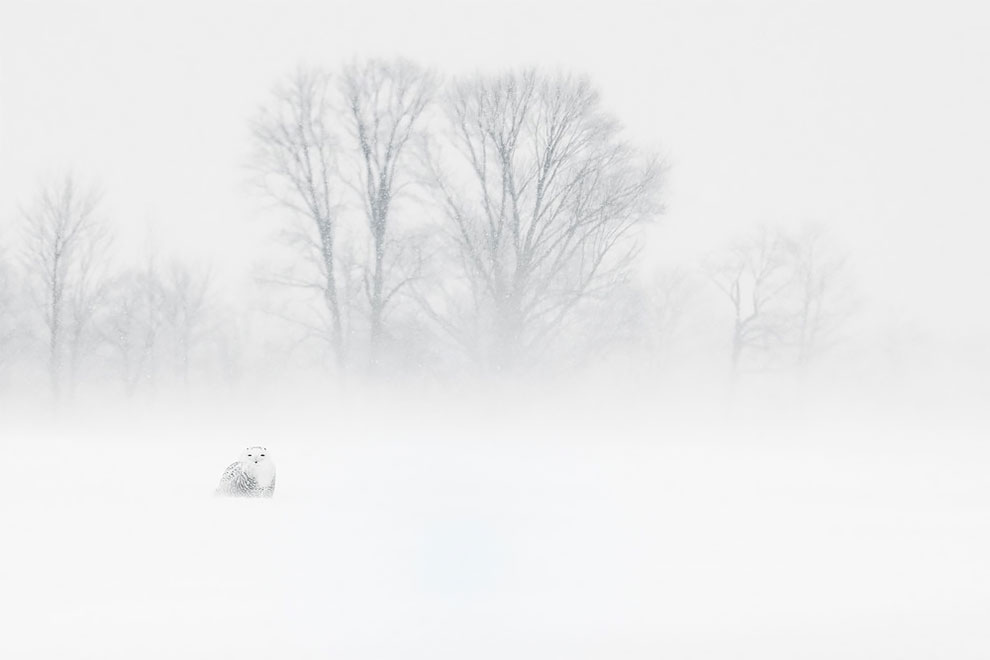 Snowy Owl, Canada, by Andrew McLachlan. I live in a farming area in south-central Ontario. Every winter, snowy owls fly south from the Arctic to spend the winter hunting meadow voles in the fields. As blizzard conditions persisted, this owl remained hunkered down on the ground. Honourable mention, Animals in their Environment category. (Photo by Andrew McLachlan/SIPA Contest) 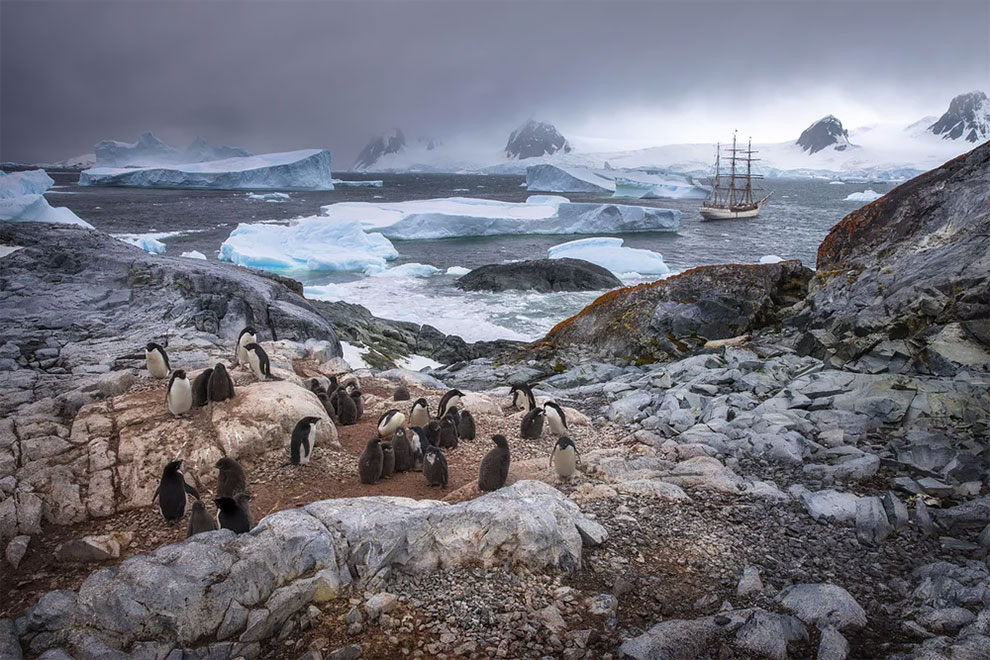 Honorable Mention in The Beauty of Nature. Adélie Penguins in their native habitat on Yalour Islands (Credit: Vladimir Alekseev) 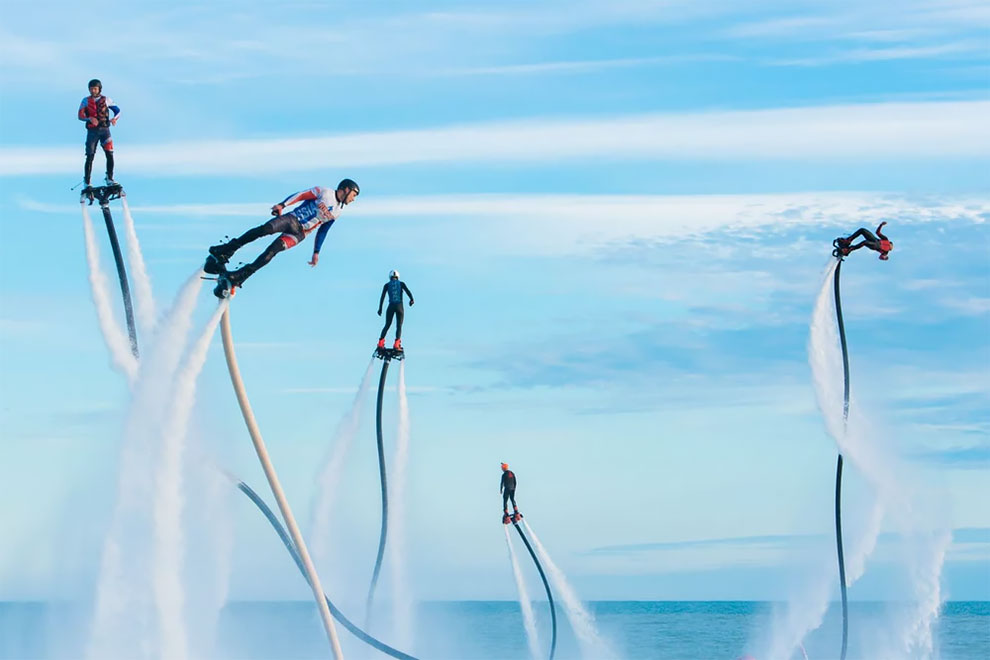 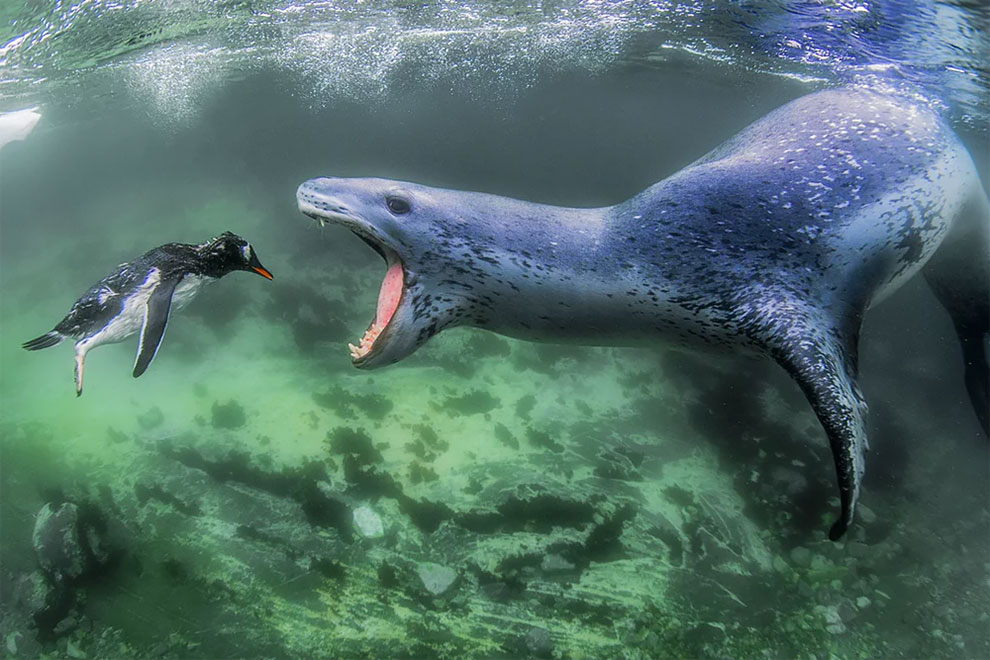 Winner of Animals in their Environment. The seal released the penguin twice and the terrified penguin succeeded in escaping, but the seal continued chasing after it, and on the third attempt, drowned the penguin and devoured it (Credit: Amos Nachoum) 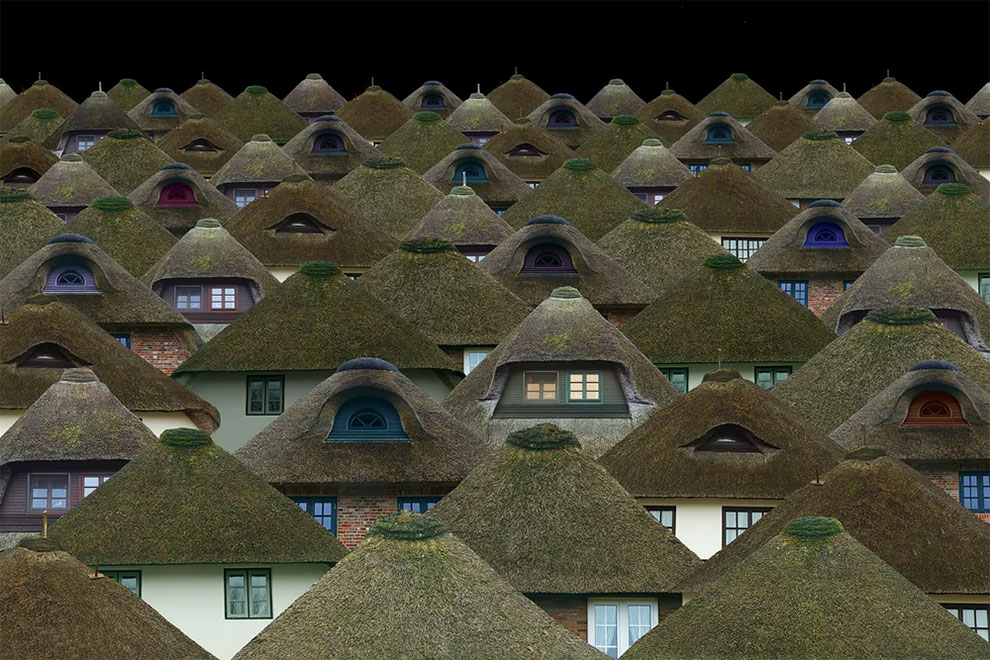 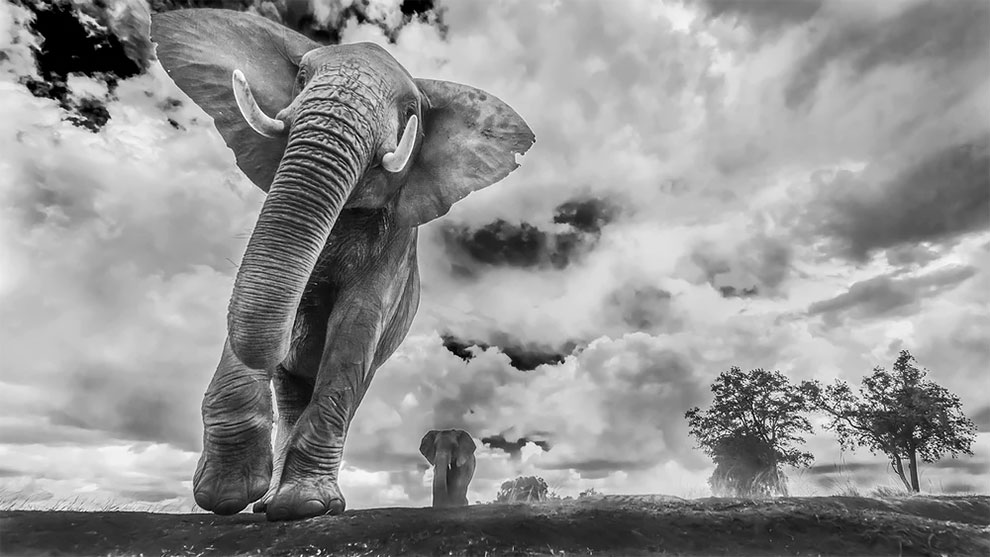 Remarkable Award in Animals in their Environment. This striking image is titled “It came to me in a dream” (Credit: Manoj Shah) 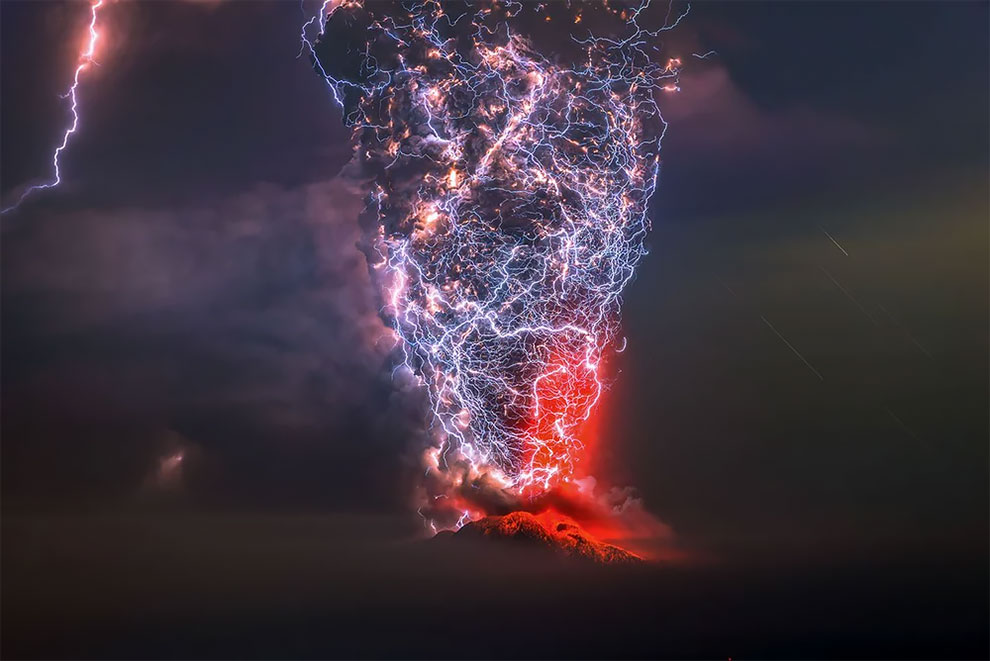 Winner in The Beauty of Nature. This photograph was taken during a violent night eruption of the Calbuco volcano in the Lagos region, Chile. An incredible dirt storm wraps the fumarole of the erupting volcano (Credit: Francisco Negroni) 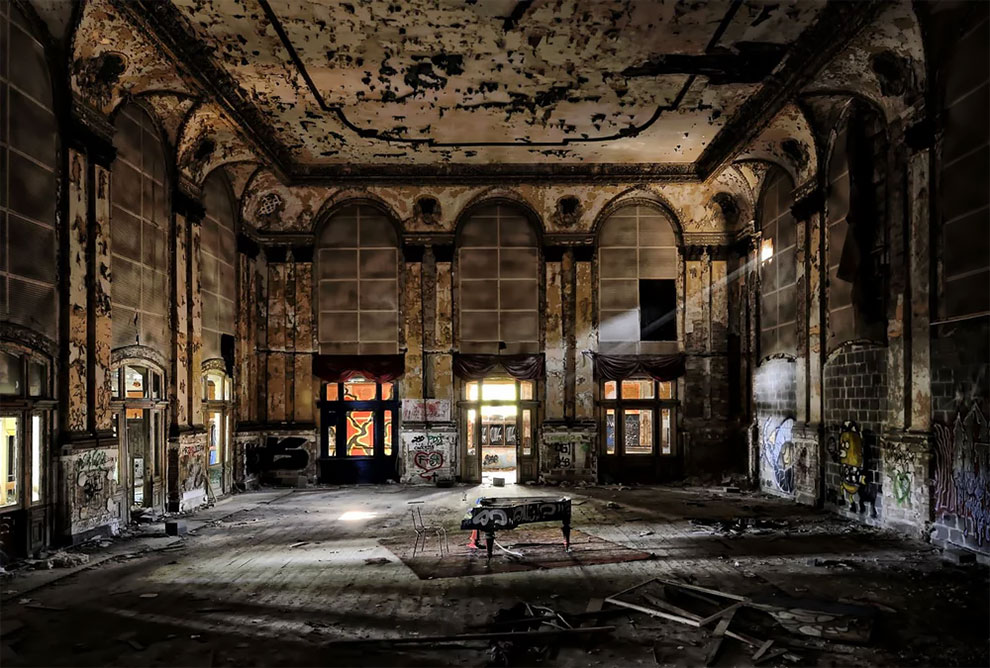 Honorable Mention in Architecture and Urban Spaces. An abandoned ballroom in Germany, a piano telling a story of other times, when in the 1920’s couples danced to its notes (Credit: Stefano Barattini ) 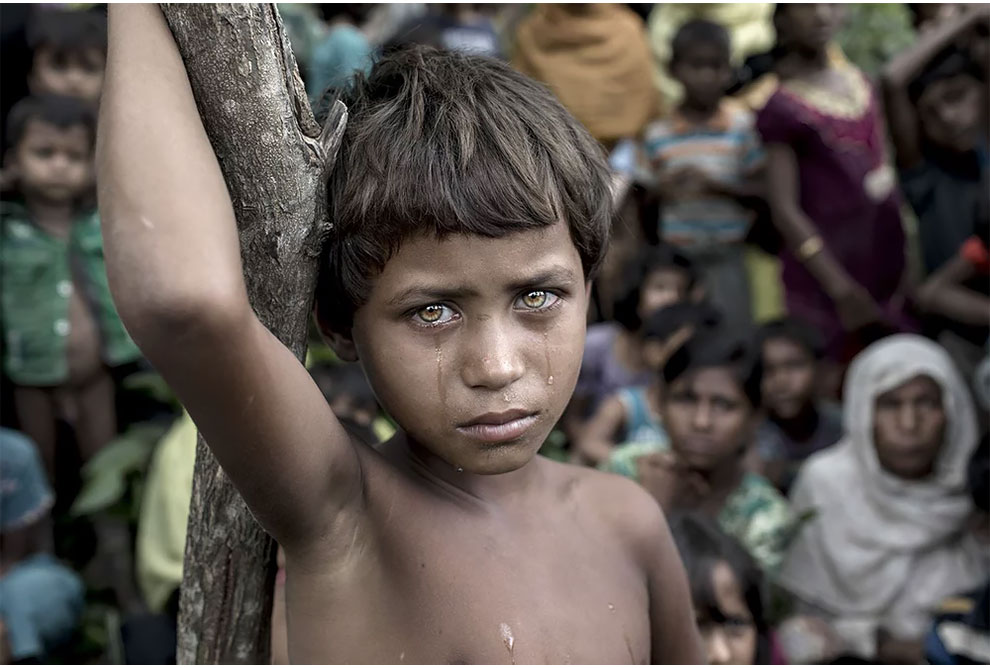 Winner of Photo of the Year. In Cox’s Bazar, Asmat Ara looks clearly traumatized after the recent violence which took place in Myanmar, on September 6th, 2017. The previous night she had entered Tenkhali Rohingya refugee camp with her family from Kumar Khali, Myanmar Rohingya state (Credit: K M Asad) 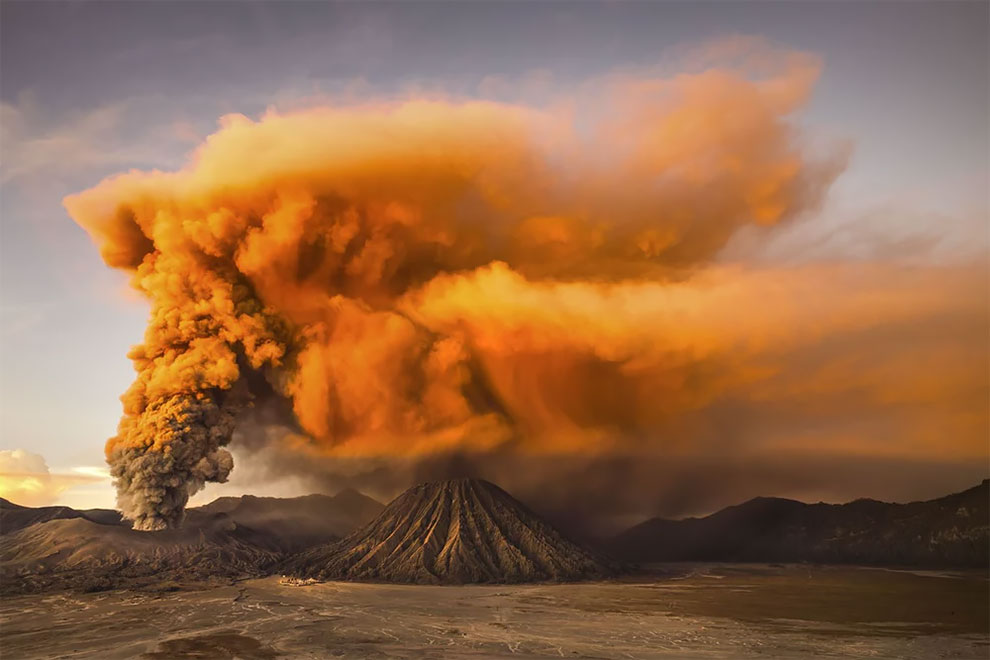 Honorable Mention in The Beauty of Nature. This phenomenal picture was taken in Bromo Tengger Semeru National Park at sunrise. Mount Bromo’s eruption, in January 2016, was highly unusual as it lasted for almost a year (Credit: Riksa Dewantara) 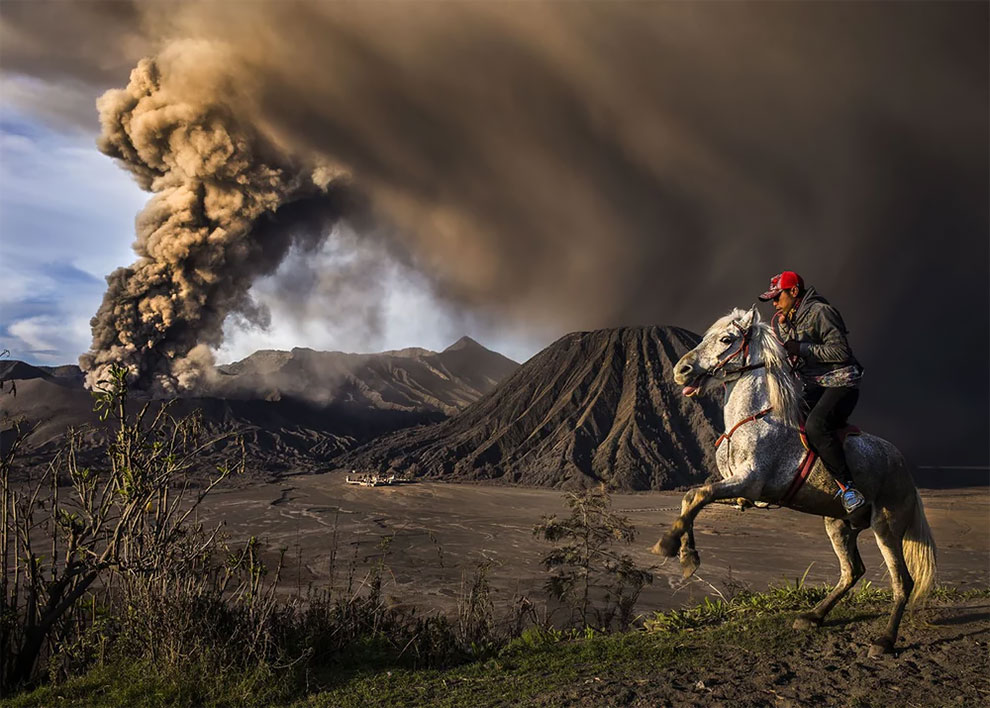 Second place in Journeys and Adventures category of the 2018 Siena International Photo Awards. The explosive eruption and loud rumbling of the Mt. Bromo volcano scared the horse causing it to rear up onto its hind legs (Credit: Riksa Dewantara) 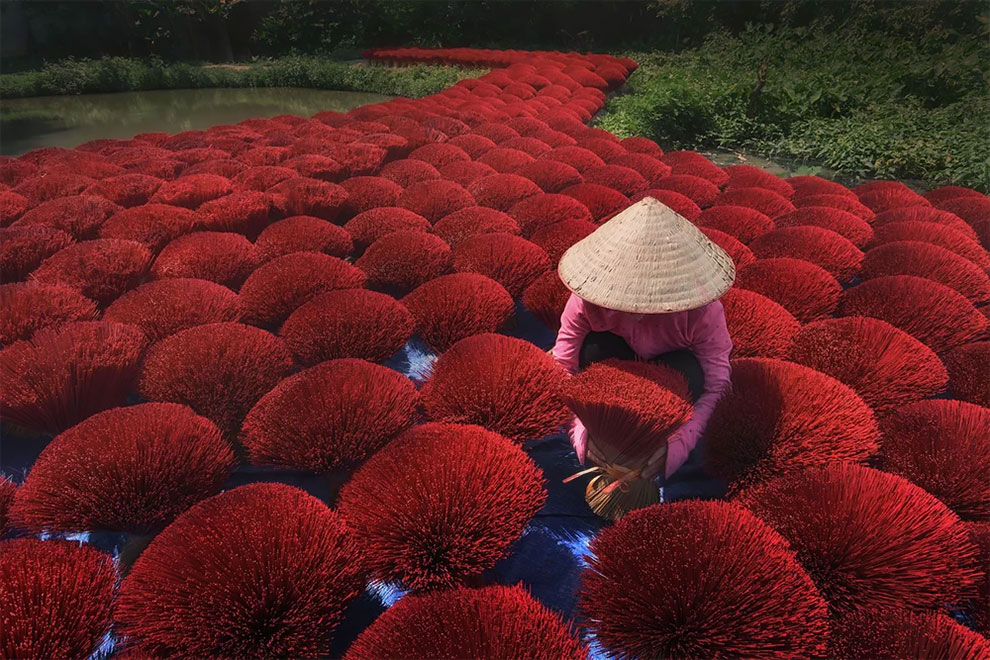 Honorable Mention in Splash of Colors. In Vietnam, red is the color of good luck and is traditionally considered the symbolic color of happiness. Joss sticks are offered at altars to obtain good business and good fortune (Credit: Sian Koi Kua) 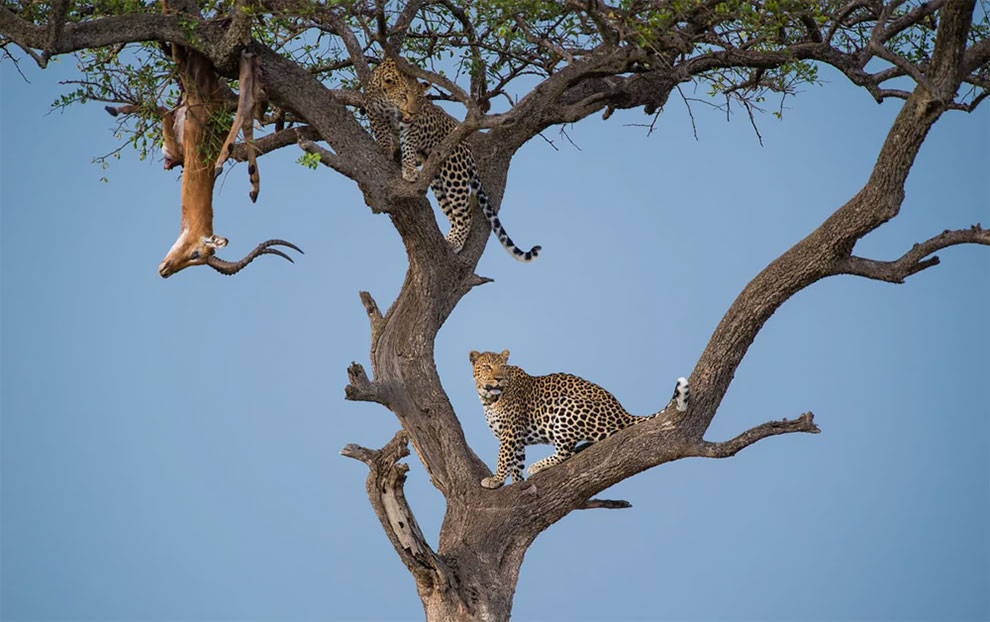 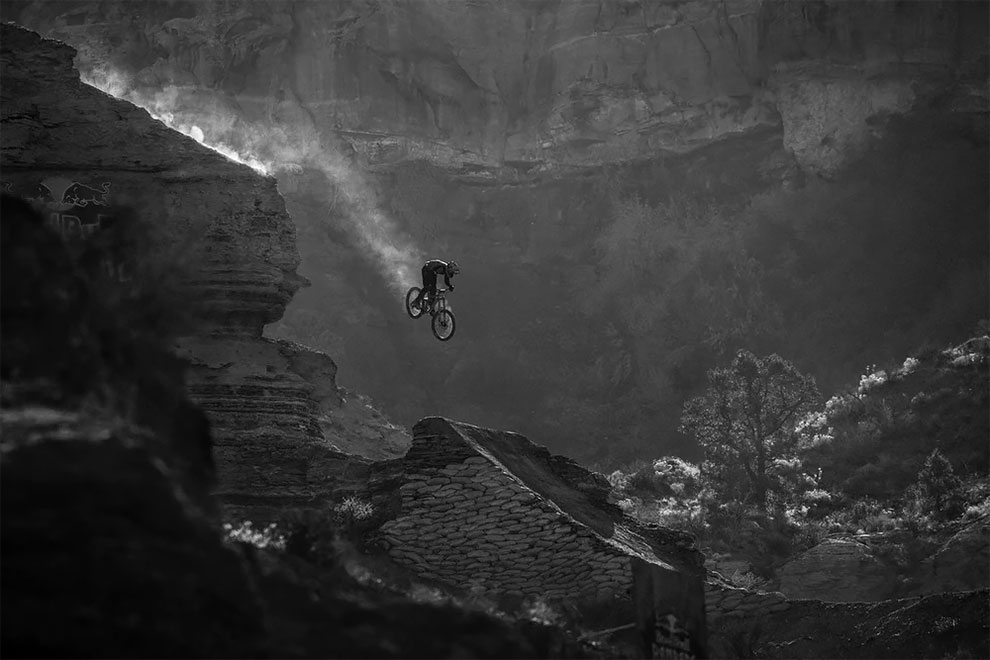 Honorable Mention in Sports in Action. The Red Bull Rampage, held near Zion National Park, has become one of the biggest mountain biking events of the year (Credit: Carsten Snejbjerg) 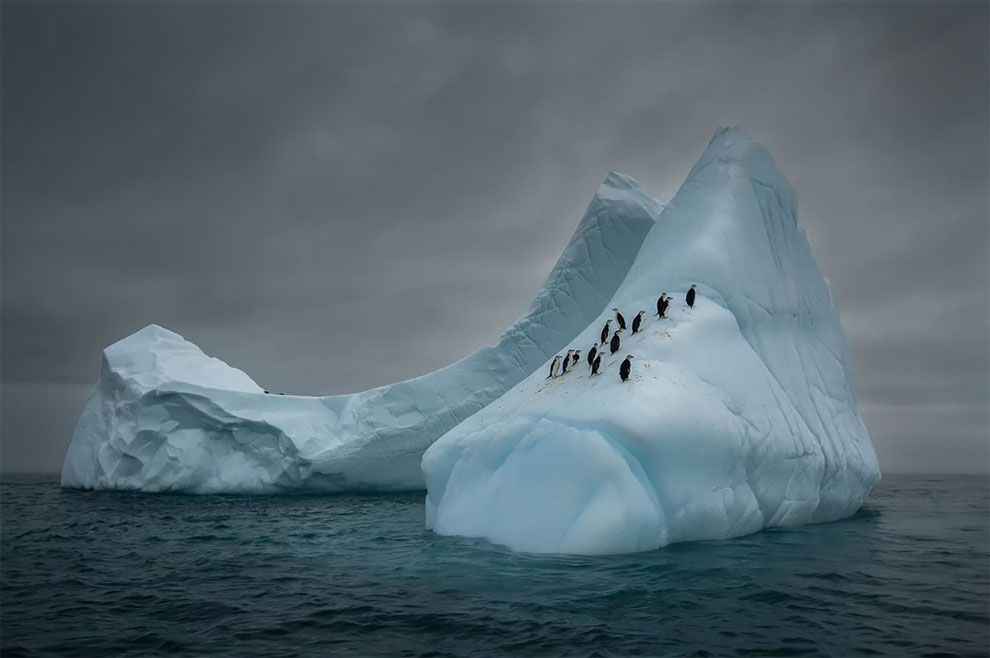 Third Place in The Beauty of Nature. A group of Chinstrap Penguins (Pygoscelis Antarctica) is resting on an iceberg (Credit: Mariusz Potocki) 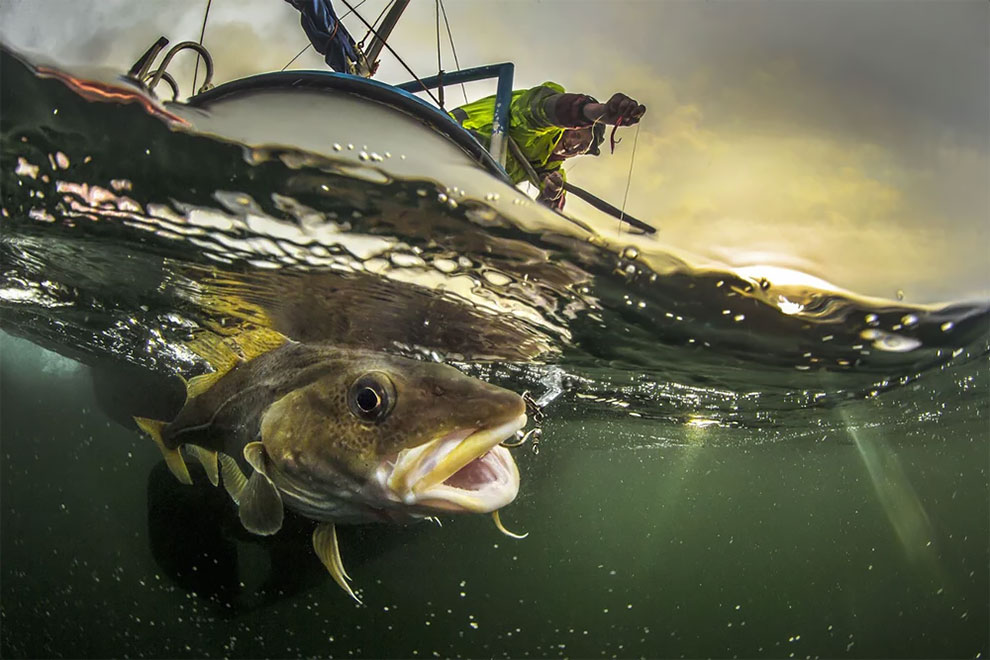 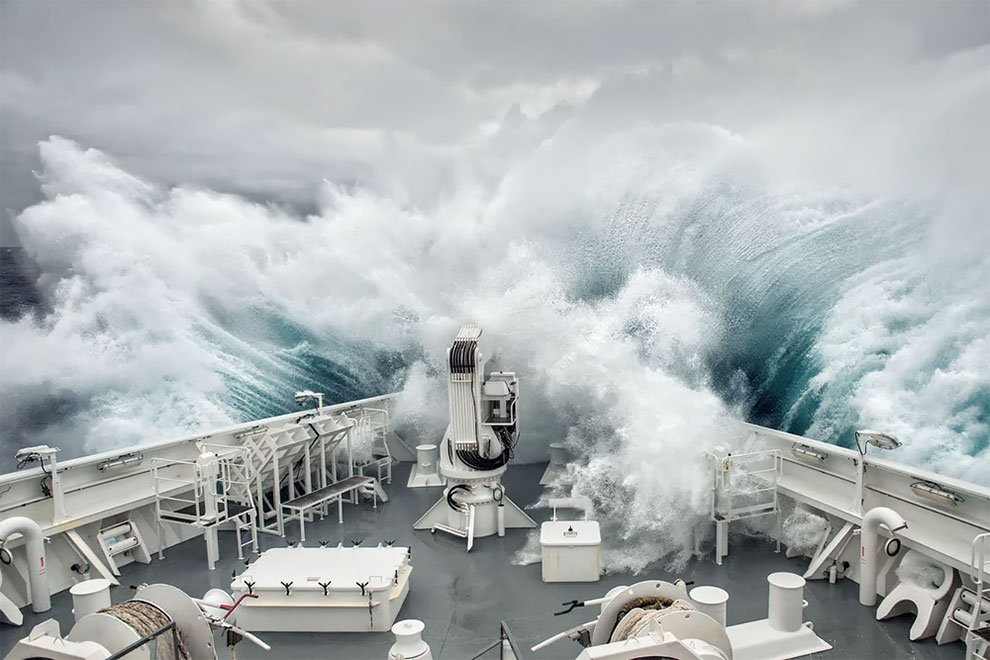 Third place in Journeys and Adventures. In the Drake Passage, between Cape Horn and Antarctica, a 12-meter wave pounds the boat’s forecastle with its enormous splashes (Credit: Lorraine Turci) 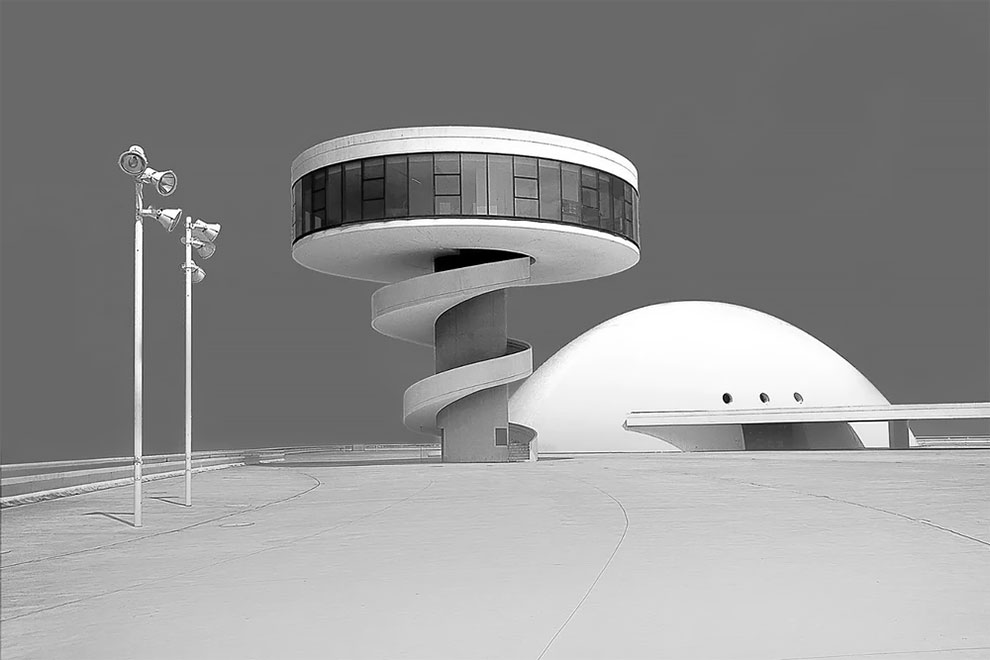 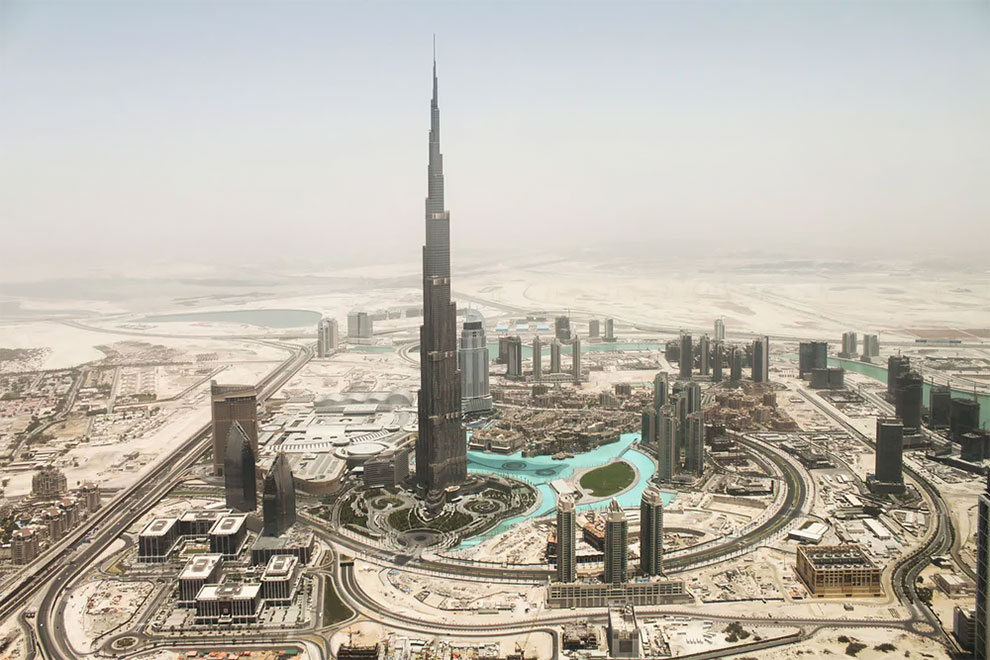 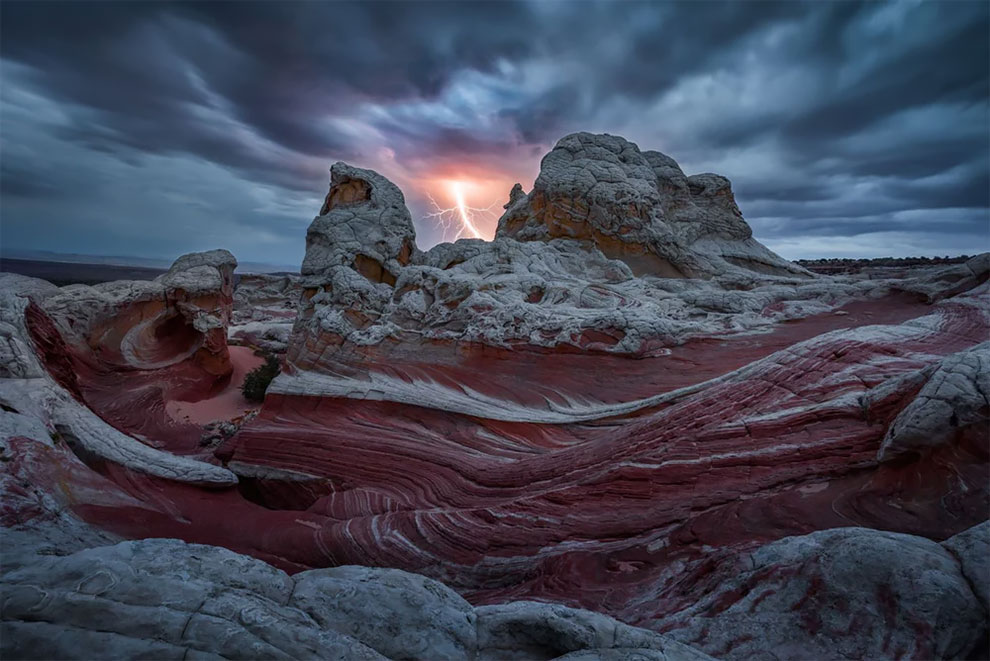 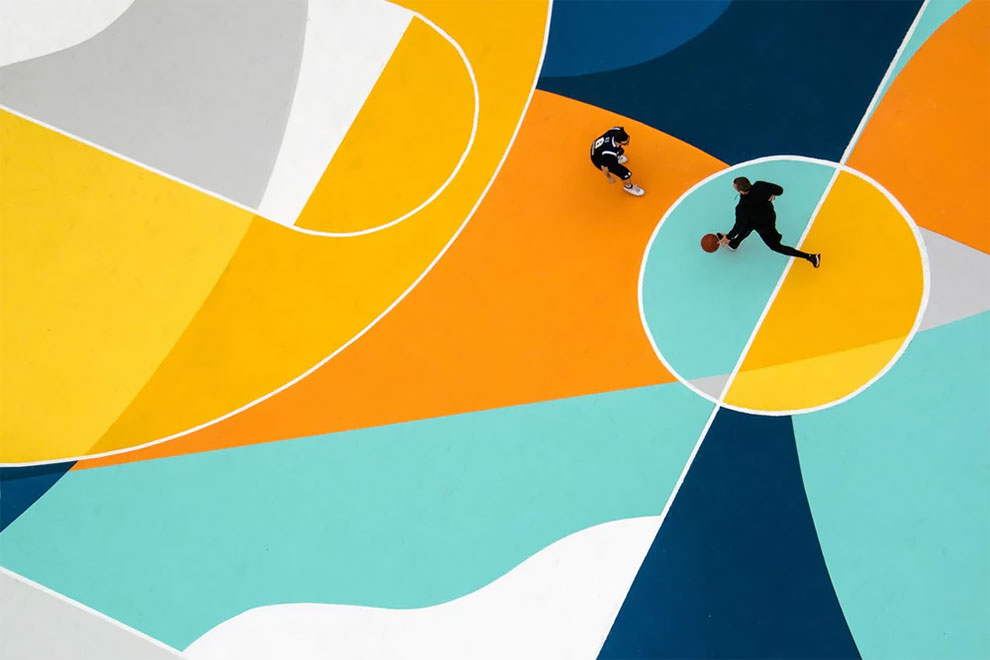 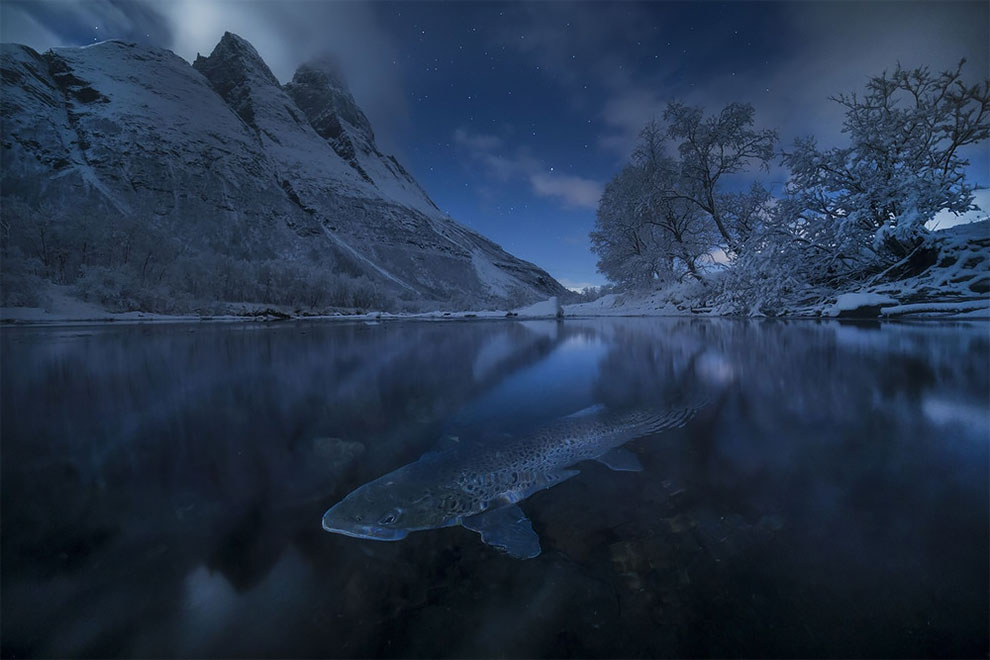 Polar Trout, Norway, by Audun Rikardsen. At Signaldalen, northern Norway, a brown trout is captured spawning under the stars on a moonlit night. Honourable mention, the Beauty of Nature category. (Photo by Audun Rikardsen/SIPA Contest) 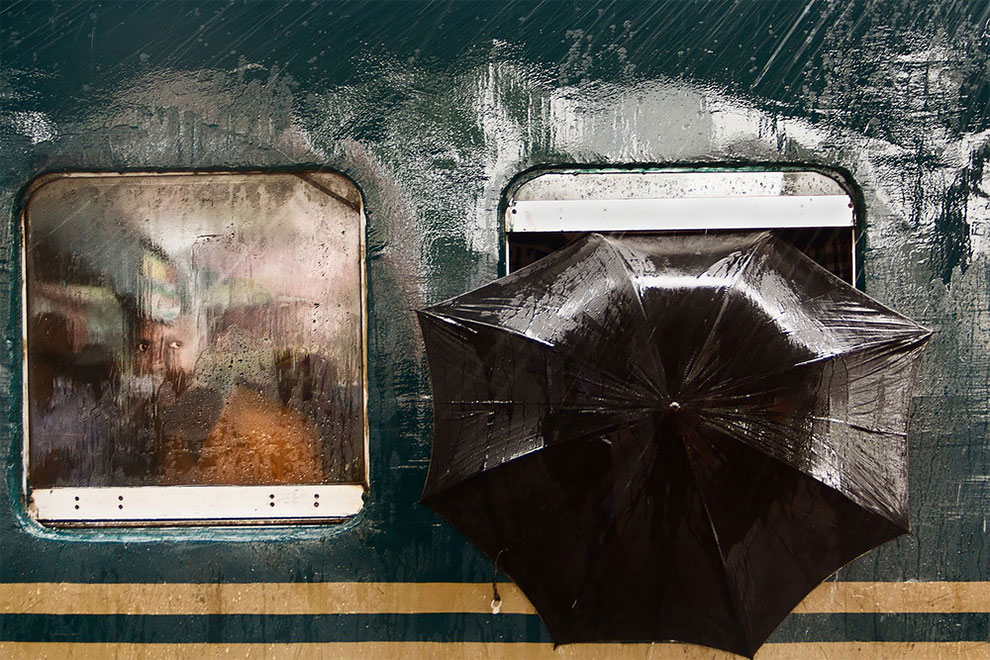 The Man Staring, Bangladesh, by Moin Ahmed. A train from the country arrived at Tongi railway station, Gazipur, and I found a pair of curious eyes staring at me through the window. The mist on the glass and the curious eyes create a dreamy atmosphere on a journey towards the city that is full of hopes and dreams. Honourable mention, Journeys and Adventures category. (Photo by Moin Ahmed/SIPA Contest) 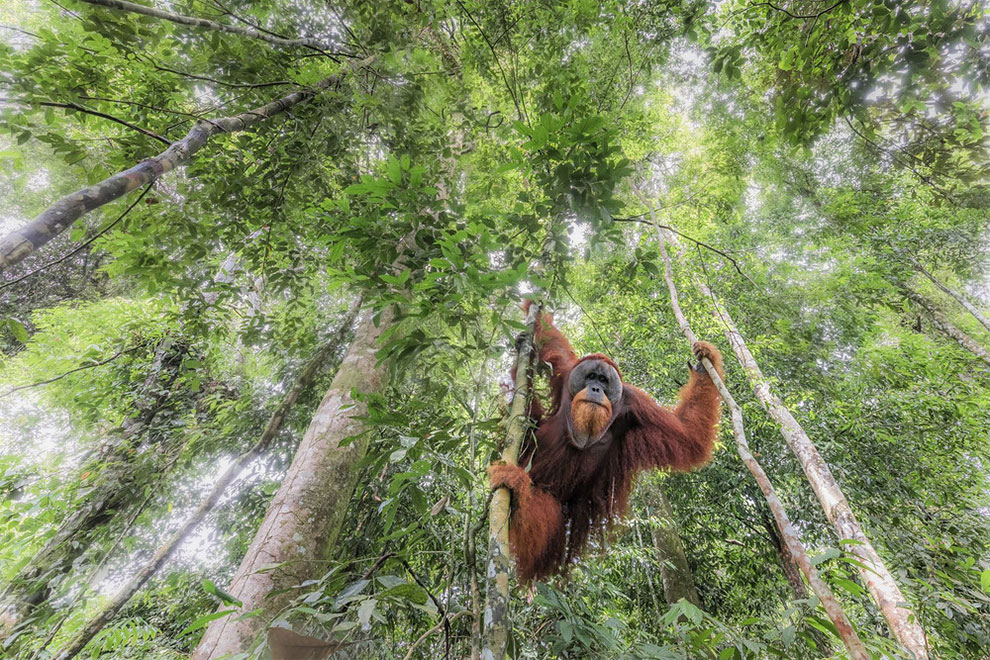 Hanging in the Primary Forest, Indonesia, by Marco Gaiotti. A wild Sumatran orangutan in Gunung Leuser national park, northern Sumatra. This species is critically endangered due to habitat loss through palm oil exploitation and logging. We found this big male while hiking into the forest, and it gradually became confident enough to allow me to take some wide-angle shots. Honourable mention, Animals in their Environment category. (Photo by Marco Gaiotti/SIPA Contest)

The Lady of Snæfellsnes, Iceland, by Timothy Moon. A mountain with a human-like form on the Snæfellsnes peninsula, western Iceland, in vivid autumn colours. Honourable mention, the Beauty of Nature category. (Photo by Timothy Moon/SIPA Contest) 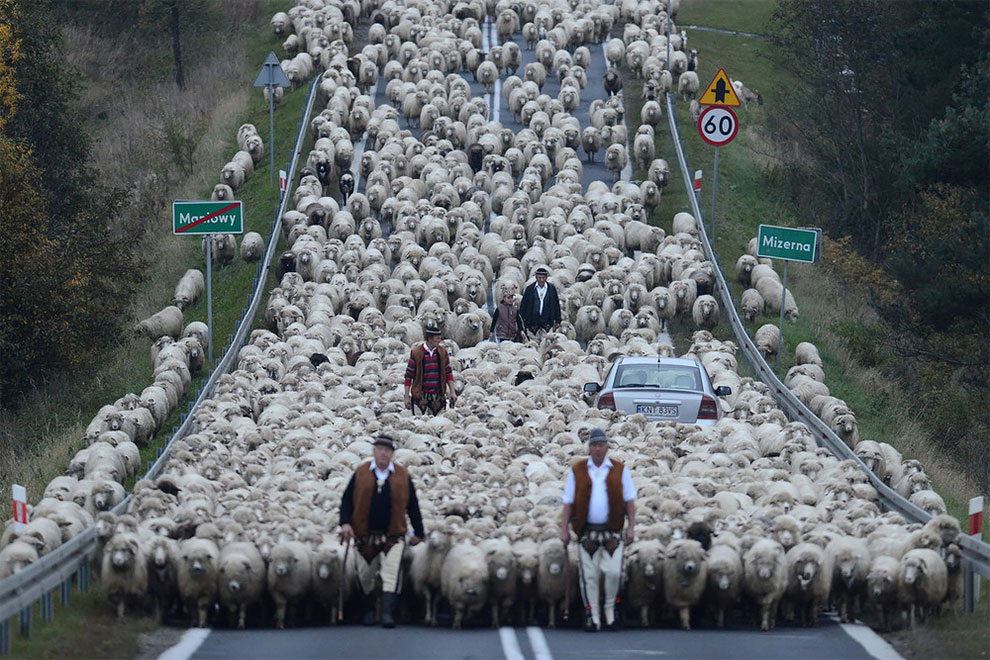 “Redyk”, Poland, by Bartłomiej Jurecki. From the Low Beskid Mountains, shepherds bring herds of more than 1,500 sheep to the area around the town of Nowy Targ after the redyk (traditional grazing time), where the owners will take care of them during the winter. The animals will go back to the mountains in spring. Honourable mention, Journeys and Adventures category. (Photo by Bartłomiej Jurecki/SIPA Contest) 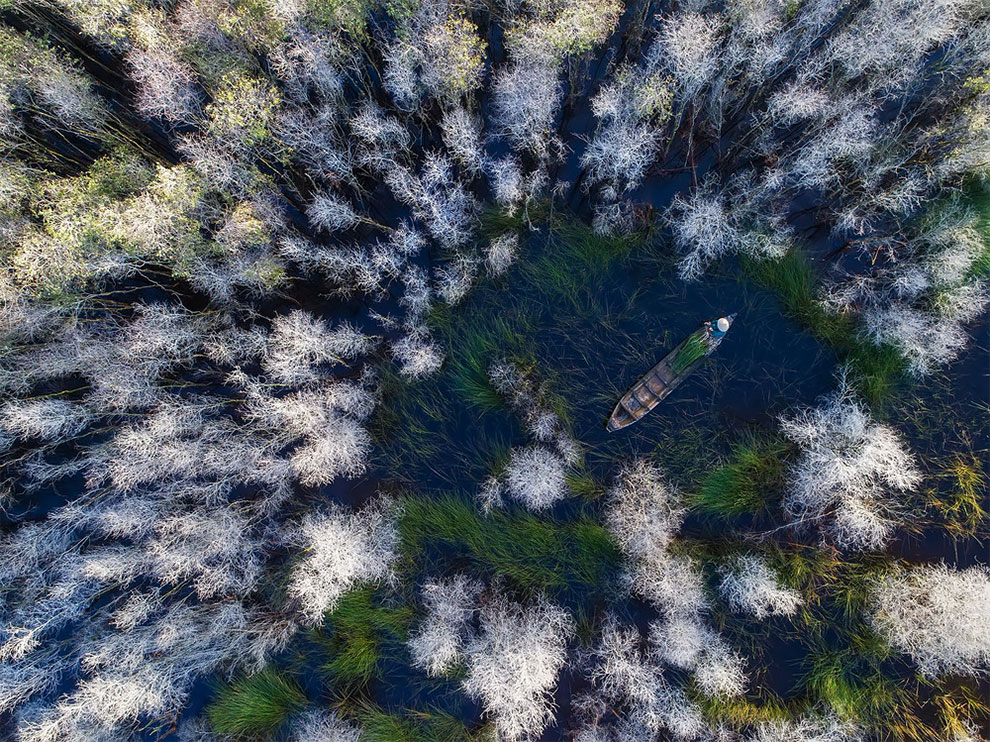 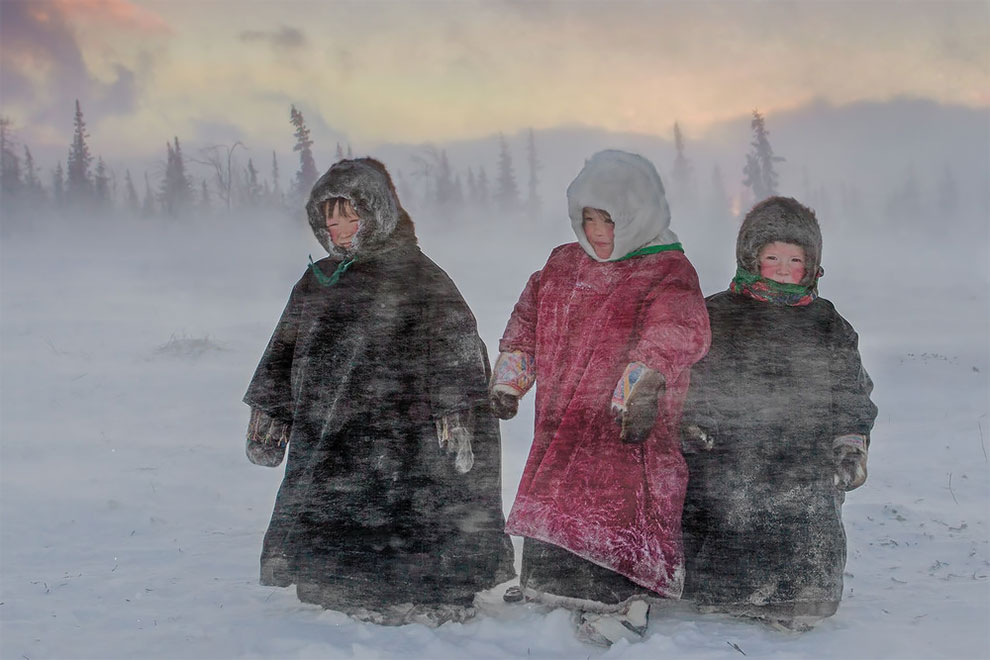 Judging America: Prejudice By Alternating Between Judgment And Reality By Joel Parés
Dreamy Photographs Of Young Women Taken By David Hamilton From The 1970s
2015 National Geographic Traveler Photo Contest – April selects
Couple Poses With Gas Masks For Their Wedding Photos To Protest Heavy Pollution In China
Sony World Photography Award Winners
'Shall We Dance' - Photographer Shawn Danker Captures Dancers On The Streets Around The World
Daredevil Photographer Escapes Security Guards To Climb Up The World's Most Famous Buildings
"Orcs Of New York" Is The Brilliant Facebook Parody You Need To Be Following
This Guy Photoshops His Dog Into A Giant In All His Pics And It’s Hilarious
These Action Shots Show Talented Athletes Practicing Yoga Poses In Iconic City Locations
Emily Blincoe - Sweets Arranged by Colour
Artist Makes A Fun Virtual Road Trip With Her Photoshopped Family
Innovative Skyscraper Designs That Were Selected As The Winners And Honorable Mentions Of The 2021-2022 eVolo Magazine Skyscraper Competition
Daredevil Japanese Photographer Explores Urban Landscapes From A New Perspective
Wonderful Photos Capture The Beach Lives Of North Carolina In The Summer Of 1975
The Spirit of Post-Apocalyptic Russia Through the Incredible Atmospheric Photographs of Alexander Sukharev
Magical Slavic Photography From Russia Is So Impressive That It Looks Unreal
Photographer Vitor Schietti Captures Dream-Like Forests of Falling Light
"Belfast Kids": Photographer Dave Sinclair Shows Us the Faces and Lives of Children in The City Affected by Social and Political Change and Upheaval
A Human Science Teacher Who Is Passionate About Capturing The Human Condition In The Streets
See How the Hollywood Sign Has Changed from between the 1920s and 1970s
Japanese Photographer Captures Breathtaking Shots of Shrine in A Swirling Sea of Fireflies
Gorgeous Fashion And Beauty Photography By Ellen Simone
Inside Ciccolella, Italy's Leading Producer of Cut Flowers
contest, photography, siena, winners