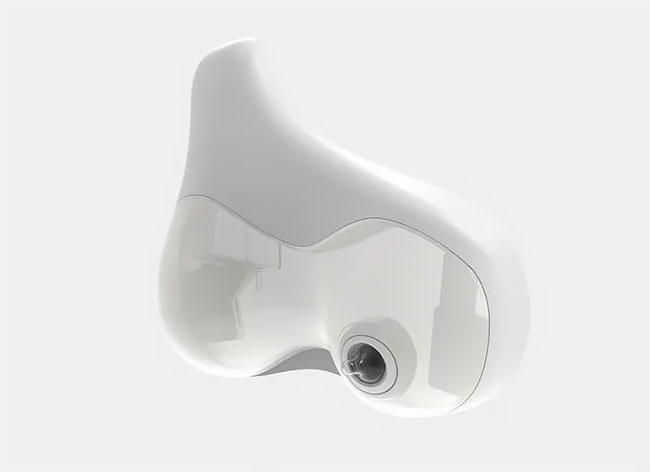 Fathers sometimes like to say that they can do anything mothers can, except give birth and breastfeed. Well, thanks to a new device developed by Japanese company Dentsu, breastfeeding babies may not be a problem for fathers in the near future.

Recently unveiled at the SXSW festival in Austin, Texas, the Father’s Nursing Assistant is an intriguing, if somewhat bizarre, gadget that aims to allow fathers to help out with stressful tasks usually reserved for mothers. Data shows that much of the parental stress and difficulties associated with taking care of a baby are related to feeding and sleeping, responsibilities in which fathers’ participation tends to be low. In order to get fathers more involved and relieve some of the burden off mothers, Japanese corporation Dentsu has created a wearable milk or formula tank shaped as a pair of female breasts, which allows men to breastfeed children.

Dentsu states in a press release: “The amount of time infants in Japan spend sleeping is shorter compared to the rest of the world. Much of the parental stress and difficulties surrounding childrearing are related to feeding and sleeping, and generally the rate of participation by fathers tends to be low. Breastfeeding is also effective at helping the parent sleep–a benefit that is currently skewed toward women. 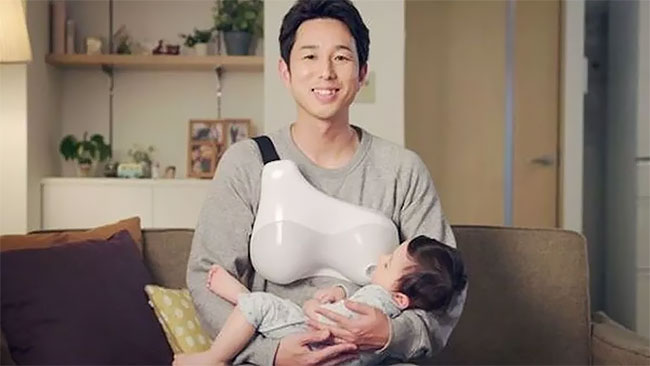 Focusing on breastfeeding, we aim to decrease the amount of burden on mothers and increase the amount of time infants sleep by enabling fathers to breastfeed. This is realized with the FATHER’S NURSING ASSISTANT wearable device. Based on advice from pediatricians and babysitters, who say that babies tend to touch the breast with their hands when feeding and that the softness seems to sooth them, the product has been shaped to resemble a woman’s breasts. As a result, a father can hold his baby in both of his arms, creating a deeper skin ship between them and enabling the baby to sleep peacefully in his father’s arms. Father’s Nursing Assistant has a tank for milk on one side and the breastfeeding system on the other. The device also senses the infant’s breastfeeding and sleep timing and is linked to an app that facilitates a better, visual understanding of the infant’s condition.”

Life, Death And Dreams: The Beautiful And Fashionable Art Of Shikimi
Made From Recycled Plastic Bottles, This Expandable, Reusable Face Mask Adjusts To All Face Shapes And Sizes
Japanese Illustrator Suzusiro Puts Maids On Skateboards And We Can’t Complain
Urban Explorer Makes Fantastic Photos of The Abandoned Radio Station to Seek For Traces of Extra-Terrestrial Civilizations
This Clock Has A Levitating Sphere That Tells The Time
Samurai Bottle Helmets Are Here To Fiercely And Elegantly Adorn Your Bottles Of Booze
The Kollie - Cybernetic Organism
This Tiny Prefab Home Inflates Itself With Body Heat
"Big In Japan": 30 Times People Traveled To Japan And Realized They’re Too Tall For It
Amazing Vintage Photographs Of The TC-497 Overland Train Mark II, The Longest Offroad Vehicle In The World
There's a Gaming Pc Hidden Inside This Incredible Gaming Den Diorama
Japanese Sculptor Shows How He Transforms Wood Into Surreal Sculptures
This Novelty Pillow Lets You Sleep An A Gorilla’s Chest
Spectacular Winning Images of The Tokyo International Foto Awards 2020
This Ingenious Car From 1923 Turned Into A Boat
Happy Cats, Coffee Shops And Carefree Times In TAO’s Cheerful, Detailed And Nostalgic Illustrations
Small Wonders in the Water
A Physicist Does 3D Printing Project With His Son: Builds A Full-Scale Lamborghini
The Superb Concept Art Works by the Russian Artist Nikolay Kurganov
Japanese Photographer Captures Stunning Images Of "Time-Traveling Samurai"
Teaser: Nissan LEAF to Attempt Setting the Guinness World Speed Record
The Proliferation Of Nostalgia-Inducing LEGO Sets Indicates That They're Far More Than Just A Child's Toy
Race Driver Ralf Schumacher Buys Classic Russian Offroad "Niva" Car
This Japanese Artist Imagined What Cats Would Look Like As Anime Girls
assistant, breastfeeding, dentsu, device, father, japan

Real Life Sized Soviet Era Motorbike Made Of Wood
Japanese Artist Man Creates Complex Objects out Of Twisted Balloons
A $2 Million Porsche-Designed RV Has A Full Bedroom And Bathroom
Cuddle Up To Super Realistic Fish Buddies With Japanese Fishy Stuffed Animal Series
Assembly: A Sense of Comfort through Proximity
Pandemics Past, Green Futures Merge in Ceramic Gas Mask Pot from Franco-Japanese Project
This Guy Transformed A 1961 VW Beetle Deluxe Into A Black Matte Roadster
Toyota Has Made A New Concept Car Out Of Wood
"The Final Fantasy": The Superb Heroic Artworks of Christian Angel
1959 Ghia Selene by Tom Tjaarda, an Amazing Concept From Future Past From Italy
2007 ‒ 2022 by Design You Trust. Proudly hosted by WebHostingBuzz.
Privacy Policy · Terms of Service · Content Removal Policy ❤️ 🇺🇦