A Giant Cosmonaut Yury Gagarin Lands On A Mural Outside Moscow, Russia 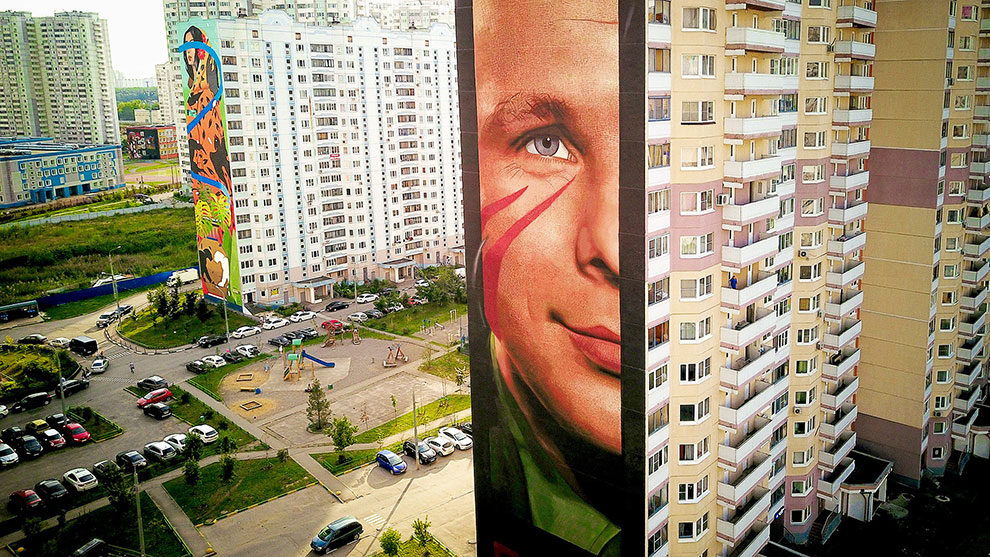 Famous artists from around the world were brought to a stereotypical district with high-rise buildings near Moscow. And then they were told the buildings were a blank canvas… Here’s what they came up with! 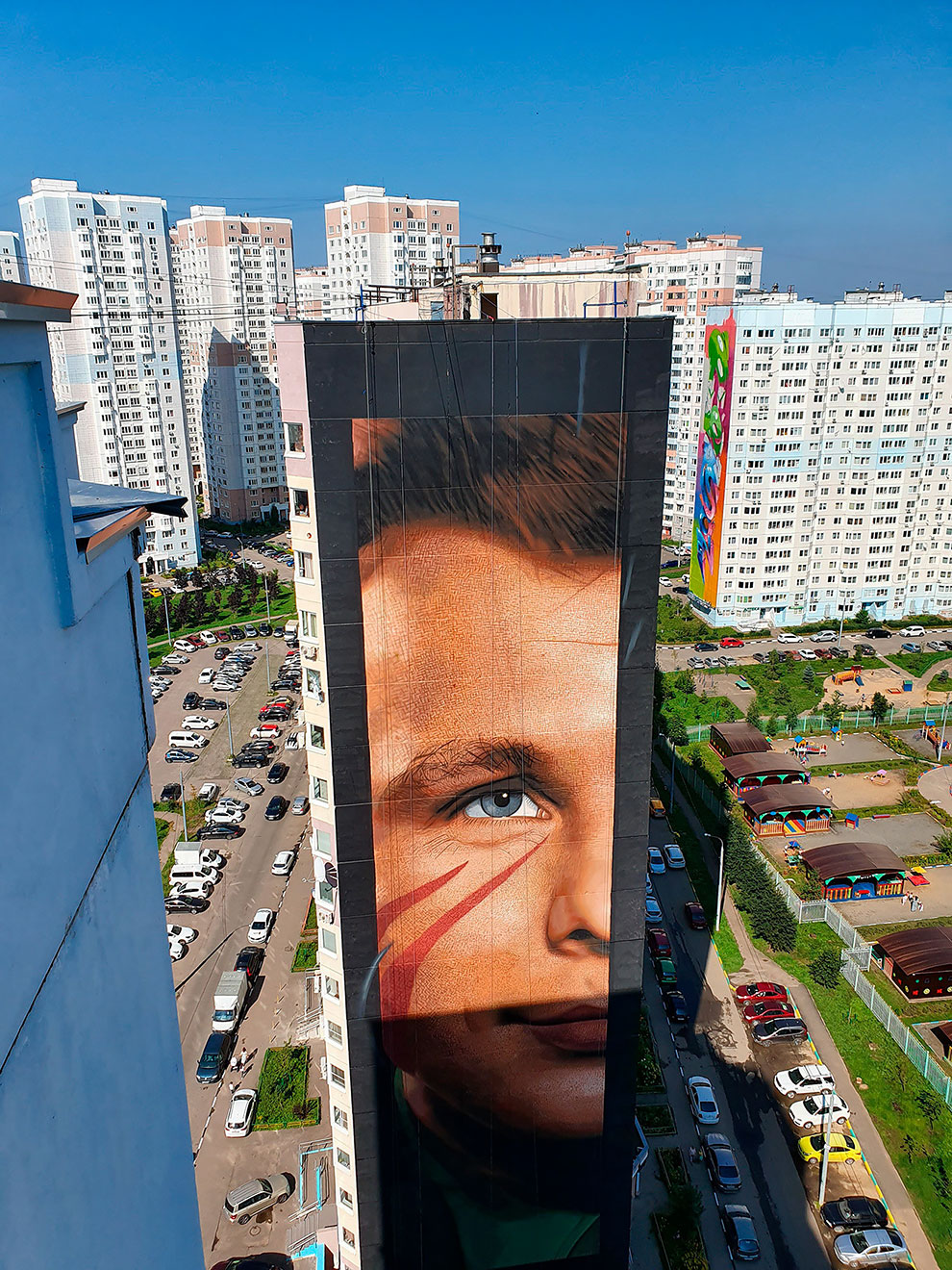 Throughout August, more than 60 street artists from Russia, USA, Canada, Italy, Argentin, China and many other countries have been painting the facades of residential buildings in Moscow Region’s district of Odintsovo, as part of Russia’s super hip ‘Urban Morphogenesis’ Street Art Festival. 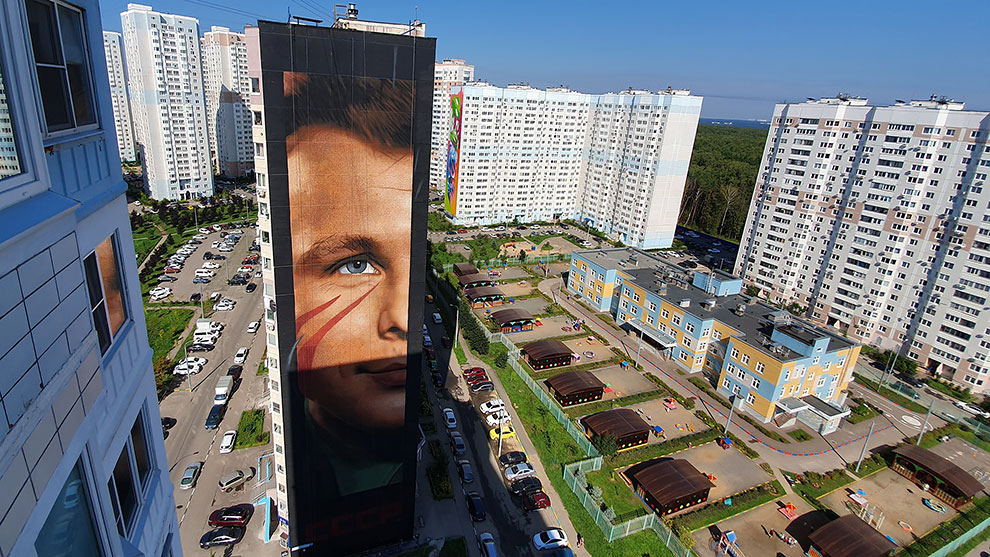 These unremarkable 20-story concrete slabs, located about 19 km from Red Square, became the ‘canvas’ of a part of a large-scale experiment: the artists were permitted to paint on all facades (that’s over 35,000 sq. meters!) with just one condition – it had to be completed within one month. Earlier, a similar art-experiment had been held in the Polish city of Lodz. 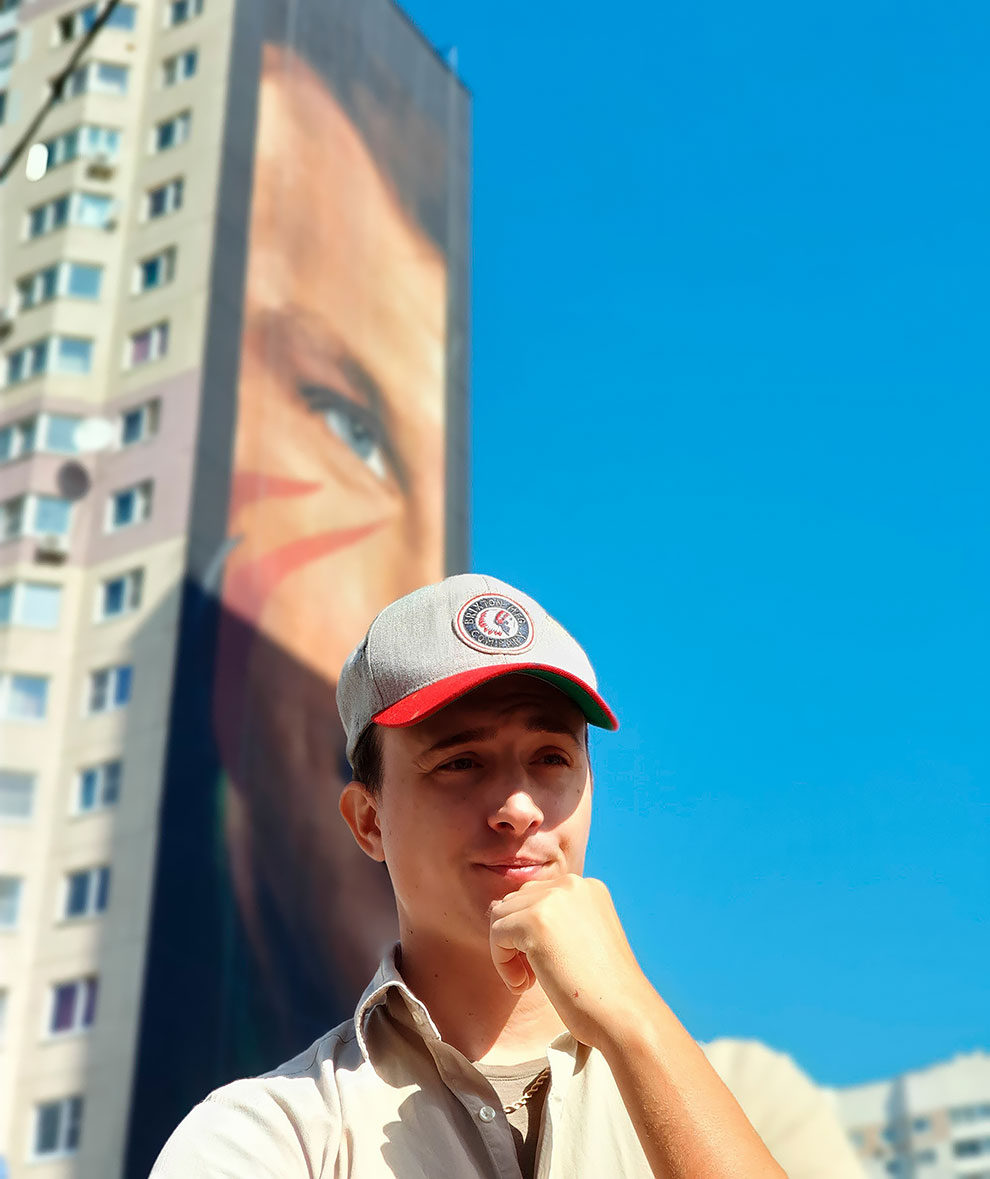 And one of these monumental paintings is the biggest mural yet of famous Russian cosmonaut, Yury Gagarin, that was created by artist Jorit Agoch (previously) from Naples, Italy.

You can check out some more startling examples here: 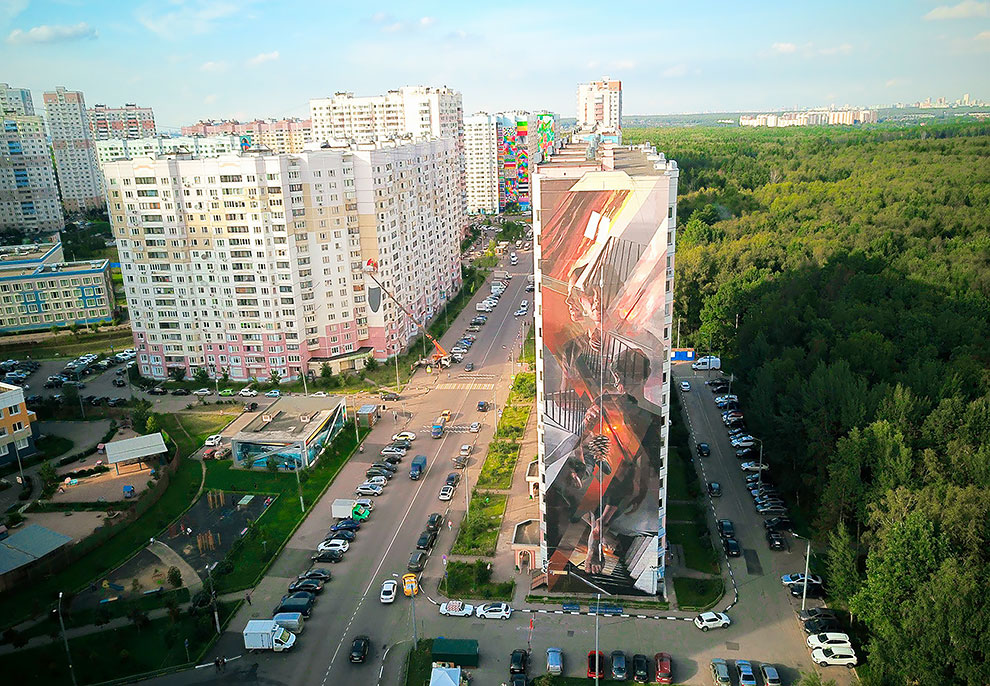 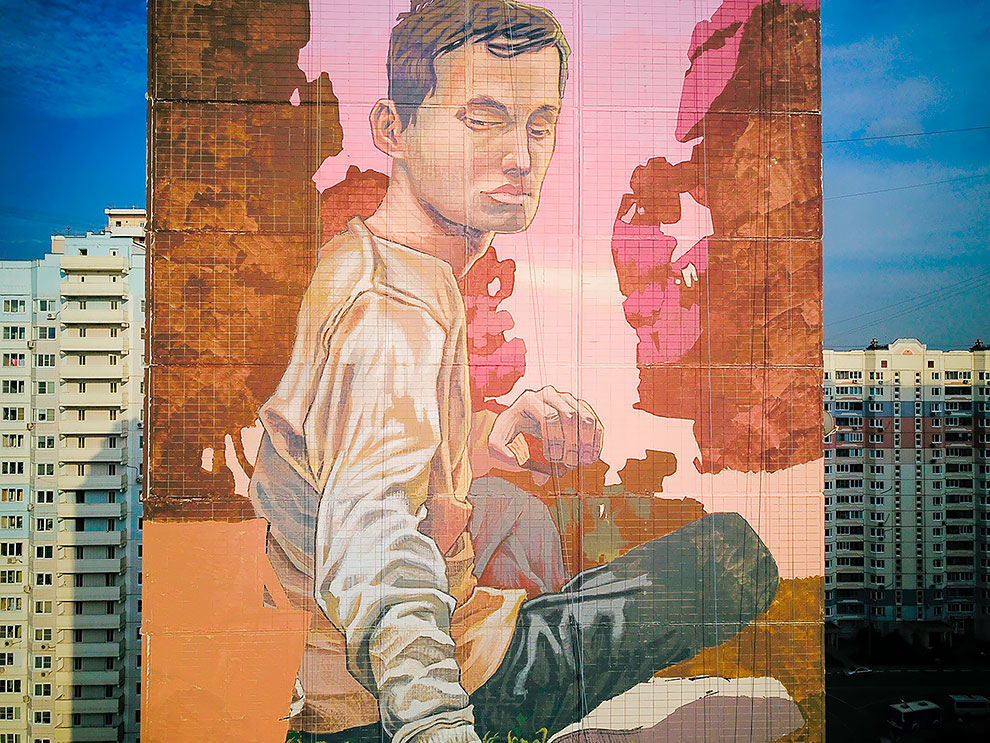 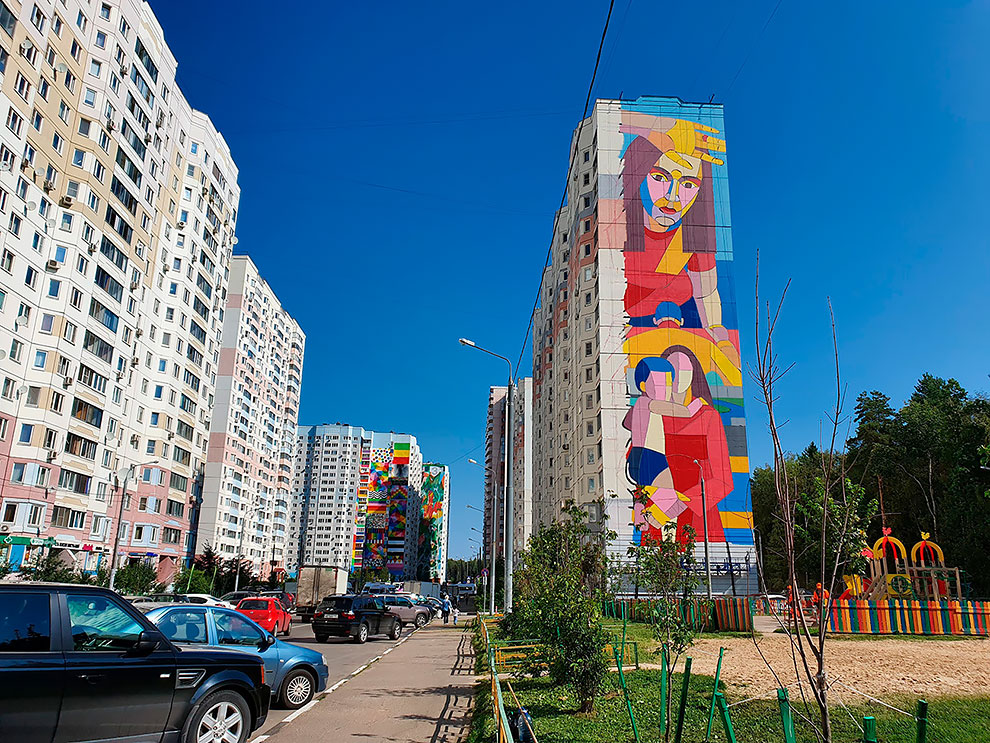 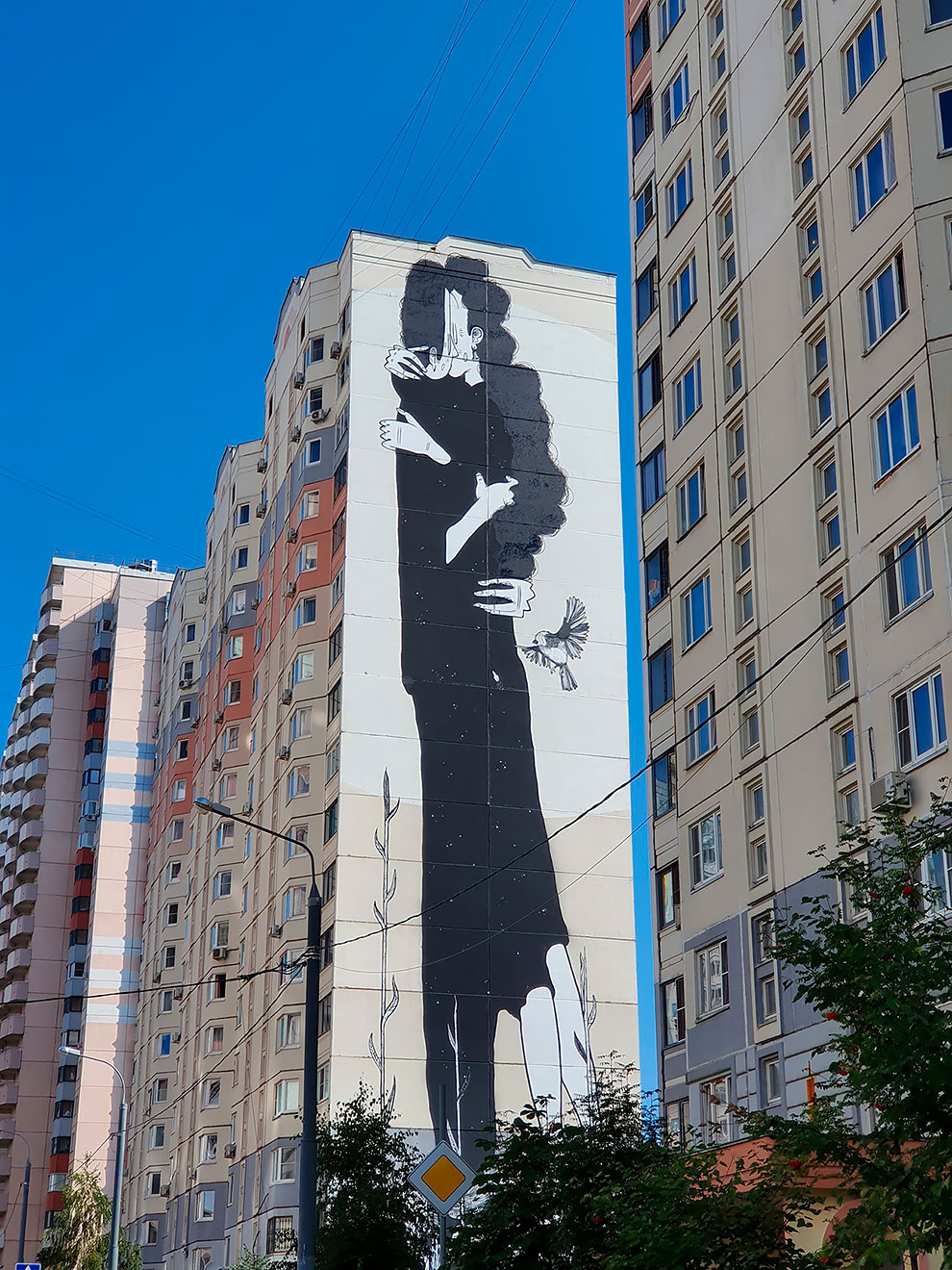 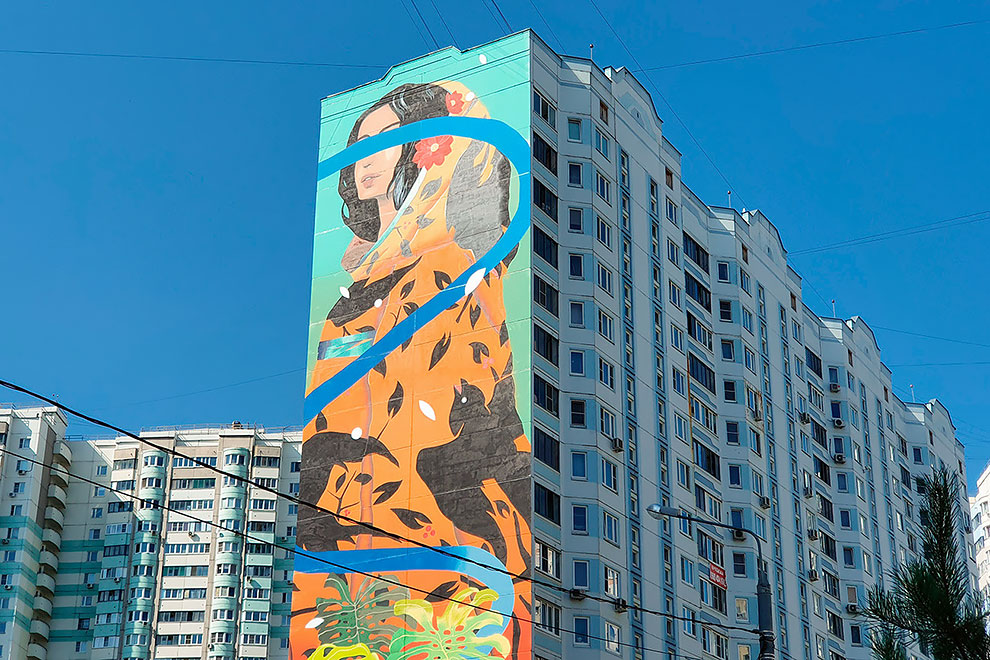 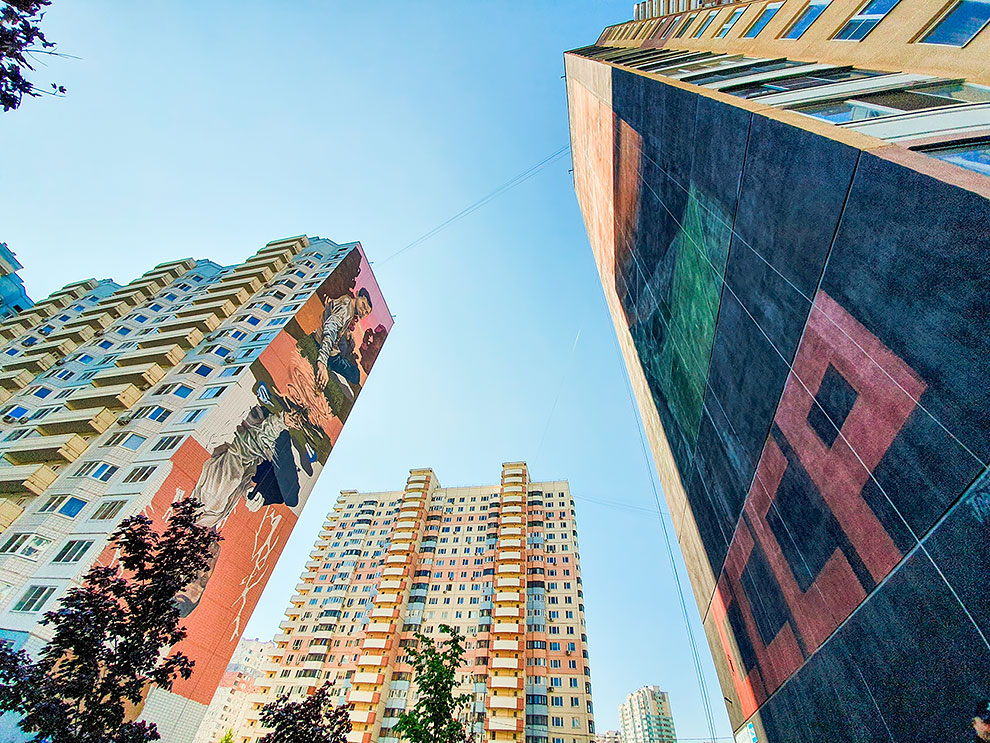 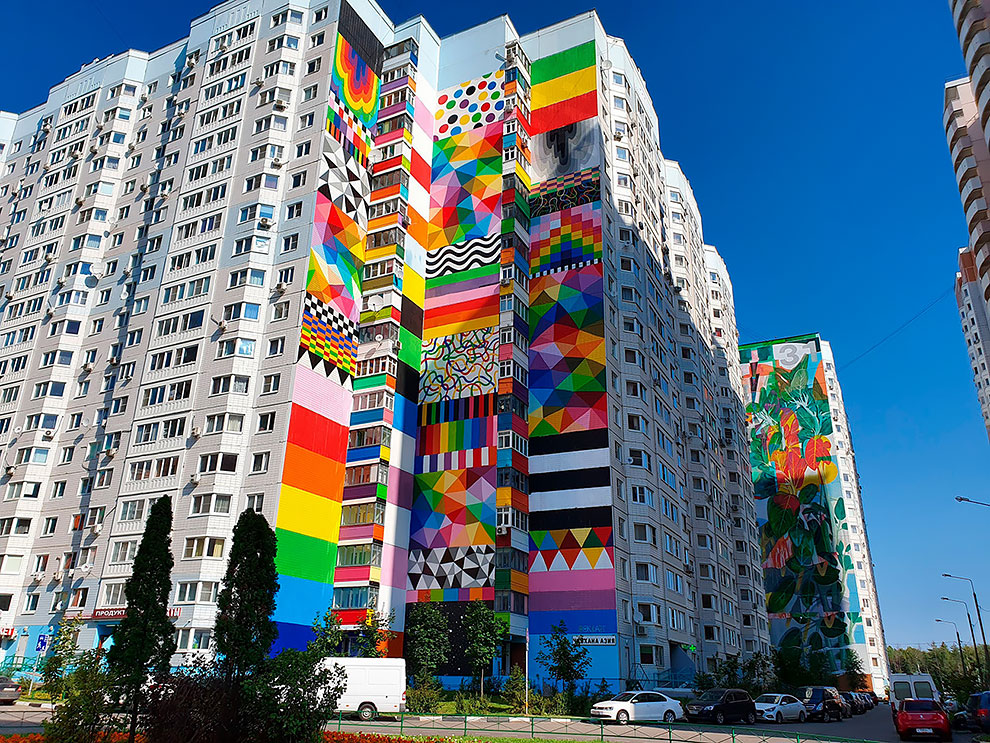 British Designer Liam Hopkins Creates A Full-Sized Cardboard Car For ŠKODA
Enthusiasts Are Installing Transformer Robots Made of Waste Car Components in The City of Donetsk, Ukraine
Heat-Changing Mug Reveals The Aurora Borealis When Filled With A Hot Drink
South Korean Live Food Festival
Artist Creates Impressive Sculptures From Marble That Look Surprisingly Light
Abandoned Floating Submarine Base PB-24. The Only One Located In Russia.
These Photos Were Taken At Burning Man Festivals On Three Different Continents Show How Different They Are
This Restaurant Is Designed To Look Like A Teddy Bear Factory
Godzilla And Fellow Kaiju Monsters Apologise At Japanese Press Conference For Acts Of Destruction
Russian Ex-Pilot Turns His House Into Incredible Steampunk Museum
Absolutely Amazing Tattoo Tights For Impressive Outfit
These Gross, Weirdly Beautiful “Pollution Popsicles” Are Made From 100% Pure Sewage
You Can Now Get Cat Sticker To Cover Up Racist Graffiti You Find On The Streets
Italian Guy Recreates Celebrity Outfits With Household Items
This Japanese-Made Sleeping Cat Sand Sculpture Molds Turn The World Into Feline Heaven
This Realistic “Girlfriend Hand” iPhone Case Promises To Keep You Company
Sculptor Spends 2 Years To Build Knife Angel Out Of 100,000 Weapons, However Government Rejects It
With This Simple Weightlifting Kit You Can Make Your Fingers Stronger
Unexpected Land Art Beautifully Formed In Nature
College Student Makes Masks For The Deaf & Hard Of Hearing Community
After A Breakup, This Artist Made His Own Boyfriend Out Of Wine Boxes
Shopikon: Your Guide to the Best Local Stores
Japanese Designer Crafts Adorably Lifelike Cat Backpack
Banksy Shares New Mural in Ruined Ukrainian Building in Borodyanka
festival, Gagarin, moscow, murals, russia, streetart