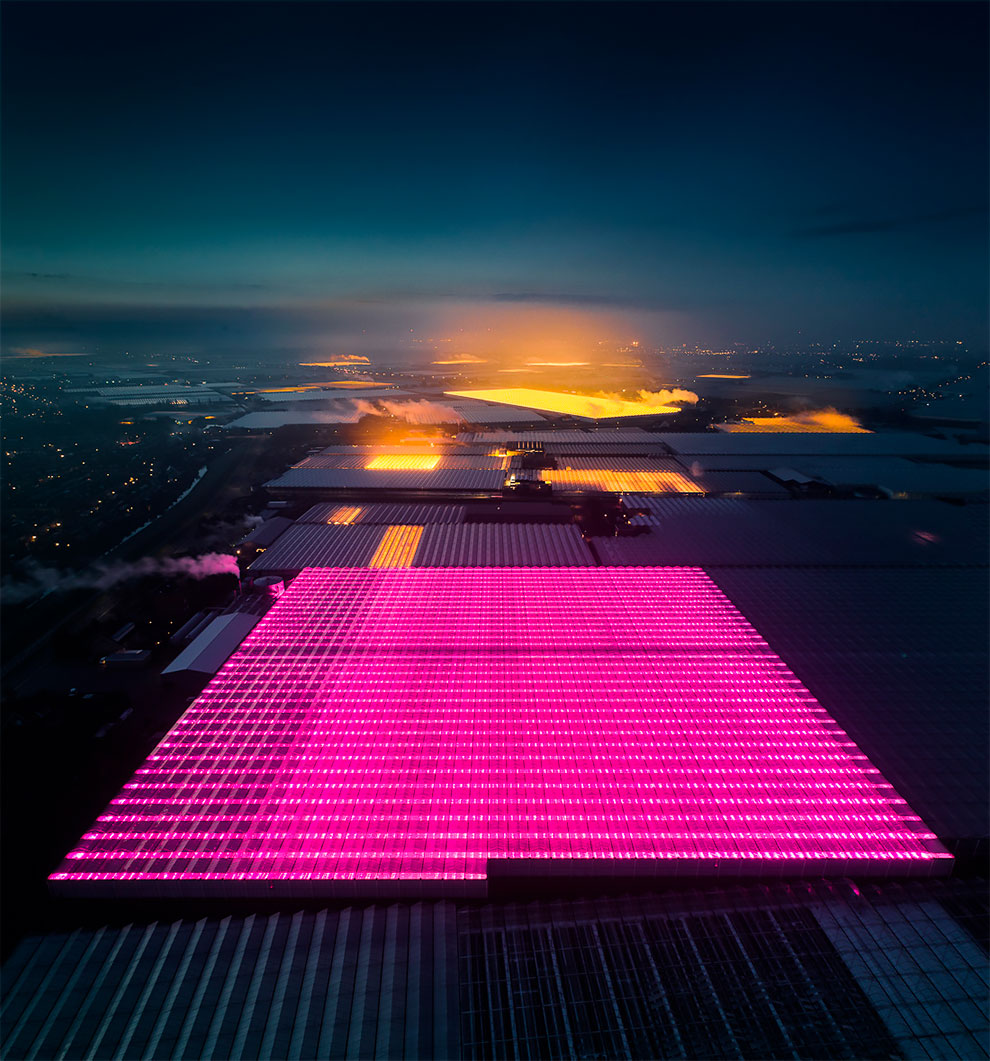 German photographer Tom Hegen, who specializes in aerial photography, recently traveled to the Netherlands to document the country’s LED greenhouses.

According to the United Nations, the world’s population will grow from today’s 7.5 billion people to 10 billion in 2050. And as natural resources like farmland and water become scarce, feeding the world will become an even greater challenge. Researchers in the Netherlands are experimenting with one way to feed more people with using less land, by growing crops indoors.

At inside temperatures above 20 degrees, constant humidity of around 80 percent and the use of LED lighting to permit precisely cultivation, in order to produce year-round. The indoor gardens provide growing conditions for plants like tomatoes, peppers or strawberries around the clock and in every kind of weather, which doubles the average yield of an outdoor farm. The Netherlands is the globe’s number two exporter of food as measured by value, second only to the United States, which has 270 times its landmass.

The Dutch have created the most advanced area in the world for controlled environment agriculture and have become world leaders in agricultural innovation. However, there are also consequences this growing method brings with it, like light pollution or growing crops out of season and ship them around the world, so people can eat strawberries year-round. Ordinances have been developed in which up to 98% of the electric lighting must be contained within a greenhouse facility by using blackout screens and curtains along the sides and roofs. 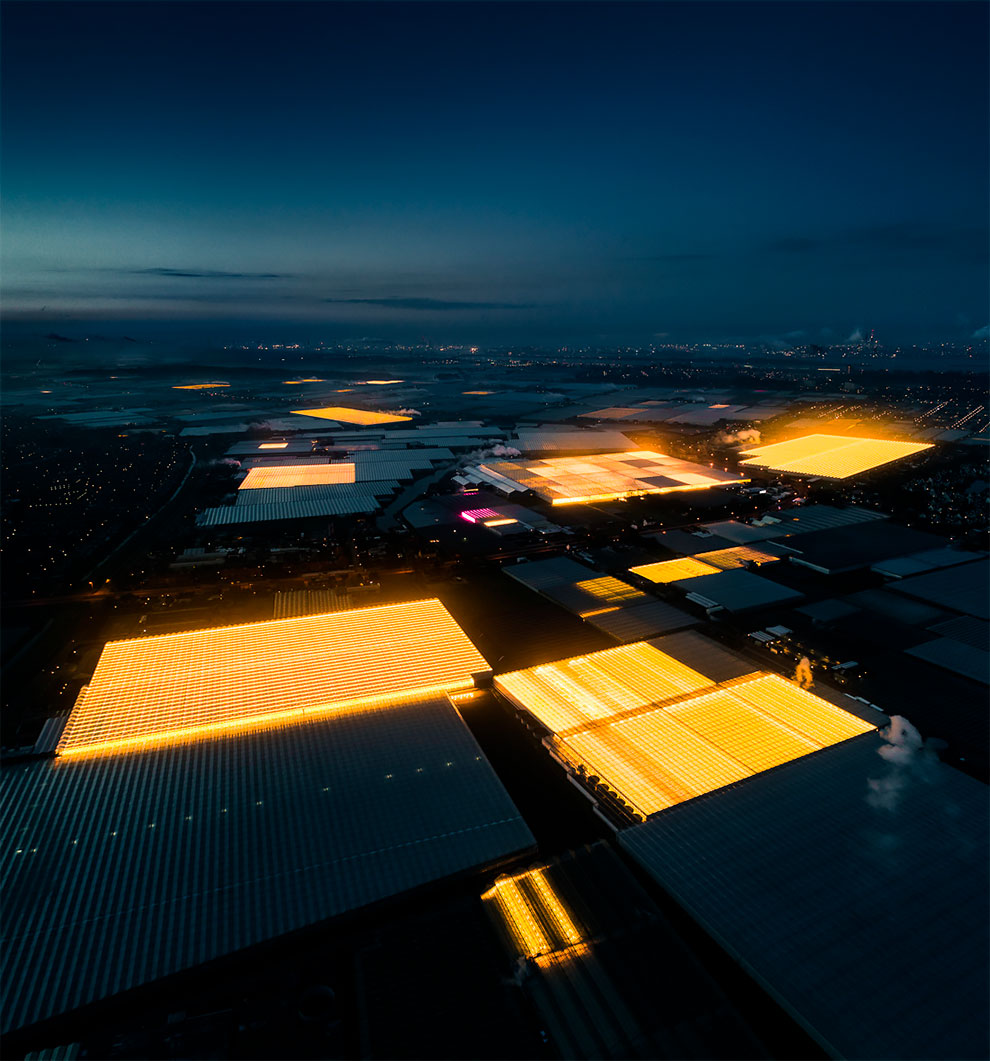 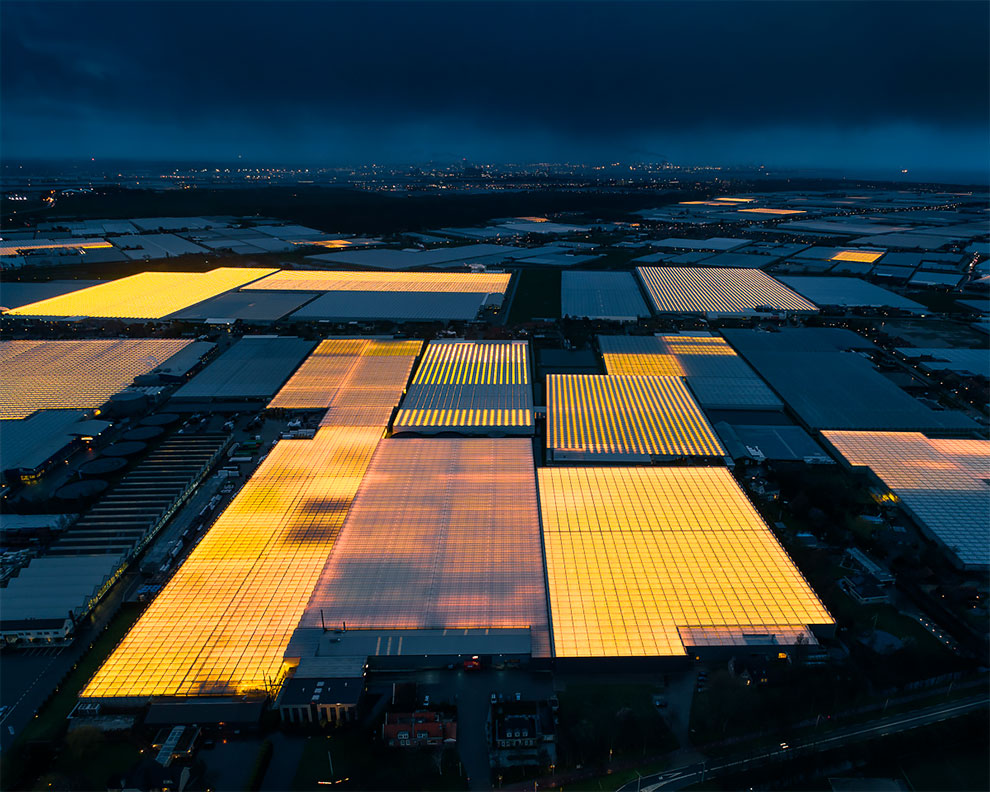 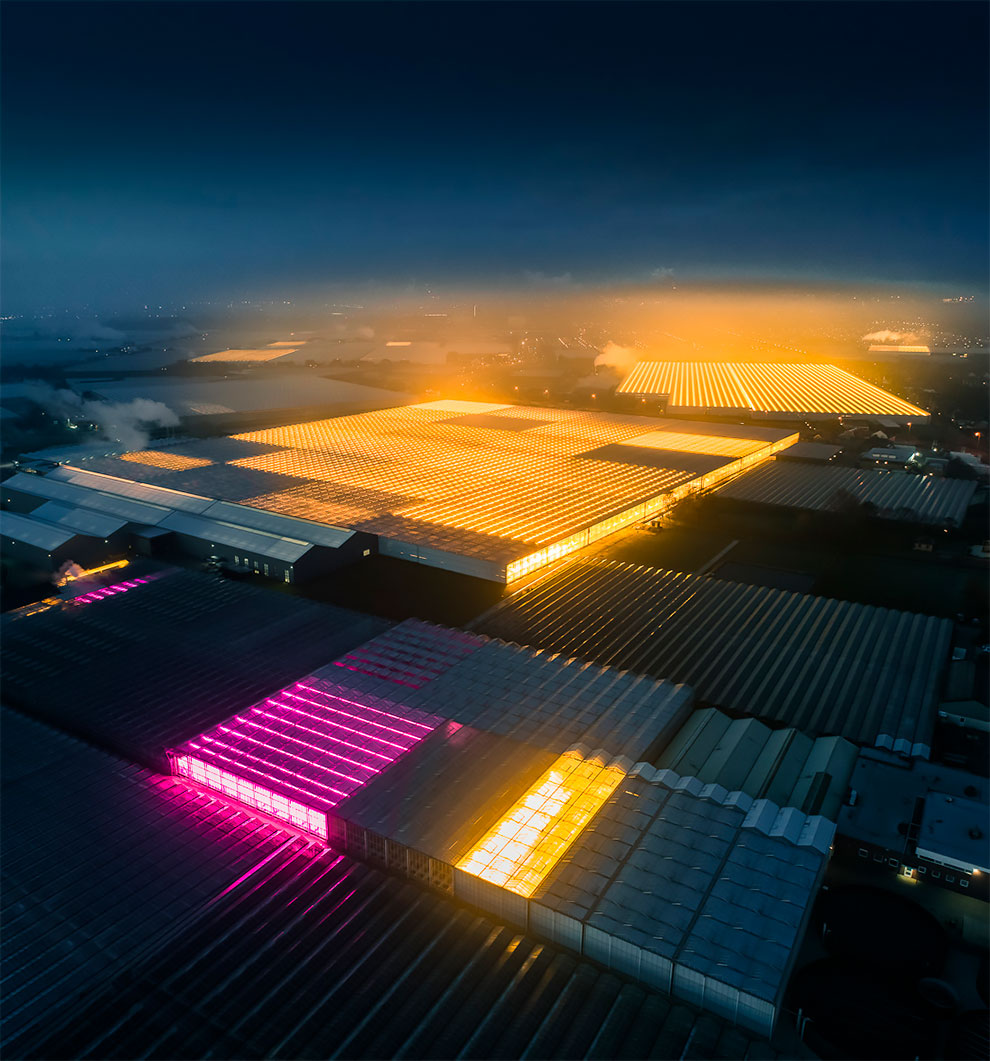 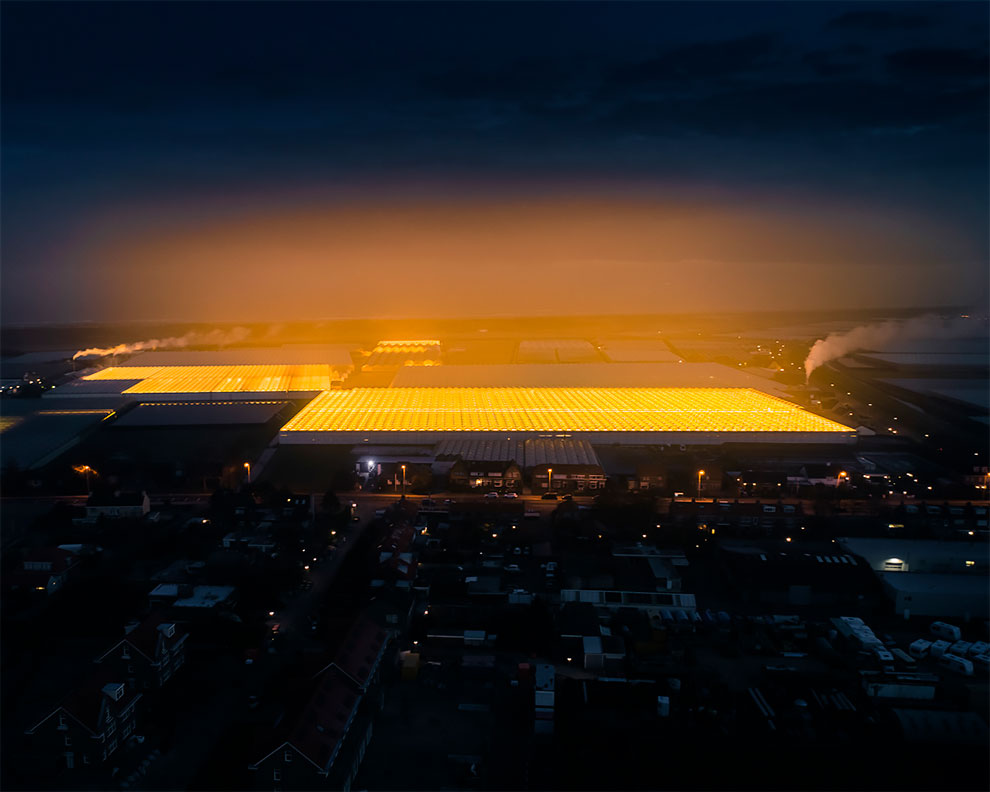 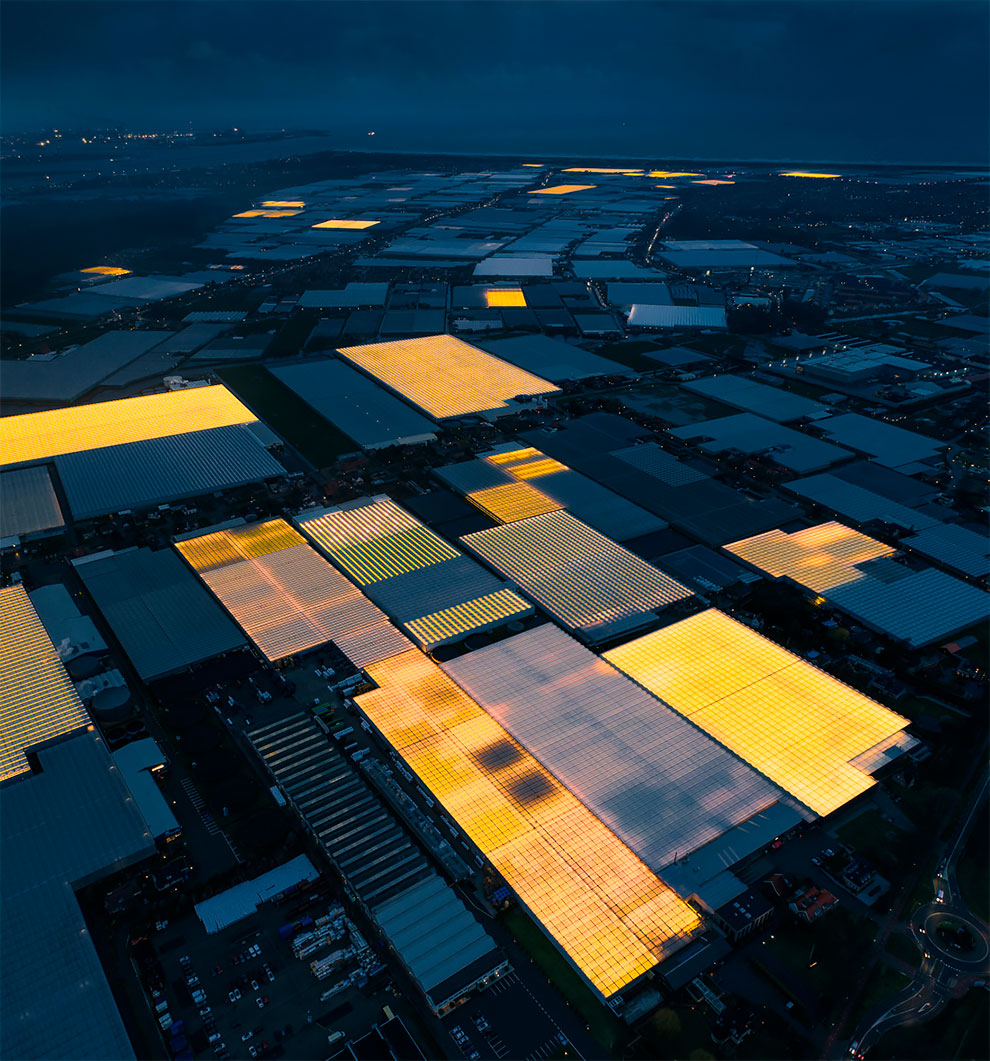 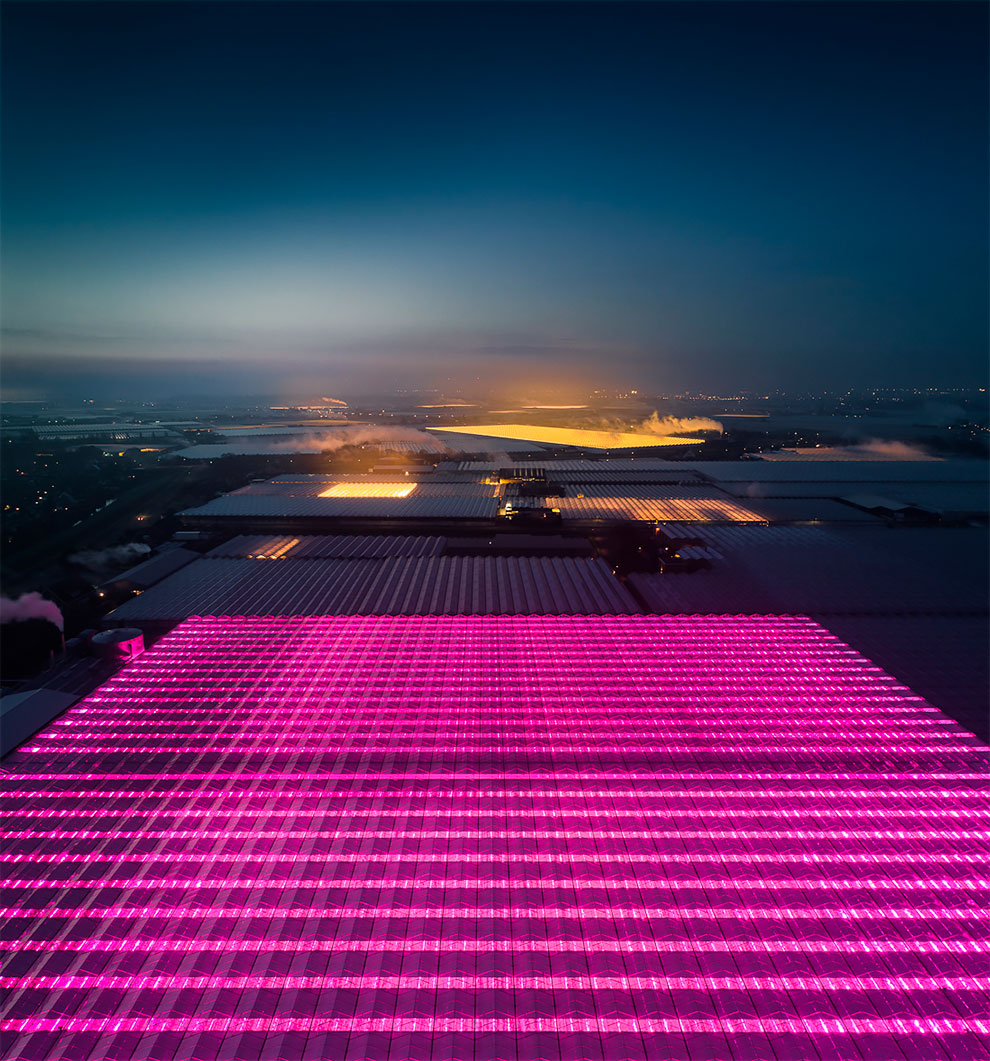 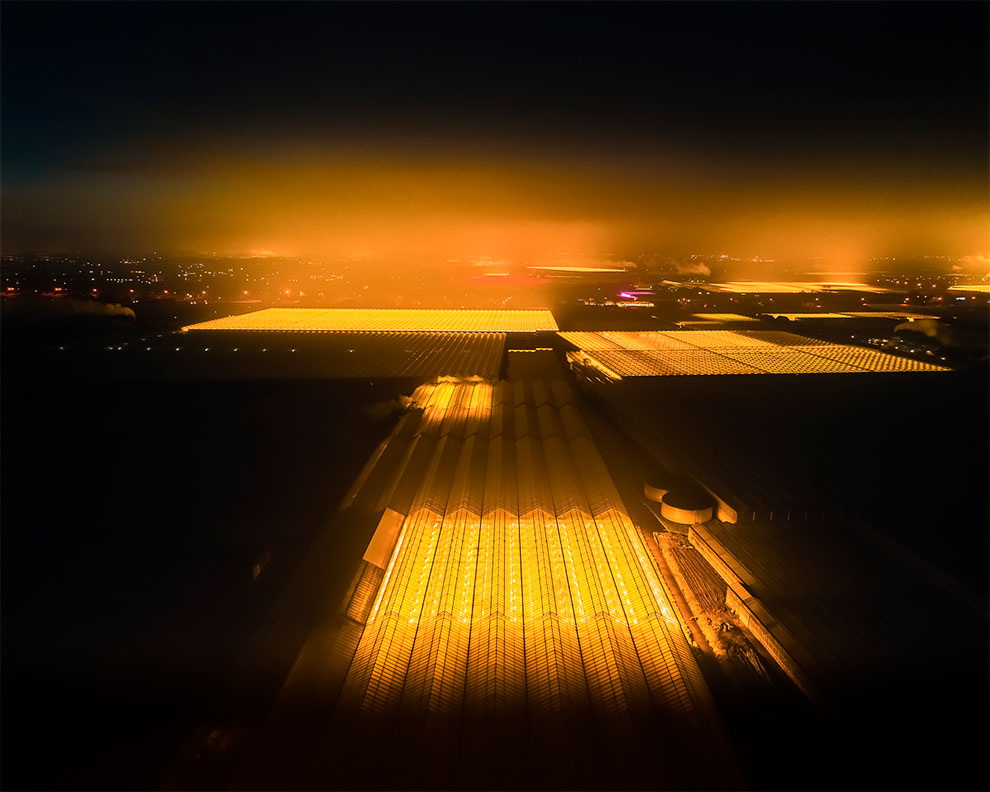 Best Photos From 2021 International Wedding Photographer Of The Year Contest
"One Day with Salvador Dalí": A Surreal Photo Shoot of Salvador Dalì in His Seaside Villa, 1955
Art Aquarium Exhibition in Tokyo
From Dusk To Dawn: Photographer Creates Amazing Cityscapes Showing The Transition From Night To Day
Daredevil Photographer Captures Stunning Cityscape Images in Global Rooftop Craze
Photographer Took Photos Of Pan Bottoms, Which Are Visually Similar To A Planet’s Surface
Vintage Snaps Capture Life at Venice Beach in 1970
Mercedes-Benz Fashion Week Swim 2013: Miami Beach sizzles
"Emotional Struggle": The Melancholic Creepy Self-Portraits of Miroslava Vikhrenko
Photographer Jeremy O'Sullivan
Russian Photographer Makes Astonishing Photographs That Reveal The Beauty Of Russian Cities
"Spuds You Like": Spectacular Winning Photos From The Potato Photographer Of The Year 2020
Hungarian Photographer Took Pictures Of Rome And Converted Them Into Surreal Infrared Landscapes
How to Make a Doner Kebab
Winners of the National Geographic Photo Contest 2014
Pregnancy In Tents Photo Essay
Shocking Photographs Of People Lying In 7 Days Worth Of Their Trash
"The Secret Life Of Virgins": Flight Attendant’s Photos Show Life In A Virgin America Crew
Magical Cityscapes And Travel Landscapes By Dotz Soh
Portraits and Dreams: Snapshots of Appalachian Children in Kentucky c. 1975
A Midnight Walk Through The Neon-Hued Streets Of Asian Cities By Marcus Wendt
Bloody Brutal Vintage Crime Scene Photos From The Los Angeles Police Department Archives
The Finalists of The 2020 Comedy Pet Photography Awards Have Been Announced, and They're Pretty Damn Funny!
Images Of Europe's Most Spooky Abandoned Hospitals Show Just How Frightening These Once Sparkling Medical Facilities Can Be
Greenhouses, LED, netherlands, night