Sculptures All Over The World Are Currently Being Discovered With Medical Masks Affixed To Their Mouths – Please, Stop Doing This!!

The Fearless Girl statue stands across from the New York Stock Exchange. 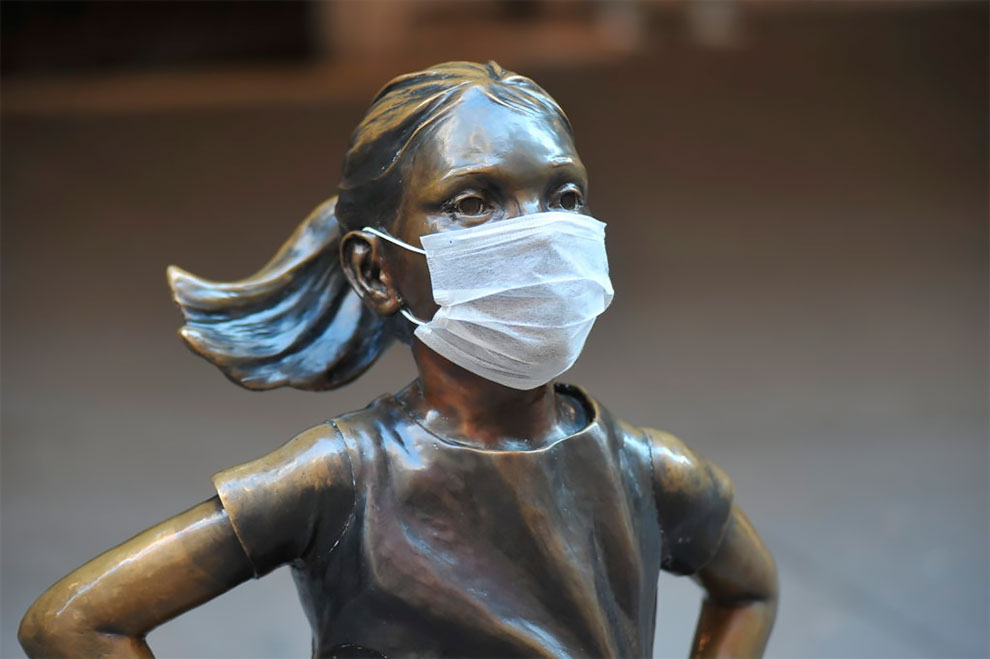 Listen: there’s almost always a time and place for slapdash conceptual art, especially if it’s the product of mass collaboration. During a time in which coronavirus is ravaging the planet, causing just as much emotional despair as physical devastation, people are certainly entitled to look for creative outlets so that they can stave off stasis and boredom.

However, sculptures all over the world are currently being discovered with medical masks affixed to their mouths, including “Fearless Girl” in New York City, a statue of Confucius in northern Taiwan and the Manneken-Pis statue in Brussels, Belgium. As vital as creativity is, it must be said: when there’s such a clearly practical and urgent need for medical masks all over the world, putting them on statues is baffling and just adds an extra note of confusion where there shouldn’t be one.

Supplies of N95 masks in particular, which are essential for physicians, nurses, and others tending to patients with COVID-19, are dangerously low, and the health officials have been warning private citizens not to stockpile them unnecessarily.

The “Magic Carpet Ride” statue along Highway 101 in Cardiff-by-the-Sea, California. 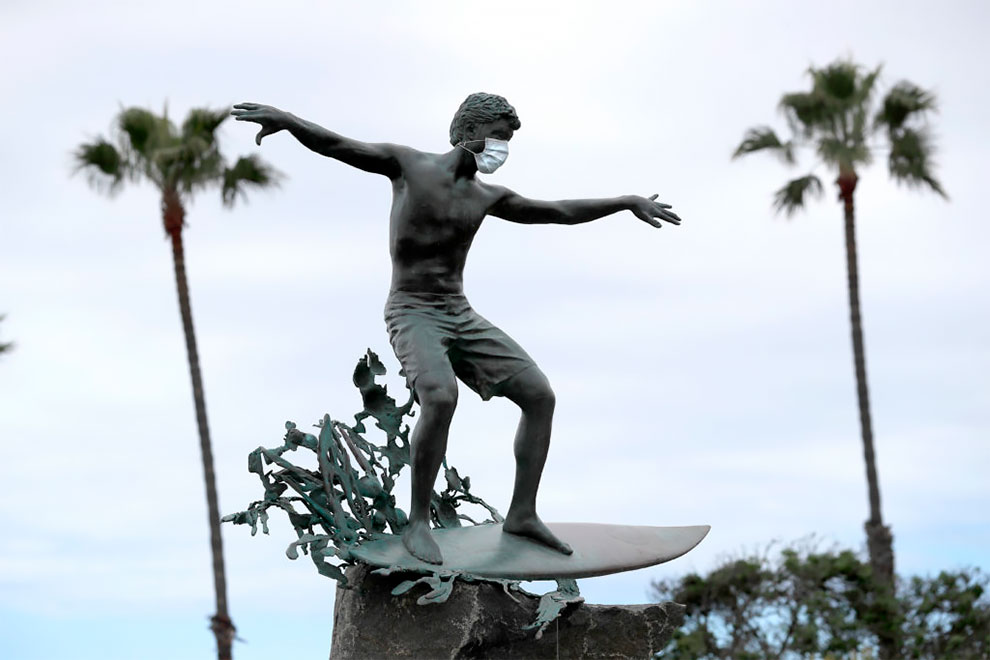 A statue of Confucius by Taiwans sculptor Lin Hsin-lai, in Taoyuan, northern Taiwan 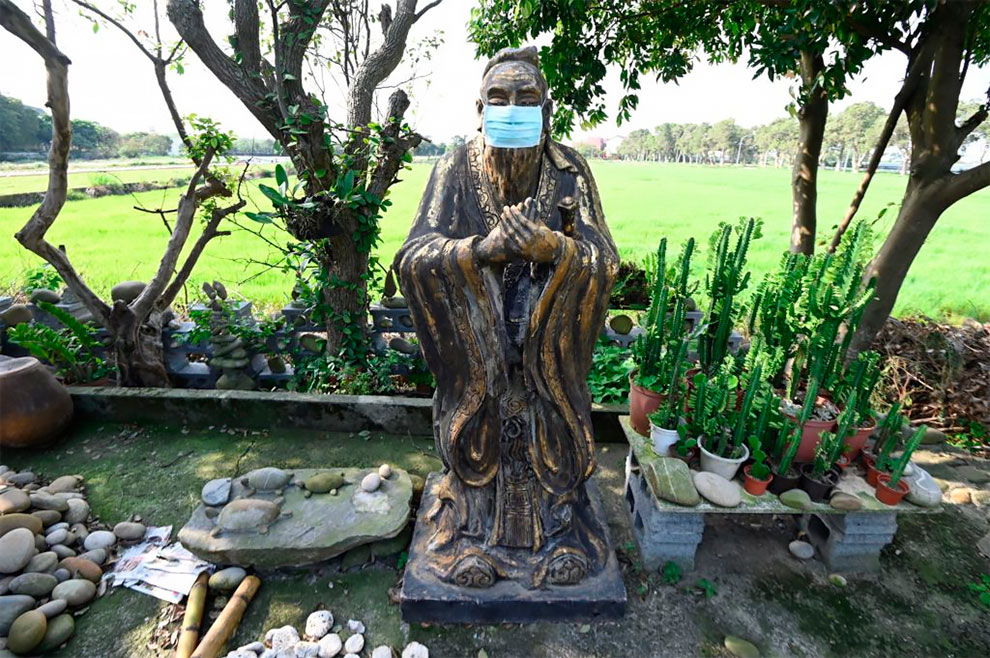 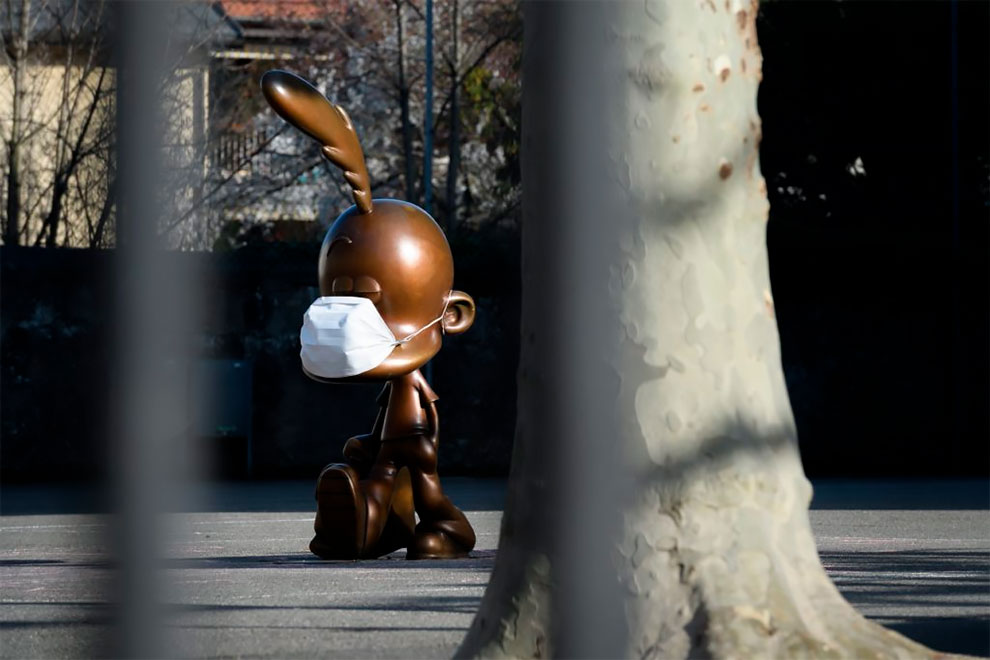 The Manneken-Pis statue that wears a protective mask support of medical workers in Brussels, Belgium. 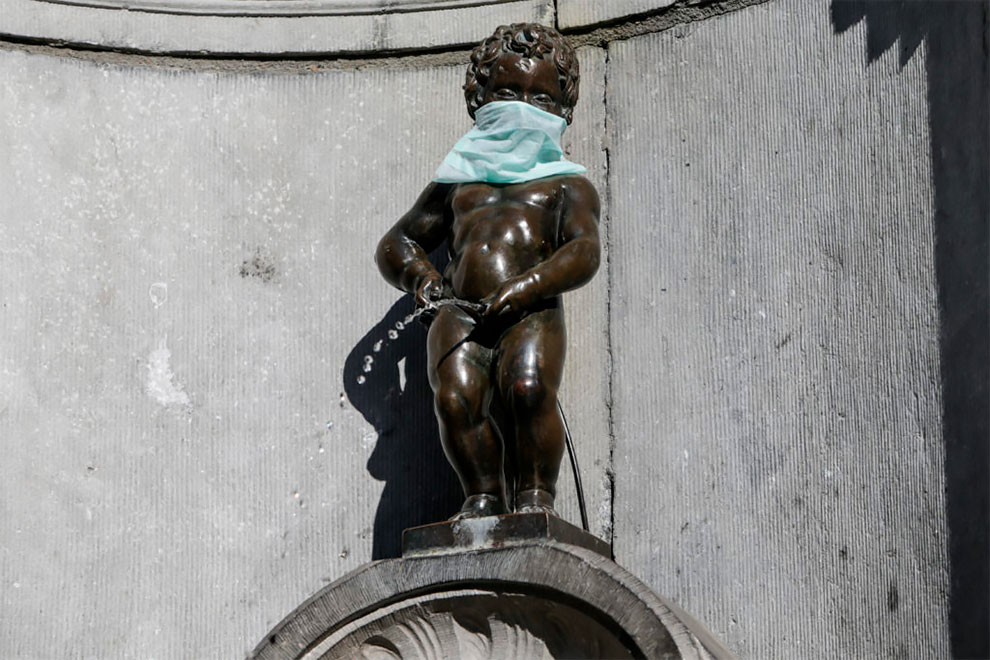 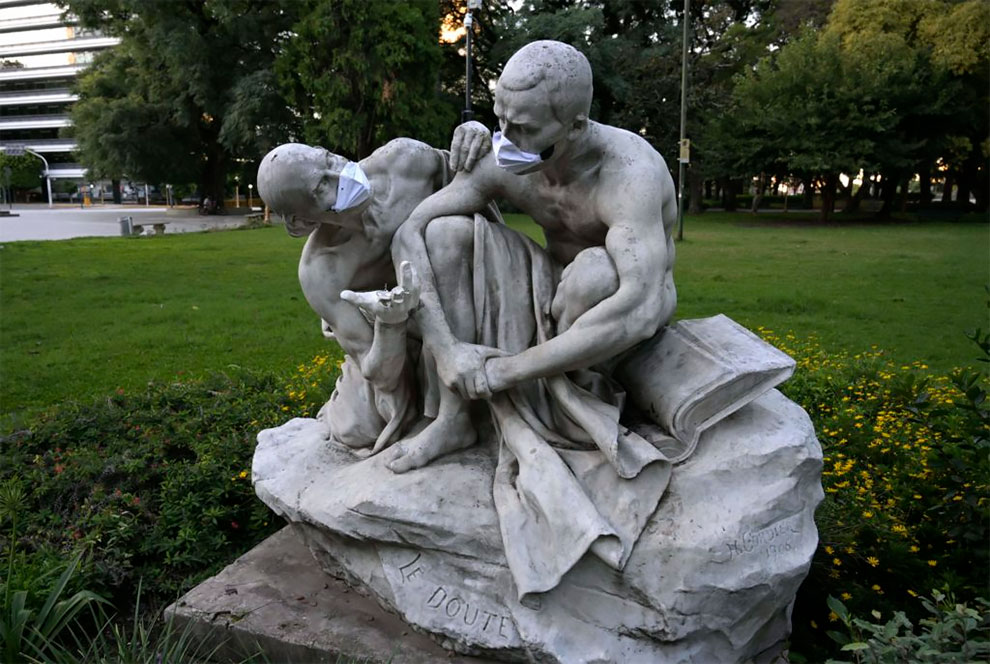 The statue of Queen frontman Freddie Mercury dons a mask on the shore of the Lake Geneva. 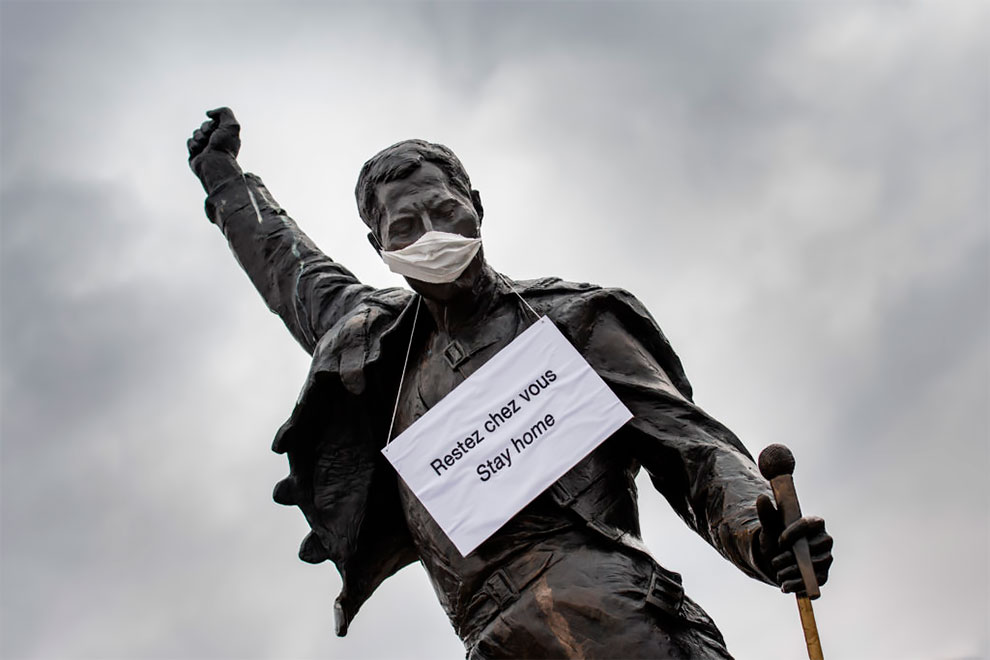 The beloved statue of the dog Greyfriars Bobby that has had a face mask placed on it in Edinburgh. 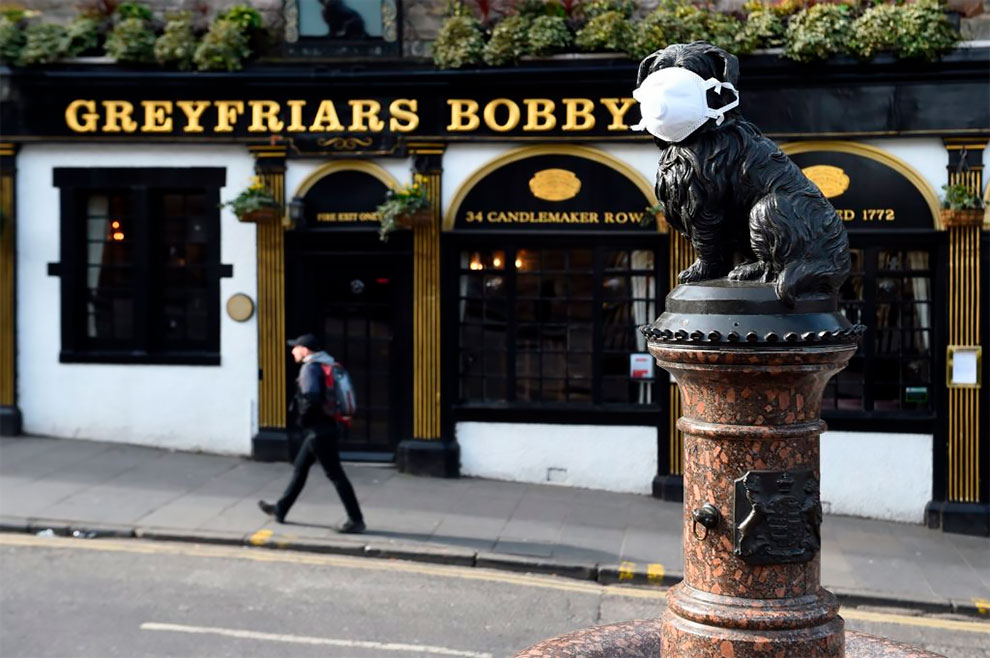 Statue of King Baudouin with a mouth mask in Oostende. 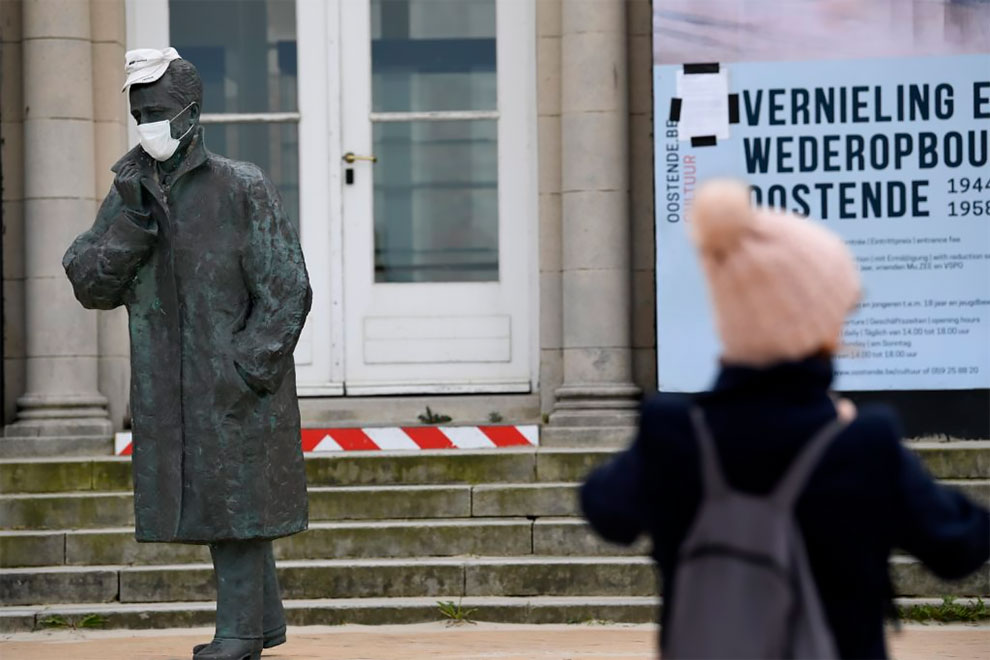 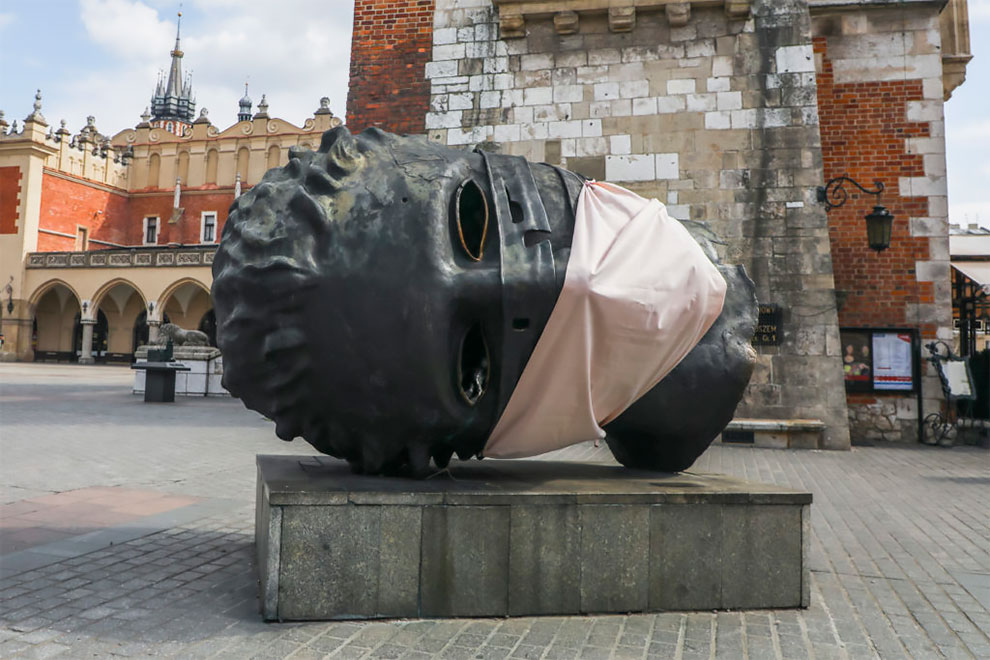 A statue at the Luxembourg Square in Brussels, Belgium. 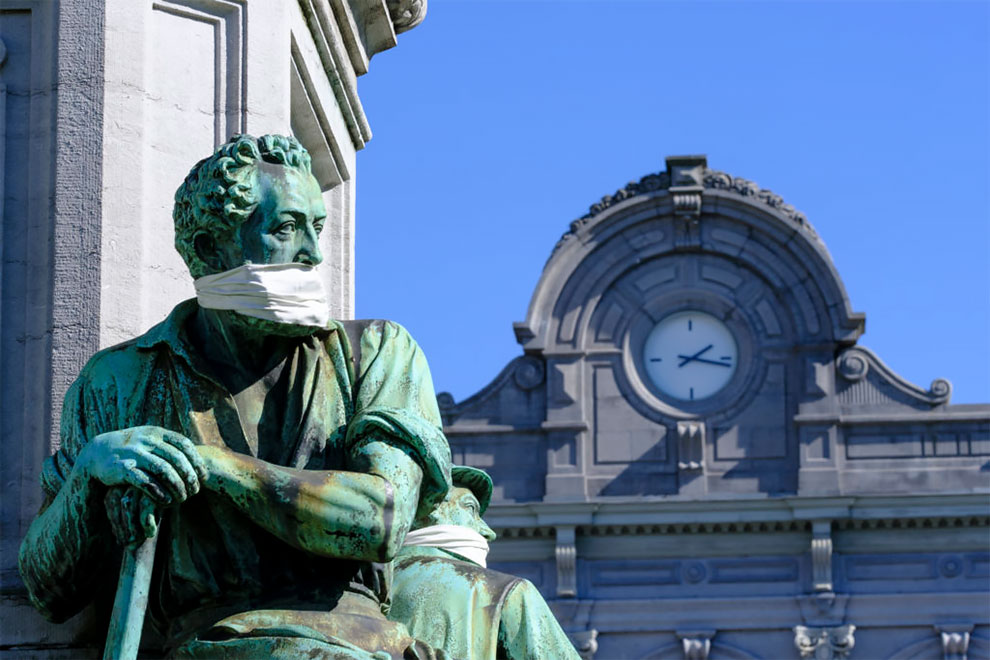 The statues at Princess Margaret Hospital in Toronto. 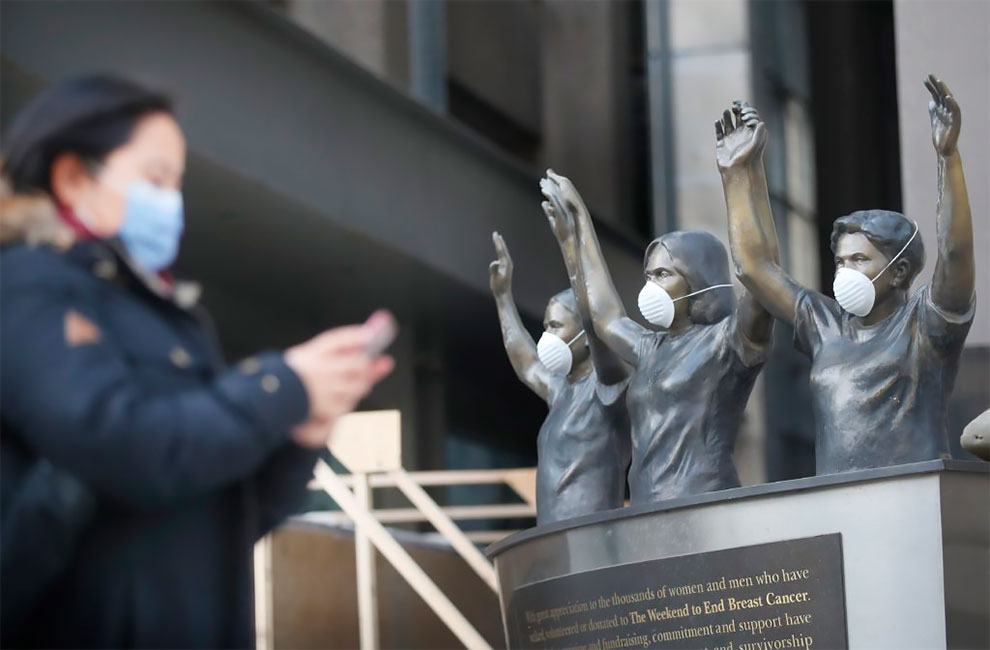 A view of the Make Way for Ducklings statue wearing crafted face in Boston, Massachusetts. 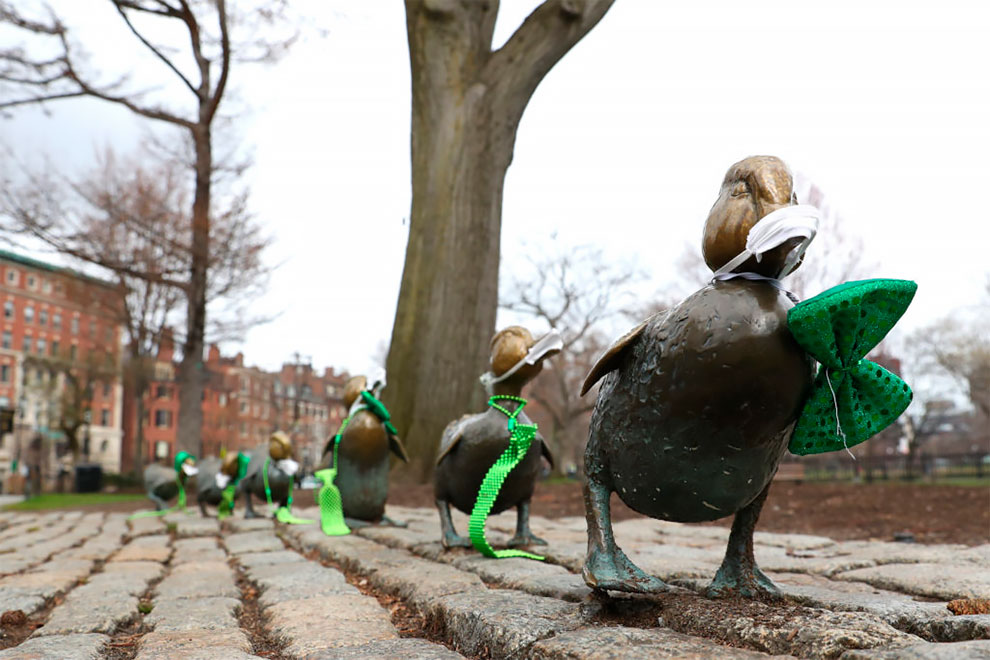 A statue in jardin des tuileries with a face mask on his face in Paris, France. 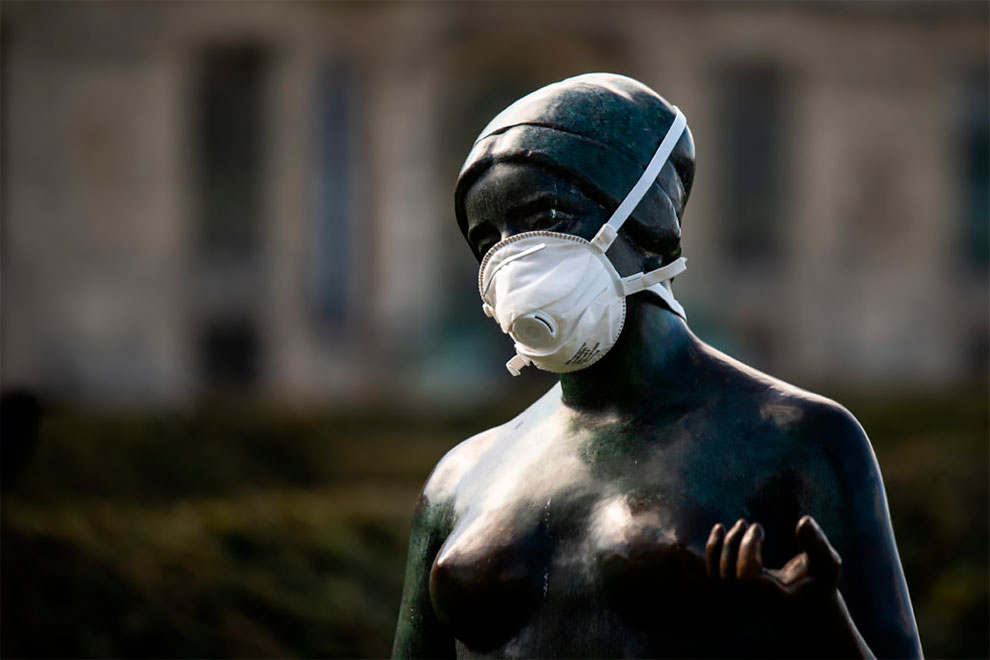 A statue in the city of Sulaimaniyah, in the Kurdish autonomous region of northern Iraq. 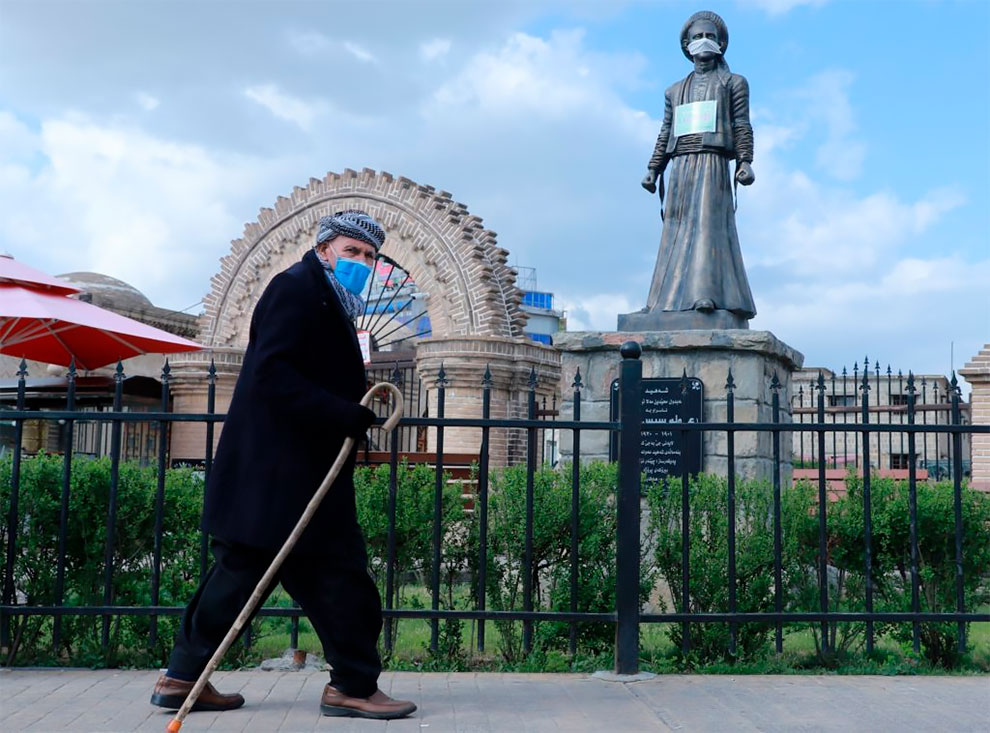 A protective mask and gloves are placed on a statue in Madrid Center. 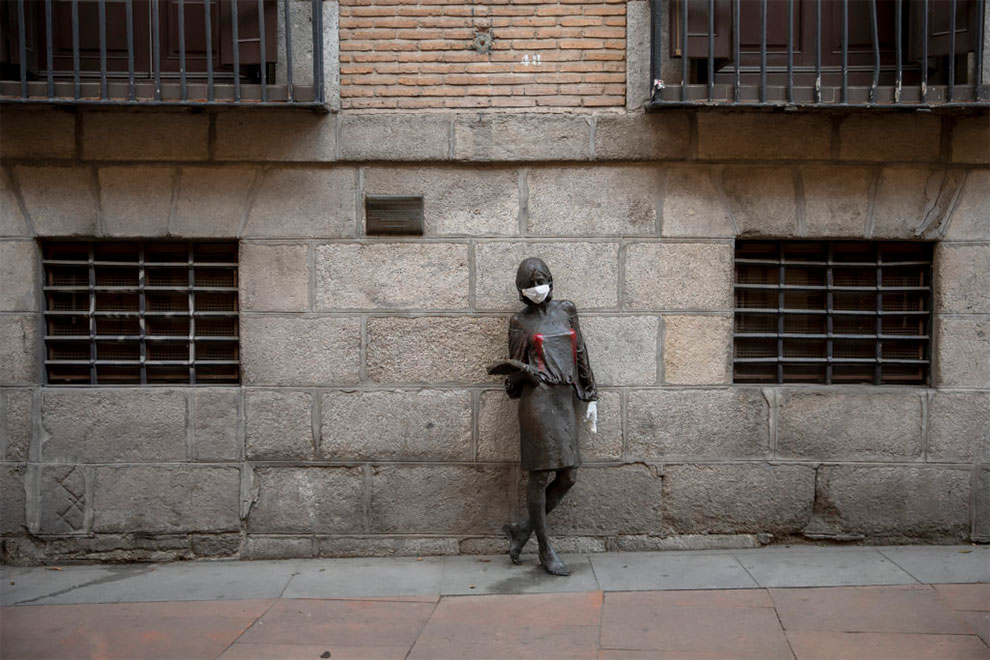 Face mask and medical gloves were put on the statue of Alex de Souza in Istanbul. 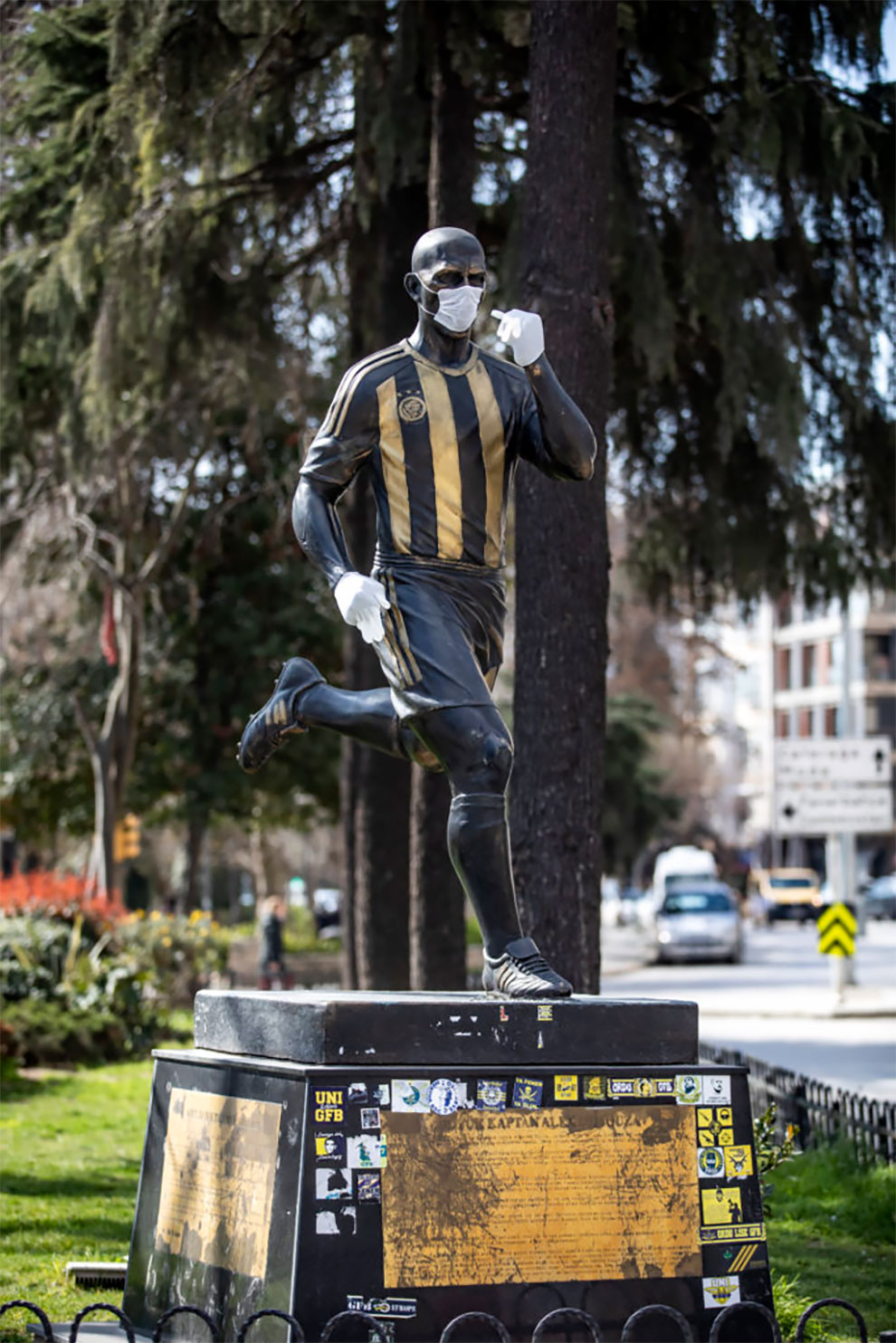 A view of the Emmeline Pankhurst at St Peters Square in Manchester. 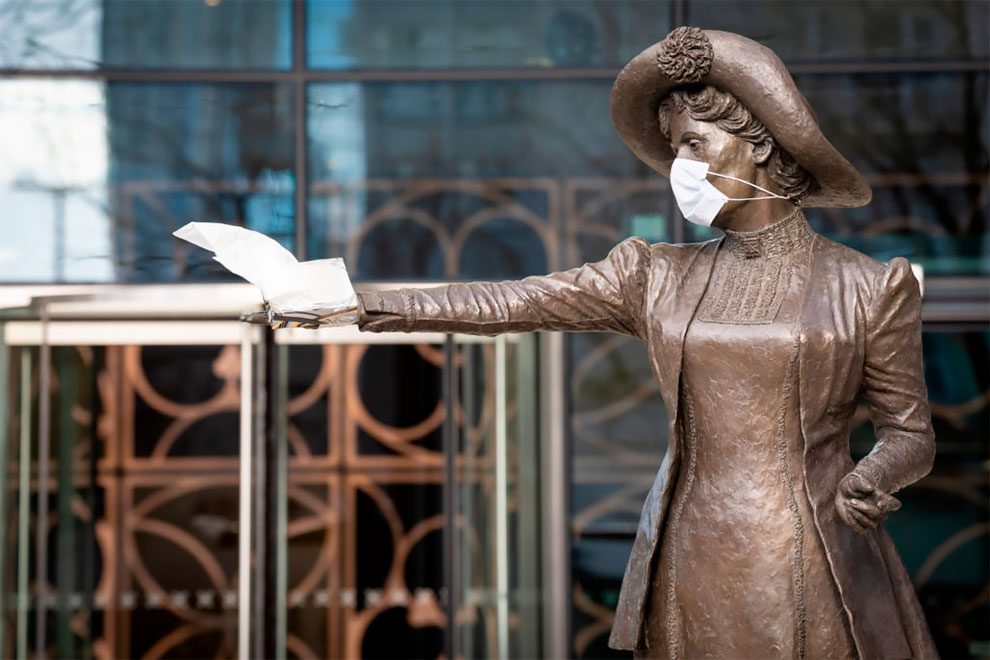 A sign sitting at the base of the Rocky Balboa Sculpture outside the Philadelphia Art Museum. 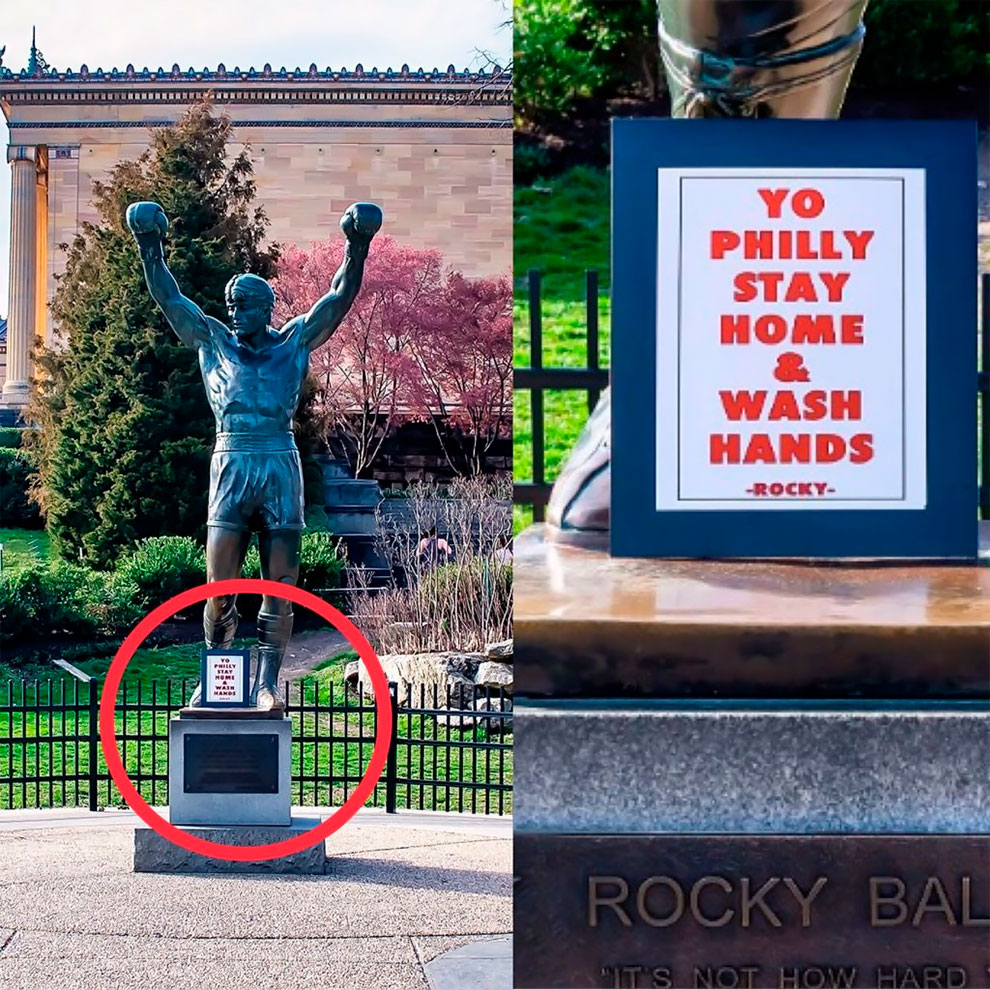 Artist Humorously Illustrates the Events of His Flight That Every Traveler Can Relate To
This Instagram Account Collects The Saddest-Sounding Places On Earth
Tons Of Juice Flooded The Streets Of Russian Cities
First Sahara Desert Snow Miracle In 40 Years Captured In Stunning Photographs
You Can Stay At This Converted Oil Rig In Malaysia And Go Diving
A Look Inside One Of The World’s Most Isolated Tribes With Incredible Photos You Probably Haven't Seen Before
A Prison Themed Restaurant in China
Couch Surfing USA: Three People, Two Dogs and One Futon
Artist Reimagined Famous Paintings To See What They’d Look Like If They Were Painted During The Coronavirus Crisis
This Craftsman Creates Absolutely Badass Steampunk Masks, Outfits And Accessories
The Saints Wear White: Artist Pays Homage To Chinese Medical Workers With Chapel Mural In Hubei Province
Refuge Galindia: The Polish Slavic Pagan Resort That You Have To Visit
The Oddest Subway Station In China
Beyound The Postmodern Kitch: World’s First Gold-Plated Hotel Opened In Vietnam
Woman Parodies Perfect Instagram Travel Photos With Hilariously Unphotogenic Selfies
This Thai Resort Is Surrounded By Trees And Was Inspired By Four Fictitous Clans
Dive In And Join The Chaos – If You Can Find Any Water Left In These Crowded Swimming Pools
Welcome to the Saddest 1980s Mall in America
Here Is The Most Terrifying Place On Earth
Let's Discover Sweden's Icehotel Incredible Bedrooms Made Of Ice And Snow
Zombie Boy Launches "Platform 15" At Thorpe Park’s New Halloween Attraction In London
No Man's Land: Fukushima Exclusion Zone Through The Eyes Of Daredevil Stalker
A Daredevil Aerial Walkway Over A Tea Park In China
Bore Tide Surfing in Alaska
coronavirus, masks, statues