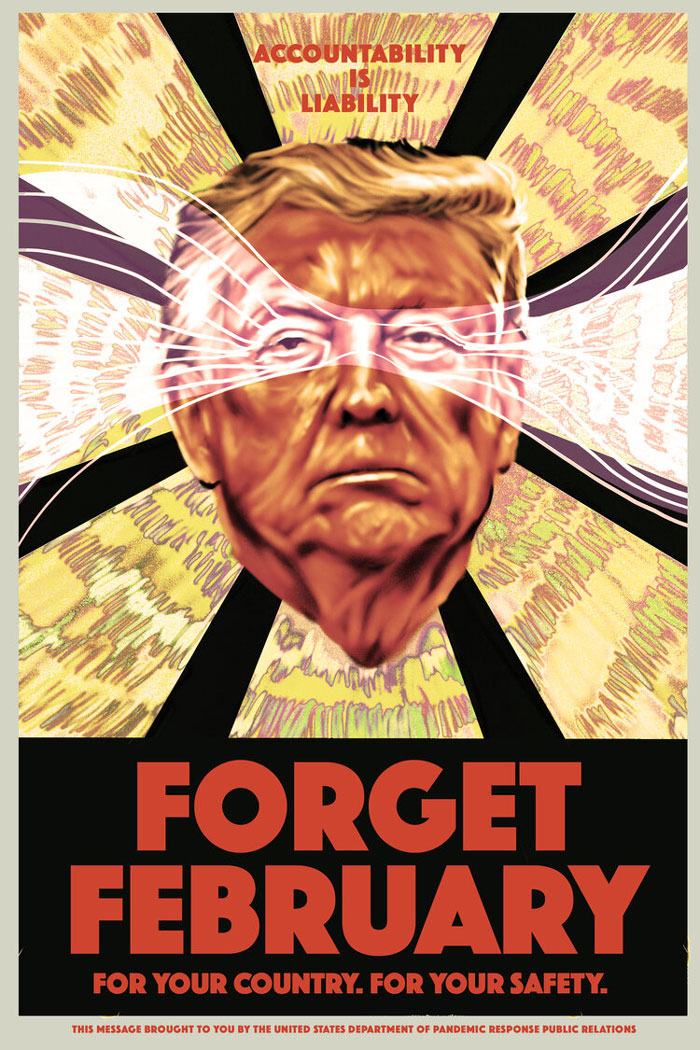 There used to be a time when posters had great influence on the shaping of people’s behavior and opinions. I am, of course, referring to the old-school propaganda posters from the 20th century. The medium was quite popular from around the time of the two World Wars all the way up to the late 1980s.

Now, if you’re a fan of such historical art, you’re in luck as graphic artist and illustrator Fernando Reza from Los Angeles, California has recently come out with six propaganda posters inspired by the COVID-19 pandemic (and all that it has caused in the US) wrapped up in the old-school aesthetic. 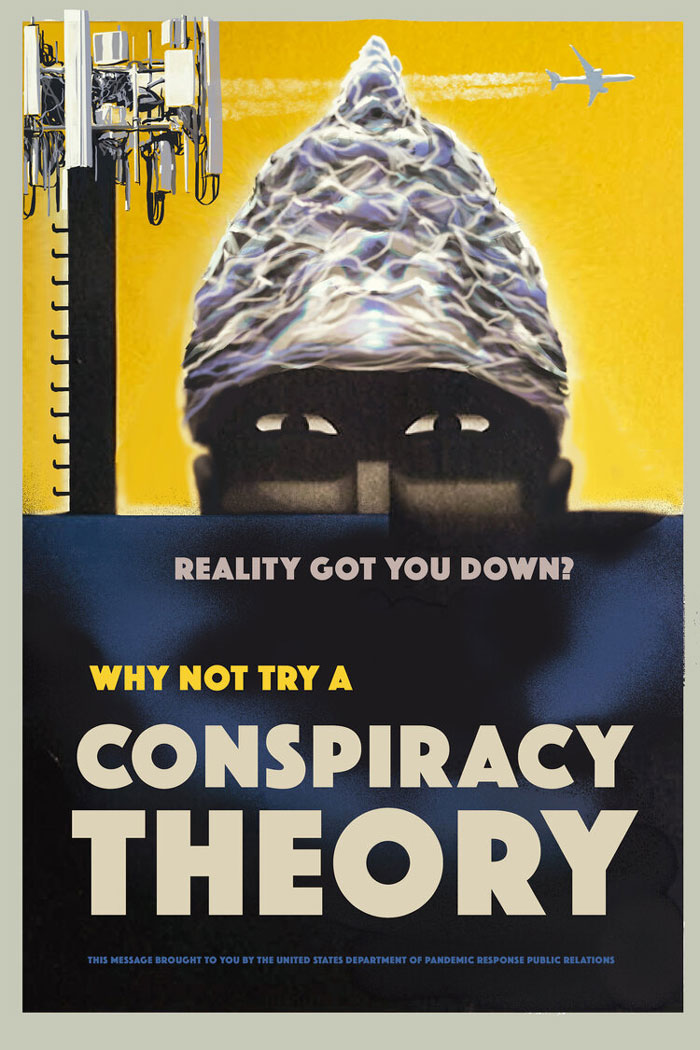 “Like everybody else, I’ve been waking up to the cycle of bad news, and the weird and oftentimes confounding messaging coming from the president. […] And that anxiety is hard to express these days, especially online, without inviting even more anxiety, inducing political discussion with people defending the administration, often in bad-faith ways,” Reza explained the inspiration behind the posters.

“I wanted to cut through everything and just present the subtext and often direct quotes in clear imagery to get across how weird and grotesque the [government’s] messaging has gotten at a time when people are looking for and need real leadership.” 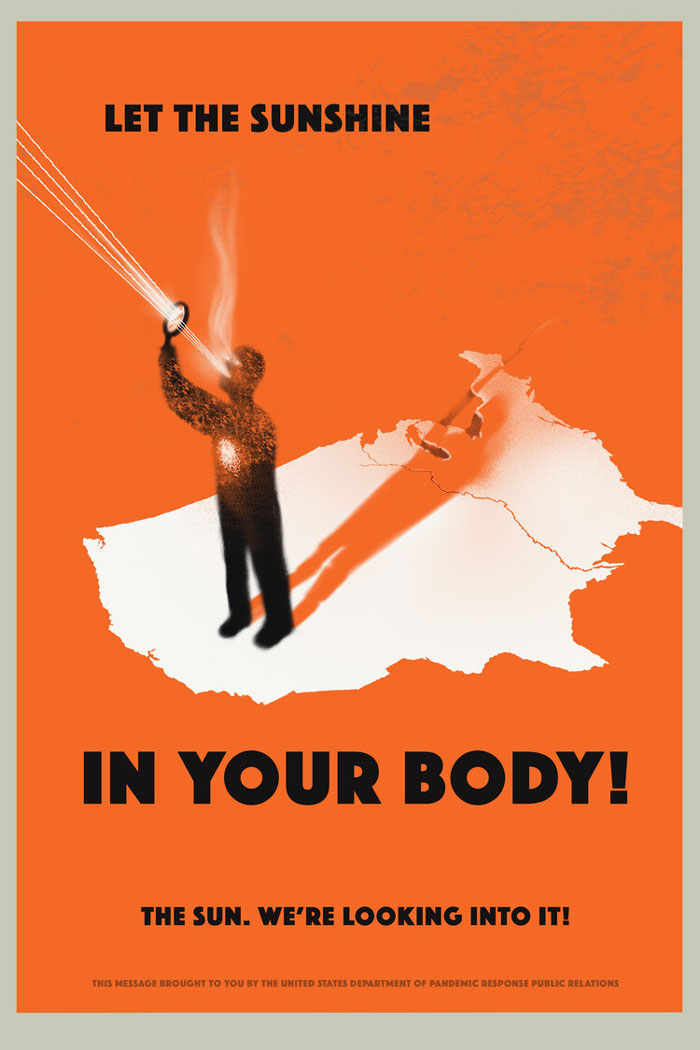 Specifically, the posters take a jab at the solutions to the issues caused by the pandemic, like the relentless attempts to reopen the economy at the expense of people’s lives and the 5G conspiracy, featuring flowery catchphrases like Die for the Dow: A Good Economy Requires Your Sacrifice and Reality Got You Down? Why Not Try A Conspiracy Theory?

A couple of posters also feature President Donald Trump’s image with references to his recent ideas on how to cure the coronavirus, namely the injection of disinfectant and internal organ exposure to UV rays.

“This is what we’re talking about: sacrificing people for the economy, crackpot medical theories casually thrown out there to wreak havoc on scared people looking for answers, weirdly gushing about the beauty of our test kits, avoiding accountability for not doing the things we should’ve done to minimize the severity of the outbreak early on, etc. I wanted to present that messaging clearly without the polite veneer,” elaborated Reza. 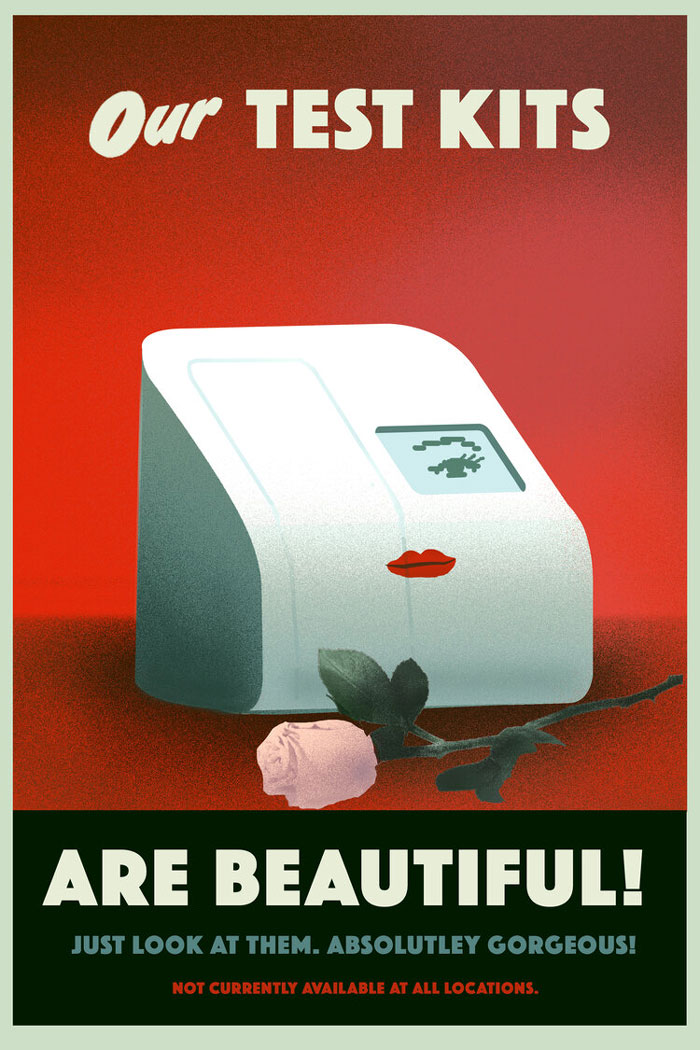 And what better way to express the ridiculous state of affairs if not by the use of propaganda posters? Originally, propaganda posters were used as a mode of communication to influence people’s attitudes toward certain causes or positions, whether good or bad. However, many of them were of a manipulative nature, pushing and favoring a specific political agenda.

Reza elaborated on this: “Propaganda posters are, by their nature, very direct and express an idea clearly and enthusiastically. A lot of people would say the daily press briefings have become a form of modern propaganda, but today we have pundits on TV processing and softening the message with people discussing it on a split screen, or comment sections online full of bad-faith arguments and ad hominem attacks.” 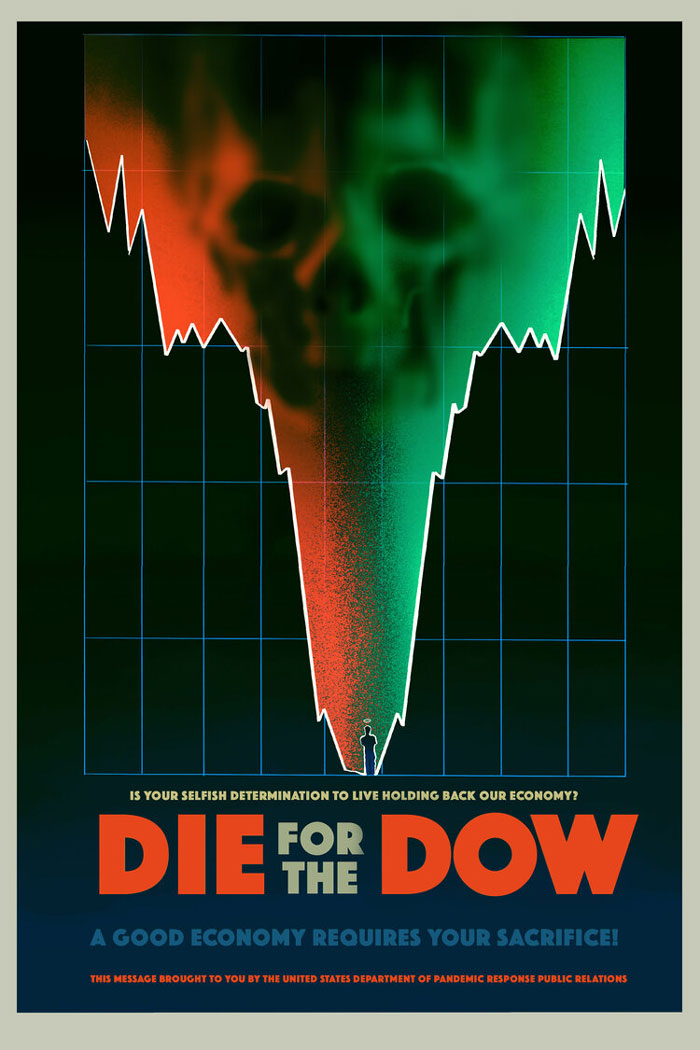 Now, there is much more ridiculousness happening in the public these days, but there are only 6 posters out there, begging the question: did Reza have more ideas that didn’t make the final cut?

“Definitely. Once I started making them, it felt pretty cathartic and there was no shortage of things to highlight. The weird focus on TV ratings, the mixed messaging on whether stay-at-home orders are to be followed or ignored, the implied threat that the administration will hold back relief from certain governors and states for various reasons, etc. I narrowed it down to these six, but there’s definitely a chance to do others.” 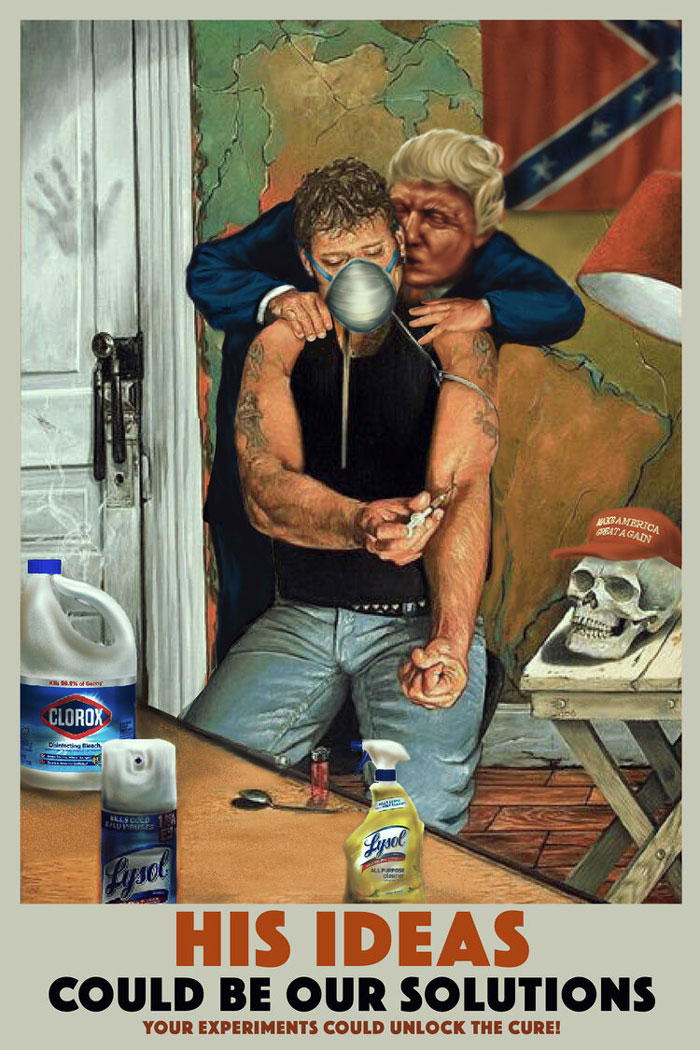 Reza is responsible for a number of other works, namely a number of movie-related posters, propaganda-style posters on retro games, and travel posters for a number of countries. Moreover, he’s been featured on the Huffington Post’s Arts page, Nascar Illustrated, Men’s Health’s Holiday Gift Guide, and a number of other publications. Besides this, he’s also a regular artist at Gallery 1988 Spoke Art and Hero Complex Gallery, with experience in work for film and television.

We’ve asked Reza how he decides what things, themes, and topics to cover with his designs, to which he replied: “Usually, my stuff is a lot more lighthearted and focused on things I’m into or find interesting. Oftentimes, the ideas develop organically. With this, I had originally wanted to do something on a more positive note, highlighting the people on the front line, or something more encouraging. And I still hope to do that. But every idea would kind of go down this more pessimistic, sardonic road and I thought this must be how a lot of people feel right now so I went with it.”

Reza is responsible for other old-school-inspired posters, including the following for modern movies: 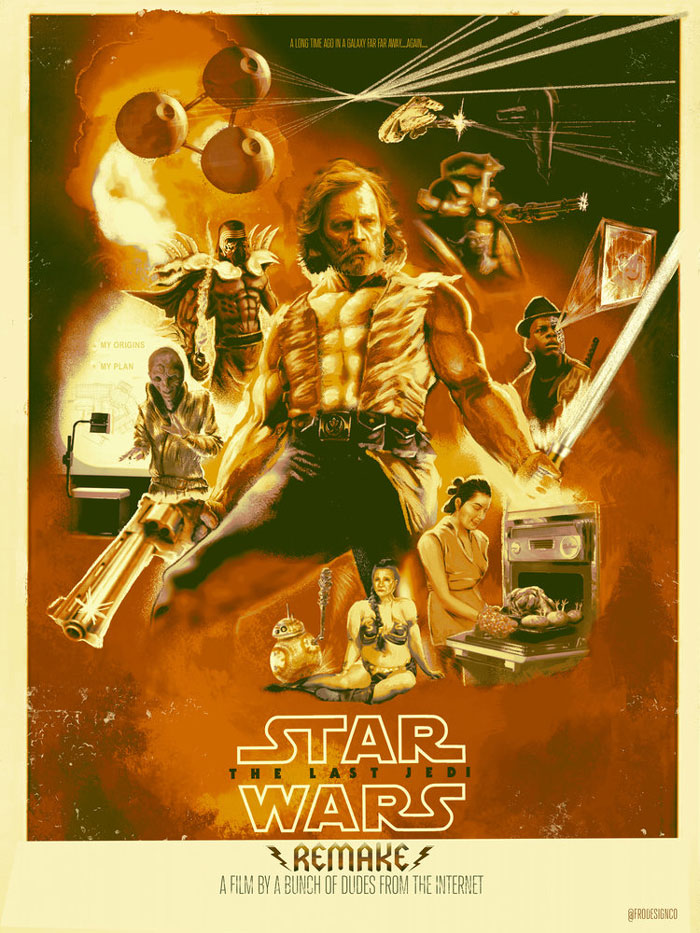 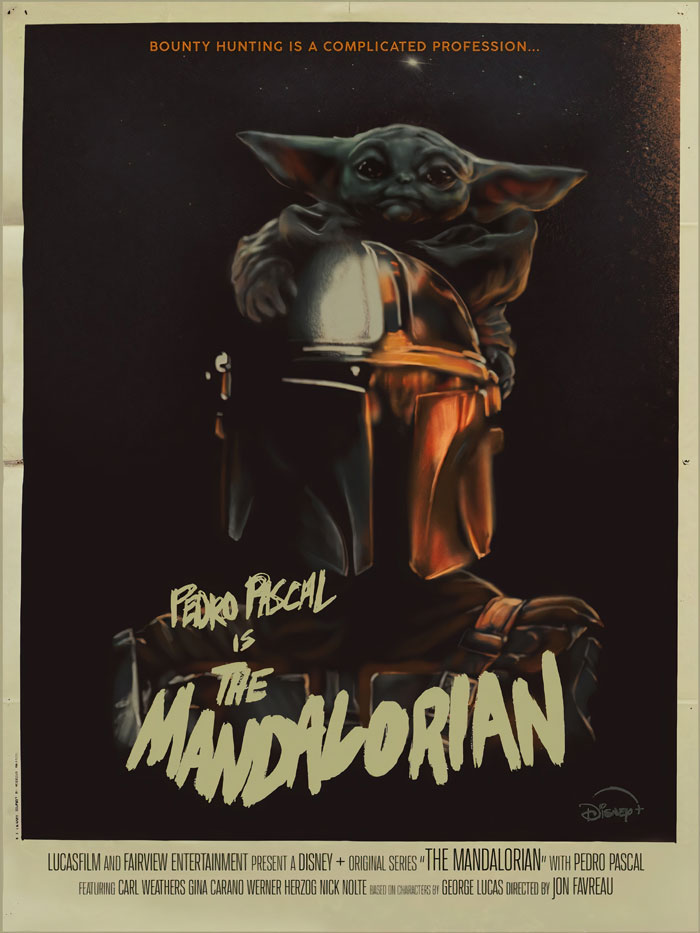 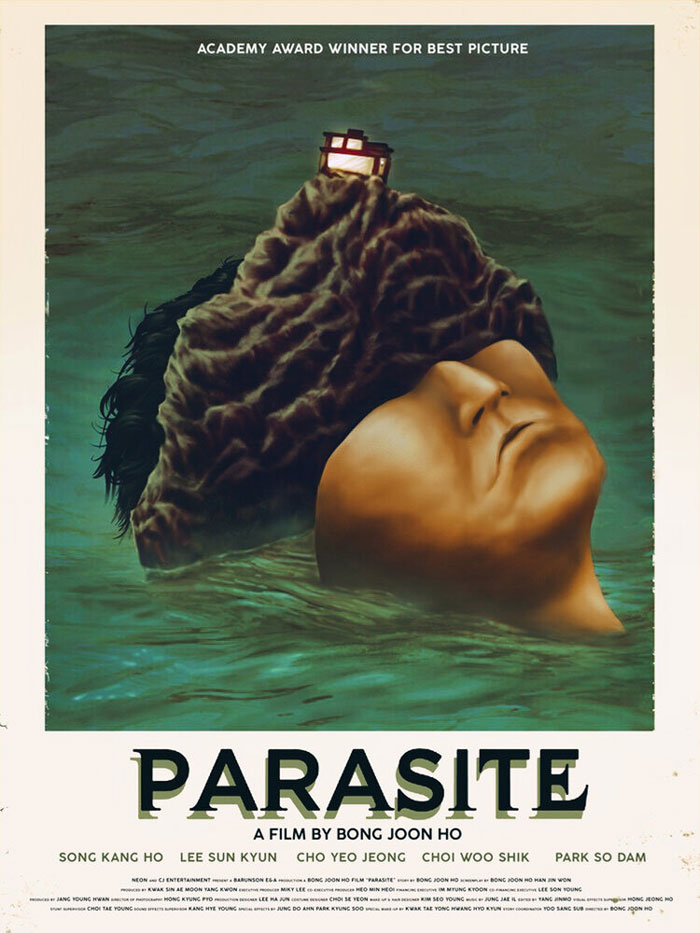 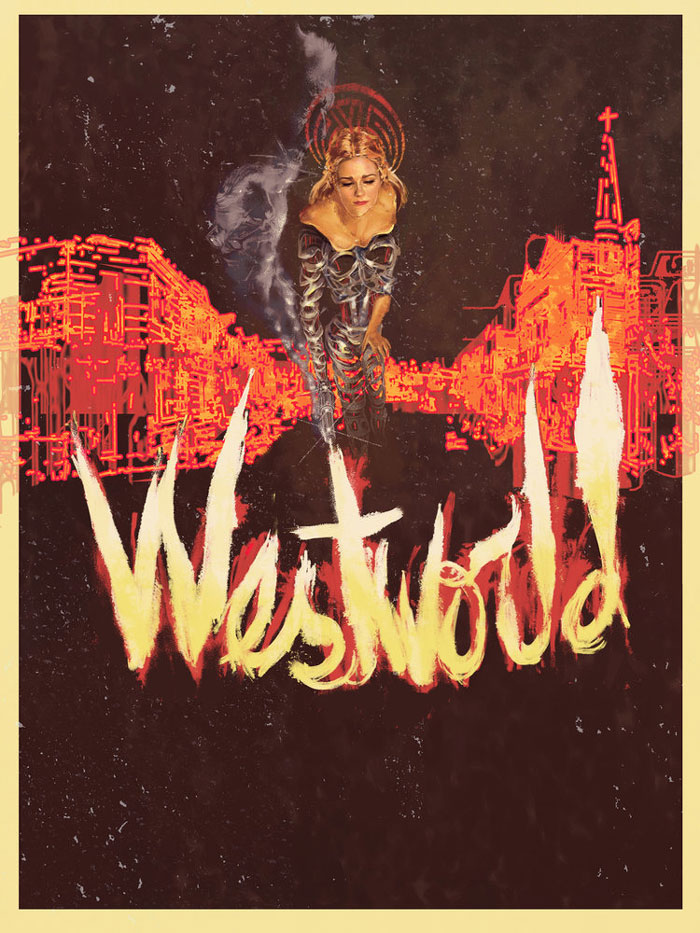 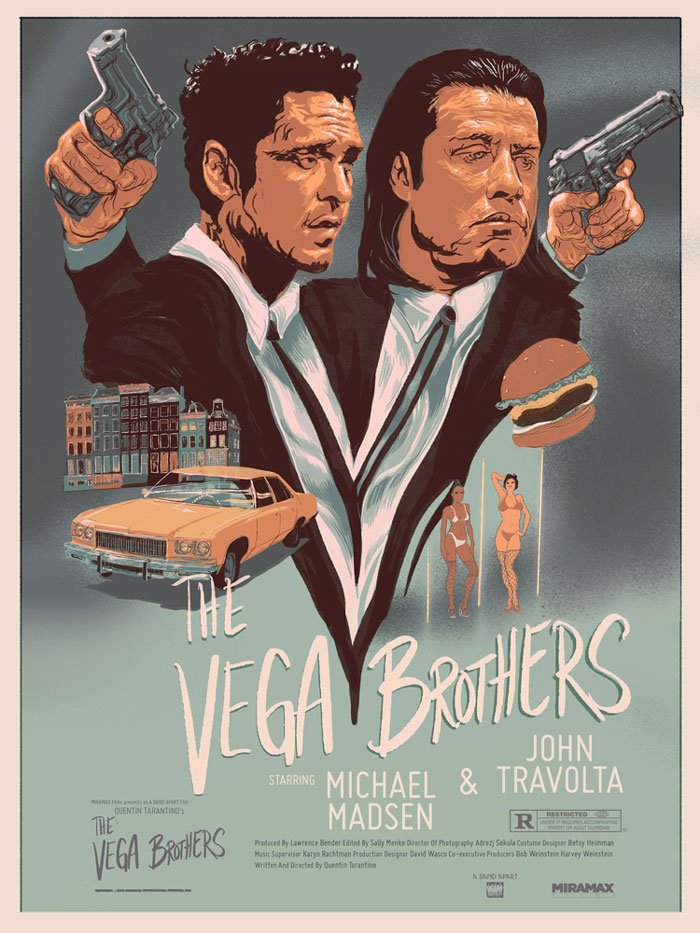 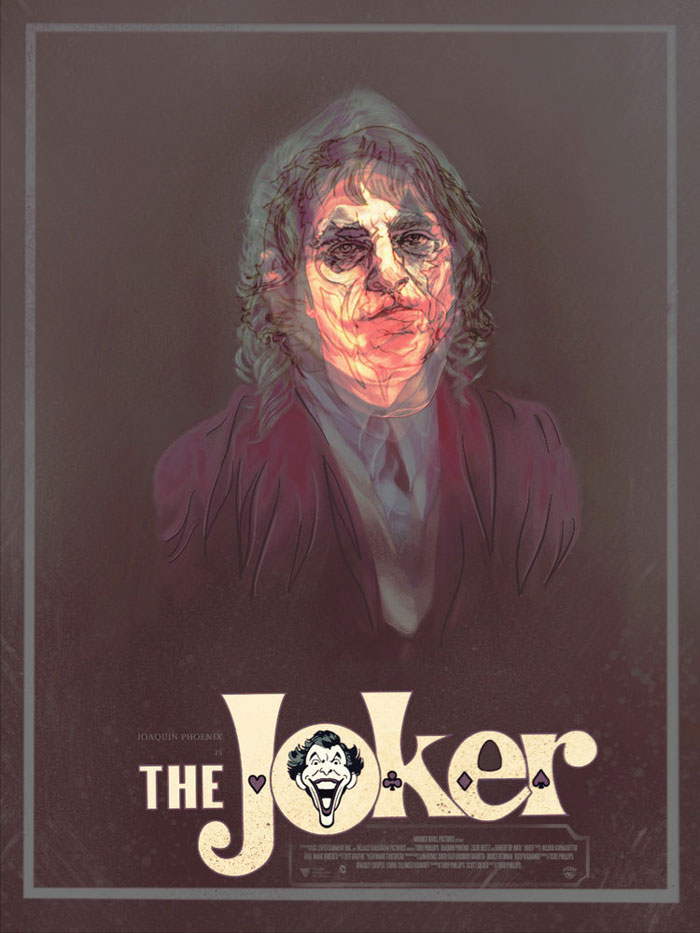 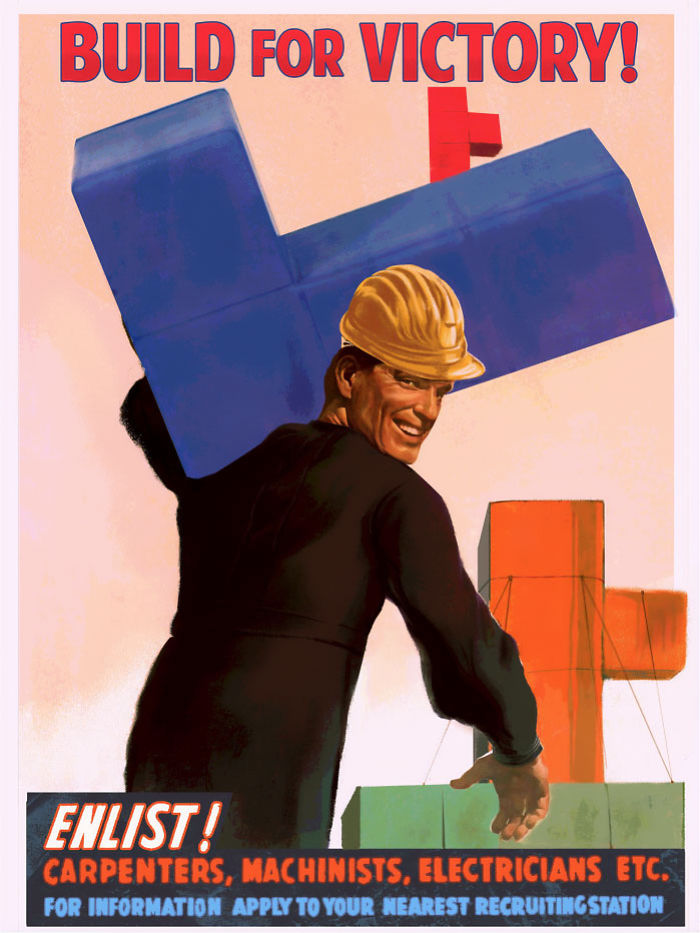 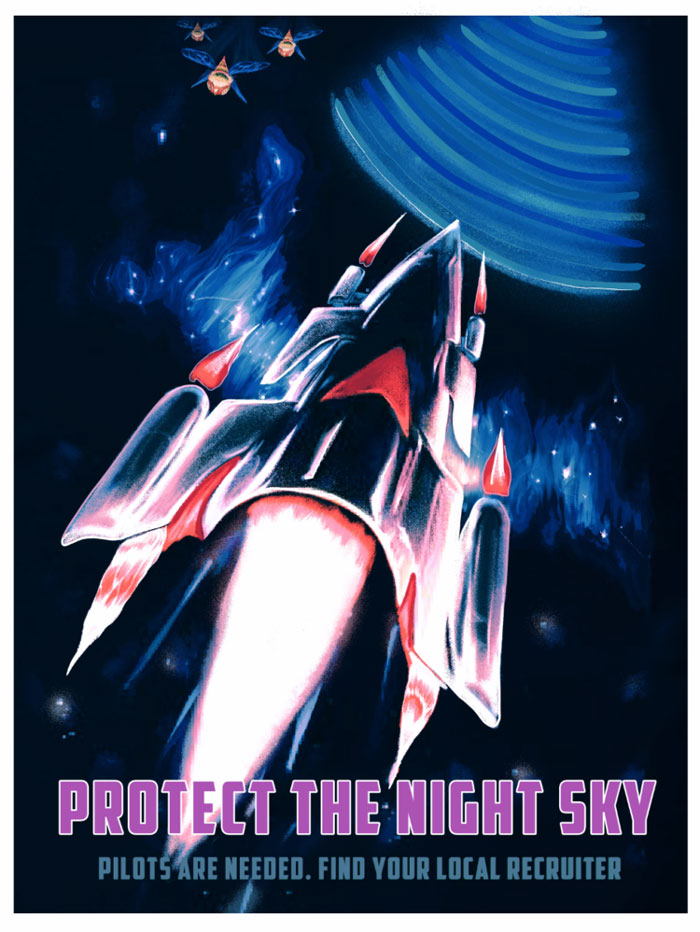 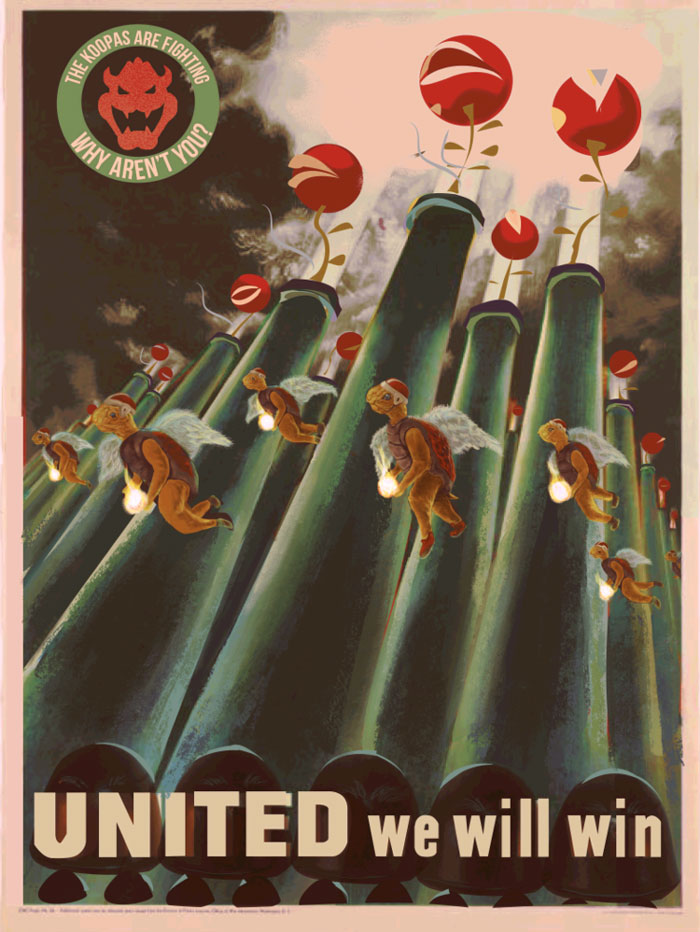 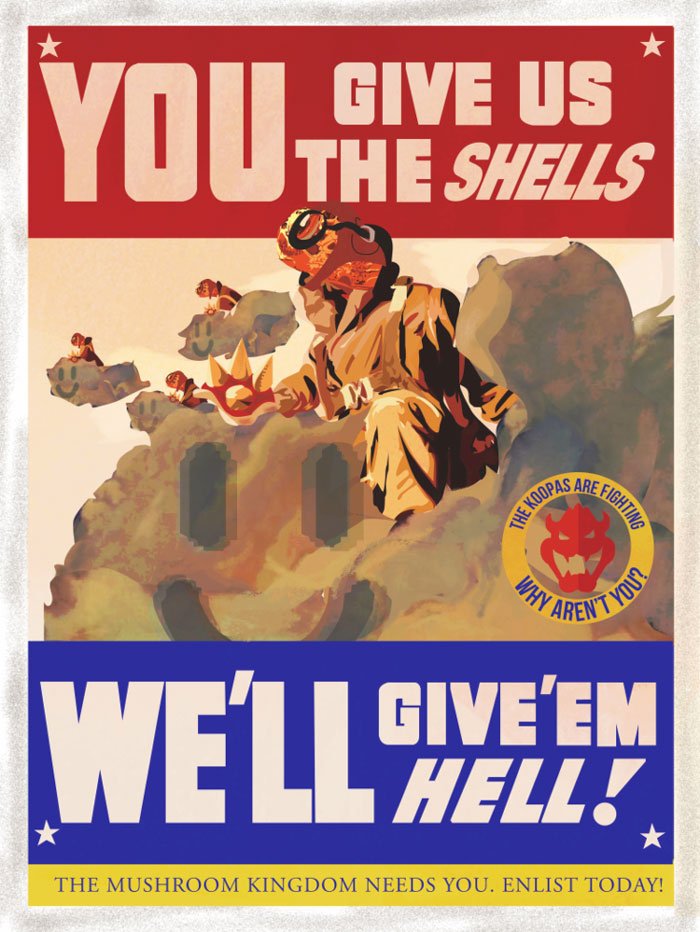 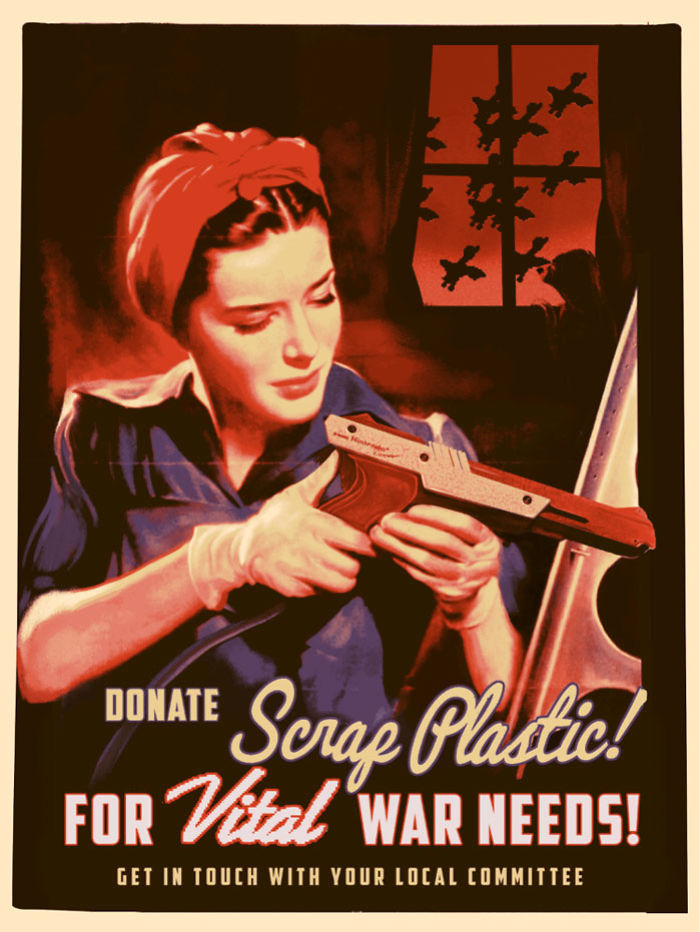 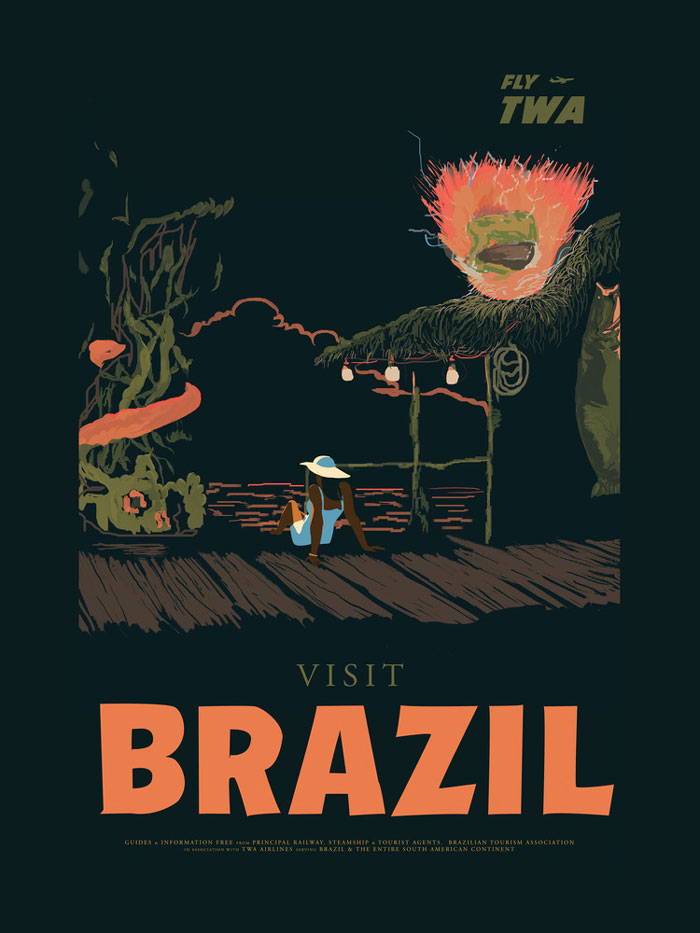 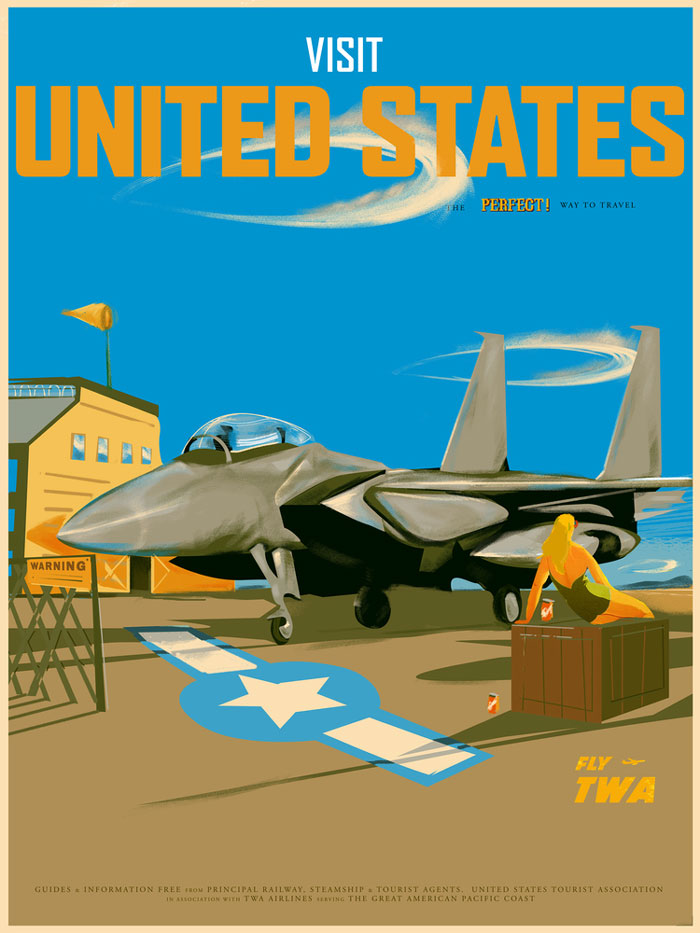 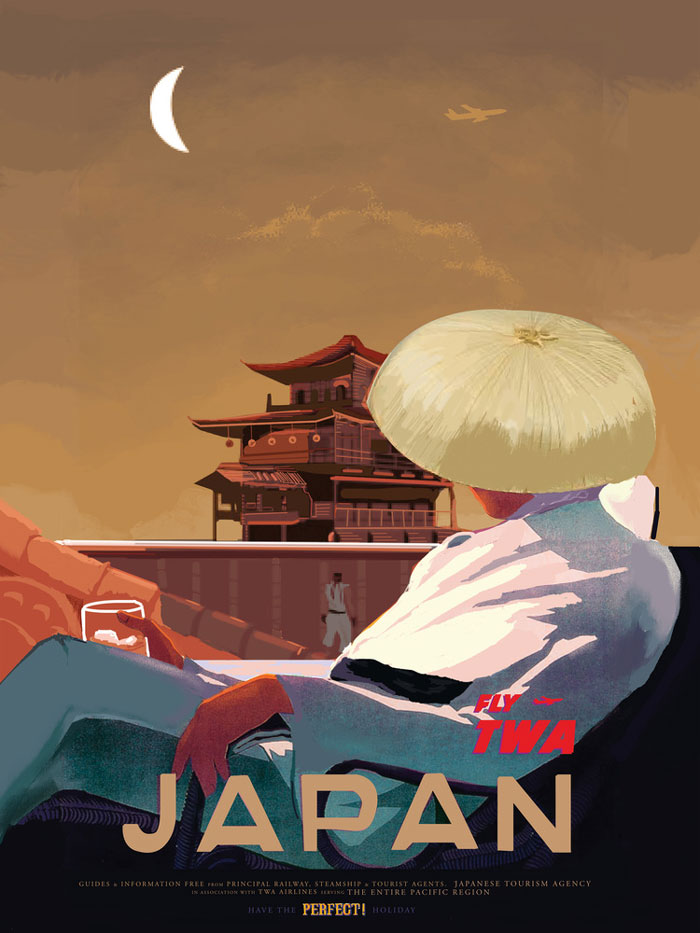 The Stunning Art Of George Redreev
Vintage Album Covers From Yugoslavia Are Amazingly Awkward
Artist Illustrates Everyday Life To Compare Chinese And Western Culture
Artist Shows The Beauty Of Insects With Her Matching Eye Makeup Looks
Artist Paintes Cute Illustrations To Show That Not All Monsters Are Scary
Daimler Buses Converts Mercedes-Benz Citaro For Transporting COVID-19 Patients
Hellboy, Evangelion, and Eight-Legged Mickey Mouse Mutant: Comic Art by James Harren
What Your Sleeping Positions Say About Your Relationships
The Green Lady Of Carroll Gardens Has Been Wearing Only Green For The Last 20 Years
'25 Things I’ve Learned' - Artist Writes 25 Inspiring Advices
'Staying Civil Right Down the Line' Campaign
Floral Aesthetic Tattoo Concepts by Jessie Cohen
Narrative Dramas Unfold In Robert Proch’s Multi-Dimensional Glitched Paintings And Murals
Photo Illustration Of A Yogi In A Spring Mood
New Wonderfully Witty Animal Comics by Liz Climo
Artist Creates 17 Illustrations To Reflect On Our Lives During The COVID-19 Crisis
This Mother Let Her Son Choose What She Wore For A Week
The Superb Sci-Fi Themed Works Of Su Jian
Suspicious Aliens in the Wild West: Superb Drawings by Mark Rogers
Brutally Honest Illustrations About Life
This Artist Has Turned Store’s Regular Trashcan Into A Trashcan For People’s Hopes And Dreams
Appreciate What You Have And Stop Comparing Yourself To Others
Walmart Keeps Posting Pictures of This Employee Posing With Stuff, She Goes Viral
Italian Artist Pietro Cataudella Combines Drawings and Real Objects Into Amazing and Funny Sketches
coronavirus, crisis, epidemy, politics, posters, USA

Politicallly Controversial and Ultra-Violent Illustrations by Baphoboy
"A Time Of Love And War": Amazing Digital Art By Wang Ling
I Survived The "SHIT SHOW" 2020 Commemorative Coin is Here!
DeLorean Motor Company
"When Worlds Collide": The Strange, Beautiful And Surreal Mash-Up Art Of Igor Skaletsky
How Medieval Artists Saw Elephants: Claws, Hooves, Trunks Like Trumpets, And Castles On Their Backs
This Russian Facebook Group Is Recreating Famous Paintings While Isolating, And They’re Brilliant
Artist Illustrated What Would Happen If Famous Cartoon Characters Fused Together, And Here’s The Result
"Stranger In A Strange Land": The Striking And Futuristic Artworks By Stuart Lippincott
The History of...
Source of inspiration since 2007. Proudly hosted by WebHostingBuzz.
Privacy Policy · Terms of Service · Content Removal Policy 🇺🇦 ❤️