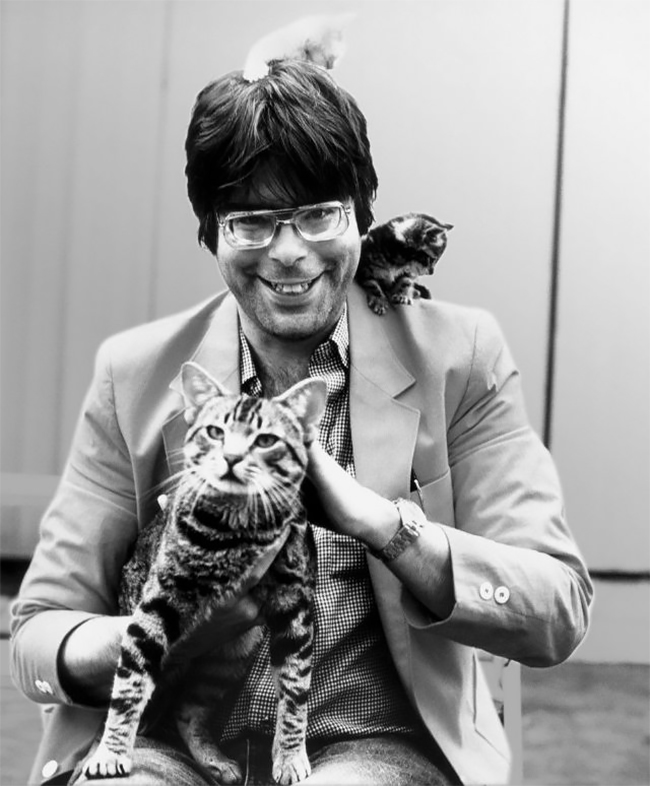 “Cats were the gangsters of the animal world, living outside the law and often dying there. There were a great many of them who never grew old by the fire.” ― Stephen King, Pet Sematary. 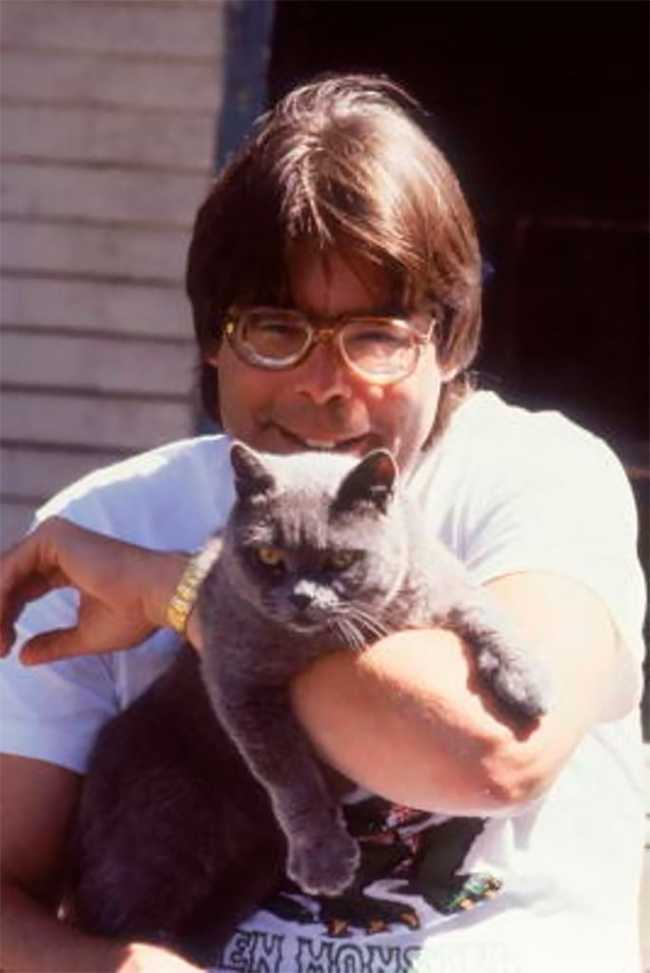 Horror, fantasy, and science-fiction author Stephen King has written 49 novels, nine collections of short stories, and five non-fiction books. He is also well-known for the many films based on his work, including The Shining (1980), Stand by Me (1986), and Pet Sematary (1989). 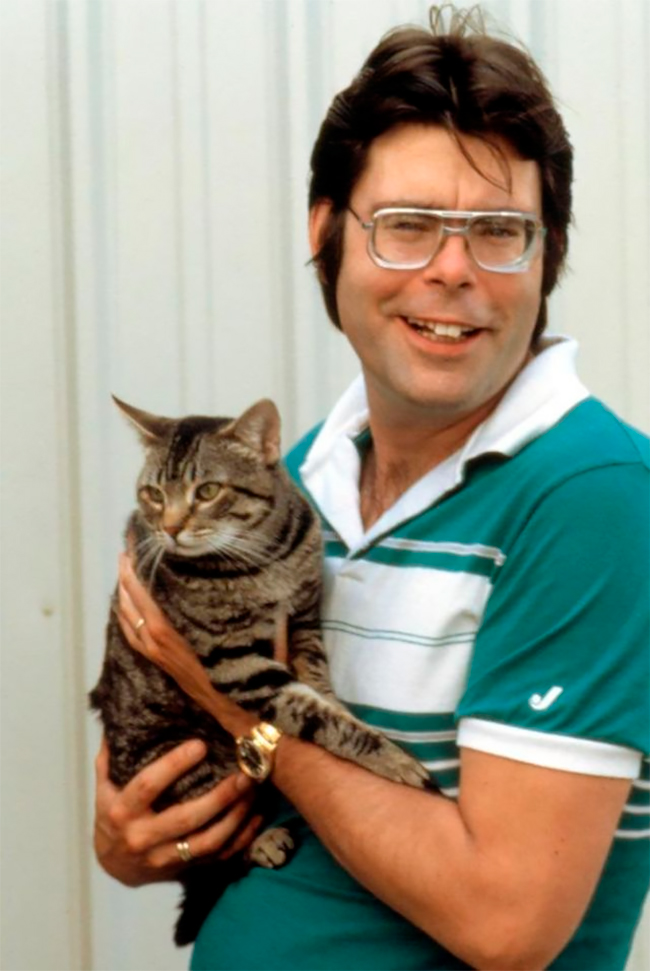 The 1985 film Cat’s Eye (1985), written by King and based on his stories “Quitters, Inc.” and “The Ledge” features a mysterious cat protagonist throughout the three-chapter anthology. 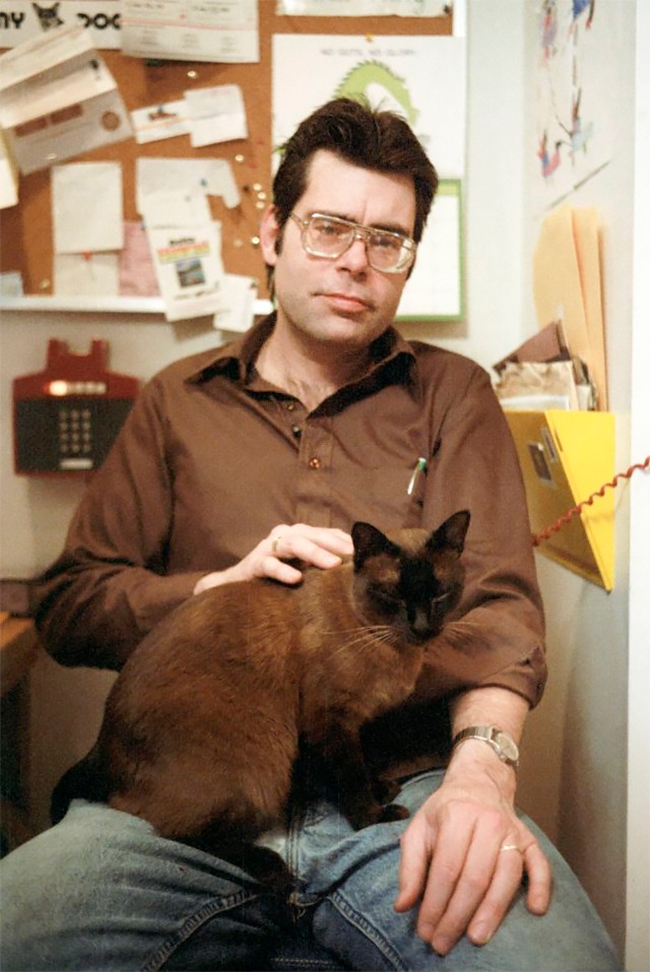 Despite once writing in a short story that “it might be that the biggest division in the world isn’t men and women but folks who like cats and folks who like dogs,” it seems that the King family does in fact keep both cats and dogs as pets. 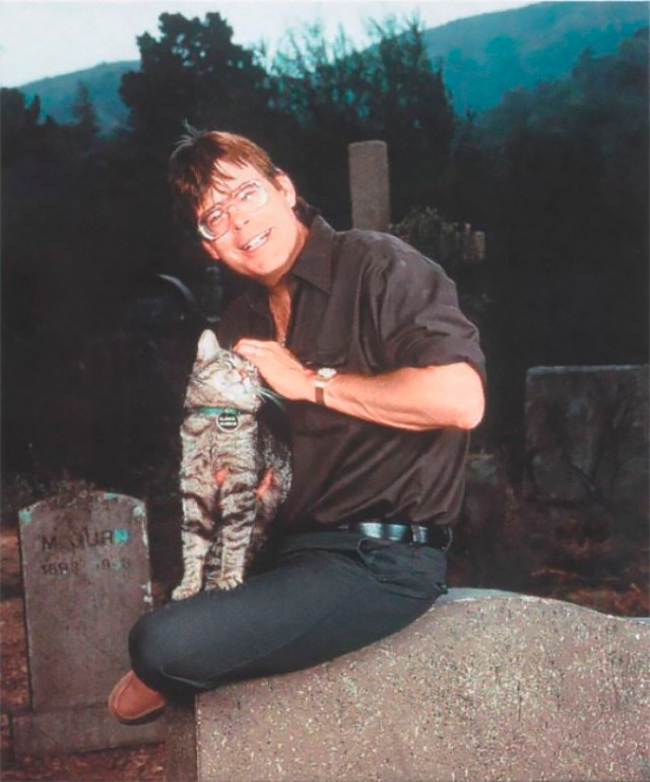 Angelina Jolie at 1995 Marcel Indik Photoshoot
Black Model Recreates Famous Fashion Campaigns To Highlight Lack Of Diversity In Fashion Industry
Photographer Captures Photos Of Empty Budapest During The Coronavirus Quarantine
Ohio Youth Of The 1970s – Lovely Photos Of Long-Haired Teenage Girls In Dayton From 1974-75
Incredible Winning Images of The Nature Conservancy Australia 2021 Photo Contest
A Look Back At Playboy Bunny Girls
13 Inspiring Winning Photos Of The 2021 International Photography Awards
Titanic Artifacts To Go To Highest Bidder At 100-Year Anniversary Auction: Who Will Buy $189 Million Collection?
Before Facebook: This Is How We Used to Unfriend People Back Then
Georgian Photographer Makes “Autoportrait” Series To Convey Her Feelings Towards Art
These Portraits Show How People Are Just Like Their Pets
7th Annual Focus on Nature Photo Contest Winners
Dramatic Underwater Portraits That Are Reflective Of Overcoming Troubles In Artist's Life
Incredible Vintage Photographs From The Gibson Archives Of Ships Wrecked On British Coasts
This Travel Account Will Make You Feel Like A Kid Again
Katy Perry as Elizabeth Taylor
"Just Another Day In L.A.": Photographer Captures Fantastic Aerial Shots Of Los Angeles
Walking with Giraffes
Candice Swanepoel for Muse, Summer 2012
Fascinating Black and White Pictures of New York Street Life in the Late 1960s
Hong Kong’s Human Battery Hens: Claustrophobic Images Show How Slum Families Squeeze Their Lives Into The Tiniest Apartments
Lovely Vintage Photos of Rock Stars Posing With Their Kitty Cats
The Russia You’ll Never See On Postcards Through The Lens Of Photographer Alexander Petrosyan
The Best Photos From The B&W Child Photography 2015 Photo Contest
Photographer Teemu Jarvinen Captures The Night Around Asia And The World
Internet K-hole: the Best Photo Blog You've ever Seen!
Beautiful 'Then And Now' Pictures Of Women From London's '80s Subcultures
Photographer Stijn Hoekstra Captures Empty Amsterdam During Curfew
Cool Old Photos Show What School Looked Like In The 1970s
Beautiful Black And White Portrait Photography By Daria Pitak
1980s, cats, pose, stephen king