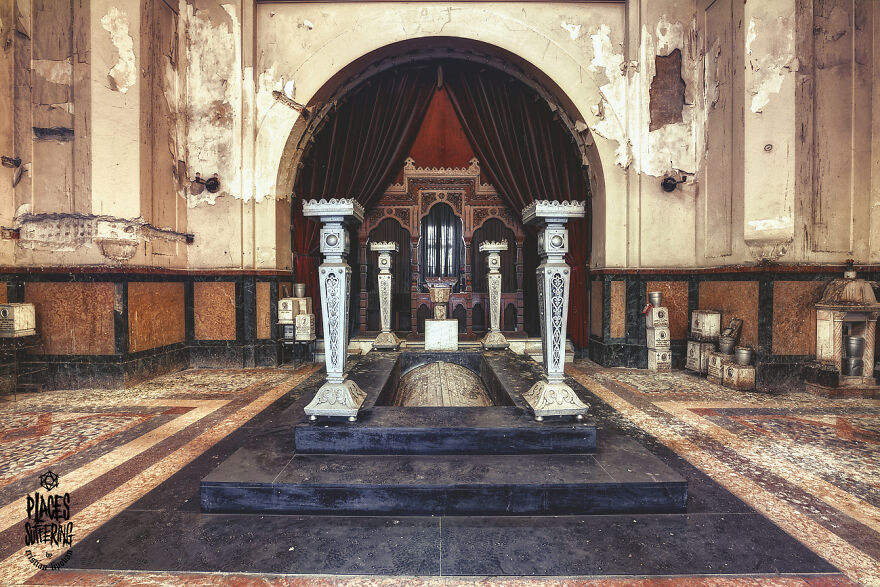 Photographer Cristian Lipovan (previously) is fascinated by abandoned places, devoting his time to urban exploring – seeking out intriguing and long-forgotten churches, schools and houses and documenting how they look after the people have all moved on.

According to Cristian: “It’s been a long time since the thought of exploring this crematorium made its way into my curious mind. Still, every time I tried to enter, all sorts of difficulties prevented me from doing so. This time, though, I got lucky. I found a way to get inside.

This crematorium is definitely one of the top 10 buildings I have explored. I don’t know how to describe it. Sinister? Lonely? For me, it was at least interesting. I leave it to you to discover what emotions the series of photos convey.” 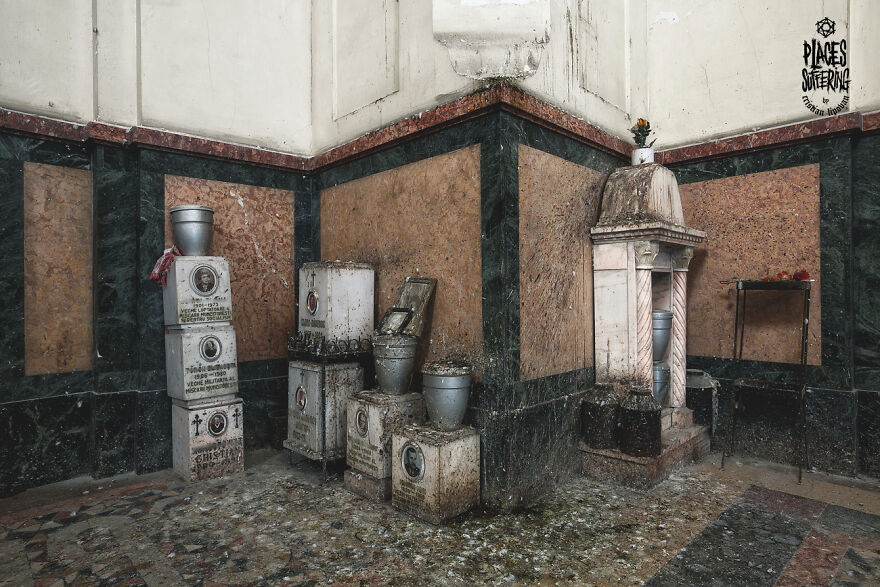 “I only took a few steps into this sleeping building to be greeted by the suffocating scent that almost made my heart beat out of my chest but also increased my curiosity. There were urns with ashes everywhere, abandoned, their past wiped out, their memory forgotten. I stepped into the funeral home, where all religious services took place. The bodies used to be lowered through a slit into the basement, where the ovens were silently waiting.” 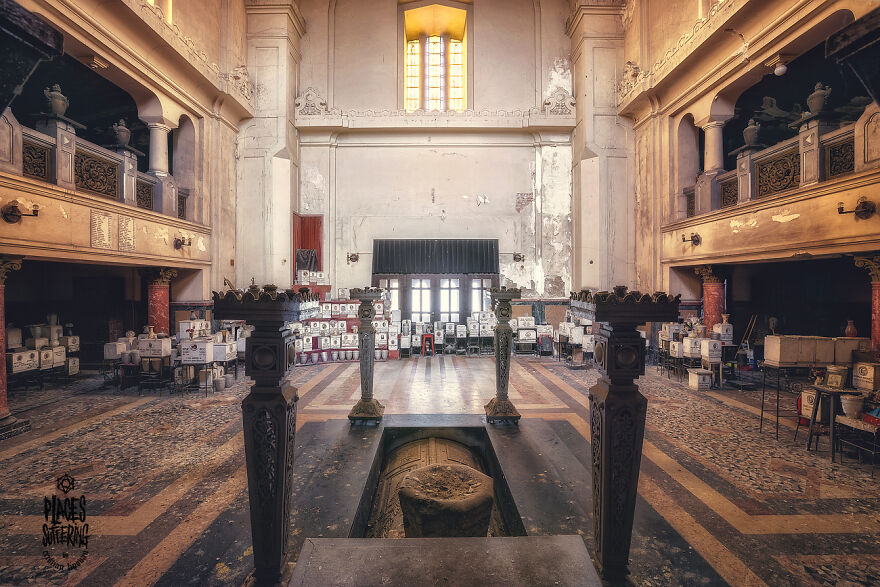 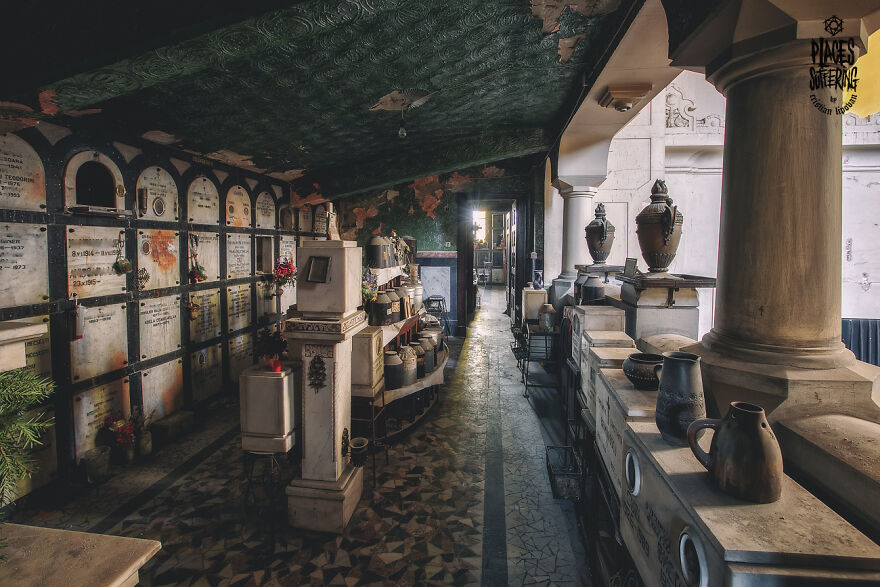 The library of souls 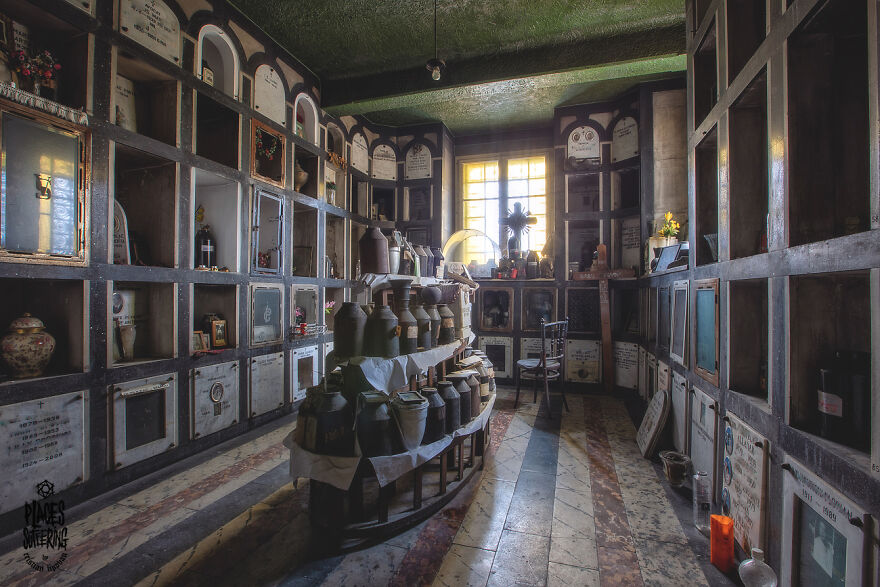 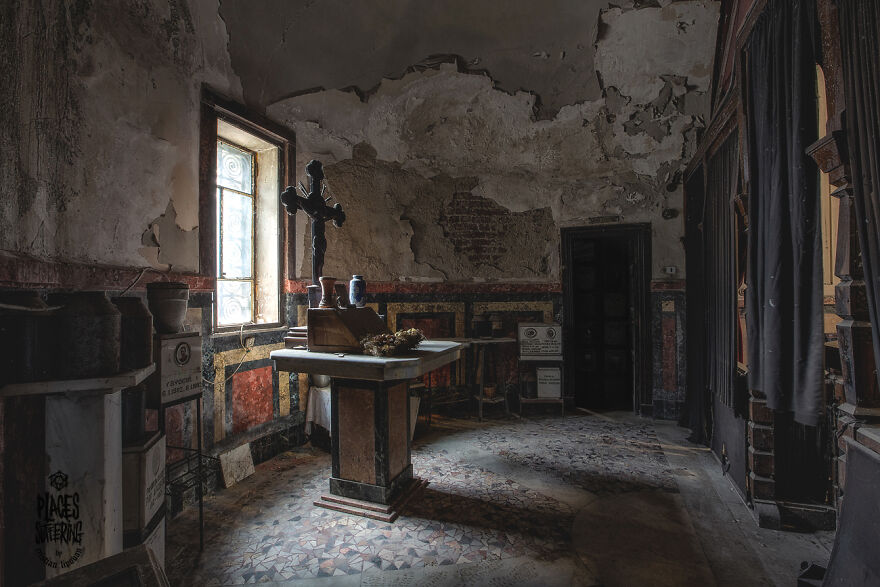 “I also went down the stairs, as I was inquisitive about what secrets were kept in that room. Inside, the smell was stronger, heavier. The walls were dark and chipped, a sign of decay, of rotten misery. I would say that not so many people would like to see themselves inside such a place. Pushed by curiosity, I found myself in front of a lonely black door. Hidden behind it was a room sheltering coffins, crosses, and urns, which, in their turn, were supposed to shelter the last remaining image of a memory.

Along the way, I discovered several rooms, all of them dominated by darkness. Some stairs led somewhere under the ovens. I hardly gathered the courage to go down. Darkness is all there was. I lit my flashlight, and all around me were spider webs, like curtains drawn after the show. No one has been down there for a long, long time. At first, I saw all sorts of strange objects lying around and even more coffins, but then, as I looked deeper, hidden behind an oven, were remains of human bones. That moment was the hardest to bear.” 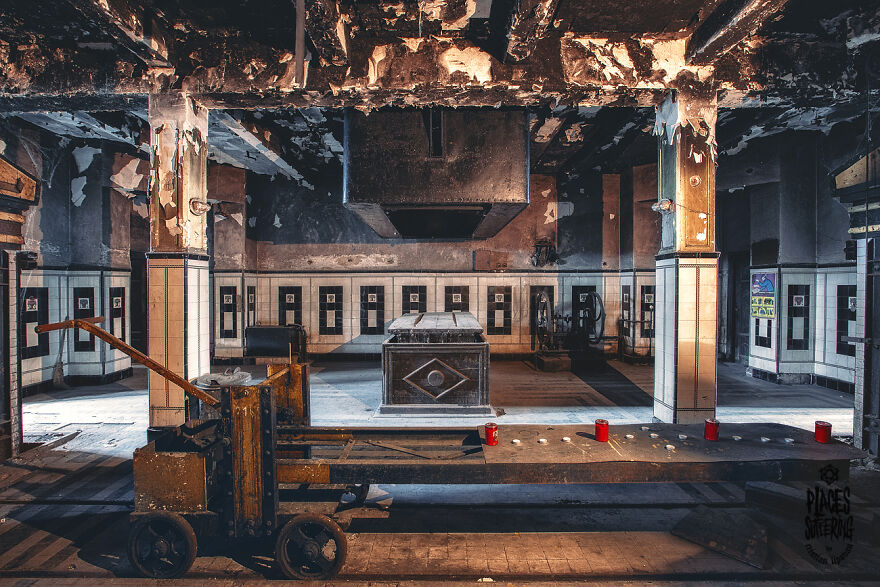 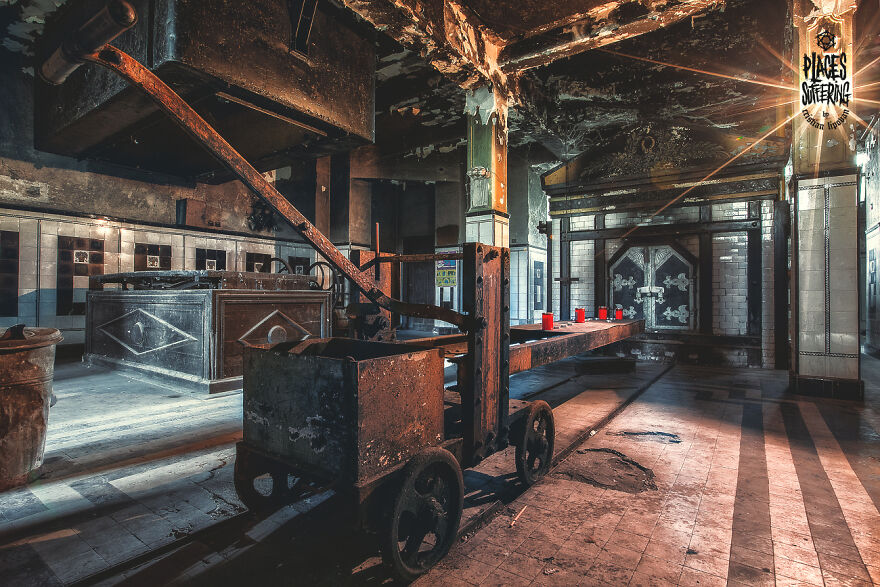 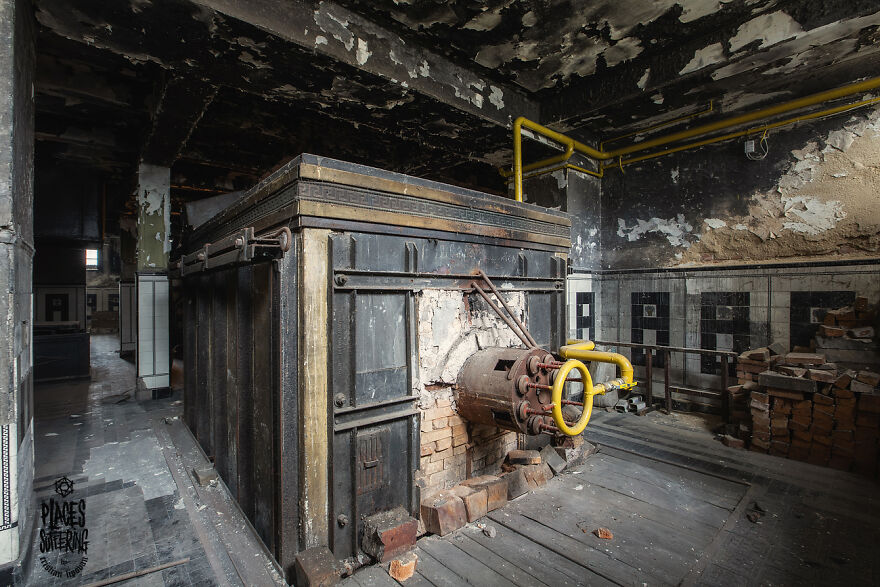 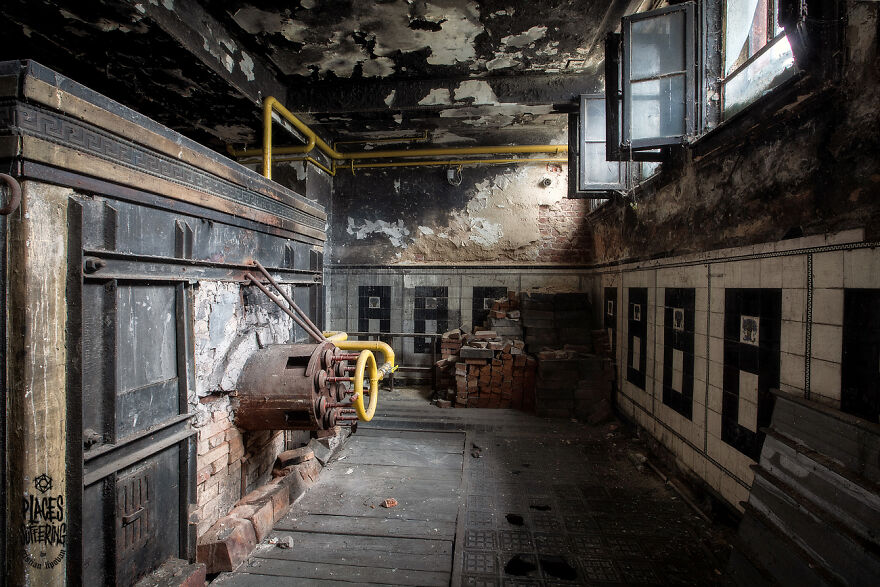 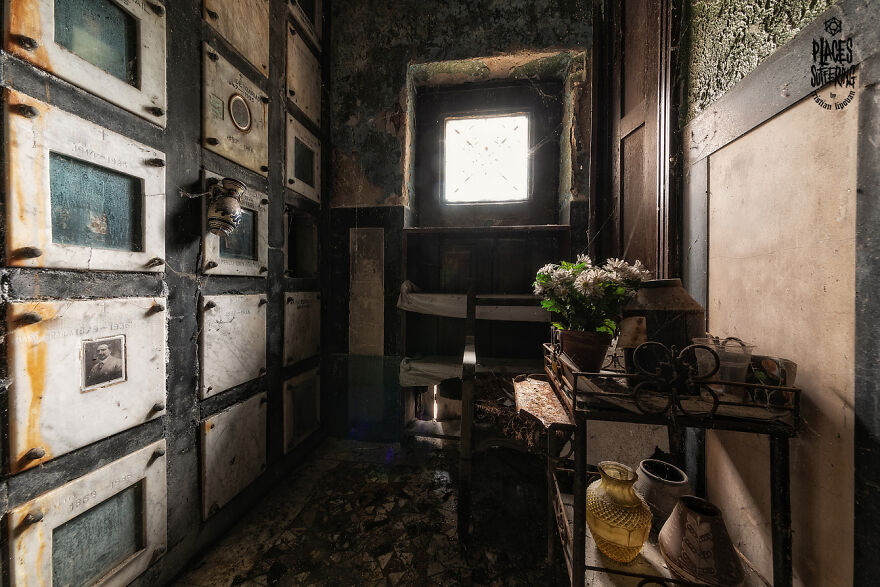 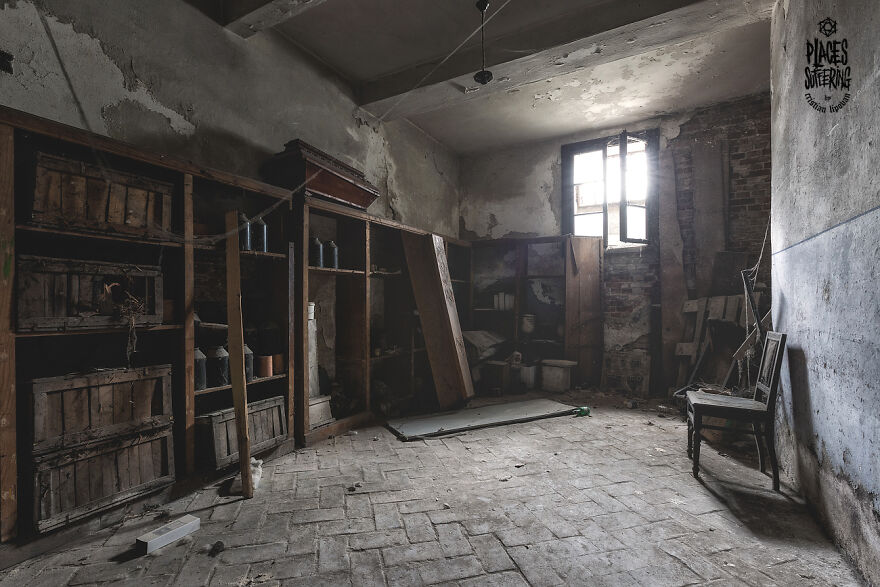 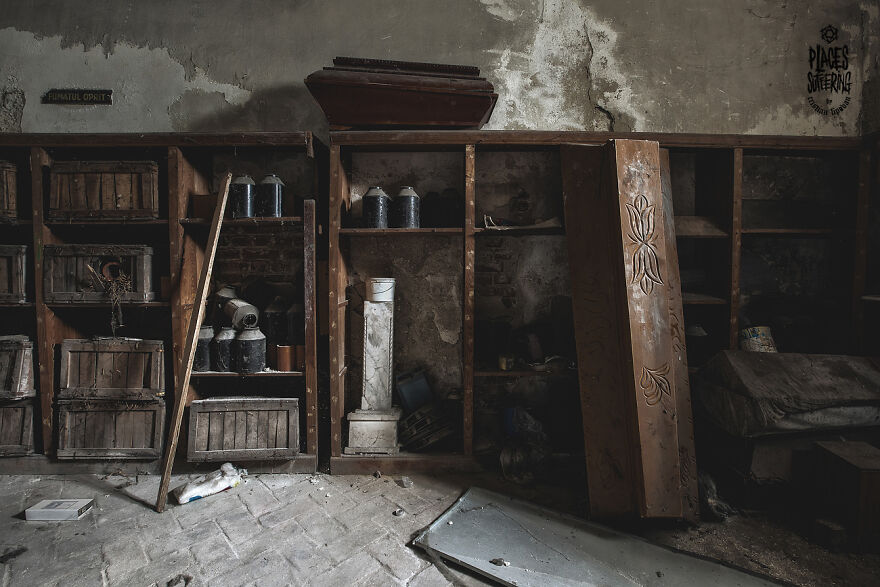 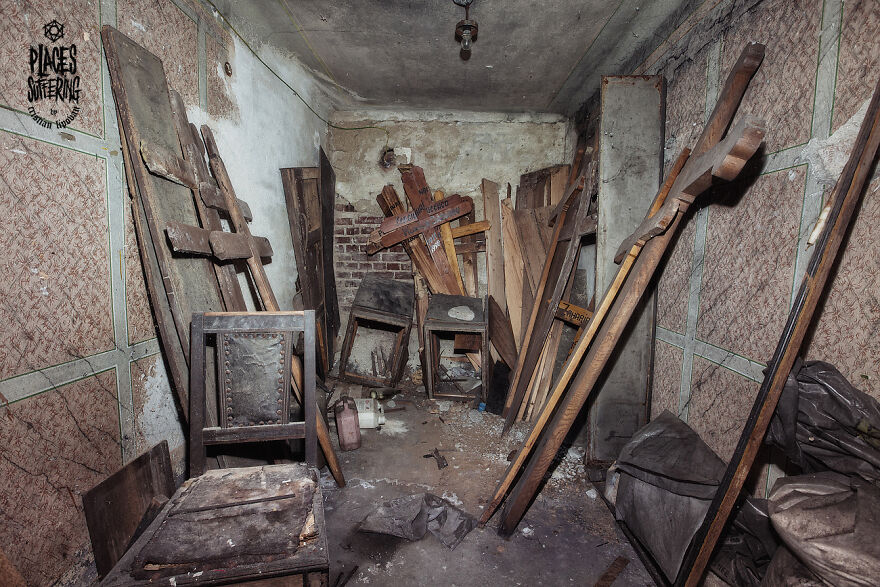 The remains of human bones 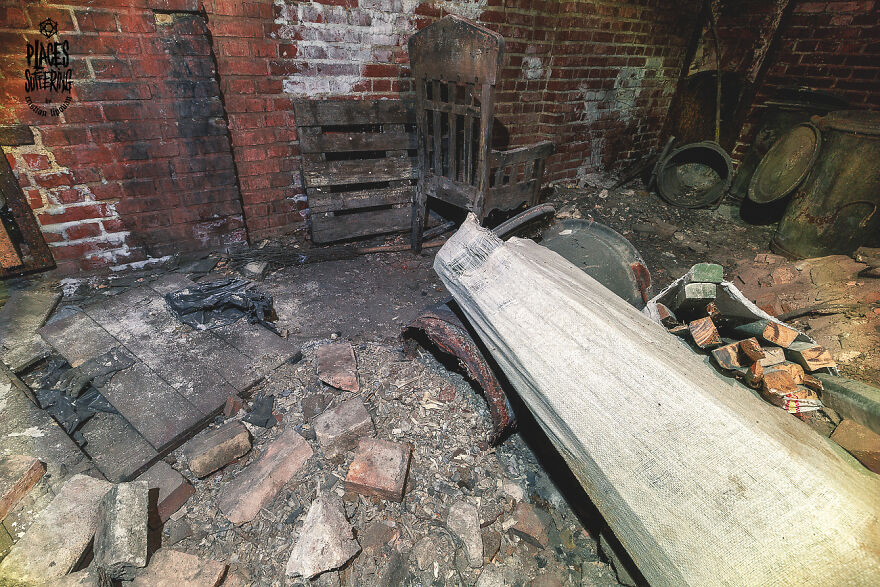 Sense Of Water: The First And Highly Anticipated Photo Book By Finnish Photographer Susanna Majuri
"Geometrical Asia": Minimalist Street Photography Series By Víctor Morante
68 Nostalgic Images Of The Greatest Pop Culture Legends In History Shared By Morrison Hotel Gallery
"Within Two Worlds": Incredible Dazzling Night Sky Photos By Astro Photographer Brad Goldpaint
The Egg Driver
Men And Women Before 10 A.M. By Veronique Vial
Audrey Hepburn: Portraits of an Icon
Photo of the Day: A Leopard Walks With Its Head Stuck
Photographer Steve McCurry's Photos Show The Complex Relationship Between Humans And Animals
Photographer Matthew Christopher Captures This Abandoned Theater Act As A Time Capsule Of A Location That Was Once Rocked By The Stars
Small Wonders in the Water
Cool Pics That Capture People Posing With Their Fiat Cars In The 1920s And ‘30s
Aurélien Bigot & Richard Forestier Create Still Photographs That Look Like Impressionist Paintings
A Daredevil Photographer is Determined to Capture London in a Whole New Light – by Scaling the City’s Many Rooftops
Snapshots of a Family Trip to Michigan’s Prehistoric Forest in 1979
Amazing Winners Of The 2021 iPhone Photography Awards
Breaking Bad Finale in Real Life
"Creatures Of The Cold": Spectacular Winning Photos Of The Annual Antarctic Photography Exhibition
Photographer Captures Otherworldly Light Pillars In Northern Ontario
Royal Society Of Biology Photographer Of The Year 2019: The Shortlist
Before She Was Famous, Marilyn Monroe Was Paid Just $10 an Hour to Pose for Pin-up Artist Earl Moran in the Late 1940s
Instagram Account “Influencers In The Wild” Exposes People Who Are Willing To Do Everything For A Photo
Soviet Ghosts: The Ruins of the Communism
Humorous Photography by René Maltête
abandoned, crematorium, Cristian Lipovan, explorer, urban