Out Of Character Star Wars Paintings by Kyle Hagey

See your favorite intergalactic personalities like never before by gazing at these out of character Star Wars art prints! They depicts iconic characters like Darth Vader, Boba Fett, and C-3PO lounging in flower filled meadows.

These hilariously weird artworks are created and sold on Etsy by Kyle Hagey who describes his creative process as follows: “Once I have some stuff thought up, I merge it into a scene, hate it, delete half and tell myself I’ll just live in the woods instead.” 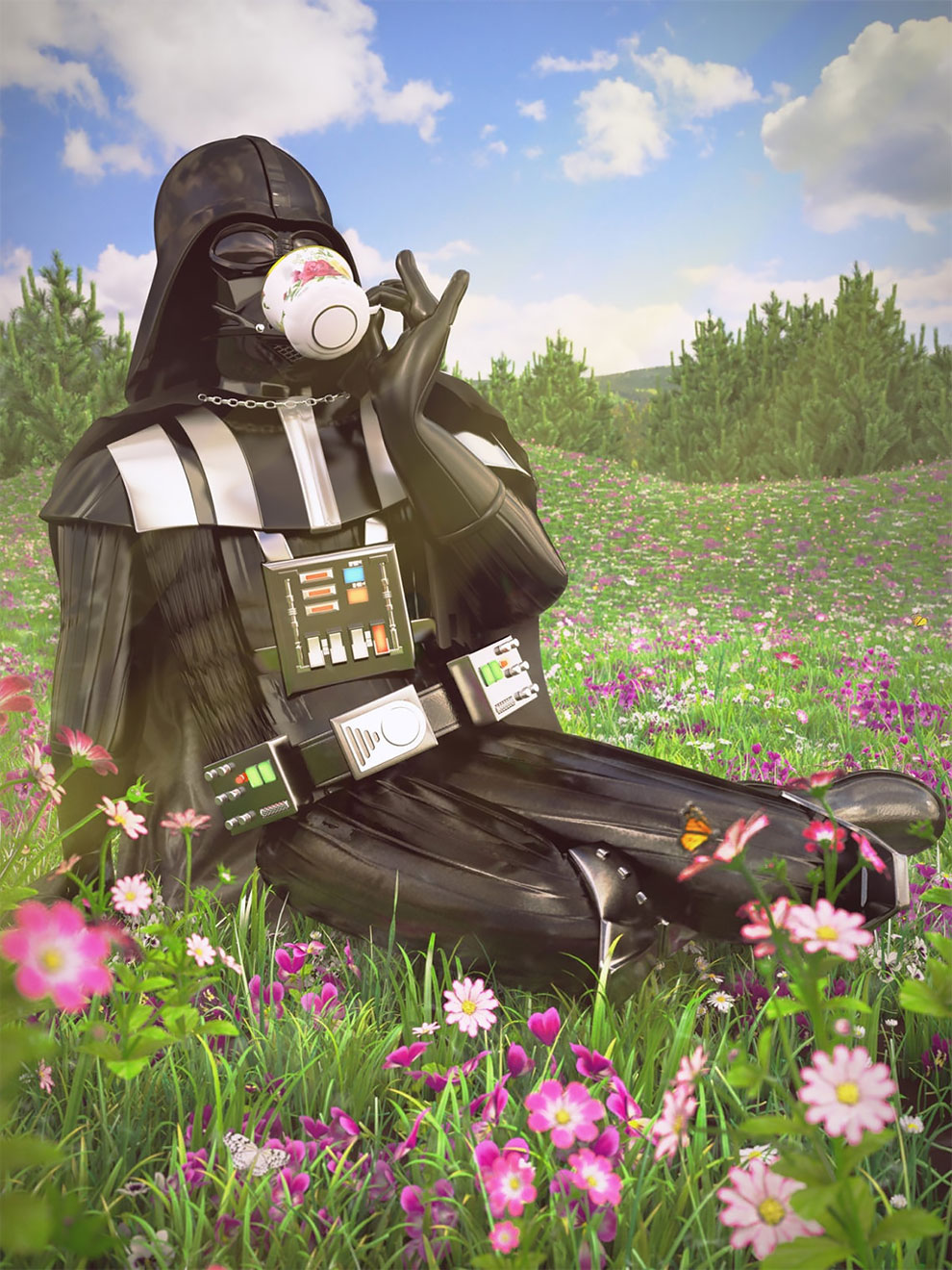 “Here’s Darth just sipping some bomb ass tea minding his own business. Maybe he’s plotting some evil deeds. Or maybe he’s just pondering his life and how it got to this point. I can’t really say for sure.” 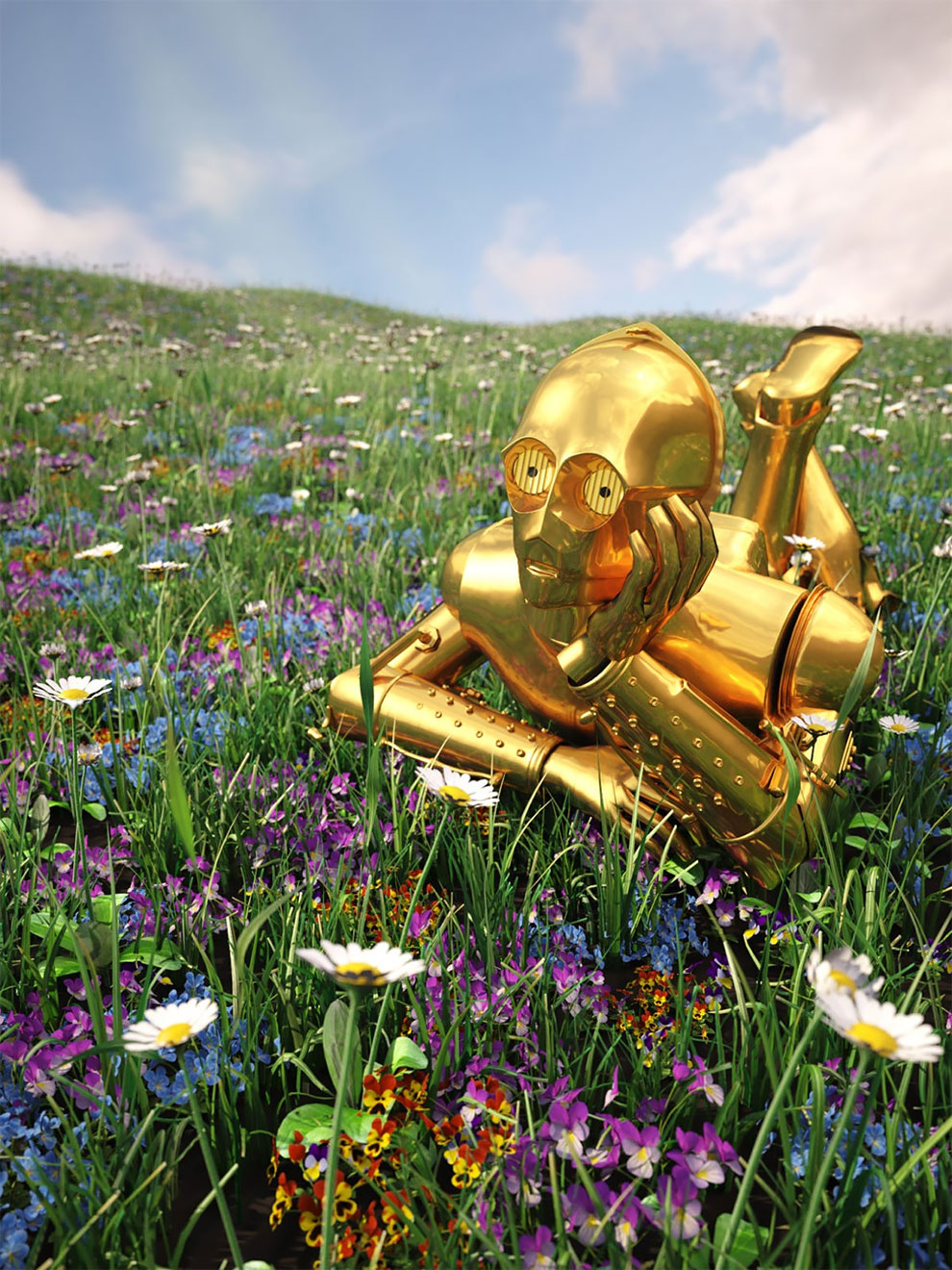 “C-3PO laying around in some flowers. I have no idea why I made this. Just thought it’d be nice.” 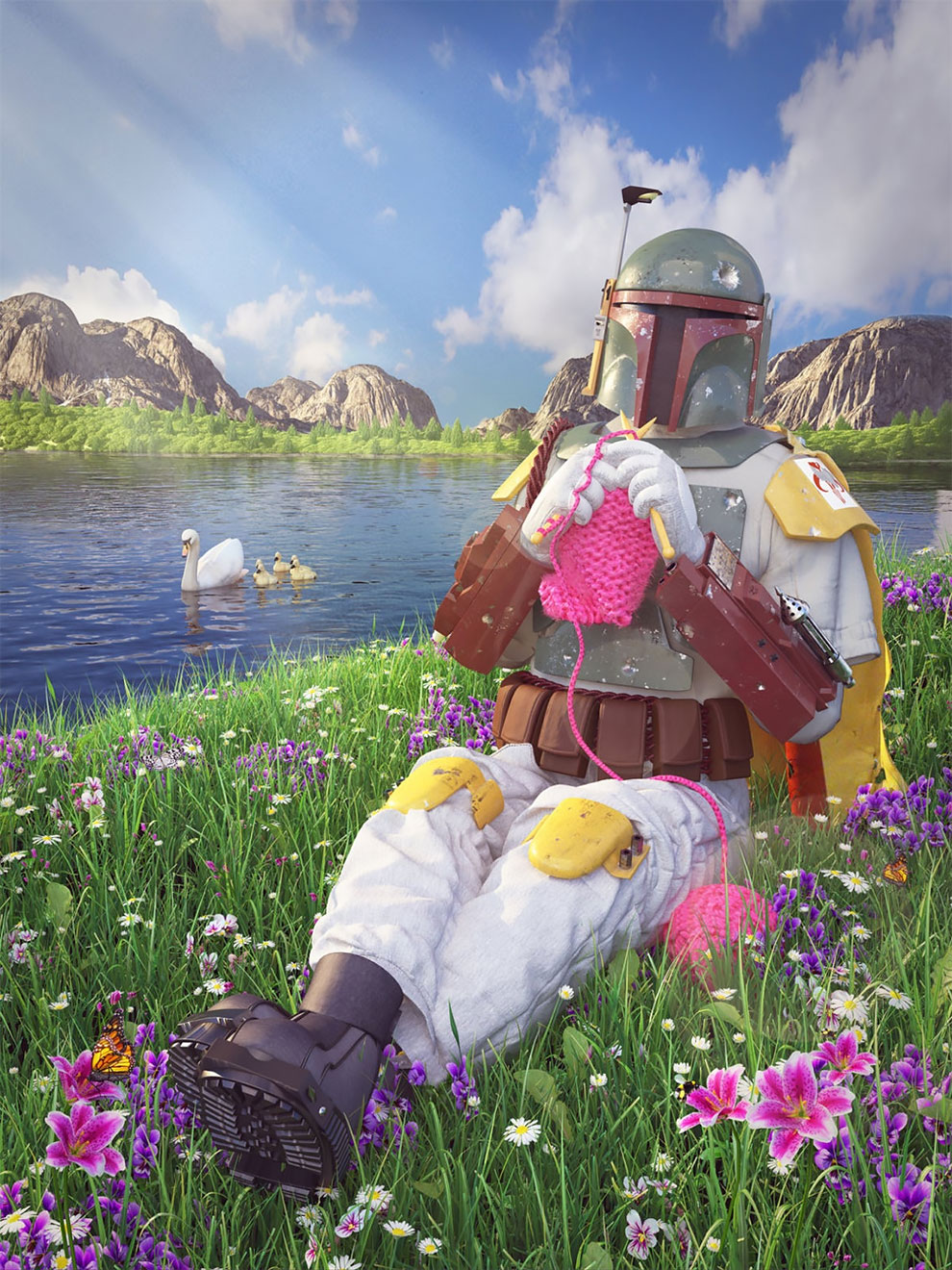 “Boba Fett – a master bounty hunter who’s galaxy renowned for his killer instincts and stalkerish ways. But who is the man behind the mask? What are his dreams? Aspirations? Regrets? He may seem fierce, but he can’t pull the wool over my eyes. Sorry. My puns are lame.” 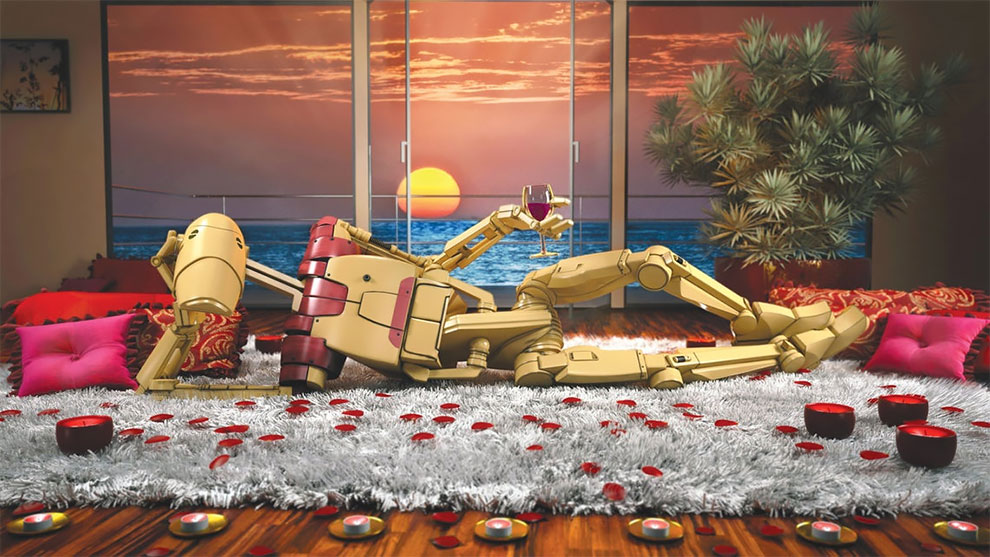 “If you’re wondering what’s going, well, I don’t know either. I guess it’s a boozed up droid enjoying his (or her) day off from shooting stuff. Not sure why I made this. I just thought it would be funny. If you like it let me know and I’ll make more weird Star Wars pictures. If you don’t like it that’s okay too although it’s a little odd that you’re here looking at it.” 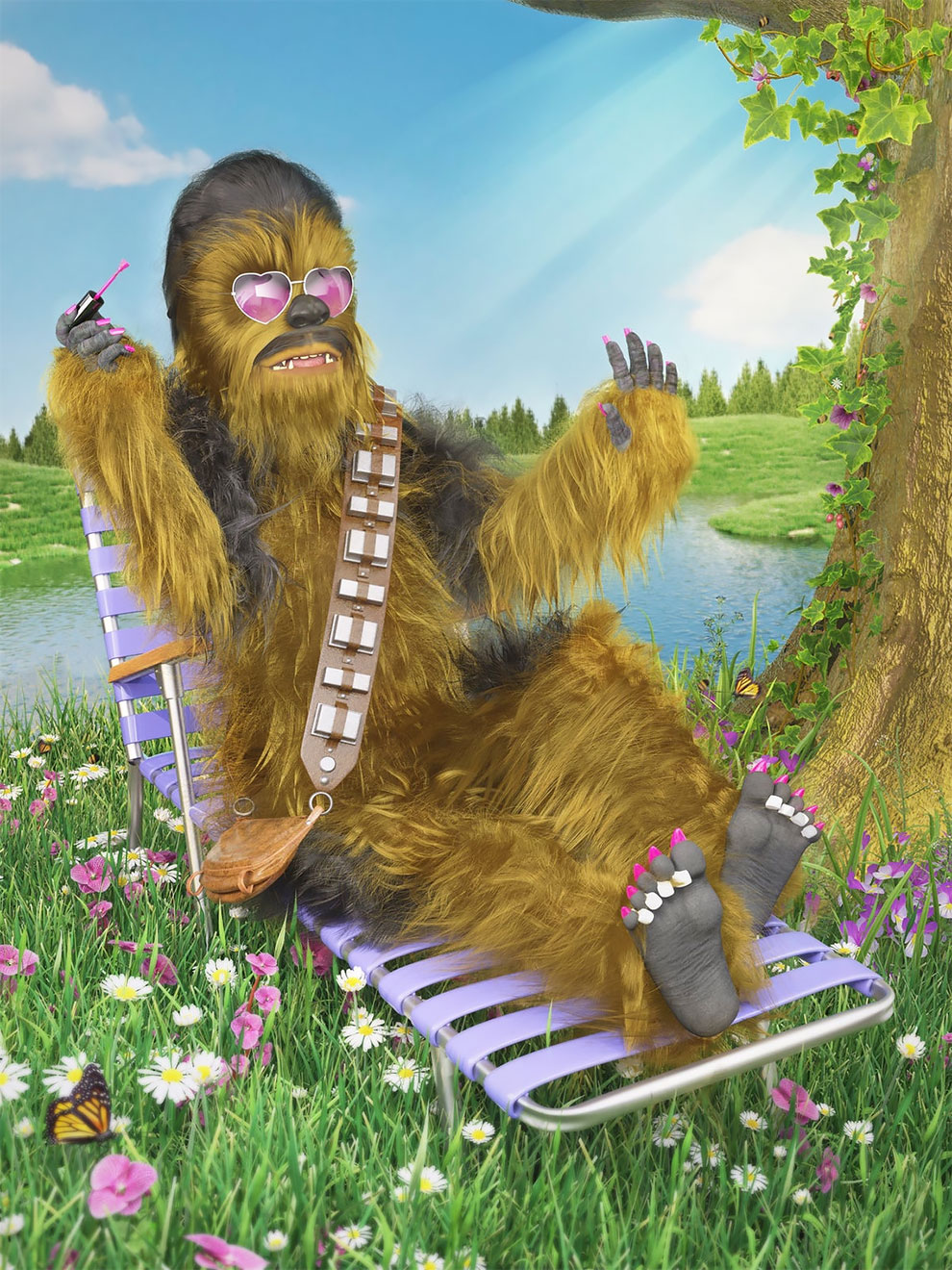 “Here’s a pic of Chewie just kickin’ back getting his nails did after a long day of shooting stuff.” 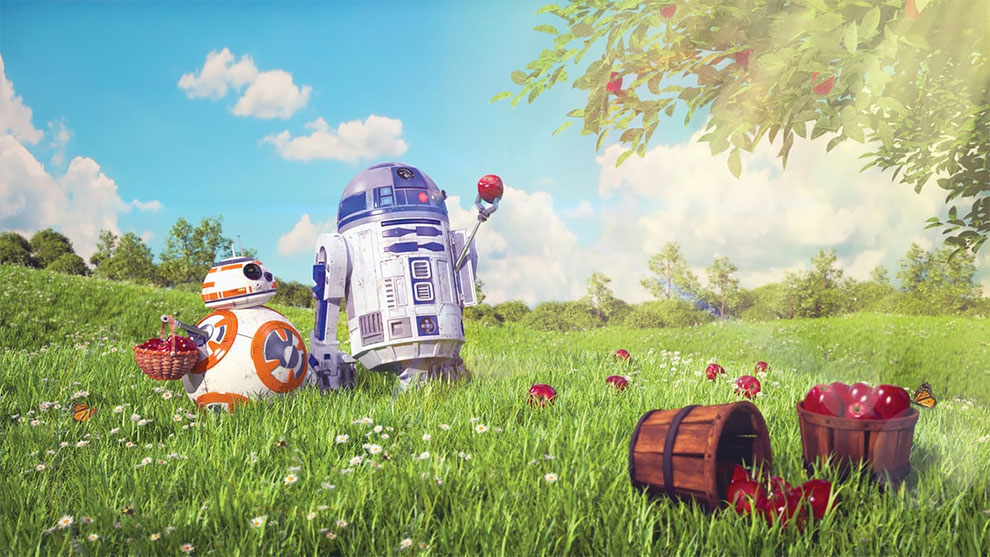 “An apple a day keeps the robots at play.” 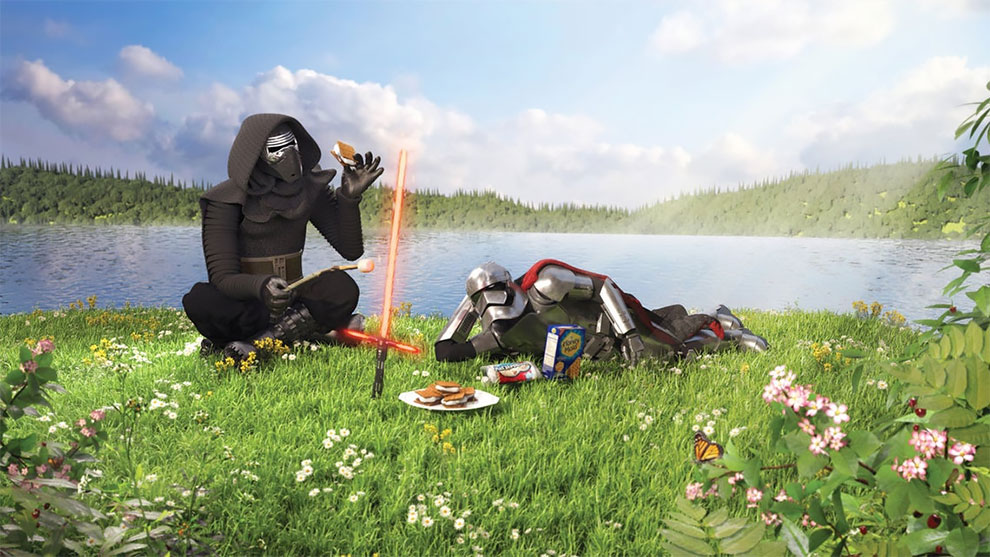 “Here’s Kylo Ren and Captain Phasma just taking it easy munchin’ on a couple s’mores. I wish I had a couple s’mores… Does anyone else think the word s’more looks weird? That’s really how it’s spelled. I looked it up. Can’t they just be spelled smore? We all know what smore means. It’s not like someone won’t understand unless there’s the ‘ part in it. Sorry I should just stop typing.” 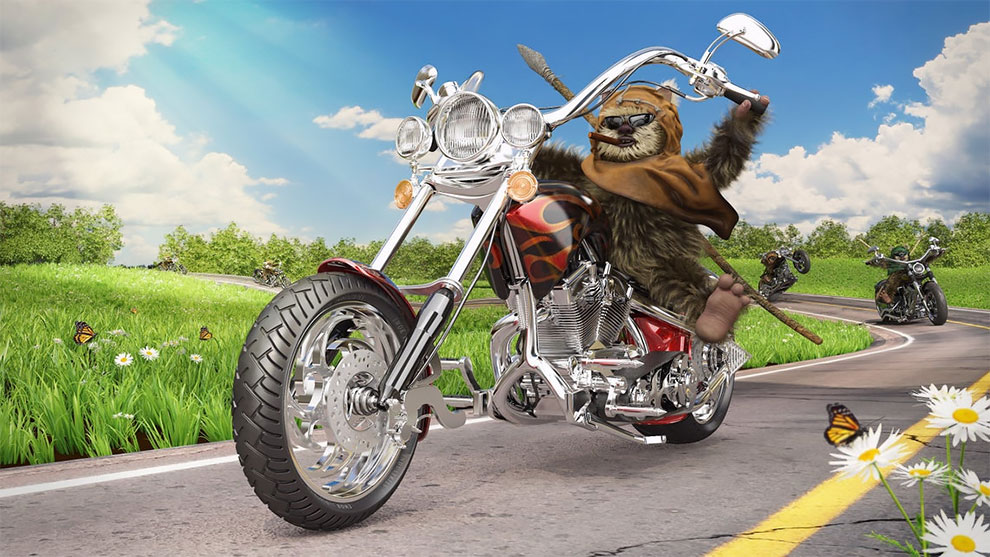 “Just a couple of Ewoks enjoying a nice sunny day, yubbin’ and nubbin’ their cares away. Also I found out while making this picture that motorcycle gangs really don’t like to be called gangs. They prefer the word club. Not sure why I included that in here, but I guess it couldn’t hurt.” 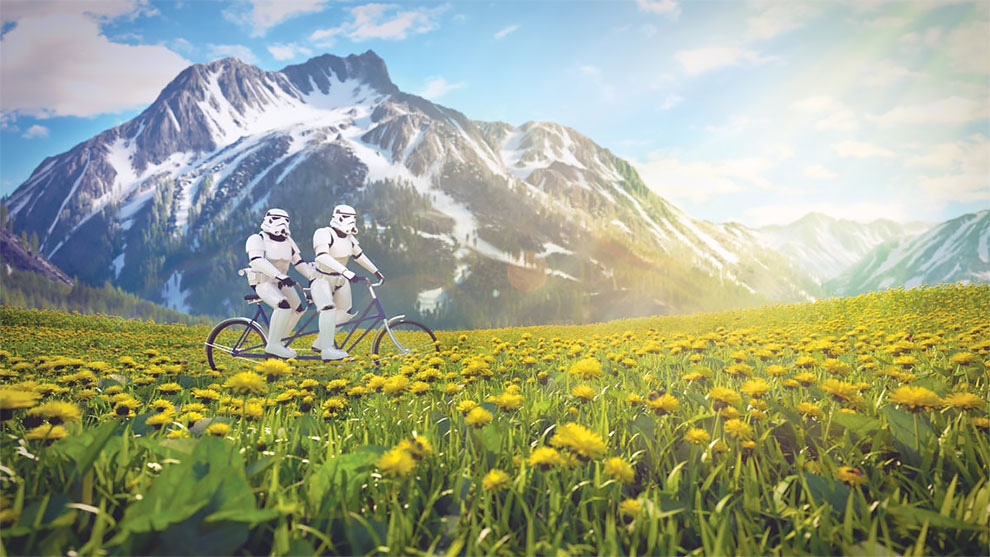 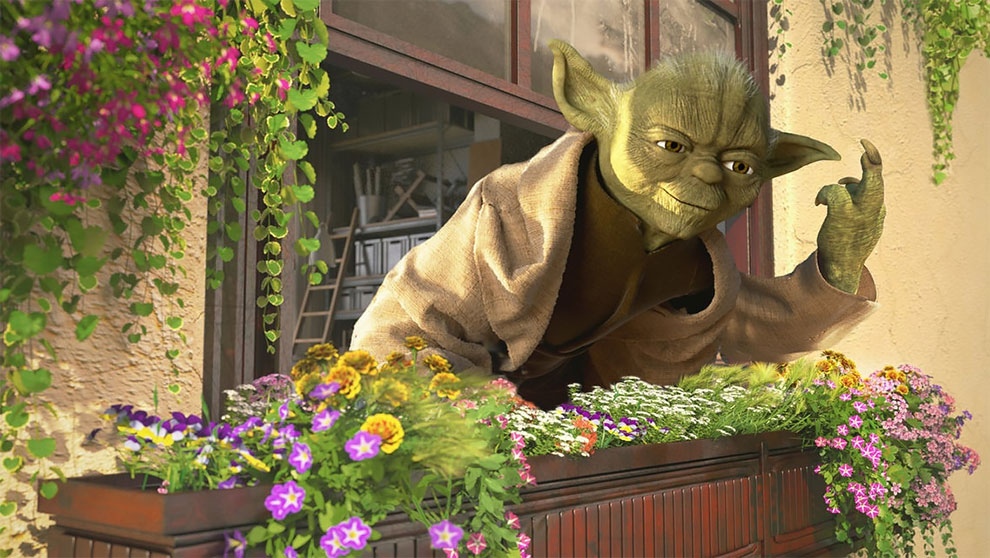 Giant Baby Looks Over Tecate, The US-Mexico Border Wall
Men Have Started Decorating Their Beards With Flowers For Spring
Unicorn Macarons Are The Most Lovely And Magical Dessert Ever
Hyperrealistic Depictions Of A Fictional Mouse-Butterfly Species By Lisa Ericson
This Artist Makes A Living By Painting Celebrities With Pancakes On Their Heads
When A Simple Stain On The Carpet Turns Into So Much More
McDonald's Campaign with Cossette Montreal Reminds Movers to Take a Break During Moving Day
Cartoonist Fell In Love With Van Gogh’s Story And Paintings As A Teenager, Creates Illustrations Of Painter's Life
These Funnily Terrible Portraits Of Famous People Drawn By This ‘Artist’ Are Awfully ‘Accurate’
The Badass And Chilling Watercolor Paintings Of Misha Vyrtsev
Izzy Wheels Turns Your Wheelchair Into a Fashion Statement
Artist Creates Living, Breathing Paintings. This Is Anything But Normal.
Turkish Artist Recreates Iconic Movie Scenes Using Hundreds Of Thousands Of Tiny Colored Dots
Beautiful And Detailed Paintings In Resin By Feif Dong
Randy Lewis Creates Photo Manipulation Word Games That Will Make You Smile
The World of Fairy Tales: Dreamy Illustrations by David Listón
This Artist Uses Leftover Coffee To Create Beautiful Artworks
These Viral Visual Explanations Are Spreading Information About COVID-19 Extremely Effectively
Honest Illustrations By Barbara Daniels Showing Our Society If The Roles Of Humans And Animals Were Reversed
These People Recreated 50 Famous Artworks And Some Might Be Better Than The Originals
"Chapters Of Downfall": The Superb Digital Concept Art By Richard Anderson
Soft and Steel: The Heroic and Fantasy Paintings of Julie Bell
Surreal Inspirations By Anil Saxena
Georgian Couple Uses Fallen Leaves To Create Out-Of-This-World Art
Kyle Hagey, paintings, Star Wars