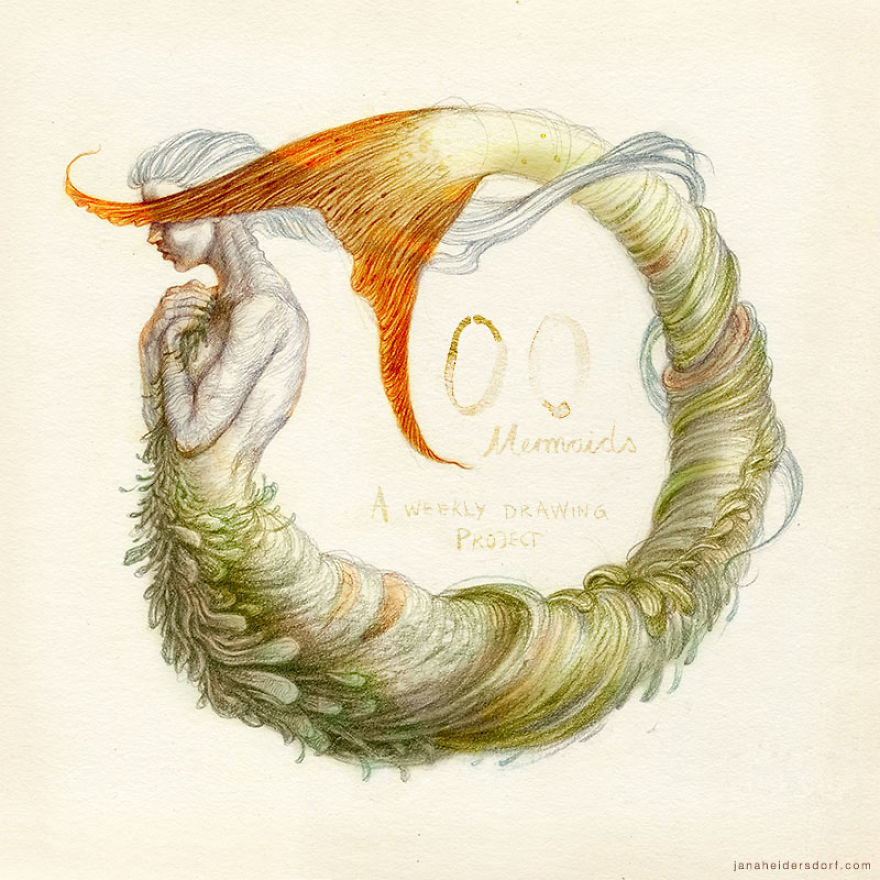 According to Jana Heidersdorf: “About two years ago I decided to start a weekly drawing challenge for myself: To do one mermaid every week until I have a full 100 (and then make them into a book, but that’s another story). As I am getting oh so very close to my goal (I’m at mermaid drawing number 97 right now!)

All these cool drawings are created with graphite pencils and colored digitally. If some textures look like watercolor to you, though, then you are not wrong. Throughout the series, my process has undergone some slight changes, including drenching the mermaid images with liquid paint once in a while.

‘But why mermaids’, you ask. ‘Are there not enough of them on the Internet already? Them mythological creatures with their luxurious hair and splishy-splashy tails?’

That is a good question, friend. I find mermaids a fascinating subject exactly because they are ubiquitous in fairytales and pop culture. We all have a certain image ingrained in our minds when we think of what a mermaid looks like, so it’s not only a challenge to come up with new drawing ideas, but it is more fun since we all have some common ground to start from.” 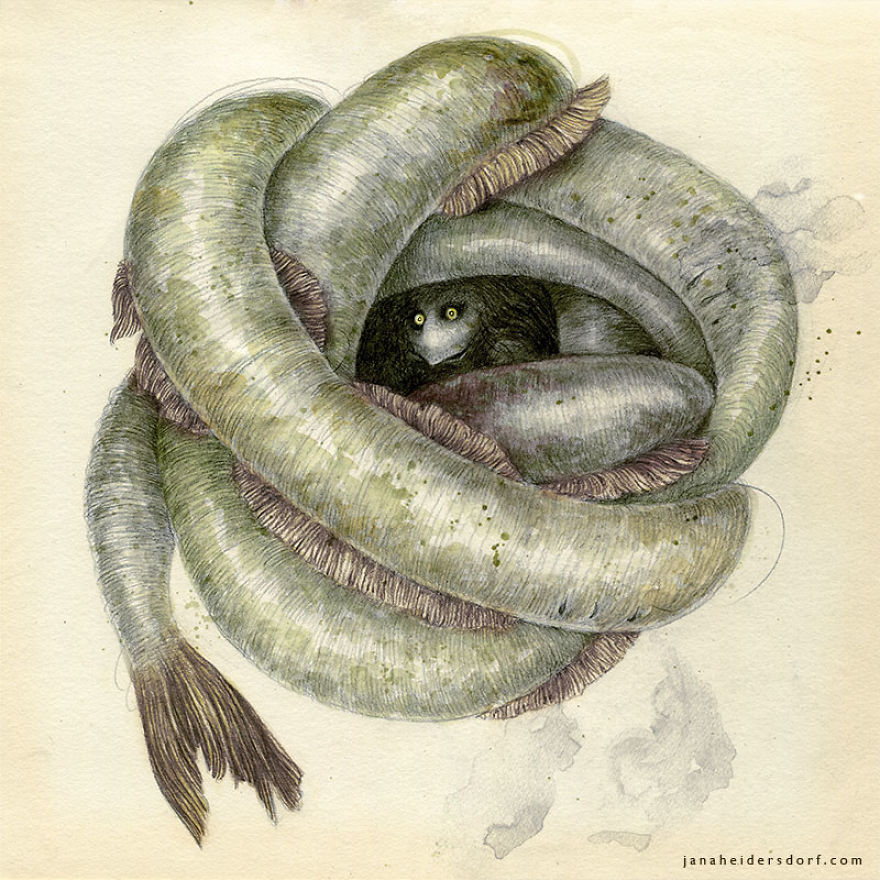 This mermaid is using her extraordinarily long tail to shield herself from outward influences and danger. Slime glands render her unappealing and poisonous to predators. 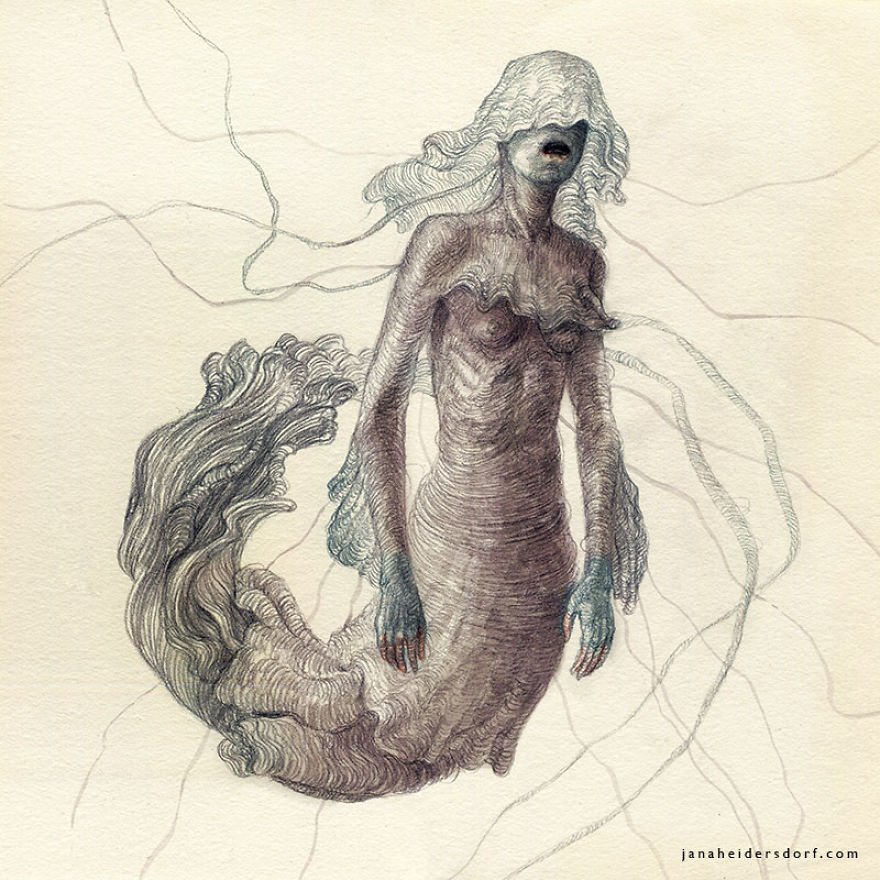 Don’t be fooled by this mermaid’s delicate appearance. Her translucent tentacles are reaching far, keeping predators and nosy scientists at arm’s length. Her touch can cause strong inflammations and death, earning her the name ‘Black Widow of the Deep’. 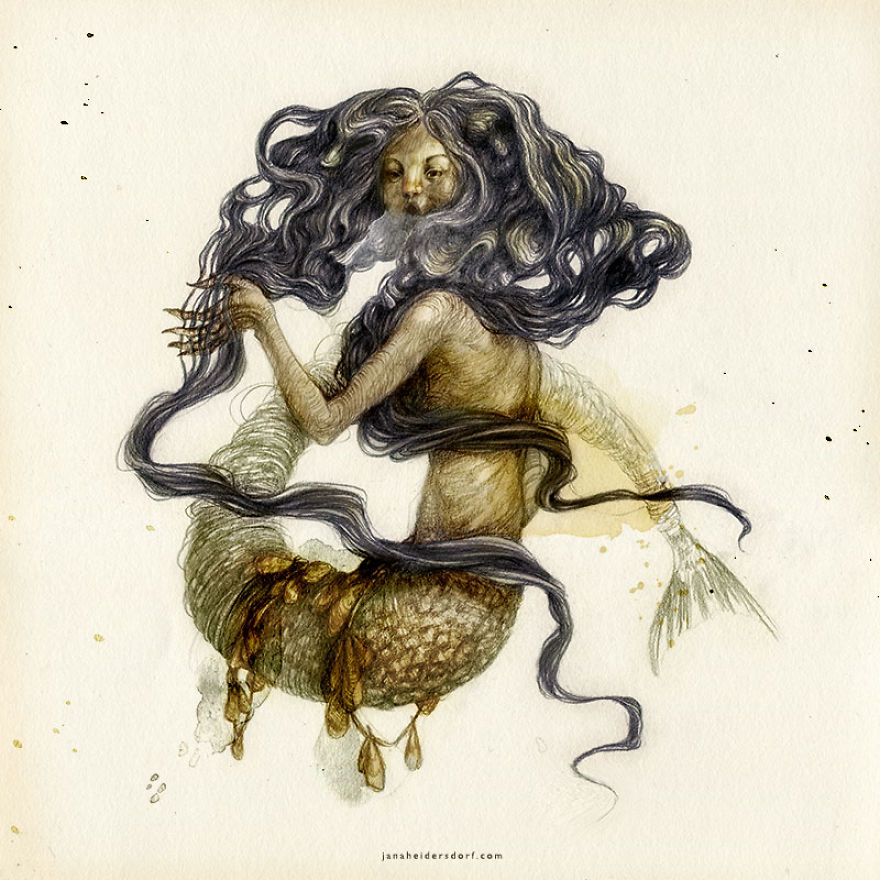 This solitary spirit haunts the Northern Pacific and Arctic Ocean, restlessly collecting and stealing the souls of every animate creature she comes across, eternally trying to fill the void of her own existence. 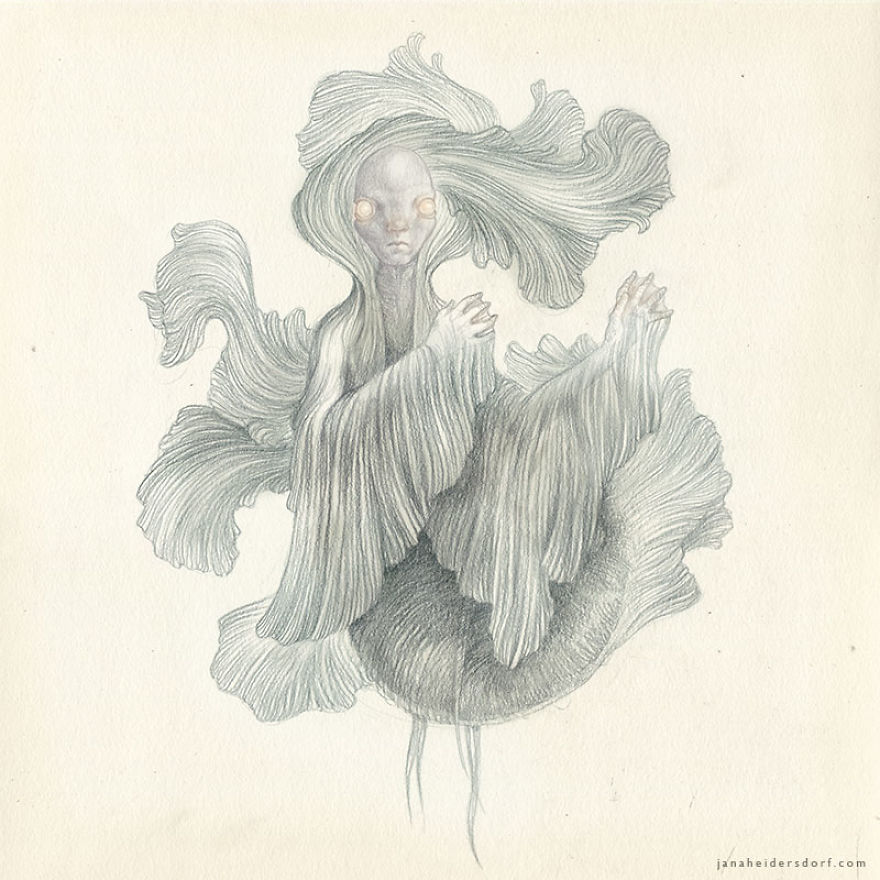 The locations of this species’ sightings vary widely. The appearances never seem to last more than a few seconds and it has yet to be determined whether we are dealing with a single or multiple entities. Her ethereal and fleeting shape has led to the formation of the Siren’s Church, a cult worshipping her as the embodiment of an angel. 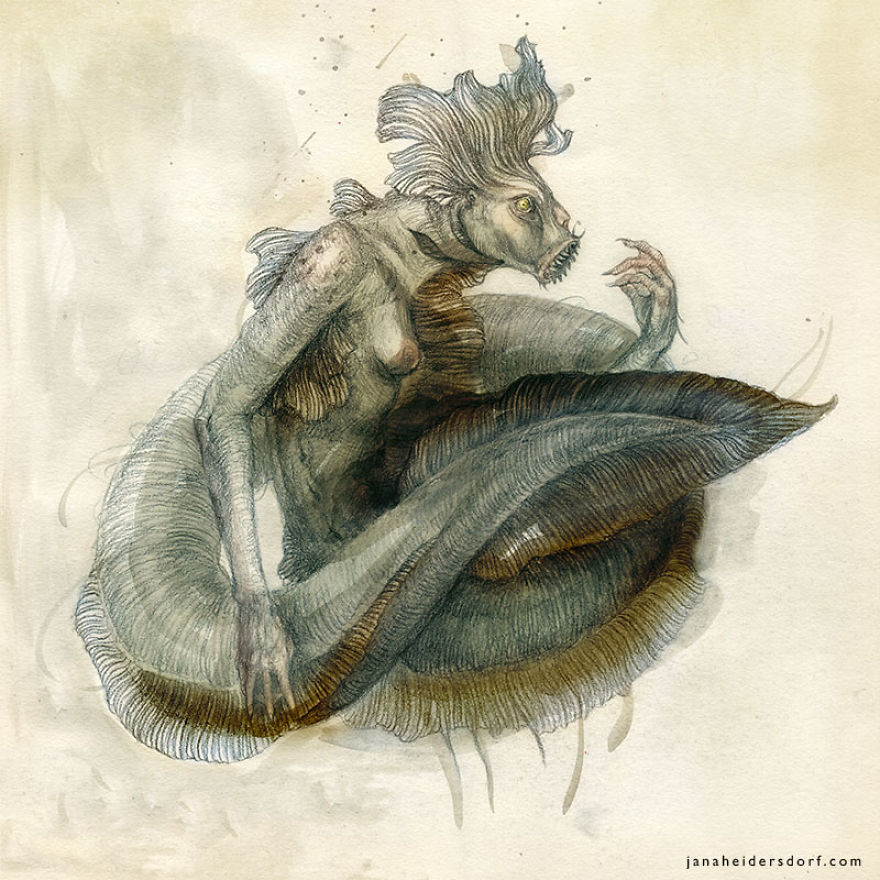 This sea floor dwelling mermaid has developed excellent tools for both feeding and protecting herself. Slime producing glands make her unappealing to predators, while her toothy mouth comes in handy when dismantling and eating her prey. 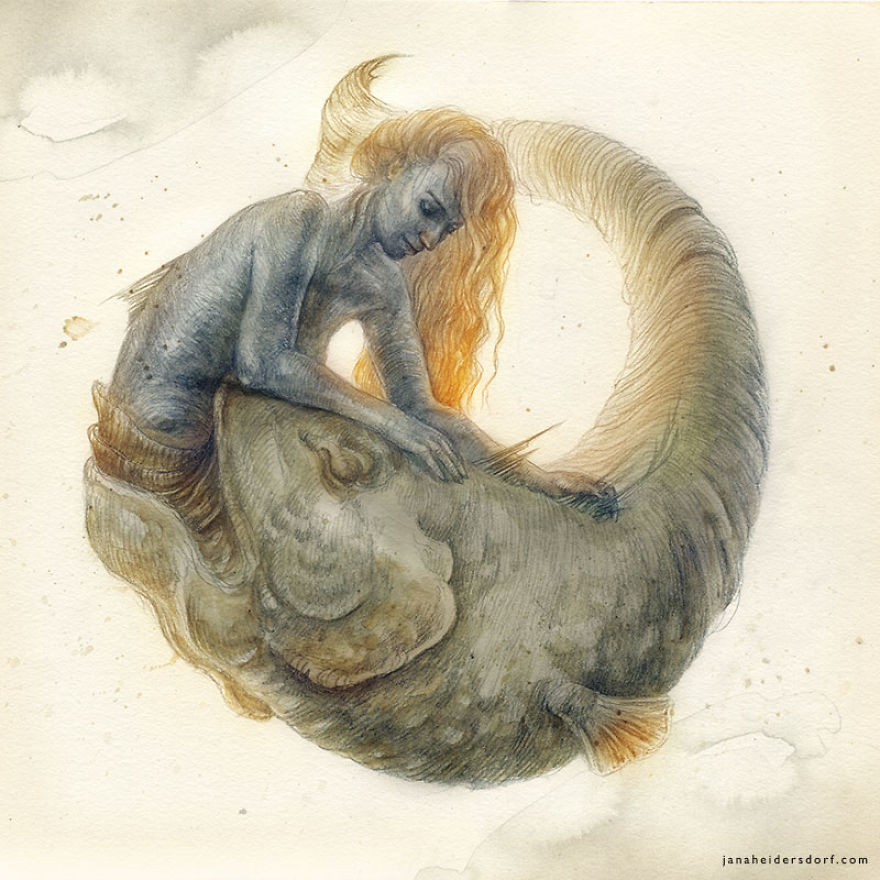 It is highly improbable for this mermaid to survive on her own. At some point she has joined forces with a so far unidentified species of fish, forming what appears to be one creature. Evolution has taken on strange forms and this is surely one of them. 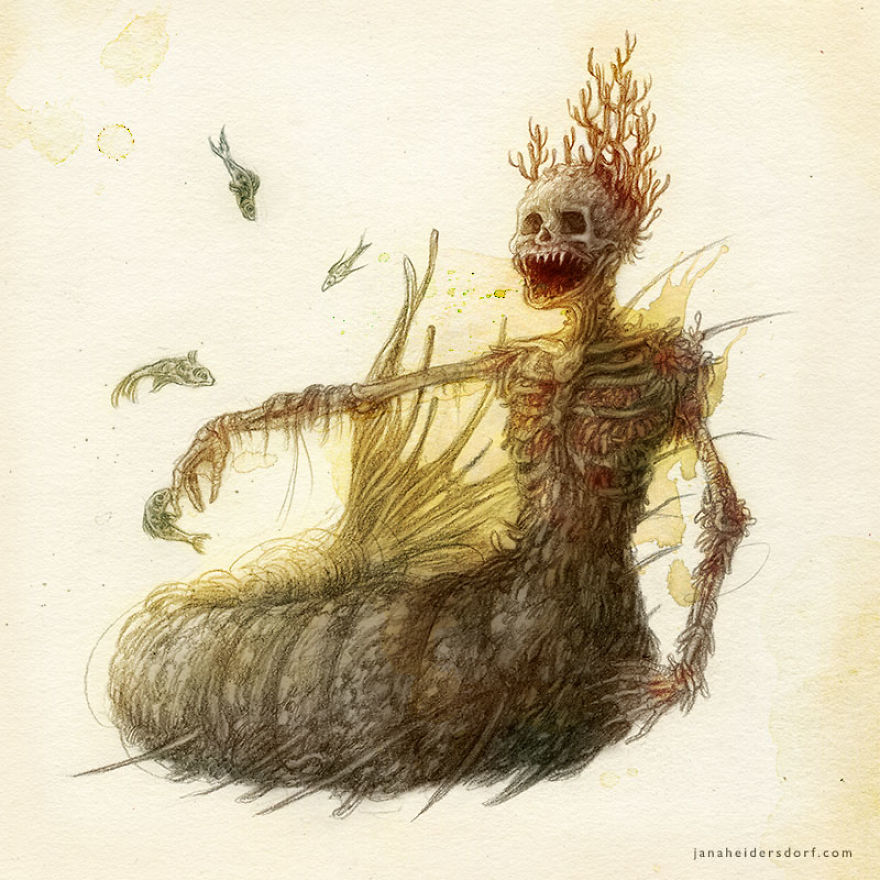 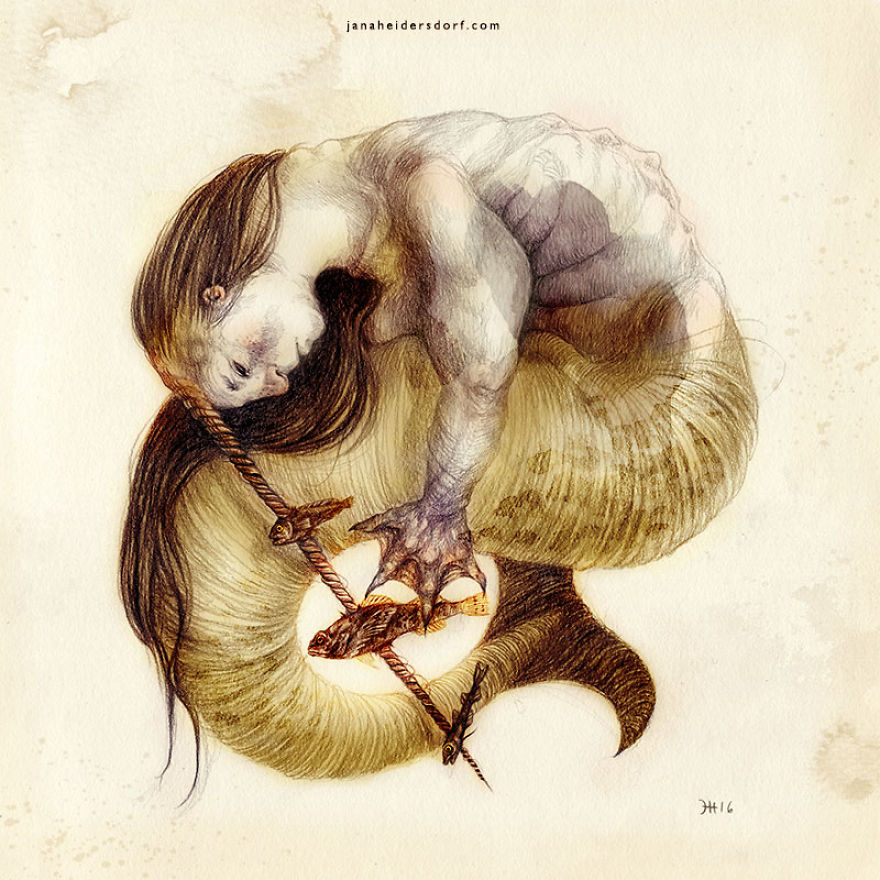 Somewhere between humanity believing in unicorns and denying the existence of narwhals, this shy creature has been roaming the depths of the Arctic Sea for centuries, unnoticed and undisturbed. 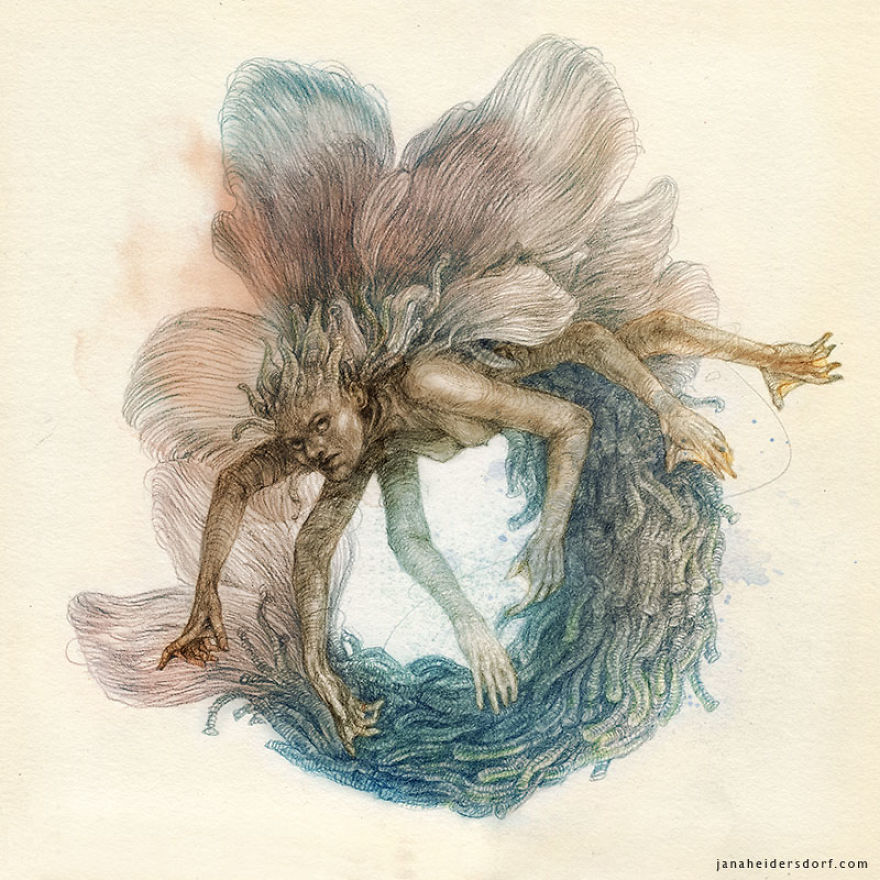 Even though sightings have been rare, several varieties of this colourful species have been spotted mingling with the flora and fauna of the coral reefs close to the Chagos Archipelago. Nolarger than the span of a hand, this mermaid is easily mistaken for a brightly coloured fish or sea anemone. 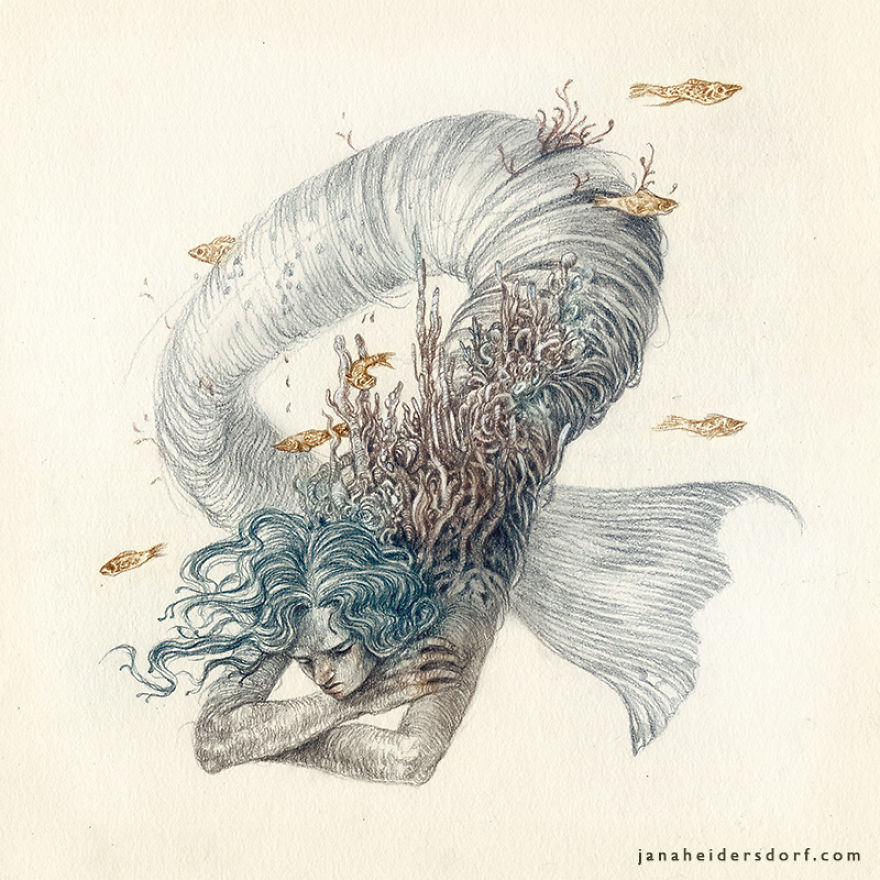 Half plant, half mammal: This mermaid is an eco system in herself. 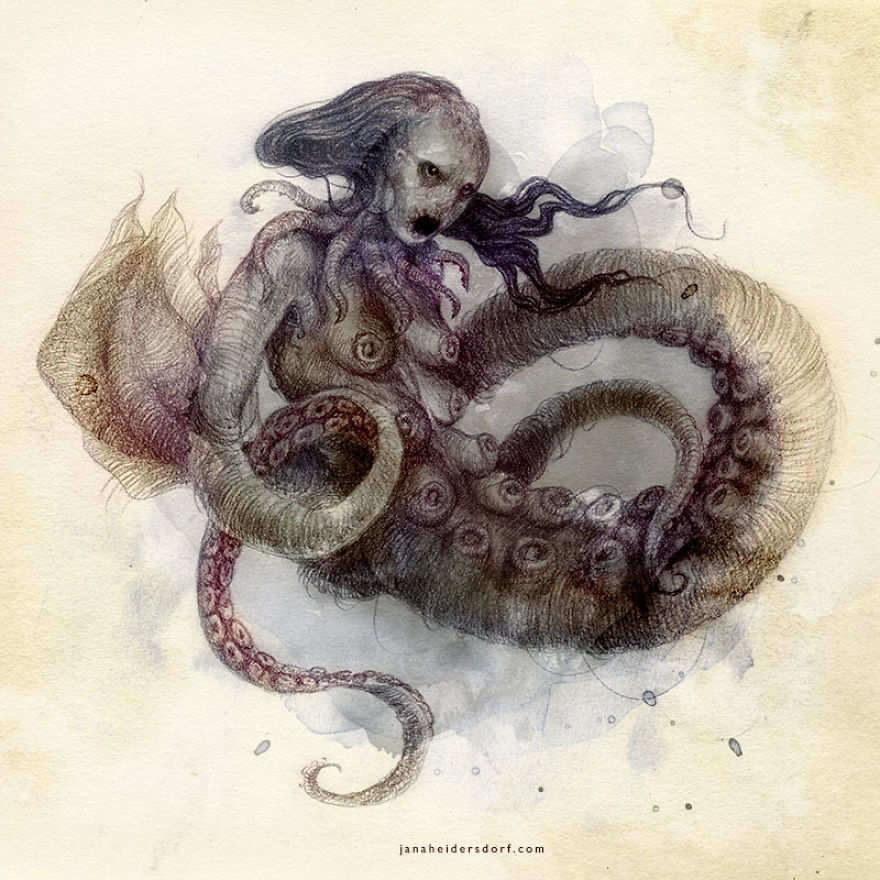 This creature will make use of a heavy fog of ink to protect herself from curious eyes as well as to distract and poison her prey. 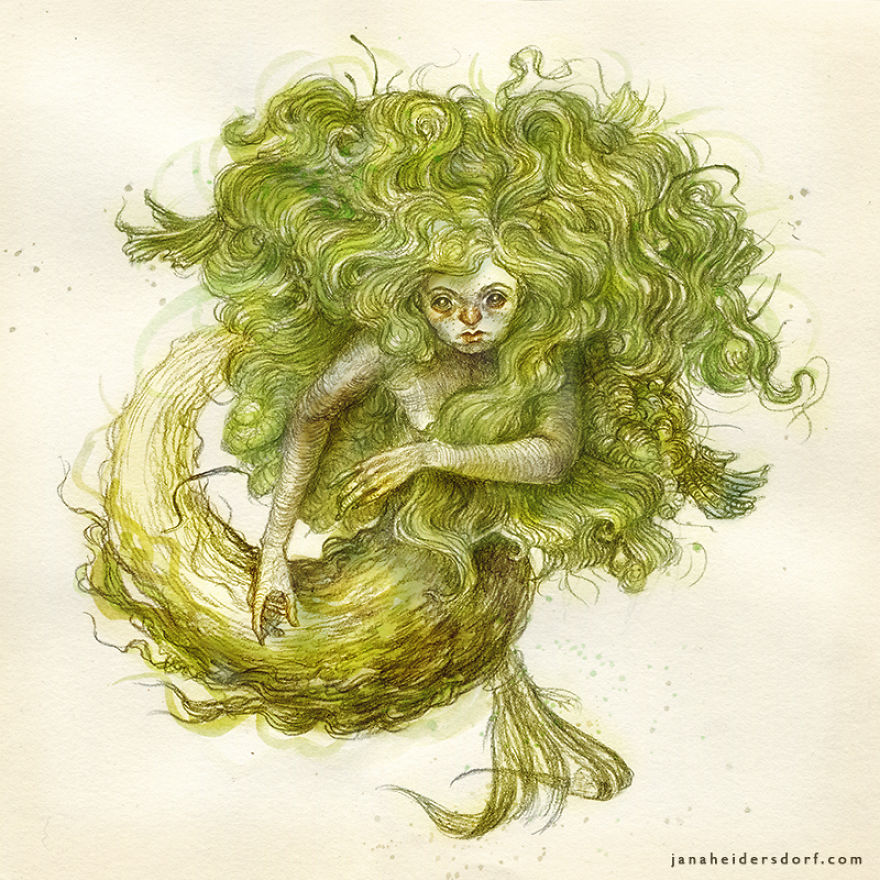 The hair of this mermaid produces a steady amount of oxygen in the water around her while also serving as a filter for small organisms. 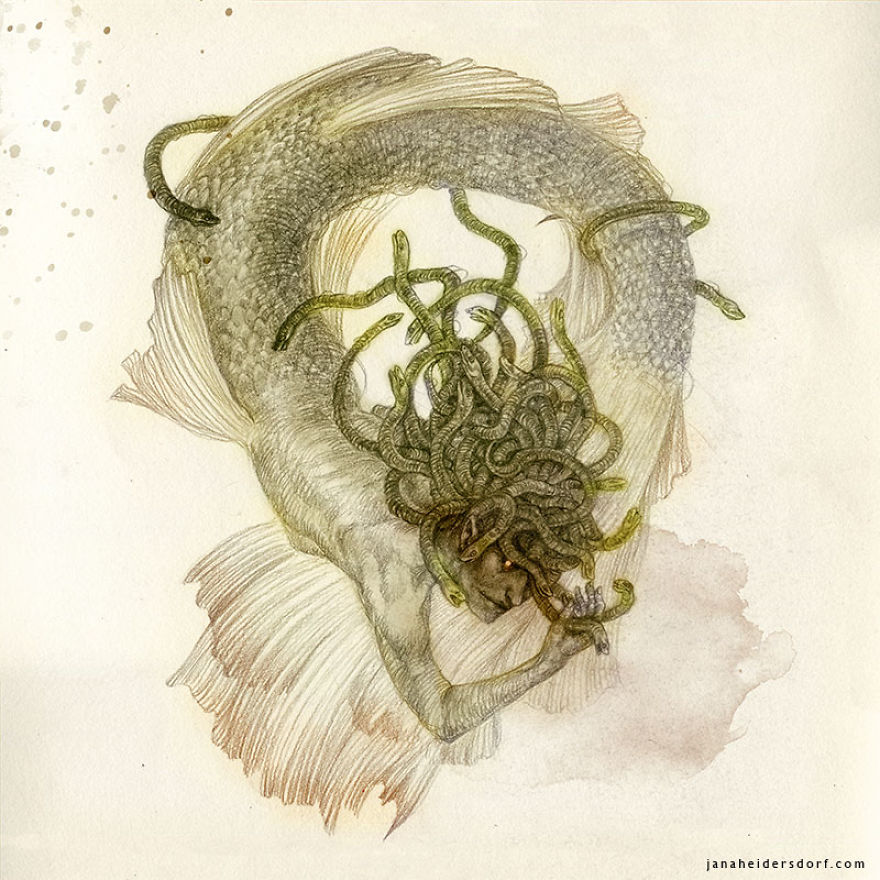 This mermaid seems to have sprung directly from Greek mythology, living in perfect symbiosis with snakelike water creatures that have attached themselves to her head. Sharing prey and predators alike, they are an effective combination. 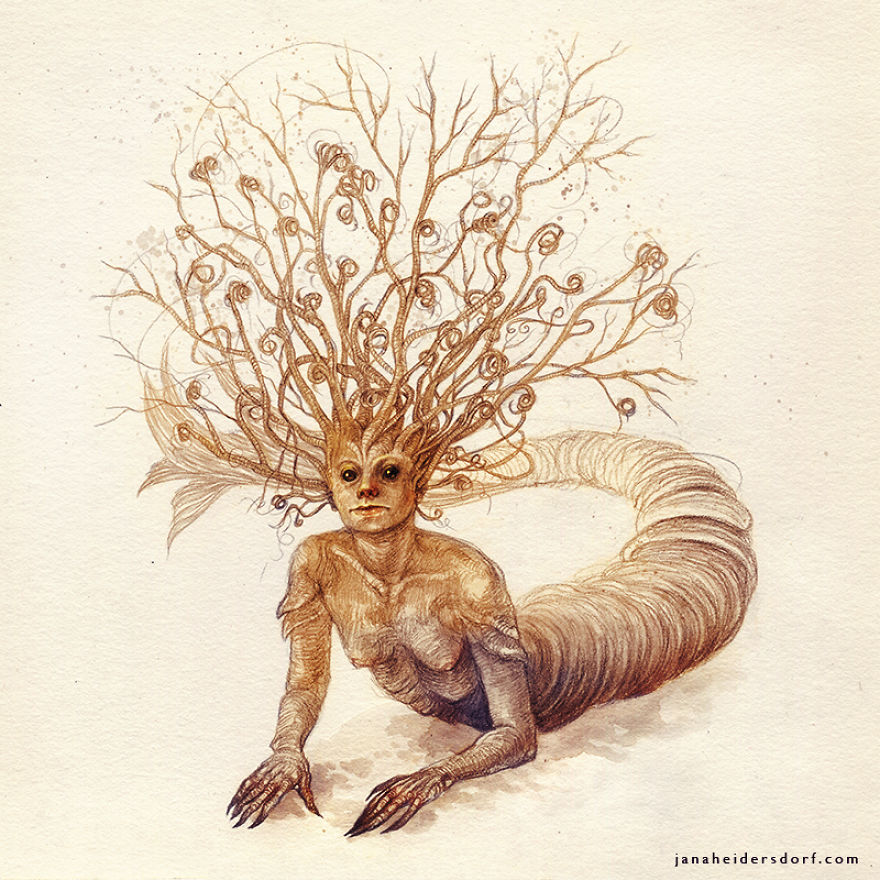 Places where these creatures gather are known as ‘siren forests’ due to this mermaid’s arboreal appearance. Her branches form a vital part of her life support system, supplying her with oxygen and nutritions. The discovery of a living specimen begs the question whether Barnum’s mummified body of a mermaid, long believed to be nothing but a hoax just as the copies which were in circulation after its destruction in the 1860s, may actually have been the real thing. 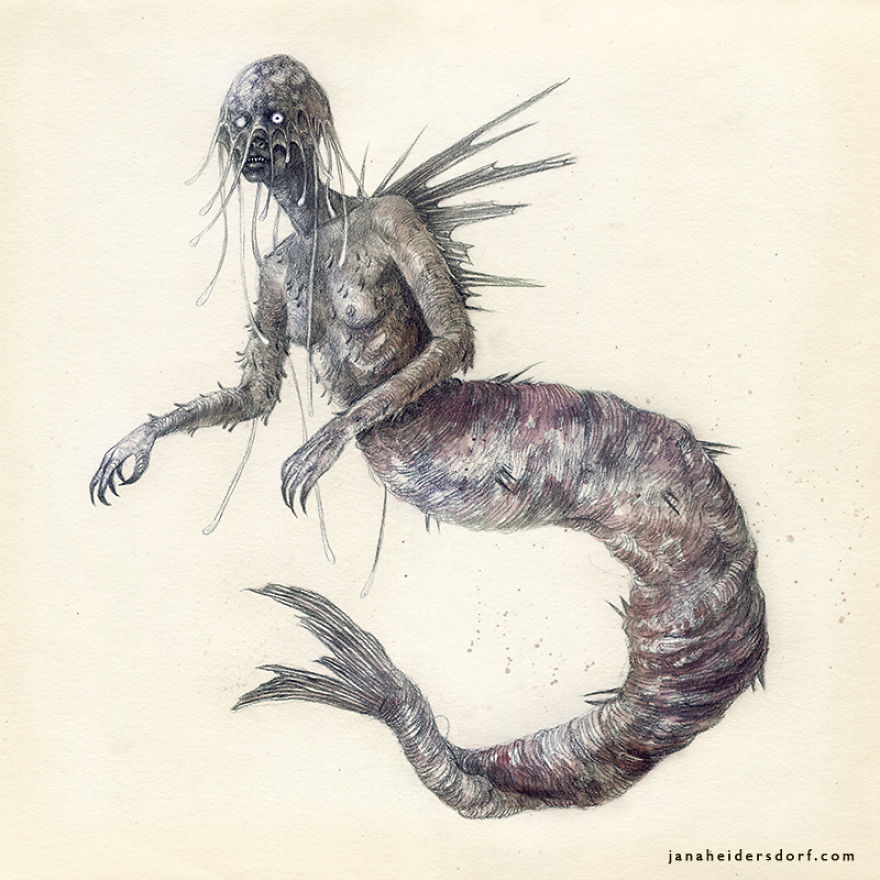 The dark bride of the ocean has a carnivorous approach to life, haunting the deep seas and feeding on smaller lifeforms. 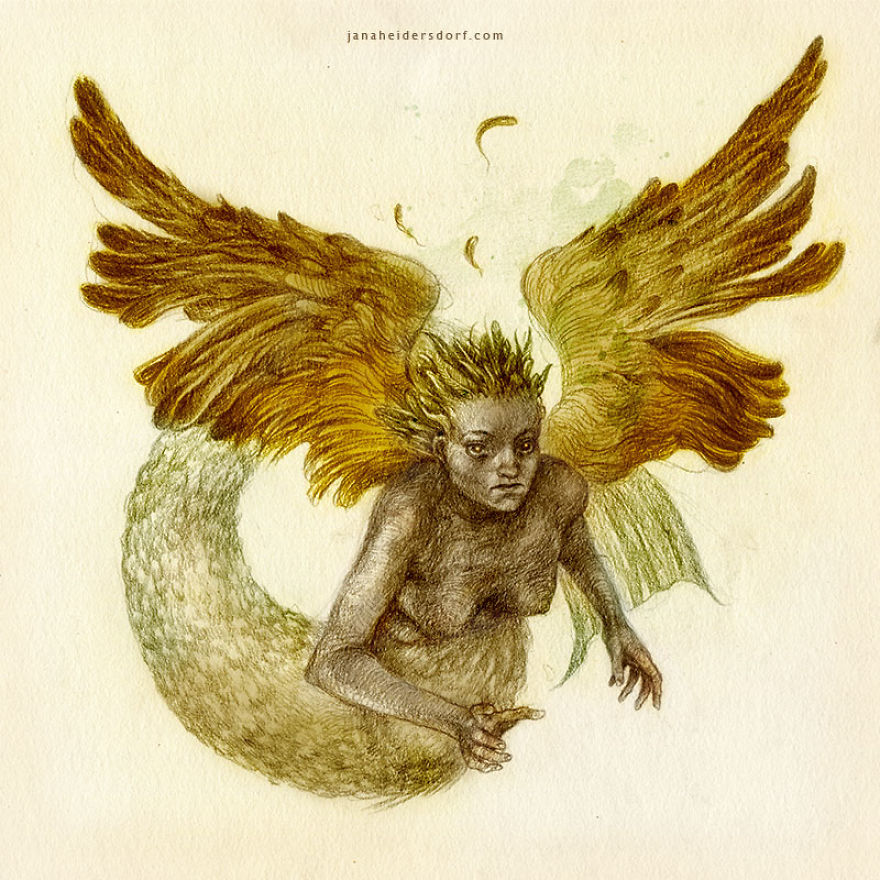 So far it remains questionable whether this sea creature is actually capable of flight. Instead she has been observed to use her wings for both protection and communicational purposes. 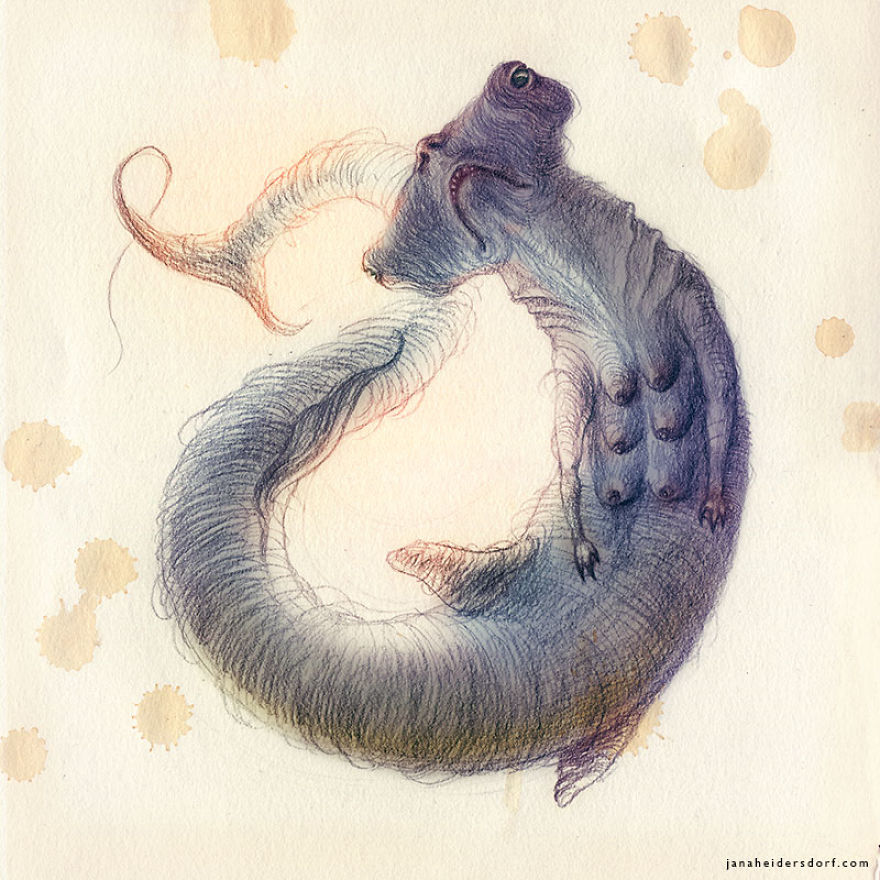 Roaming the depths of the Indian Ocean, this mermaid is a skilled hunter and surprisingly nimble swimmer. Usually eager to avoid humans, she is only a danger to especially yummy stingrays. 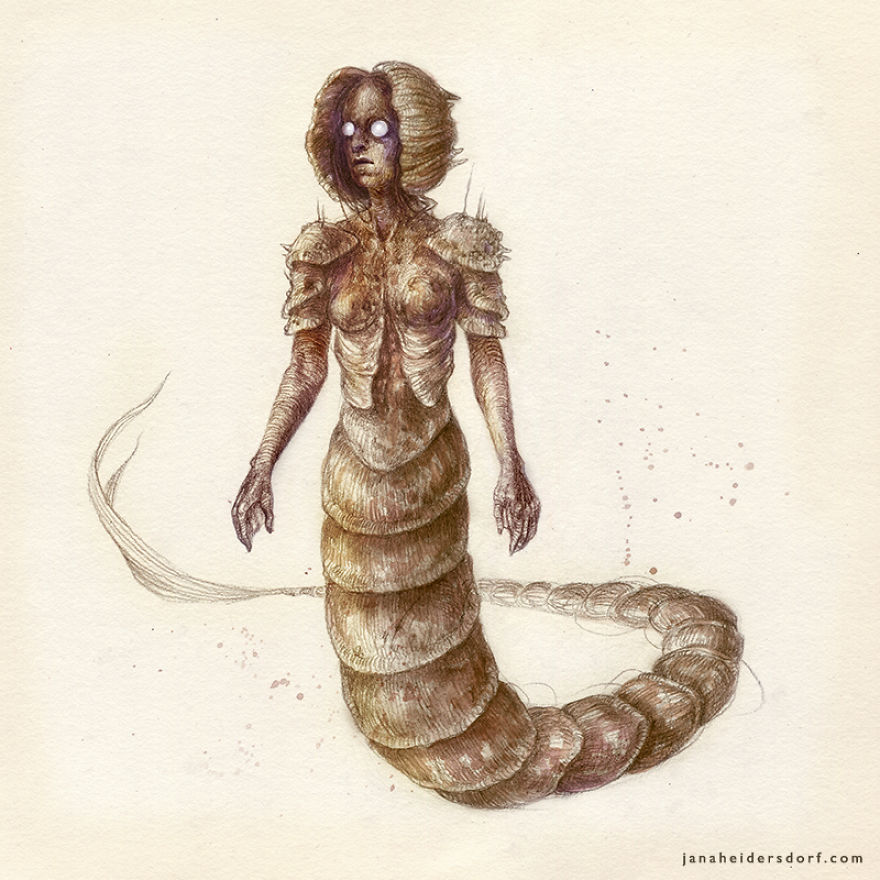 The value of this mermaid’s eyes has only been increasing with the steady decline of her species in recent years. Her shells may have proven to offer solid protection against natural predators, but lack effectivity in the face of human greed. 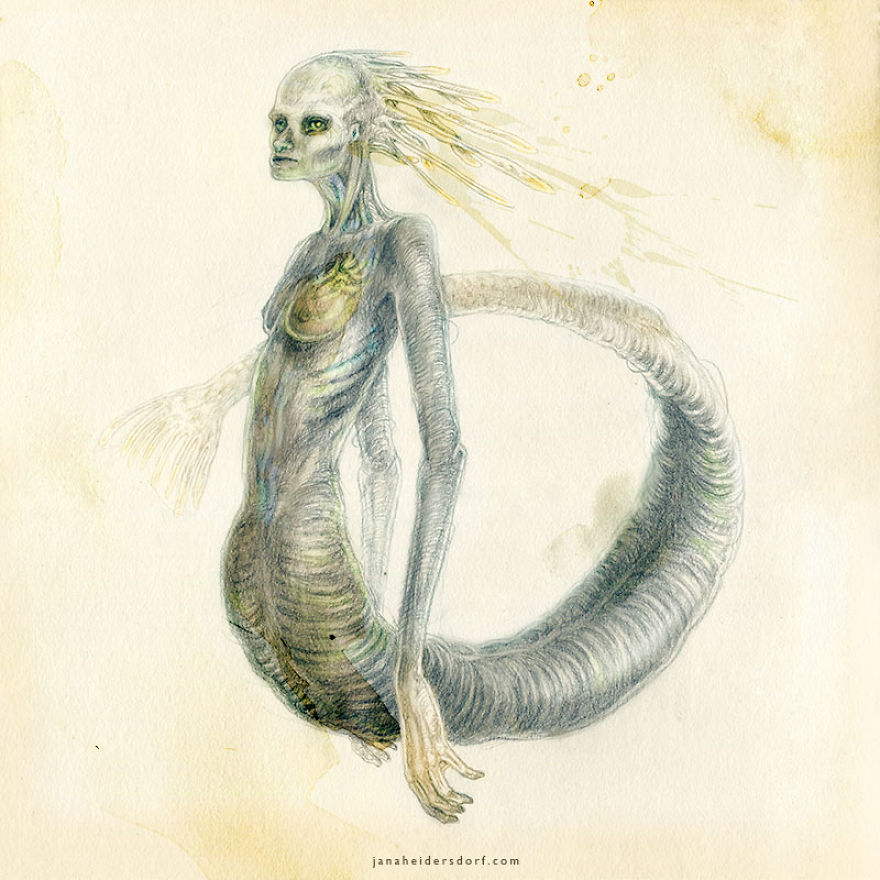 Due to her seemingly crystalline body, this elusive species of mermaid is hard to spot amidst the darkness of the deep sea. 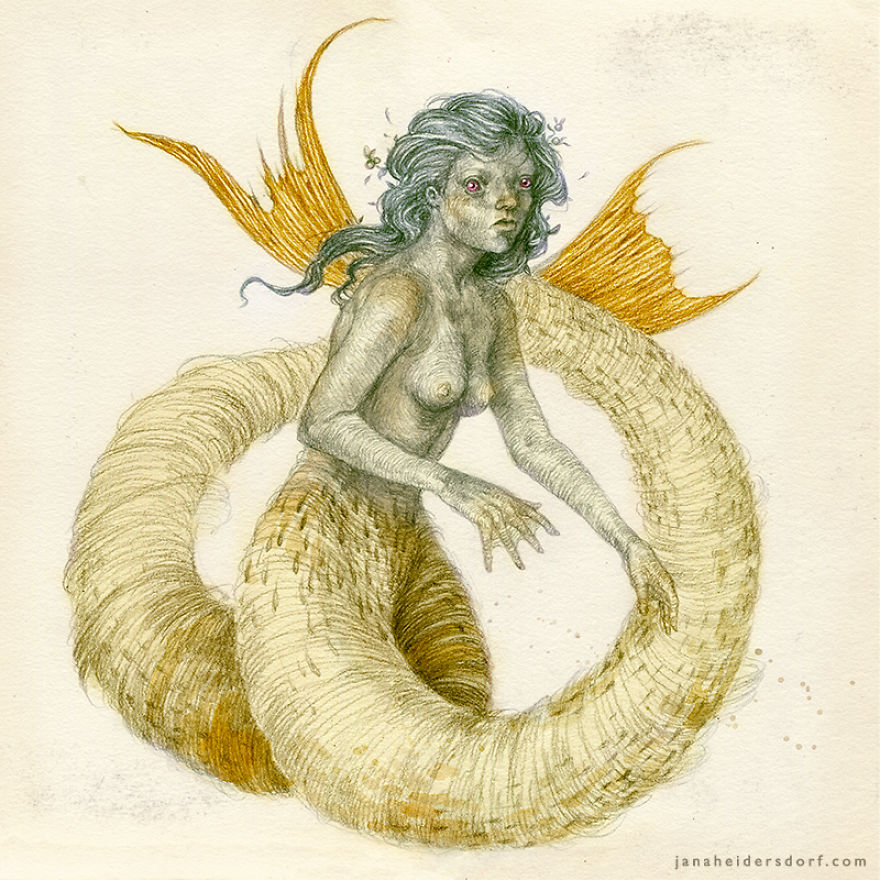 So far this is the only species of mermaid known to have developed two tails. 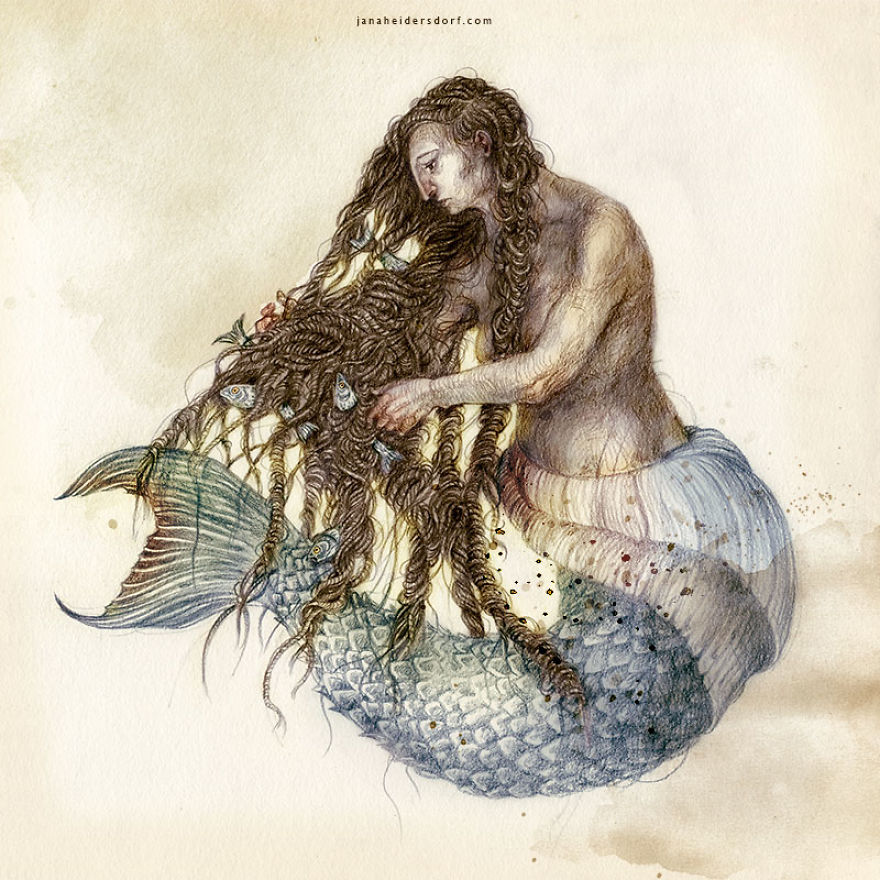 Observed only in this rare Mediterranean variety of mermaid, research still has to disclose whether this curious application of hair tresses is biologically determined or a habit acquired over time due to circumstance. 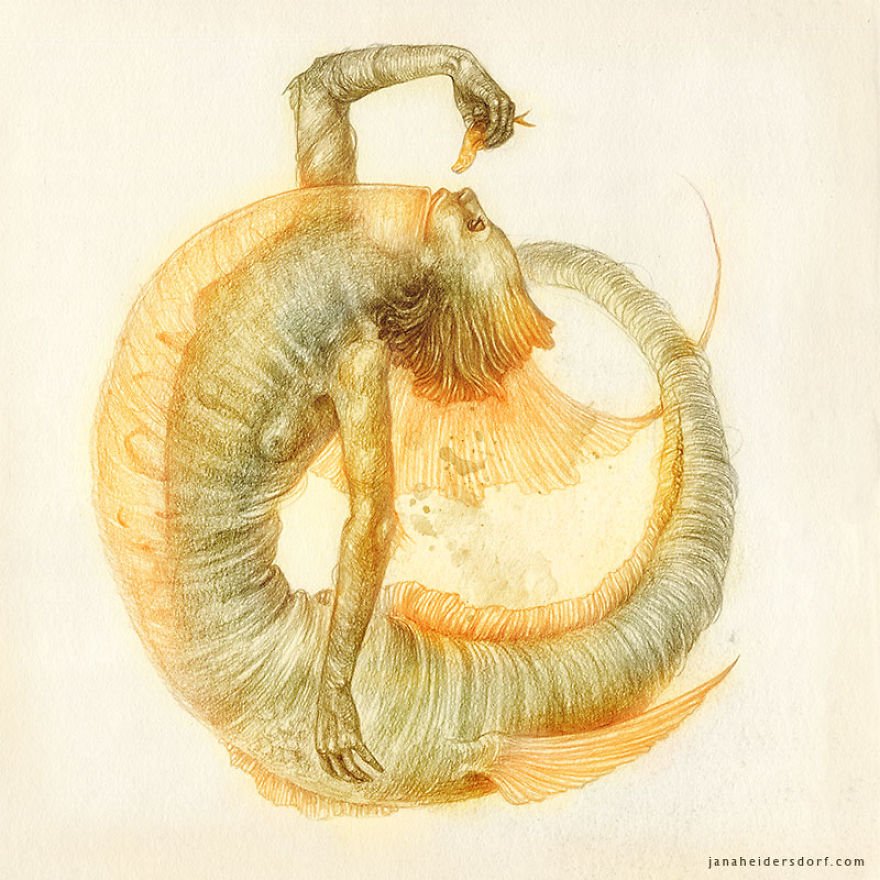 This creature keeps a living supply of smaller fish and marine animals in a balloon like cavity, enabling her to travel long distances regardless of hunting opportunities and food availability. 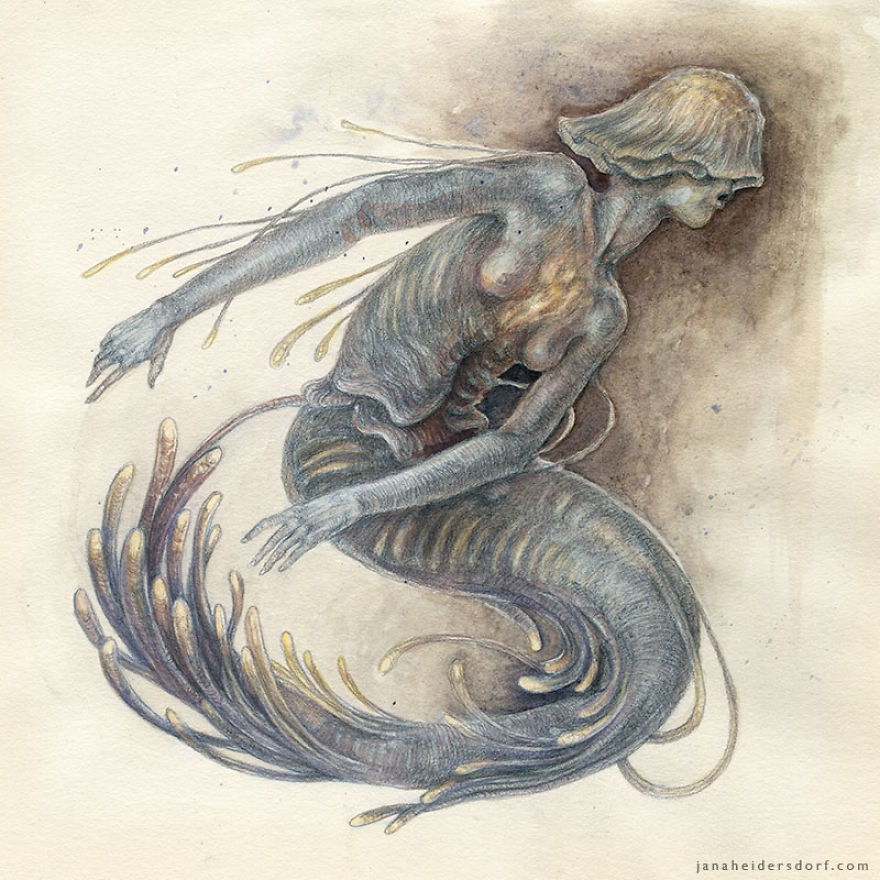 Once in a while this deep sea creature rises to the surface to lure unassuming swimmers astray with its bioluminescent glow. 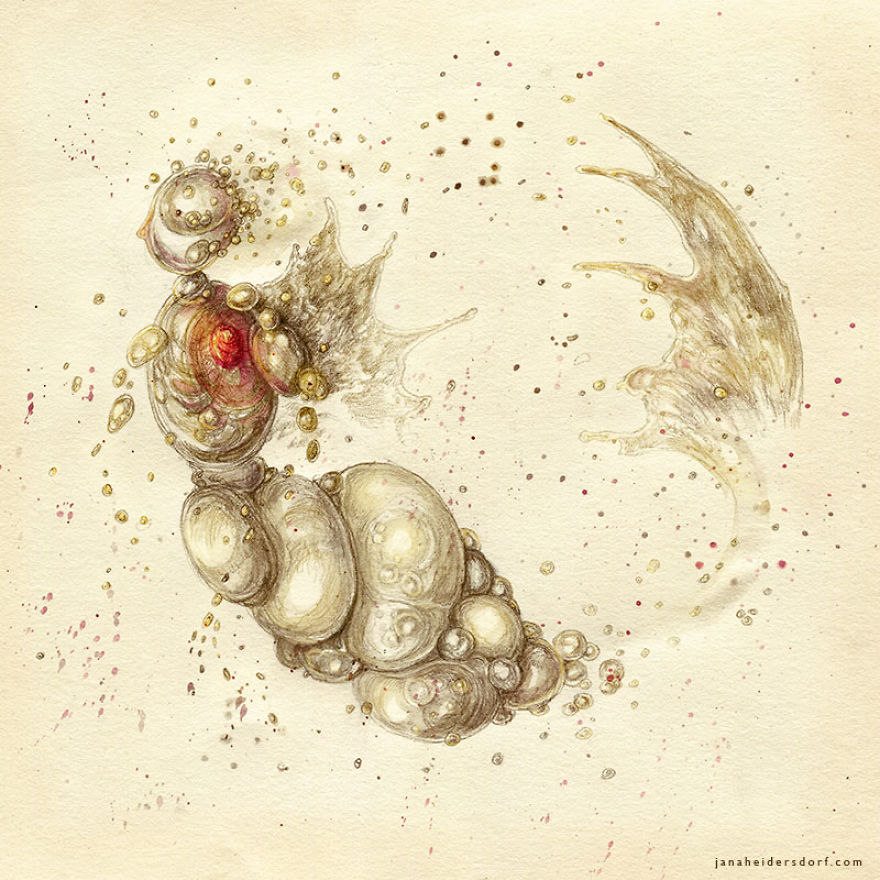 There is no explanation as to what keeps this delicate mermaid alive or even keep its form. In groups of up to 200 individuals these beautiful creatures drift aimlessly through our oceans, leaving behind nothing but questions. 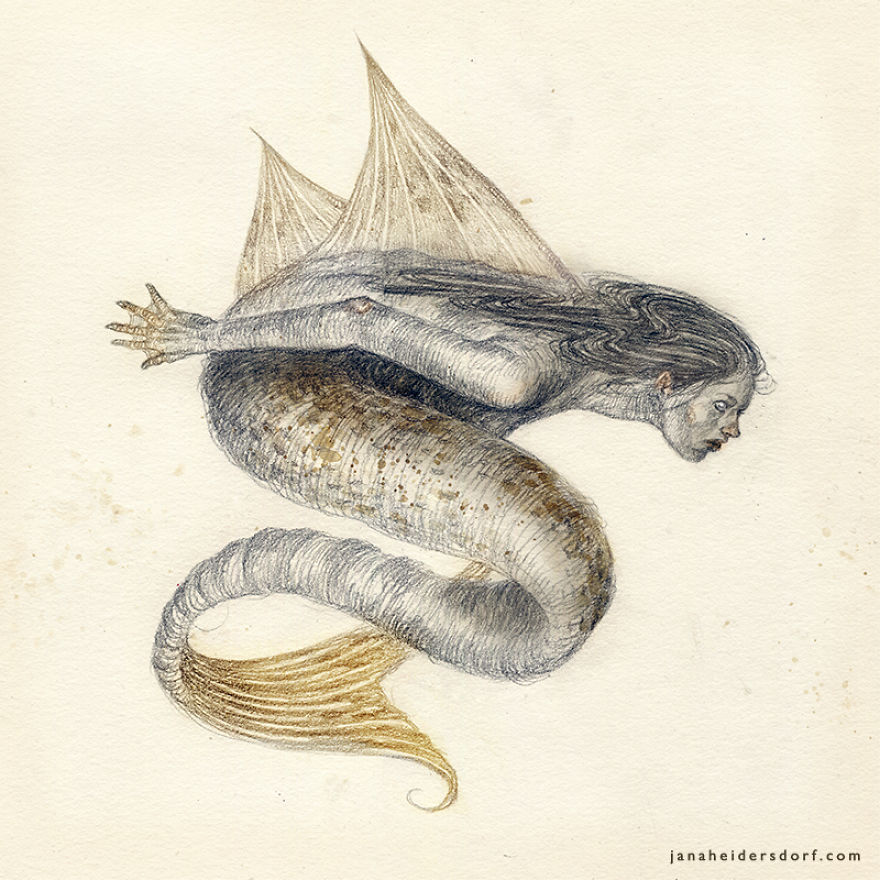 This mermaid’s dorsal fins have developed in a unique way that enables them to catch the wind similarly to a sail. Thus she travels both underwater and adrift on the surface. 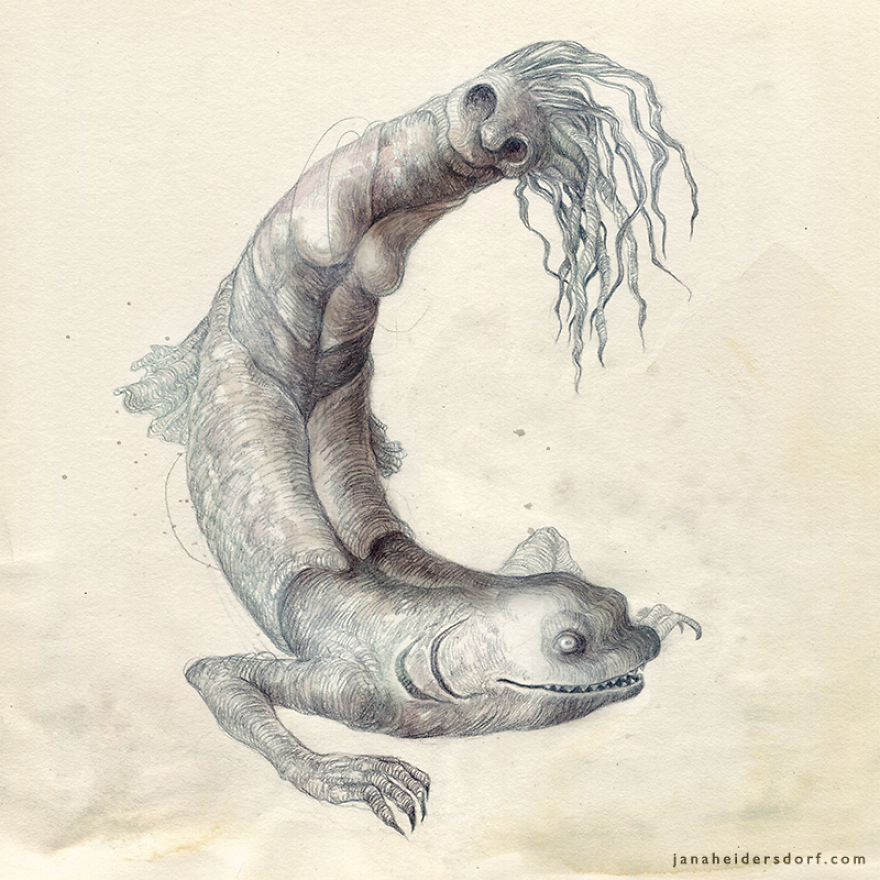 This mermaid has been responsible for the fates of a great many seduced sailors. Her tail is mimicking the shape of a human body to lure in prey. Having succeeded in her ventures she will then proceed to feed on the naive soul trying to mate with her behind. It is unknown why this species seems to have specialized in the consumption of human males. 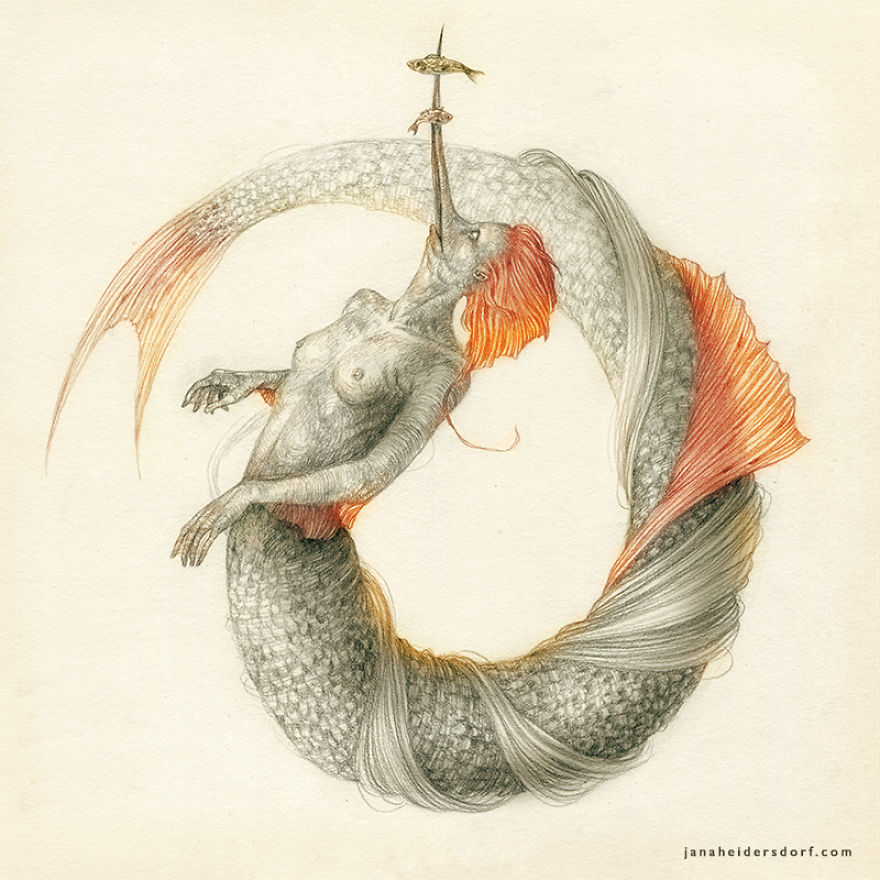 This mermaid knows how to keep unwanted company at nose length. 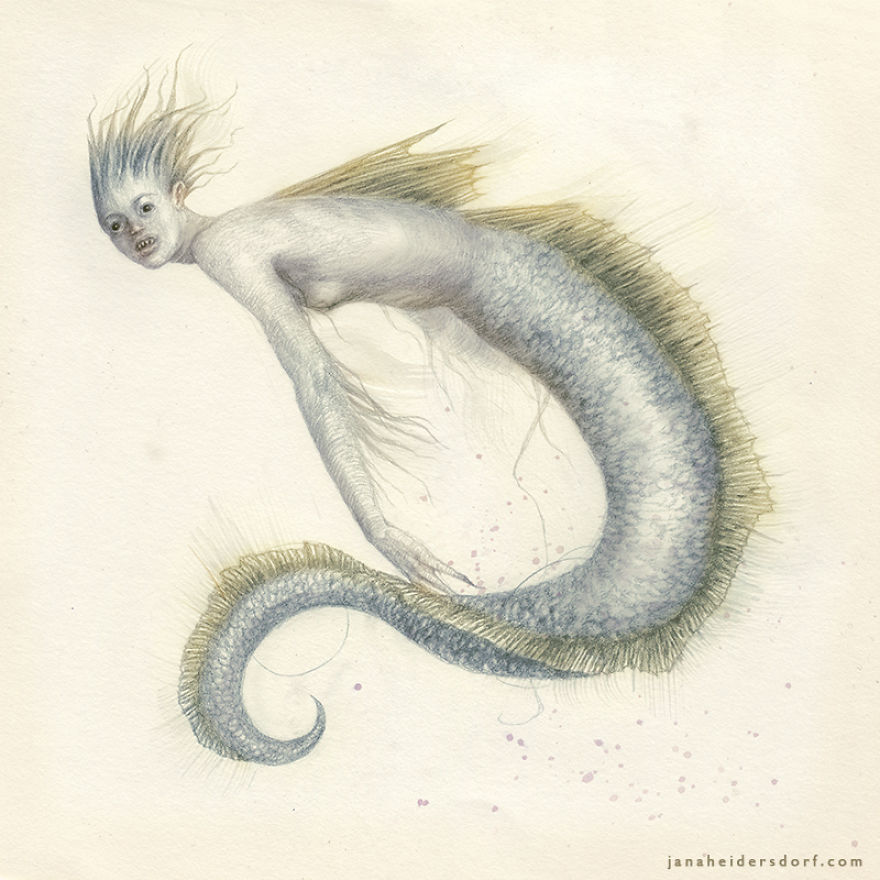 This arctic deep sea mermaid dies shortly after spawning. Her corpse then serves as protection and food for her eggs and hatchlings.