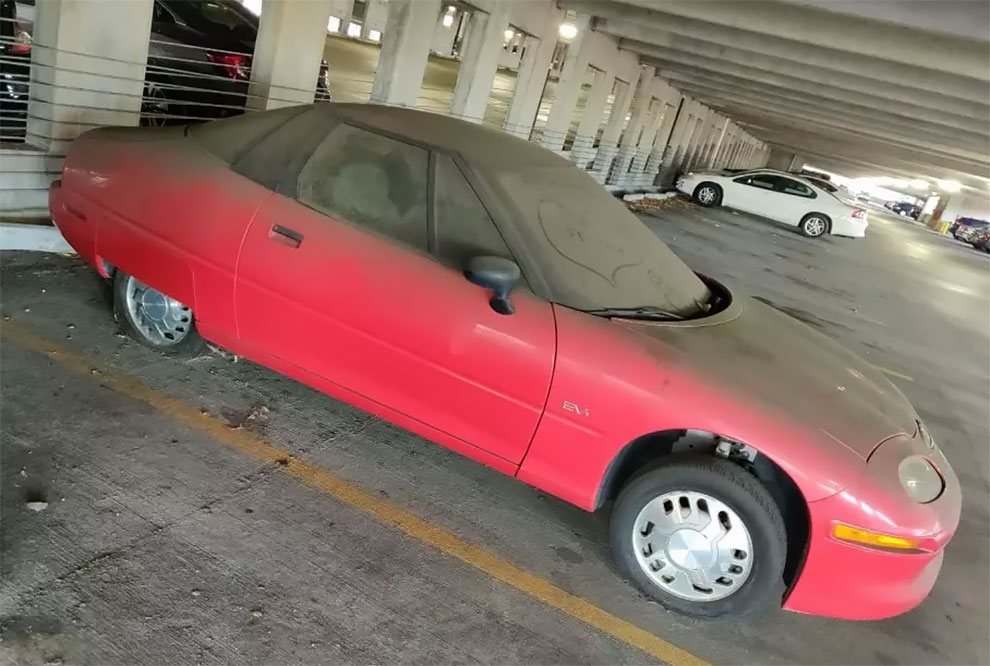 In one of Atlanta’s usual multi-level parking lots, an EV1, developed by General Motors in the late 1990s, was found in 2019. The entire run was later recalled and put under the press, but one car miraculously survived.

The General Motors EV1 was an electric car produced and leased by General Motors from 1996 to 1999. It was the first mass-produced and purpose-designed electric vehicle of the modern era from a major automaker and the first GM car designed to be an electric vehicle from the outset. The EV1 was made available through limited lease-only agreements, initially to residents of the cities of Los Angeles, California, and Phoenix and Tucson, Arizona. 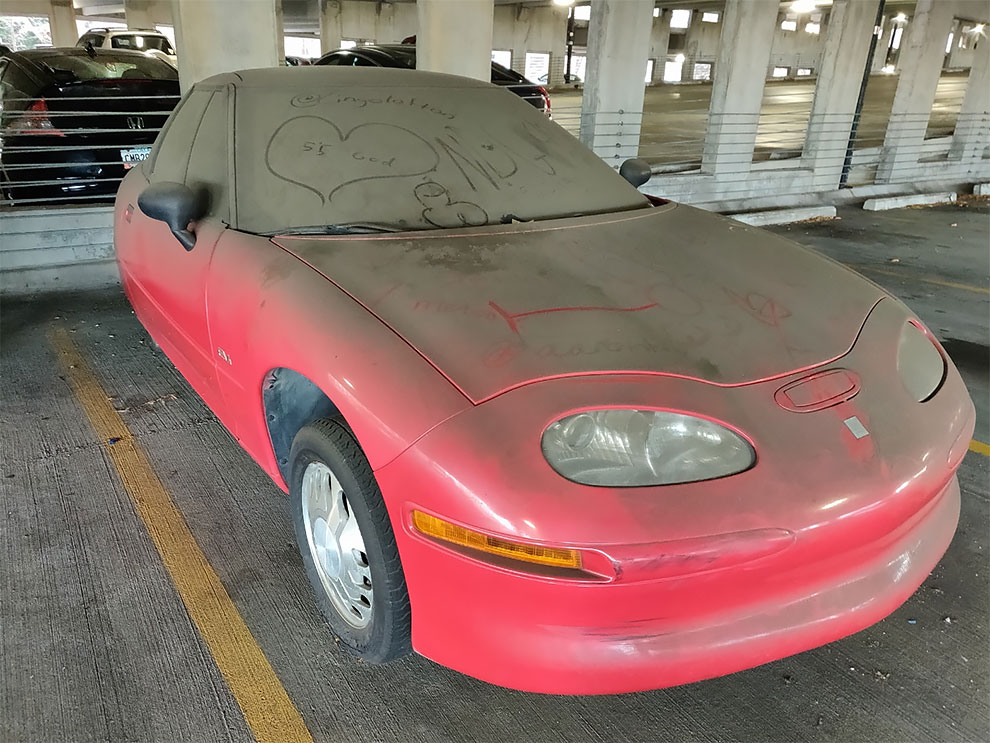 While customer reaction to the EV1 was positive, GM believed that electric cars occupied an unprofitable niche of the automobile market, and ended up crushing most of the cars, regardless of protesting customers.

Furthermore, an alliance of the major automakers litigated the CARB regulation in court, resulting in a slackening of the ZEV stipulation, permitting the companies to produce super-low-emissions vehicles, natural gas vehicles, and hybrid cars in place of pure electrics. The EV1 program was subsequently discontinued in 2002, and all cars on the road were taken back by the company, under the terms of the lease. Lessees were not given the option to purchase their cars from GM, which cited parts, service, and liability regulations.

The majority of the EV1s taken back were crushed, with about 40 delivered to museums and educational institutes with their electric powertrains deactivated, under the agreement that the cars were not to be reactivated and driven on the road. The only intact EV1 was donated to the Smithsonian Institution. General Motors also allegedly gave models to research institutions with EV1s being found in the wild near universities often in states of disrepair. 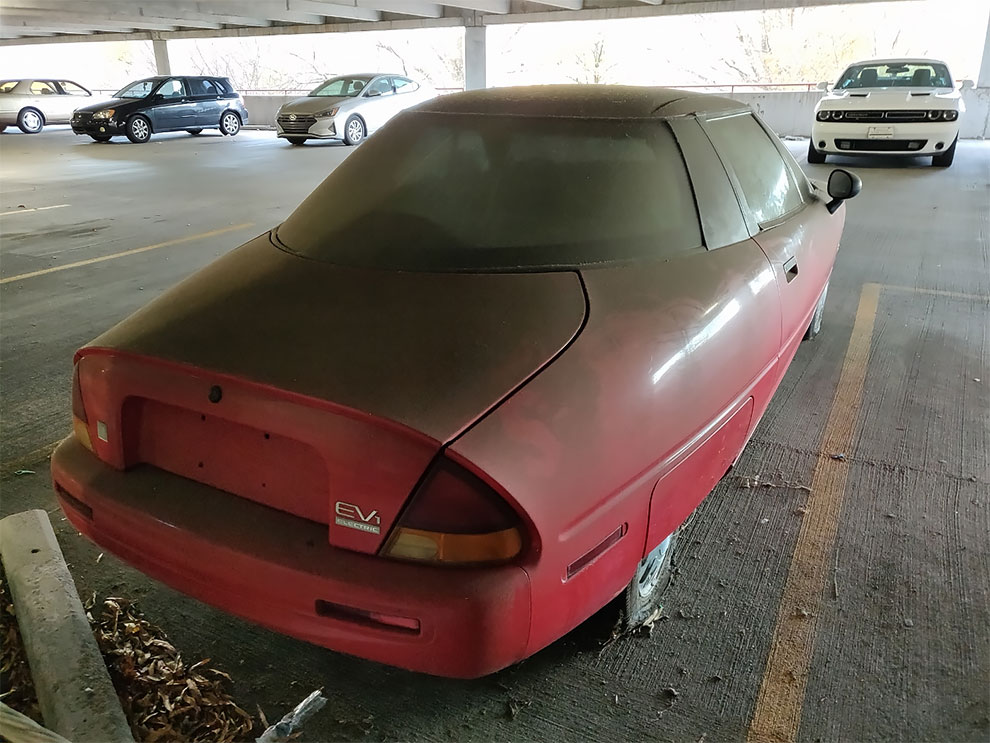 The EV1’s discontinuation remains controversial, with electric car enthusiasts, environmental interest groups and former EV1 lessees accusing GM of self-sabotaging its electric car program to avoid potential losses in spare parts sales (sales forced by government regulations), while also blaming the oil industry for conspiring to keep electric cars off the road. During the discontinuation movie director Francis Ford Coppola hid his EV1 from General Motors and was ultimately able to keep his EV1. As a result of GM taking the cars back as the leases ended and the subsequent destruction of the majority of EV1s, an intact and working EV1 is one of the rarest cars from the 1990s.

This Guy Came Up With A Plan To Turn Any Backyard Into A Beach
Stunning Black and White Photos of Chicago in 1988
Vibrant Vintage Photos of Mexico in 1968
NASA Has Compiled A List Of The Best Air-Cleaning Plants For Your Home
When Modern Love Meets Classic Comic Books
The Brass Era Automobiles: Super Cool Pics Of American People With Their Cars From The 1900s And Early 1910s
Apple Store Opening In Bologna, Italy
The Proliferation Of Nostalgia-Inducing LEGO Sets Indicates That They're Far More Than Just A Child's Toy
Humanoid Robots at the National Museum of Emerging Science and Technology
IdealPark Lets You Hide Your Car Underground Like James Bond
Gallery Of 68 Competitive Designs For The Great Tower For London, 1890
"We Were Once Alive": 100-Year-Old Portraits from Rural Sweden by John Alinder
Stunning Black and White Celebrity Photographs Taken by Dennis Hopper in the 1960s
Steve Jobs Showing Andy Warhol How To Use a Macintosh Computer that Sean Lennon Received for His 9th Birthday in 1984
Beautiful Colorized Photos of a Young Queen Elizabeth II From the 1930s and 1940s
Homes of the Future: A Look Back at Charles Schridde’s Stunning ‘60s Ads For Motorola
There Was Sex In The USSR: Soviet Car Advertising From The Past
Turkish Designer Envisions Futuristic BMW Titan Motorcycle
Antique Tractor Auction
Vintage Photographs of the Skiway Sky Bus Lift Used on Mt. Hood, Oregon From the 1950s
Introducing Foodini: A 3D Food Printer
Unique. Electric. Aesthetic. Minimalistic. An American Company Has Created a Very Beautiful Retro-Style Electric Car
50 Obsolete Things To Prove How Much The World Has Moved On And Changed
"Terminal City": Extraordinary Photos Of Vancouver 1972-1982
electric, EV1, General Motors, retro