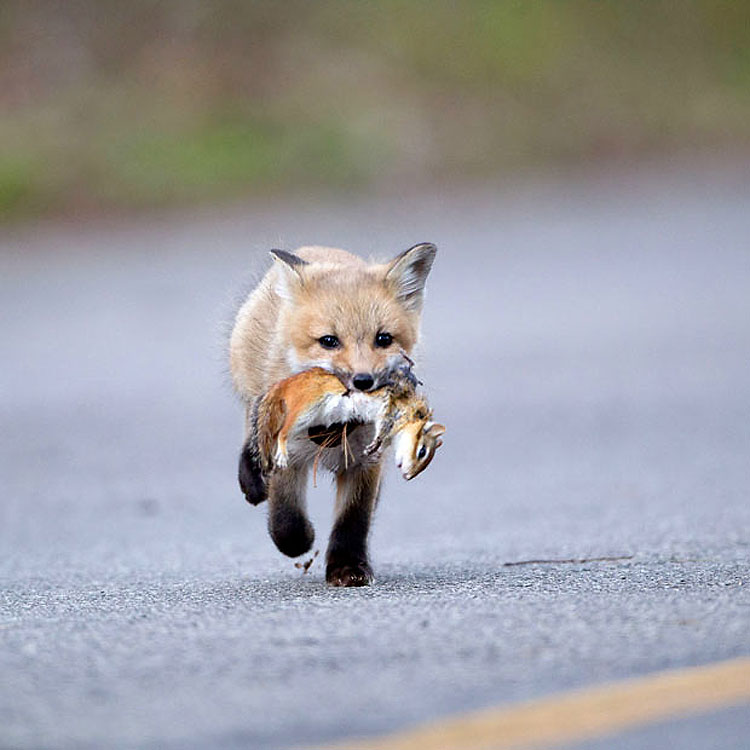 While it’s mother is hunting in the woods, this cub is searching for her. This wildlife image show a fox pup steal a dead chipmunk from his mother just after she had returned from hunting.

The greedy pup even ran off to make sure he could keep the prey for himself and didn’t have to share with his siblings. The images were taken by wildlife photographer Richard Dumoulin in a national park in Quebec, Canada.

The mother red fox returned from hunting with a chipmunk, a mole and a sausage to feed her cubs, however one of her children was obviously starving as the cheeky pup jumped on the tasty treat and set off down the road to eat it himself.

“It was obvious he wanted the biggest catch and didn’t give his brothers and sisters a look in,” said Richard.

The mother fox made no attempt to chase after her naughty pup. (Richard Dumoulin/Rex Features)

A Photographer Is Using A Unique Method To Show The Shift From Day To Night Across Famous Cities In Spectacular Images
The America We Lost: Fascinating Found Photos Show How Life of the US Looked Like in the 1960s
Artist Erkin Demir Creates Superb Surreal Double Exposure Portraits
Incredible Storm Chaser Pictures
Photographer Recreates Iconic Photos With John Malkovich As The Main Subject
Coral Reefs: Secret Cities of the Sea
XCIA: Street Illegal
French Photographer Visited Chernobyl, And The Captivating Photos Show Just How Suddenly Time Stopped In Its Tracks After The Disaster
Life Before The Taliban: Photos Show Afghanistan Before It Plunged Into Hell
Dad Transforms His Adorable 4-Month-Old Son Into A Real-Life Elf On The Shelf
"Terminal City": Extraordinary Photos Of Vancouver 1972-1982
Members Of Magog MC By John Crawford
Photo of the Day: Where Are You, Humans?
Parent Of An Autistic Son Who Hates Being In Photos T-Rex Solution Isn't Just Brilliant, It's Hilarious
20 Strange & Unusual Pics From The Early 20th Century That You May No Longer See Today
Girls and Boys With Their Color-Coded Things
Winning Images of The Architectural Category from The International Photography Awards 2020
Kyoto Photographer Shows the Beauty of Autumn Through Gorgeous Foliage Photos
2013 National Geographic Photo Contest, Part 1: “Nature”, Weeks 1-3
Photo of the Day: Jiff The Dracula
Beautiful Retro Photos Show Unique Women’s Fashion Styles in Hong Kong During the 1990s
This Photographer Captured The Life Of A Ping Pong Table For 5 Years
Funny Vintage Photos That Captured At Just the Right Time And The Right Angle
New Wave Downtown Fashion by Edo Bertoglio
Photo of the Day: The Shock Wave
Here’s What Marijuana Looks Like Under The Microscope
The Line - Aftermath
Photo Series Reveals How Our Facial Expressions Change When We Get Undressed
"A Journey Guided By The Elements:" Surrealistic Reality In Photographs By Benjamin Everett
Photographer Yu Captures Weird And Majestic Architecture Of China