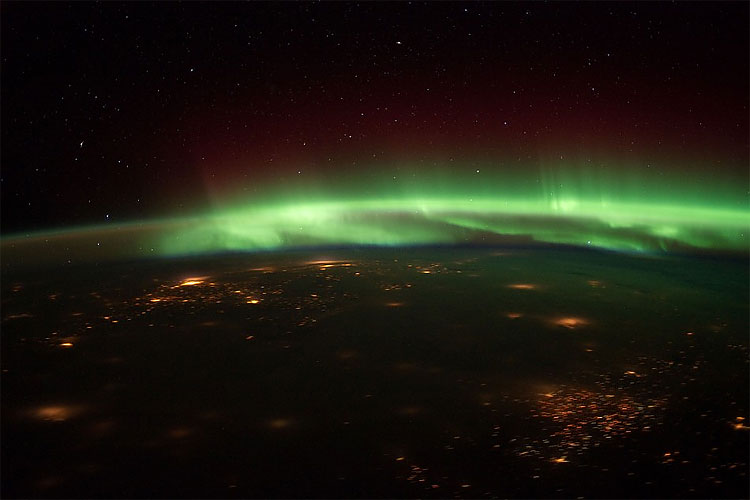 The aurora borealis steals the show in this nighttime photograph shot from the International Space Station as the orbital outpost flew over the Midwest recently. Cloud cover makes it difficult to identify the cities that are within the captured area. The spacecraft was above south-central Nebraska when the photo was taken. The angle of the look is northward to northeastward. (ISS030-E-061267 http://eol.jsc.nasa.gov/) 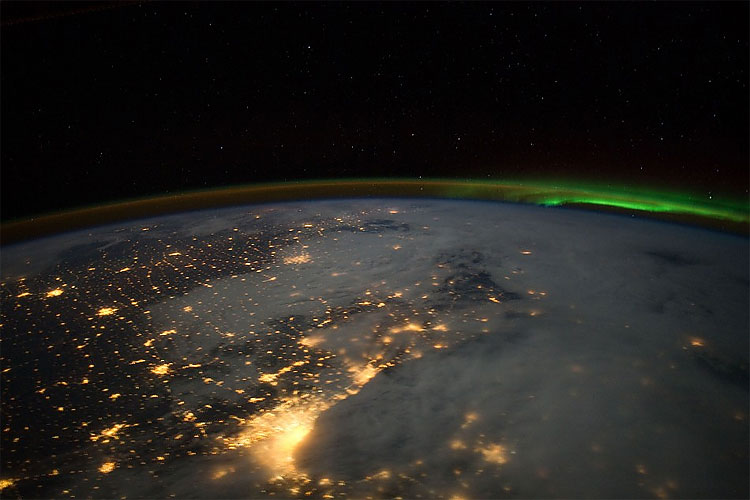 This nighttime image, photographed by one of the members of the Expedition 30 crew in the International Space Station, features the greater Chicago metropolitan area strung along the southwestern shore of Lake Michigan. The region is partially covered by clouds, probably low-hanging, or even fog. Meteorologists say there is a fine line between low thin clouds and fog. Fog is uncommon in the Great Lakes region this time of the year (because it is usually too windy), but this has been an exceptionally mild winter. The faint gold line of airglow — caused by ultraviolet radiation exciting the gas molecules in the upper atmosphere — parallels the horizon or Earth limb. Minor auroral activity (borealis) is visible at upper right. (ISS030-E-062540 http://eol.jsc.nasa.gov/) 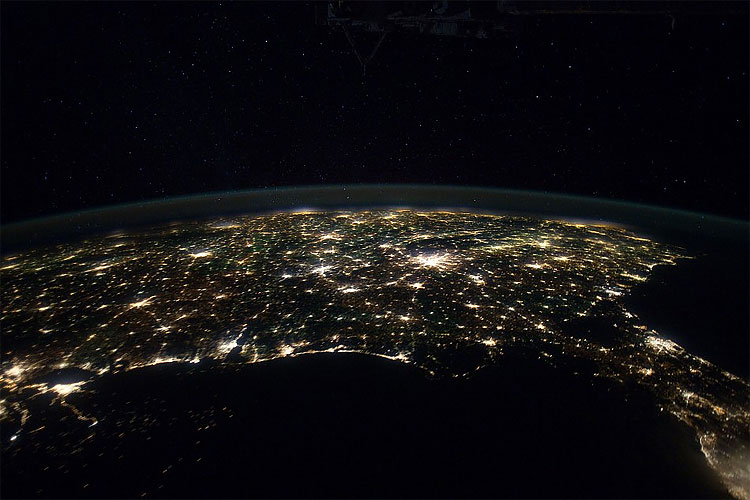 This northward-looking nighttime panorama of much of the land mass of the eastern two-thirds of the contiguous United States was photographed by one of the Expedition 30 crew members aboard the International Space Station as it was moving over the Gulf of Mexico on Jan. 29. In this series, the 24-mm images cover the area from the Atlantic Coast (right) to the eastern edge of the southwestern states and the western Gulf of Mexico. Most of the Florida peninsula is easily recognizable at the right edge. The lights of dozens of large metropolitan areas are visible. (ISS030-E-055547 http://eol.jsc.nasa.gov/) 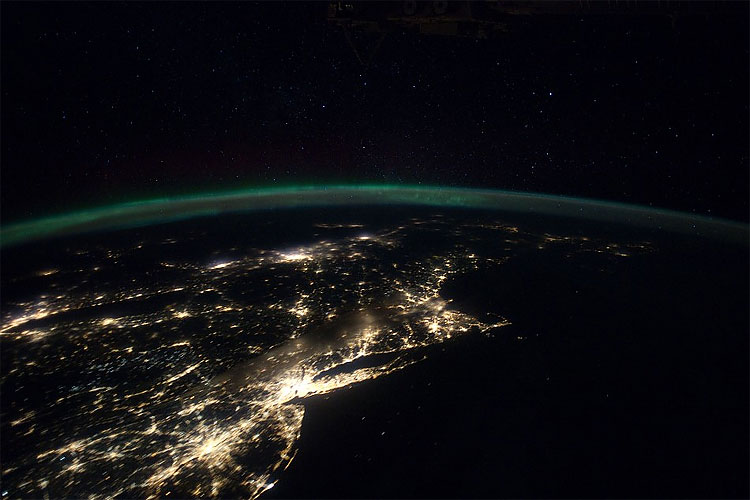 A panorama of much of the East Coast, photographed by one of the Expedition 30 crew members aboard the International Space Station, provides a look generally northeastward: Philadelphia-New York City-Boston corridor (bottom, center); western Lake Ontario shoreline with Toronto (left edge); Montreal (near center). An optical illusion in the photo makes the atmospheric limb and light activity from the aurora borealis appear “intertwined.” (ISS030-E-055791 http://eol.jsc.nasa.gov/) 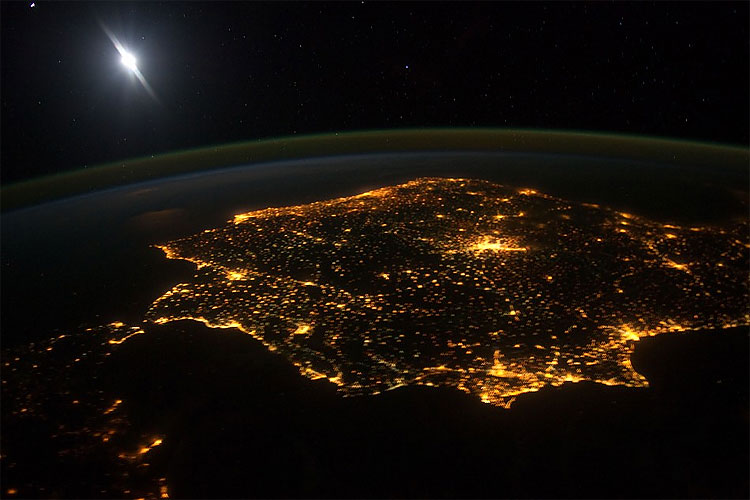 The city lights of Madrid (right of center) stand out in this photograph from the International Space Station. Recorded by one of the Expedition 30 crew members, the view shows almost the entire Iberian Peninsula (both Spain and Portugal) with the Strait of Gibraltar and Morocco appearing at lower left. What is thought to be a blur of the moon appears in upper left corner. The faint gold or brownish line of airglow — caused by ultraviolet radiation exciting the gas molecules in the upper atmosphere — parallels the horizon or Earth limb. (ISS030-E-060478 http://eol.jsc.nasa.gov/) 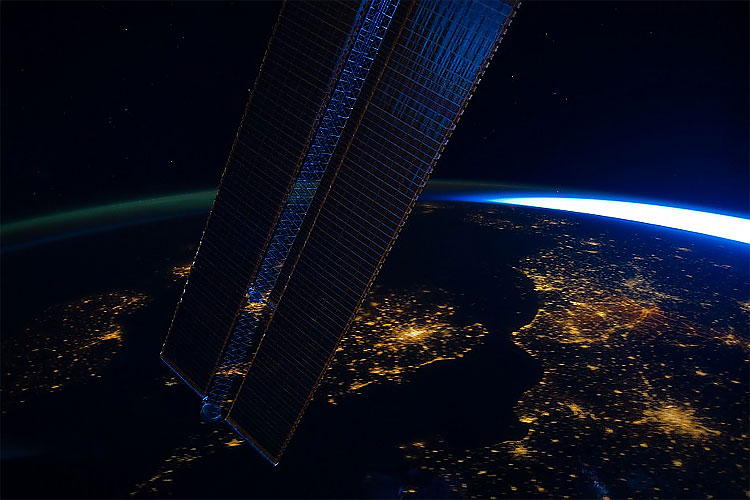 A number of European nations appear in this nighttime image photographed from the International Space Station. The scene, captured by one of the Expedition 30 crew members, shows the British Isles (left, partially obstructed by one of the space station’s solar array panels) with London just right of bottom center; the English Channel, which is dark; Paris (lower right corner); and the Netherlands (right side). The greenish airglow is fairly uniform and minor until it transitions to daybreak on the right. (ISS030-E-064161 http://eol.jsc.nasa.gov/)

Photographer Gareth James
Watching the Partial Solar Eclipse
Inspiring And Glamorous Female Portrait Photography By Shibbi
Paris Picture Overlays
The 11 Winners Of The Prestigious 2021 Audubon Bird Photography Contest
This is What Photographers Look Like When You Take Away the Camera
Winners of the 2014 National Geographic Photography Contest
This Woman Had A Humorous 'Sexy' Boudoir Photo Shoot In A T-Rex Costume
Photographer Teemu Jarvinen Captures The Night Around Asia And The World
Vintage Images Of People & Their Beloved Volkswagen Buses
Shocking Photographs Show Japanese Drinkers Using Pavements, Doorways And A Plant Pot As Impromptu Pillows After Succumbing To The Effects Of Alcohol
Photographer Ron Gile Snaps The Wild Beauty Of The Alaskan Ice Caves
Abnormal accumulation of fish in Acapulco, Mexico
Wonderful Cactuses And Desert Plants Photography By Wachirapol Deeprom
An Incredible Design Of Space Age German Lifeguard Station
Vintage Photographs Show How Students Celebrated Spring Break in Texas In The Late 1980s
Shortlist Photographs Of The 2020 Bird Photographer Of The Year Competition
German Couple Finds The Filming Locations Of Movies And TV Series In Real Life And Recreates Their Scenes
Fun In The Water: 20 Interesting Vintage Pictures Of Surfers From The Early 20th Century
Great Portraits Of Ireland And The Irish At The Turn Of The 19th Century
25 Rare And Cool Polaroid Prints Of Teen Girls In The 1970s
Beautiful Vintage Color Photographs Of The Japanese Warriors Captured Over 150 Years Ago
This Is What Iranian Women Looked Like In The 1970s
Cool-Tone Urban Scenes In Vibrant Photographs By Juller Many
captured, images, lights, northern, space, spectacular