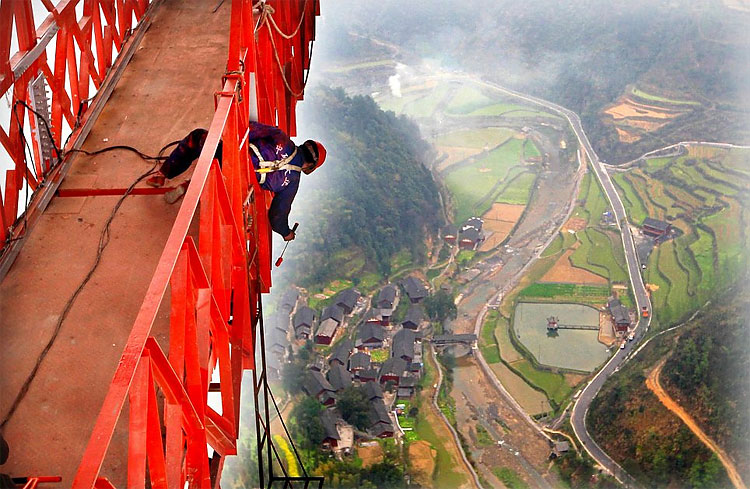 Aizhai is the world’s highest tunnel to tunnel bridge and the fourth suspension bridge in China to cross a valley so wide it seems to be connecting two mountain ranges. The first three were the Siduhe, Balinghe and Beipanjiang 2009 bridges. Of the world’s 400 or so highest bridges, none has a main span as long as Aizhai with a tower to tower distance of 3,858 feet (1,176 mtrs). Located deep in the heart of China’s Hunan Province near the city of Jishou, the suspension bridge is the largest structure on the Jishou to Chadong expressway with a deck 1,102 feet (336 mtrs) above the DeHang Canyon. 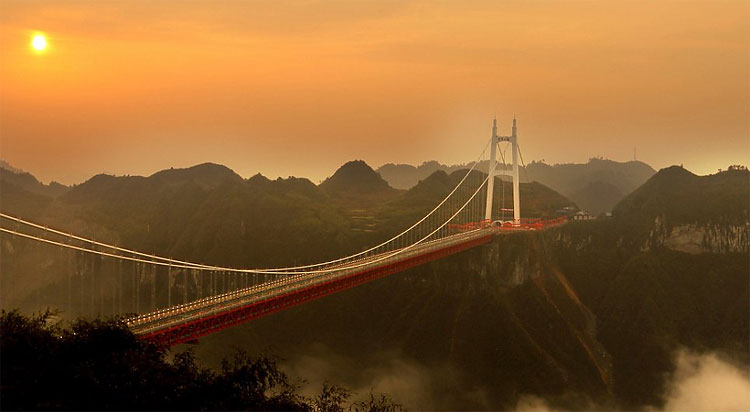 The two tunnels on either side of the Aizhai bridge allowed the engineers to use the mountain top for the location of one of the towers, reducing its height to just 165 feet (50 mtrs) – unusually short for a bridge with a span nearly as long as the Golden Gate bridge at 3,858 feet (1176 mtrs). In addition to cost savings, the stubby support also allows the bridge to blend more naturally into its surroundings. The taller bridge tower is no less unique with side span cables that soar down the backside of a mountain, making first time visitors quizzical as to what exactly lies ahead. With most of the structure hidden from view, the bridge will come as a jaw-dropping surprise whether you enter the canyon from either tunnel. Due to a gap of approximately 328 feet (100 mtrs) between the last truss suspenders and the tops of the bridge towers, the engineers added some additional ground anchored suspenders to stabilize the two massive suspension cables and reduce any oscillations that could damage other components of the bridge. An overlook and visitors center will offer additional views of the broad valley. 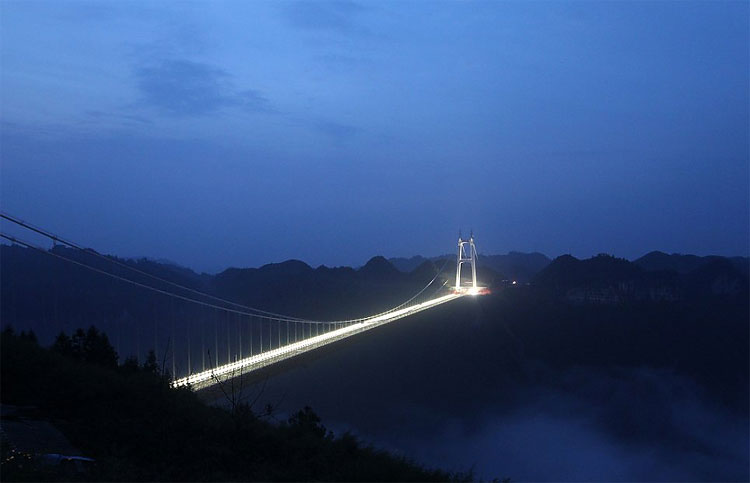 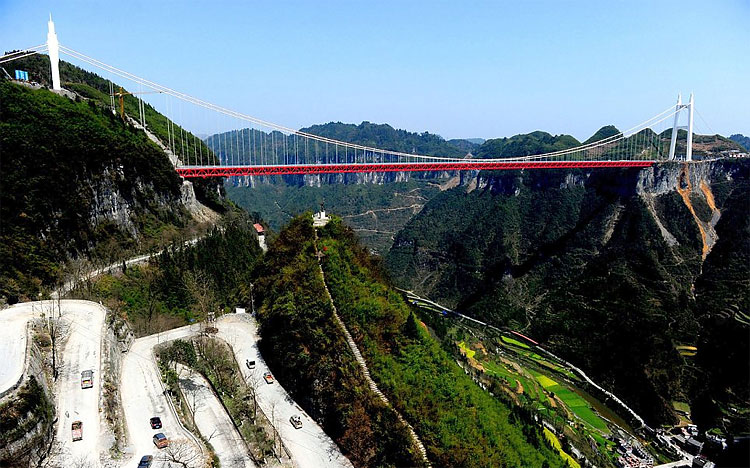 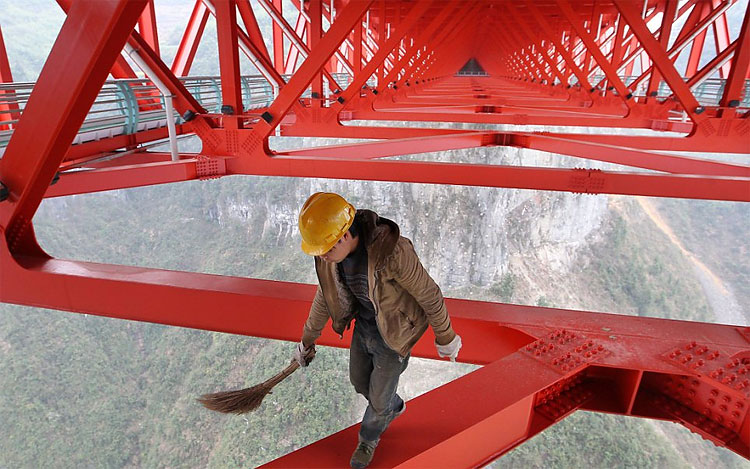 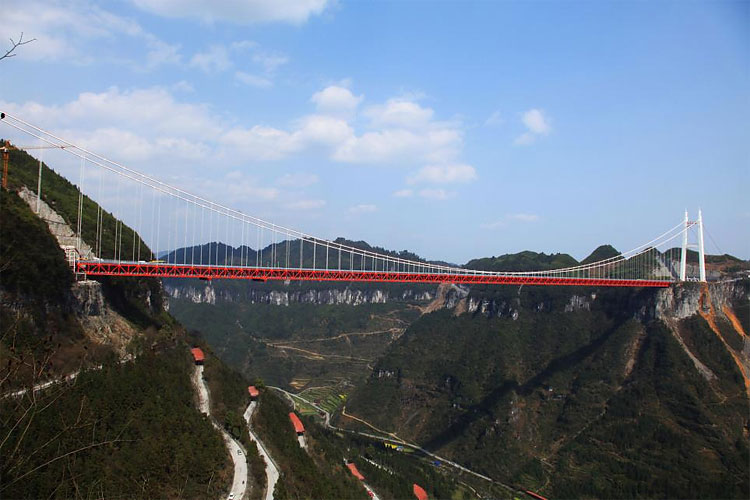 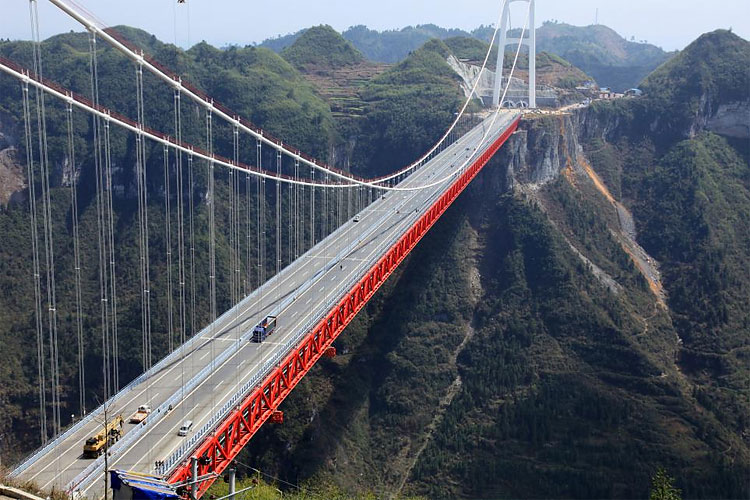 See the Ancient City of Pergamon in 360 degrees
This Incredible ’Time Capsule’ Home Hasn’t Changed At All For Over 72 Years
Watch 3-Year-Old Kid And Volvo Truck In The 'World’s Largest Unboxing'
Skyscraper Competition Proposal Involves Erecting Towers Within World's Largest Trees
This Is How NYC Central Park Would Have Looked Based On A Rejected Design From 1858
Designs of the Year
This Transparent Bubble Tent Lets You Sleep Underneath The Stars
World Map Made Out of 84K+ Beads
Mirage House With Infinity Pool On The Roof By Kois Associated Architects
Spanish Designer Fernando Abellanas Works In A Secret Studio Right Under The Bridge
Terrifying Russian Architecture Which Looks Better From Above
300ft-Long 'Airship' Unveiled In Britain Is The World's Longest Aircraft
Big Shout Out To One Of The World's Most Inspiring Grandmas!
Sky Bridge 721: World’s Longest Suspension Bridge Opens in Czech Republic
Artist Uses 100,000 Banned Books To Build A Full-Size Parthenon At Historic Nazi Book Burning Site
This Dutch Museum is Covered in Grass and Has a Rooftop Walkway
Steaming Ahead, the 180-Year-Old Toy Train that's the Oldest in the World
Probably, The Most Cozy And Beautiful Toilet In The World With Views Of A Norwegian Waterfall
World's Most Expensive Campervan Up For Sale
The Unique Bridge Between Sweden and Denmark
World’s Largest Railway Model Is Now On Google “Mini” Street View
Chinese Drug Maker’s Deluxe Office Building Comparable to Imperial Palace
Whale-Shaped Marine Observatory Will Let Visitors Take A Look Under the Sea
World Press Photo Contest 2019 Winners
aizhai, bridge, highest, tunnel, world

This Underground Shelter From The 1970s Was Just Listed For $18 Million
World's Biggest Yellow Rabbit Built in Sweden
Delicate Patterns Adorn The Walls Of This Bright Nail Salon Interior
What’s Wrong With Today’s Society Captured In 32 Brutally Honest Illustrations By John Holcroft
Girl Shares Pics Of Street Food From Around The World On Her Instagram Account
The Sky Swimming Pool At This Hotel Has A Window In It
Our Small World Through The Lens Of Russian Photographer Sergey Maximishin
300ft-Long 'Airship' Unveiled In Britain Is The World's Longest Aircraft
Model of Hogwarts Castle
Man Uses 11 Shipping Containers To Build His 2,500 Square Foot Dream House, And The Inside Looks Amazing
2007 ‒ 2022 by Design You Trust. Proudly hosted by WebHostingBuzz.
Privacy Policy · Terms of Service · Content Removal Policy ❤️ 🇺🇦