A cemetery of disused war planes in the scorching Arizona desert has been given a new lease of life – as part of an art project.
‘The Boneyard Project’ resurrects disused warplanes that lie in the famous Boneyard in Arizona by letting graffiti artists paint them. More than 30 of the world’s best urban artists worked on five ruined US Air Force jets, vividly bringing them back to life with paint and colour.

A painted Douglas DC-3 called ‘Phoenix of Metal’ by artists ‘HOW & NOSM’ and currently on display in Tucson. 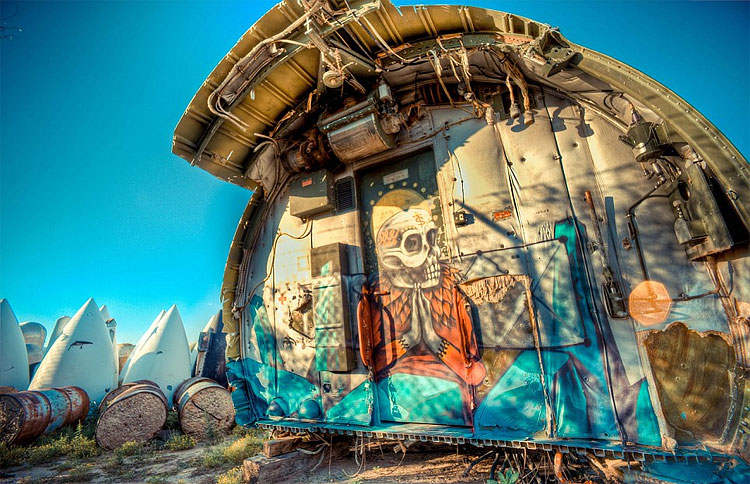 Artist Saner has decorated part of a disused war plane to give it new life. 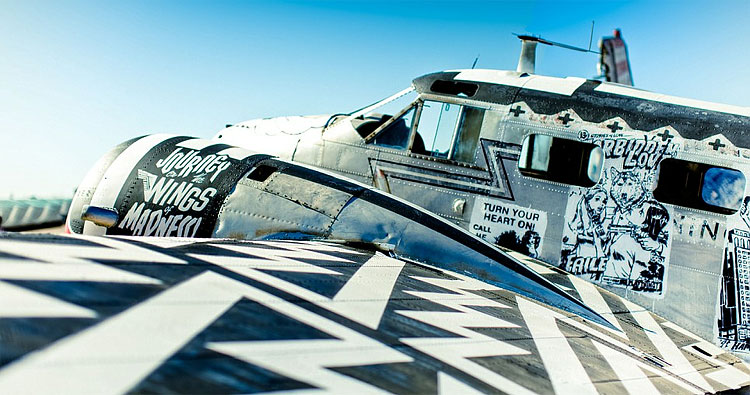 A painted Beechcraft C-45 model airplane called ‘Naughty Angels’ by artist Faile, part of the one in a lifetime event. 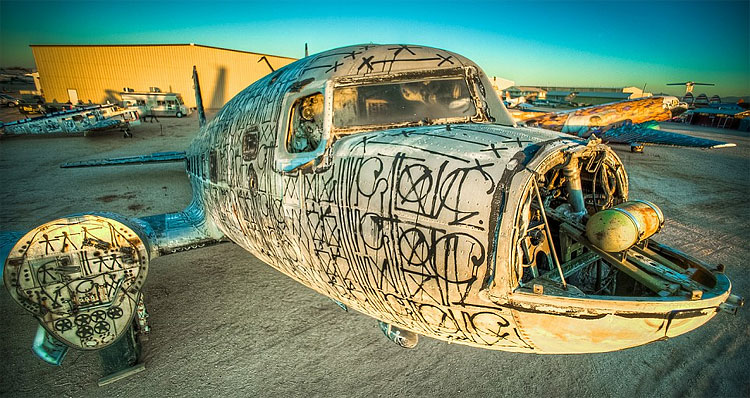 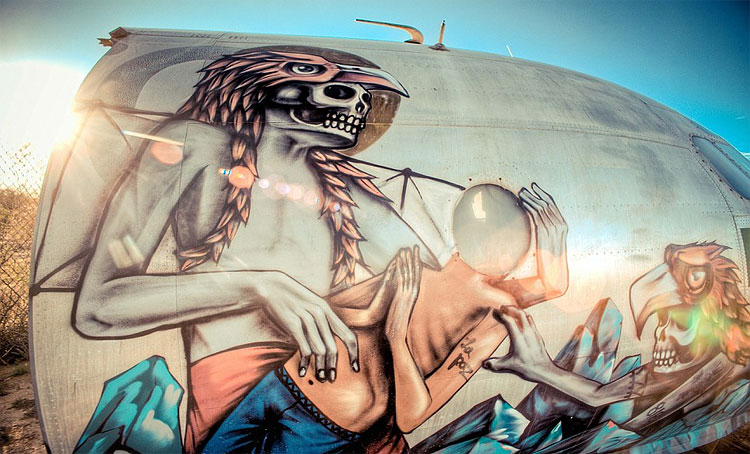 30 of the world’s best urban artists worked on the ruined jets to bring them back to life.

Andrew Shcoultz works on a Lockheed Jetstar airplane called ‘Spy Tigers’ in the heat of the Arizona desert. 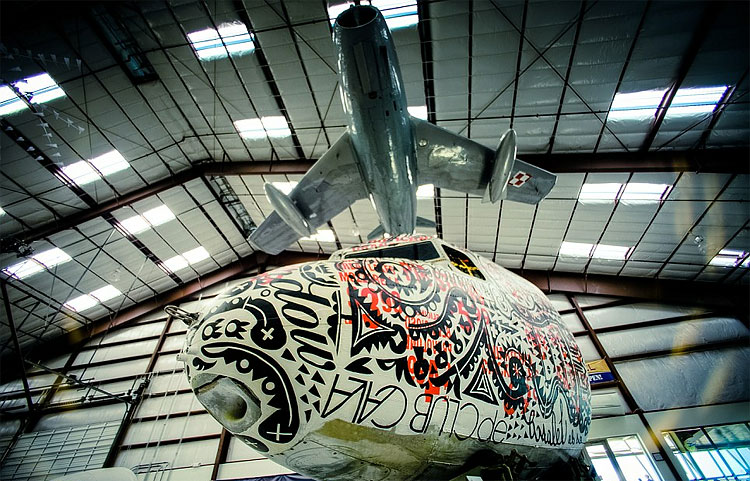 Some of the disused Boneyard planes took a few days to paint while others took weeks. 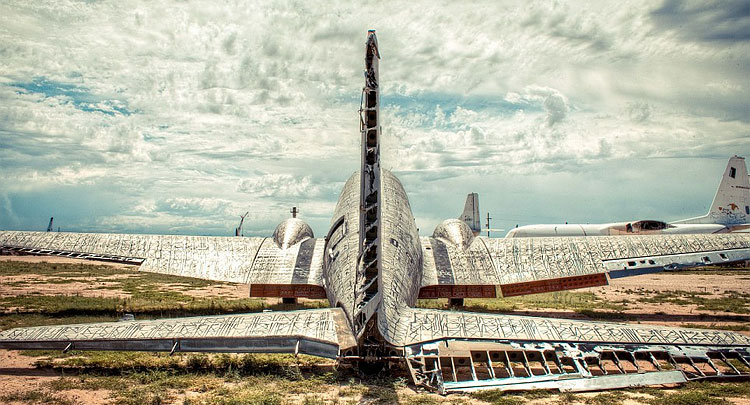 Artists were able to paint the whole exterior of the planes – and some chose to cover every last inch. 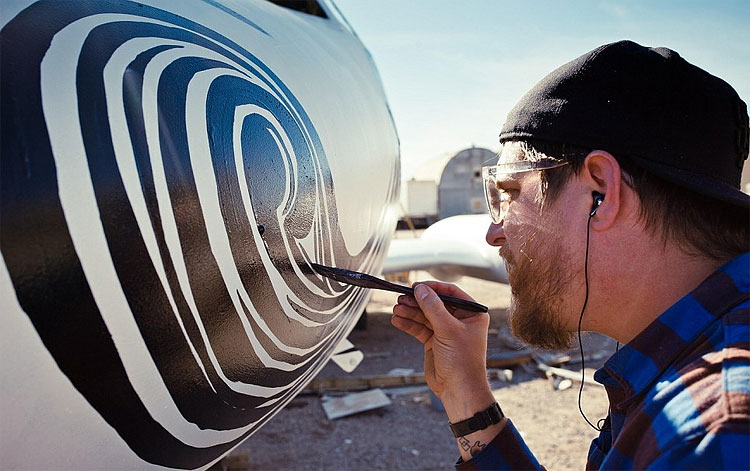 The intricate patterns require close attention to detail, with many of the Boneyard planes taking several days to complete. 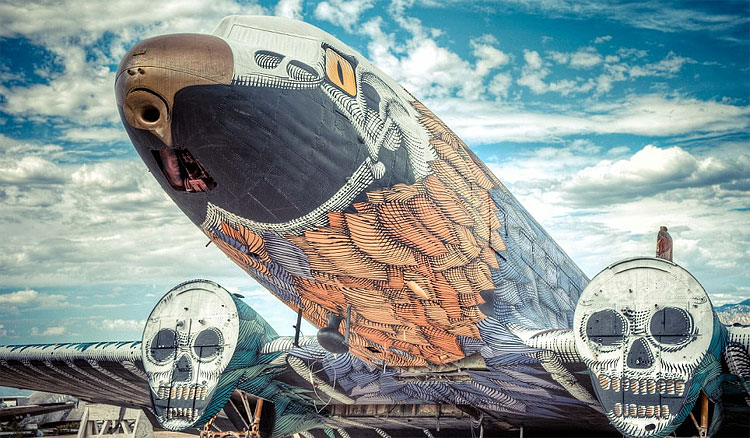 Planes in the art project are brought back to life with vivid colours and images. 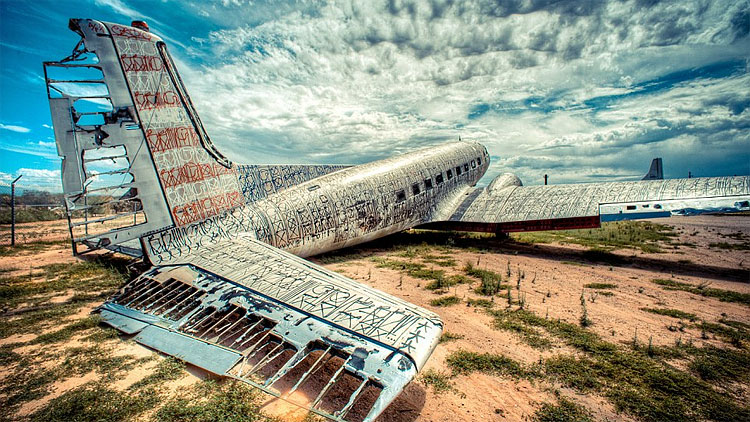 Most of the fighter jets sit in a patch of U.S. desert waiting to be used as spare parts for current models. 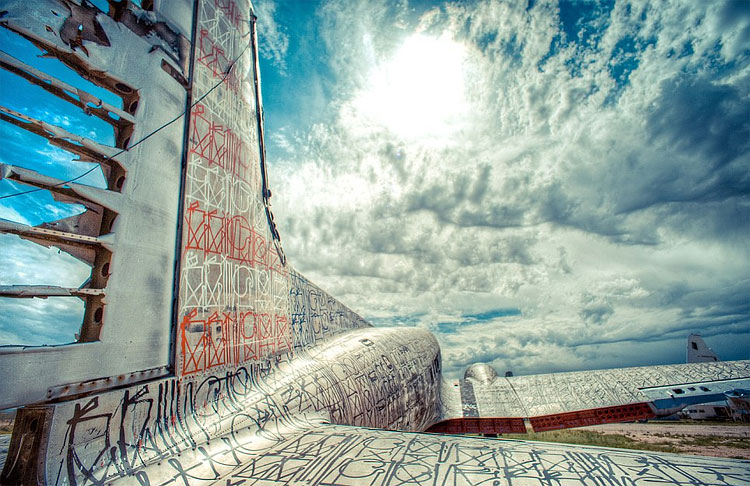 The discarded plane canvases will be on display until mid-May. 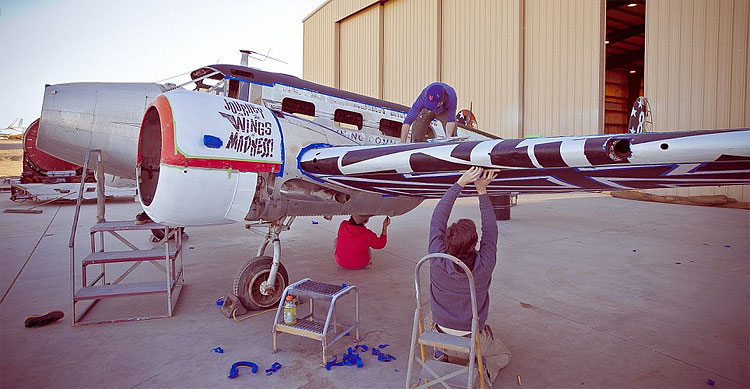 Some of the projects were collaborations between urban artists from all around the world. 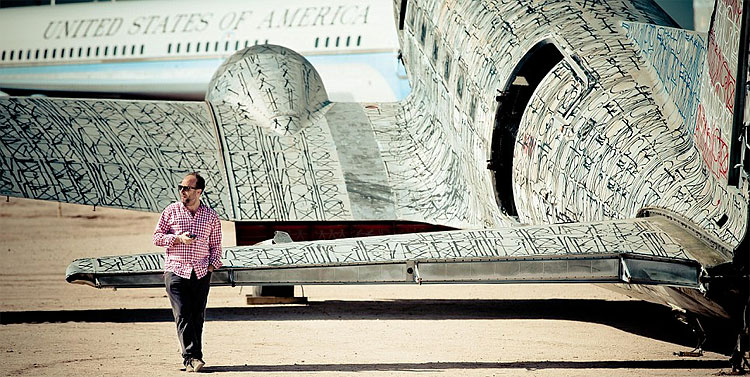 Artist Retna leans against a graffiti-covered Douglas DC-3, called ‘Warning Shot’, which retains some elements of the United States flag. 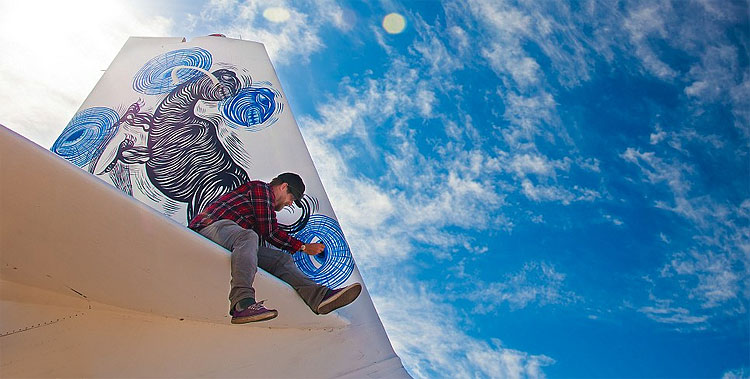 Andrew Shcoultz is one of the 30 artists who painted disused planes as part of the innovative project. 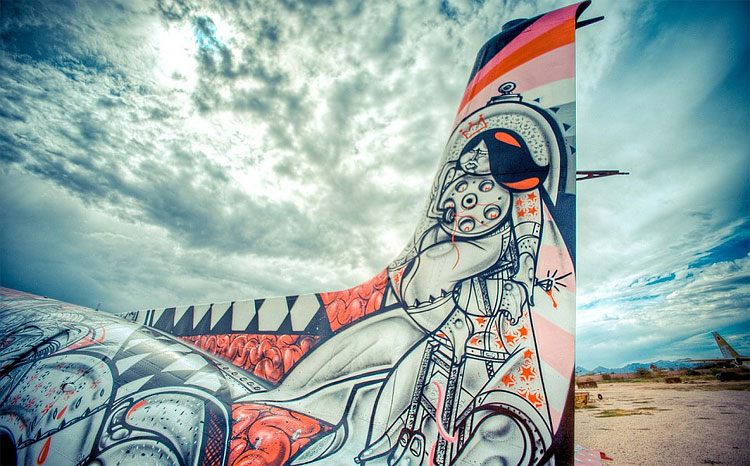 Artists swapped walls for wings in the project aimed at resurrecting disused war planes in a new guise. 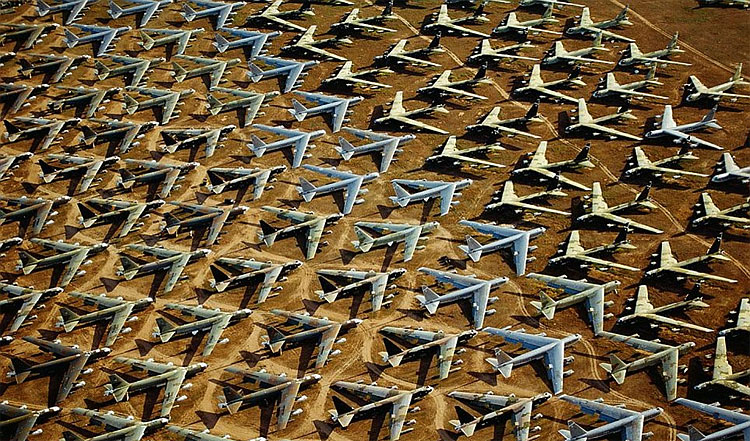 Squeezed up against each other, these B-52s are stored at what has been dubbed ‘The Boneyard’ in Arizona. 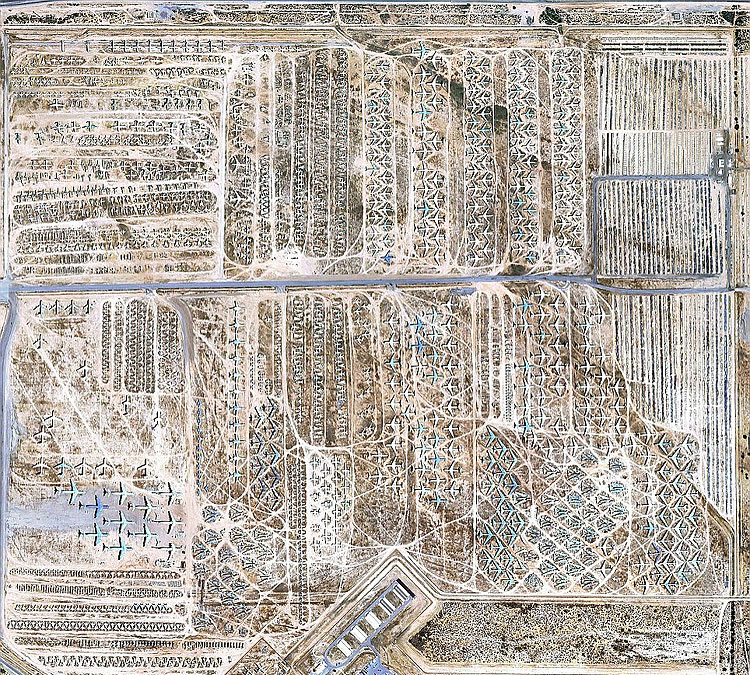 Google Earth image showing the 2,600 acre site, which is home to 4,200 aircraft. Of these, 80 per cent are used as spare parts for the current U.S Air Force flee.

Amazing Vintage Photos Of 1937 Cadillac V16 Series 90 Hartmann Cabriolet
Close Up
Extreme Photomanipulations
DayZ Postcards
Monkey Controls Robotic Arm With Brain Implants
At the End of the World
A Pair of Back to The Future Fans Have Built the World’s First Life–sized Replica of The Time Travel Train
Fascinating Nostalgic Color Photos Show What the World Looked Like in the 1950s
Rob Greenfield Dumpster Dives to Save the World from Food Waste Fiasco
Tiny Star Wars Terrariums Bring Far Away Galaxies Into Your Home
Banksy to Auction
Living With Humanoid Robot
Sculptures By Susan Lordi
Delahaye Type 165: The Most Beautiful French Car Of The 1930s
This Artist Transforms The Animal World Into One Of Puzzling Beauty And Surreal Interrelationship
Amazing Vintage Photos Of The Grateful Dead’s Wall Of Sound, 1974
JUST EAT Pilots Robots To Deliver Food From Restaurants
Skull "Fleurs Noires" by NooN
Street Photographer Travels The World Portraying Very Different Personalities Of Dogs
Monster Made Out of Plastic Bags
Amazing Photos Of 1949 Delahaye 175 S Saoutchik Roadster, Which Was Owned By English Blonde Bombshell Diana Dors
Stunning Photos Of The Installation Process For 5G Network Equipment On The Mount Everest
Firebird III: One Of The Most Intriguing And Influential Concept Cars Of General Motors
"Extavium" Museum in Potsdam, Germany
disused, force, given, graveyard, lease, world