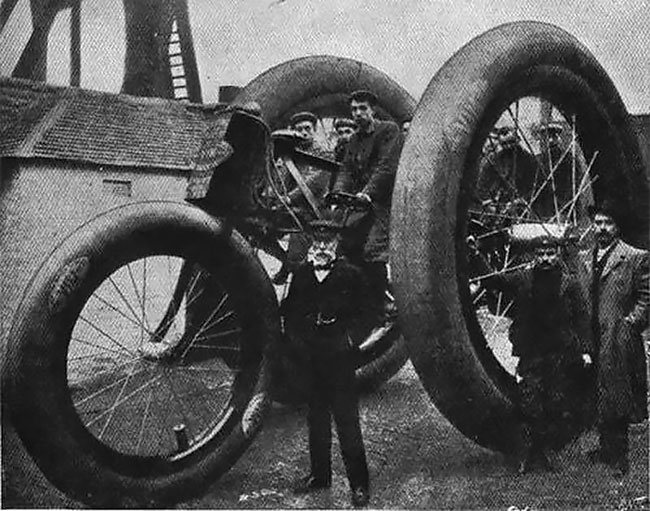 This giant eight man tricycle was indeed a promotional stunt, used to promote “VIM” tires made by the Boston Woven Hose and Rubber Company, around 1896. 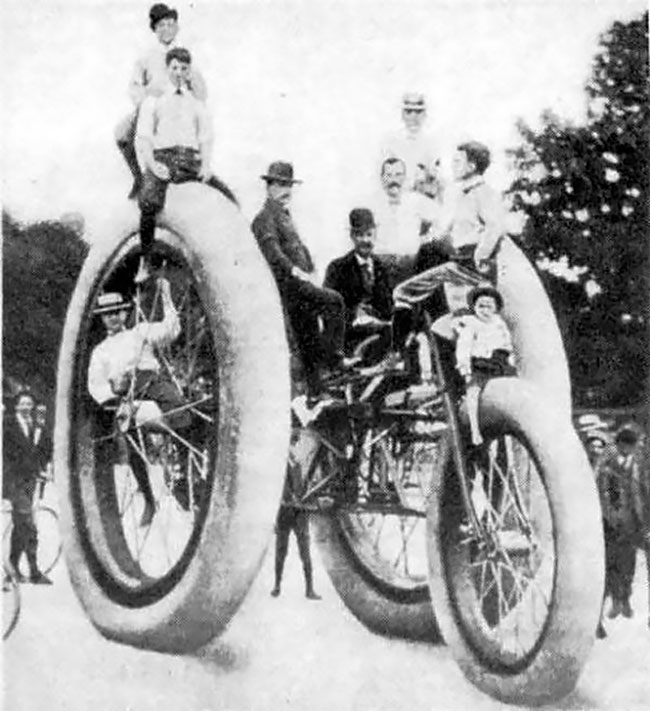 It takes eight men to propel it, and was built complete at the company’s factory in Cambridgeport, from plans by John Dewolfe, the mechanical expert of the company. Many attempts have been made in the past to build giant machines, either bicycles or tricycles, but none of them have ever been successful, faulty construction proving the obstacle to the success of all previous similar undertakings. This tricycle has already been used with success at meets near Boston, and has been ridden over the road seme few miles around that city. 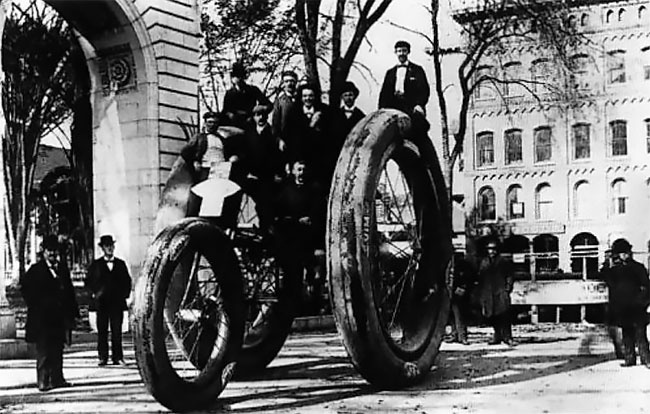 The extreme height of the machine is about eleven feet, which is the diameter of the larger wheels and tires when inflated; the cross section of the two tires is sixteen inches. These are the natural rubber color. The smaller or guiding wheel has a diameter of six feet with a cross section of nine inches. 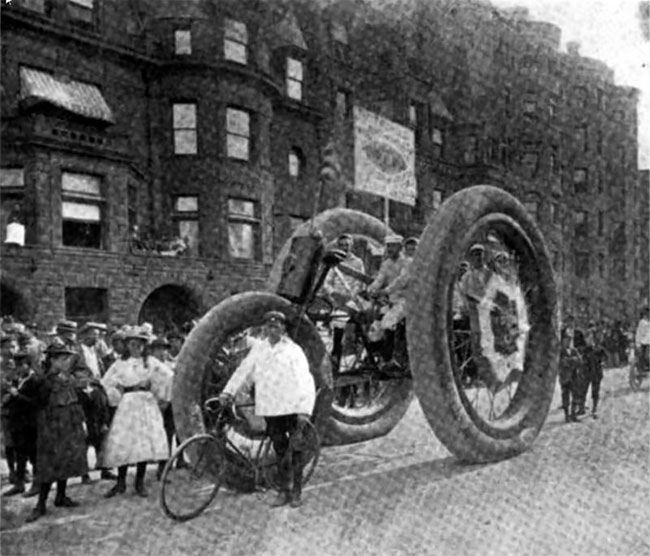 This tire is of the floxine color, which this company has used to characterize its product this year. The three tires are exactly the same in construction as the regular VIM tire put out by the firm, and has its pebble tread. The machine weighs 1,453 lbs without the eight men, who weigh approximately 1,120 lbs more. This makes the whole thing 2,573 lbs. 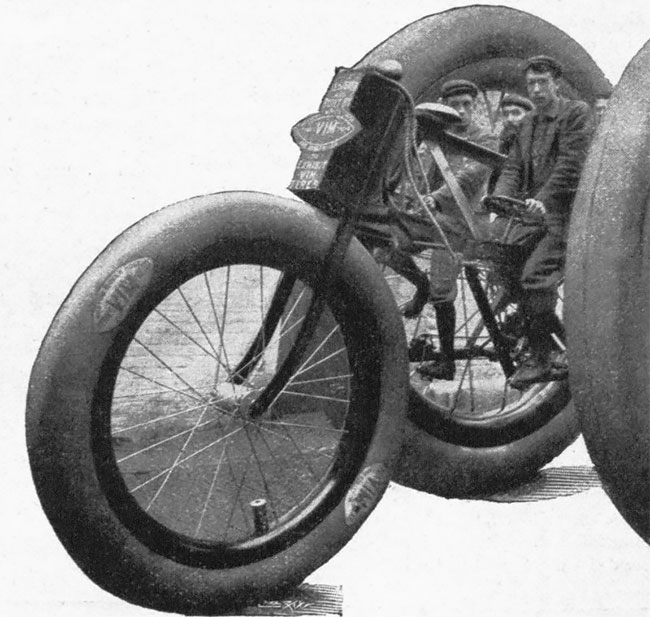 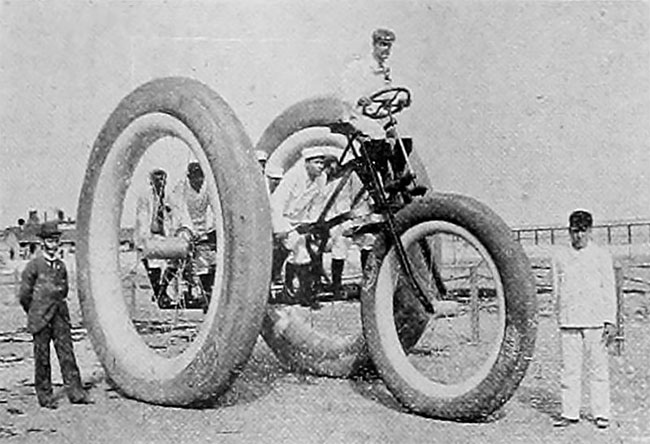 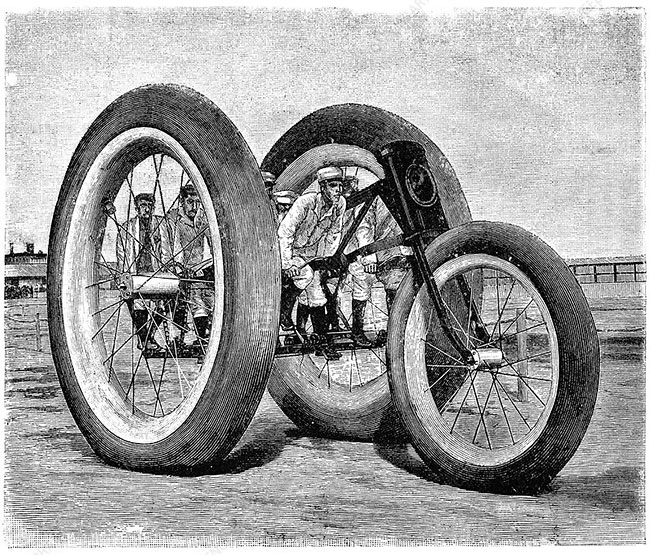 Little Girl Declares Her Love For Abandoned Water Heater On The Street That She Thinks Is A Robot
A World's Giant Statue of A Wolf Was Installed in Kazakhstan
Green 3D Printer Prints Living Designs From Organic “Ink”
Cool Pics That Show How People Enjoyed Parties In The 1970s
Street Artist Pays Homage To Pop Icons With Giant Murals
Nostalgic Photos Of American Teenage Girls At Texas Beaches During The 1980s
Introducing Foodini: A 3D Food Printer
Vintage Photos of Cars During Winter in the 1950s and ’60s
40 Fabulous Photos of Kim Basinger in the 1970s
Tesla Model S: World’s First Electric Sedan Hits Road
Giant Suit was Made to the Launch of the Satchi Suit Brand in China
A Car For The Jet Age: Cool Pics Of The 1956 Oldsmobile Golden Rocket
The Japanese Supercar That Almost Was - The Dome Zero
Turanor PlanetSolar: The First Solar-powered Boat
A Wind Turbine is Illuminated in an Installation by French Artist Patrick Raynaud
Japanese Illustrator Imagines A World Where Humans Live Among Giant Animals
This Cheap Shot 130 Crossbow Will Protect You From The Zombie Apocalypse
A Look at Girls’ College Dorm Rooms in the Seventies
iblazr - the First Universal LED Flash for Smartphones and Tablets
Walter Pichler’s Futuristic Visions from the '60s
Iris van Herpen Creates Futuristic Wearable 3D Printed Pieces
Punkt. DP 01 Cordless Phone
Sci-Fi Author Jared Gray Turns His Sleep Apnea Mask Into An Alien Facehugger
Atmospheric Retro Images Of The USSR As Photographed By American Professor Thomas T. Hammond
1890s, giant, retro, tricycles