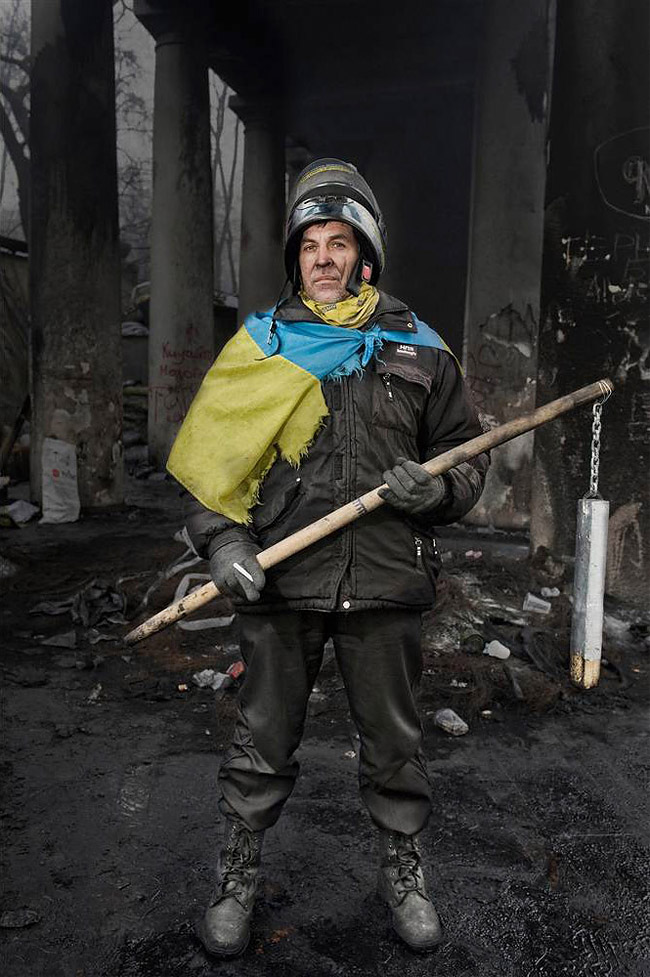 This man patrols the main front beside the access point to Lobanovskyi Dynamo Stadium, an area where the barricades are weak. For months now, he has slept very little. He is a carpenter. 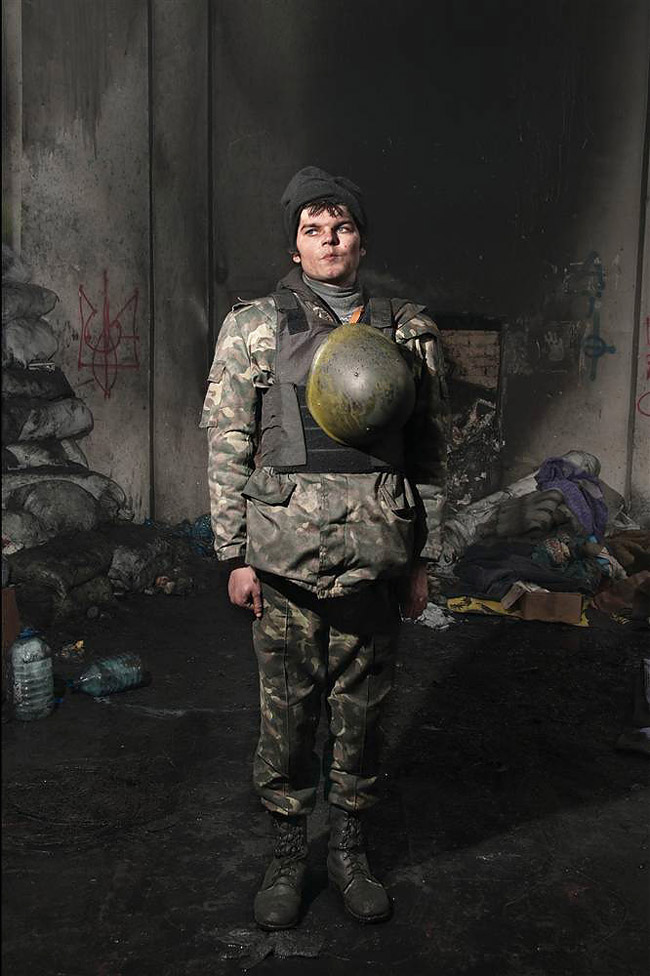 A young man who comes from a small village in the Volhynia region in the western part of Ukraine. He’s a carpenter. He declares he will fight and die if necessary to gain freedom for his country. 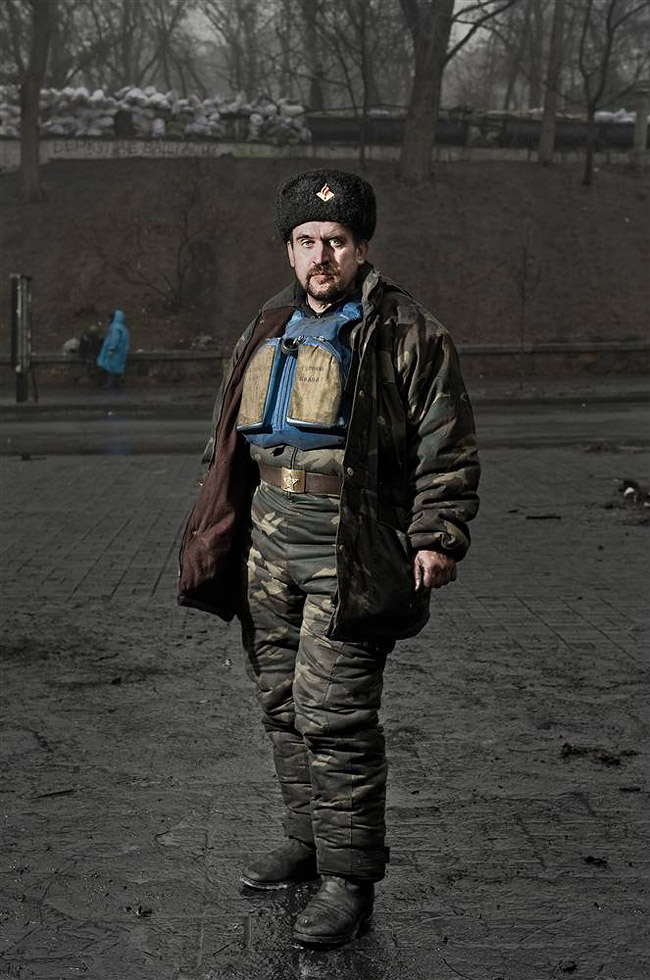 This man from Leopoli is a carpenter in his daily life. He was watching the riots on TV when he decided to take action and head to Maidan. He now patrols the main front line beside the access point to Lobanovskyi Dynamo Stadium. 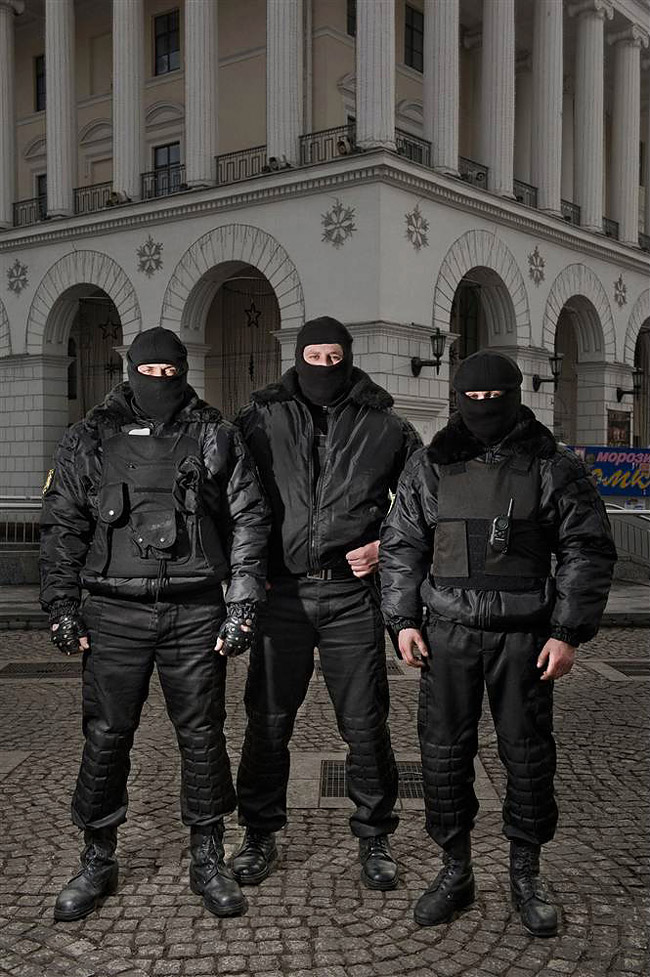 These men are called “the Bears” by the protesters. They are professional security guards, well trained for guerrilla situations and ready to fight. They have been fighting for Maidan since the beginning. 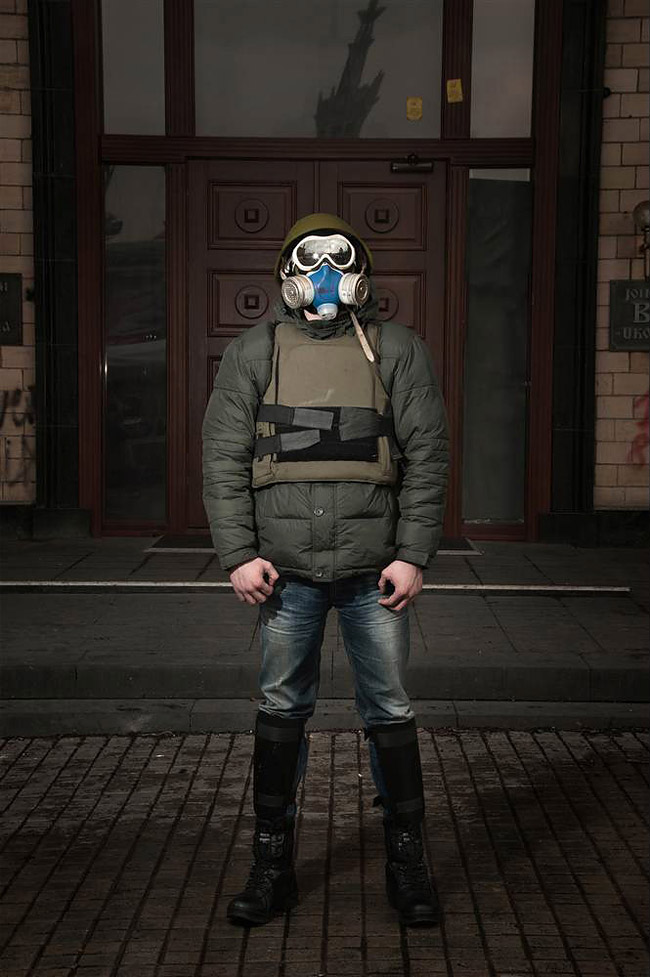 A young man wearing a gas mask during a test near the main square. Fighters have random access to military gear, often very old or provided by private donors. 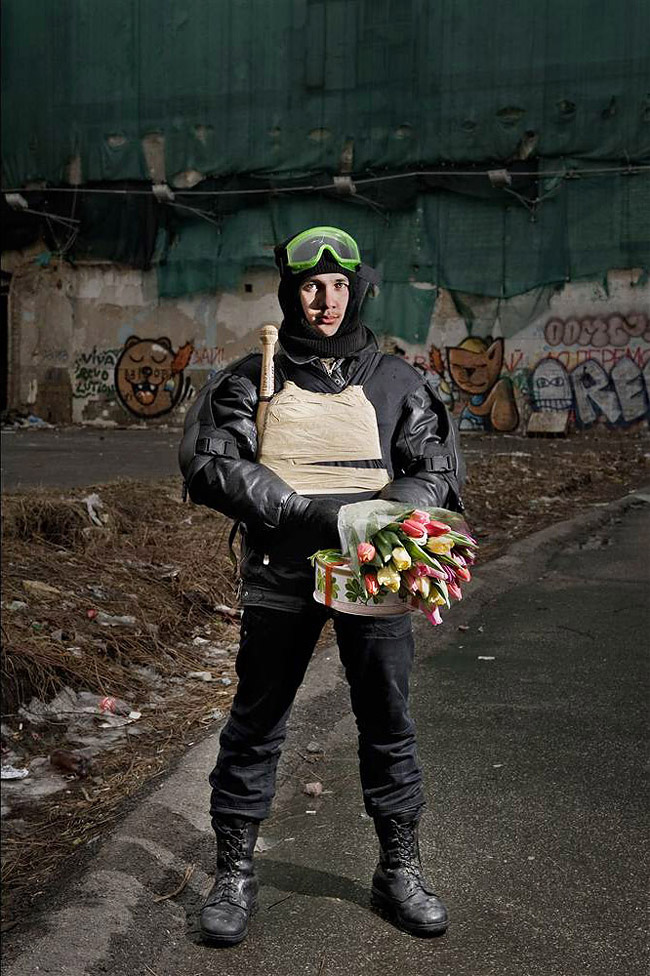 A young man taking flowers and chocolate to celebrate a friend’s birthday in Maidan. He is a native of the Vinnycja region and is a sales agent in a supermarket. 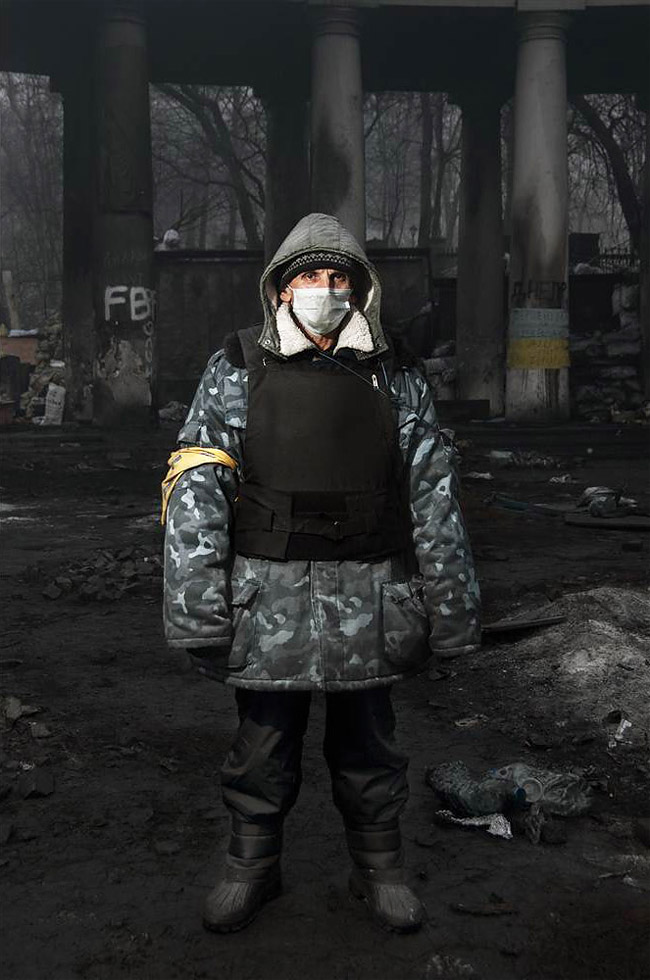 A retired man from western Ukraine. His father fought for Ukraine’s independence decades ago but was arrested, sent to Siberia and imprisoned for 22 years. He wears an “enemy” outfit, confiscated by protesters during a clash. 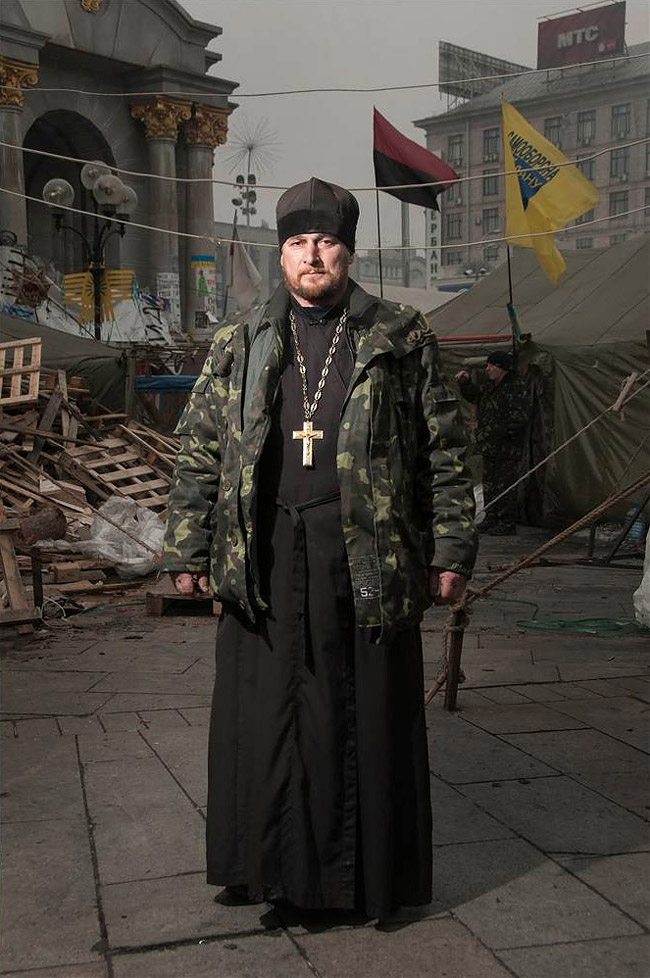 A priest of the Orthodox Ukrainian Church from St. Nicholas parish in Kiev. In early December he was drawn to the people gathering in the main square to protest and fight. 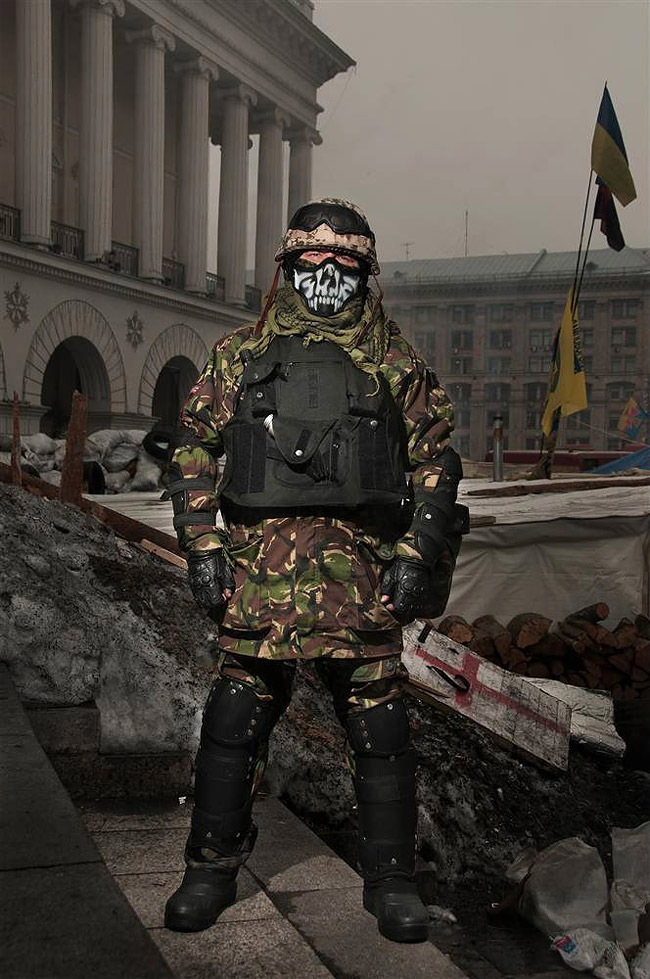 Originally from the Dnipropetrovsk region and a veteran of the Soviet war in Afghanistan, this anti-government protester is the director of a children’s hospital and also works for a security agency. He believes that returning to the 2004 constitution with limited presidential power is a crucial step in the path to freedom. 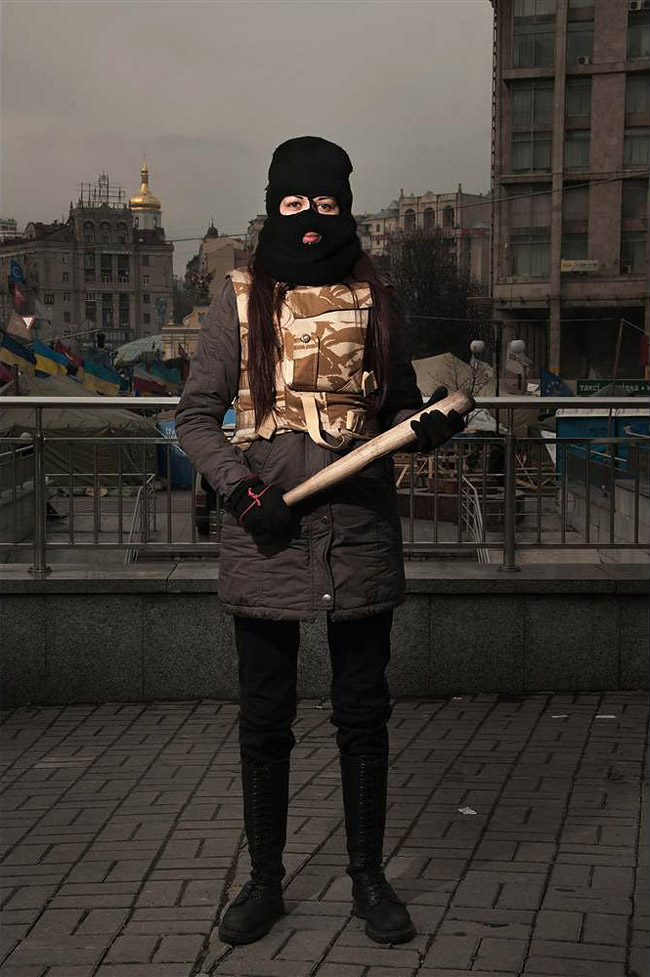 A young woman from Surny in the north of Ukraine. She is a sales clerk in a supermarket. She was shocked to see how well organized the protest has been, like in a military camp. She said she will fight to the death if necessary. 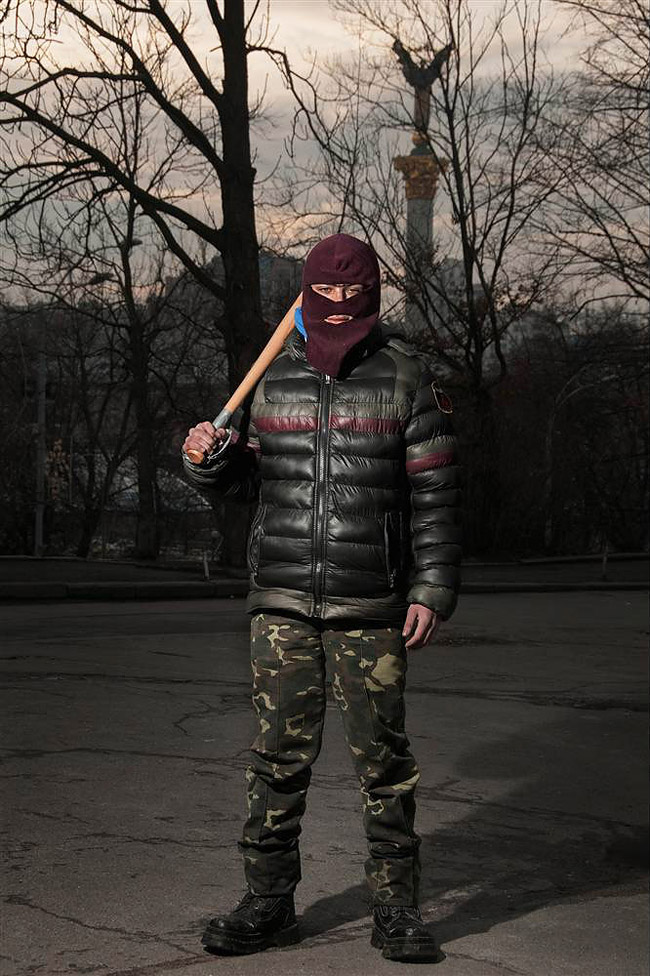 A protester from the city of Lviv, in western Ukraine, is applying to become a cook and wants to move to Poland to finish his studies. He shares his thoughts of freedom with those who came to the Maidan, or main protest camp, to free the country from what they believe is a corrupt government. 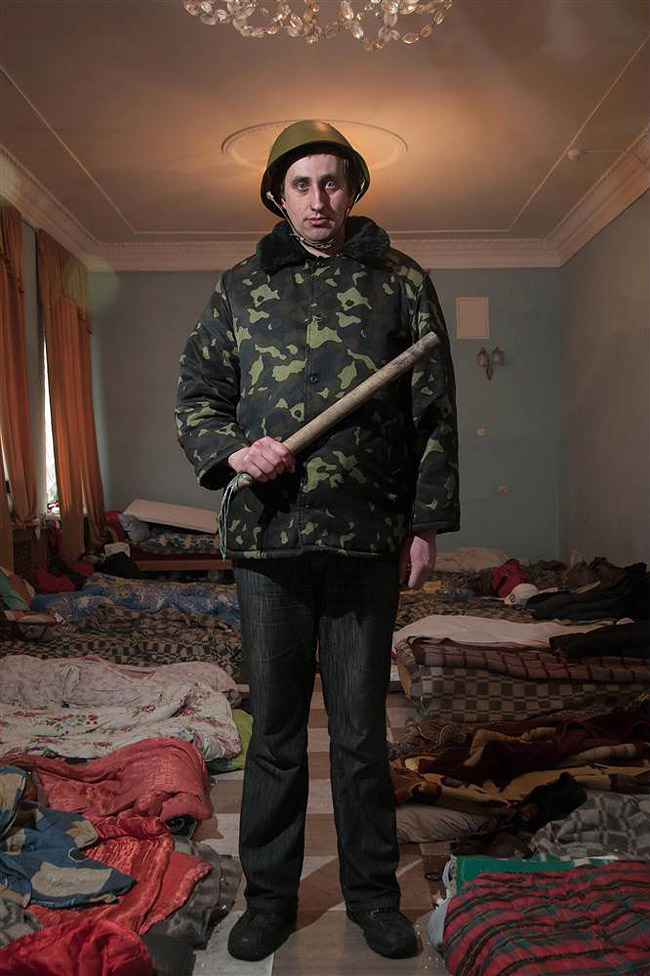 A man in the International Center of Culture and Arts, which has been occupied by protesters. He is a schoolteacher and is overwhelmed by the violence of the riots and the brutality of the government forces. 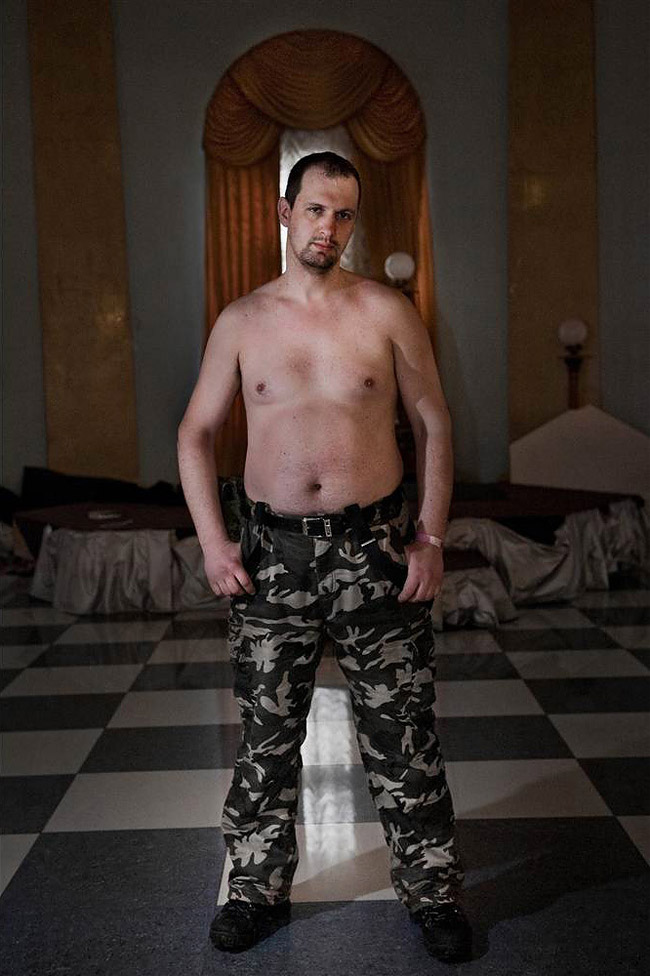 Nikola is a native of the Crimean region of Southern Ukraine, but he is now based at the ICCA, where many of the demonstrators currently sleep. 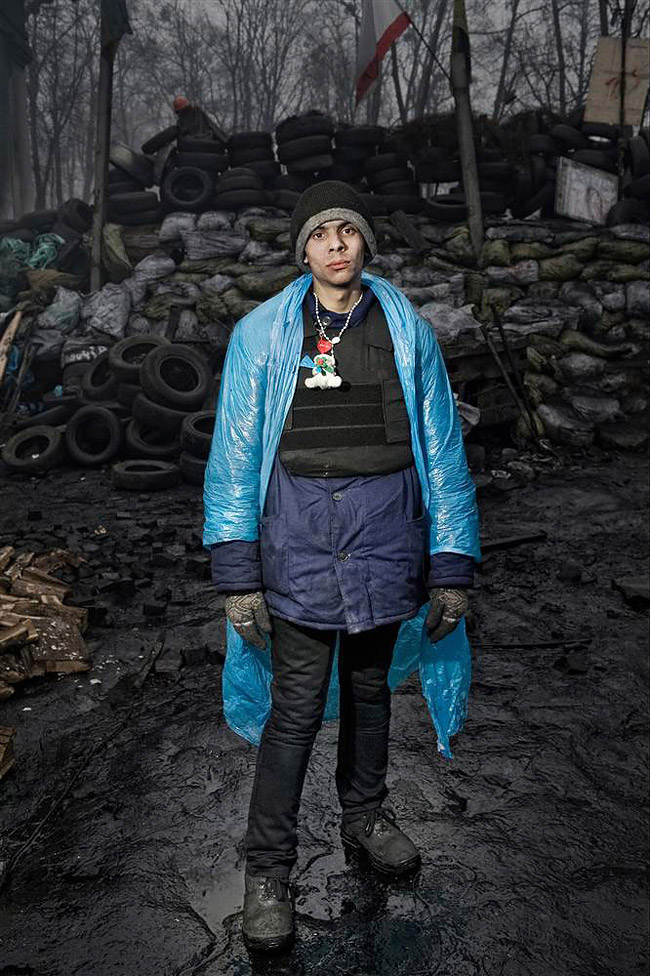 A young man patrols the main frontline in the anti-goverment protests on Grushevskogo street, leading to the parliament building in Kiev, where protesters have erected high barricades of tires, bricks and snow. He says that victory for protesters is the only way out. 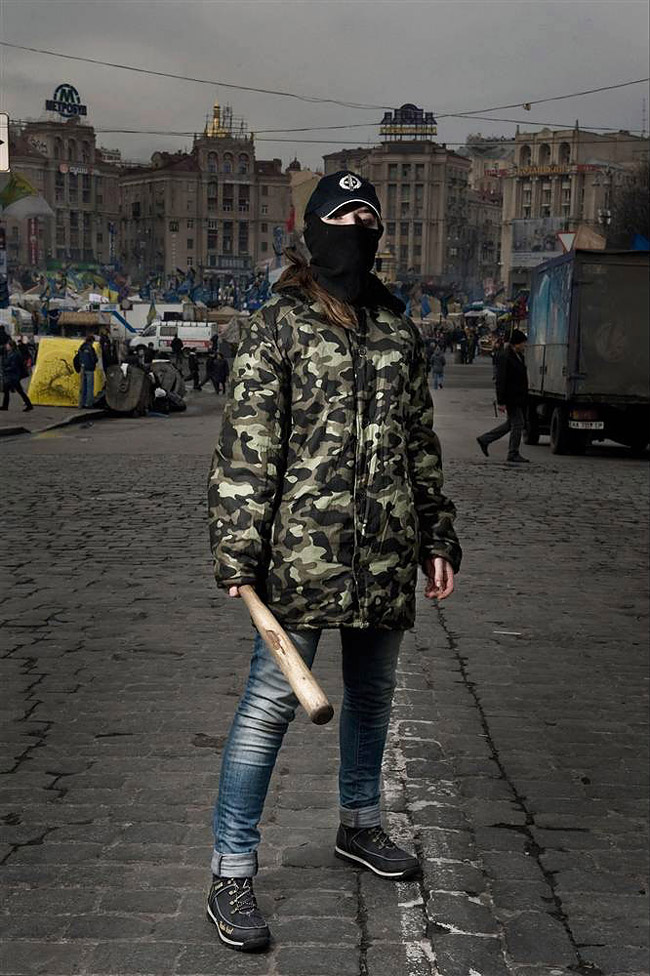 A young woman from the right wing “Viking Union” faction of the protest, who is a history student from Kiev, says she will fight until the end of this war for freedom, as the Ukrainian people have done before. 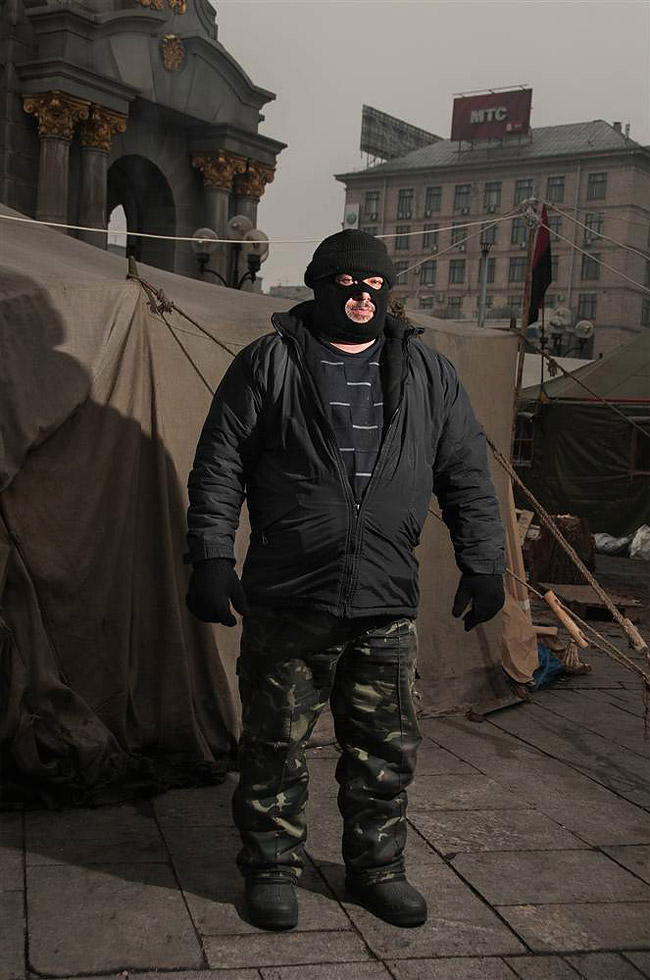 This former soldier in the Soviet war in Afghanistan came to the Maidan to train ordinary people in self-defense for clashes with police. 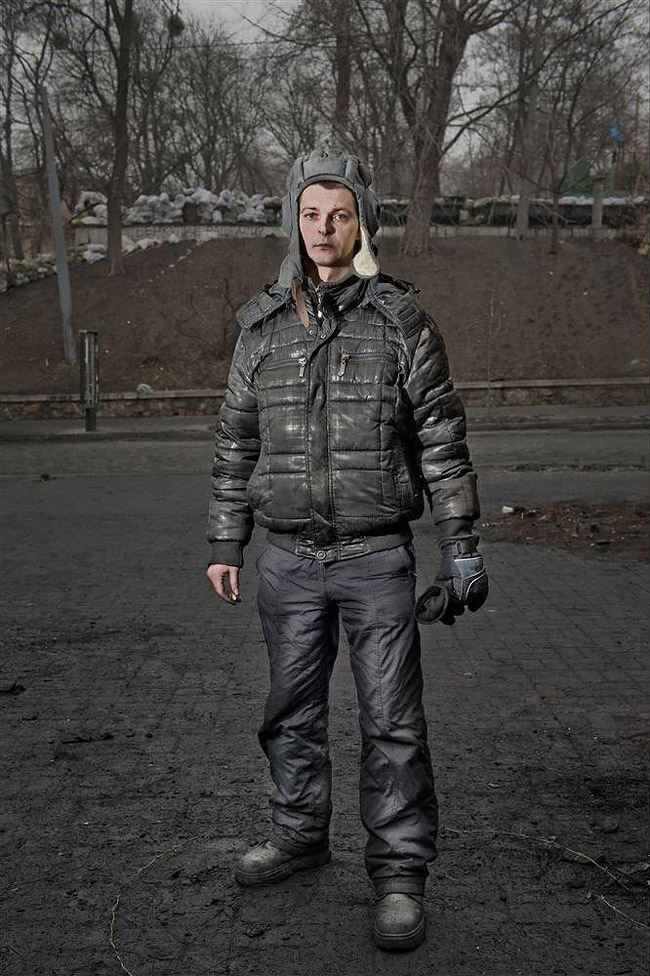 A young man from Lviv patrols near the Lobanovskyi Dynamo stadium, the scene of violent clashes with government forces. He works in informatics. 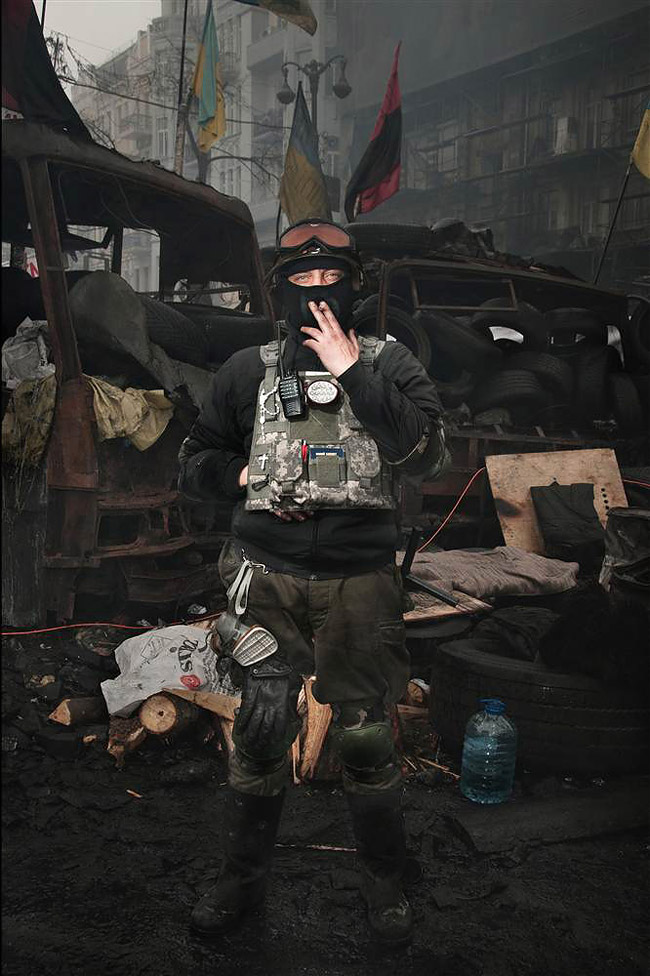 A man from Vinnycja serves the opposition on the main frontline on Grushevskogo street. He is an artist, painter and photographer. He says he is horrified by the violence of the clashes and the brutal force used by the government’s special forces. 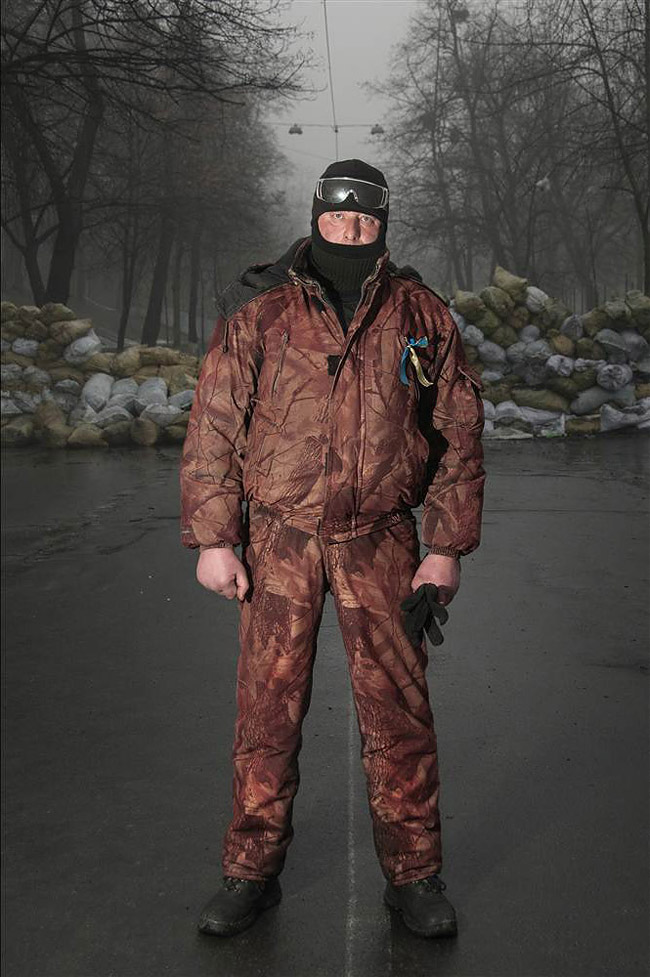 A man from Vinnycja in the Carpathian region of Ukraine. He works as a professional security guard and has been in the Maidan from the very beginning of the protests. He is convinced that the protesters will win their fight for freedom. 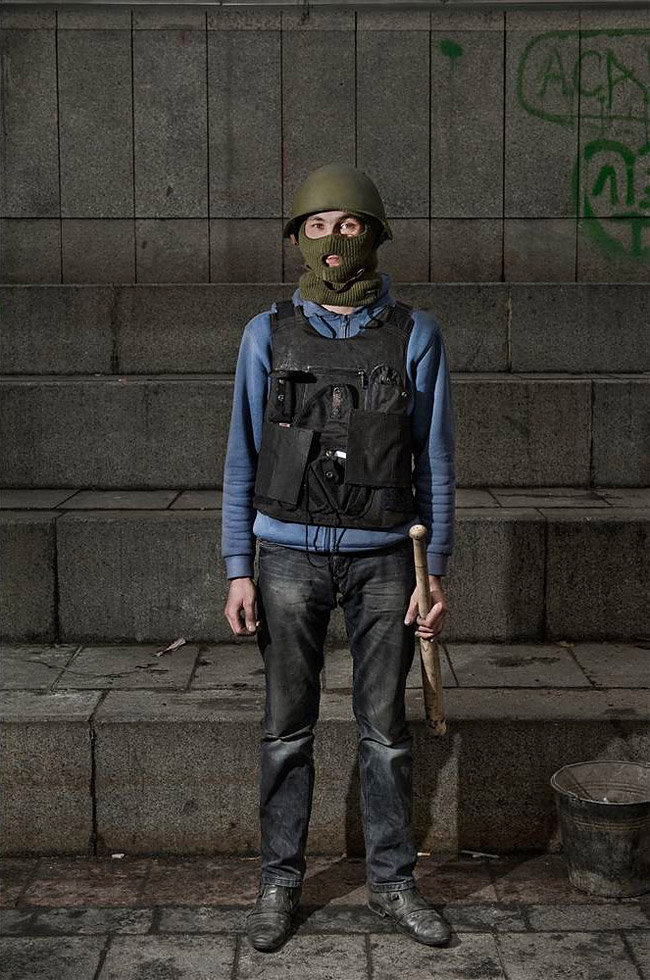 A 20-year-old railway worker from the Cherkasy region was surprised by his own courage during the clashes. He says the media has left the rural regions of Ukraine in the dark about the protests.

Photographer Captures a Dark Carnival Themed Photoshoot to Create Couture Clowns in Abandoned Creepy Nature
Heart of the Sun
Model's Underwater Shoot with Whales
Beautiful Vintage Photos Show How Cool Moms Were in the 1960s
Photographer Mike Kelley Captures Air Traffic In A Way You've Never Seen Before
Poland's Mysterious "Crooked Forest" Populated with 400 Bent Pine Trees
Mila Kunis is New Face of Christian Dior Spring/Summer 2012
Cool Pics That Show How People Enjoyed Parties In The 1970s
September 7: This Day In Photos From The Past
Bar Refaeli - Passionata Spring/Summer 2012
The Serendipitous Clouds And Faux Reflections Of Photographer Kanghee Kim
French Photograher Captured Stunning Pictures Of Post-Soviet Holiday Camp In Artek, Crimea
"On Adventure With Dad": This Guy Sends His Girlfriend Photoshopped Photos Whenever She Asks If Their Kids Are OK
The Winning Photos Of Animal Friends Comedy Pet Photo Awards 2022
Small Wonders in the Water
Undertaker Couple Take Coffin-Themed Wedding Photos
Artist Andrew Myers Creates Amazing Portraits Built From Screws
Mike Miller's Photography Captures '90s Hip-Hop And Lowrider Culture To The Fullest
The Series of Aerial Images by Cássio Vasconcellos Reveals a Contemporary Look of Life Stories from A Globalized World Seen Through Mosaics of Constructed Images
If The Moon Were Replaced With Some Of The Planets From Our Solar System
Underwater Giants: The Magnificent Manta Rays of the Maldives
Walmart Keeps Posting Pictures of This Employee Posing With Stuff, She Goes Viral
Burning Man 2019 Mega-Post: Fantastic Photos From The World’s Biggest And Craziest Festival
Photographer Captures The Unique And Amazing People Of The New York Subway
maidan, portraits, protesters, stunning, ukraine

The Breathtaking Geometry Of America From Above
Tiny Critter Becomes a Big Wheel
Model's Underwater Shoot With Whales
Nonstop Metropolis: Magical Photos Of New York City By Sidney Chua
Photographer Captures Portraits Of People Facing A 240 MPH Leaf Blower
Inside Opower's Arlington Office: A robot, a Scooter and Many, Many Couches
Cool Photos of Boston Girls of the 1970s
Mystery Abandoned Hospital in Perrysburg, New York
The Art of Science: Olympus Image of The Year Award Announce Its Winners for 2021
Amazing Vintage Photos of Postwar New York From 1945 to 1948
2007 ‒ 2022 by Design You Trust. Proudly hosted by WebHostingBuzz.
Privacy Policy · Terms of Service · Content Removal Policy ❤️ 🇺🇦