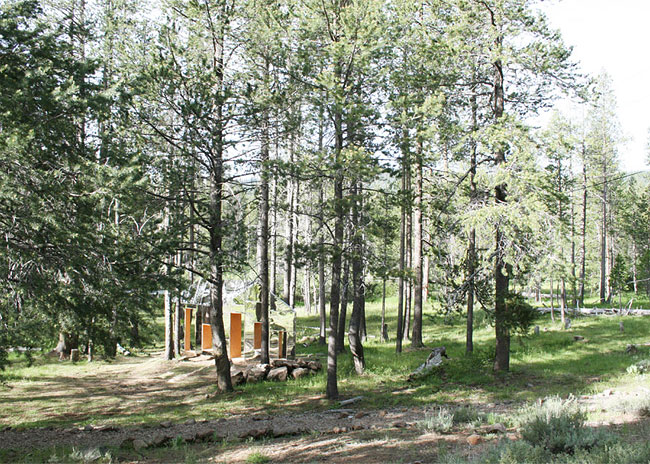 Mirrors clad the walls and rooftops of this woodland installation by architecture studio STMPJ, so that at first glance visitors might think its timber-lined windows and doorways are floating in midair. 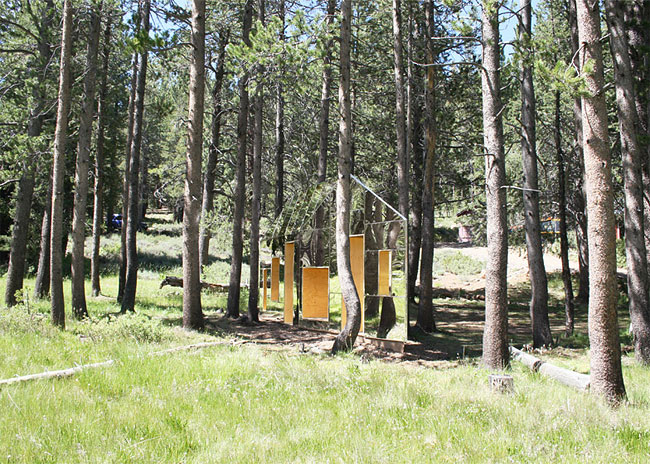 Named Invisible Barn, the slender structure is located among a grove of trees at the Sagehen Creek Field Station – a nature research facility operated by the University of California in Tahoe National Forest. 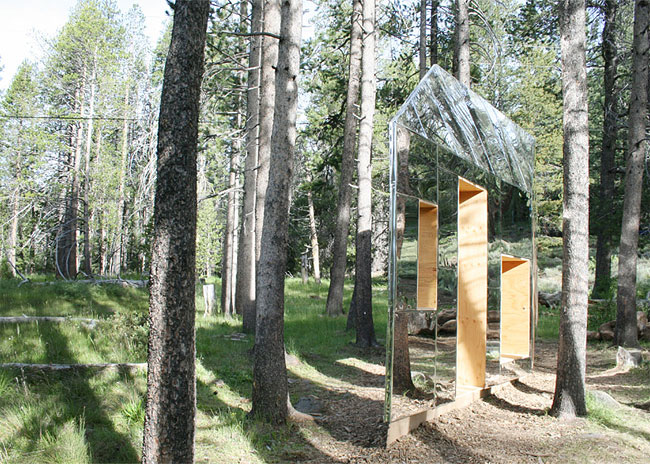 The mirrored facade helps to camouflage its presence but also creates confusion about its size and shape. 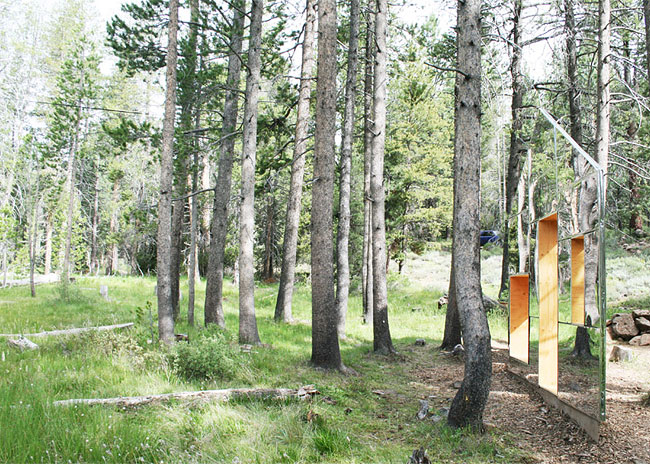 “Around the circumference of the grove there are a dozen of trees in similar size and equal spacing from one another,” explained STMPJ – a New York and Seoul-based studio led by architects Seung Teak Lee, Mi Jung Lim and Toby Snyder. 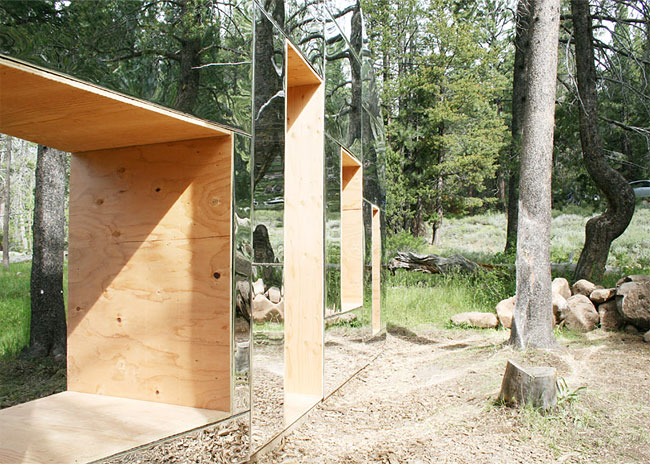 “Due to the similarity in the size and placement of the trees, the projection on the mirrored surface is similar to what people would see without the folly. This creates a visual trick that the framed openings are floating on air in the grove.” 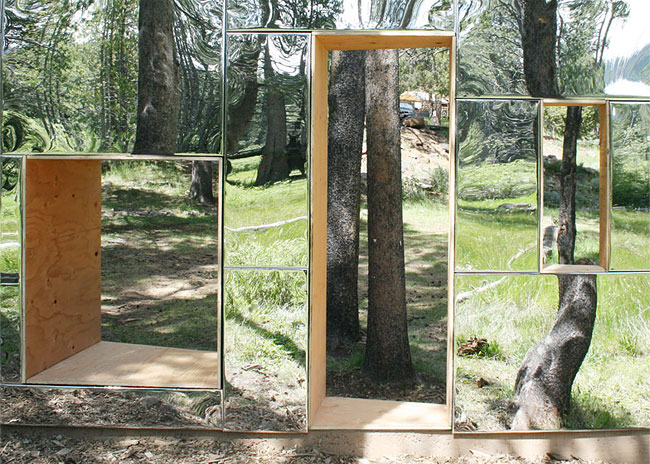 The architects originally designed the structure for a folly competition spearheaded by the Architectural League of New York and Socrates Sculpture Park.

They didn’t win but were commended by the jury, and so were later offered other opportunities to build the design. They chose Sagehen Creek, for “its vision in integrating art, science, and the natural environment to address environmental issues.” 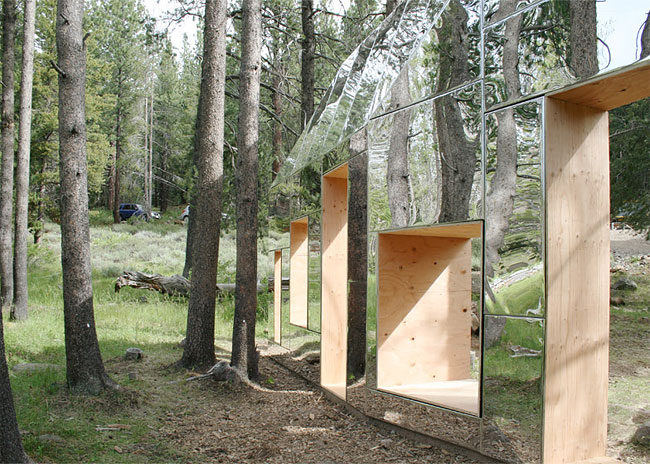 The folly has a diamond-shaped footprint instead of a straightforward rectangular plan. This means that from certain angles it appears to be paper thin. 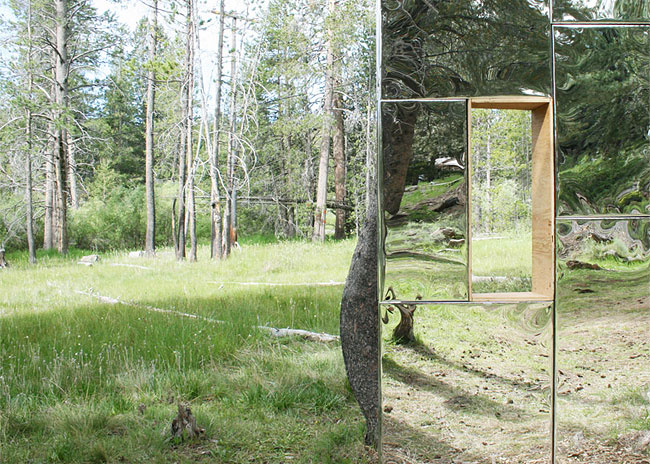 It also doesn’t contain any rooms. The doorways and windows that puncture its facade go all the way across, so visitors can walk or climb right through. 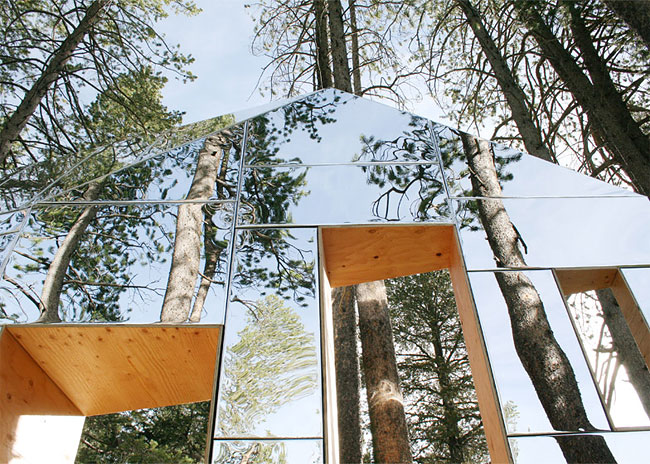 “Invisible Barn is a folly that loses its man-made architectural presence in nature but adds a novel experience and interaction to the users,” said the architects.

“The barn is shaped as a skinny and long parallelogram to elude the dense trees,” they added. “The incisions that penetrate through allow visitors to manoeuvre in, out, and around the structure.” 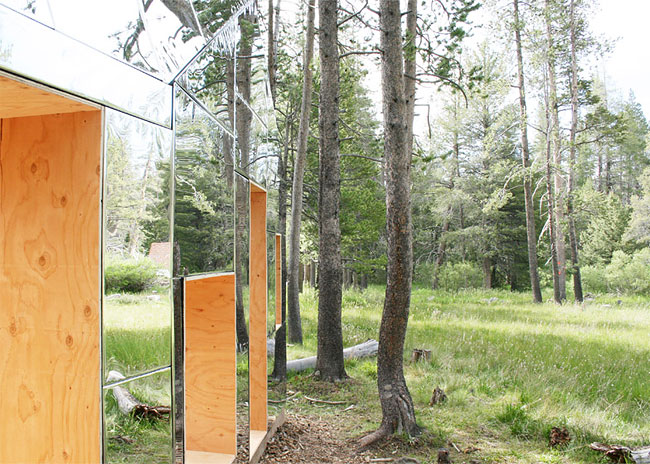 A metallic polyester film was used to create the mirrored surfaces. Unlike alternatives such as stainless steel, over 90 per cent of the material’s UV reflectivity is within the wavelength range of 200-400 nanometers, meaning humans don’t recognise it as a surface but birds do.

“Though humans do not recognise this UV reflection, it is perceivable to birds, so that prevents them from colliding into the structure,” added the architects. 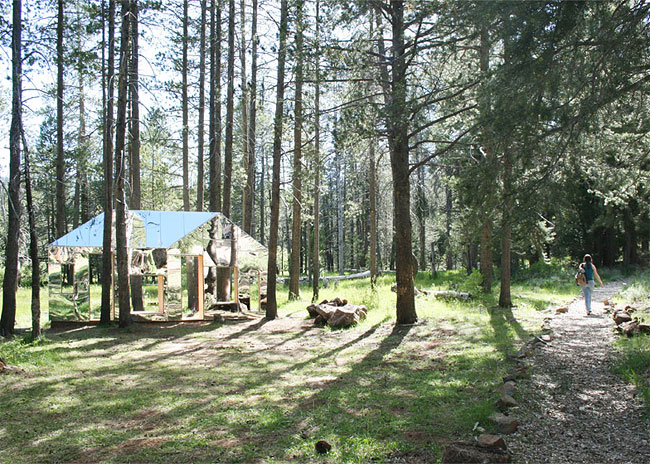 “As a static structure, the folly uses its materiality and the site context to draw a new scene derived from the existing landscape,” said the team.

“As people begin to move away, toward and within the folly, the users will slowly recognise a space within the grove that reflects, mirrors, and animates the landscape of the park.”

Green Leaves Powered Writer’s Shed By Matt Gibson Architecture + Design
Terrifying Russian Architecture Which Looks Better From Above
Grasshopper’s Dream, A Cafe With Two Giant Grasshoppers At The Train Station In South Korea
This Tiny House Has A Strange Roof But The Reason Is Genius!
HUS-1 – The Ultra Tiny House Of Your Dreams
Soong Ching Ling Statue Going up in Central China
Sculptural Steel Labyrinth at a Former Coal Mine
Incredible Photographs Of The Old Closes And Streets Of Glasgow From Between 1868 And 1877
Architects Create Concept Prison Ship That Can Hold 3,300 Tax-Avoiders In Game Of Thrones-Style 'Sky Cells'
The Magnificent Interior Of The George Peabody Library In Baltimore
Klein Bottle House By McBride Charles Ryan
Beautiful Paintings on Fallen Tree Logs Mirror Their Natural Origins
World's Biggest McDonald’s Outlet to Open in London
Container Community for Migrant Children
World’s Largest Vertical Garden Blooms With 85,000 Plants In The Heart Of Bogota
Meet Escape Traveler - A Tiny Cabin On Wheels That Can Be Moved Anywhere
The Safe House
Playscraper, a Skyscraper Composed of Tennis Courts
Cute Chinese Cargo Van Apartment
Chinese Province Spends $73M To Reproduce Century-Old 'Ancient Town'
Russian Pharaoh Puts His Apartment to Sale
How Remote Russian Places Would Look Like If They Had A Bit More Care
Indoor Pool at the Hotel Catell dels Hams
Freezing Temperatures Transform Lighthouse Into Icy Giant
among, camouflaged, folly, invisible, mirror, trees