What better way to demonstrate America’s diverse architectural styles than through the country’s most infamous family — The Simpsons?

The Simpson family residence is instantly familiar to all, yet their dwelling could have been completely different if they’d embraced one of these popular housing styles. 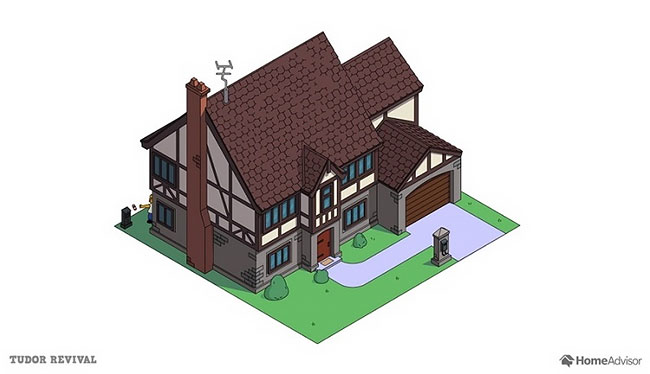 Tudor housing is perhaps one of the most recognizable architectural styles. Characterized by slanted timber beams decorating the front-facing portion of the roofing, this style often contains small groups of tall, narrow, and multi-paned windows for lots of natural light. 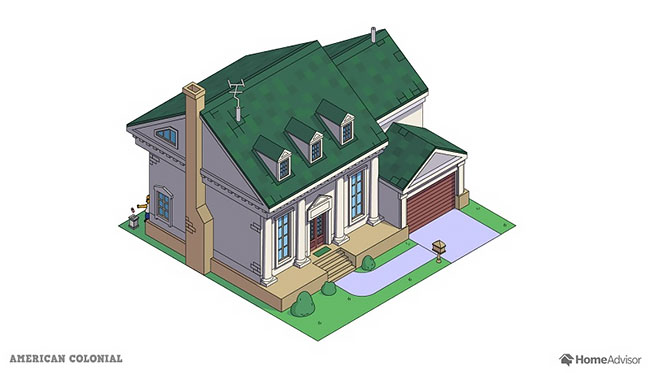 American colonial architecture is a throwback to the period in U.S. history when settlers were colonizing the continent. This style, found in both urban and rural settings, is characterized by square floorplans, symmetry, and straight rows of windows on the first and second floors. 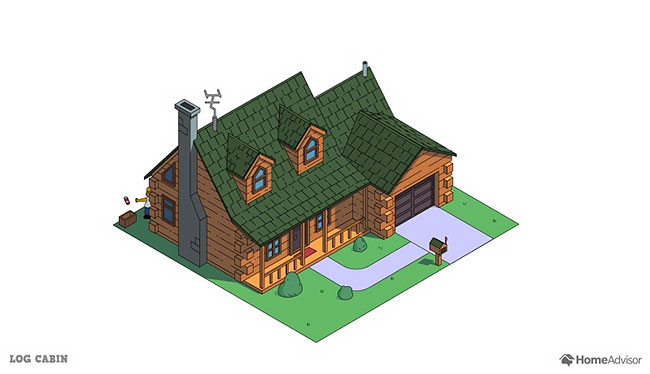 The roomy, light-filled log homes we find today aren’t quite the log cabins of the 1800s. Traditional frontier-style log homes were rectangular, contained only one room, and had at least one glass window. They were built to be sturdy and inexpensive. More contemporary takes on this style often feature grand porches, numerous windows to let in natural light, and a larger footprint. 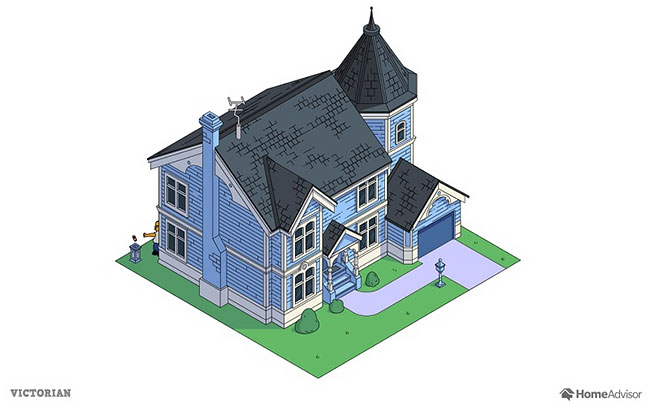 Blending several styles that were popular in the second half of the 19th century, Victorian housing is certainly not subtle. It’s based on grand designs, often distributed over several stories. Common in the suburbs of New York and San Francisco, Victorian architecture features lots of brackets, spindles, and scrollwork and remains one of the most striking styles in the country. 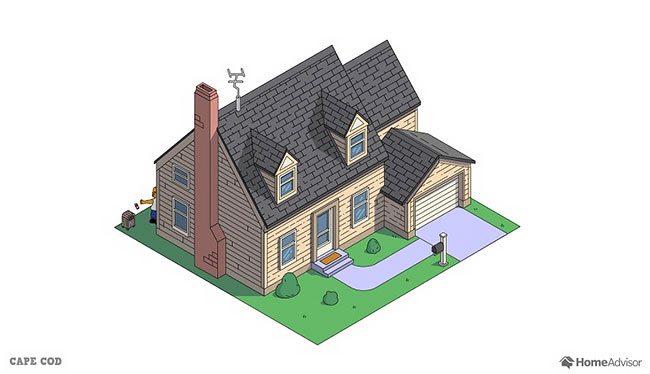 Cape Cod housing, which is associated with the New England region of the same name, is one of the most beloved styles in the country. Designed to cope with the frequently grisly weather conditions in the area, Cape Cod houses occupy a single-story and are dominated by moderately steep, durable roofs that can handle heavy snowfall. The rectangular footprint makes it relatively easy to expand to accommodate growing families. 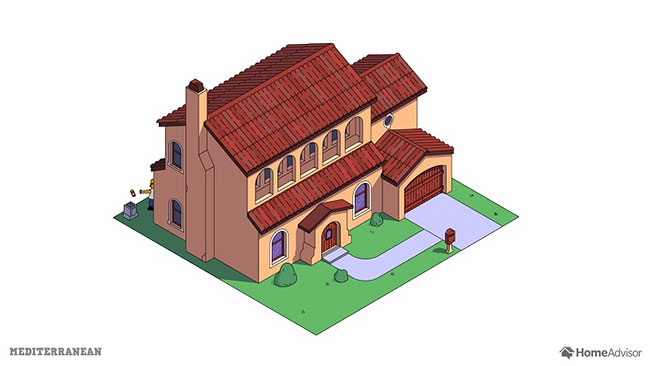 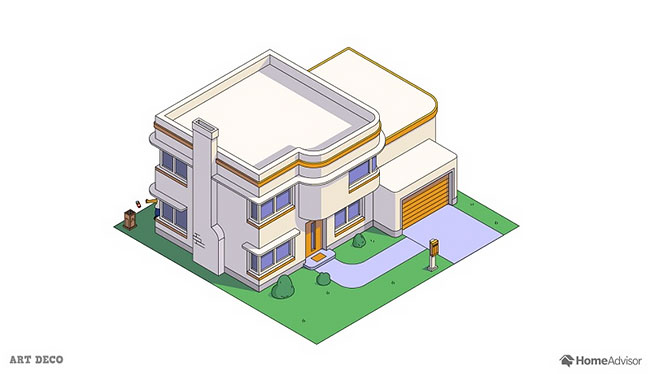 Art deco signaled the beginning of modernity in architecture. Originally from France, the style features flat roofs, smooth stucco walls, and often bold exterior decorations like zigzags, swans, lilies, and sunrise motifs. The Chrysler Building in New York is one of the most famous examples of art deco architecture, but the style can also be found throughout Miami’s South Beach area. 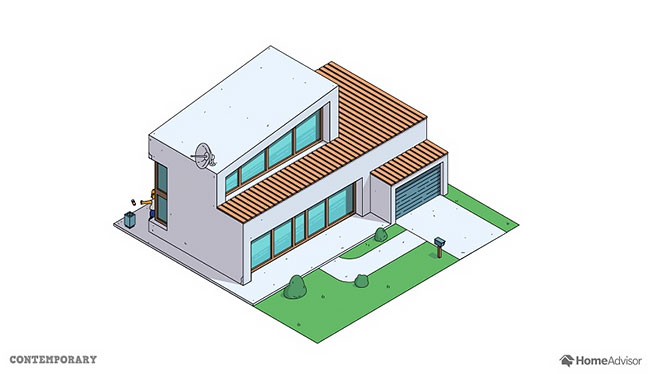 Amazing Vintage Photographs That Show The Dangers Of Constructing The Empire State Building
The Colossal Beauty Of Portland Bridges Captured By David McLaughlin
Brazilian Architect Draws Buildings Inspired By Everyday Objects
Prefab Modular Living Units From Slovenia By Coodo
Homes of the Future: Exploring the Future of Modern Homes
Create Your Own Hobbit Hole With The Cosy Green Magic Homes That Can Be Adapted To Your Needs
The World's Highest Lego Tower
Probably, The Most Cozy And Beautiful Toilet In The World With Views Of A Norwegian Waterfall
Tiny Church On A Tiny Island In Russia Gets More And More Beautiful Each Season
Luciano Pia’s Incredible Urban Treehouse Protects Against Air And Noise Pollution In Turin
Shakhti 360 Leti: Luxury Hotel in Himalayas
Unique House for the Atomic Age from 1953
This Transparent Bubble Tent Lets You Sleep Underneath The Stars
This Chinese Farmer Built A Two-Storey Space Shuttle Replica On The Roof Of His House
Latin American Architecture Firm Gómez Platero Has Unveiled a Design for A Circular Monument in Uruguay to Remember Coronavirus Victims
Brutalist Breuer Building Owned By IKEA Could Become Hotel In Connecticut
Shanghai Tower Cranes Come Down
Inside The Crumbling Luxury Mansions Left Abandoned On London’s Billionaires’ Row
These Beautiful Photos Of Subway Stations Will Transport You From Your Daily Commute
See How This Row House Became The Best On The Block, With The Use Of One Simple Material
Architects Adds Treetop Cabin With Stargazing Net To Sweden's Treehotel
Large Scale Surreal Architectural Collages By Anastasia Savinova
Facebook Reveals Expanded California Campus Designed By Frank Gehry
Facebook's New Server Farm in Sweden
architectural, popular, reimagining, simpsons, styles

This Feline-shaped Kindergarten Is The Cat’s Meow
See the Ancient City of Pergamon in 360 degrees
This UFO Spaceship McDonald’s Used to Exist in Alconbury, England in the 1990s
Legendary London’s Thinnest House is for Sale
Most Expensive House in Brooklyn for Sale
These Odd Bubble Houses Are Actually Real Homes In The Dutch City Of Hertogenbosch
Palais Namaskar: Luxury Hotel & Spa in Marrakech
World's Tallest 48-Meter Buddha Statue in Eastern China
This Might Be The Coziest Bus Stop In Britain
This Super Tiny Cabin Lets People Sleep In The Mountains Under The Stars
2007 ‒ 2022 by Design You Trust. Proudly hosted by WebHostingBuzz.
Privacy Policy · Terms of Service · Content Removal Policy ❤️ 🇺🇦