An infinity pool will form the roof of this cavernous house designed by Athens studio Kois Associated Architects for the Greek island of Tinos. 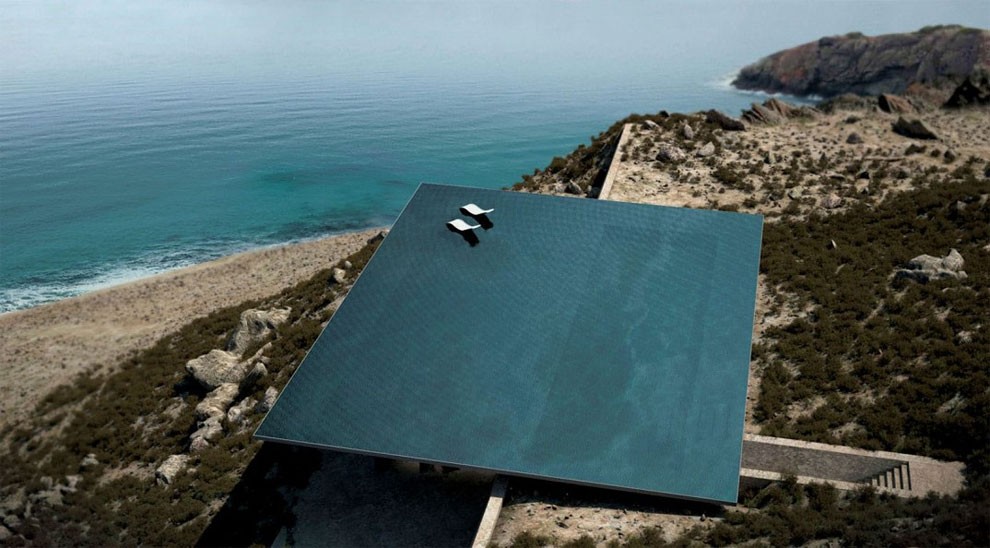 Designed for the rocky terrain that makes up the island’s south-west coastline, the Mirage house is conceived by Kois Associated Architects as “an invisible oasis” where residents can enjoy panoramic views over the Aegean Sea without giving up their privacy. 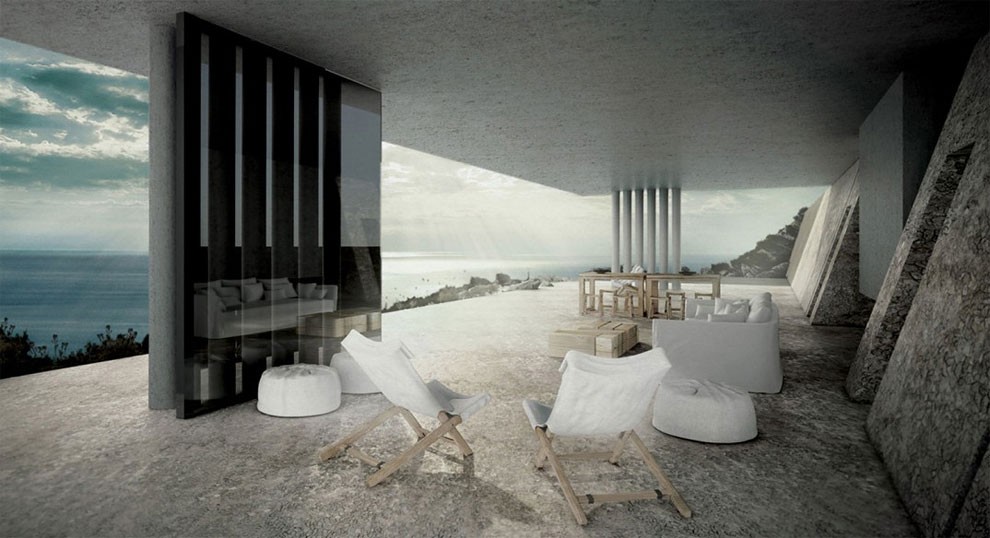 The team decided to bury part of the building in the landscape and then create a large open-air living room in front. These will all be sheltered beneath the rooftop pool, which will act as a huge mirror to help the building camouflage with its surroundings. 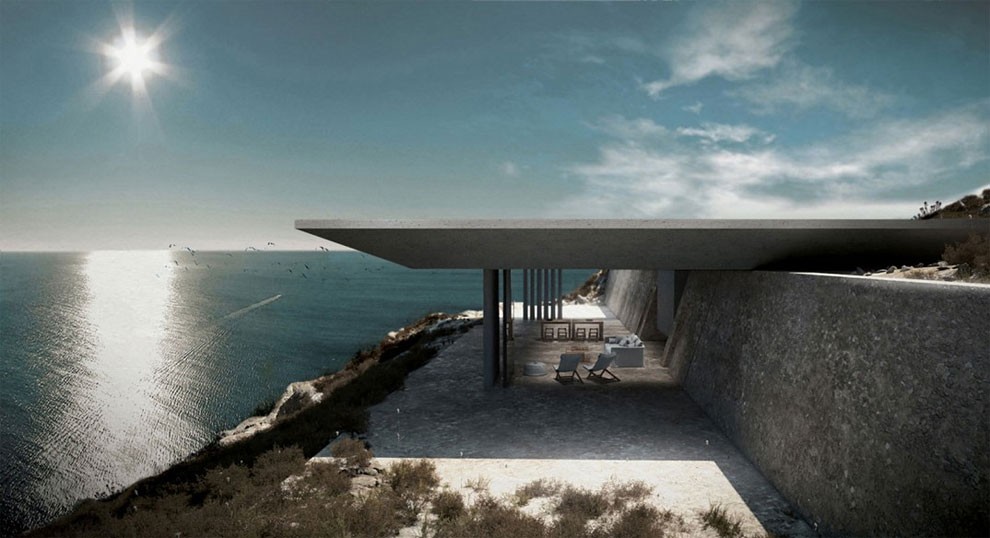 Some of our clients’ major concerns were visibility and privacy,” project architect Nikos Patsiaouras told Dezeen. “At first we were concerned with the concept of invisibility. We asked ourselves ‘How can you make a building disappear?’. Our response was to mimic elements of the landscape.” 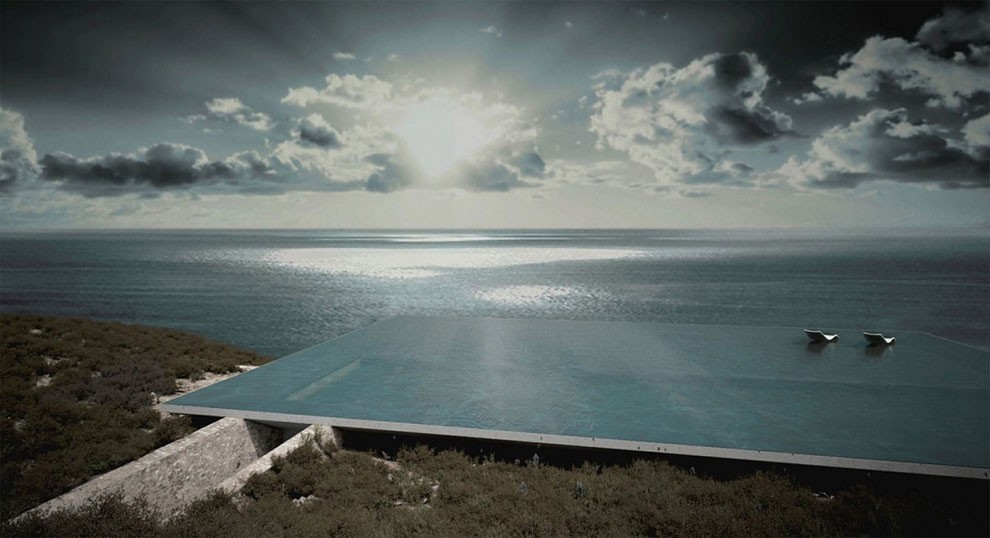 “The visual effect of the mirroring of the pool in combination with the concept of invisibility brought to mind the visual phenomenon of the mirage, from which the project was named,” he said. 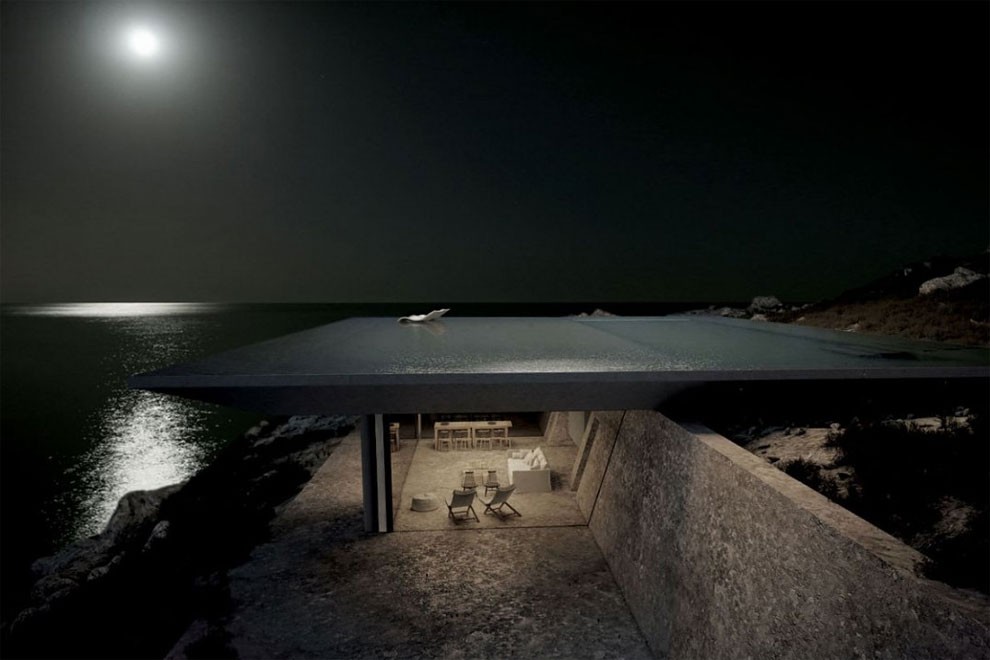 Dry stone walls will surround sections of the interior and also frame the building’s entrance. These are designed to reference the traditional walls that can be spotted all over the scenic island landscape.

Patsiaouras explained: “The elements that stirred our imagination most were the linear drywall constructions that articulate the landscape and the scattered shallow concrete water-reservoirs used for agricultural purposes.”

The team also plans to add rammed-earth walls around the rear of the building, with layers of vegetation that will help to create a cool internal environment. 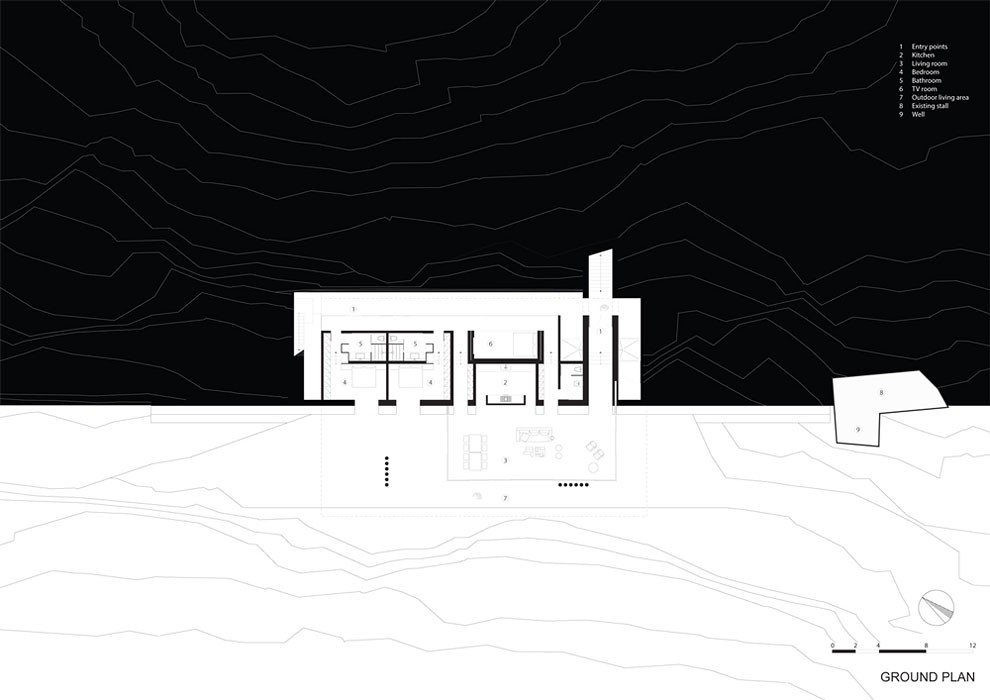 The house will be located on a natural plateau, allowing for a simple single-storey layout. This will include three bedrooms and a separate kitchen, as well as the outdoor living room. 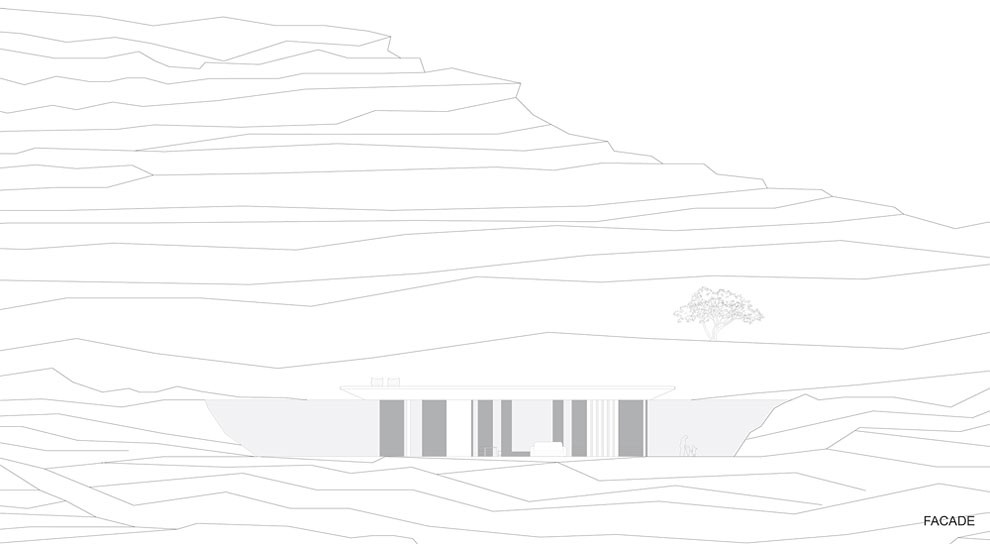 First Look: Google's New, More Subdued Headquarters
Studio Schicketanz Have Designed A Modern Dog House With A Green Roof
Extraordinary Design Shelter That Looks Like A 'Flintstones House', And No One Wants To Buy It
See How This Row House Became The Best On The Block, With The Use Of One Simple Material
Mortsafe: Protection from the Living Dead
Associated Press Photographer Daniel Ochoa de Olza
Just Before It Was Destroyed By Fire, These Amazing Photos Captured The Cliff House In The Early 1900s
Futuristic Architectural Dreamscapes by Javier Valero
This House Sings Like A Saxophone At Night
Legendary London’s Thinnest House is for Sale
This Apartment Has A Full-Size Supercar Pagani Zonda As A Room Divider
Bioclimatic Architecture
"Eighth Wonder Of The World": The Sacred Orthodox Rock Church Of Saint George In Lalibela, Ethiopia
Secluded Timber Cabin on Stilts is a Creative Escape for Writers
This McDonald's Is Built Into An Old Colonial Home
The Secret Life Of Hamsters And Hedgehogs: Humorous Photos Of The House Pets By Elena Eremina
The City that Builts into the Rock
This Serene Outdoor Sanctuary Has Sculptural Concrete Seating
The Floor Of An Historic Church Transformed Into A Reflective Pool Of Multi-Colored Orbs
Longest Glass Bridge Ever Just Opened in China and Tourists are Terrified to Walk It
Luciano Pia’s Incredible Urban Treehouse Protects Against Air And Noise Pollution In Turin
Billion Euro House in Dublin
PIXERS: Your Walls & Stuff
Create Your Own Hobbit Hole With The Cosy Green Magic Homes That Can Be Adapted To Your Needs
architects, associated, house, infinity, mirage