A motorcyclist found a tiny injured kitten that needed a lot of help at a truck stop, he decided to help the little guy, tuck him in his vest and continue on his cross country trip while taking care of the kitten. 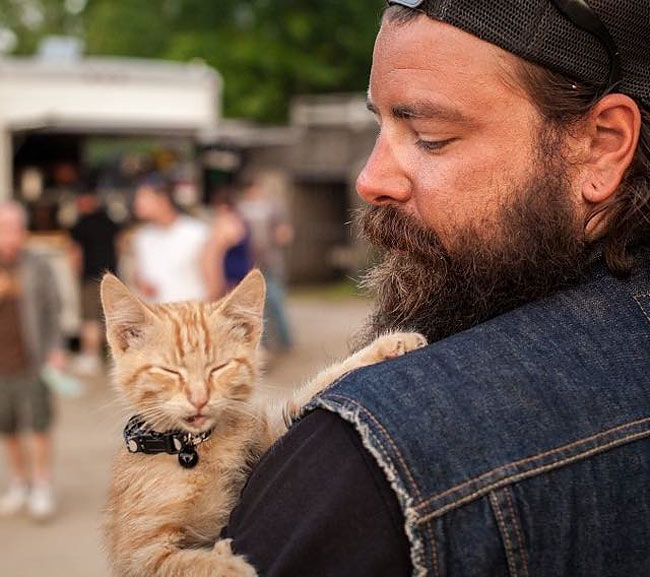 Pat Doody has been riding cross-country (from Nevada to New Jersey) with a little kitty snuggled up to him since he rescued him. His furry sidekick has quite an unbelievable story. 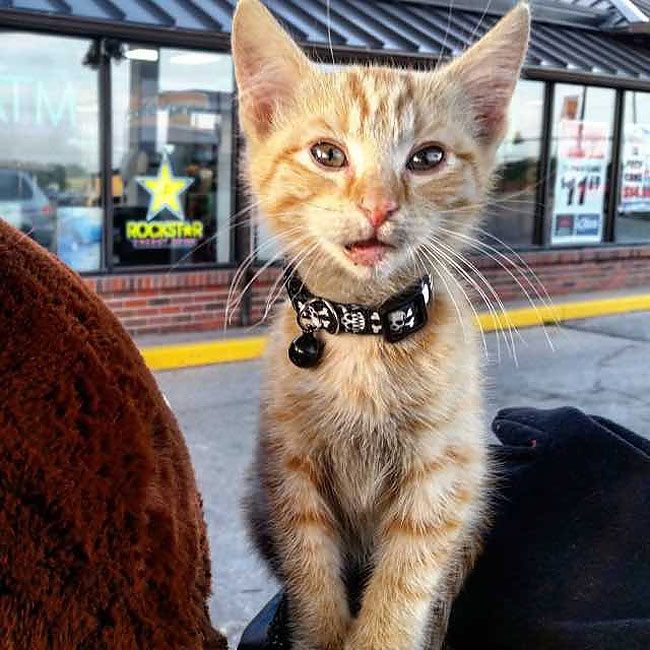 While he was in Nevada at a truck stop getting gas, he found the kitten who was crying for help. “He was pretty badly burned, so I picked him up and tucked him inside my vest. We’re feeding him regularly now, so he’s doing better, even though he’s sort of living on the road until we get home,” he told Revzilla. 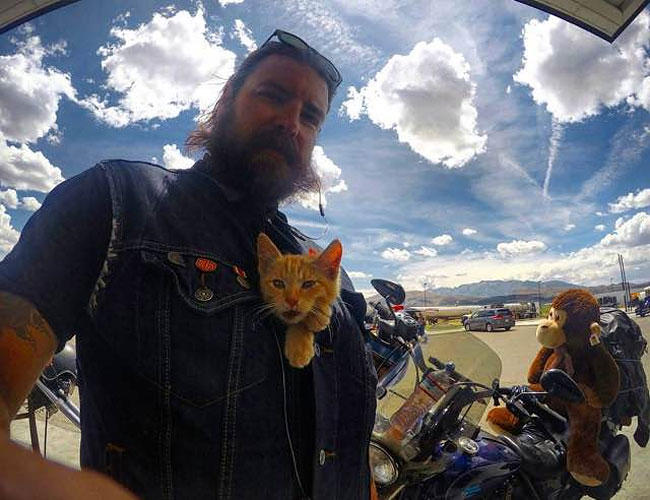 “His burns are pretty much all healed up except for the little spot on his lip… We’ve been keeping it clean and using neosporin. It looks a lot better and doesn’t seem to be bothering him.” 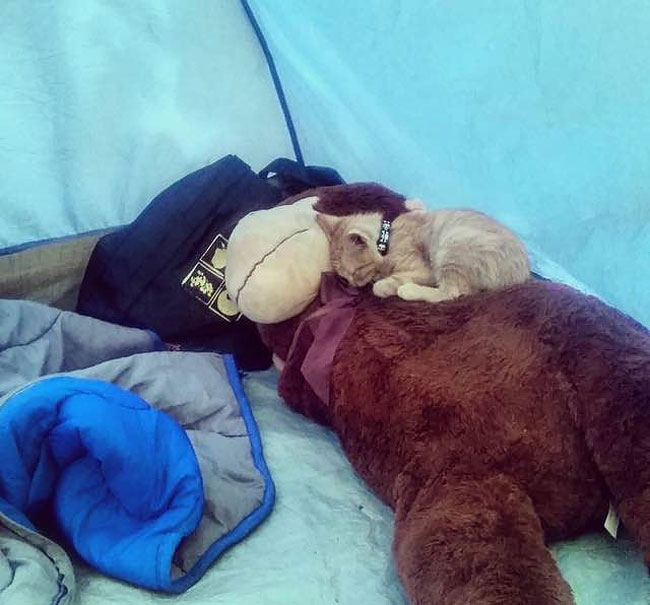 After a long day of playing, Party Cat is all tuckered out on his monkey that they bought on the road.

“He’s so chill. He just hangs out in my vest when we get on the road. I’ve never met a cat so calm.” They named the little buddy Party Cat.” 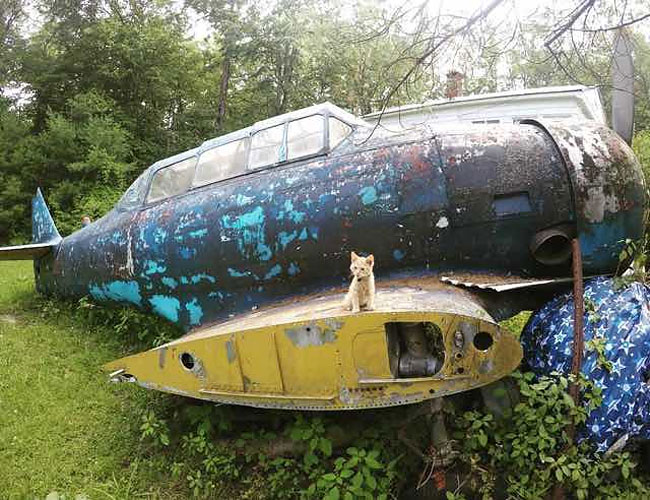 Party Cat got to explore an abandoned airplane. 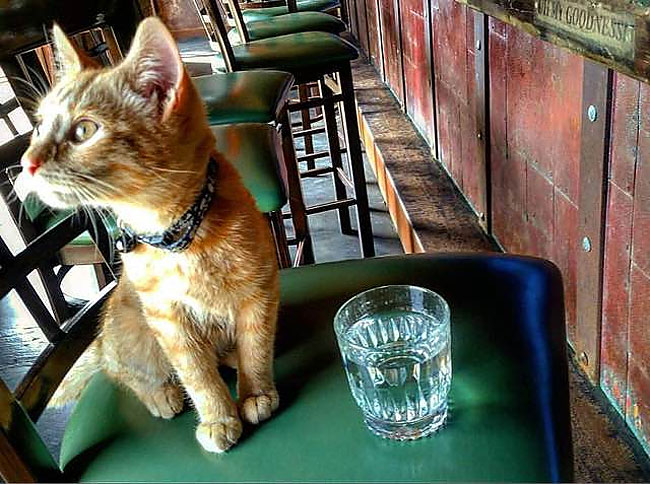 Enjoying some brunch with his human dad. 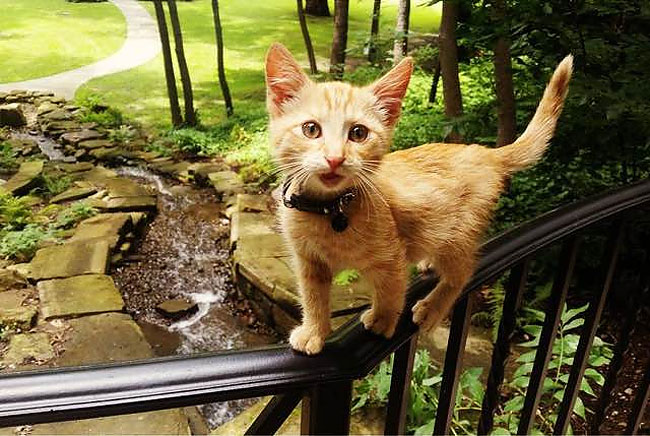 Party Cat is loving the scenery! 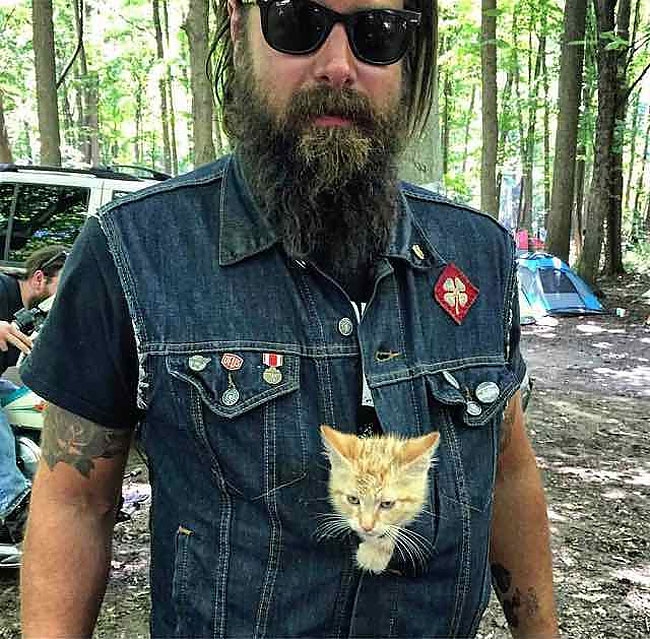 When he needs a break from all the playing and traveling, he goes inside Pat’s vest for some cuddles or a cat nap. 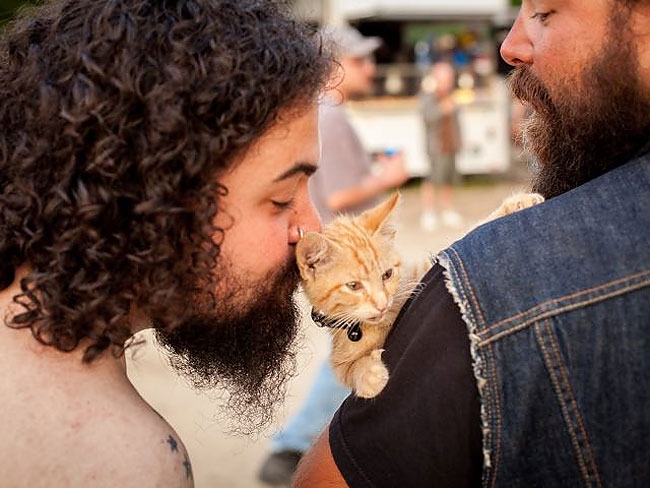 He’s a very happy cat now and has many people who love him to bits.

This Cat Is A First-Rate First Mate
A Beautiful Scowling Curly-Haired Cat
Gorgeous Photos Of Cats Taken By Marianna Zampieri
80,000 Budgies Form A Tornado Over A Waterhole In Australian Outback
Pet Photographer Photographer Fell In Love With Foxes After Taking Their Photos In Her Studio
Dog Is Hiding In Every Photo Like a Real-Life "Where's Waldo"
A Young Elephant Calf vs Buffalo Bull in South Africa
"Cats In Hats"
Poop Factory: The Best DIY Halloween Costume For Your Dog
The Frog and Snake
These Close-Ups Of Snails In A Rainstorm Are Beautiful
A Black Cat Interrupted A Football Match And Unsurprisingly Refused To Leave
"Under-Cats": Photographer Andrius Burba Captures Photos Of Cats From From Underneath In Colorful Backgrounds
Cat Fashion Show at the Algonquin Hotel
Unwanted Cat Becomes This Little Boy’s Guardian, Following Him Everywhere
Elderly Animals By Isa Leshko
Cat Survived Flooding In Floating Basin, Saved By Rescuers
Two Starving Dogs Left to Die Saved by Police. Their Transformation will Amaze You.
Surfing Penguins
Russian Illustrator Reimagines Different Coffees As Cats
Daredevil Photographer Recreates Iconic "Jaws" Movie Poster
Hundreds Of Dogs And Puppies Live In Chernobyl—And You Can Adopt One
No One Will Know This Is a Space-Age Napping Pod For Your Cat
This Is The Most Ridiculously Fashionable Feline Ever
biker, continues, injured, kitten, saves, while