Deer Collides With Cyclist During A Triathalon 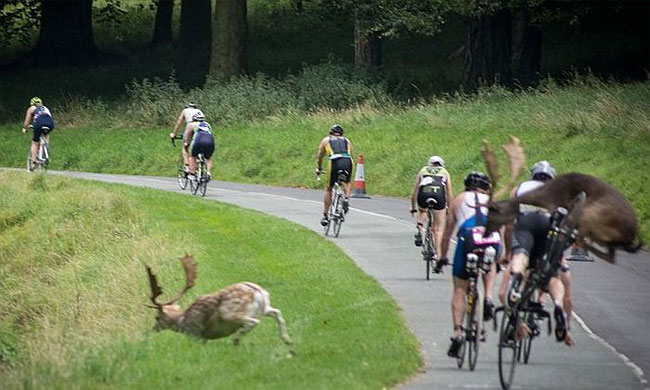 Shane O’Reilly from Blackrock in County Dublin, only had 10km left of the road race when a deer collided with him. He told the press that the collision caused his helmet to be cracked, but he still managed to get back up and finish the race. 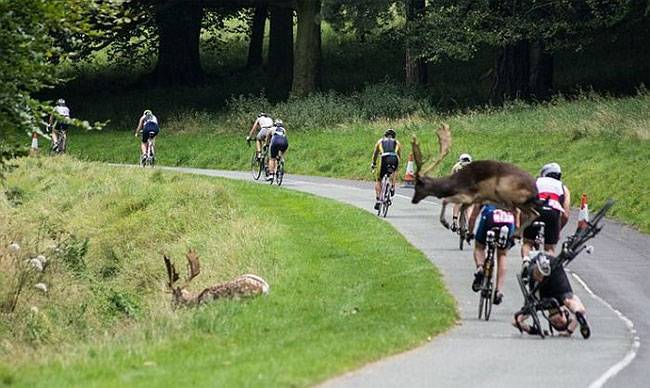 Photographer Erik Scraggs was at the event when he managed to capture the extraordinary moment. He said he never thought the stag would “try and leap over the cyclists”. 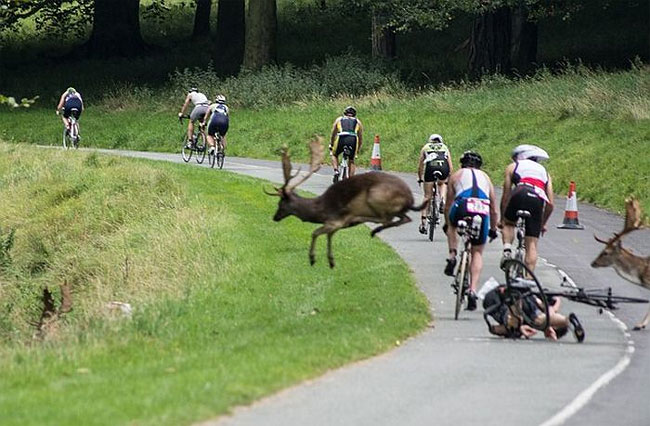 “As I was standing waiting for a group of cyclists to approach, I heard a rustling behind me and I turned to see a couple of stags running parallel to the road,” he told the BBC.

This Thai Photographer Captures Aquarium Fish Like No Other
South African Rhinos Relocated to Escape Poachers
Swimming with Alligators
Poop Factory: The Best DIY Halloween Costume For Your Dog
These Hilarious Cats Look Like Furry Catbuses Come To Life
Is This The Greatest Account On Instagram?
Samsung Everland Zoo in Photos by In Cherl Kim
Someone Replaced The Dinosaurs In Jurassic Park With Ferrets, And It’s The Remake You Didn’t Know You Wanted
Puppies Around Fire Pit For Warmth
Artist Paints Hyper Realistic Animal Portraits That Place Your Own Pet In Historical Settings
Giant Eyeball Found on the Beach
Nature’s Quiet Assassin: Astonishing Pictures Capture Moment Jaguar has Caiman for Lunch
Couple Create Rocker Denim Jackets for Dogs (and Cats!)
Naughty Cat Remains Completely Unbothered After Breaking A 2,432-Piece Doraemon Figure Its Owner Spent A Week Building
Maru The Cat Tries On Different Wigs By Accident After His Owner Builds A Box Trap
Photographer Leila Jeffreys Captures The Diverse Beauty Of Naturally Colorful Birds
Orangutan Brothers Damai and Rizki
Adorably Studious Cat is Adopted by a High School, Issued His Own ID Card
The Seventh Annual Running of the Wieners – Oktoberfest in Cincinnati
Frog Perched on the Crocodile
Little Wild Boar Thinks He’s A Cow So Moves In With German Cow Herd
Can You Count How Many Seals There Are Selling Seashells By The Seashore?
Did You Know There’s an Annual Duck Fashion Show In Australia?
Meet This Colorful Australian Peacock Spider
collides, cyclist, during, triathalon