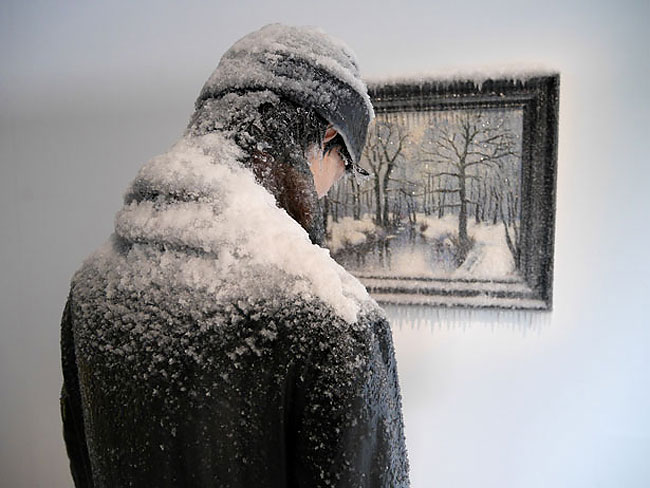 If an artwork could ever give you a chill, it’s a sculpture by Laurent Pernot. His piece titled Self Portrait Face to a Winter Canvas features a life-sized replica of the Paris-based artist as he stands in front of a framed snowy scene. 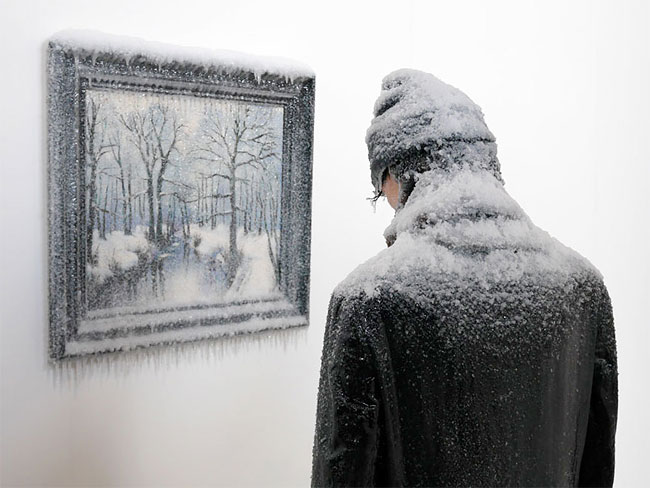 While that might sound innocuous, the artwork has a strange and surreal twist—the wintery mix is not just contained in the picture. Faux snow coats the figure and wood frame, as icicles dangle from the tip of his nose and hat. 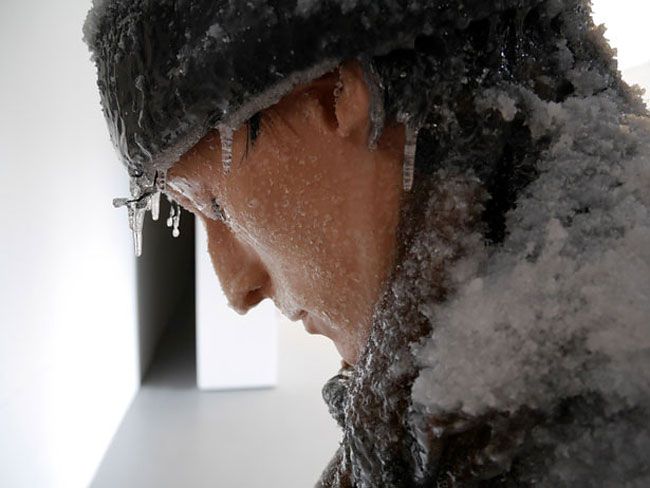 Pernot has installed his piece in a gallery setting, and the surrounding indoor environment doesn’t have the same frigidness. 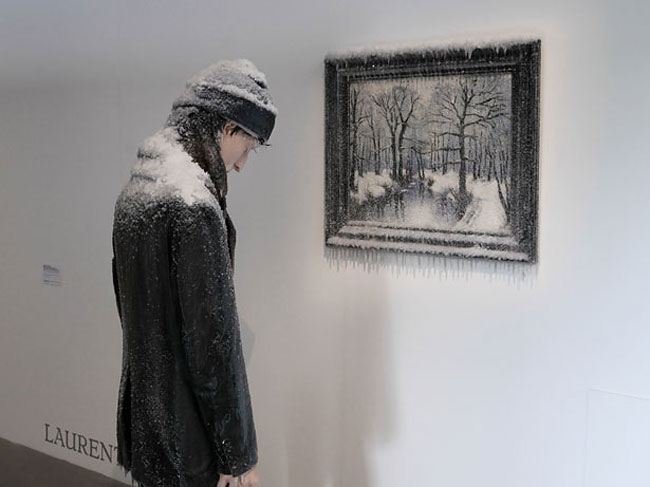 It’s as if the snow and ice are merely figments of the statue’s imagination, showing us that mentally, he’s off in a much colder place. 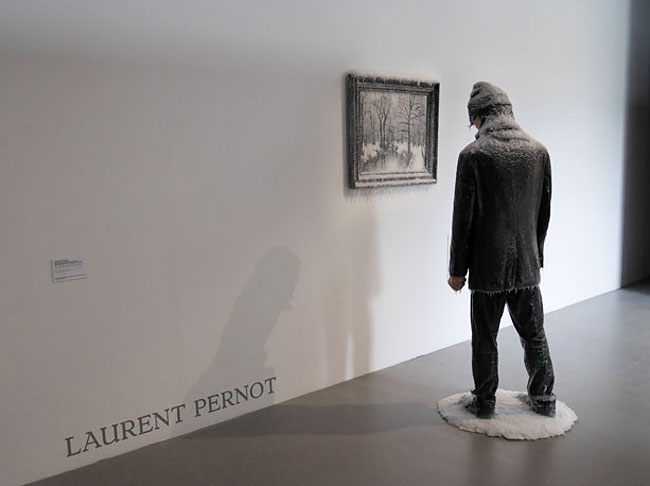 This idea, that reality and fantasy can coexist, is at the core of Pernot’s work. “His creations recurrently revolve around the notions of the visible and invisible, time and the confusions of memory,” his website states. Self Portrait is the visual representation of mind and matter. 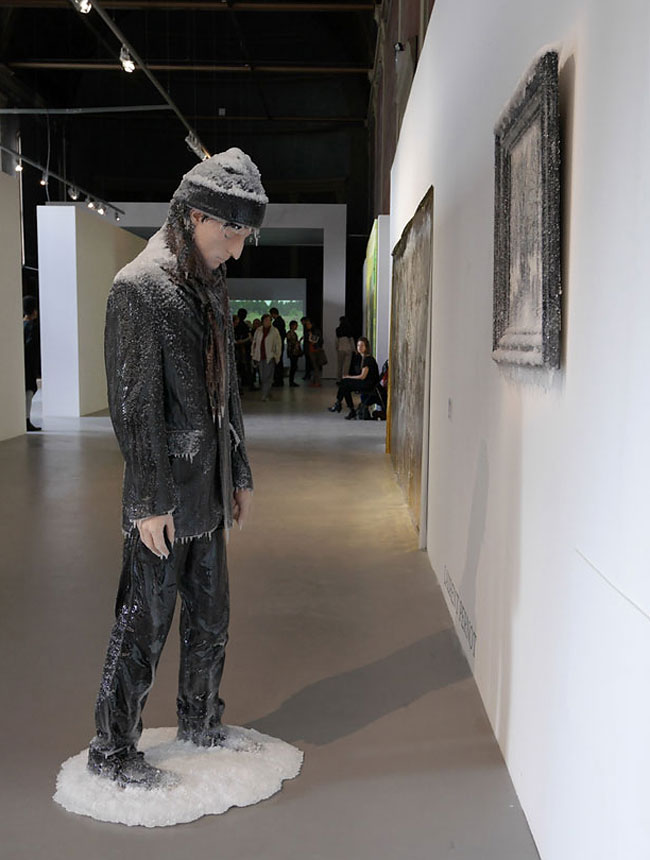 Via My Modern Met, This Isn’t Happiness

"Build The Future" - Lego’s Brilliant Print Ads From The Cannes Festival
37 Brilliant Illustrations That Show Daily Life In A Parallel Universe
What Your Beer Says About You
The Body-Painting Illusions of Gesine Marwedel
Artist Replaces Weapons With Flowers In Historic Pictures
Stuck In The Real World: Characters From Cartoons And Movies Placed In Real Photos
With Fire On Their Blades: The Dark Fantasy Character Art Of Eve Ventrue
"The Horror, The Horror!": Dark And Disturbing Paintings Of Death And Disease By Richard Tennant Cooper
Artist Uses Her Hands As A Canvas To Show Her Hidden Worlds
Artist Imagines What Russian Skies Would Look If They Were In 8-Bit
Malaysian Artist Ivan Tao Paints Subjects With Great Atmosphere To His Pieces
Surrounding Reality: The Superb Metro Cyberpunk Photo Manipulations Of KellaX
Surreal And Fine Art Portrait Photography By Konrad Bąk
Hilarious Drawings Of Celebrities Slapping Trump
This Artist Is Asking Street Artists To Paint 'World Cows' Around The World
These Beautiful 16th Century Watercolors Illustrate the History of Comets And Meteors
Canadian Artist Transforms Herself Into Superman
Beautiful Illustrated Tattoos by Jade Tomlinson and Kev James
Black & Light: A New Immersive Painting Inside An Inflated Canvas
"About What Never Happened": The Superb Artworks of Dmitry Listov
Son Studying Abroad Sends Mom Cutout Of Himself, Regrets His Decision Immediately
Ocean Eyes: An Illustrated Art Project by Jane Chen
This Is The Most Hilariously Dark Instagram Account Ever
Child Prodigy Aged 13 Creates The Most Amazing Nature-Inspired Drawings You’ve Ever Seen
alongside, freezes, painting, portrait, sculpture, surreal

This Artist Illustrates Adorable Glowing Monsters From Outer Space
François Dourlen Blurs The Line Between Popular Culture And The Real World With His iPhone
Europe's First Underwater Sculpture Museum
Hilariously Polite Graffiti
Father's Game Guides Are Amazing
Artist Wil Hughes Shows How Pop Culture Icons Would Look In Real Life, And It Will Give You Nightmares
The Wonderful World Of Fantasy And Feeling Of The Artist Marcel Van Luit
"Heaven's Hell": The Book Of Afterlife Adventures By Anthony Jones
Not that Way: The Superb Concept Art Works of Oliver Ryan
"Don't Think About The End At The End": Weird Advertising For An Orthodox Cemetery
Source of inspiration since 2007. Proudly hosted by WebHostingBuzz.
Privacy Policy · Terms of Service · Content Removal Policy 🇺🇦 ❤️