September 23-24: These Days in Photos from the Past 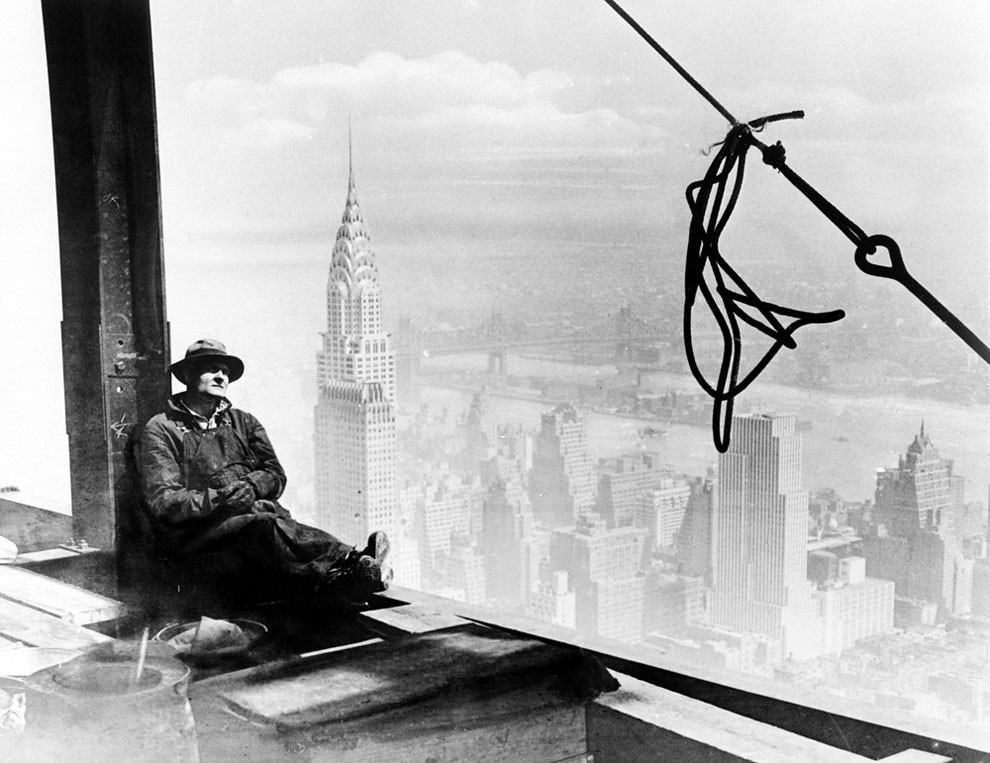 A steel worker rests on a girder at the 86th floor of the new Empire State Building during construction in New York City, September 24, 1930. The tower of the Chrysler Building can be seen in background, left. (Photo by AP Photo) 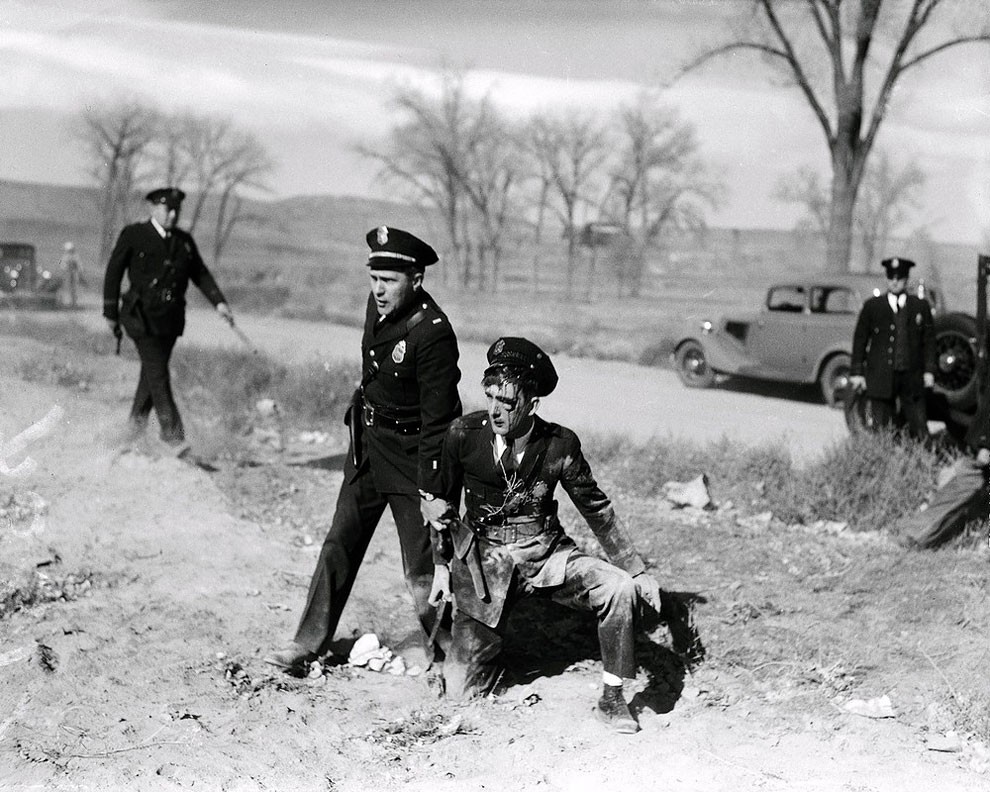 A fellow officer comes to the aid of injured patrolman C.V. Satt, who was pelted with rocks and beer bottles during a clash between police and relief demonstrators in Denver September 23, 1935. (Photo by Henry G. Eisenhand/AP Photo) 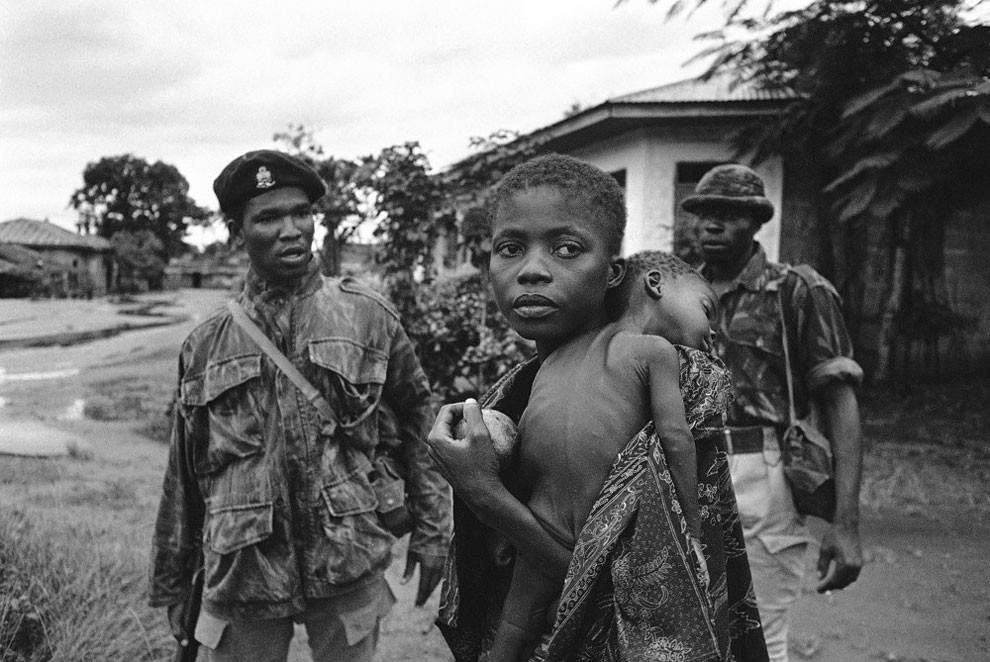 An Ibo woman refugee, carrying her dead child over her shoulder, appears not to notice the shouts of Federal Nigerian soldier telling her to get to the camp for refugees, as she walks through street after Owerri had fallen to federal troops over the weekend, September 23, 1968. (Photo by Dennis Lee Royle/AP Photo) 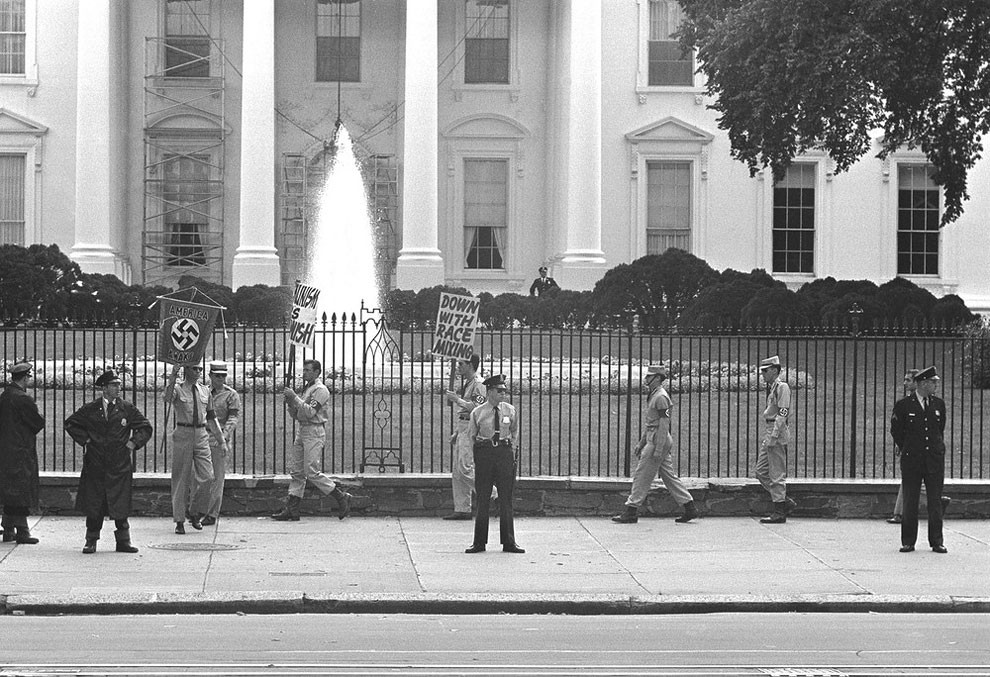 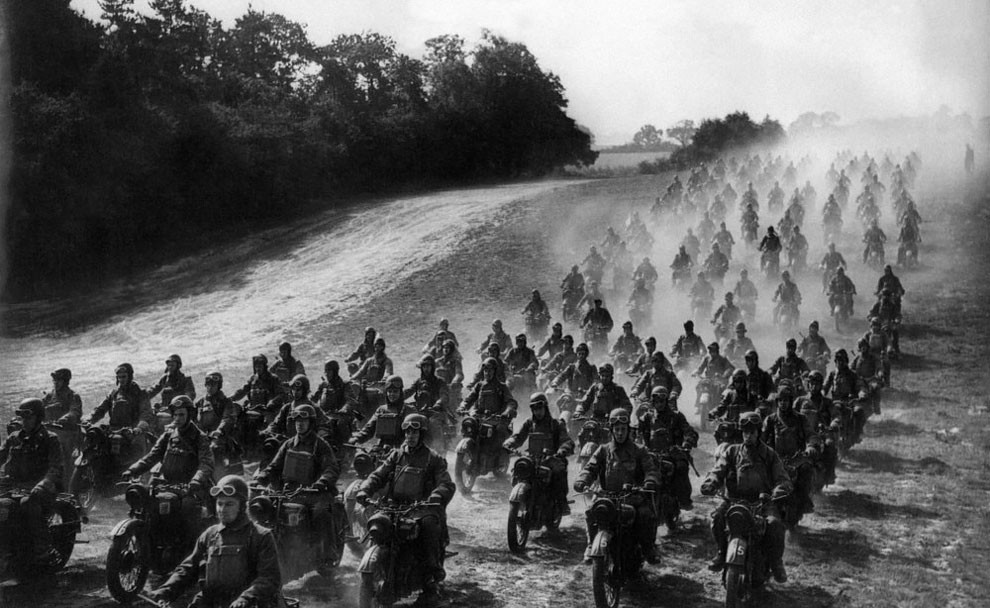 Large numbers of army motor-cyclists on powerful motor-cycles and all armed with Tommy-guns are now an important part of the British Army. Some of the scores of motor-cyclists, moving across country in formation in the Eastern Command, September 23, 1941, taking part in an exercise. (Photo by AP Photo) 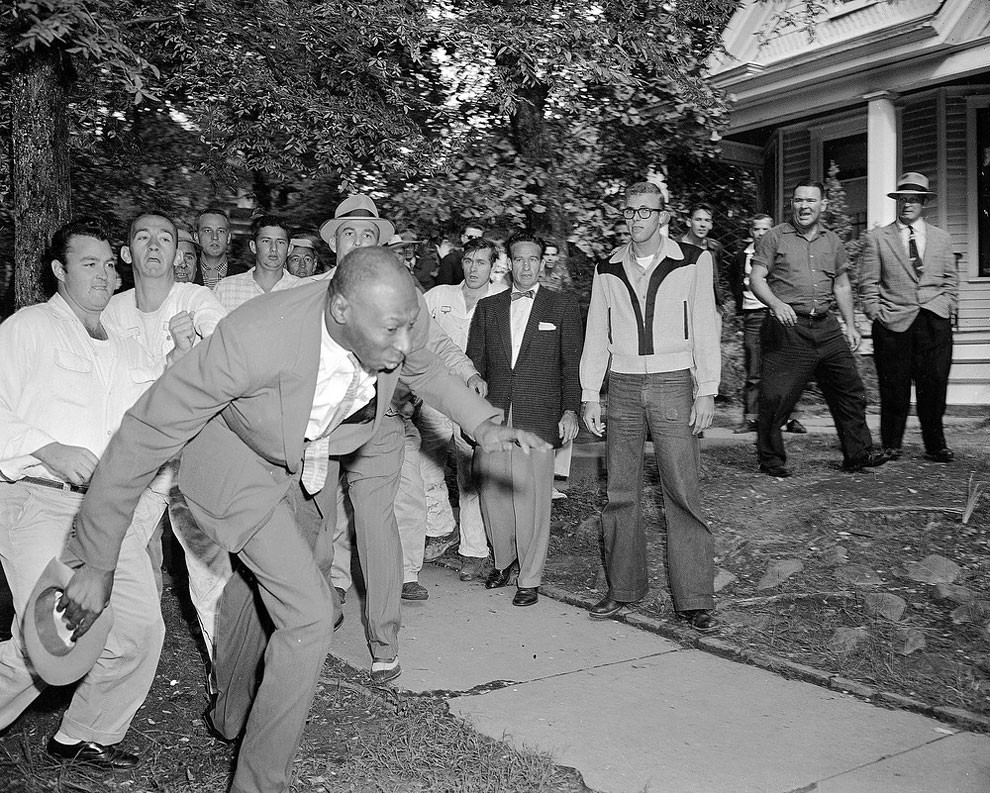 A reporter from the Tri-State Defender, Alex Wilson, is shoved by an angry mob of white people near Central High School in Little Rock, Ark., September 23, 1957. The fight started when nine black students gained entrance to the school as the Army enforced integration. (Photo by AP Photo) 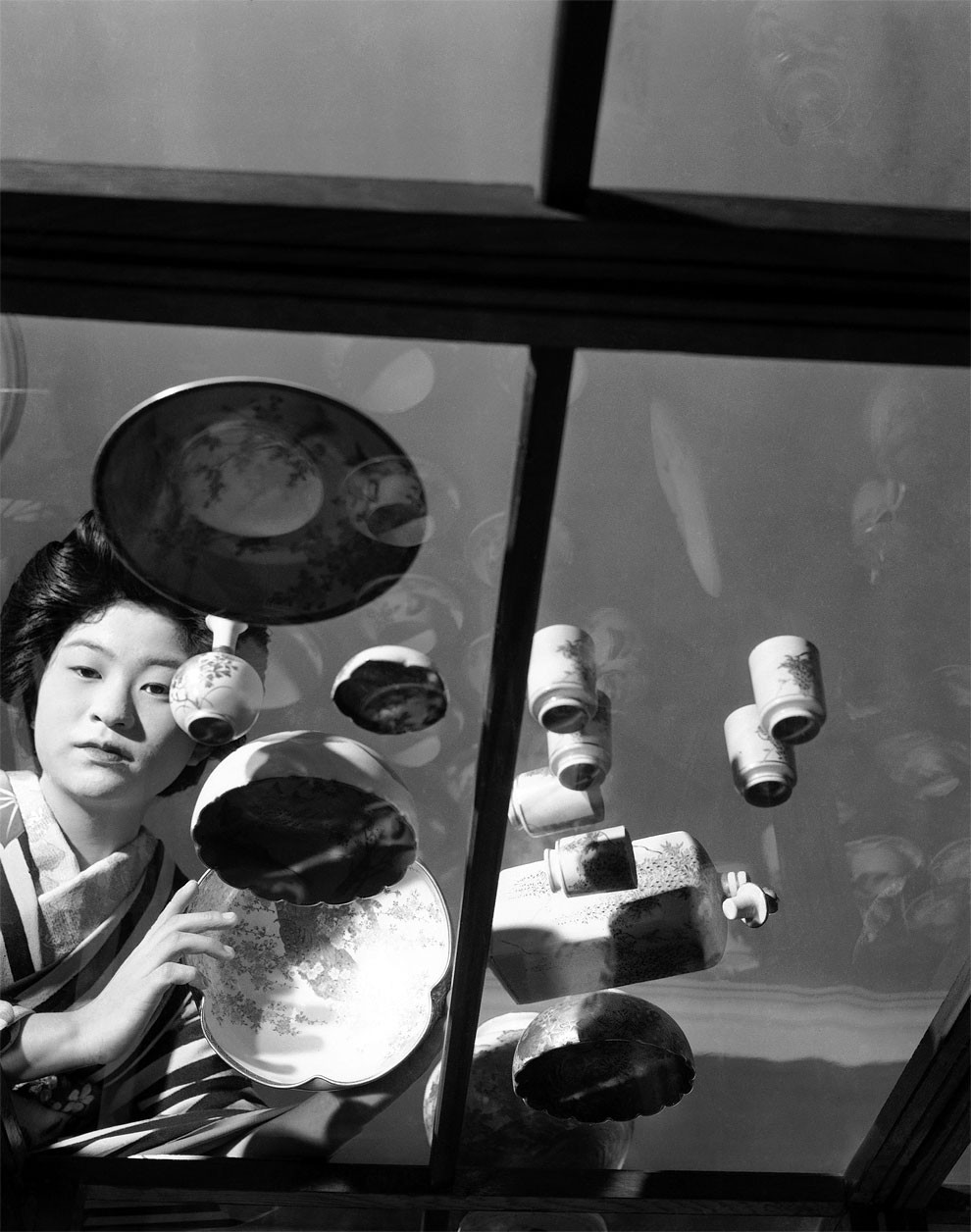 Kyoto has become the center of the Satsumaware industry. Part of the display case at the factory, in foreground a tea set with cake plates and in the background the girl looking at a demi-tasse set at the Kotobuki Pottery factory in Kyoto, Japan on September 23, 1948. (Photo by AP Photo) 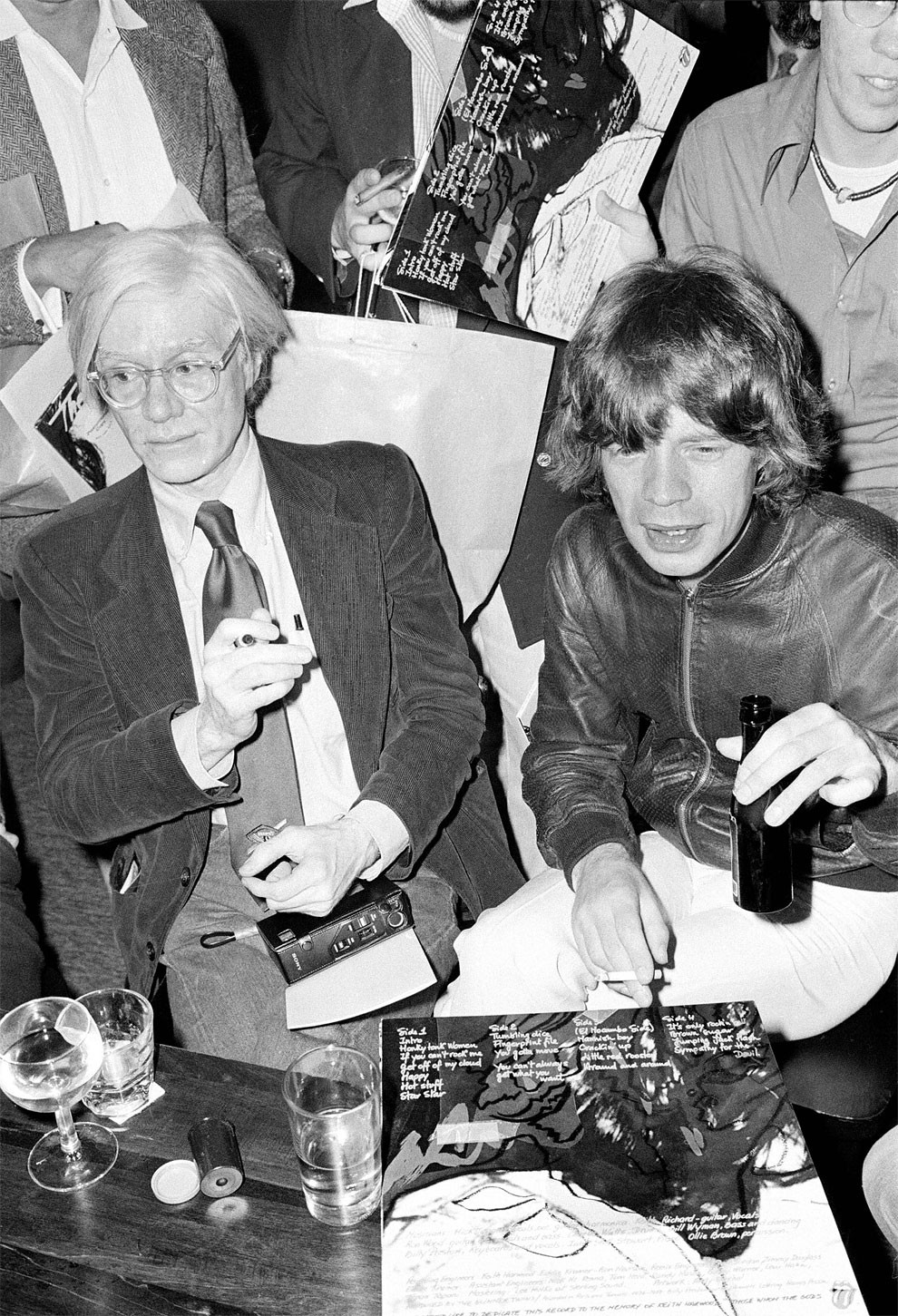 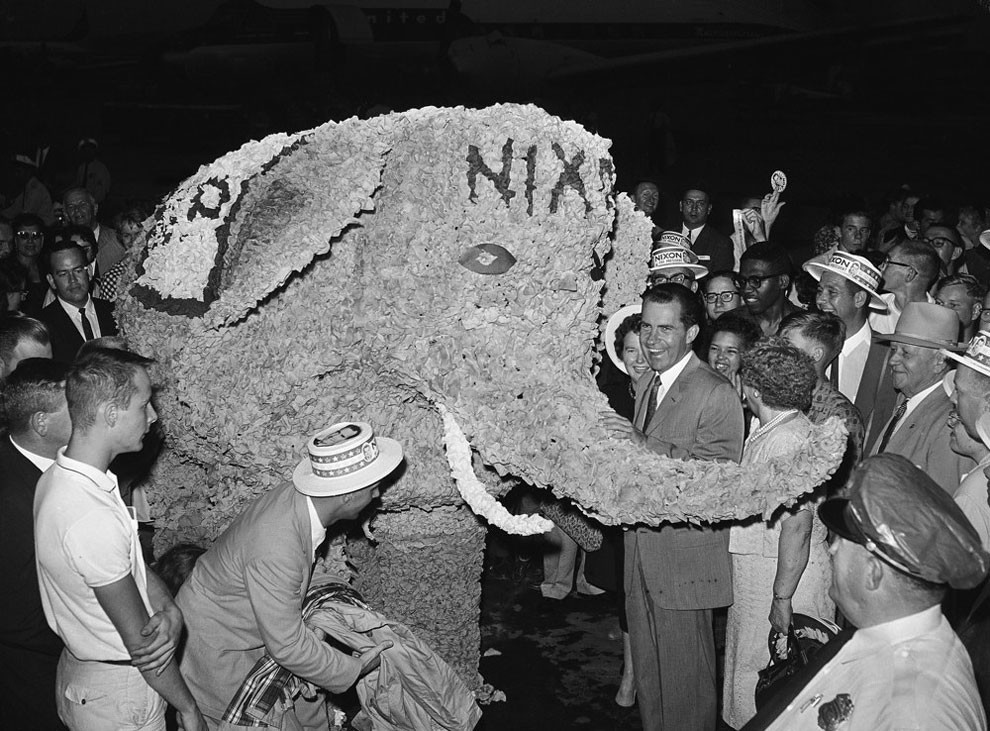 A crepe paper elephant draws a laugh from Vice President Richard Nixon during his campaign stop on September 23, 1960 in Kansas City, Mo. He came here from Sioux Falls, S.D. Four men, inside maneuvered the elephant. (Photo by AP Photo) 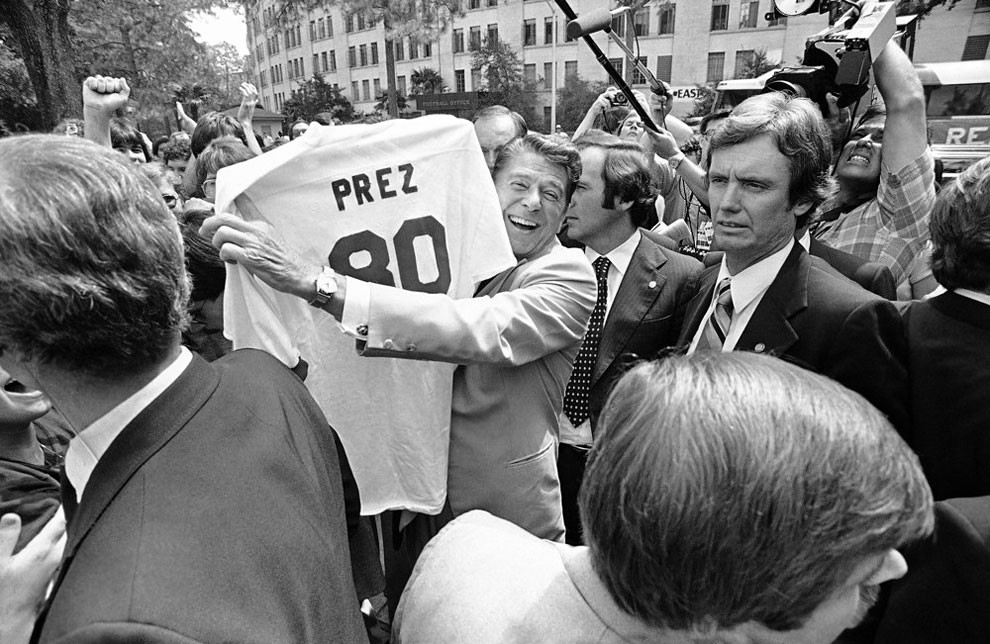 GOP presidential candidate Ronald Reagan holds up a “Prez” football jersey presented him by someone in the crowd in Baton Rouge, Louisiana, Tuesday, September 23, 1980. Regan made and address on the campus of Louisiana State University. (Photo by Charles Harrity/AP Photo) 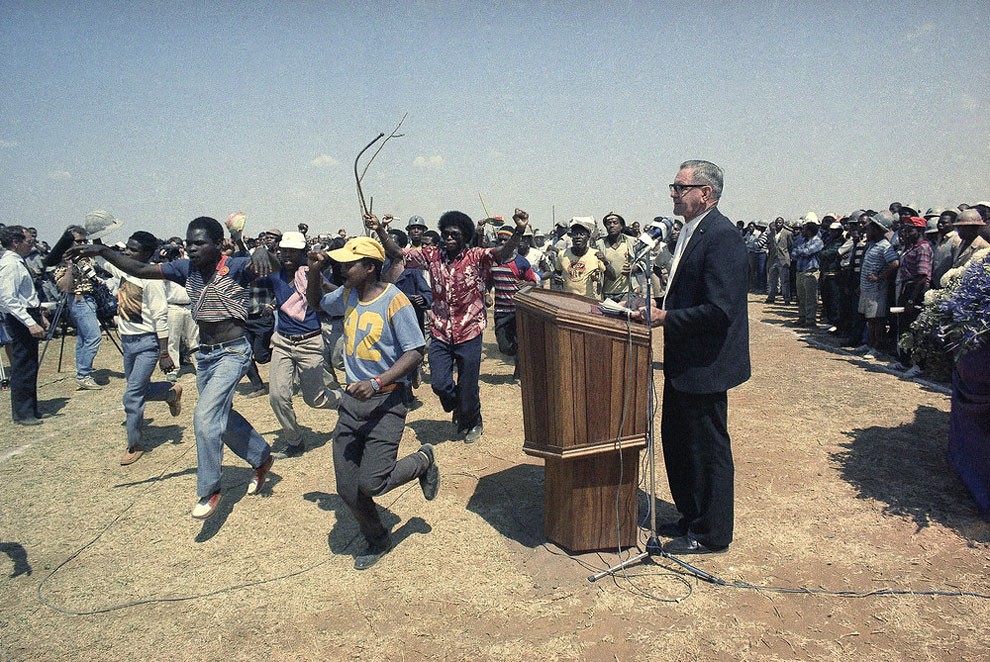 Hundreds of angry black miners, waving sticks and iron pipes, disrupt a multi-racial memorial service in Evander, South Africa, September 23 1986, at the gold mine shaft where 177 miners died in a fire. (Photo by AP Photo) 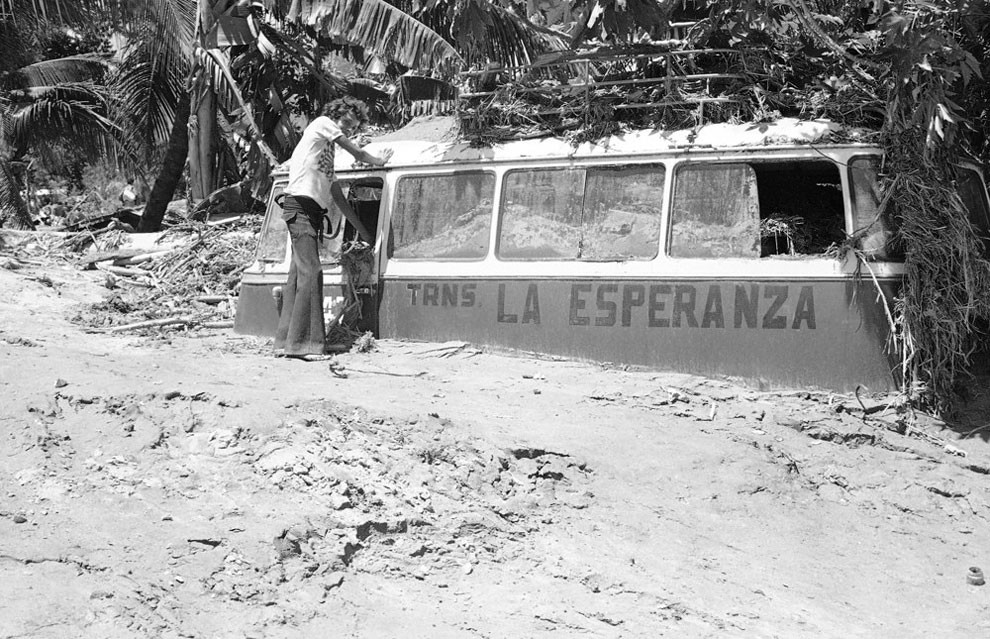 An unidentified man tries to clean mud from inside and around a minibus that was half buried when floodwaters from Hurricane Fifi inundated the northwest Honduras town of Choloma, Honduras, September 23, 1974, where almost 3,000 persons are known to have been killed. The words in Spanish on the side of the bus mean Hope Transportation. (Photo by AP Photo) 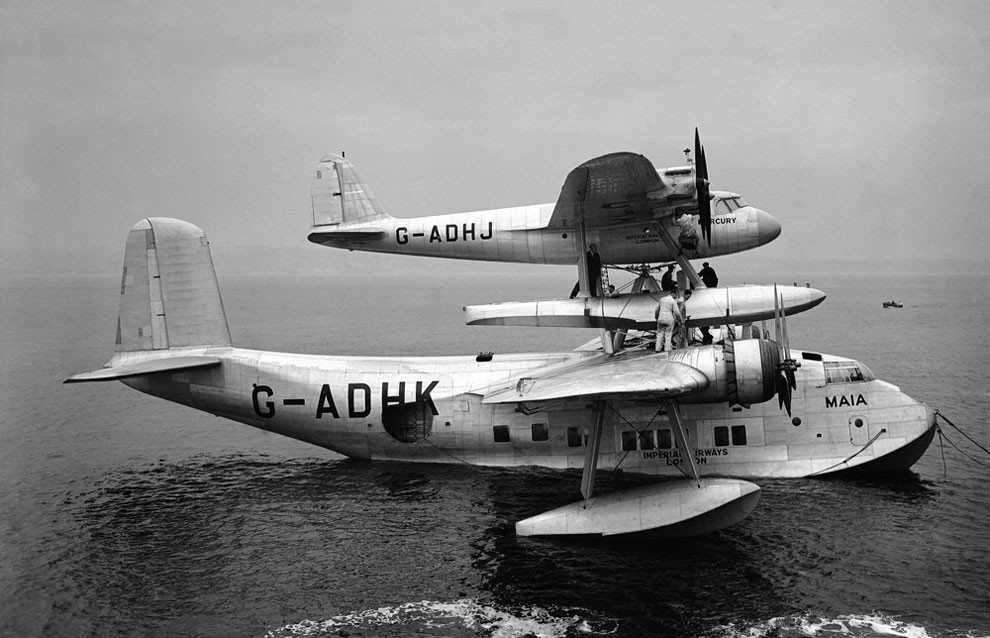 Mercury and Maia, fuelled and overhauled, are waiting in the Tay at Dundee, for favorable weather to start the flight to the Cape, a distance of 6370 miles. The composite machine moored in the Tay River, at Dundee, on September 23, 1938. (Photo by AP Photo) 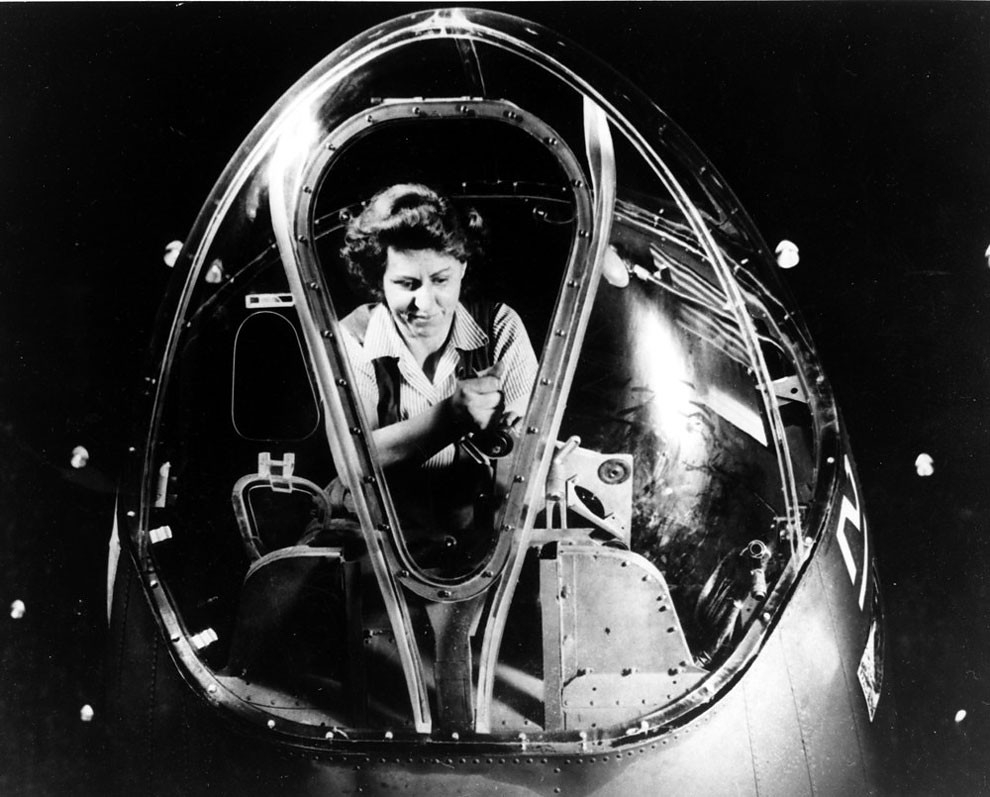 A female technician fits the bombsight mount of a B-17F heavy bomber nearing completion in Long Beach, Calif. on September 23, 1943, during World War II. The mount will carry the world’s deadliest bombsight. Better known as the “Flying Fortress”, the B-17F is a later model of the B-17. (Photo by AP Photo) 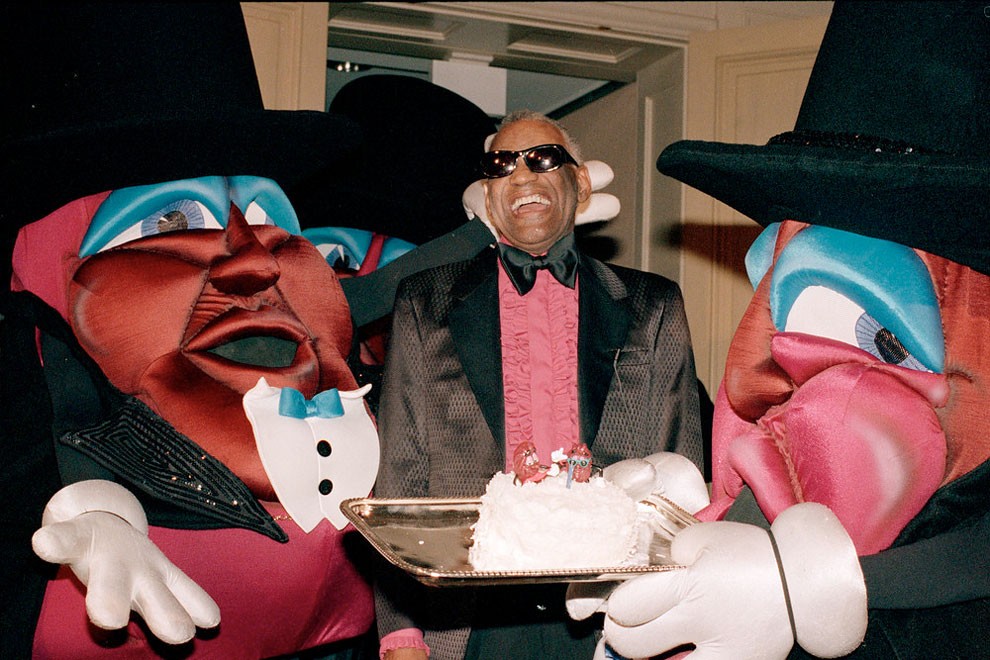 With the help of the life-size dancing raisins, entertainer Ray Charles laughs when presented a cake to celebrate his 58th birthday Friday, September 24, 1988 at the Beverly Hills Hotel. (Photo by Reed Saxon/AP Photo) 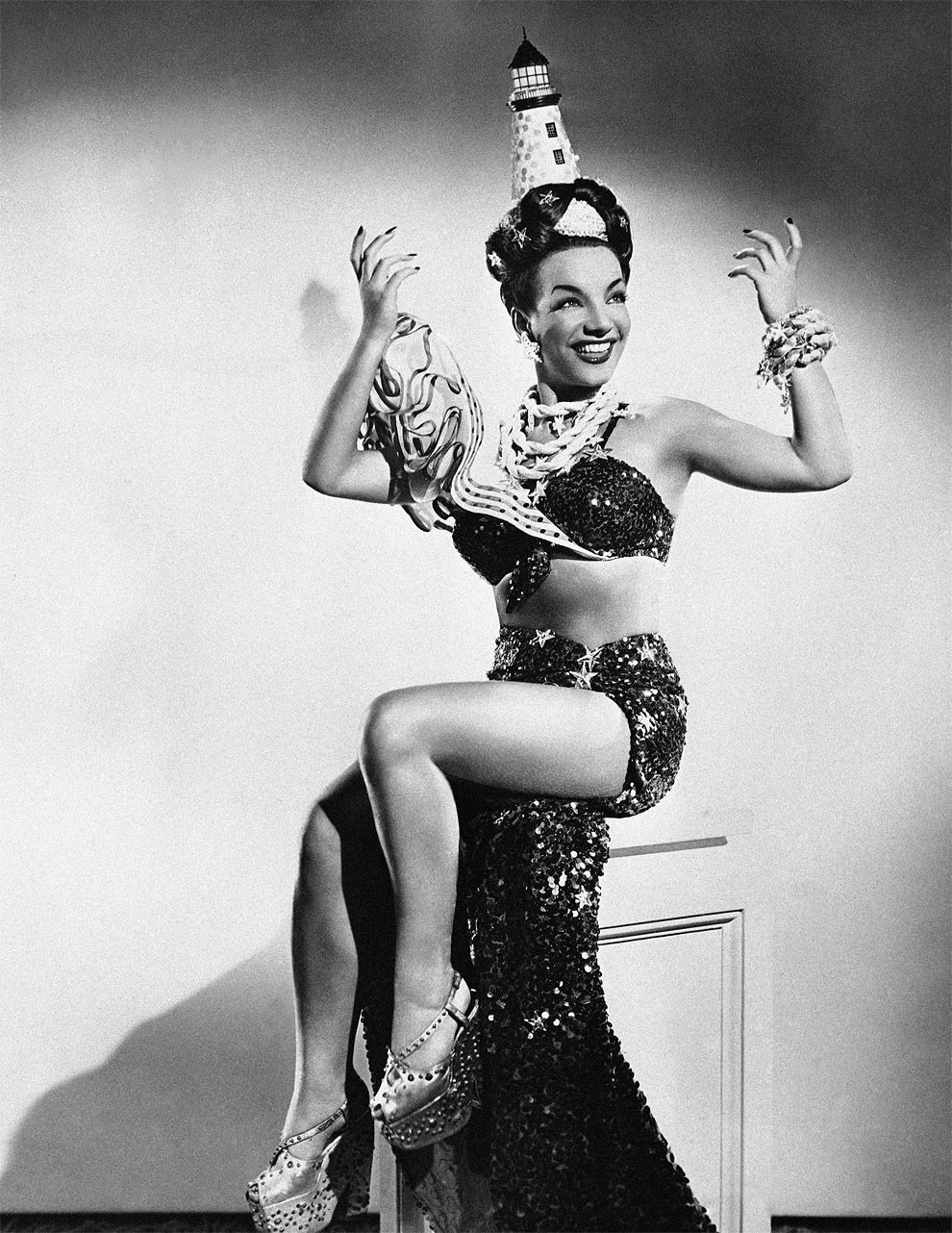 Carmen Miranda tries new high hats thought up designers, such as this miniature lighthouse which she wears in the film “Doll Face”, on September 24, 1945. She does not appear to mind the weight of it either for it lights up from its own batteries. To increase her stature, Miranda wear jewel-studded thick sold platform shoes. (Photo by AP Photo) 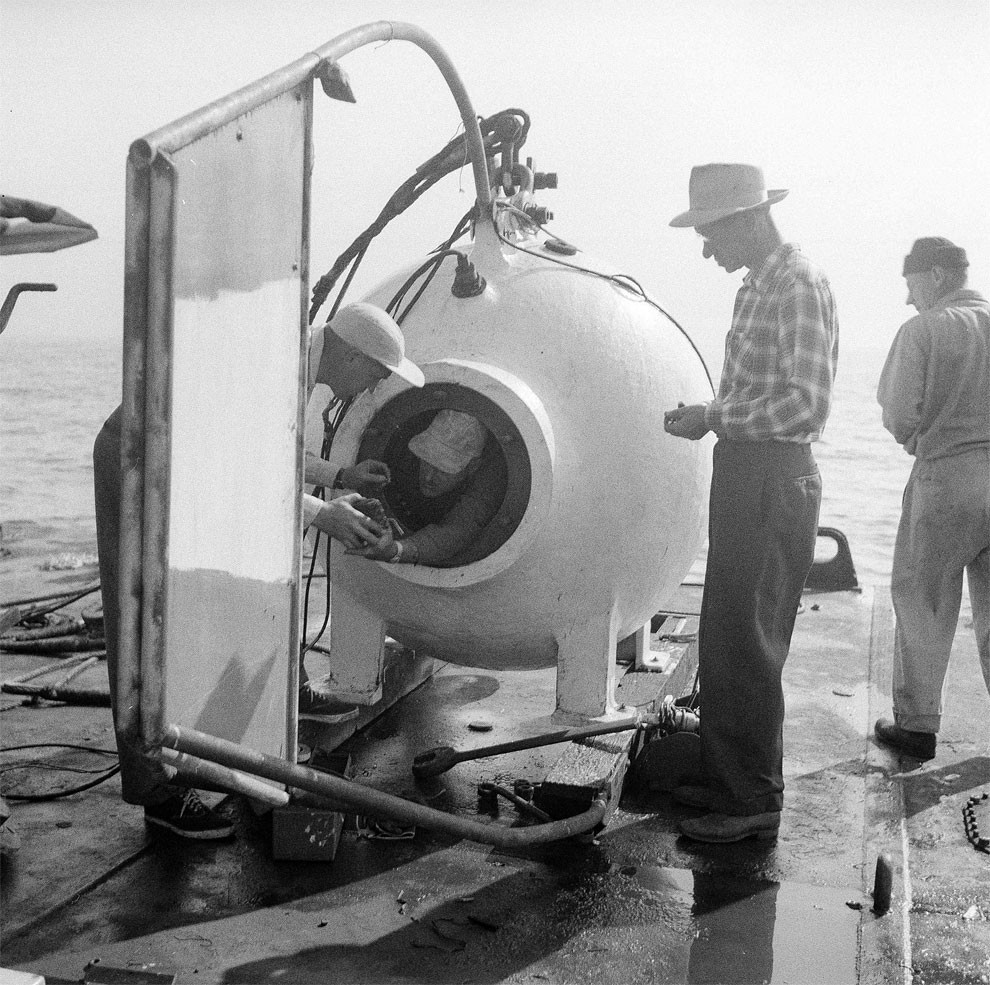 Diver Otis Barton, who hopes to break his own record for descents into the sea, leans from the steel diving bell as he prepared for a practice dive, September 24, 1952, on Catalina Island, Calif. Talking to Barton at left is Dr. Maurice Nelles, his technical advisory. At right is Perry Stille, electronic communications expert. The descents are made from a barge off the island. (Photo by AP Photo) 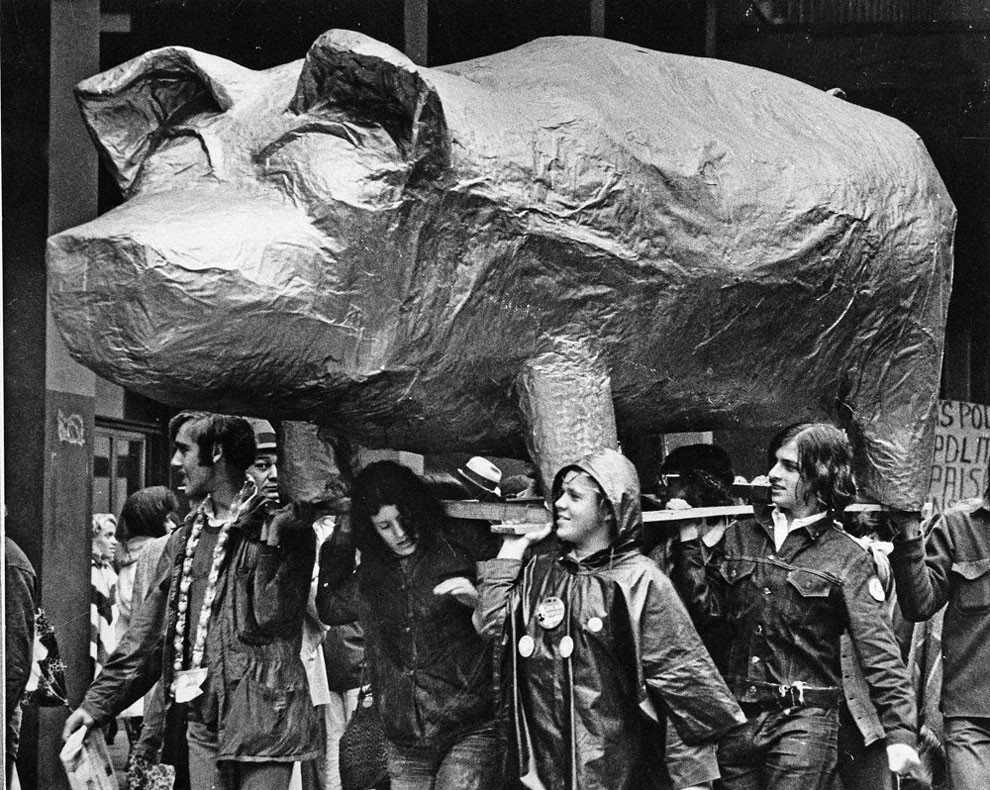 Demonstrators carry a large papier mache pig past the federal courthouse as the trial got underway for eight people accused of conspiring to riot during the 1968 Democratic National Convention in Chicago, September 24, 1969. (Photo by AP Photo) 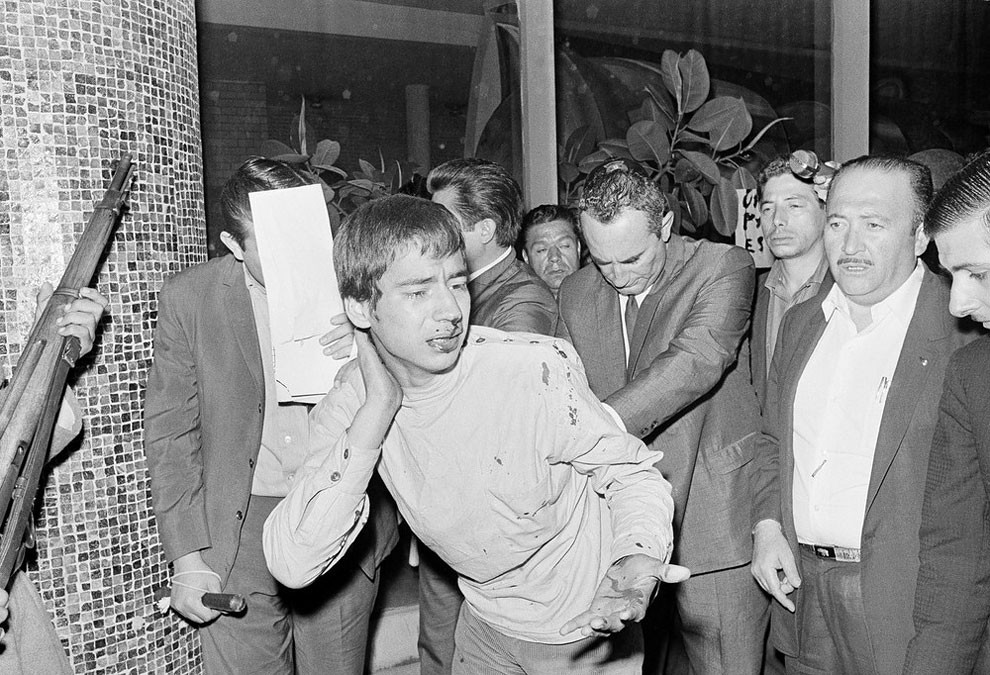 A bleeding youngster weeps as he is arrested by police agents at the Santo Tomas Polytechnic Institute in Mexico City, September 24, 1968, where students and police had a five-hour battle. (Photo by Jesus Diaz/AP Photo) 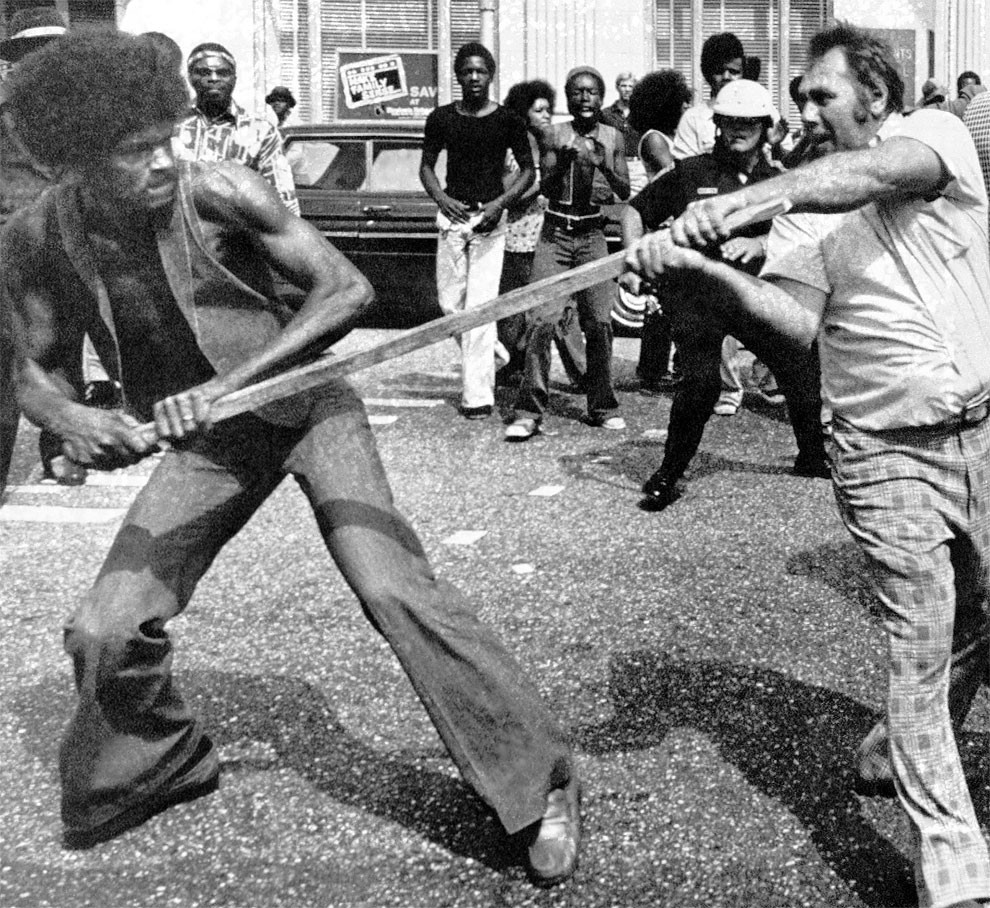 A member of the Ku Klux Klan and black man struggle over possession of a stick during an encounter in downtown Mobile, Alabama, Saturday, September 24, 1977. A large group of blacks disrupted the Klan’s march, resulting in at least two encounters between the two groups. (Photo by AP Photo) 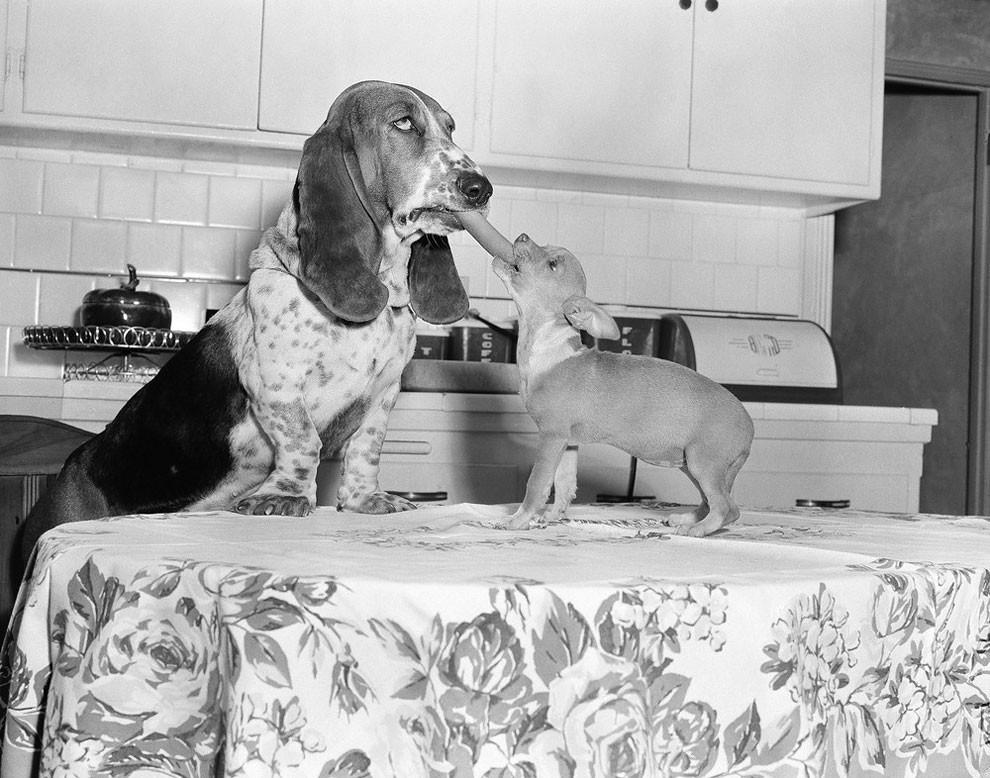 Cleo, the famed movie and TV basset hound and his small chihuahua friend, вЂњCandyвЂќ, pose for a picture illustrating National Dog Week in Los Angeles, Calif., September 24, 1956. Cleo held the wiener just as his trainer told him, but the first four times he gulped down the tidbit just as the Candy began to bite. (Photo by Don Brinn/AP Photo) 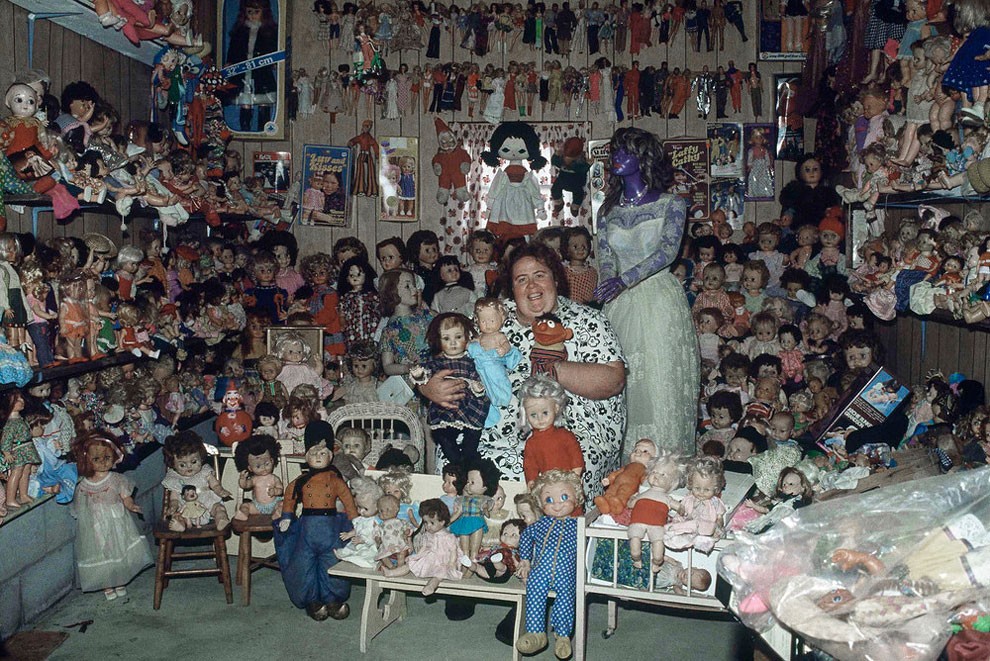 Carol Rosenblata of Odessa, Ont., near Kingston, is surrounded by some of her 3,000 dolls on September 24, 1980, which she has collected over the years. Her dolls come in a rainbow of colors, a world of nationalities. (Photo by AP Photo/The Canadian Press)