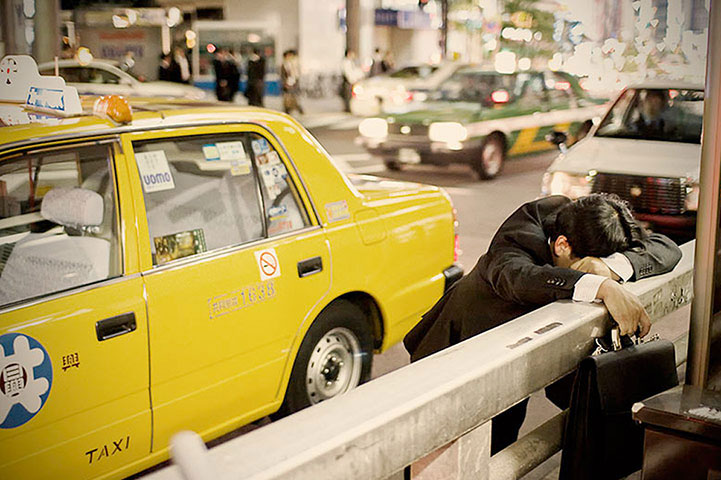 Adrian Storey/Uchujin: “The city that invented the term ‘karoshi’ (death from over work) and a culture of alcohol abuse takes it’s toll on another salaryman” 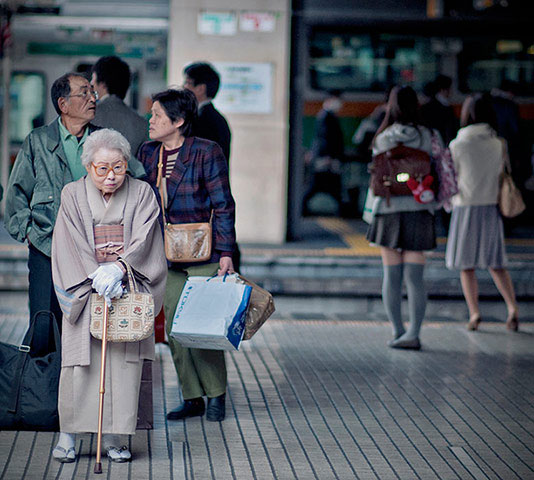 From Lee Chapman of the Tokyo Times blog: “Despite Tokyo’s much-touted modernity, it’s often a very thin veneer that masks a surprisingly traditional city, and this lovely old lady in some ways embodies that, as well as highlighting the ageing of Japanese society as a whole.” 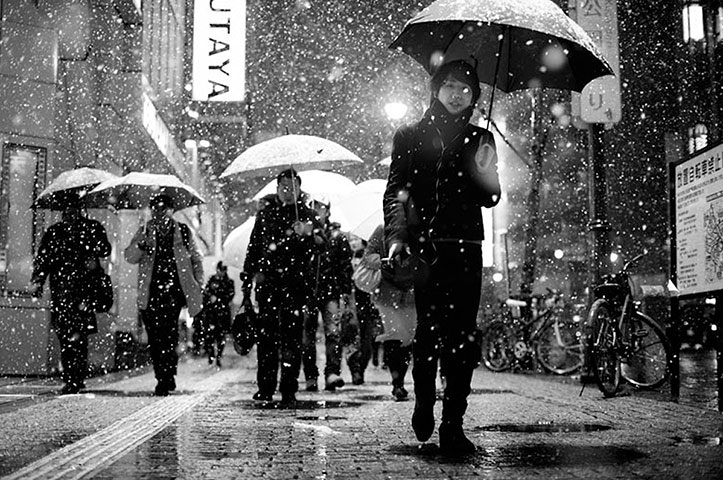 Alfie Goodrich, Tokyo-based photographer: “Snow rarely lands in Tokyo but when it does [as it did for just one night in February 2010] I have to get out in it as the city turns magical, so this shot for me is one which underwrites that, as a photographer, you gotta sieze every opportunity to get out and shoot.” 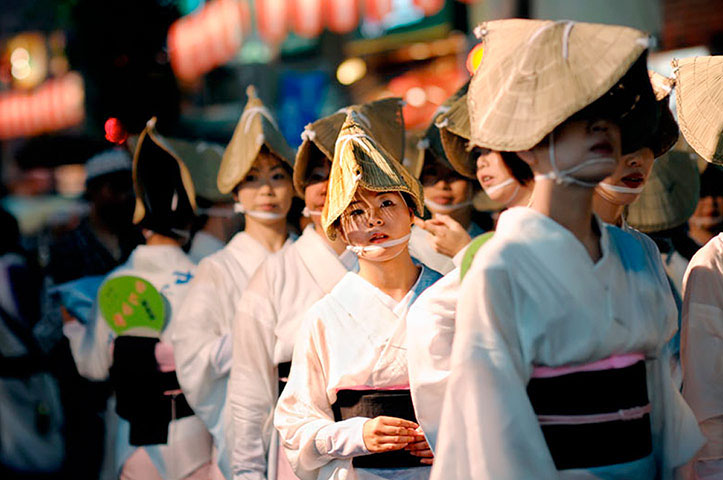 Alfie Goodrich, Tokyo-based photographer: “Kagurazaka is a neighbourhood of Tokyo that still has some old-world charm, cobbled streets, and one of the biggest dance festivals in the country in August – The Awa-odori.” 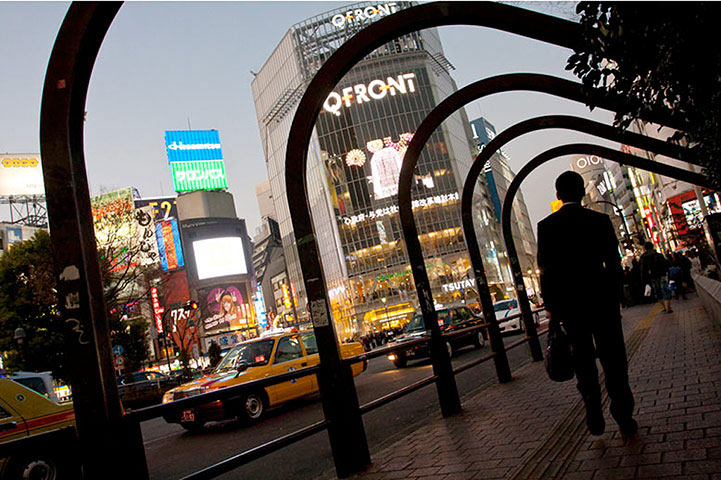 Damon Coulter, Tokyo-based photographer: “Hachiko Square in Shibuya is the de facto centre of Tokyo, and continues to be the capital’s number one meeting-place. ‘Meet you at the dog on Friday night’ is the oft heard start to a weekend of fun – referring to a statue of a famously loyal dog called Hachiko who waited at the entrance to the train station here for the return of her master from work, even several years after he had died.” 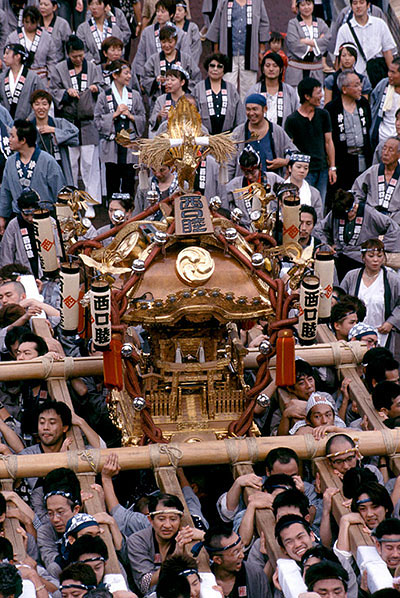 Damon Coulter, Tokyo-based photographer: “Matsuri (festivals) happen all over the city throughout the year – many festivals feature a mikoshi as pictured, which is a portable shrine carried around on the shoulders of local people. Inside, apparently, the local god is being given a noisy tour of the neighbourhood to keep him happy and ensure his continued protection. ” 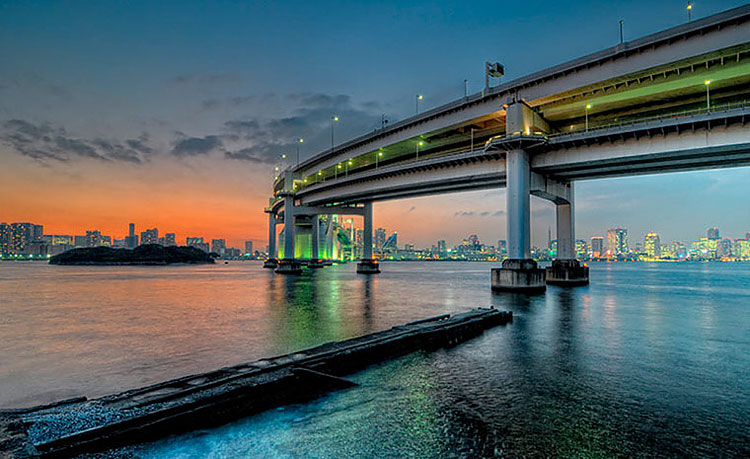 Alfie Goodrich, Tokyo-based photographer: “The Rainbow Bridge is an iconic symbol of Tokyo’s bayside and I was particularly pleased with finding a unique spot to shoot it from: the old supply pier from when this part of Odaiba was a fort built to repel the American invaders in the 1800s” 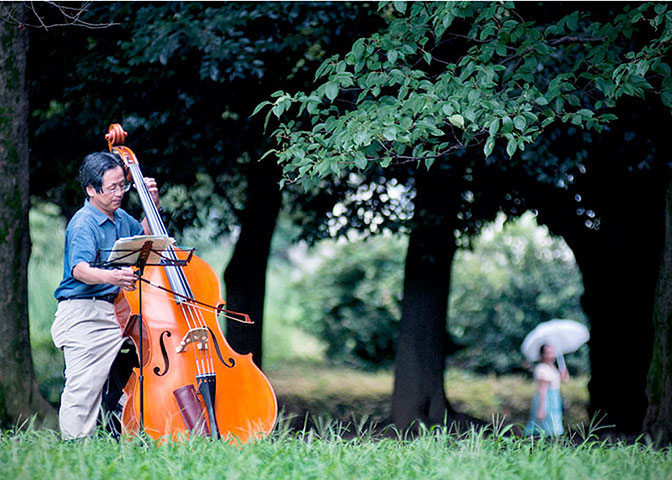 From Lee Chapman of the Tokyo Times blog: “It’s true that Tokyoites work hard, but in a country of hobbyists, they are often equally committed to the more pleasurable things in life too, and of all the amateur painters, musicians and sports lovers I’ve seen, the dedication of this particular man was a genuine joy to see.” 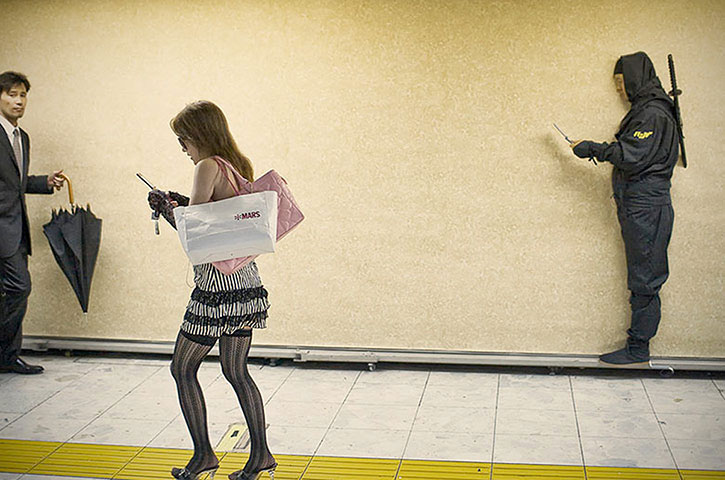 Adrian Storey/Uchujin: “Passing through some of the busiest stations in the world everyday strange sights become normal, but every now and then something stops me in my tracks”

A Photographer Is Using A Unique Method To Show The Shift From Day To Night Across Famous Cities In Spectacular Images
Beautiful Ethiopian Headwear Made From Your Trash
On Set with David Bowie and Tilda Swinton
"Ink Stories": Intoxicating Photos of Remarkable Women and Their Tattoos by Reka Nyari
Julianne Moore As Famous Works Of Art
Paolo Pettigiani Sees New York City's Central Park In Pink And Blue
Winners Of The National Geographic's Kids Photography Competition 2015
You Can Sleep Behind A Wall Of Books In This Hostel In Tokyo
Gorgeous Female Portrait Photography By The Russian Photographer Alena Andrushenko
Fascinating Photos Of Neil, The Pet Lion Of Tippi Hedren And Melanie Griffith
This Bride Took Her Own Wedding Photos, and Then They Went Viral
Between Clouds And Mists: Beautiful Rural Poland In Dreamy Photographs By Marcin Sobas
Beautiful Intimate Portrait Photos Of Young People Of San Diego In The Early 1970s
Oddly Satisfying Photos Of Food Color Coordinated With Clothing
Drugs shipping. Don't do this!
Photographer Puts Everyday “Selfies” to Shame
Guy Walks His Pet Tortoise Around The Streets Of Tokyo
Artist Creates Surreal Images That Balance Between Reality And Imagination
"Backstage Disillusion": The Incredible In-Game Photo Artworks By Petri Levälahti
Beautiful Early Entries Of The 2019 Sony World Photography Awards
Breathtaking Portraits Reveal The Haunting Beauty Of Russian Ballet Dancers By Irina Yakovleva
Beautiful Life Of Amsterdam In The 1950s Taken By Kees Scherer
The Beautiful Pictures of Waves
"Lost In Time": Photographer Goes In Search Of Russia’s Least Known Museums
bloggers, gallery, tokyo