Beautiful Ethiopian Headwear Made From Your Trash 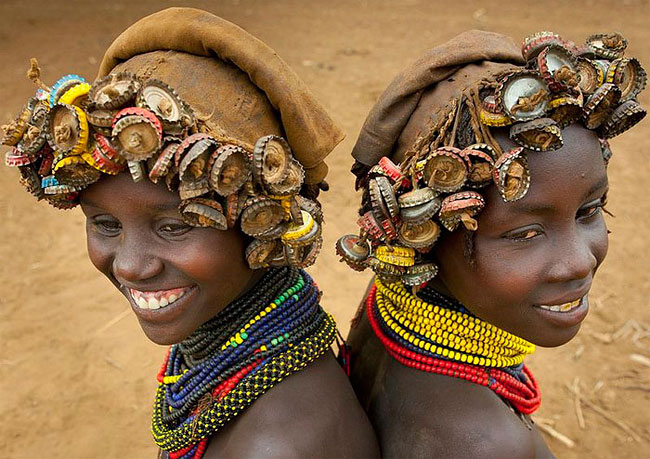 In southern Ethiopia, deep within the Omo Valley you’ll find the semi-nomadic tribe known as ‘The Daasanach’, a group made up of some 50,000 individuals. 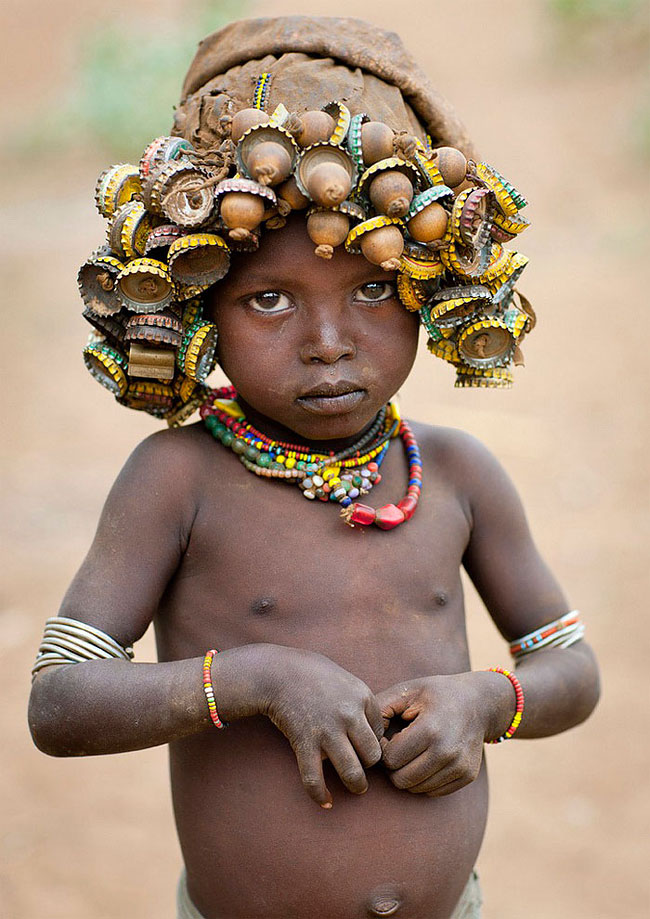 Over the past 50 years they have become increasing dependent on agriculture to help sustain a living, a side effect of their original land being taken and sold from underneath them. 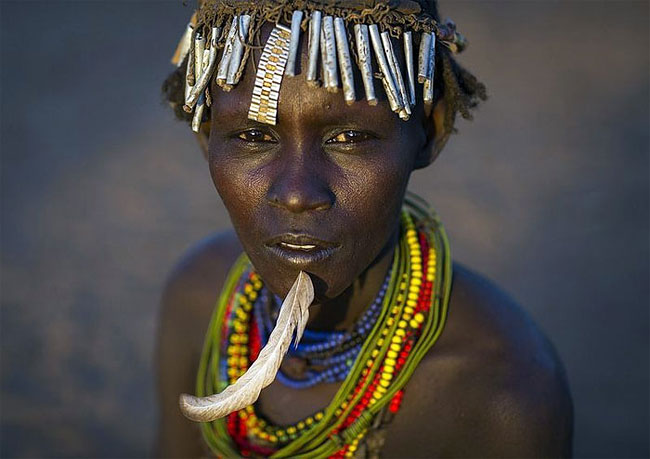 Today different members of the tribe can be found in pockets near and around the Omo River, the ideal place to grow crops and help support their family. 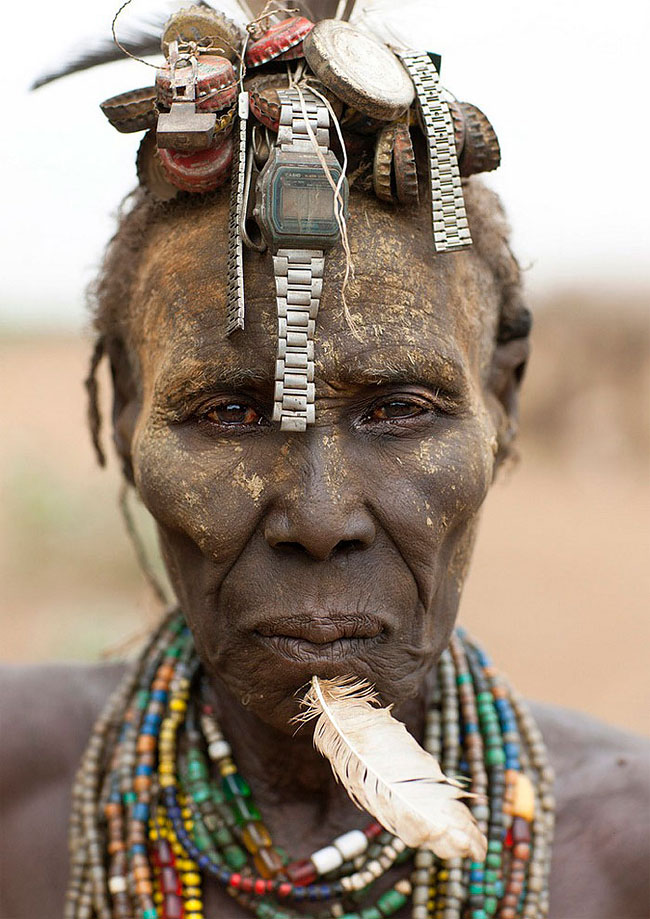 Eric Lafforgue (previously) is a French travel photographer who has spent several years documenting and photographing The Daasanach. 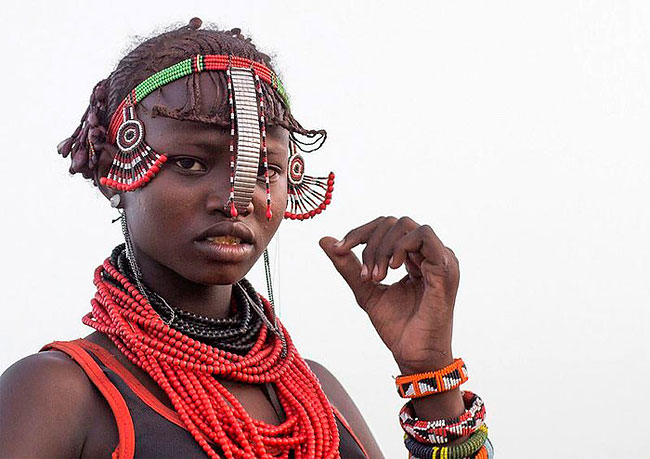 During his experiences, he’s seen an interesting trend develop amongst the community itself, their fascinating and reappropriation of discard modern manufactured goods. 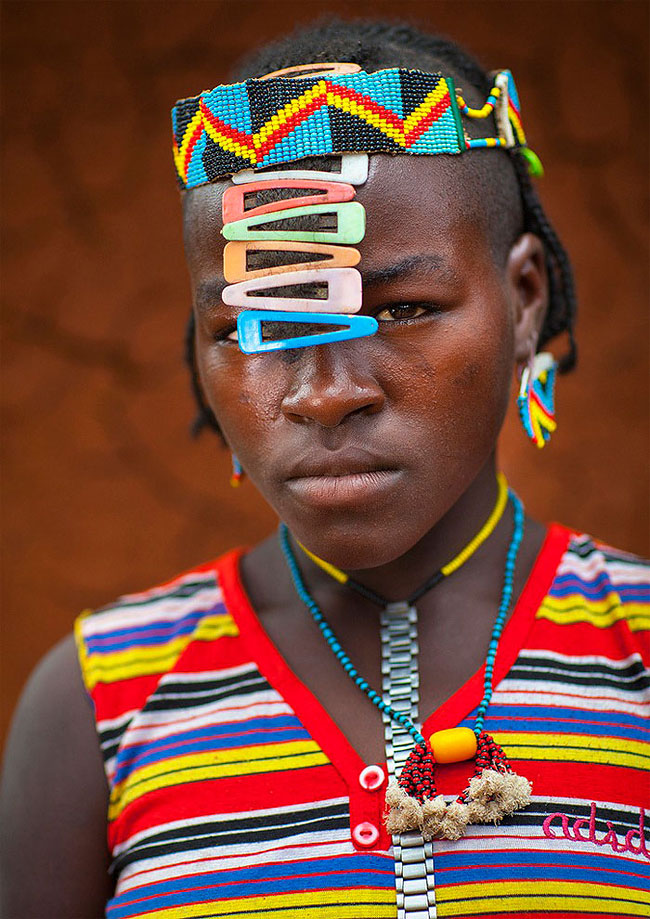 Using bottle caps, hair clips and even old wristwatches they women turn these items into fashionable head wear and jewelry, designed to be worn by young and old. 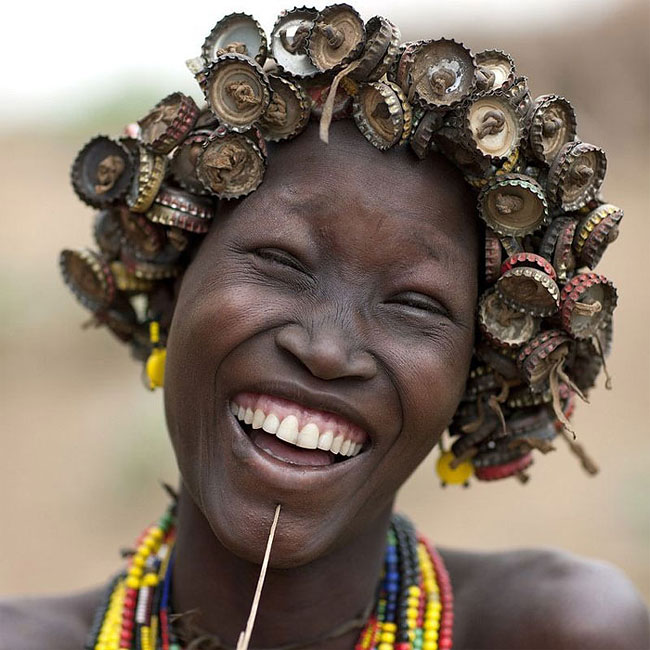 “Younger girls and children get the most basic version of the wig, while the oldest women are treated to the heaviest numbers with the most embellishment.”, he explains. 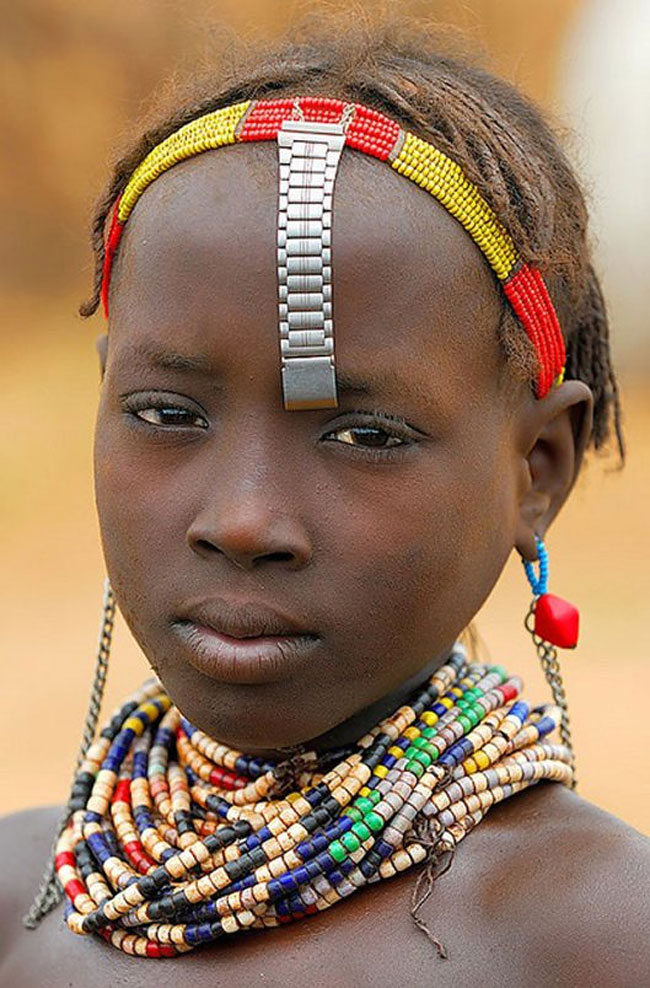 “Men are only allowed to wear the bottle top wigs until they marry – after that, they create small clay headpieces decorated with a colourful harlequin pattern and enlivened with a feather, although the latter is only allowed after a hunt or a successful clash with an enemy.” 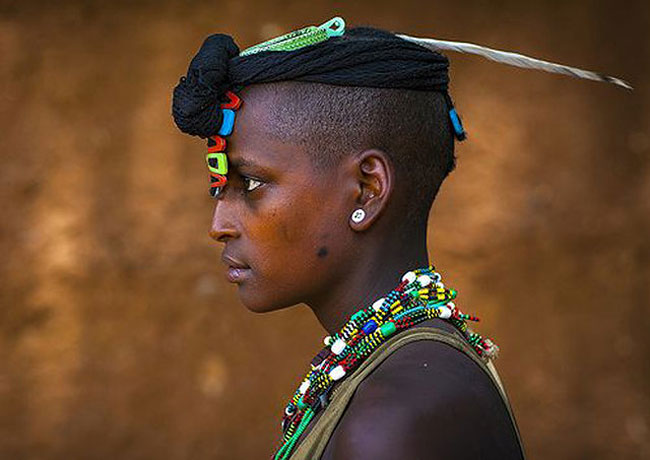 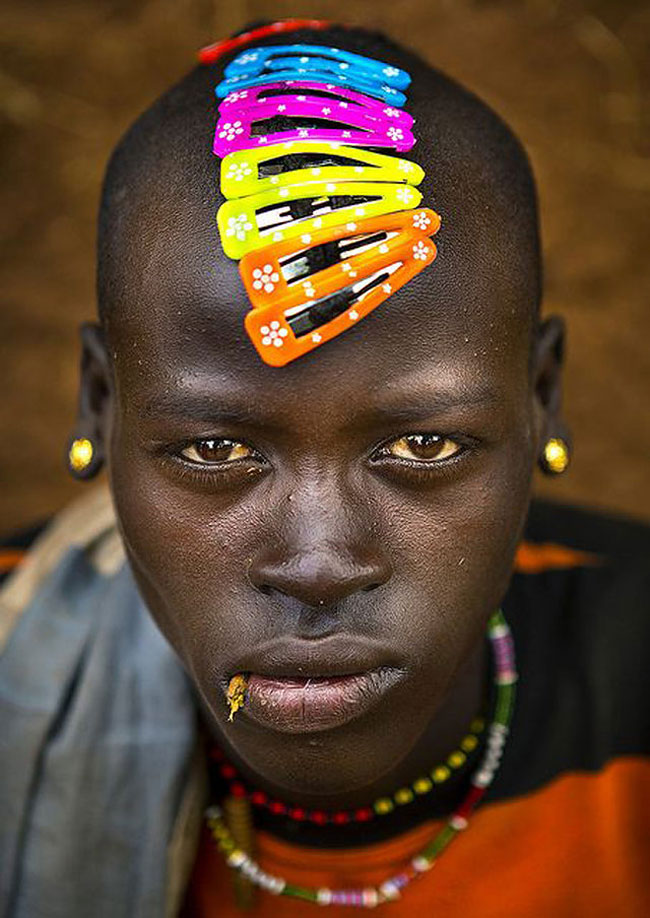 Stuning Photos Of A Children's Military Boarding School In The Ukraine
Magical Urban And Natural Landscapes In Japan By Hiroki Furukawa
Treasure-Laden Viking Cemetery Discovered in Poland
Amazing Vintage Photos Of Badass Women Riding Their Choppers
Our Small World Through The Lens Of Russian Photographer Sergey Maximishin
Zoe Saldana for Malibu Magazine
Lauren Auerbach for Quality Magazine
Our World Is Beautiful: Amazing Winning Photos Of CEWE Photo Award 2021
Never Before Seen Photos of Bruce Lee From The Family Archive
Ryota Kajit Captures Amazing Photos Of Natural Ice Formations In The Waters Of Alaska
Photo Masterpieces Of The Red Bull Illume Photo Awards 2016
Dad And Daughter Recreates Iconic Scenes From 73 Famous Movies And TV Series
Taylor Wessing Portrait Prize 2015
Stunning Vintage Pictures Of The London Underground Through The Times
Animal Orchestra
This Artist Blends Human Bodies And Animal Faces Together
Photographer Uses Creative Tricks To Take Amazing Pictures
19-Year-Old Student Hides Spy Camera In His Clothing To Take Secret Street Photos In The 1890s
Rosie Hardy Escapes Into Fantasy Worlds Through Her Self Portraits
No, This Is Not Skyrim, This Is Czech Prachov Rocks In Bohemian Paradise
This Woman Had A Humorous 'Sexy' Boudoir Photo Shoot In A T-Rex Costume
Photographer Mom Takes Magical Autumn Portraits Of Her Kids
This Elderly German Couple Steals The Show Every Time They Go Out
10 Photos Of Carrie Fisher Promoting "Return Of The Jedi" At A Rolling Stone Magazine Beach Shoot, 1983
beautiful, ethiopian, headwear, trash

Surreal Stretched-Out And Rearranged Portraits By Sakir Yildirim
"Float Around": Photos From Nirvana’s Underwater "Nevermind" Shoot
A Photographer Has Captured Hundreds Of Leaves To Show The Beauty Of Diversity And Imperfection
2014 Olympic Host City Sochi is a Strange Place
Vintage Photographs of Christine Keeler Posing in a Swimsuit on a Beach in Spain and France, 1963
A Photographer's Aerial Photos Of Parked Planes Show Just How Far The Airline Industry Has Fallen During The Lockdown
An Artist Creates Stunning Portraits By Combining Photos Of Celebrities
Dad And Daughter Recreates Iconic Scenes From 73 Famous Movies And TV Series
17 Seriously Intriguing Photographs That Will Trick Your Eyes
Reflected Images Of Tree Bark Reveal The Faces Hiding In The Forest
Source of inspiration since 2007. Proudly hosted by WebHostingBuzz.
Privacy Policy · Terms of Service · Content Removal Policy 🇺🇦 ❤️