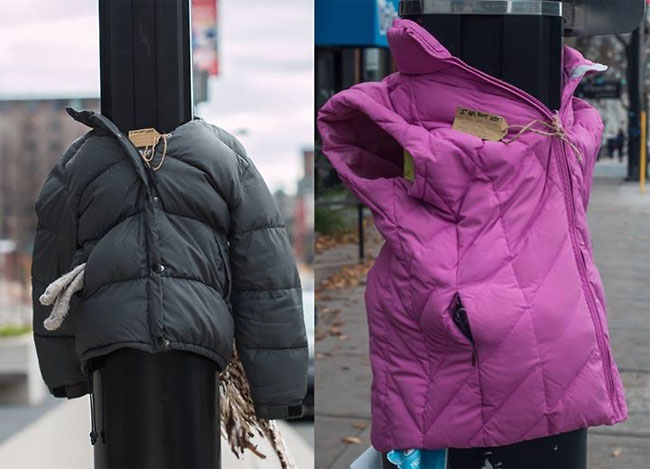 Residents in Nova Scotia, Canada, have recently been confronted with a strange sight: coats tied to lamp poles. But these jackets haven’t been lost — they’ve been put there for homeless people forced to brave the freezing cold.

Attached to the coats are labels reading, “We’re not lost! If you are stuck out in the cold, please take me to keep warm!”

Every year, Tara Smith-Atkins asks the local community to donate old coats. Then, with her 8-year-old daughter and seven of her friends, they tie the coats, as well as scarves and mittens, to street poles around town. 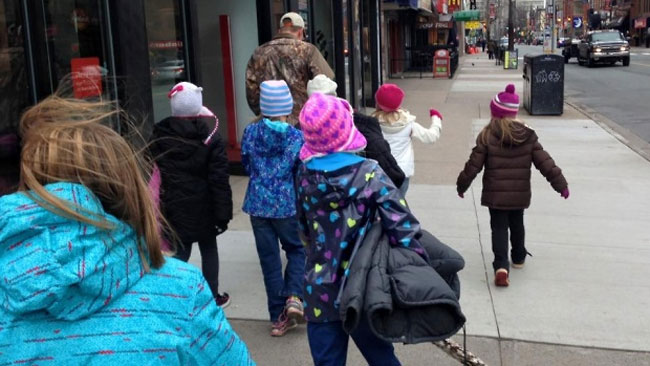 Tara told CBC she wanted to show the kids how awful being homeless in winter would be. “They definitely learned the importance of it. When we got back after an hour they were freezing.”

The project started in Toronto last year, after Tara was shocked by the number of homeless people living on the streets during the coldest months of the year. 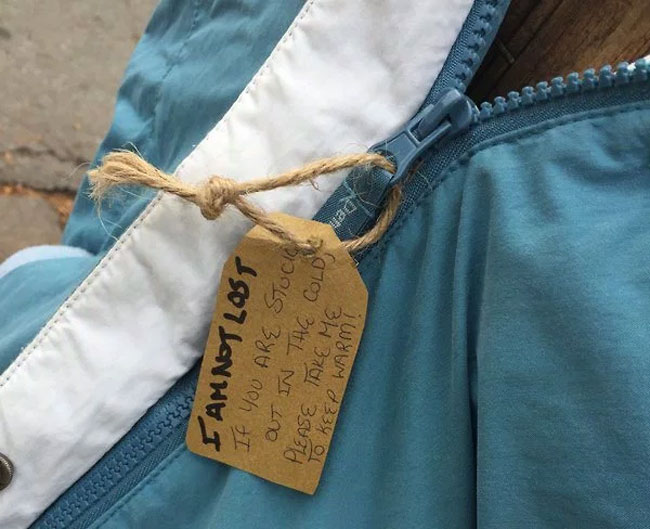 Next year, Tara hopes to put out more coats than ever and even include a $5 voucher in coat pockets, so the wearer can enjoy a paid-for hot meal. For more information, visit the Halifolks Facebook page.

"Arbor Vitae": The Superb Minimalist and Architectural Forms by Bezmiar
When Your Daughter Has To Wear An Eye Patch Every Day, You Make The Most Of It
'The Collectivity Project' by Olafur Eliasson
Cartoon Characters As The Main Subject In Classic Masterpiece Paintings
DeLorean Motor Company
"All is Inside": The Superb Surreal Portraits by Shahab Shahmohamadi
The Superb Gundam, Cyberpunk and Science Fiction Artworks of Ken Hensly
"Echoes From Other Worlds": Spectacular Digital Paintings By Bayard Wu
Artist Uses Her Hands As A Canvas To Show Her Hidden Worlds
Realistic Classic Car Drawings By Alessandro Paglia
This Instagram Account Is Dedicated To Showing The Most Bizarre Thrift Store Finds
The Funniest Protest Signs From Trump’s Visit To The UK
"Make the World Go Away": The Surreal and Inspirational Artworks of Ioana Harasim
Guy Leaves Hilarious “Shopping Tips” In Grocery Store
"Happy Easter"
Towering New Pigeon Murals by ‘Super A’
Hyper-Realistic Liquid Oil Paintings By Sarah Harvey
Artist Imagines How Pop Culture Characters Would Look If They Were Saints
The 'We're All Eating This Together' Campaign
Can You Recognize These Logo Brands? Artist Pedro Almeida Has Got A Challenge For You
The Incredible Art Of Maciej Kuciara, Who's Worked On The Last Of Us, Ghost In The Shell & Crysis
Photographer Creates Imaginative Images Of Her Daughter And Her Shadow
Detailed 3D Illustrations Of Anatomically Correct Cartoon Character Skulls Labeled As Scientific Specimens
Teenage Mutant Ninja Turtles Painted As The Renaissance Painters They Were Named After
canadian, coats, homeless, poles, street, tying

Splashes of Colors on Streets of Madrid
New Reflected Landscapes and Photo Manipulations by Victoria Siemer
Inspiring Beautiful Illustrated Portraits By Janice Sung
This Pin-up Calendar Is Not What You Expect
Someone Spotted That David Bowie Often Looked Like A Sea Slug, Created An Entire Blog To Prove It
Cute and Warm Sketches of Japanese Life by Naoyuki Hayashi
Sick Of Seeing All-Pink Girls’ Clothes, This Dad Let His 3-Year-Old Daughter Dress Herself
Artist Esoj Luna Illustrated Iconic Brands As If They Were Humans
Philippe Echaroux Created The World’s First Street Art In The Amazonian Rainforest
This Japanese Artist Imagined What Cats Would Look Like As Anime Girls
2007 ‒ 2022 by Design You Trust. Proudly hosted by WebHostingBuzz.
Privacy Policy · Terms of Service · Content Removal Policy ❤️ 🇺🇦