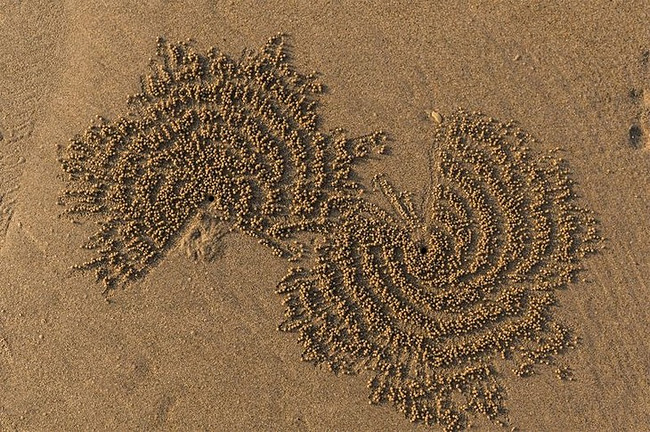 In sandy beaches of certain tropical regions in the Indo-Pacific live a tiny crab, about a centimeter across, called the “sand bubbler crab” of the genera Scopimera and Dotilla in the family Dotillidae. 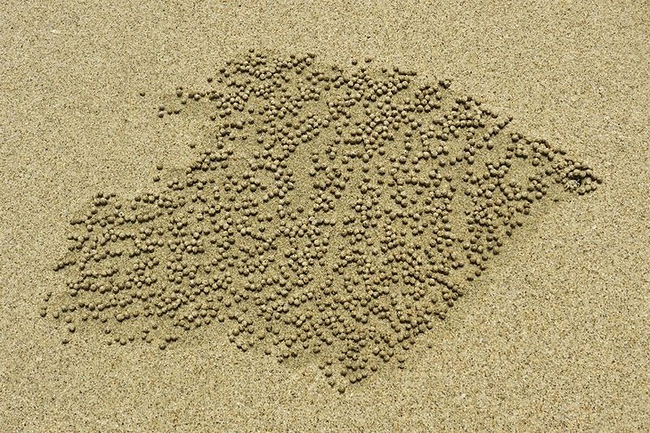 These tiny crustaceans have spherical bodies with long and flat pinchers, hairy legs, and eyes on short stalks which can fold away into grooves when the crabs scurries into its burrow. 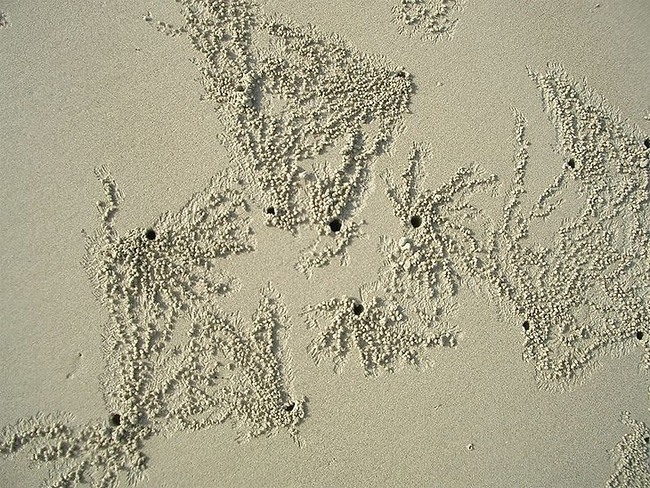 With a body color same as sand, the crabs are easy to miss. What’s unmissable however are the intricate patterns they make on the beach when they search for food. Like tiny galaxies, these patterns are composed of hundreds of tiny sand balls —sometimes thousands, depending on how many fellows were snacking. 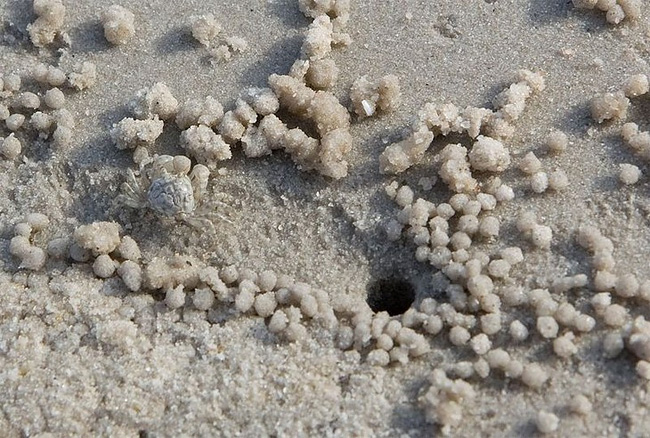 The sand bubbler crab eats the thin coating of edible organic particles on sand grains. When the tide goes out, the crab emerge from their burrows and start sifting through the sand, picking up the sand grains with their downward pointing pincers and bringing it to their mouth to scrap the microscopic food. 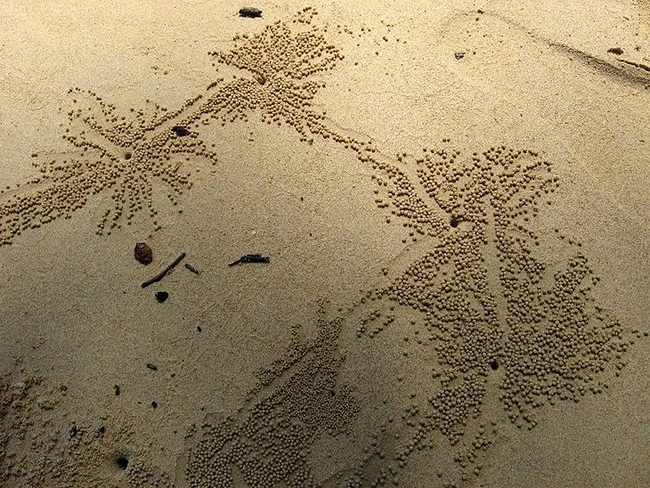 After they have scrapped the sand grains clean, they roll them into little balls and toss them behind. By doing this they avoid sifting the same sand twice. The crabs work radially from the entrance to their burrow, scrapping out a tiny paths with little balls of sifted sand piled up on either side. 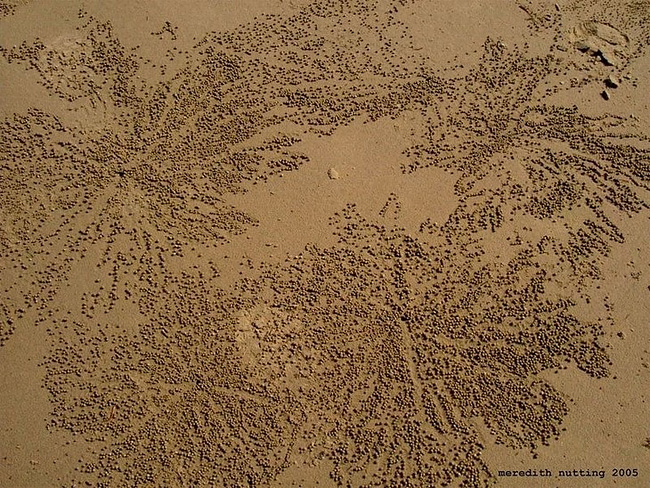 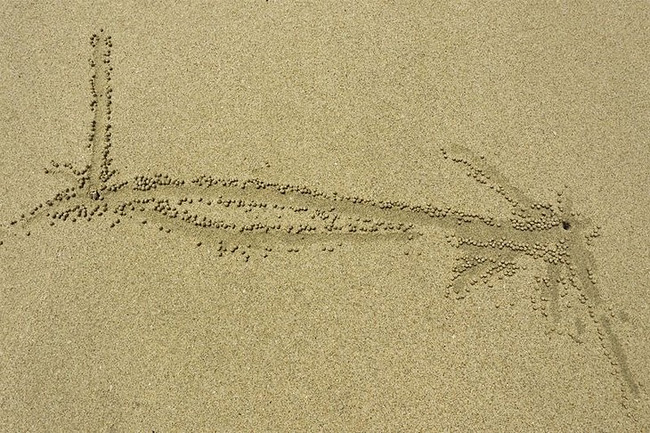 The sand bubbler crab is widespread across the Indo-Pacific region, where they occur abundantly on sandy beaches in the tropics and sub-tropics. 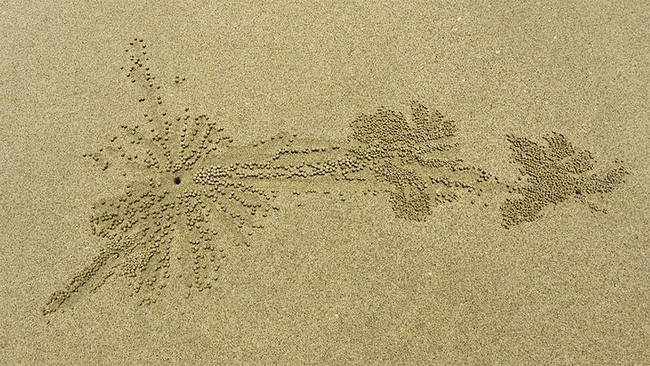 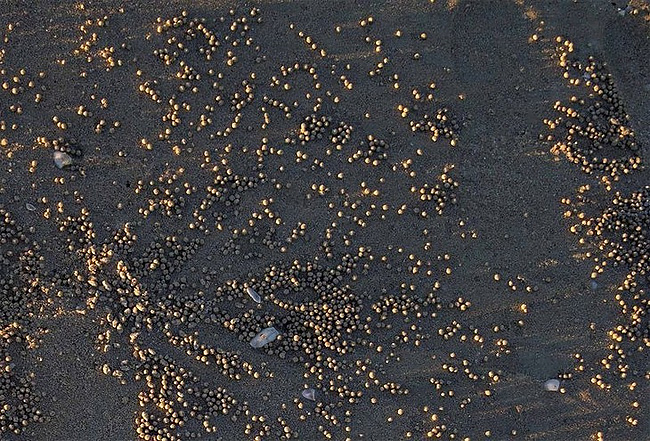 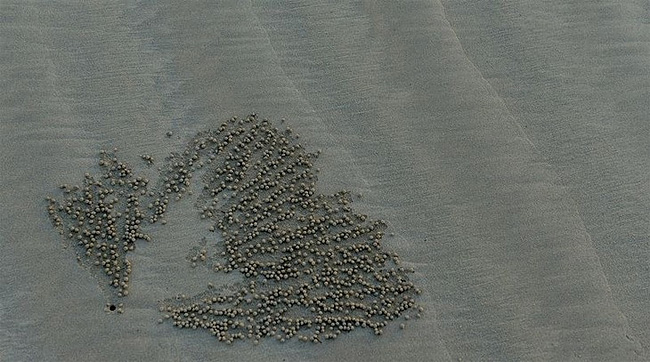 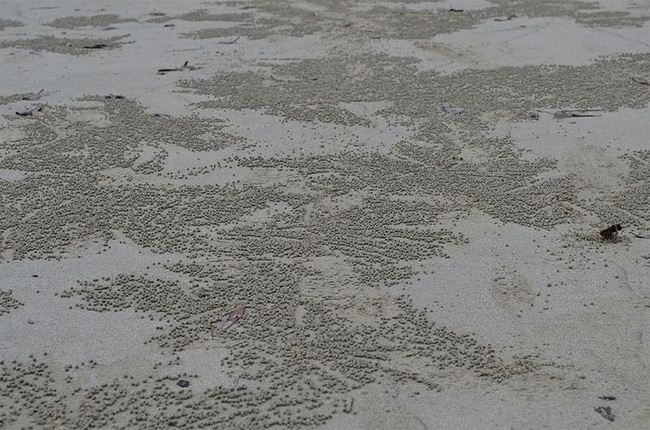 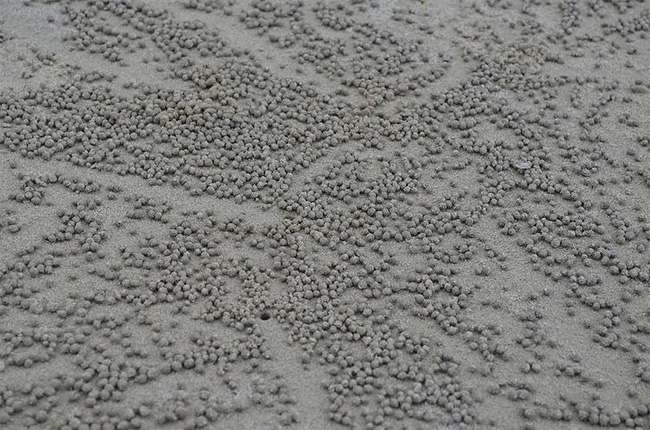 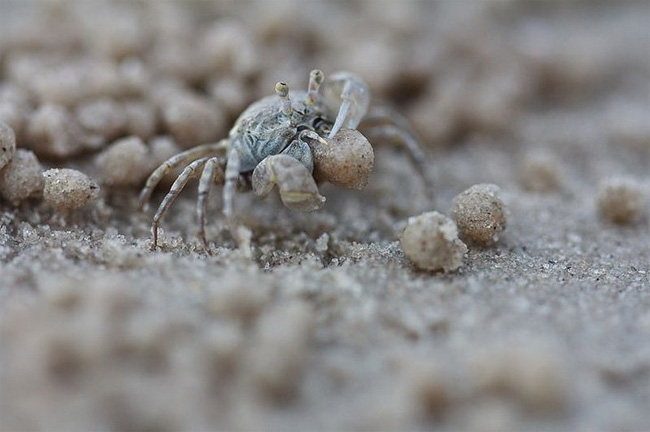 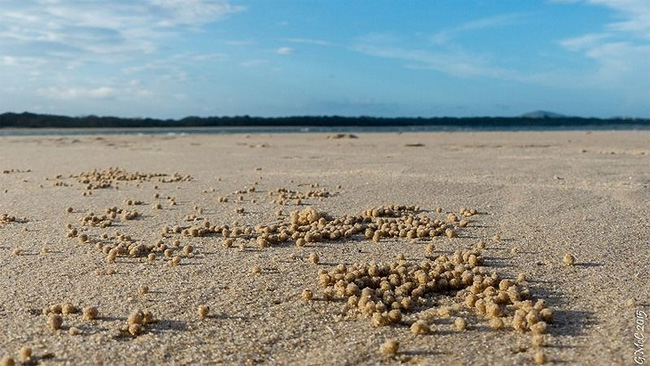 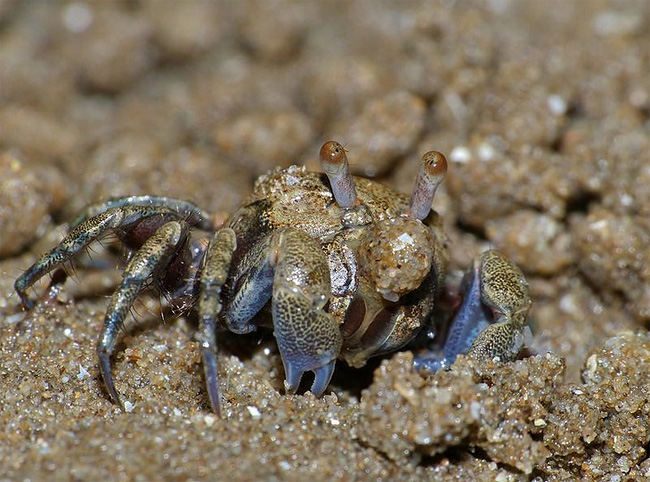 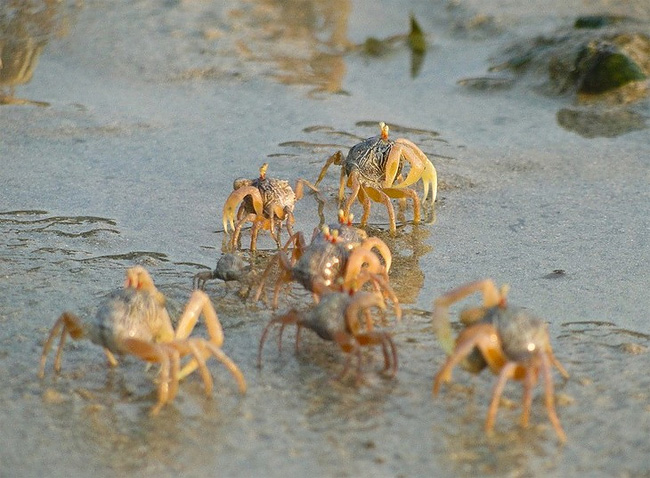 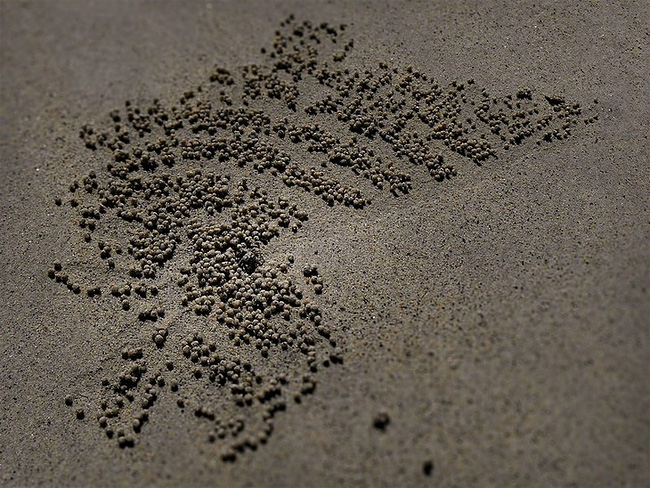 This Couple Invites Brown Bear Along To Their Very Special Ceremony
Artist Creates Beautiful Mashups Between Her Eyes And Animals
This Super Mario Cat Furniture Is Amazing
Dogs At Work
French Artist Eyes Record With Giant Swiss Hillside Portrait
Russian Artist Transforms Old, Shabby Walls Into Mesmerizing Art Objects
Сat and Fox: Unlikely Friendship
This Dog Can Keep Anything On His Head Without Falling
Death of a Giants
No Rat Shall Pass: Cats of the Hermitage Museum
Brutus the Giant Crocodile Attacks Shark in Australia
19-Year-Old Artist Takes Self Portraits To Create These Surreal Compositions
GPS Trackers That Show Cats' Activity During The Night
Pandas Get To Know Their Wild Side
Outlandish Reality: Bizarre Digital Art By The Artist Nikita Veprikov
Cat Fishing: Leopard Gets Covered In Mud Catching Its Fish Supper
Intimate Portraits Reveal Amusing Facial Expressions Of Skeptical Dogs
The Wild Side Series: The World’s National Animals And Their Tracks
Artist Makes a Unique Ceramic Sets with a Love of Nature
This Artist Creates A Warm Clothes For Your Cold Drones
Rest in Peace. 'World's Angriest Cat' Colonel Meow is Dead.
Photographer Turns Her Garden Into a Tiny Cafe; Shoots the Cutest Photos of Animal Visitors
What The Bloody Hell Is A … ?: Brilliant Guide To Animals
This Facebook Group Is Dedicated To Crappy Wildlife Photos That Are So Bad They’re Good
artist, bubbler, frisky, nature

Japanese Artist Turns Awkward Animal Photos Into Beautiful Sculptures
These Stingless Bees Build One Of A Kind Spiraling Hives
"I Vomited": Proud Cats Who Voted In US Election 2020
The Custom Shelving In This Home Keeps The Cat Happy
Artist Rainier Weber Designs Unique Gold-Plated AK47 Chair From Real Rifles
Heartwarming Moment: A Husky was Freed After Falling Through the Ice on Her Morning Walk
"Make Your Pet's Chew Toy Great Again": Trump Dog Chew Toy Is Getting Popular
You Can Live With A Polar Bear Mother And Cub With These Life-Sized Art Masterpieces
Daredevil Photographer Recreates Iconic "Jaws" Movie Poster
Artist Illustrates What Would Happen If Movies And TV Shows Were Made In Real Life
2007 ‒ 2022 by Design You Trust. Proudly hosted by WebHostingBuzz.
Privacy Policy · Terms of Service · Content Removal Policy ❤️ 🇺🇦