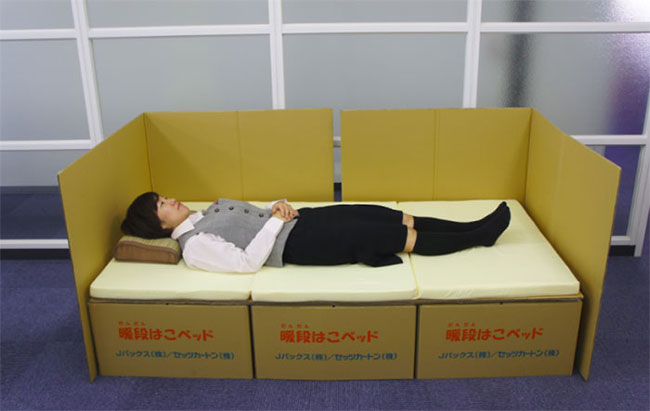 On April 14 2016, Japan’s Kyushu Island in Kumamoto Prefecture was rocked by a magnitude 7 earthquake. The earthquake killed nine people and caused widespread damage to the region. Many people lost everything in the disaster, but thanks to these clever ‘Box Beds’, at least the victims have somewhere comfortable to sleep. 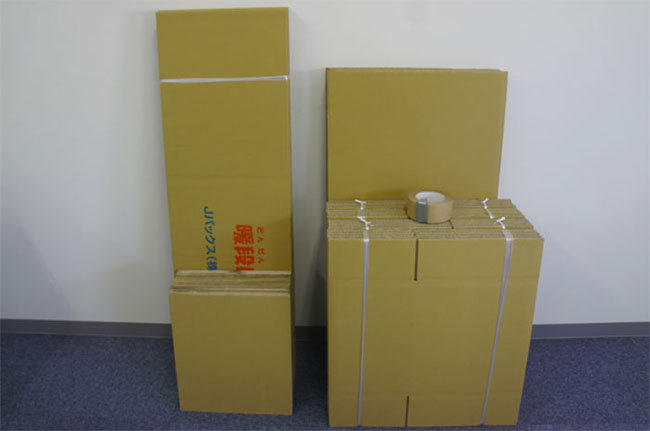 The beds are the invention of J Pack, a smart-thinking Japanese paper manufacturer. They were first distributed to survivors of Japan’s Tohuku earthquake back in 2011 and now they’re being used again to help those displaced in Kumamoto. 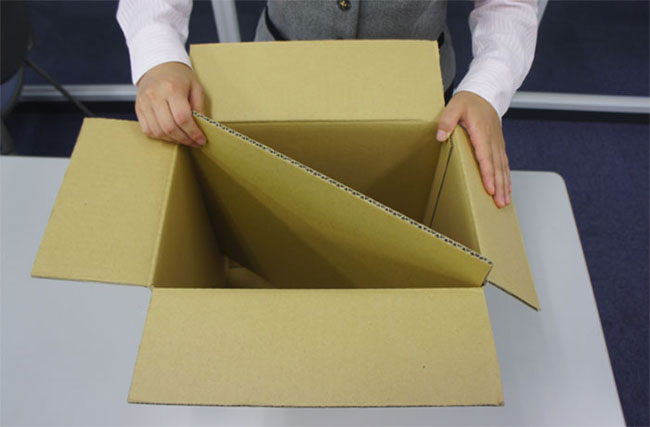 They come in a single box but they turn into a bed once assembled. They’re more than just a place to sleep however, as they also come complete with privacy partitions and under-bed storage boxes where you can neatly stow your belongings. Despite being made of cardboard, these beds are anything but flimsy and can hold the weight of up to 20 people! Now that’s what we call thinking out of the box. 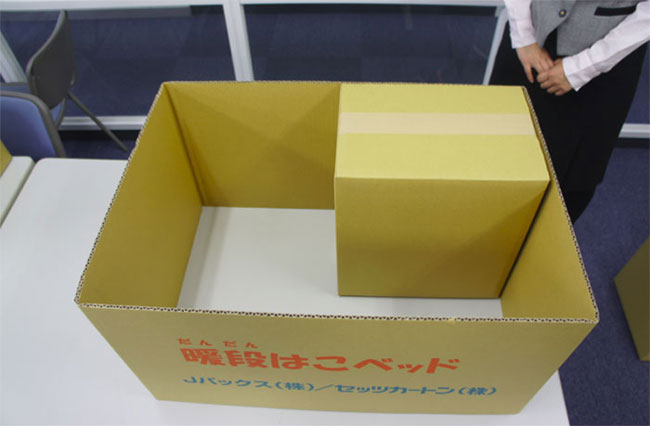 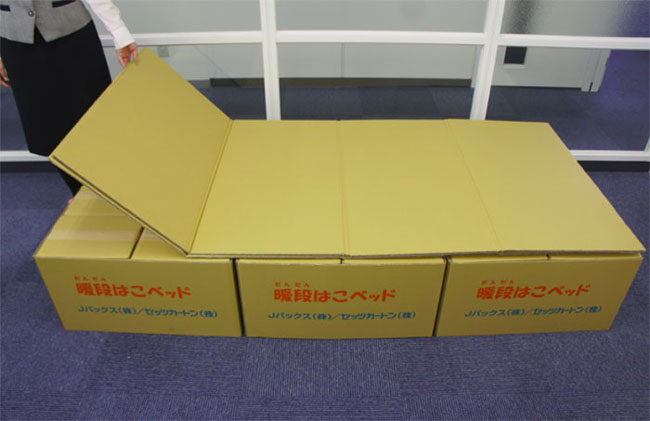 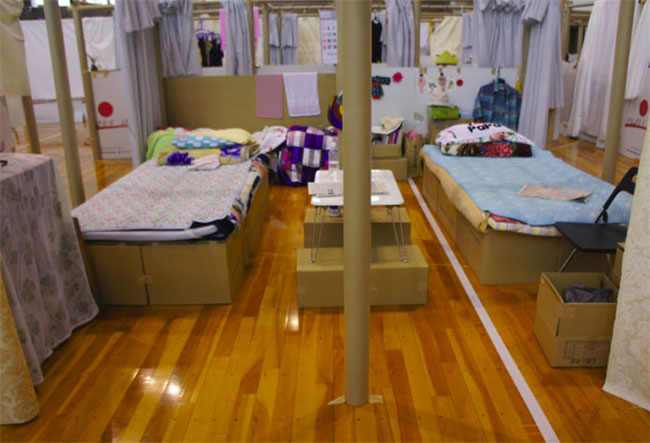 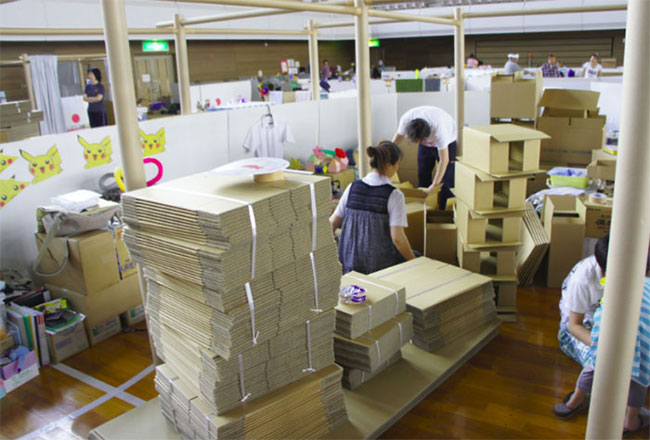 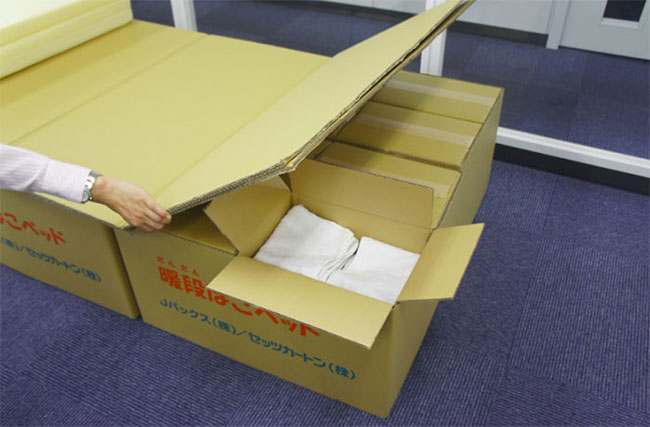 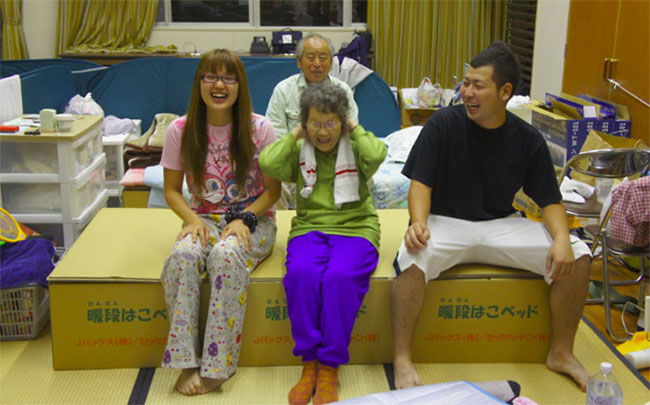 Street Artist Built A Wall Around Donald Trump’s Hollywood Star
This Photographer’s Business Card Changes Color Constantly And Never Looks The Same
Drift Away: Beautiful Handcrafted Eco-Friendly Jewelry Made From Driftwood And Bioresin
'I Survived 2020' Silver Commemoratives: A Perfect Gift for The Coin Collector
Origami Lava Pours From The Window Of An Abandoned Building In Catalonia
Real Estate Agent Posts 25 Of The Worst Home Design Finds By Her Fellow Agents
Offensive Plates To Insult Your Guests With Class
Hats For Social Distancing From Chinese Dynasty 1,000 Years Ago Handed Out By Paris Art Gallery To Visitors
Revenant Bear Mauls Comic-Con: Ex-'Mythbusters' Host's Annual Incognito Costume Includes Leonardo DiCaprio Corpse
Couple Spends $25,000 To Convert Old Truck Into Mobile Home And It Looks Better Than Most Apartments
90+ Kids Built This Intergalactic Space Station In The Woods Of New Hampshire
Light Up Your Dreams with Sturlesidesign’s Abstract Night Lights
26 Artists Were Challenged To Create The Whole Alphabet, One Unique Paper Letter Each
Japanese Papercraft Artist Turns Whisky Packaging Into Awesome Knight Figure
Colombian Company Creates Cardboard Bed That Can Double As Coffin
Astonishing Giant Sculptures Made From Scrap Wood By Thomas Dambo
Taipei Subway Cars Have Been Decorated To Simulate Various Sports Venues During The Coming Universiade In Taiwan
Mermaid Tights That Make It Look Like You’re Developing A Tail
Artist Creates Stuck-At-Home Dresses from Duvets to Brighten Her Isolation
Fantastic French Publicity Caravans Of Yesteryear
People Are Protecting Themselves With Funny Ultra-Realistic Face Masks
Baker Comes Up With The Spookiest Halloween Pies, And Here Are Her Best Ones
Absolutely Superb Ground Meat Sculptures by Kieran Gormley
A Night Stroll Along The Milky Way In Central China Inspired By Vincent Van Gogh’s Starry Night
An Artist's Grocery List Becomes A Giant Monument In Central Park
These Quirky Mini Bikes Are Actually Stands For Larger Bikes
These Fragile Paper Cuts Reveal The Intricate, Swirling Forms Of Nature
Charming Dog Head Stool By Paolo del Toro
Ed Gein Style Horror Jacket Is The Most Terrifying Jacket Ever
"The Value of Food: Sustaining a Green Planet" Exhibition at the Cathedral of St. John the Divine
boxes, brilliant, earthquake, helps, japan, victims