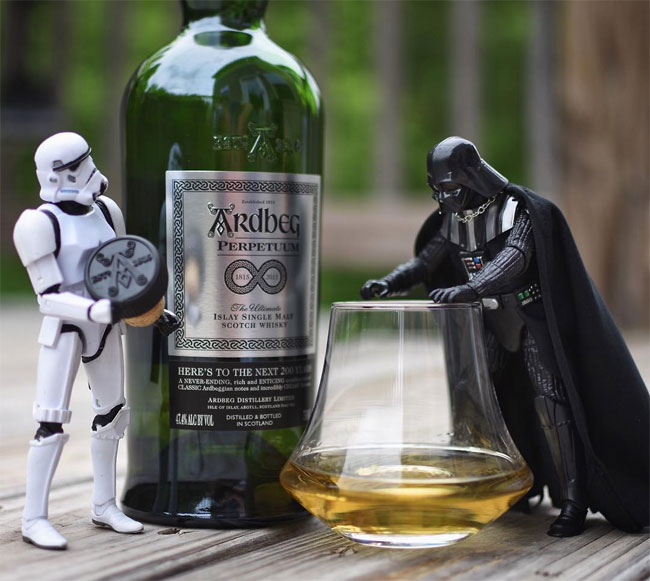 These Storm Troopers might’ve finally found the droids they’re looking for—but instead of a couple chatty robots, they’ve got bottles of whiskey. A scotch lover who fittingly calls himself Scotch Trooper (aka @scotch_trooper) photographs the toy soldiers playfully interacting with the brown liquor in a myriad of ways: they unbox massive bottles, enjoy a nice pour, and do what they do best—guard the liquid with their guns drawn.

Some nights call for a new dram and a story from a long time ago in a galaxy far far away… or from Islay. #laphroaiglore #islay #starwarsblackseries #starwars #laphroaig

Sometimes, Darth Vader even makes an appearance to express his admiration for the beverage. For those who fancy themselves Star Wars fans and whiskey enthusiasts, the images combine the best of both worlds by imagining a reality in which the two seemingly disparate subjects make perfect sense together.

These are the Whiskies we were looking for. One for you, and one for me. #Glenfiddich #StarWars #starwarsblackseries

"Never tell me the odds." Nothing better than unboxing a new bottle. Even one you have had many times before. #StarWars #Macallan #TheMacallan #macallan12

Join me, and together we can rule the galaxy… Lord Vader has made his choice clear on this #WhiskeyWednesday. May the 4th be with you on this Star Wars Day. #Michters #MichtersWhiskey #MayThe4th #StarWars #StarWarsDay #MayThe4thBeWithYou #MayTheFourth #starwarsblackseries

Some friends instinctively know when you've opened a bottle for the evening. But what better way to enjoy a quality dram than with some friends. So, always be prepared. #starwars #starwarsblackseries #starwarstoys #Balvenie #TheBalvenie

It's an older style design… Kinda like us. #HighlandPark #HighlandParkWhisky #HP12 #starwarsblackseries #StarWars

Enjoying #WhiskeyWednesday with a walk on the Rye Side.

Nothing like the anticipation of opening a new bottle. Side Note: new post available on my blog. "Chronicles of the Scotch Trooper (part 2)" (link in bio) #whiskyblogger #StarWars #StarWarsToys #instatoys #Laphroaig

Enjoying a dram is always best with friends. #MonkeyShoulder #StarWars

Someone is a little frustrated that this bottle of Balvenie 17yr Peated Cask has yet to be opened. And I can’t blame him.

Clones can be Irish too! On this Whiskey Wednesday, wishing you all a wonderful St. Paddy's Day tomorrow. #StarWars #StPatricksDay #Irish #tullamoredew

Some troopers get all the good assignments. #lovescotch #Lagavulin200 #StarWars

Someone is pretty excited to have a dram today. #StarWars #glenfiddich

It's important to lift with your legs, not your back, no matter how excited you are to drink the contents.

Today is my Christmas. Around 17 years ago, close to when these scotches were born, the Star Wars world was buzzing about the first Star Wars film since Return of the Jedi (which I remember seeing as a 5yr old with my neighbor). Unfortunately, it lacked the same look and feel as our beloved original Trilogy and felt like a completely different set of films. And don't get me started on the Lucas "Enhancements". But today, as my daughter is now the same age as I was seeing ROTJ, I am excited to see the Star Wars world buzzing again for what looks to be an amazing film. I can't wait to feel like I'm 5 years old again. #StarWars #TheBalvenie #lukeskywalker #hansolo #princessleia

The official drink of the Dark Side (and Bounty Hunters). The Highland Park Dark Origins is the perfect dram for enjoying with your fellow Troopers or Sith Lords. #StarWars #HighlandPark @ushighlandpark @highlandparkofficial