The Real Objects Of Nature Preserved In Acrylic Cubes 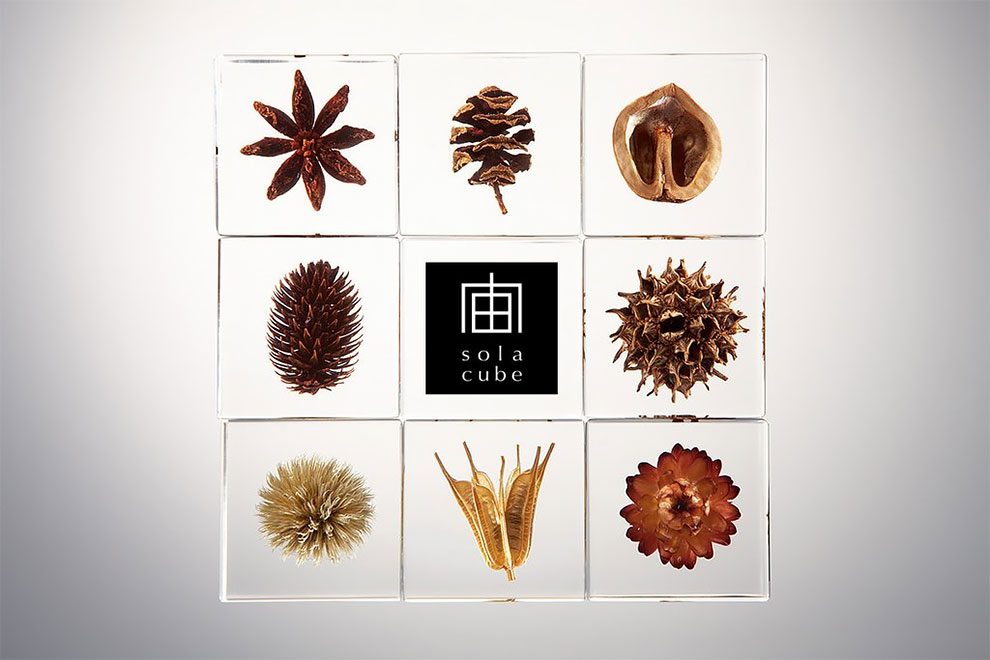 3.8 billion years ago life began on earth. And over millions of years multicellular life evolved into land plants and forests. The colors and shapes of flowers, fruits and seeds all have unique purposes and are as beautiful as they are functional. Intent on showcasing the wonder and beauty of mother nature, Koichi Yoshimura developed a way to exquisitely preserve plants in acrylic cubes. He called them “Sola Cubes.”

Each Sola Cube is handmade by Japanese craftsmen and contain a real plant.

Dandelion: Its fluffy round ball acts as a high-performance parachute. When it rains the parachute closes up like an umbrella and, when it dries, it reopens to carry its seeds through the sky. 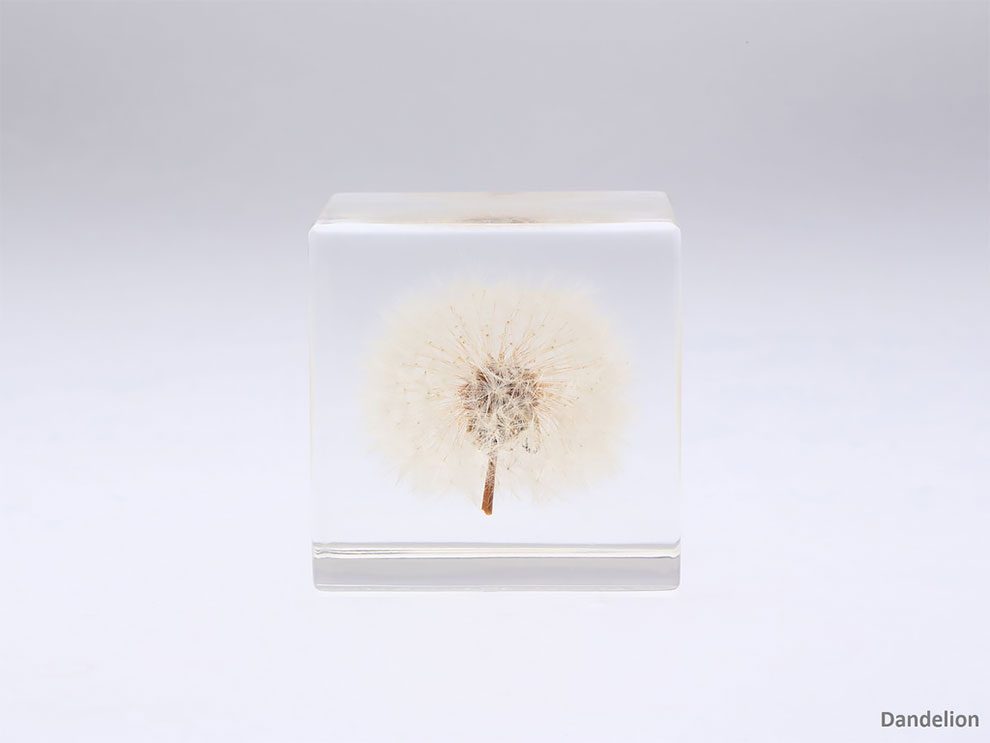 Strawflower: Native to Australia, Strawflowers are thought to have evolved in such a way as to prevent moisture from being easily lost on that very dry continent. 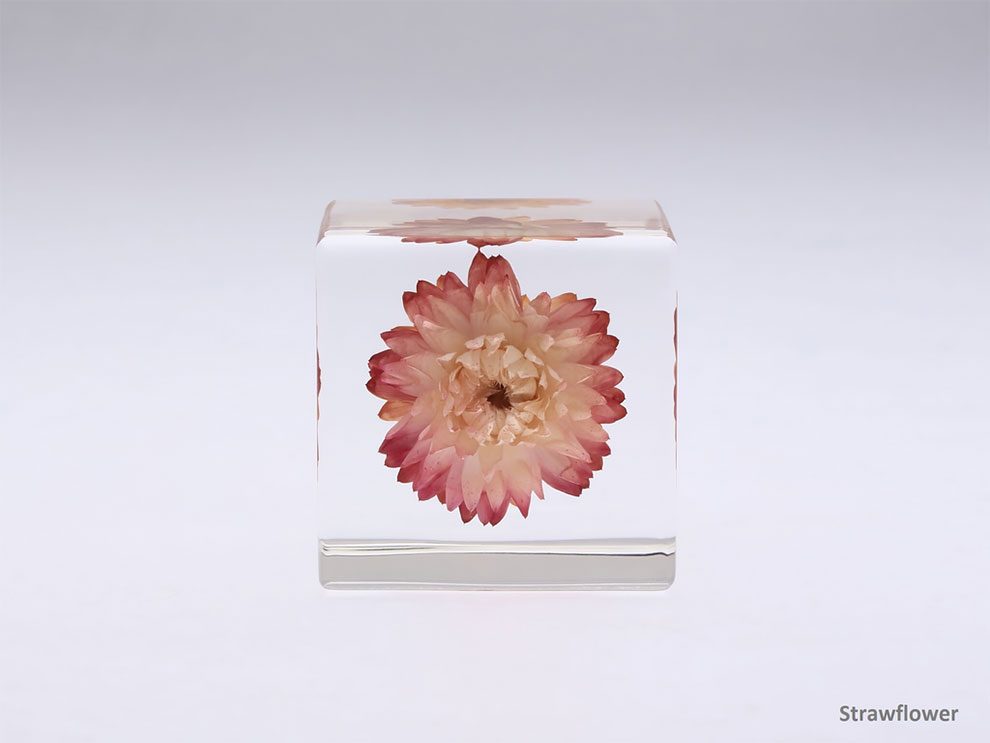 Karamatsu: Also known as Japanese Larch, its name comes from the way its leaves are attached resembling a pine tree (matsu) in the Chinese-style painting (kara-e). Its pine cone will open itself when dried, allowing the seeds in between to fly far. 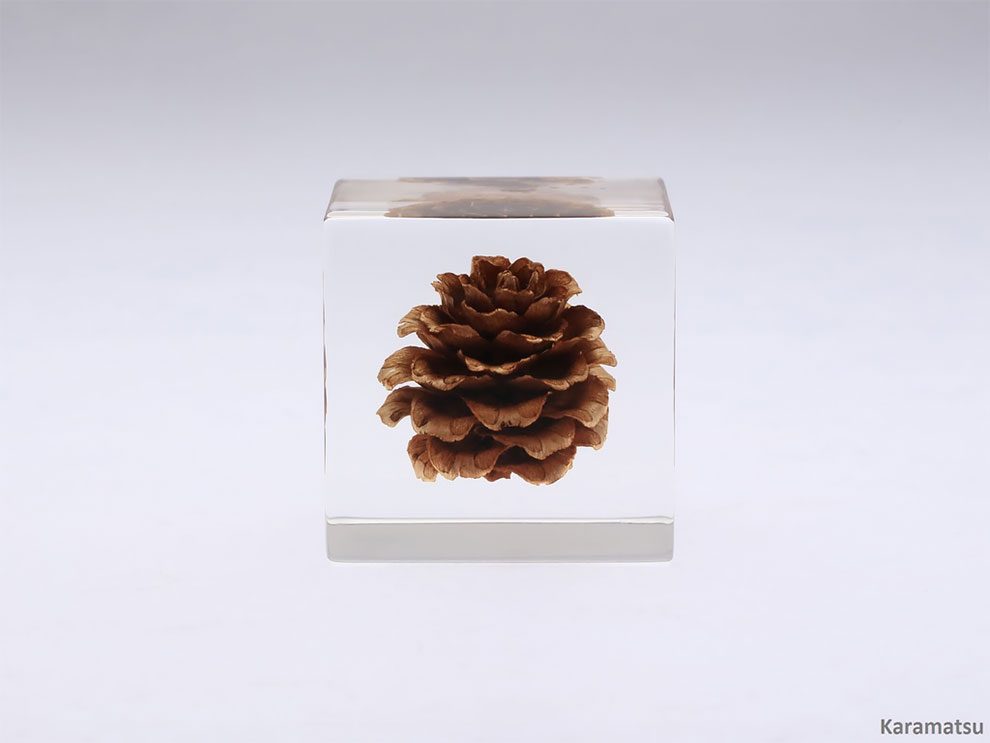 Yellow fennel flower: When the fruits of this flower dry, they split open, and the seeds come out. For many generations, these seeds have been used in the Muslim world as medicine, and in Europe to add aroma to sweets. 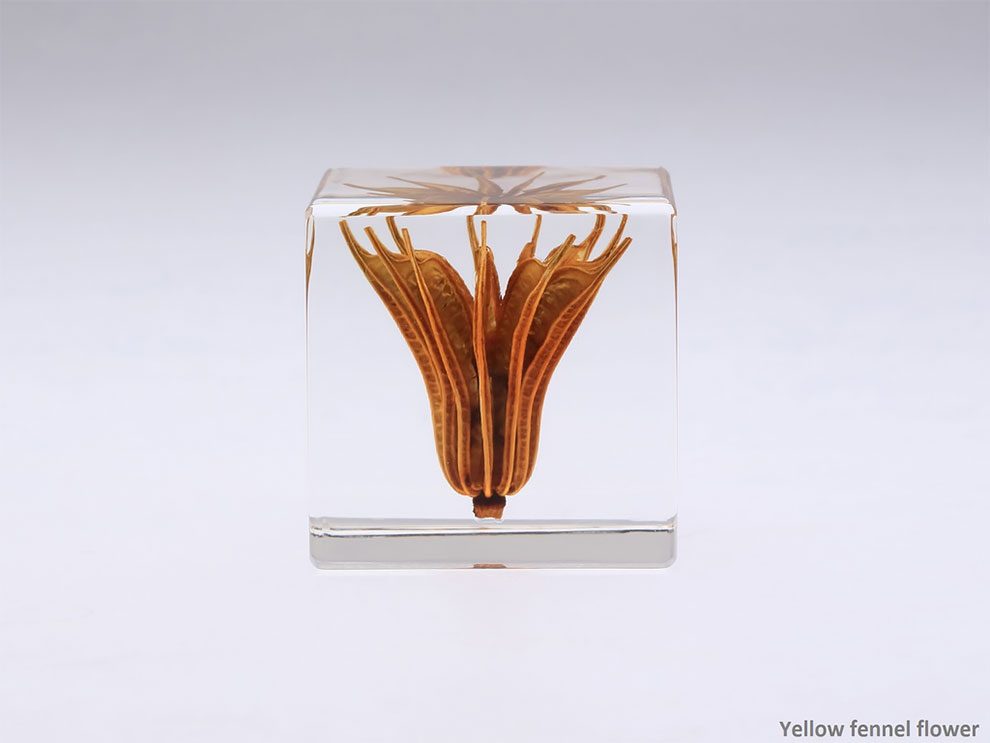 Velvetleaf: The fruit has approximately a dozen cubicles, and each will tear vertically when ripe, then ready to spread the seeds. The seed is covered with a hard shell, which can hide in soil for 20 years before it begins to bud. 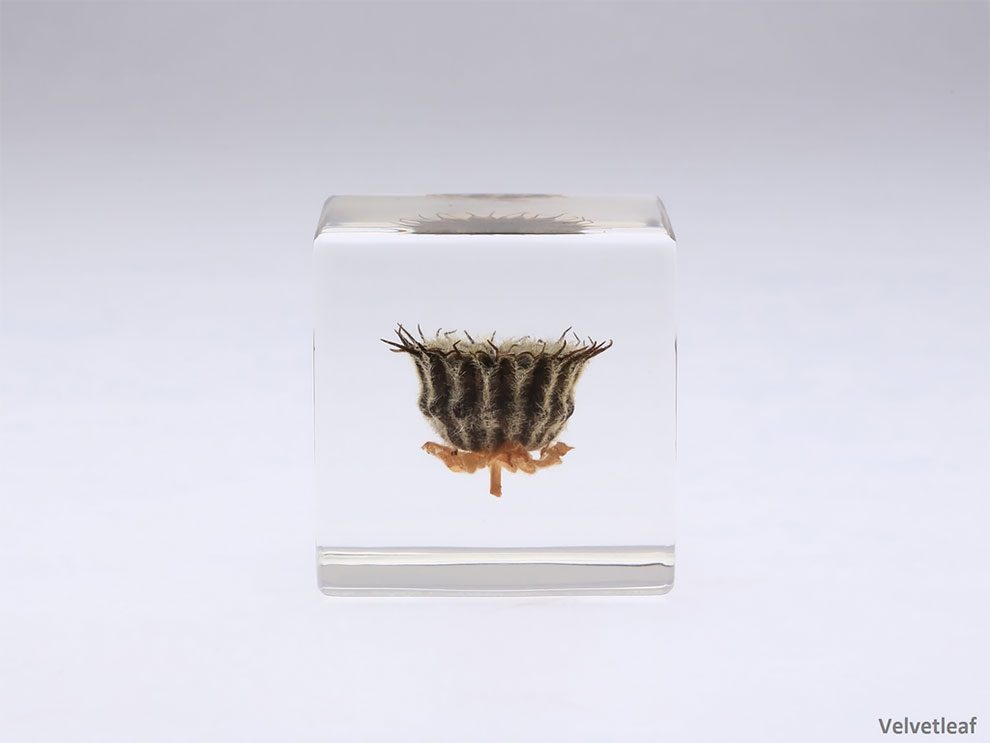 Eucalyptus: There are more than 700 species of eucalyptus and most are native to Australia. Encapsulated here are the capsules of the diverse flowering tree and shrub.

Sea lavender: This colorful flower hails from the Mediterranean region. They retain their color for long periods of time and are popular as dried flowers, which earned them the nickname “everlasting flower.” 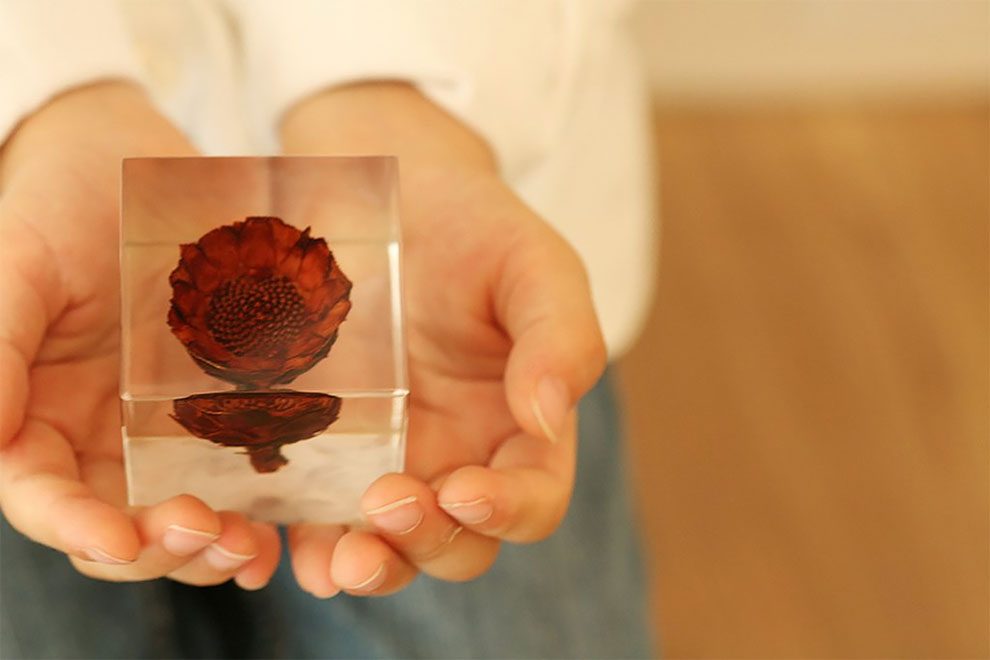 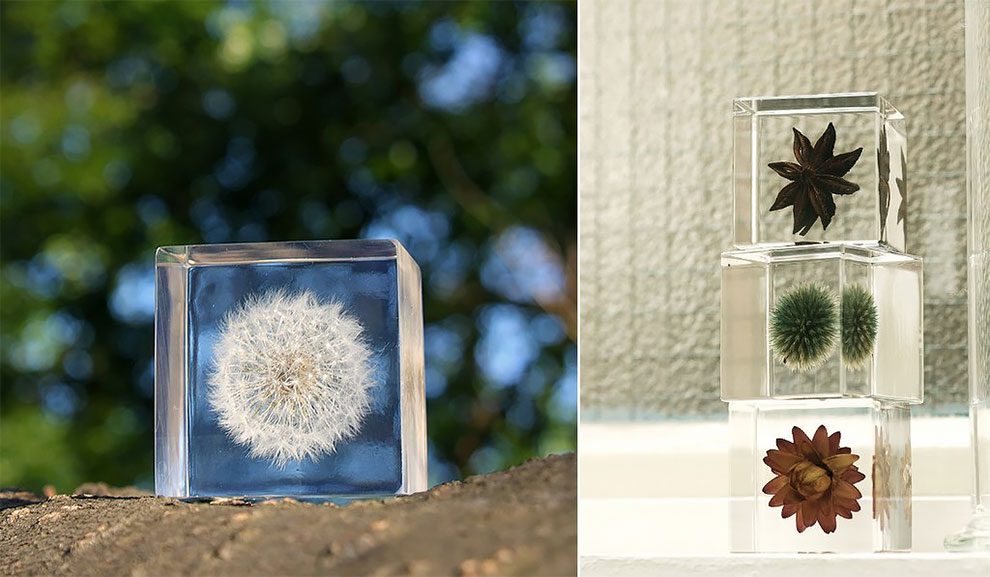 Coffee Kiss by Jang Woo-Seok
New Yorker Creates The Funkiest Staircase Ever, And It’s For A Good Cause
Original Jinglers: The Only Jeans You Can Hear Coming
Stunning Jaguar F-Pace Camouflage
This Stunning Star Wars Livery For LATAM Boeing 777
Illustrator Documents The Things She Observed In England’s Countryside
Artist George Coghill Creates Funny Cryptozoology and Paranormal Patches
Felt Artist Packs Adorably Realistic Cat Heads Into Furry "Cat Frame" Portraits
A Giant New 5,000-piece CMYK Color Gamut Jigsaw Puzzle By Clemens Habicht
Anonymouse Are Opening Tiny Shops For Mice In Sweden
Samurai Bottle Helmets Are Here To Fiercely And Elegantly Adorn Your Bottles Of Booze
No Cat Lover Will Be Able To Resist These Cozy Curled-Up Cats As Decorative Ceramic Plates
First Ever Jewelry Collection For Bearded Men
Human Salt Lick - The Most Hipster Christmas Gift Of All Time
Lifelike Sculpted Figures And Immersive Monochrome Environments By Hans Op De Beeck
This Magic Light Shelf By ilsangisang Always Shines A Spotlight On Things
A French Artist Adds His Touch to Dull Street Objects, And We Wish We Had Heroes Like Him in Every City
Designer Transforms A Boeing 737 Jet Engine Into A Massive Chair
Cristiano Ronaldo’s New Bust Will Give You Nightmares
After Watching Chernobyl, Couple Decided To Design Their Apartment In Soviet Style And Listed It In On Airbnb
Molten Glass Is Hand Blown Into These Wood Pieces To Make Contemporary Sculptures
Plastic Beauty: LEGO Unveils New Flower Bouquet Collection
Daughter Brings To Life Her Dad’s Dream For A Caravan, Taken From Plans Found In His Secret Wartime Diaries During His Time As A Japanese Prisoner Of WWII
Famous Electronics Brands Rendered As An Alphabet Of Stylish Products
acrylic, cubes, nature, objects, preserved