Out Of This World: Magnificent Entries For The UK Astronomy Photographer Of The Year 2017

The following photos are shortlisted in 2017’s Insight Astronomy Photographer of the Year. The awards will be announced on September 14, and the exhibition opens September 16 at The Royal Observatory Greenwich. 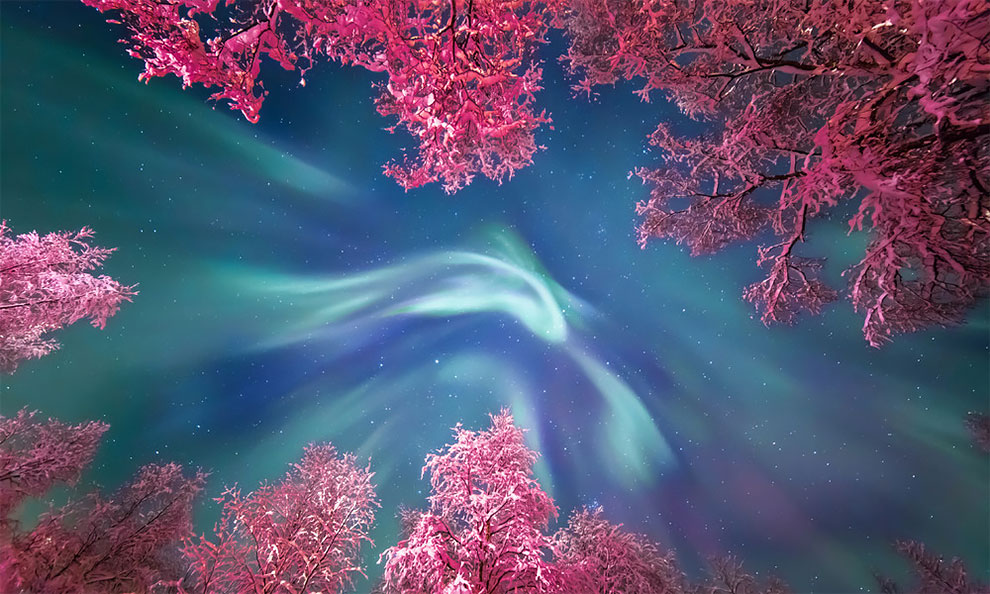 During an astrophotography tour of the Murmansk region with Stas Korotkiy, an amateur astronomer and popularizer of astronomy in Russia, the turquoise of the Aurora Borealis swirls above the snow covered trees. Illuminated by street lamps, the trees glow a vivid pink forming a contrasting frame for Nature’s greatest lightshow. (Photo by Yulia Zhulikova/National Maritime Museum/The Guardian) 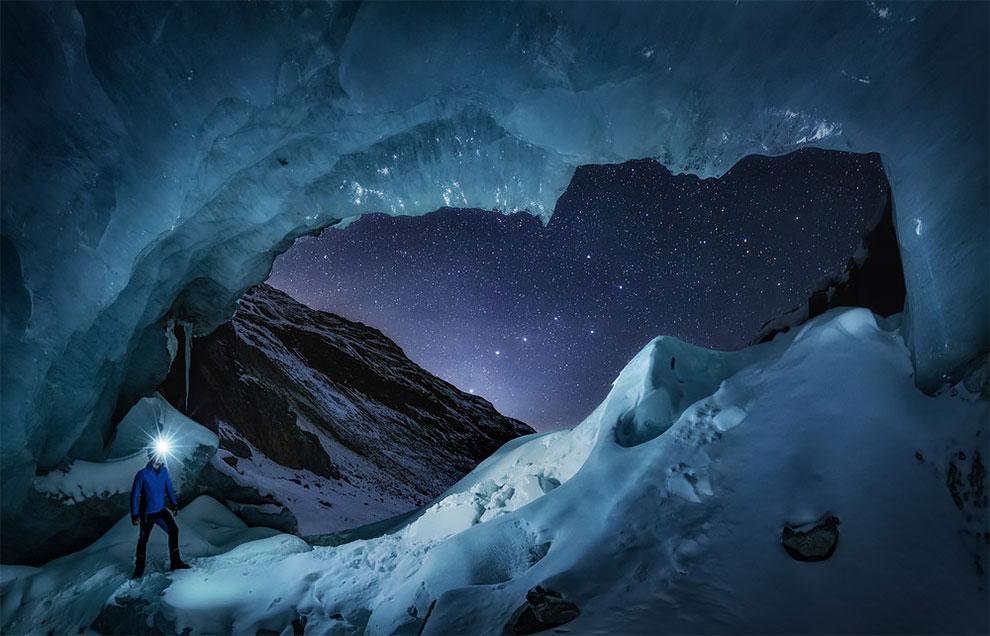 A stargazer observes the constellation of the Big Dipper perfectly aligned with the window of the entrance to a large glacier cave in Engadin, Switzerland. This is a panorama of two pictures, and each is a stack of another two pictures: one for the stars and another one for the foreground, but with no composing or time blending. (Photo by Nicholas Roemmelt/National Maritime Museum/The Guardian) 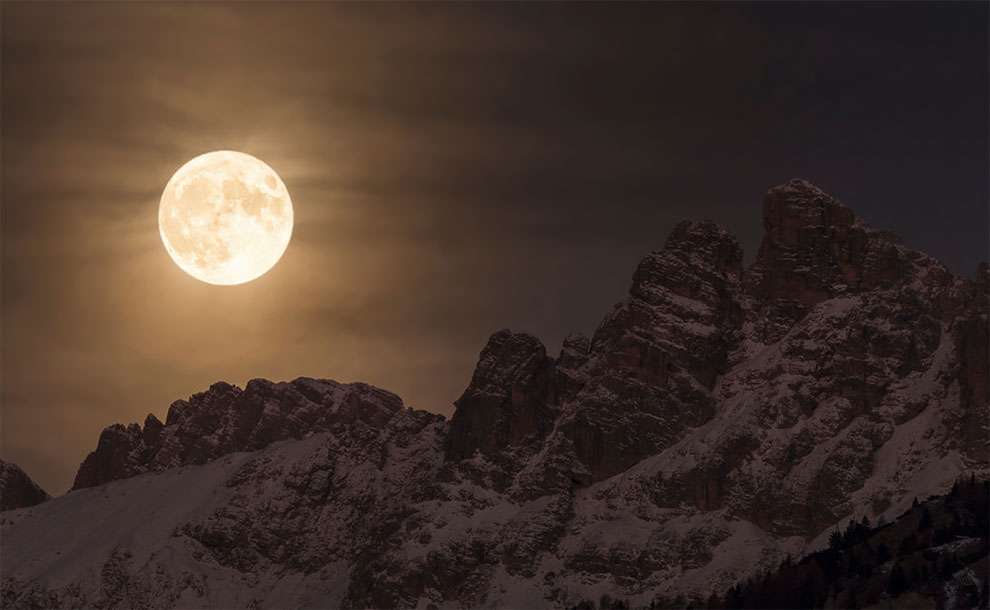 The magnificent sight of the Super Moon illuminating the night sky as it sets behind the Marmarole, in the heart of the Dolomites in Italy. On the night of 14 November 2016, the moon was at perigee at 356.511 km away from the centre of Earth, the closest occurrence since 1948. It will not be closer again until 2034. On this night, the moon was 30% brighter and 14% bigger than other full moons. (Photo by Giorgia Hofer/National Maritime Museum/The Guardian) 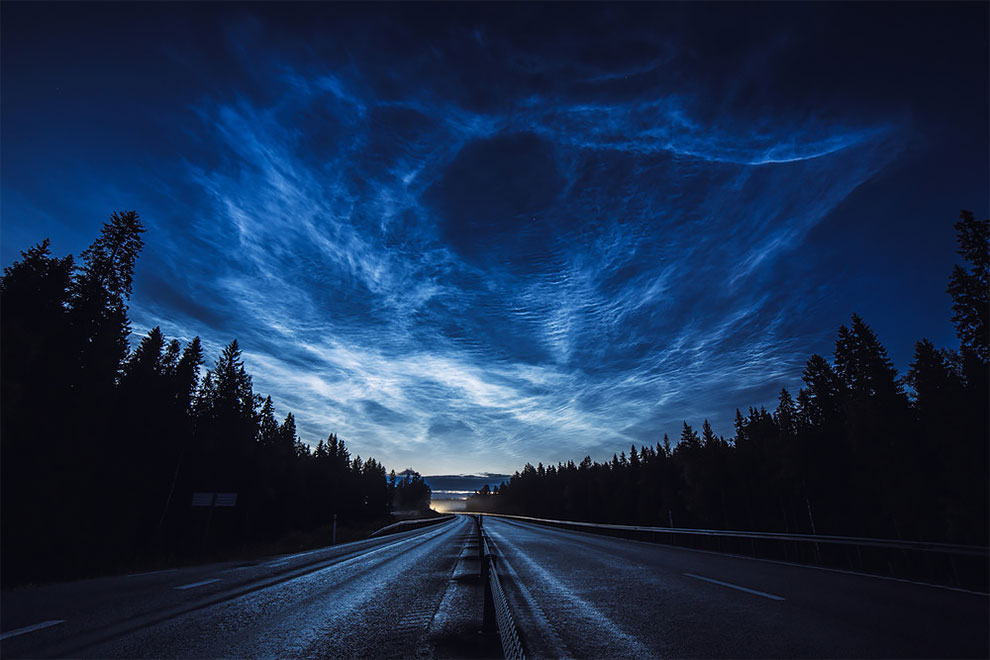 Noctilucent clouds stretch across the Swedish sky illuminating a motorcyclist’s ride home in this dramatic display. Noctilucent clouds are the highest clouds in the Earth’s atmosphere and form above 200,000 ft. Thought to be formed of ice crystals, the clouds occasionally become visible at twilight when the sun is below the horizon and illuminates them. (Photo by Ruslan Merzlyakov/National Maritime Museum/The Guardian) 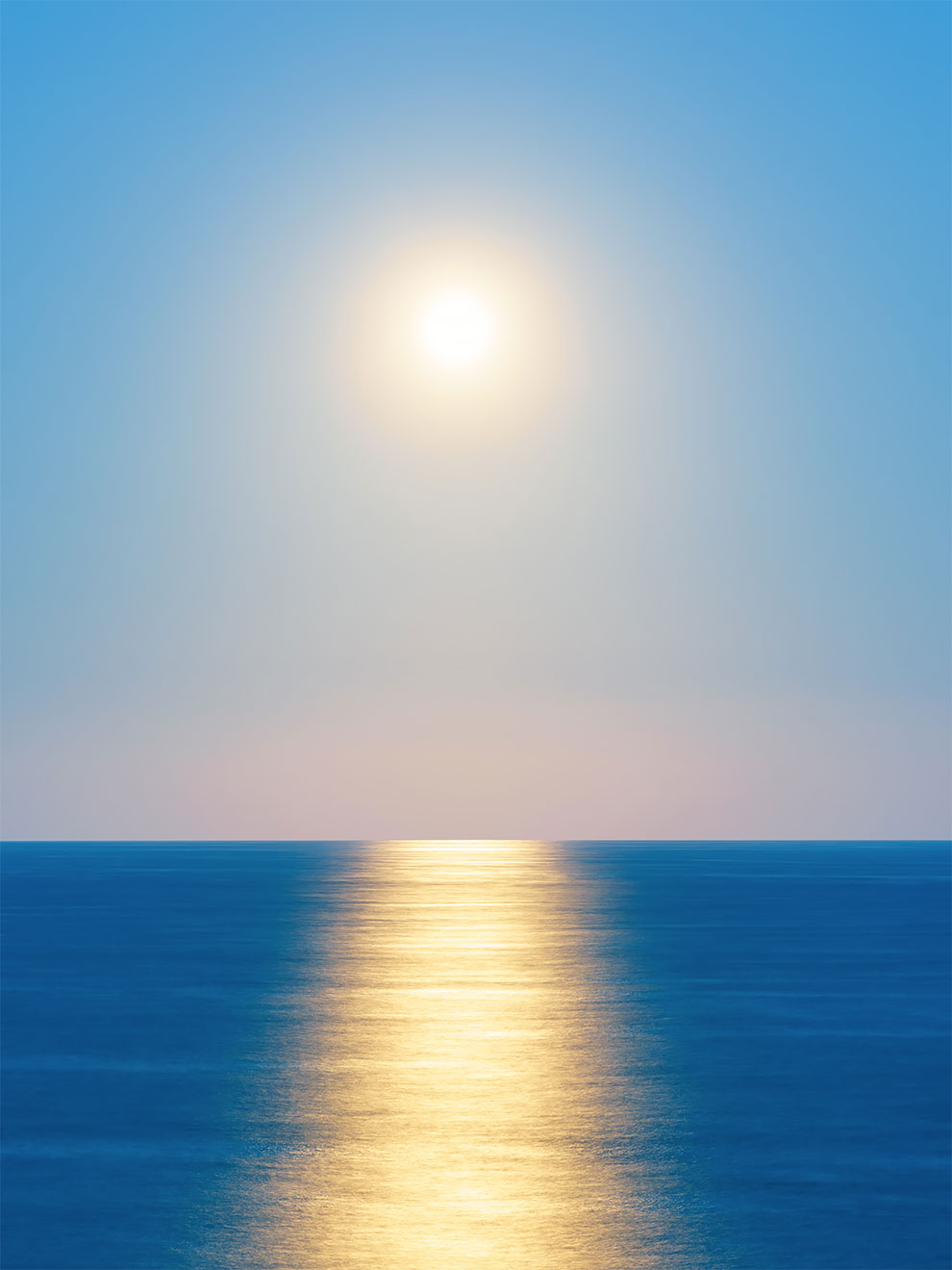 An unexpected shot of the moon rising over the glistening ocean off the Wairarapa coast, bearing a remarkable resemblance to the sun. As the photographer was capturing the sunset over Castlepoint, he looked over his shoulder to see the moon rising behind, reflecting off the wide expanse of the Pacific Ocean, and it became the new subject of his image. (Photo by Joshua Wood/National Maritime Museum/The Guardian) 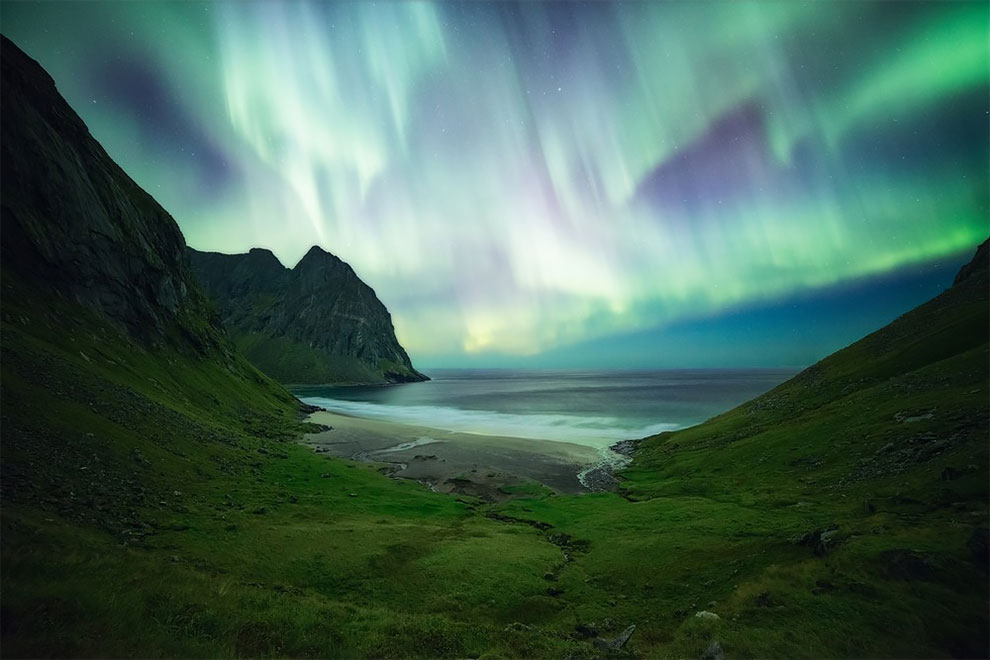 After a long hike from his small cabin to Kvalvika, Lofoten Islands in Norway, the photographer arrived at the slopes above the beach around midnight. During the hike the auroral display was relatively weak, but when he made it to the beach the sky ignited in a colourful spectacle of greens and purples framed by the mossy, green landscape. The image is stacked from six different exposures to combat high ISO and thermal noise in the foreground. The sky was added from one of these exposures. (Photo by Nicolas Alexander Otto/National Maritime Museum/The Guardian)

“A Battle We Are Losing”, Haitong Yu (China). 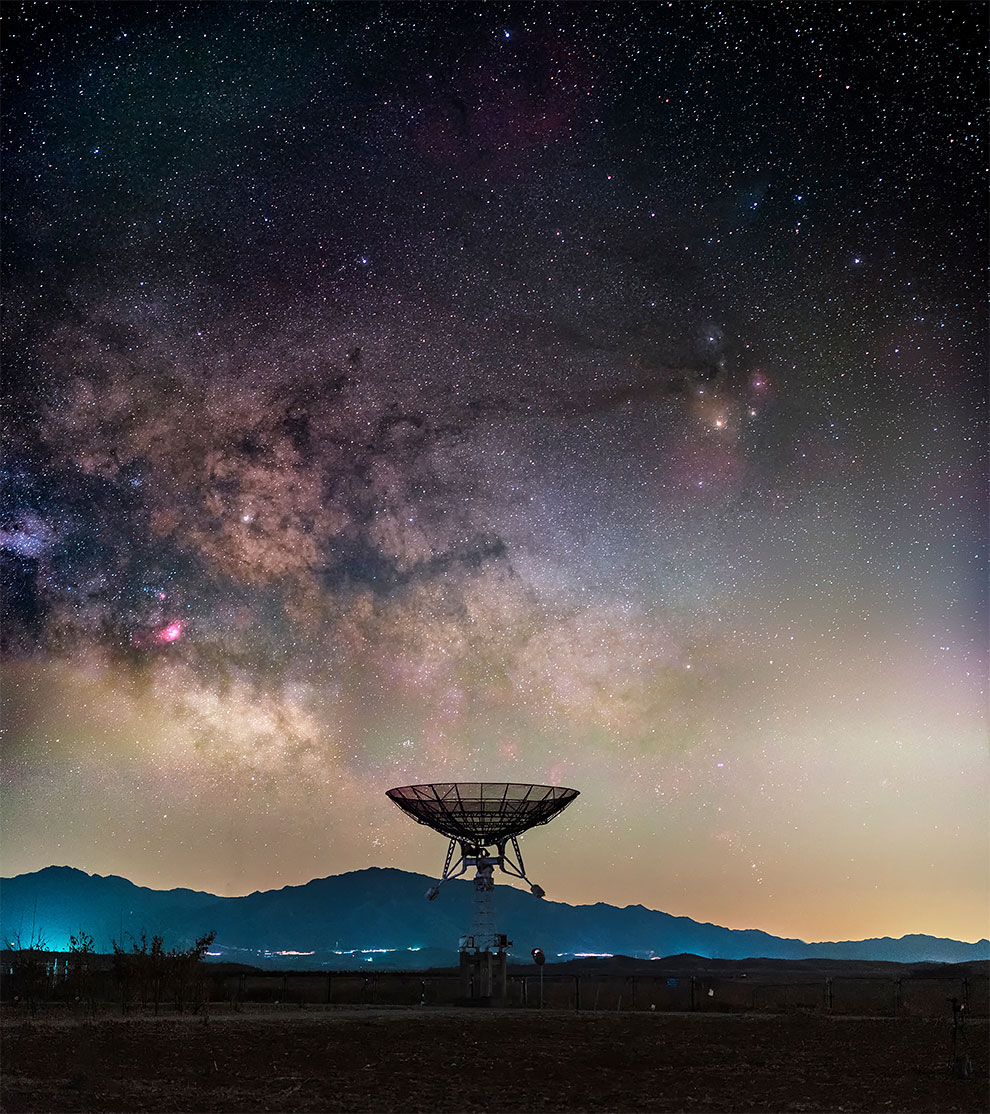 The Milky Way rises above a small radio telescope from a large array at Miyun Station, National Astronomical Observatory of China, in the suburbs of Beijing. The image depicts the ever-growing light pollution we now experience, which together with electromagnetic noise has turned many optical and radio observatories near cities both blind and deaf – a battle that inspired the photographer’s title for the shot. The image used a light pollution filter (iOptron L-Pro) and multiple frame stacking to get the most of the Milky Way out of the city light. (Photo by Haitong Yu/National Maritime Museum/The Guardian) 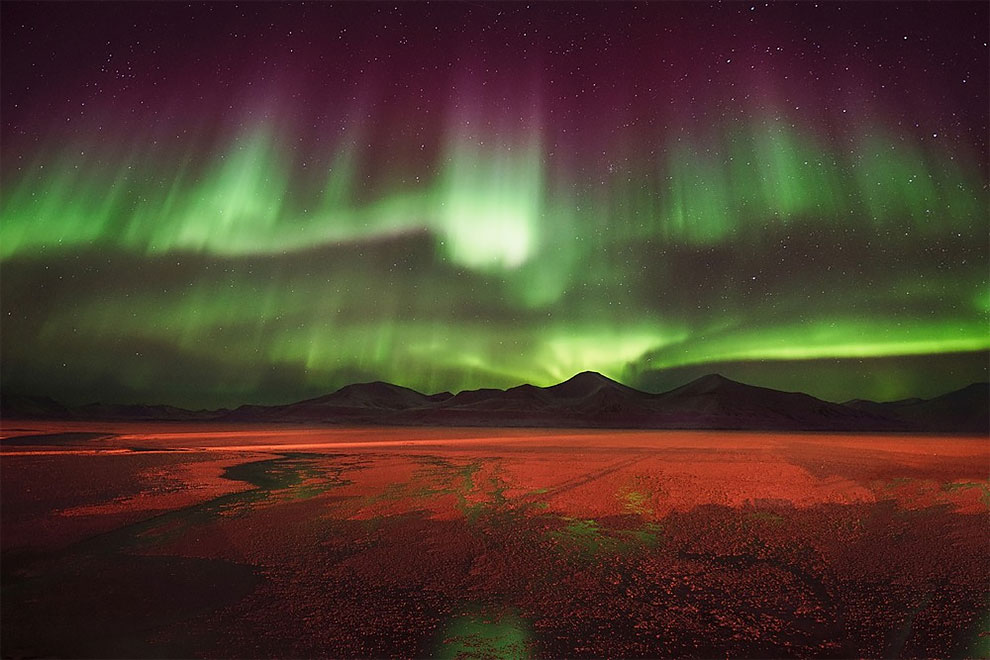 The purples and greens of the Northern Lights radiate over the coal mining city of Svea, in the archipelago of Svalbard. The earthy landscape below the glittering sky is illuminated by the strong lights of industry at the pier of Svea. (Photo by Agurtxane Concellon/National Maritime Museum/The Guardian) 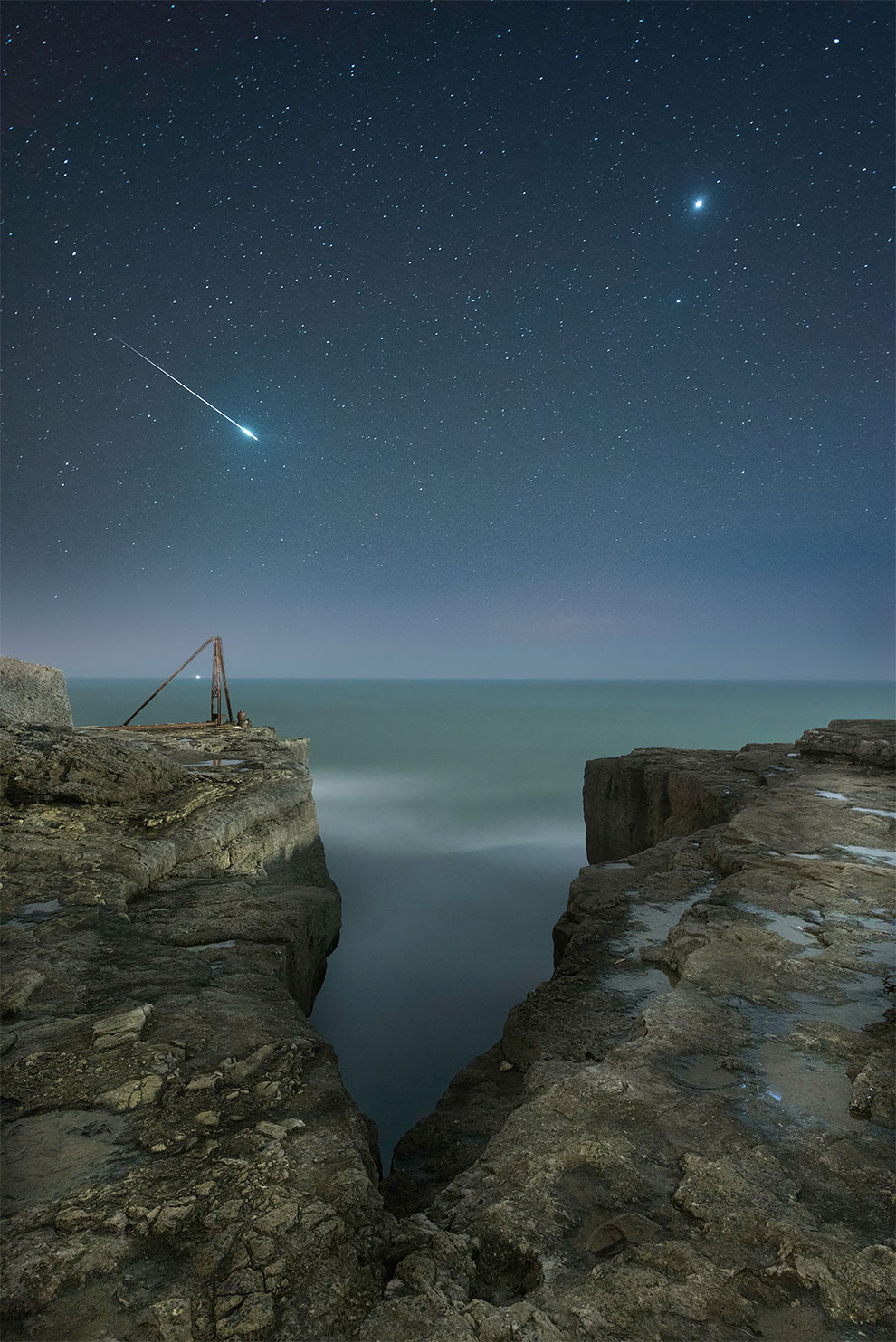 A shooting star flashes across the sky over the craggy landscape of Portland, Dorset, as our neighbouring planet Venus looks on. The image is of two stacked exposures: one for the sky and one for the rocks. (Photo by Rob Bowes/National Maritime Museum/The Guardian) 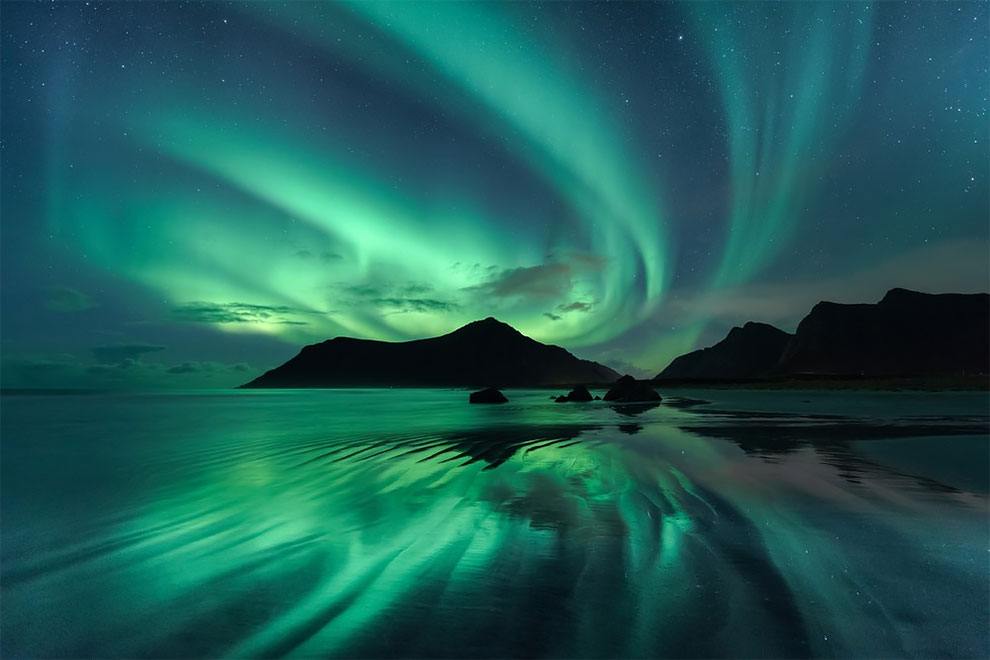 The reflection in the wave ripples of Skagsanden beach mirrors the brilliant green whirls of the Aurora Borealis in the night sky overhead. To obtain the effect of the shiny surface, the photographer had to stand in the wave zone of the incoming tide, and only when the water receded very low did the opportunity to capture the beautiful scene occur. (Photo by Beate Behnke/National Maritime Museum/The Guardian) 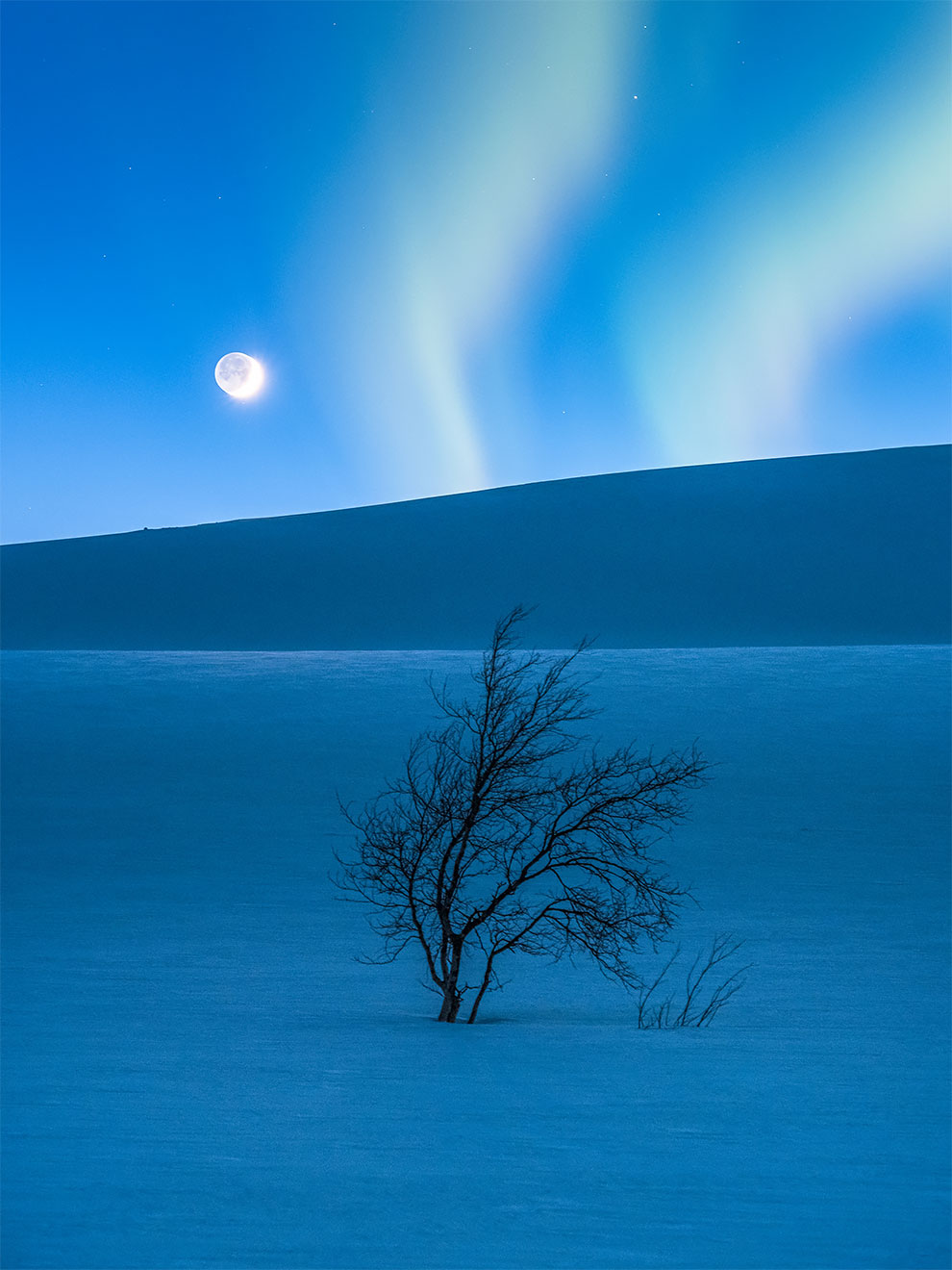 The setting crescent Moon and Mars gaze over Saltfjellet, Norway as the Northern Lights appear to emanate from the snowy landsape. The Aurora Borealis was an unexpected guest in the shot as the sun was only about ten degrees under the horizon meaning the early display came as a surprise. (Photo by Tommy Eliassen/National Maritime Museum/The Guardian) 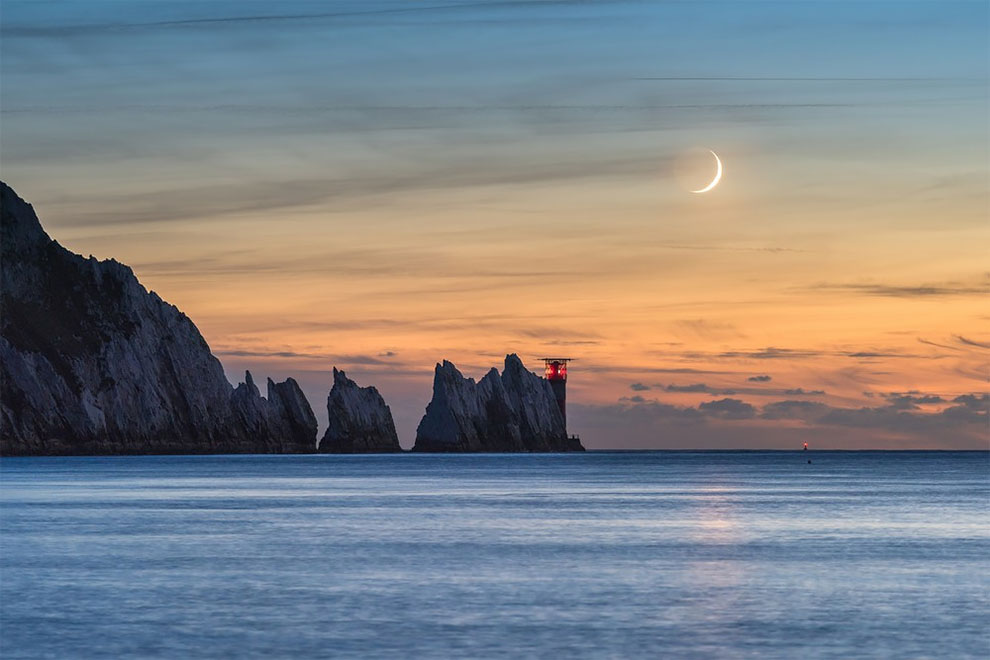 The 7% waxing crescent moon setting in the evening sky over the Needles Lighthouse at the western tip of the Isle of Wight. Despite the moon being a thin crescent, the rest of its shape is defined by sunlight reflecting back from the Earth’s surface. (Photo by Ainsley Bennett/National Maritime Museum/The Guardian) 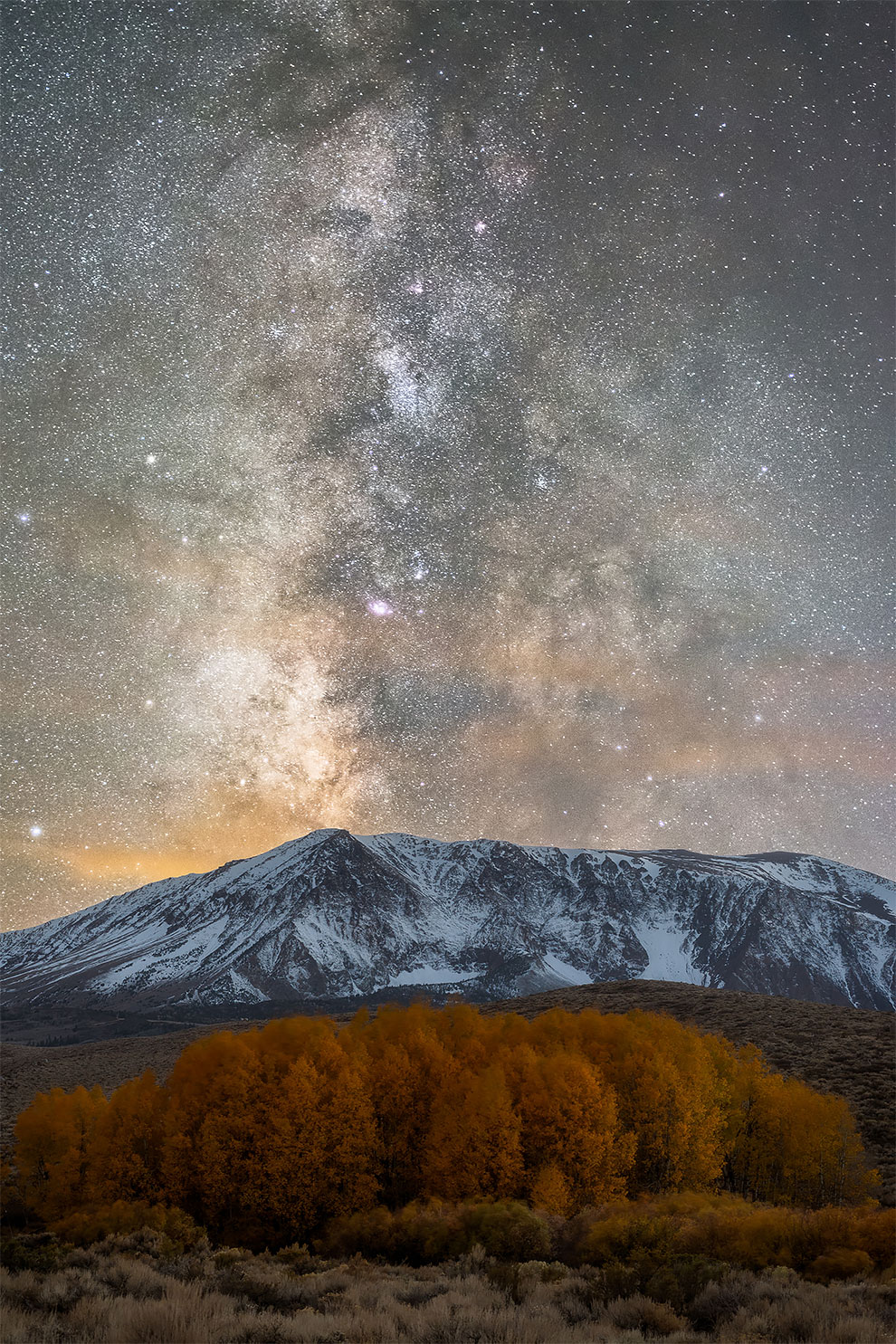 The snow-clad mountain in the Eastern Sierras, California, towers over the rusty aspen grove aligned perfectly in front of it, whilst our galaxy, the Milky Way, glistens above. (Photo by Brandon Yoshizawa/National Maritime Museum/The Guardian)

Wonderful Photos That Prove People Had More Class In The Past
Incredible Color Photographs That Show What Life Was Really Like in Britain in the 1950s
Vintage Men's Magazine: Cool Pics Of Cavalier's Beauties During The 1960s
Beautiful Women Portraits By Marta Bevacqua
Photographer Nicholas Ku Explores Urban Asia From Above
A Photographer Took Delightfully Messy Photos Of Meals In Mid-Air
Fascinating Vintage Photographs That Capture Kids Finding Fun On The Streets In Postwar London Rubble
Try Not To Gag At These Photos Of Vintage Eating Contests!
Photo of the Day: Life Is Good!
50 Winning Photos From The 2019’s Best Wedding Photo Contest
Photographer Mark Rubenstein
2017 National Geographic Travel Photographer Of The Year – Nature
Rare 'Flying Rainbow' Spotted over Southern China
Guy And Pug Take Couply Photos Cuz Sometimes Your Dog’s Your Valentine
Red Smoke Blankets the Salem Area in Oregon, Casting an Apocalyptic Glow
Absolutely Heart Melting Pictures of Smiling Babies By Sandi Ford – Newborn Photography
"I'm With Her": These Hillary Clinton Portraits Were Taken On The Campaign Trail
An Artist Has Created A Series Using Professional Make Up That Would React To The UV Light Of A Black Light
The Ashaninka, A Threatened Way of Life
Breathtaking Aerial Photos Of A Lavender Field In Southern France By Samir Belhamra
What's Cooking, Uncle Sam?
Russian Silver Age Poet Sergey Yesenin Become An Instagram Star
Prison Inmate Dances to Freedom
Our Small World Through The Lens Of Russian Photographer Sergey Maximishin
astronomy, entries, magnificent, photographer, world