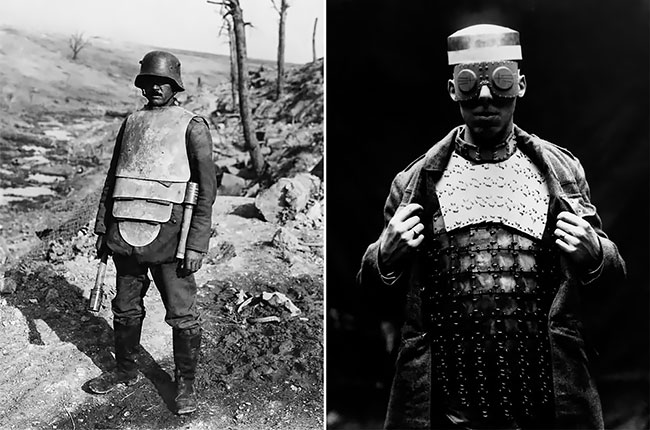 During the First World War, the size and scale of some of the weaponry produced devastating wounds and losses on soldiers. In order to provide some protection to the men in the front lines, armies explored the possibility of providing them with different types of armor.

Soldiers in the British army at the outbreak of the war were not provided with much in the way of protective clothing. The British military uniform for the time was made of hard-wearing brown khaki which did, at least, provide a measure of camouflage in the fields of France and Belgium but was not designed to provide any protection to the body of the wearer.

The British and French armies began to equip men with steel helmets in 1915 in a bid to protect the heads, one of the most vulnerable parts of the body in trench warfare, of their men from falling debris and glancing blows from bullets or shrapnel. Despite the utility of these helmets, they still left something to be desired. The German-designed Stahlhelm provided better protection to both the head and the shoulders of their soldiers. These helmets became so synonymous with the German army that allied nations proved reluctant to design similar headwear in case it led to confusion in the trenches. 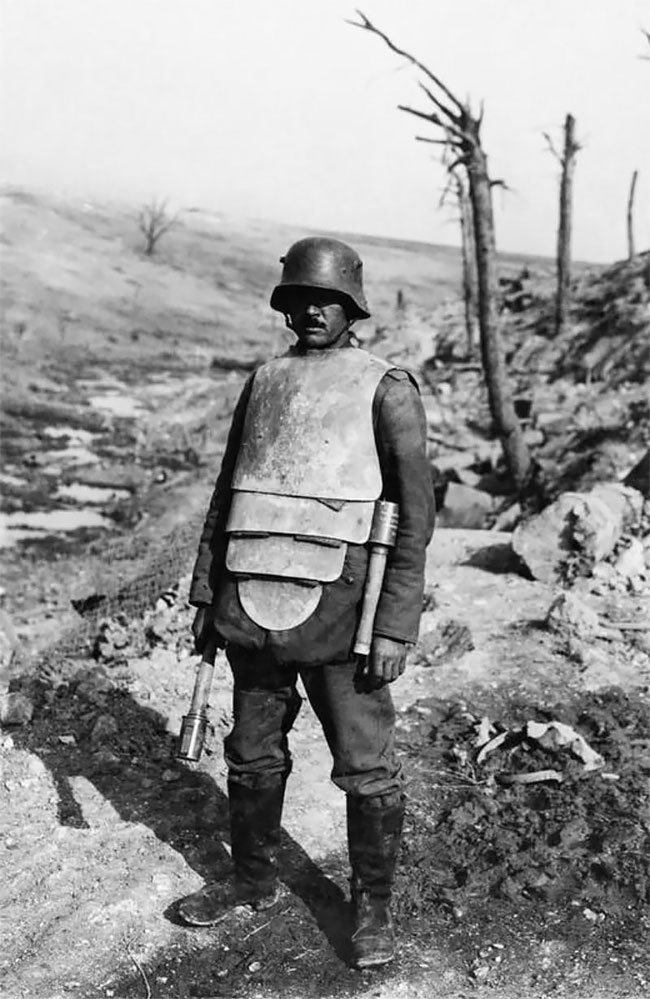 A German member of a “Trench Attack Squad” poses in steel body armor and two stick grenades. The armor, capable of stopping a pistol round but only superficially helpful against rifle fire, also helped protecting against bayonet and other edged weapons thrusts. (Getty Images) 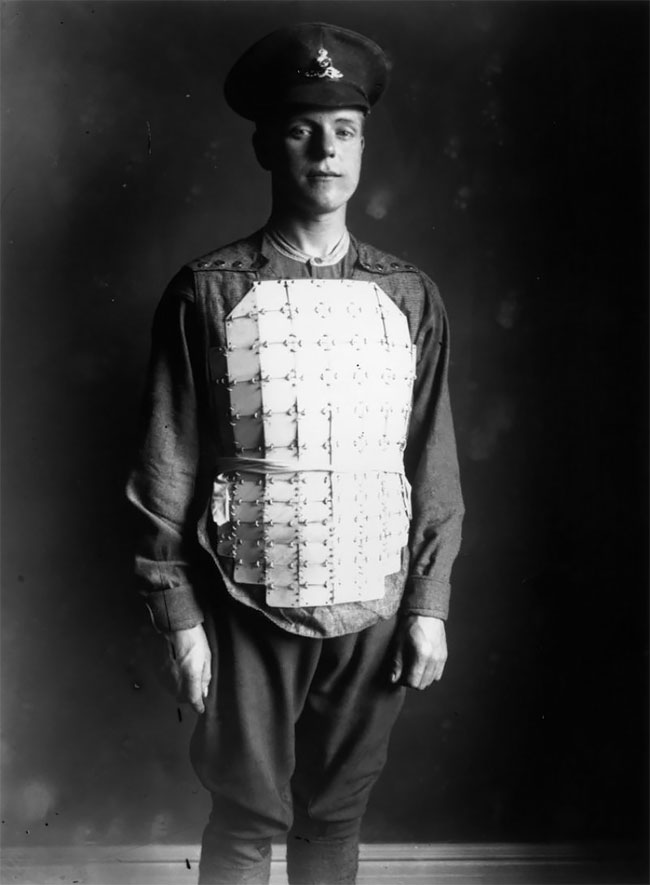 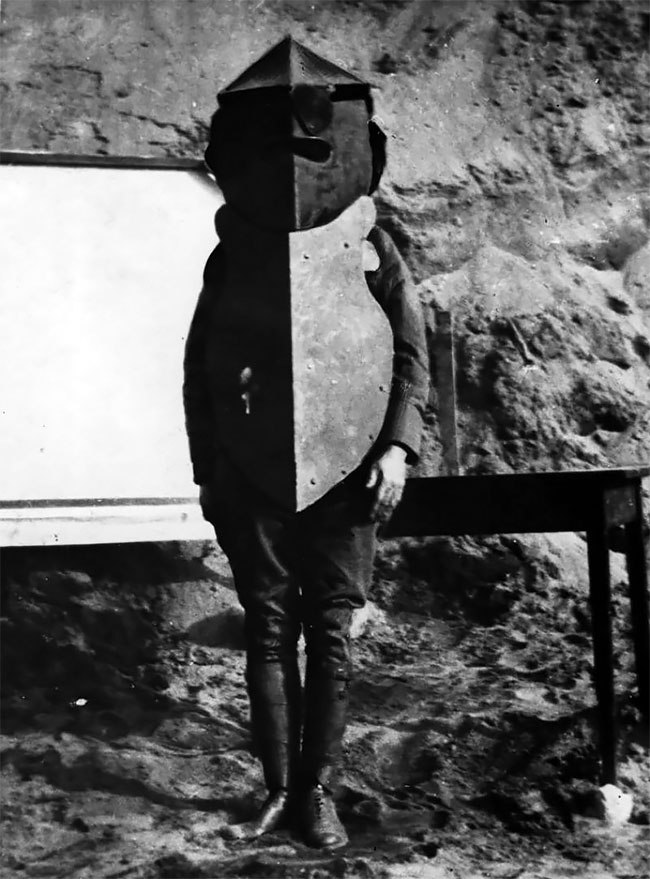 A suit of heavy body armour used by the Americans in France, ca. 1917. (Getty Images) 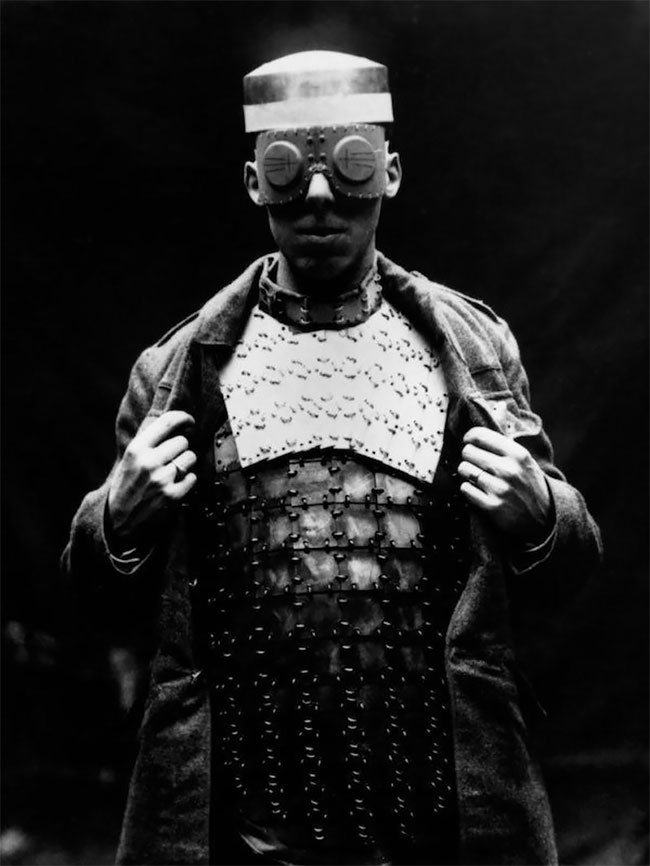 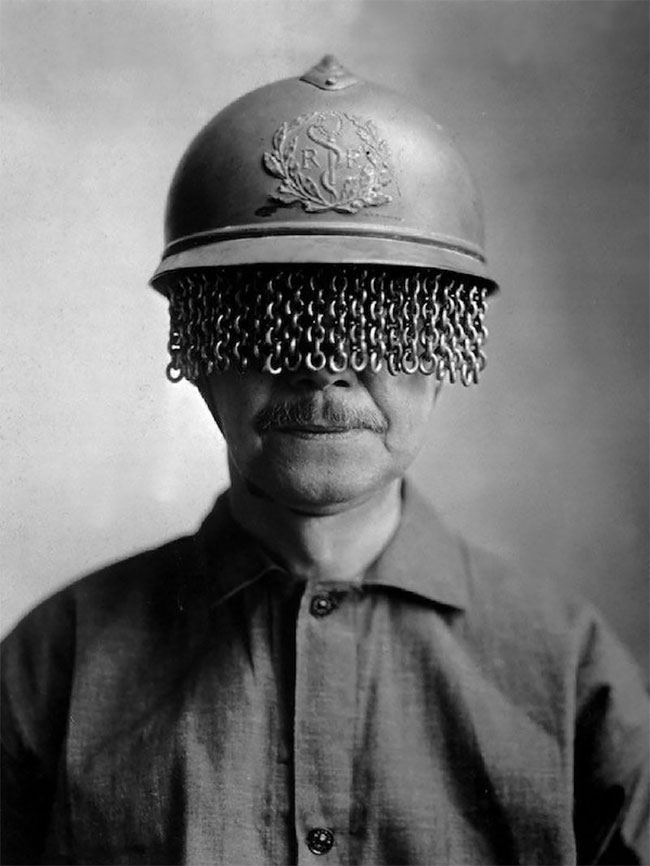 A man models a steel helmet covered with a built-on chain screen to protect a soldier’s eyes from rocks, shells and other fragments during World War I. It was created by E J Codd Company of Baltimore, Maryland. (Getty Images) 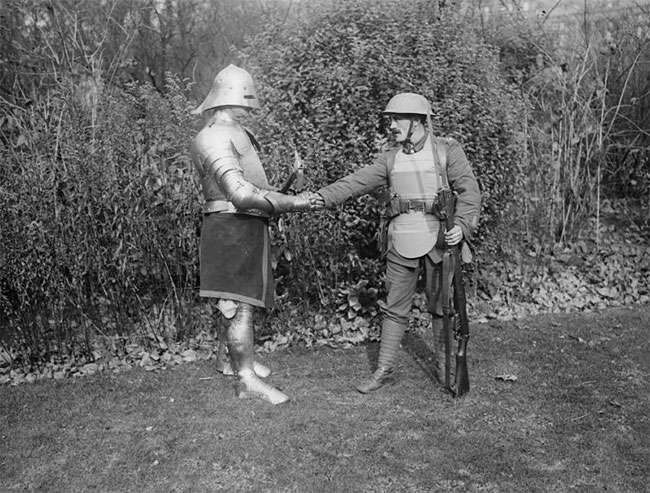 October 1917: A present day soldier armed with a rifle shakes hands with a soldier in a full suit of armour armed with an axe. (Getty Images) 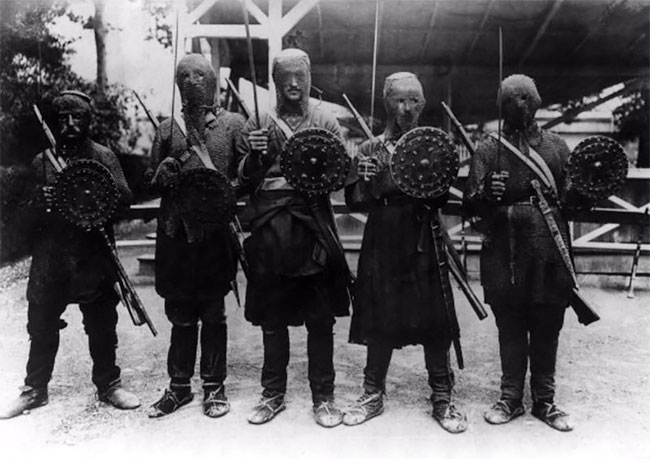 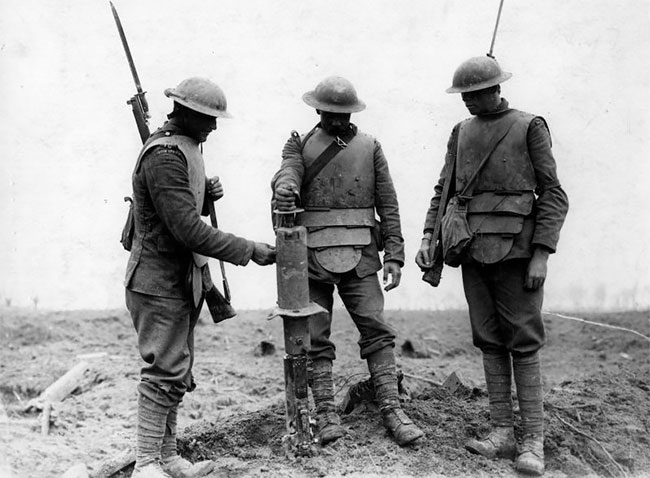 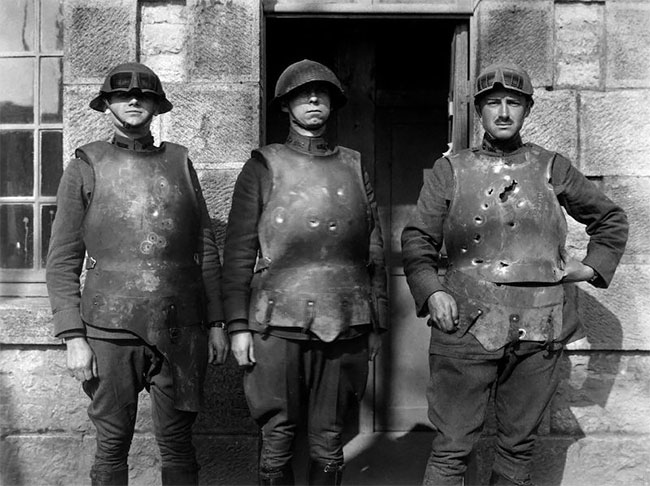 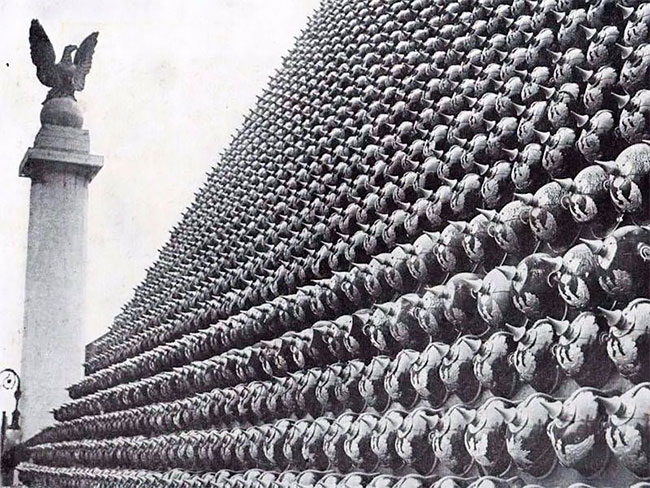 A series of German helmets displayed as a trophy in the U.S., 1918. (Getty Images)

The Paul Milinski Retro Futuristic Dreamscapes Are Serenity Manifest
Spectacular Ukrainian Crowns On Slavic Inspired Photoshoot Look Absolutely Mesmerizing
Reduce You And Your Family Into 8 Bit Family Signs
Artist Tom Galle Makes Weapons Out Of Corporate Logos
This Guy Has Built A Hobbit House In His Backyard
Brazilian Dentist Felipe Rossi Treat The Teeth Of Poor People
Artist Creates 16 Types Of Designer Packaging For Food Products To Show The Absurdity Of Brands
Spirited Away: A Miyazaki Fan Recreated The Bathing House With An Impressive Model
Memory Veil: 10,000 Strands Of Red String Beads Art Installation
Mermaid Tights That Make It Look Like You’re Developing A Tail
This Baker Turned Chernobyl And The Oklahoma City Bombing Into Cakes
Designer Creates a Unique Table Lighting Based on Brutalist Soviet Architecture and Other Things
The Superb 'Stillness in Motion' Sculpture by Olga Ziemska
Outstanding Architectural Rings By Ola Shekhtman
Playful Handmade Things by Taili Wu
These Men’s Fashion Ads From The 1970s That Will Leave You Speechless
Bizarre Sculptures by Franz Xaver Messerschmidt From the 18th Century
Amateur Culinary Artist Creates The Most Amazing Sashimi Plating
Everyone Will Love the New and Unusual Folding Beach Hammock
"The Belly Tank": A Military Drop Tank Is Transformed Into An Αerodynamic Pommel Horse
Colorful Paper Quilled Florals Burst From Delicate Line Drawings
"The Future Forest": A Group of Activists Were Made A Forest Out Of 3 Tons Of Plastic In Mexico City
These Galaxy Donuts Will Take You To Outer Space
Custom LEGO of Zelenskyy and Molotov Cocktails Raise Funds for Ukraine
armor, design, first, steel, storm, stuning

50 Obsolete Things To Prove How Much The World Has Moved On And Changed
An Incredible Welded Steel AT-AT Walker BBQ Grill
Confectioner Combines Desserts With Miniature People To Create These Fun Scenarios
There’s A Big Head Made From Reclaimed Wood And Found Objects Lying In A Park In New York
You’ll Be Surprised To Find Out What These Berlin Artists Use To Create T-Shirt And Bags Designs
This Artist Creates Gorgeous Silk Dragon Scarves
This Girl is Doing Halloween Decorations Totally Right!
Europe's First Underwater Sculpture Museum
Eco Street Murals By NEVERCREW Duo
The Elegance of The Dark Side: Stunning Sculptures of Dom Qwek
2007 ‒ 2022 by Design You Trust. Proudly hosted by WebHostingBuzz.
Privacy Policy · Terms of Service · Content Removal Policy ❤️ 🇺🇦