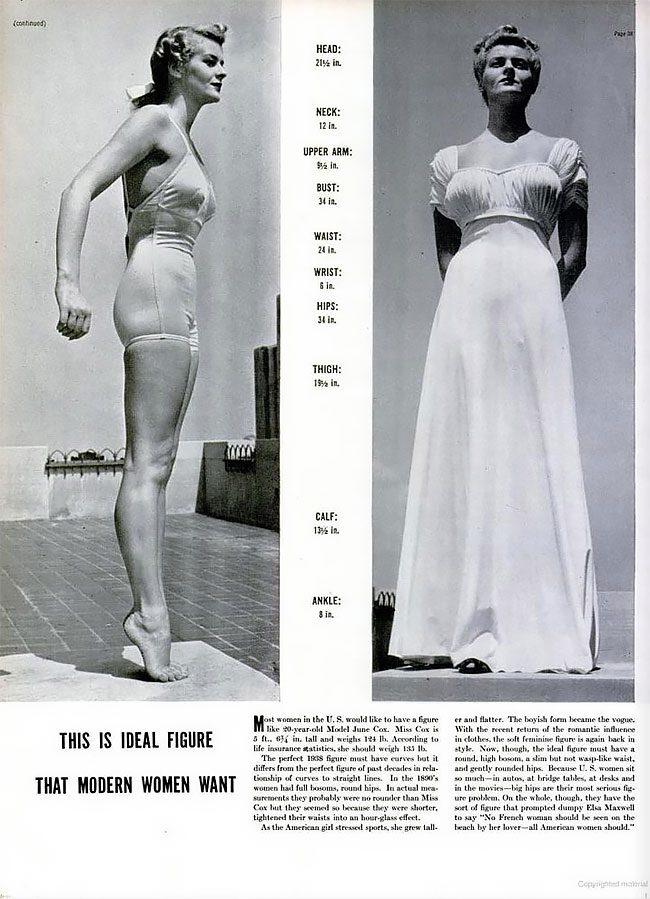 Beauty standards are always changing, but they never seem to go away. In 1938, LIFE magazine did a feature on 20-year-old June Cox, showed the model in a floor-length dress and then again in her underthings, and proceeded to praise Cox for possessing the “ideal figure.” The model stood 5 ft. 6 3/4 in. and weighed 124 lbs., though life insurance statistics, the magazine said, suggested she should weigh 135 lbs.

The magazine explained that American women’s increasing involvement in sports in recent years had made them taller and flatter, and as such, “the boyish form became the vogue.” But by the late ’30s, romantic-influenced clothing had returned to fashion, and a “soft feminine figure” was replacing the athletic form as the look du jour:

“The perfect 1938 figure must have curves but it differs from the perfect figure of past decades in relationship of curves to straight lines,” said the magazine. “In the 1890s women had full bosoms, round hips. In actual measurements they were probably no rounder than Miss Cox but they seemed so because they were shorter, tightened their waists into an hour-glass effect. Now, though, the ideal figure must have a round, high bosom, a slim but not wasp-like waist, and gently rounded hips.” 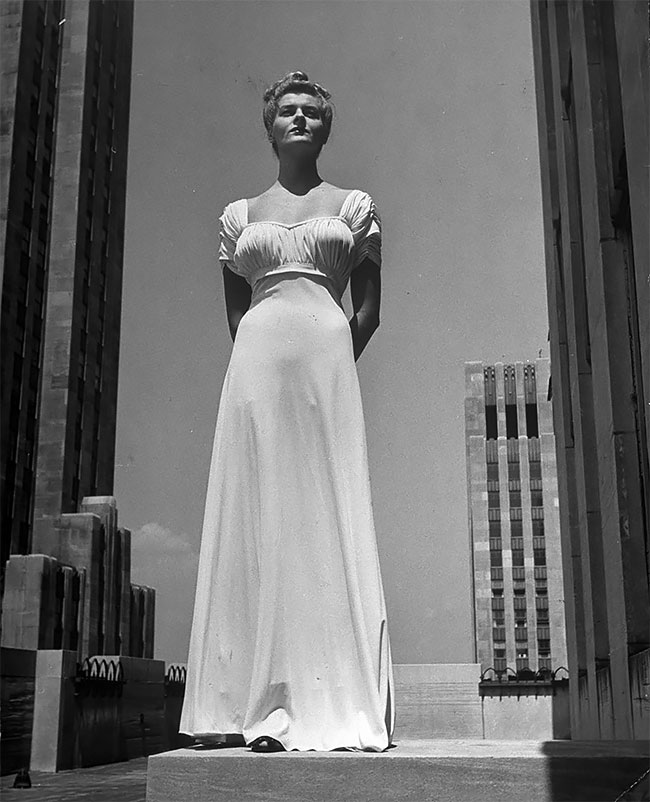 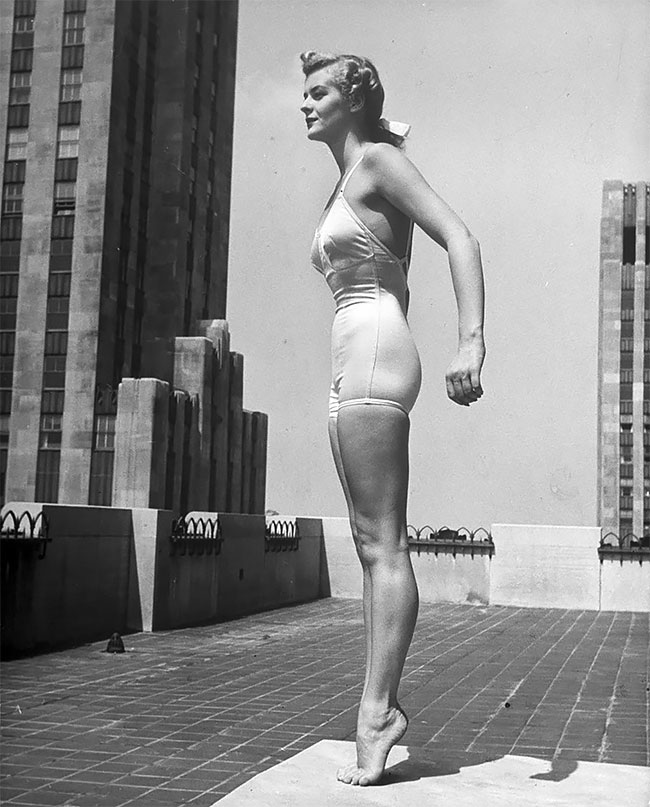 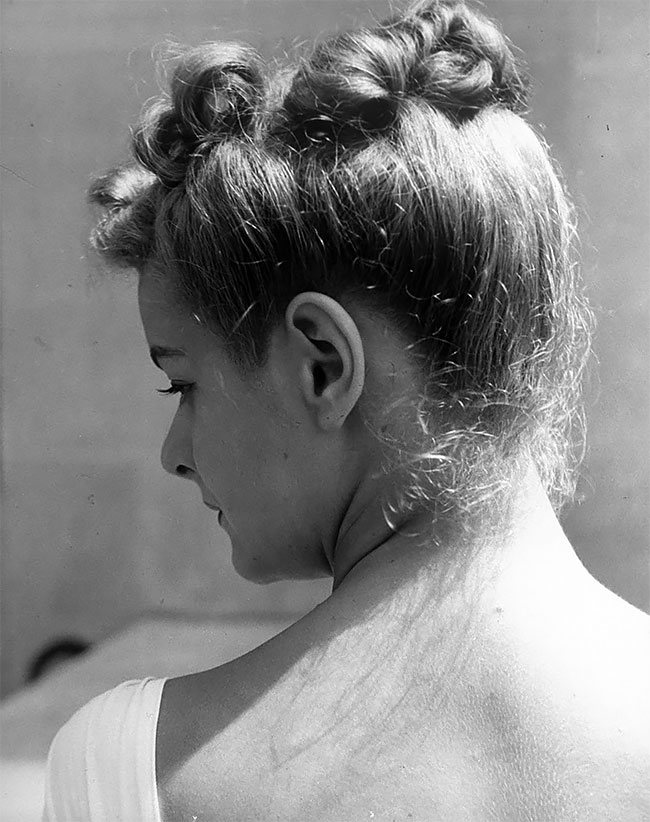 Meet Batgirl, The Daredevil Teen Who 'Flies' On The Tops Of Trains During Moscow's Rush-Hour
This Girl Cosplays Unexpected Things And Here Are Hilarious Instagram Pics
For Men With Balls
37 Brilliant Illustrations That Show Daily Life In A Parallel Universe
Russian Duo Creates Sleek Optical Illusion Portraits That Will Inspire Your Day
Scary Client Feedback Designed As Classic Horror Movie Posters
By The Danger In Her Eyes: The Hauntingly Beautiful Portraits By Elena Sai
Obvious Signs Humanity Is Regressing
Los Angeles Based Artist Drops Words of Wisdom Across the Walls of Melbourne, Australia
Bizarre Paintings Of Mecha Robots And Werewolves Attacking East European Peasants Of The Early 20th Century
Taiwanese Teacher Uses His Awesome Drawings Skills On The Chalkboard To Teach His Students Anatomy
"The Art And Science Of Ernst Haeckel": A Compendium Of Colorfully Rendered 19th-Century Biological Illustrations
Stunning Digital Animalistic Artworks By Dániel Taylor
Artist Rowan Stocks-Moore Reimagines Iconic Disney Posters In His Own Minimalist Style
How To Make iPhone Apps Video Course
Giant Artwork By Calligraphy Artist Pokras Lampas Destroyed In Yekaterinburg, Russia
March Of Robots: The Artist Creates a Series of Illustrations to Get out Of His Comfort Zone
"Modern Lost Dreams": The Connected Children Of Kristian Jones
Psychedelic and Nothing Superfluous: Illustrations by The Artist SilllDa
Getty Museum Challenges People To Recreate Great Works Of Art With Items And People In Their Homes
Random Facts About The World That Might Change Your Perspective On Certain Things
Stunning and Rare Images of The 1935 Adler Diplomat 8 Wheels
The Ultra-Realistic, Three-Dimensional Paintings of CJ Hendry
20 Winners Of The Greatest Photoshop Battles Ever
1930s, figure, ideal, looked, woman, would