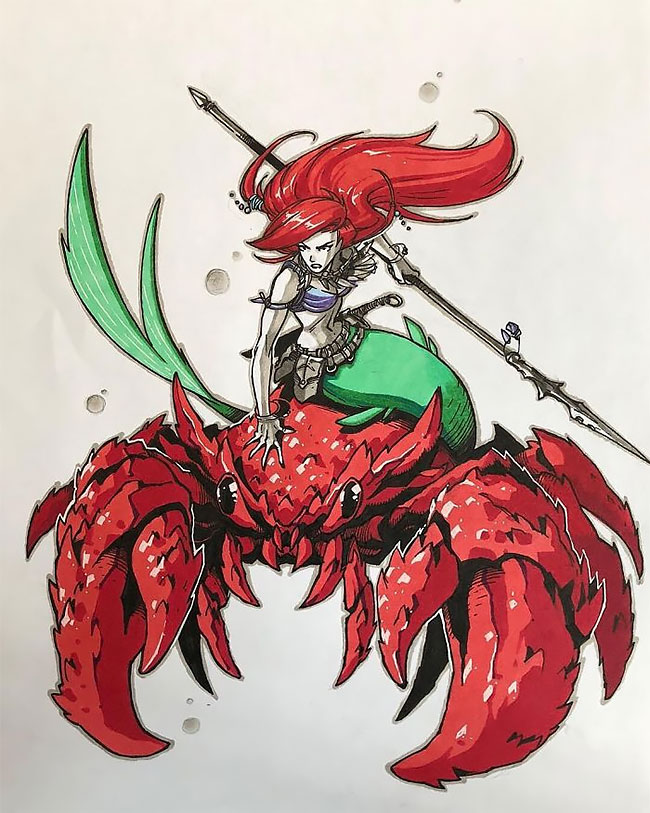 Many people see Disney princesses as the epitome of beauty and grace. But one Russian artist, named Artemii Myasnikov, decided to look at them from a different angle – he gave 11 Disney princesses extreme makeovers and turned them into badass warriors.

The artist told Bored Panda his inspiration came when he was watching “Disenchantment” with his wife one night. They started discussing what they liked and disliked about the main character and both liked that she was no damsel in distress, unlike most Disney princesses. “I immediately wanted to draw a Snow White (because to me she’s the most damsel-in-distress-y princess ever) that would be armed, dangerous, and in charge of her own fate. That’s how the sequence started,” said Artemii.

When not drawing warrior princesses, Artemii works as an art director in a games studio. He regularly uploads his art to Instagram and says his favorite themes are girls, strange creatures, and techno stuff.

“Growing up, I was into Gen 13, all of the Mike Mignola stuff, DC and Marvel comic series (As a child, I was a die-hard fan of X-men series), Mulan, The Transformers, Exosquad, The Animatrics…” says the artist.

Check out the badass princesses in the gallery below!

Mulan And Mushu Looking Ready To Stir-Fry You 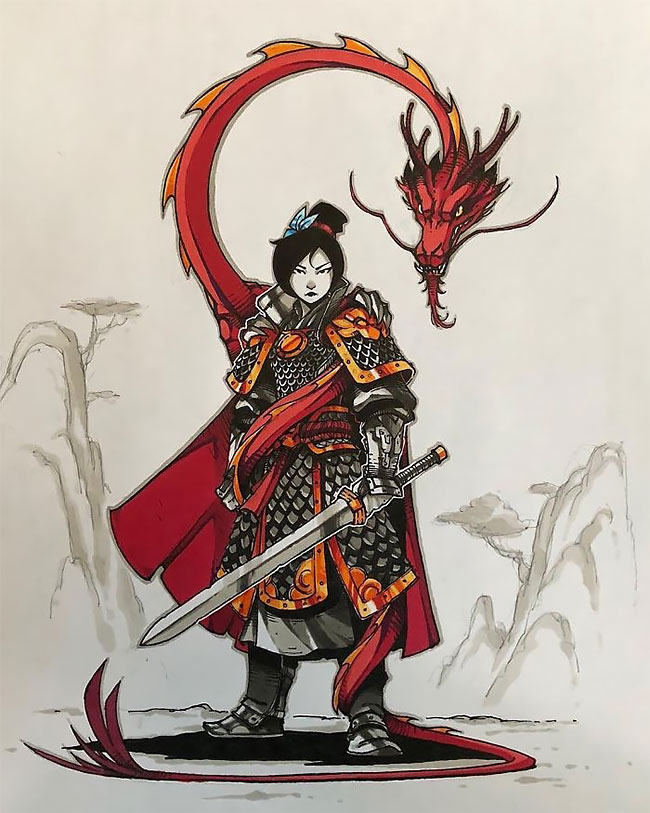 Pocahontas And A Rabid Meeko 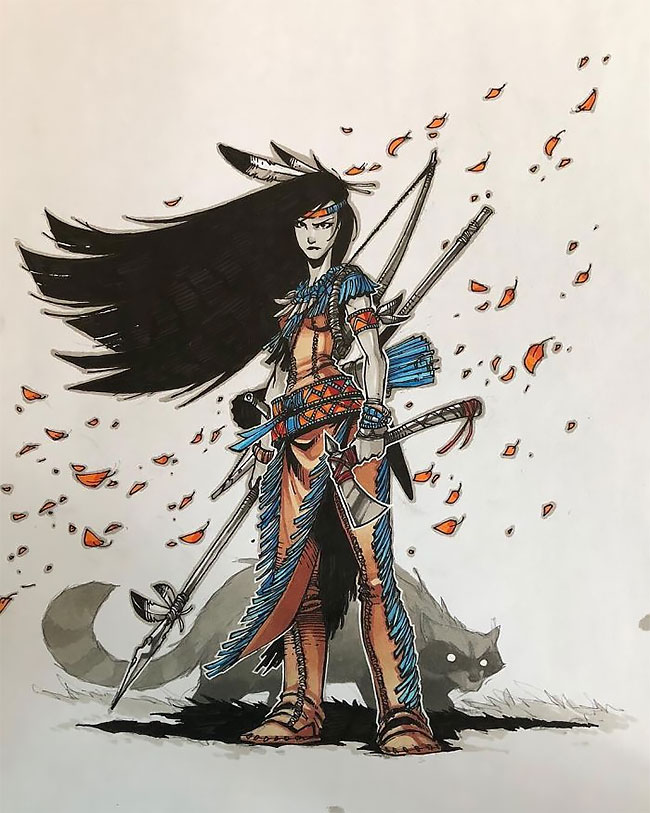 Belle And An Absolute Beast 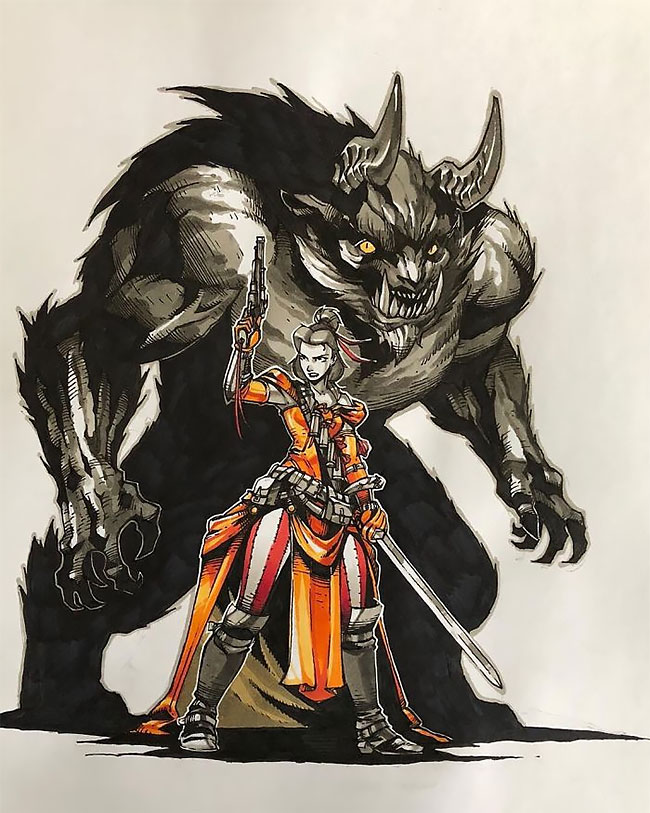 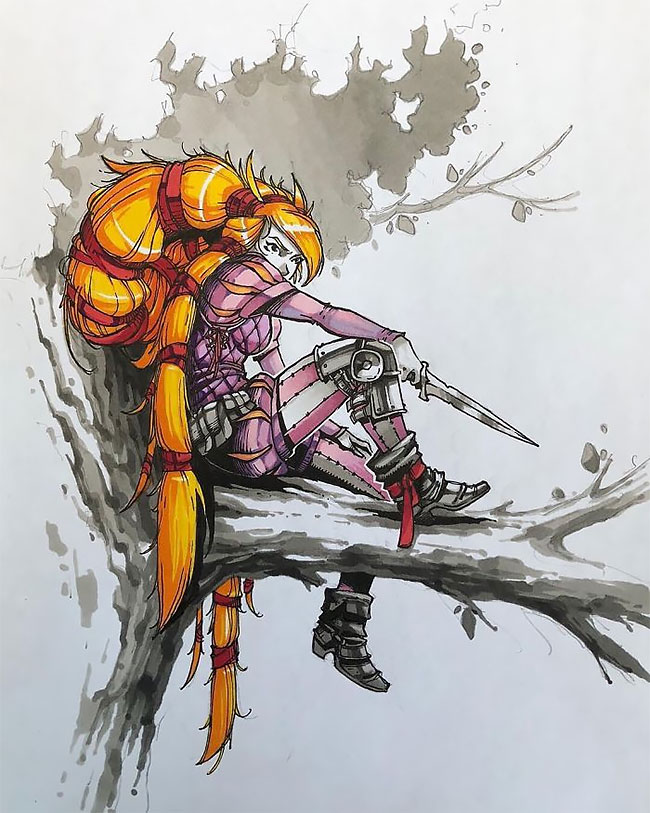 Jasmine Flying In On Carpet 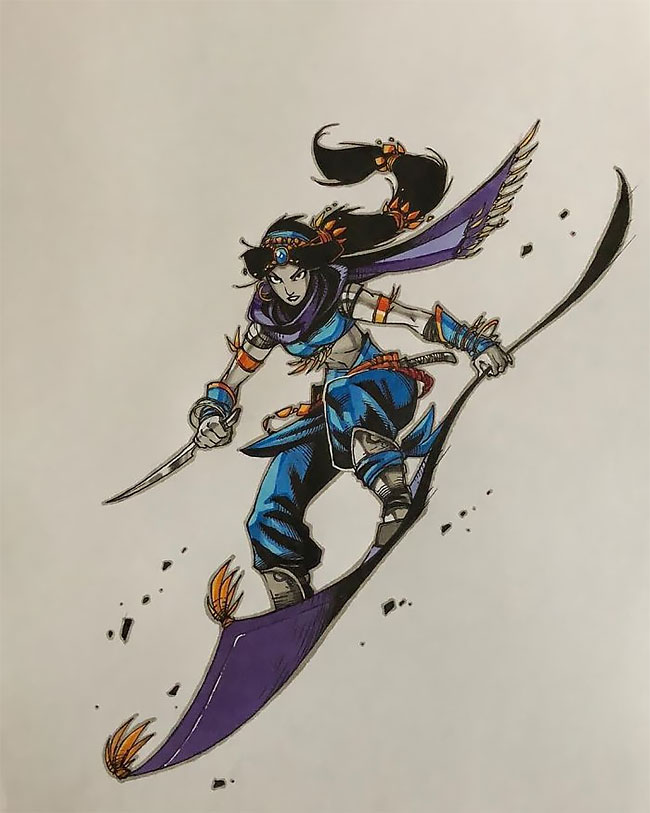 The Last But Definitely Not The Least Goes Merida 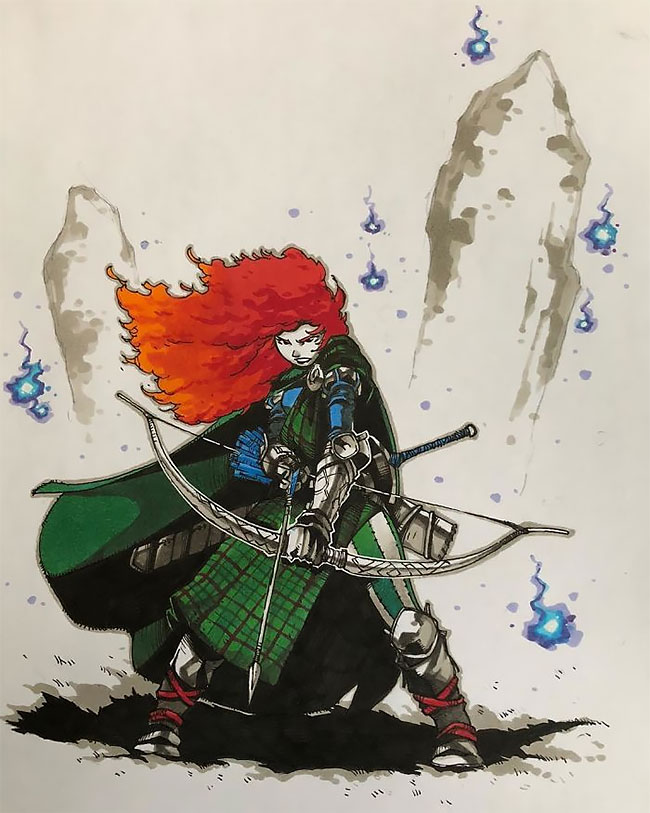 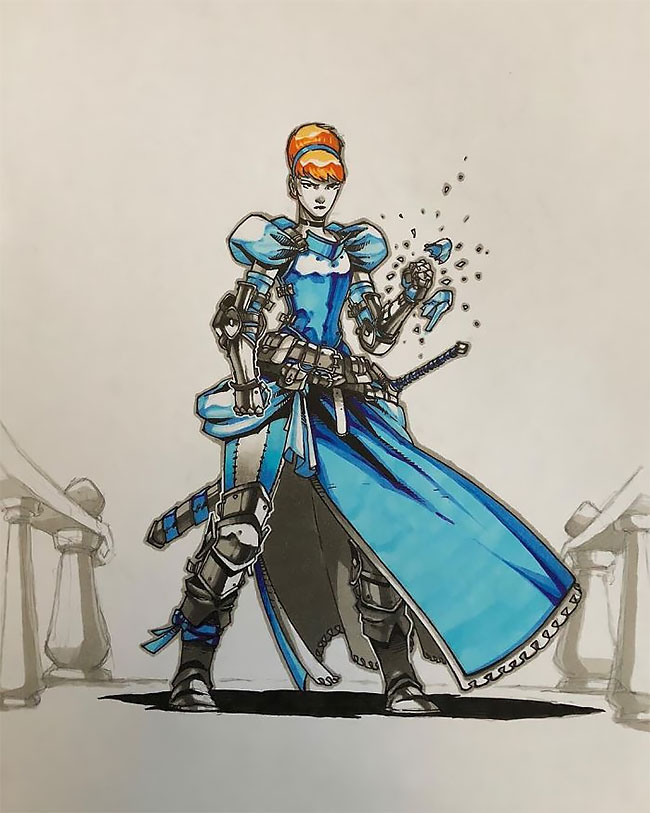 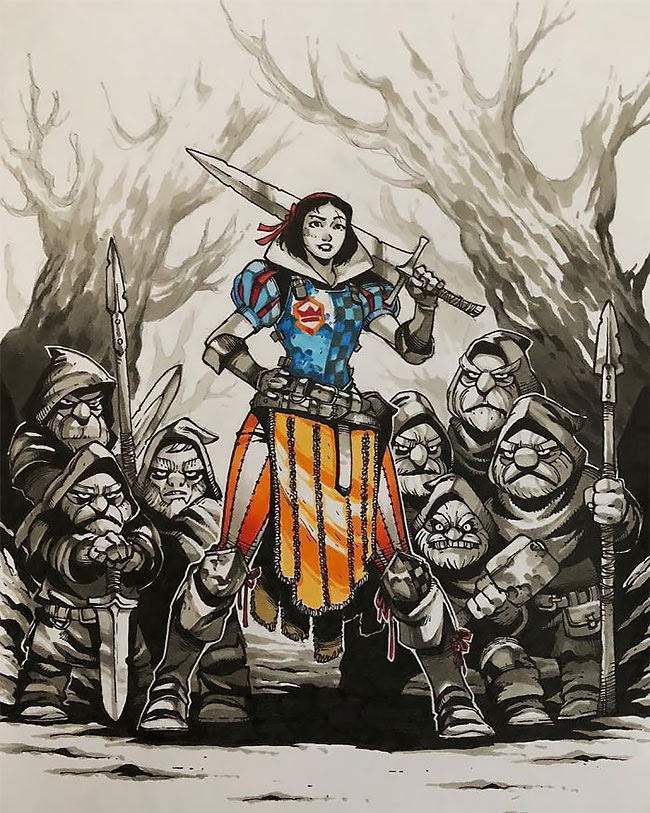 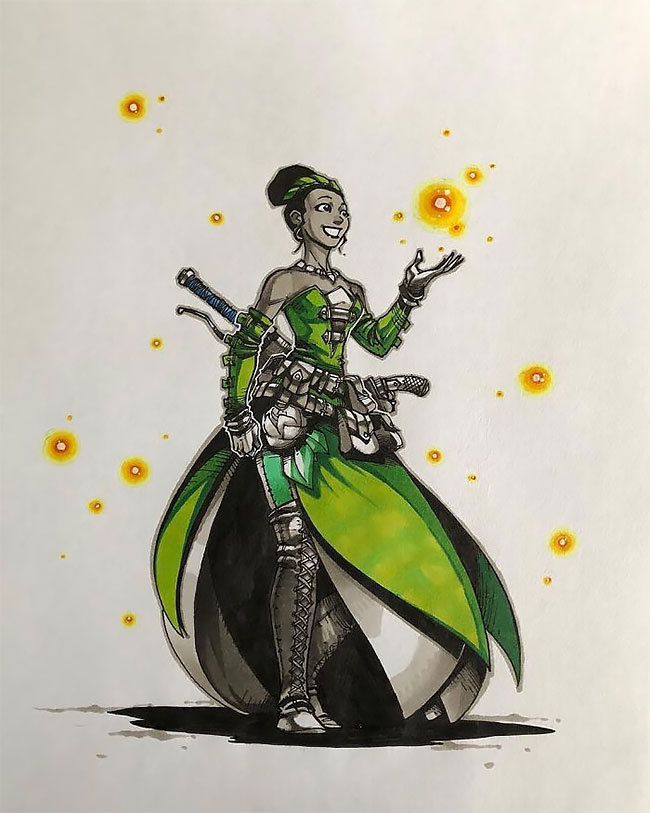 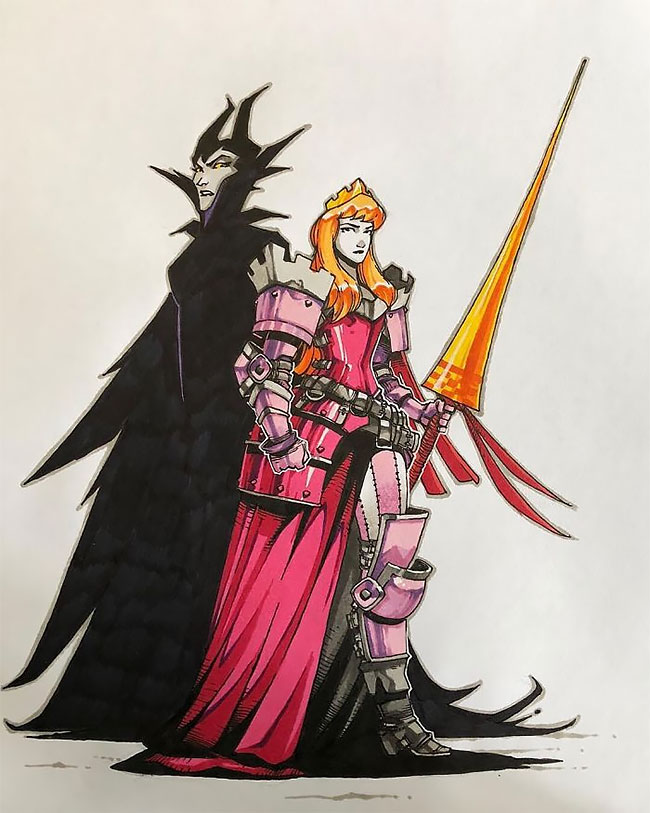 Vegetal By Nature: When An Artist Is Styling Statues With Flowers
A Creative Agency from Moldova Found a Unique and Fun Way to Attract New Hires to their Team
Snails Start Attacking Man’s Garden, Instead of Killing Them, He Puts Up Scary Signs
Funny Simple Cartoons By Henry James Garrett
"Slow Down and Draw": The Colorful Graphic Design Works of Ailish Beadle
"Stargazing": The Superb Dreamy and Psychedelic Digital Collages by Voja
"Dead By Daylight": Eerie Futuristic Digital Art By Cristian Chierici
Multi-Dimensional Illustrations Weave Together Mysterious Narratives By Victo Ngai
Beauty is in the Details
"Don't Trust the Truth": The Superb Graphic Design Works of Sebastian Onufszak
Leroy Merlin's Preparation of a Banknotes
Forgotten Classical Art Taken From Museums To The Streets
Girl Draws Self-Portraits Before And During LSD High
Anatomy of a Ruin: The Superb Dark and Creepy Art Works of Sam Wolfe Connelly
Incredibly Colorized Pictures Show The Life Of Russian People In The Past
Beauty and Danger: Navigavi Anime Art
Hilarious Russian Village Ads For Hollywood Movies
This Artist Challenges Logic With His Surreal Photo Manipulations
Me & My Other Me
People Ask This Artist To Edit Their Pics And He Absolutely Nails It
Vintage Postcards of Mid-Century Romantic Couples
Coca-Cola Zero to Help Discover a Secret Agent in You
"The Last Of Us" Concept Art By John Sweeney
Russian Artist Creates Dolls That Look Disturbingly Real
badass, disney, princesses, russian, turned, warrior

Artist Imagines Famous Cartoon Characters With Human Bodies And The Result Is Bizarre
Beautiful Winning Photos From The LensCulture 2018 Street Photography Awards
"Aspire to Inspire": A Collection of Sun Spectrum Waveforms by Alyssa Morang-Pavlock
Cyberpunk, Biomech, and A Pinch of Death: Illustrations by Ching Yeh
People Are Photoshopping Trump’s Face On The Queen To Annoy Him
Street Art that's Not so Easy to Get Rid of
"The Other Side of the Dark": Digital Dreams by Smeccea
Artist Puts Together ‘Super Families’ From Our Favorite Characters
Li Wentao’s Cryptic Paintings of Contemplative Women
Russian Artist Illustrates What Would Happen If Famous Characters Got Old, And Thor Is Too Cute
Source of inspiration since 2007. Proudly hosted by WebHostingBuzz.
Privacy Policy · Terms of Service · Content Removal Policy 🇺🇦 ❤️