If you don’t live in an area populated by coyotes, you might be a tad confused when you first see a dog sporting an ensemble like this one: 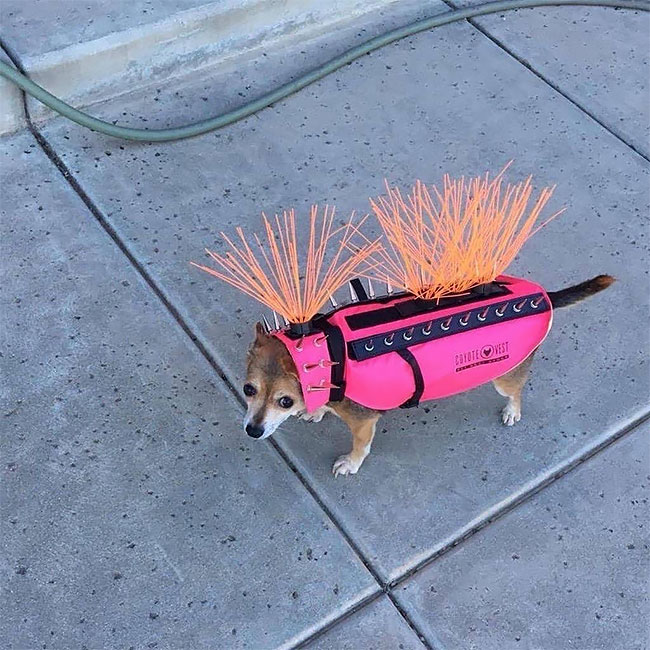 What at first glance appears to be a very odd Halloween costume is actually a Coyote Vest—a special coat of armor designed to protect your dog from this wild predator. The vest is made from Kevlar, the same puncture-resistant material used by law enforcement, and fitted with spikes on the neck and sides to prevent bites. But its most unique feature, perhaps, is the “coyote whiskers”—bright nylon bristles attached to the back which make the dog appear larger and more threatening to animals looking for their next meal.

As funny as coyote vests look, they have a sad backstory, as they were invented in 2014 by San Diego resident Paul Mott after his dog was attacked and dragged off by a coyote, never to be seen again. Based on the testimonials, it seems like these vests are pretty effective at warding off potential attackers. And if you can protect your best friend and make them look metal at the same time, it’s just an added bonus.

There’s a coyote outside. You know what that means: coyote vest time! pic.twitter.com/Pj164giawL

All hail the fantastic Coyote Vest! Gryphon wears his every time he's outside in our yard. pic.twitter.com/SIyB9cVVZL

I'm not even making fun. It's very punk. pic.twitter.com/47A5xDkshw

Lola has seen hawks and coyotes on her daily walks. Add our HawkShield to your CoyoteVest for protection against birds of prey. #coyotevest pic.twitter.com/oB7FDmaEov

Charlie the Bischon is ready for the outdoors in his CoyoteVest! Keep your dogs safe from predators while celebrating #LaborDayWeekend pic.twitter.com/kkJ7OkxKDD

That's basically how cyclists in Australia protect themselves from swooping magpies pic.twitter.com/BEnzU9wayi

Happy #FriYAY! ??@lalalalalolathejrt just received her new #CoyoteVest in the mail this morning. What are you excited about today? ・・・ “My new @coyotevestco vest just arrived and I'm trying it on at work this morning. Dad and I saw a pack of 5 coyotes in our backyard just a few weeks ago. My vest is comfortable (also very stylish), and dad's happy I'm protected!” – @lalalalalolathejrt

Foo-Chan - Disappointed Cat
Ride Like An Animal While Wearing Ultra-Realistic Animal Ski Mask
2020 Social Justice Kittens Calendar Is Here!
Heartwarming Photographs Capture The Bond Between Homeless People & Their Pets
Couple's Dog Is the Cameraman On Their Enchanting Wedding Day
Photographer Catches Squirrel Stopping To Smell A Flower
The Surprising Beauty Of Microscopic Insects, Isopods And Crustaceans Illuminated With Polarized Light
Photographer Julia Christe Snaps Of 'Flying' Dogs In Mid-Air
Photographer Continues to Capture Hiding Cats in Venice
Unusual Animals: Hydrocynus Goliath
Soth Korean Studio Creates A Miniature Series Of Luxury Villas For Your Hamster
The Seventh Annual Running of the Wieners – Oktoberfest in Cincinnati
Photographer Chris Cline Can’t Get Enough Of His Dog So He Supersizes Him
The Last Of The Kings: Very Sad Photos Of The Hard Life Of Congolese Gorillas
Cosplay Cats Are Taking Over The Internet
German Circus Uses Holograms Instead Of Live Animals For A Cruelty-Free Magical Experience
Photographer Takes Photos Of Cats High On Catnip, And The Results Are Brilliant
The Black Intruder
Meet The Cutest Fish Vendor In Vietnam Who Is Taking The Internet By Storm With His Adorable Pics
Entries of the Scottish Seabird Centre's Nature Photography Awards
A Bear's First Photo Shoot: Adorable Cub Ayra Strikes Comical Poses As She Balances On Two Legs
People Are Building Dog Libraries, And It’s Adorable
Colombian Daredevil Dog Skydives For Military Training
Ugly Medieval Paintings Of Cats
coyote, dogs, protect, vest