Adorable Cat Loves Standing on Two Legs Like a Human 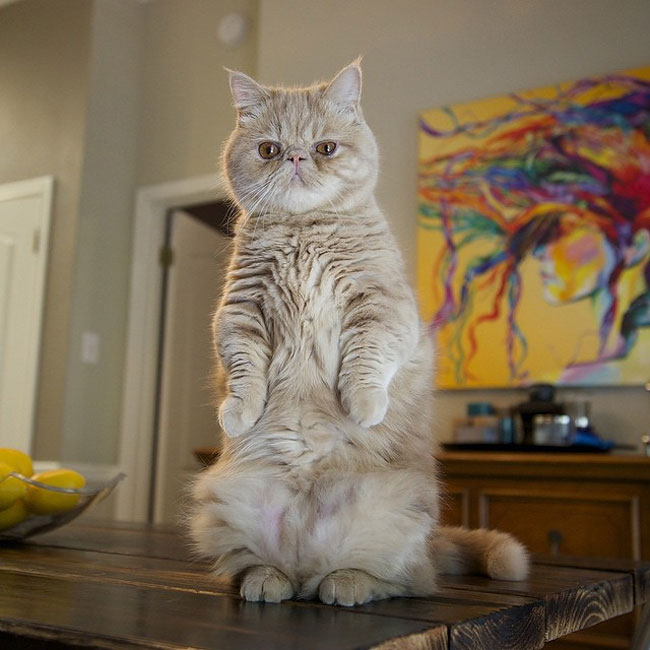 Meet George (aka George2Legs), an adorable cat who seems to think that two legs are better than four. He’s often seen standing like a human, trying to make himself taller by being on his hind quarters. Besides looking ridiculously cute as he stands like this, it actually gives him a better view of the nearby action, be it just over a counter or outside a window. 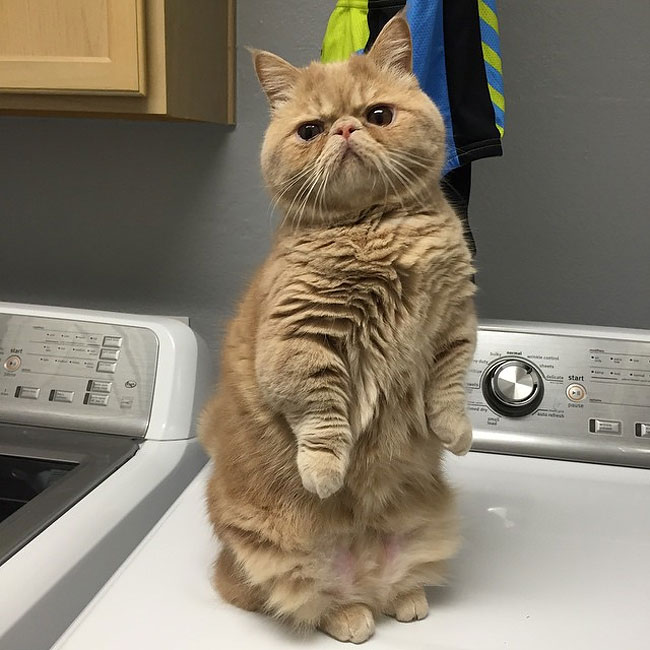 Like with most cats, the entire house is George’s kingdom. As the ruler of his domain, he stands wherever he pleases, adding even more height to his upright position by climbing on chairs, tables, and home appliances. With his large, puppy-dog-like eyes, George makes standing on his hind legs look less weird and more adorable. 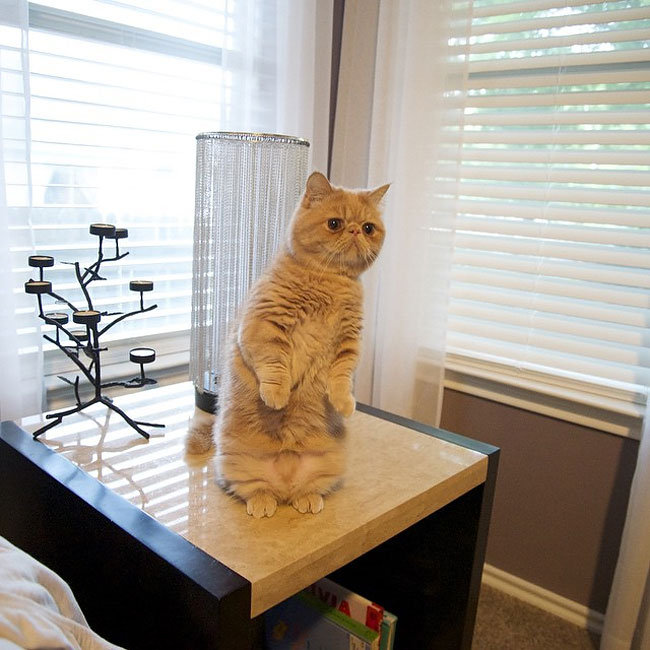 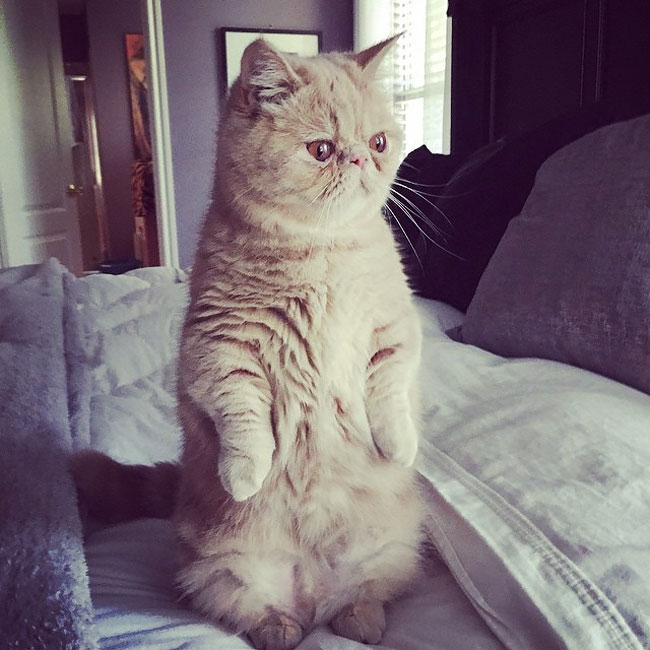 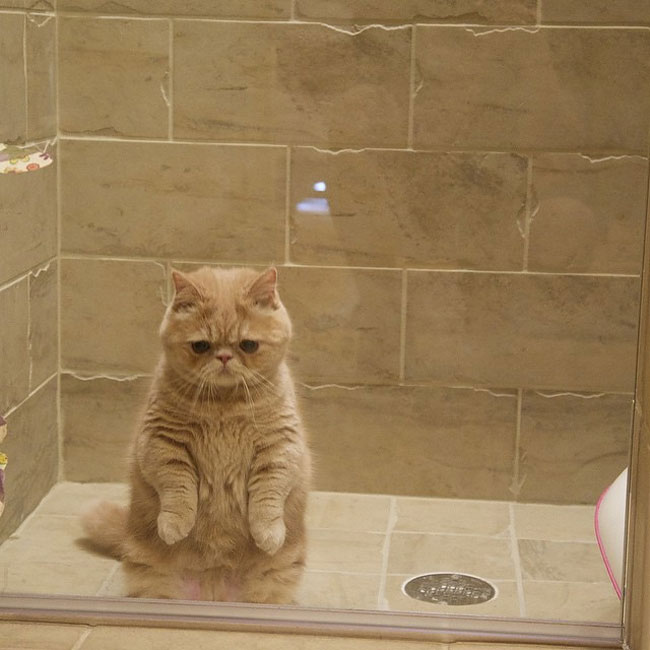 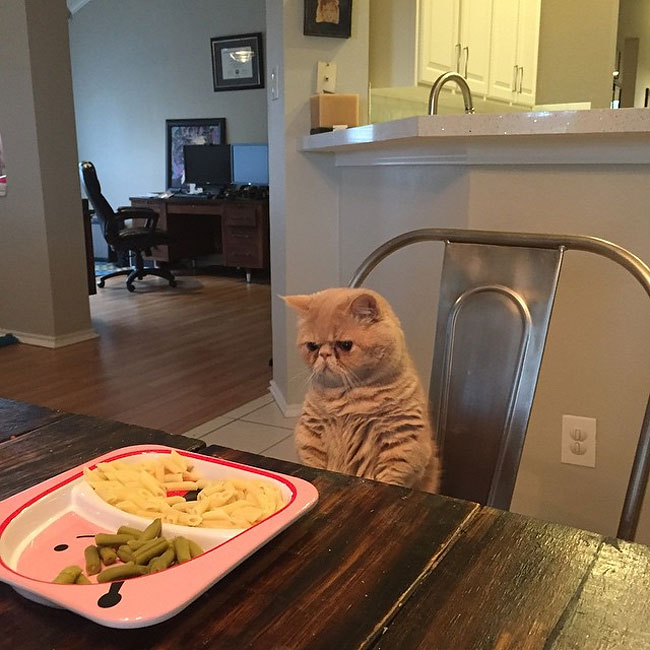 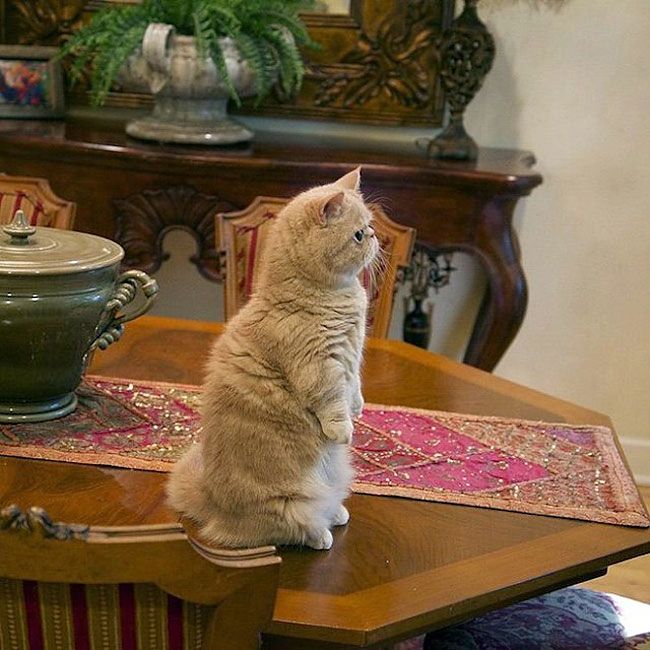 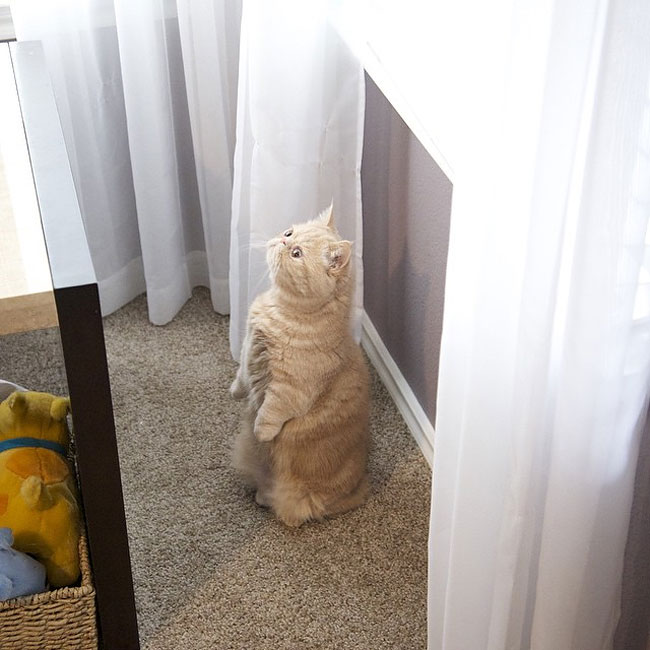 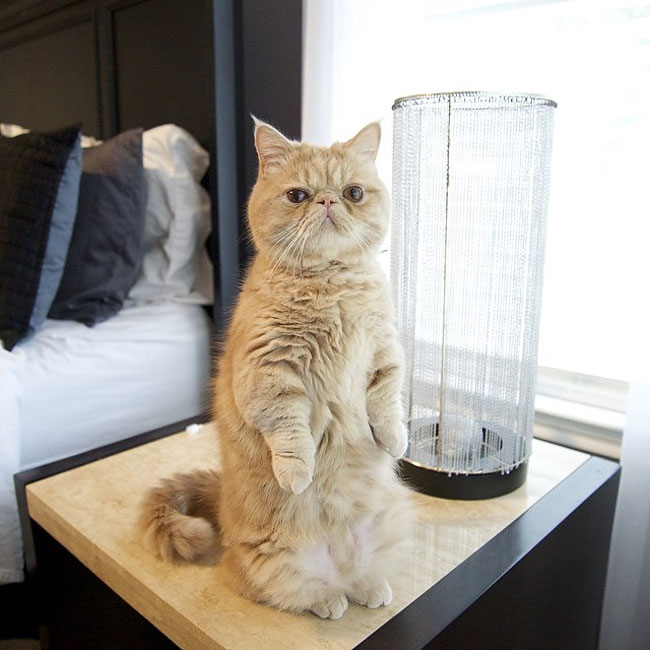 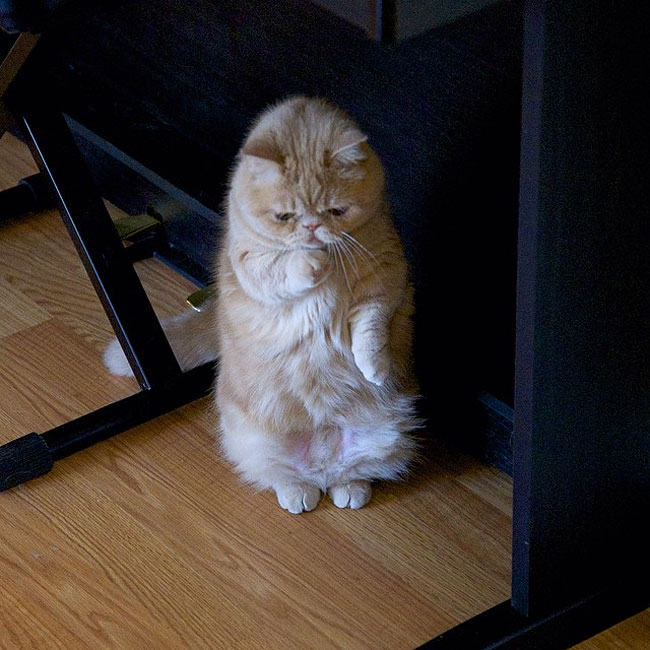 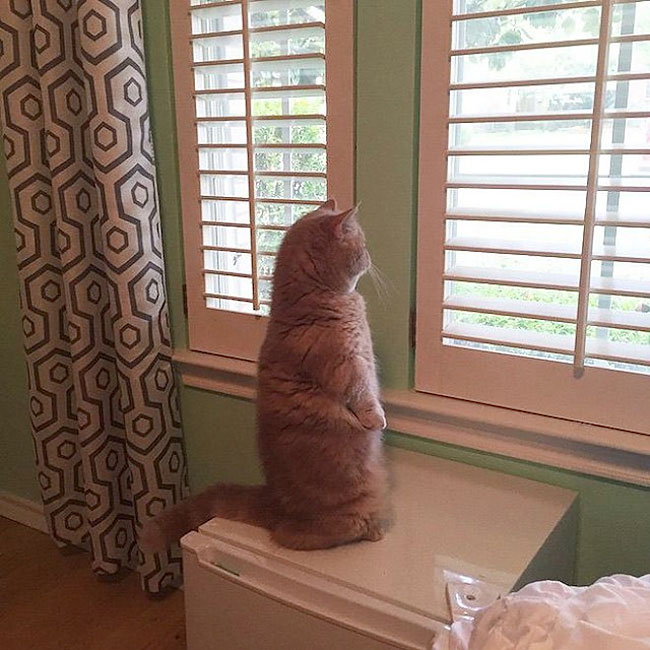 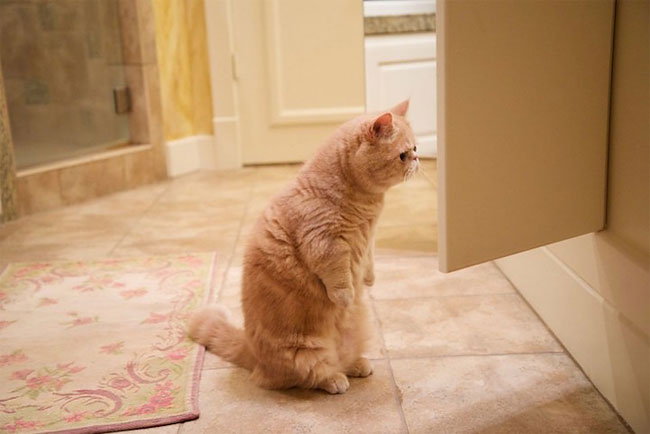 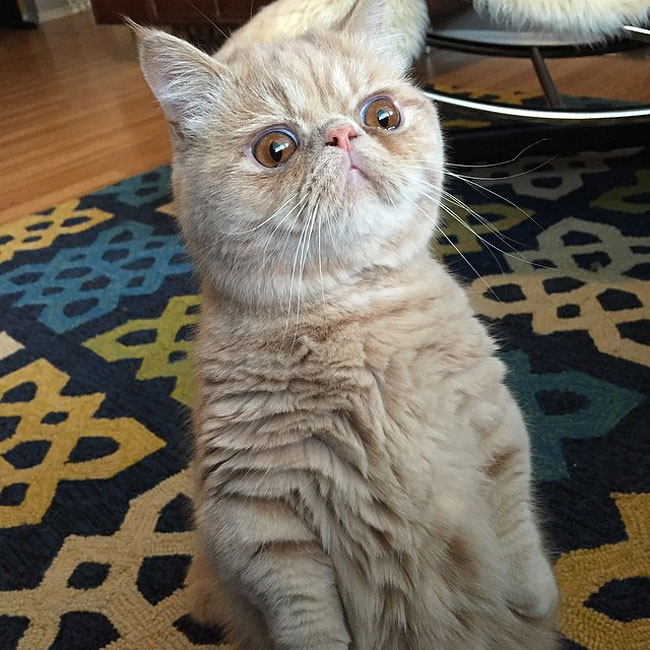 Artist Imagines The Secret Life Of Wild Animals When No One‘s Watching
Japanese Photographer Captures Very Sad Stray Cats And Their Games
Scary but Touching Photos of Ukrainians with Their Pets Hiding from Russian Bombs in The Kyev Subway
Finally, "Squid Game" Costumes For Your Pets
Barking Mad Dog Groomer Transforms Pampered Pets Using Crazy Dye Designs
This Fox Thinks He’s A Dog
Florida Wildfire Biologists Release Panther into the Wild
Siberian Tiger Cubs at Zoo
Rescued Calf Gets New High-tech Prosthetics
Advertisements of Sea Shepherd Organization
10 Absolute Benefits Of Having A Cat
Cute Illustrations Of Animals Saying Very Depressing Things
Warning: Seeing These Adorable Cats Cuddling With Each Other Might Make You Say "Awww" Aloud
Bored Sitting At Home? Try To Find A Cat In Each Picture!
A Cheetah Encounter in the Serengeti
This Artist Makes Funny And Creepy Cat Hybrids Bred In Photoshop. Have Things Gone Too Far?
Adorable 'Little Monks' In Chongqing Go Viral Online
A Lot of Penguins
The Secret Life Of Hamsters And Hedgehogs: Humorous Photos Of The House Pets By Elena Eremina
Designed By Nature: Russian Fisherman Posts Terrifying Creatures Of The Deep Sea Again, And People Want Him To Stop
This Adorable Series Documents A Toddler And Her Pup Growing Up
This Is What Happens When You Face Swap A Cat With Spirited Away’s No-Face
Cat Beds Don’t Have To Look Like A Cat Bed
Photographer Captured The Incredible Scene Of The Tiny Ant Hauling A Huge Bee
adorable, human, loves, standing

What Australia Looks Like In The Winter
These Portraits Reveal The Incredibly Humanlike Expressions Of A Variety Of Apes
Spaniel Plays Mum for Lambs
This Adorable Series Documents A Toddler And Her Pup Growing Up
Creative Father Puts His 3 Adorable Daughters Into Funny, Eclectic Photo Manipulations
Aren't You a Little Short to be a Stormtrooper
Animal Lovers Converge on Pet Fair
Human-Like Wild Animals
No Necks! There’s an Instagram Account That Posts Animals Without Necks.
Heartwarming Photographs Capture The Bond Between Homeless People & Their Pets
Source of inspiration since 2007. Proudly hosted by WebHostingBuzz.
Privacy Policy · Terms of Service · Content Removal Policy 🇺🇦 ❤️