Closer Than We Think: 40 Visions Of The Future World According To Arthur Radebaugh 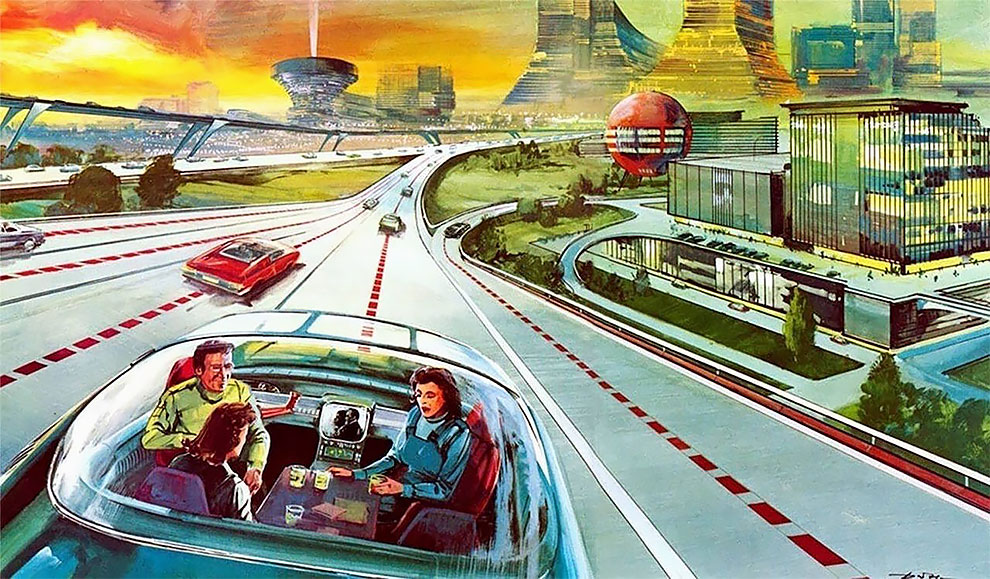 From 1958 to 1962, illustrator and futurist Arthur Radebaugh thrilled newspaper readers with his weekly syndicated visions of the future, in a Sunday strip enticingly called “Closer Than We Think”.

Radebaugh was a commercial illustrator in Detroit when he began experimenting with imagery—fantastical skyscrapers and futuristic, streamlined cars—that he later described as “halfway between science fiction and designs for modern living.” Radebaugh’s career took a downward turn in the mid-1950s, as photography began to usurp illustrations in the advertising world. But he found a new outlet for his visions when he began illustrating a syndicated Sunday comic strip, “Closer Than We Think,” which debuted on January 12, 1958—just months after the Soviet Union launched Sputnik—with a portrayal of a “Satellite Space Station.”

Week after week, he enthralled readers with depictions of daily life enhanced by futuristic technology: mailmen making their daily rounds via jet packs, schoolrooms with push-button desks, tireless robots working in warehouses. “Closer Than We Think” ran for five years in newspapers across the United States and Canada, reaching about 19 million readers at its peak.

When Radebaugh died in a veterans hospital in 1974, his work had been largely forgotten—eclipsed by the techno-utopian spectacles of “The Jetsons” and Walt Disney’s Tomorrowland. But more than two decades later, Todd Kimmell, the director of the Lost Highways Archives and Research Library, acquired photos of Radebaugh’s portfolio that had been stashed in the collection of a retiring photographer and began reviving interest in his work. 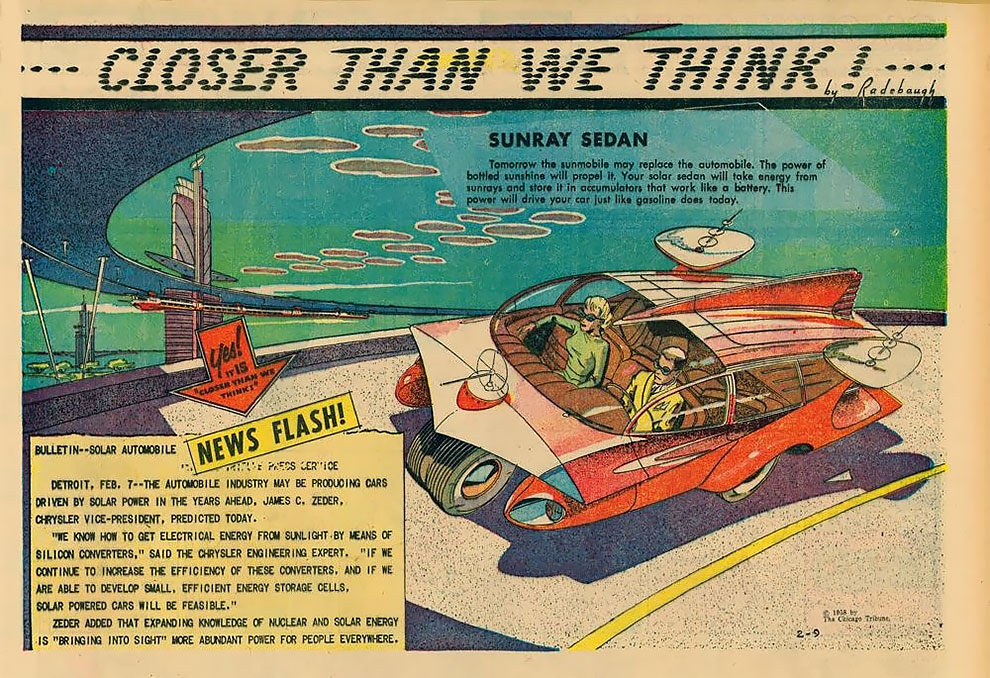 Cars have made tremendous strides in fuel efficiency over the past half century. But we’re still waiting for this sunray sedan — a solar-powered car that was promised from no less an authority than a vice president at Chrysler. 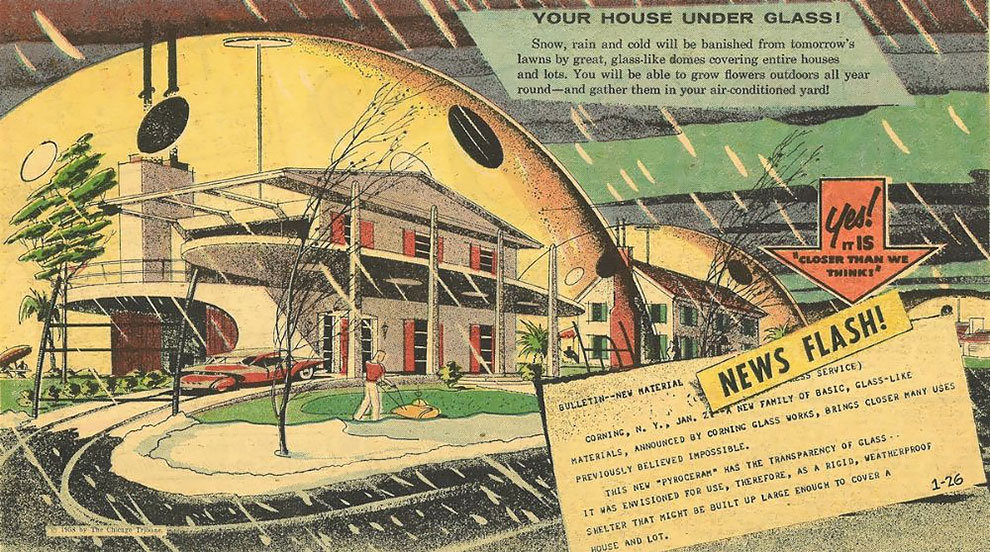 People of the 1950s and ’60s seemed to be obsessed with protecting their homes from the weather. Even if it meant literally living in a bubble, like this suburban utopia, which was protected from the elements by a giant, glass dome.

How does one begin to eat a cob of corn as big as a school bus? That question wasn’t answered in this 1962 edition of the comic strip. But just think of the huge popcorn it would produce! 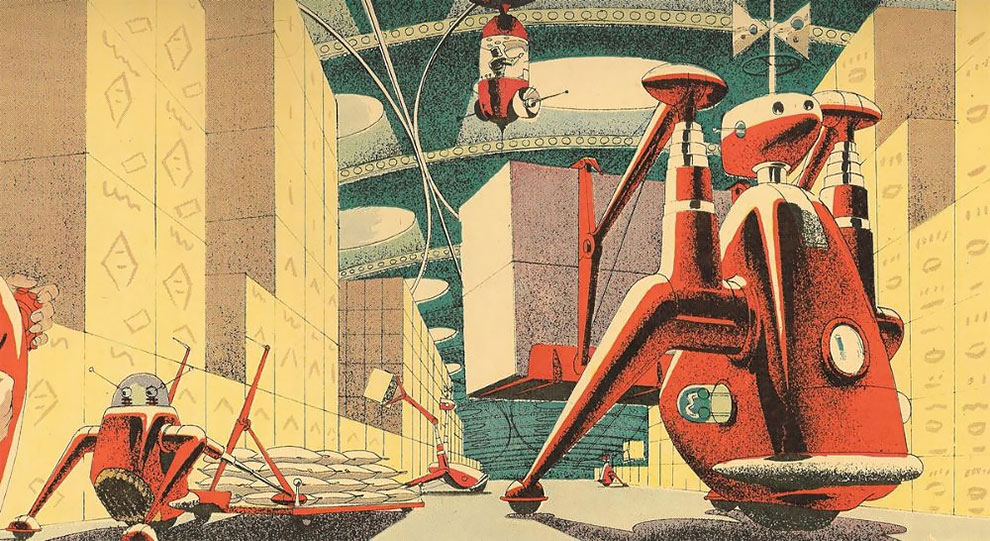 If you’ve seen the inside of an Amazon warehouse recently, you know that the futuristic robot warehouse is kind of here. But sadly, they’re not quite as cool looking as these robo-helpers from Closer Than We Think. 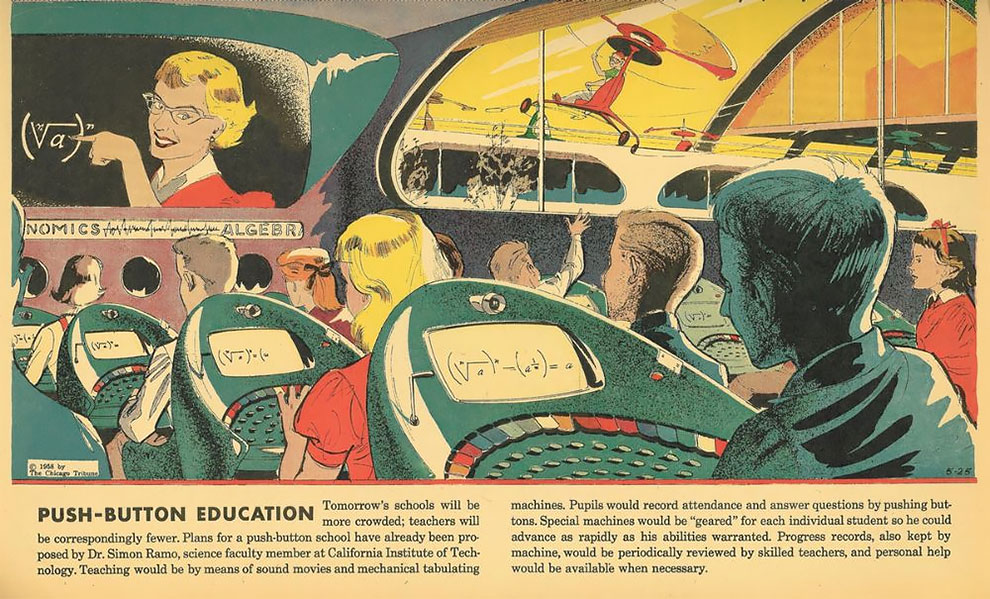 As the Baby Boomers started to go to school in the 1950s America’s educators were faced with the crisis of overcrowding. One solution they envisioned for the computer-filled future? More automation, including push-button desks to keep betters tabs on kids.

These walking machines were meant to be a versatile solution for getting people out of cities during a potential crisis. This panel didn’t describe what had happened, but it doesn’t look good. 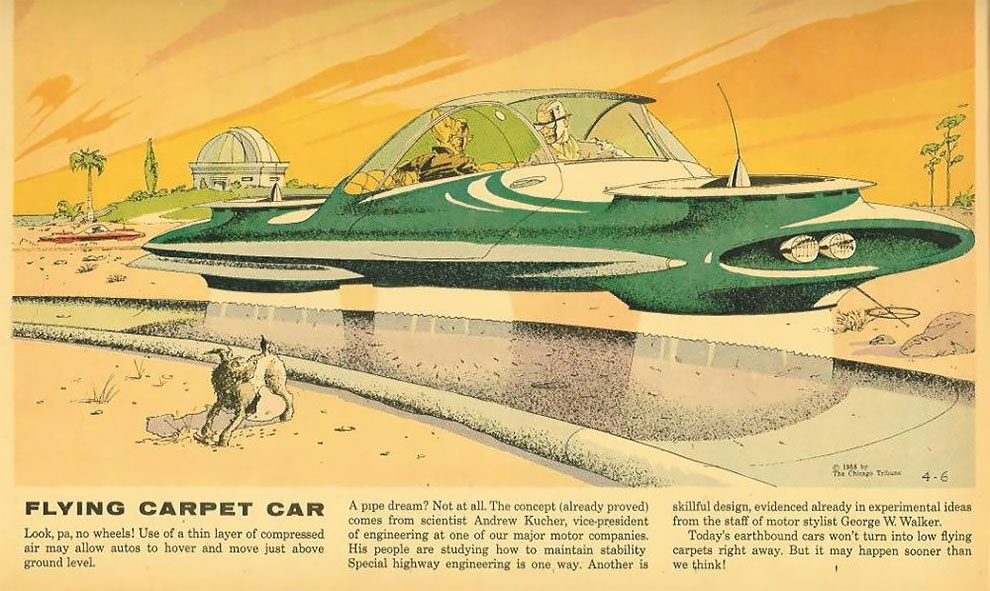 The future was supposed to be filled with cars and fly and hover. But the big question that this “flying carpet car” poses seems to be where the brakes would be. Seriously, how do you stop a hovering car like that? 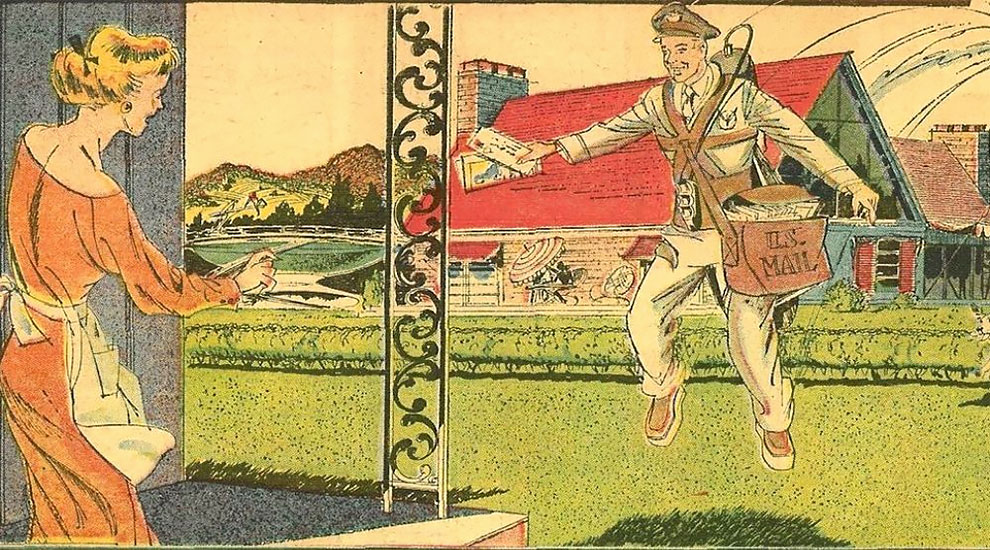 The postal delivery worker of the future would get his very own jetpack! It’s just too bad that he didn’t see that whole electronic mail thing coming.

The idea for a highway to Russia isn’t as crazy as it sounds. In fact, people were imagining it long before this 1959 edition of Closer Than We Think went to print.

Who needs to preserve life on Earth when we can just pack up and move to the next habitable planet? The August 16, 1959 edition of Closer Than We Think imagined that Space Mayflowers would take adventurous travelers to distant planets once we’d worn out Mother Earth. 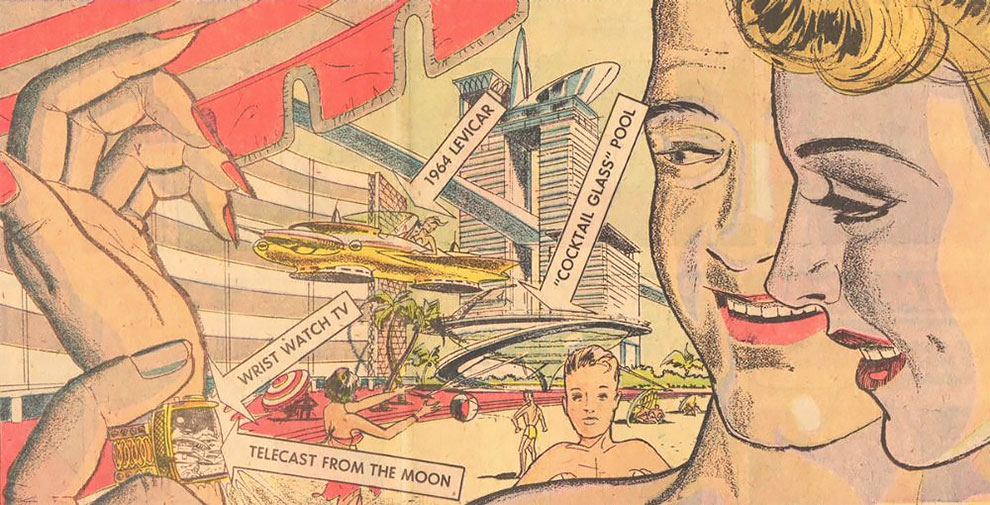 Everybody is wondering if smartwatches and other wearables are the Next Big Thing™. That remains to be seen in the wake of Google Glass, but we can’t say that we haven’t been waiting for generations. 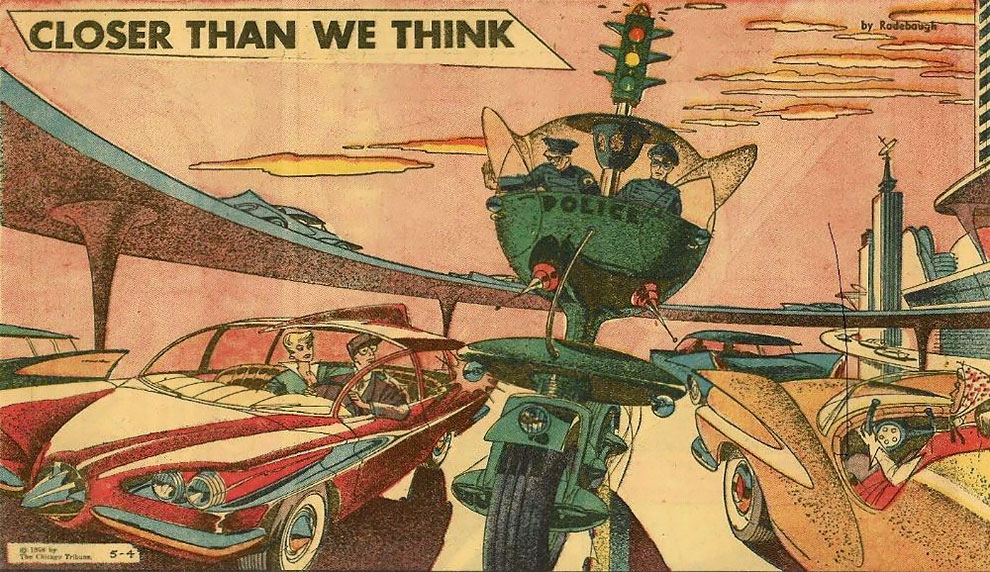 The police car of tomorrow would allow cops a height advantage so peculiar that one wonders if it’s an advantage at all. Were they supposed to be able to climb out of that thing to give people tickets?

The videophone would be incredibly ubiquitous in the future of Closer Than We Think. So much so that applying for a job would be just a videophone call away, as we can see in this illustration showing a man in Philadelphia taking an interview with a potential employer in Buenos Aires.

The driverless car of tomorrow would let people relax and play cards. Can you imagine this scenario in the year 2018? It’s hard to believe that anyone would be making eye contact since their faces would be no doubt buried in their phones. 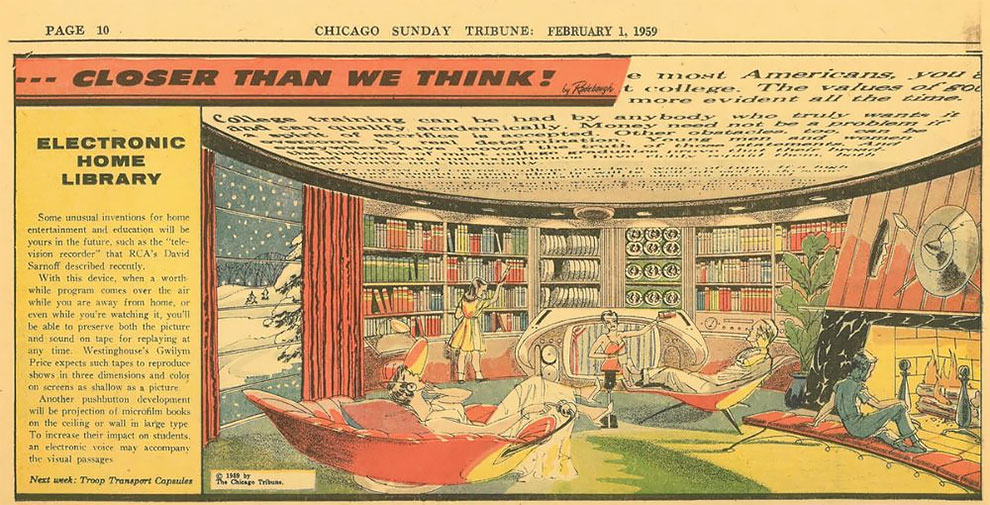 The media library of the future was going to be rich and varied. But there’s something a bit off about this prediction from 1959. Maybe it’s the film canisters lining the shelves. Or maybe it’s the 3D-TV sans glasses that Pop is watching. Or maybe it’s the fact that Mother is reading a book on the ceiling in what looks like the most uncomfortable way to read a book of all time. 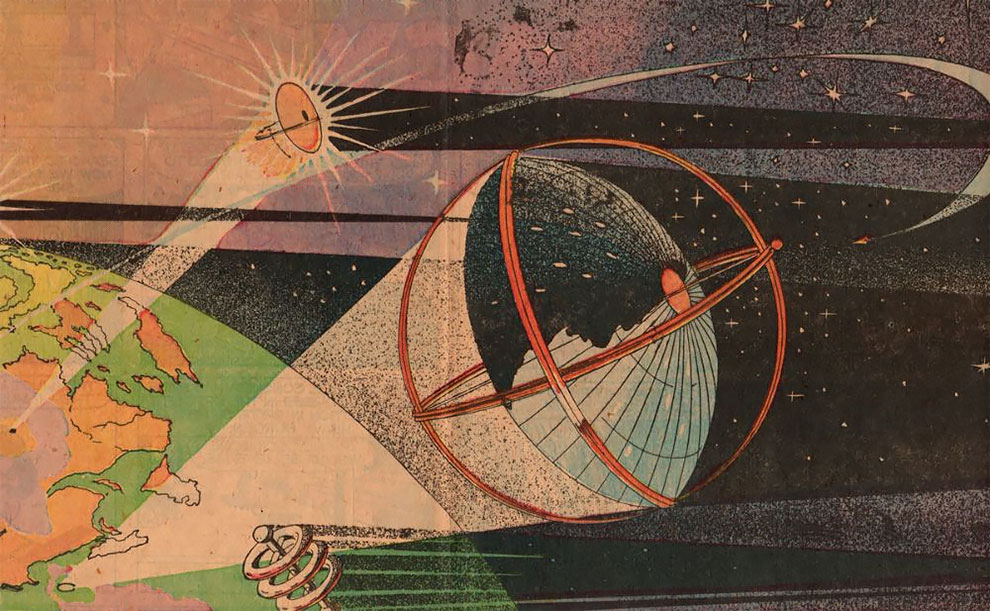 A facsimile Christmas card bounced off the moon to be delivered from Boston to Honolulu? How futuristic! Except for that whole paper thing. 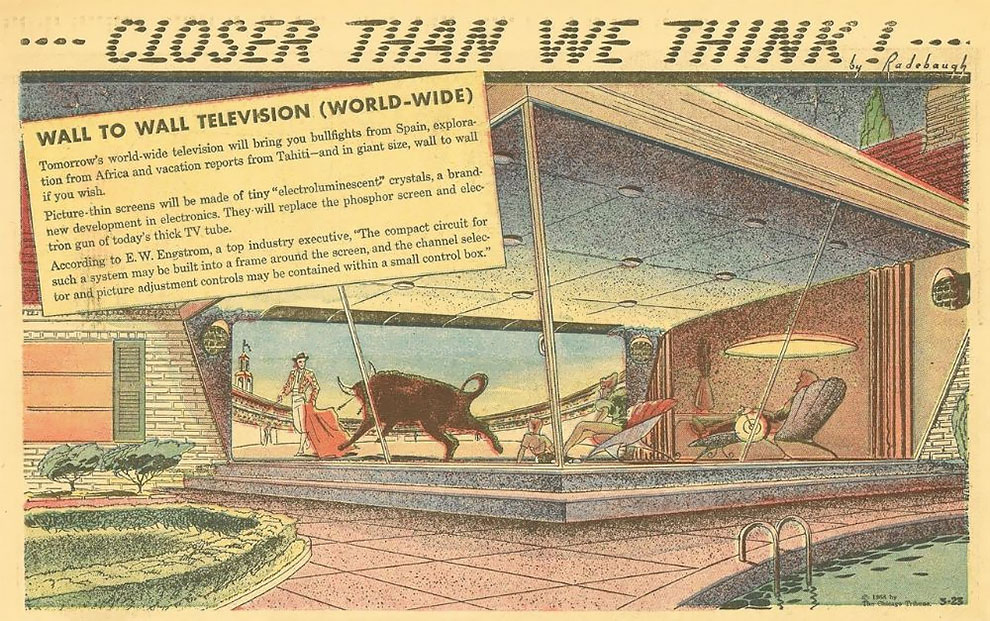 The internet has indeed opened up the world of media so that more people can enjoy TV shows from countries they don’t live in. But the complex web of international licensing agreements makes legally watching some shows from overseas an overly complex chore. 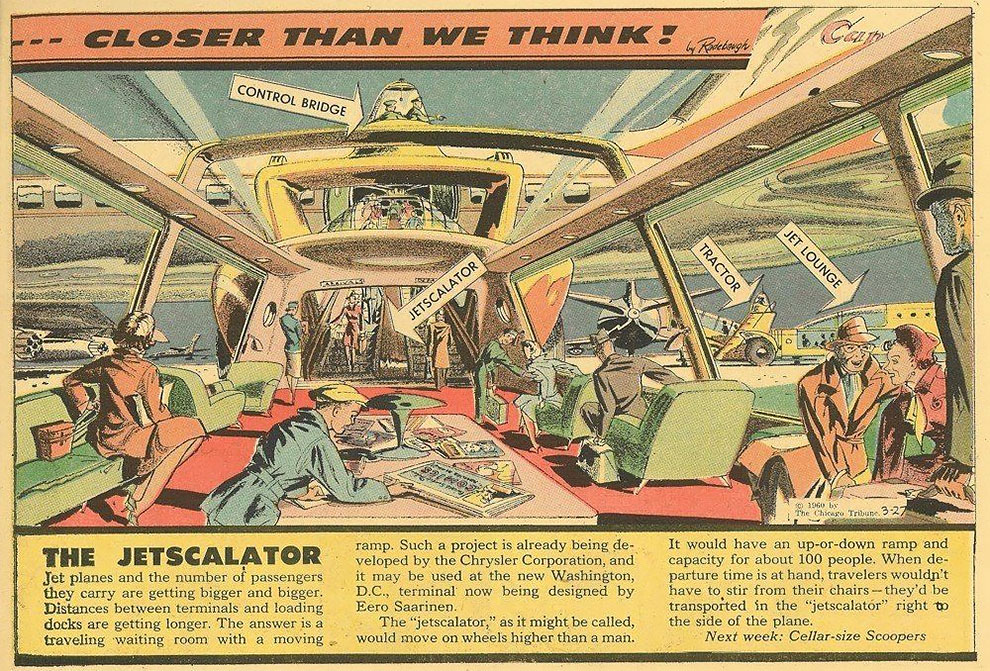 The concepts for moving people from one place to another are decadently plush in Closer Than We Think. Even getting between airport terminals would be a pleasure. But we’re still waiting on this particular version of tomorrow’s airports to arrive. 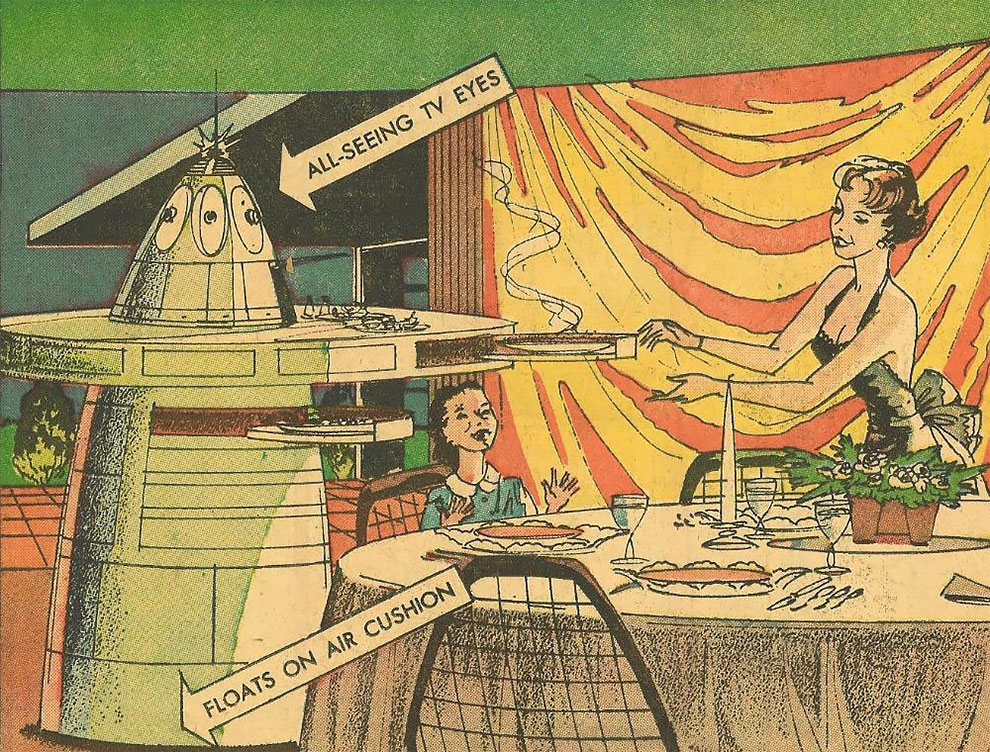 This robot butler may not have the personality of Rosey, but it seems to get the job done. (If that job included watching you and your family while you sleep with its “All-Seeing TV Eyes.”) 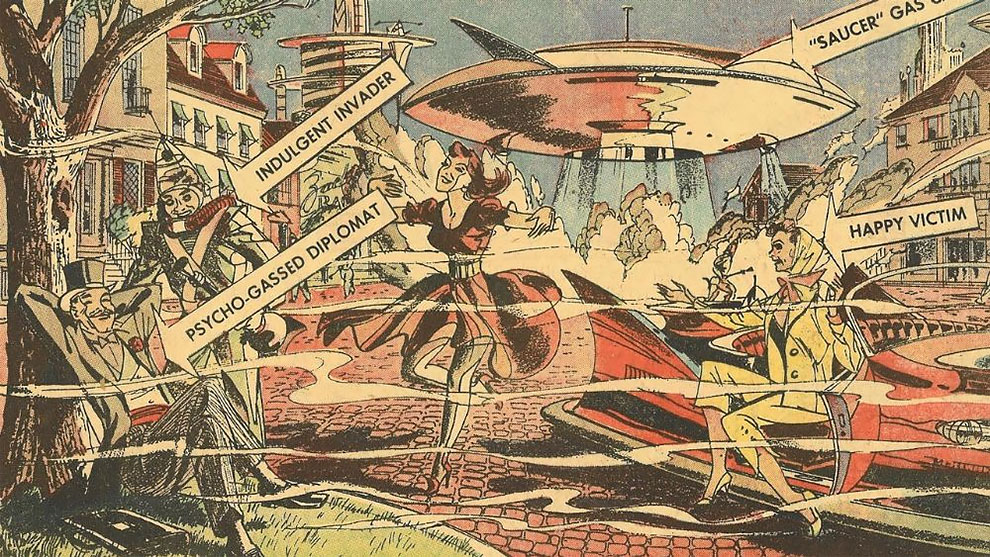 During the Cold War both the U.S. and Soviet Union were working on different drug-induced methods of subduing enemy populations. And frankly these “happy victims” and “psycho-gassed diplomats” don’t look so upset. BRING ON THE HAPPY GAS, RUSKIES! 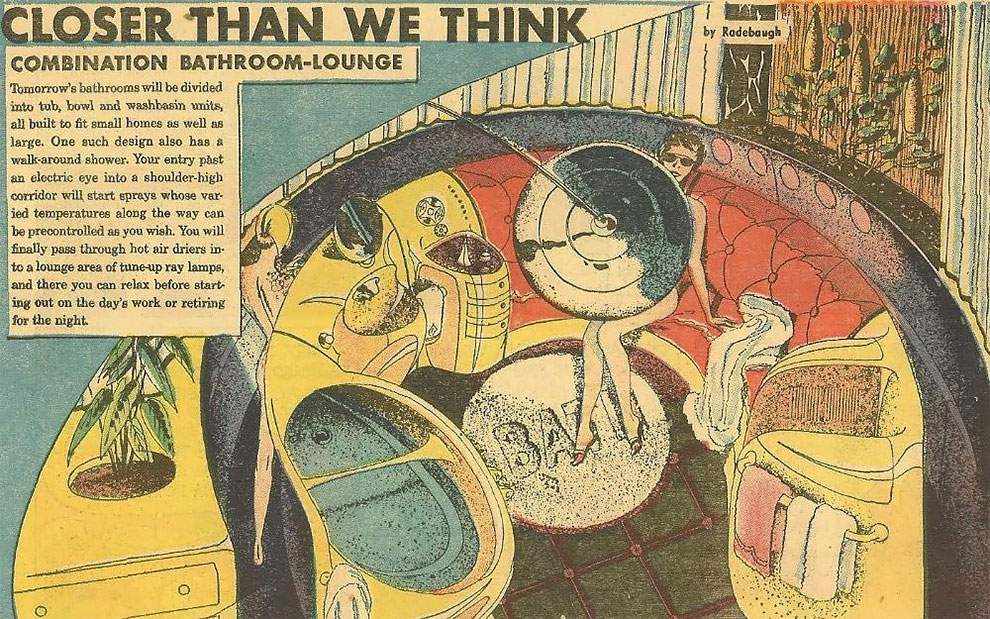 Do you ever wonder why Americans call it a restroom? Because we like to sit in there and rest. This combination bathroom-lounge was really going to take our resting to a new level.

The fully electric car is beginning to hit the mainstream. But it was a long time coming. This futuristic electric car runner was supposed to be perfect for quick jaunts to the farmer’s market.

Computerized Desk for the Home 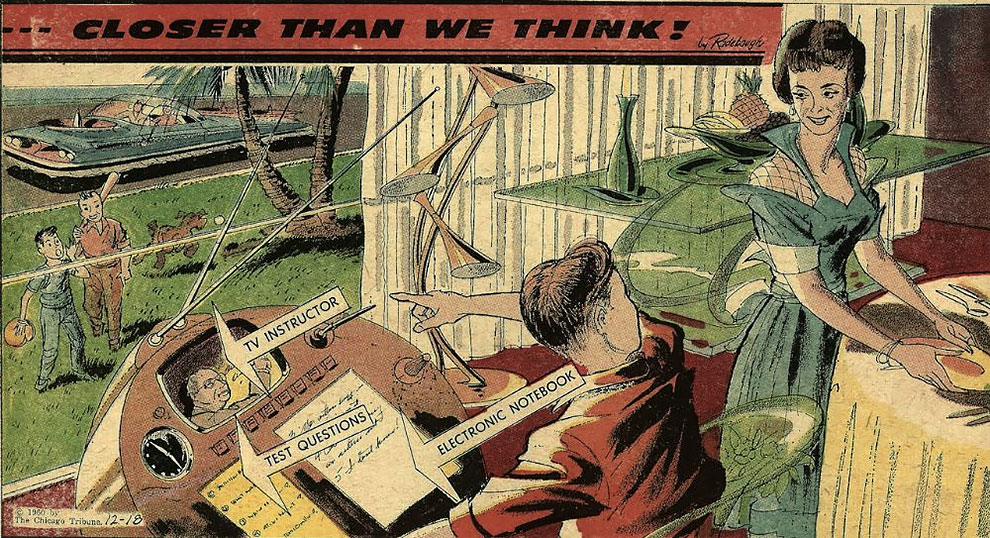 This desk was going to fix the Baby Boomers’ school overcrowding problem for good — by keeping those rugrats at home, where they belong! 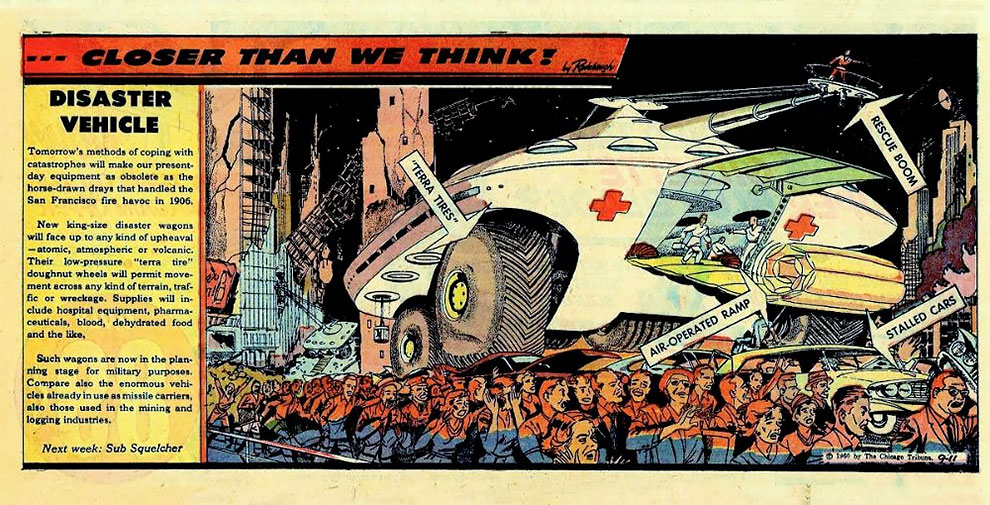 Whenever disaster hits in Radebaugh’s world of Closer Than We Think, we never learn what destroyed the world. But given the masses of people fleeing a burned out shell of a city, this one can’t be good.

The checkout robots now so common at major supermarket chains are a huge pain. But just imagine if you could swear at them and they’d understand you! 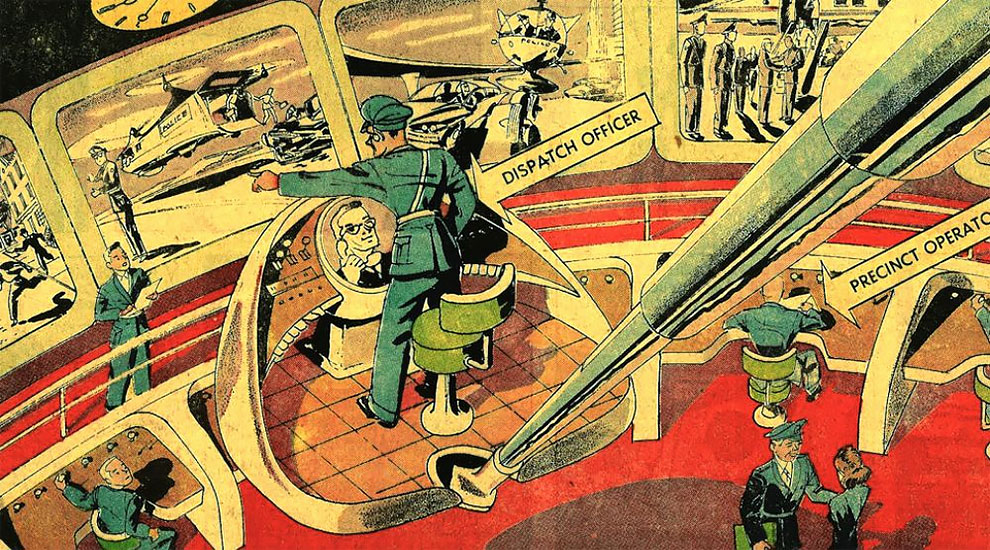 The authorities really seem to have an eye on things in this police dispatch center of the future. Serve, protect, and watch everything that moves.

The surgery of tomorrow would be painless and knife-less. At least that’s what Closer Than We Think promised. Some versions of “bloodless surgery” have indeed come to pass. But chemotherapy isn’t a walk in the park, as any cancer survivor can tell you.

Remember when “factory farm” wasn’t a dirty phrase? But in the world of Closer Than We Think, giant tomatoes being injected with mystery substance by a man in a white lab coat isn’t something to fear. 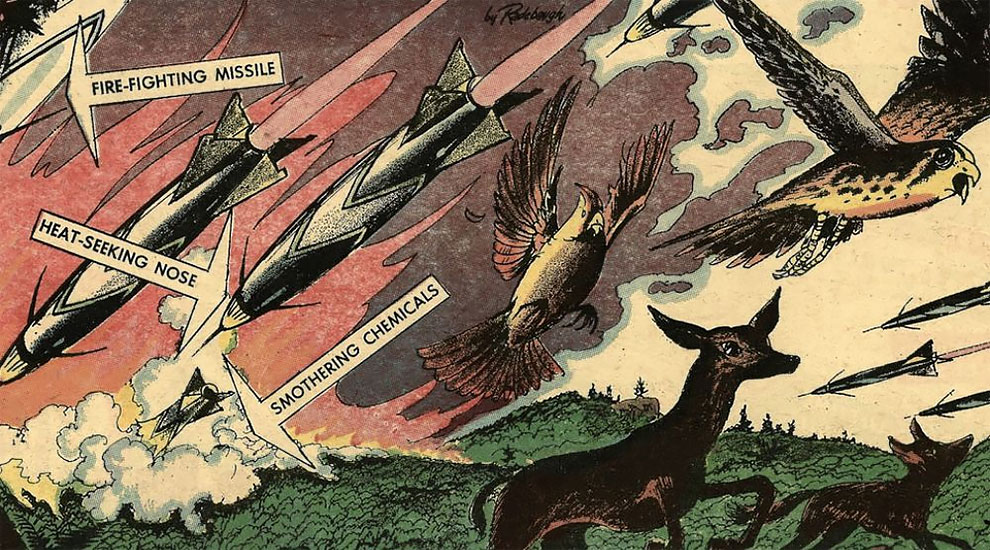 There’s a forest fire raging out of control! Quick, bomb it into submission! 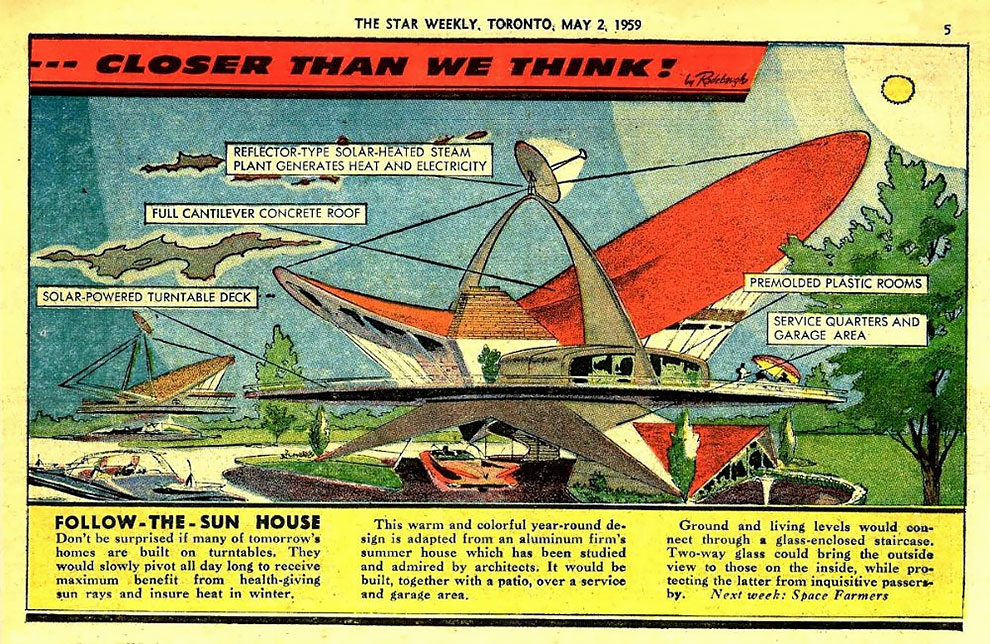 This house of the future was supposed to turn and “follow the sun” to provide energy. But one has to imagine that the energy it would take to swivel an entire might make this design impractical?

The concept is rather ironically named, but Motopia was supposed to be a pedestrian’s paradise. Moving sidewalks, and cars segregated from the pedestrian-level traffic? It actually sounds like a pretty cool set-up. 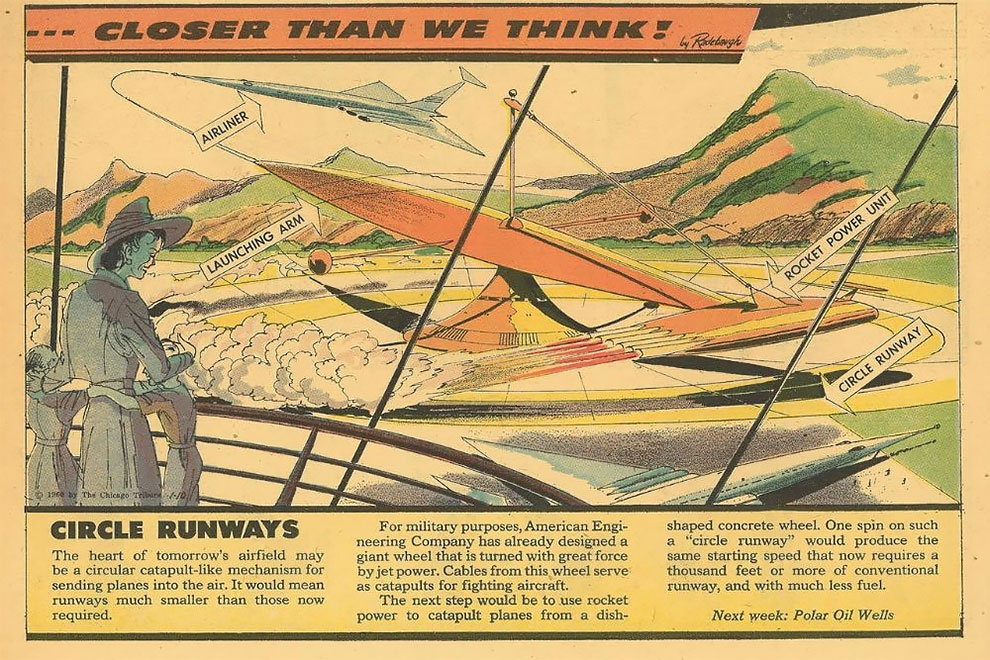 Finding alternative sources of protein was a pressing concern for the people of the 1950s and ’60s. With the rise of the middle class and people gobbling down more and more meat, harvesting bizarre protein-packed plants and creating faux-meat dishes seemed like the only logical solution.

Apparently in the 1950s and ’60s people earnestly believed that space travel would become so common that people suffering from various illnesses would simply zip up to hospitals in the sky for the best treatment.

As skyscrapers became popular at the turn of the 20th century, one of the biggest hurdles facing builders was figuring out how to put out any fires that might start. In the world of Closer Than We Think, flying fire engines saved the day.

Office of the Future

The desk of the future certainly looked more space age than was warranted. But that really was the entire point of techno-utopian futurism.

Not only were the cars going to be driverless, the trains of tomorrow would be as well. The porters? Well, those guys were still flesh and blood.

Urban renewal was a hot button topic of the 1950s and ’60s. Many cities experimented with building pedestrian malls. Some worked out better than others. 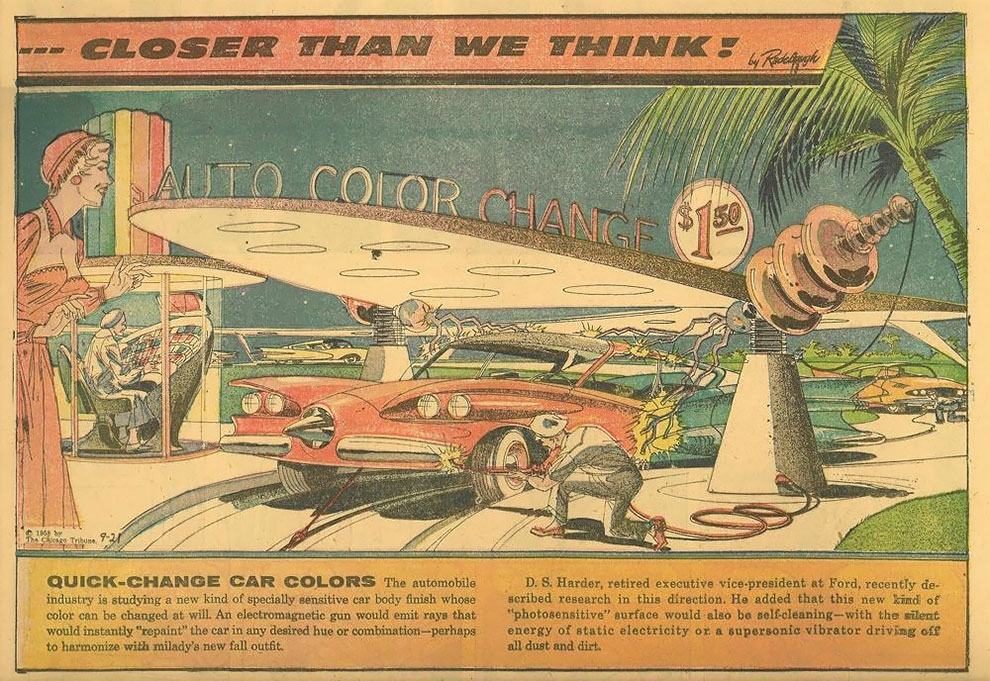 What’s the height of futuristic postwar decadence? Maybe changing your car color every day via “electromagnetic gun” just because you can. With the fashionable color changing so frequently here in the world of the future, you’re practically losing money if you don’t.