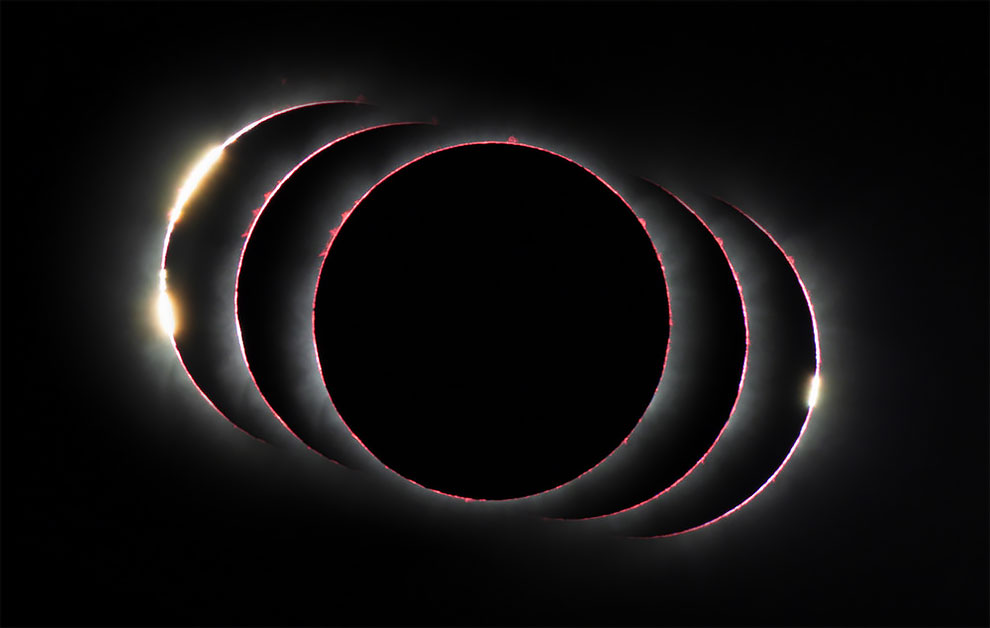 Overall winner and astronomy winner: Three Diamonds in the Sky by Petr Horálek. When a solar eclipse started in November 2013 (on the left side of the image), there were two “diamond ring” solar flares, which was unusual. The magnitude of coverage from Pakwero, Uganda, was just 1.00259, which means the sun was only just covered and light could shine through two parts of the lunar limb. (Photo by Petr Horálek/Royal Society Publishing Photography Competition 2018) 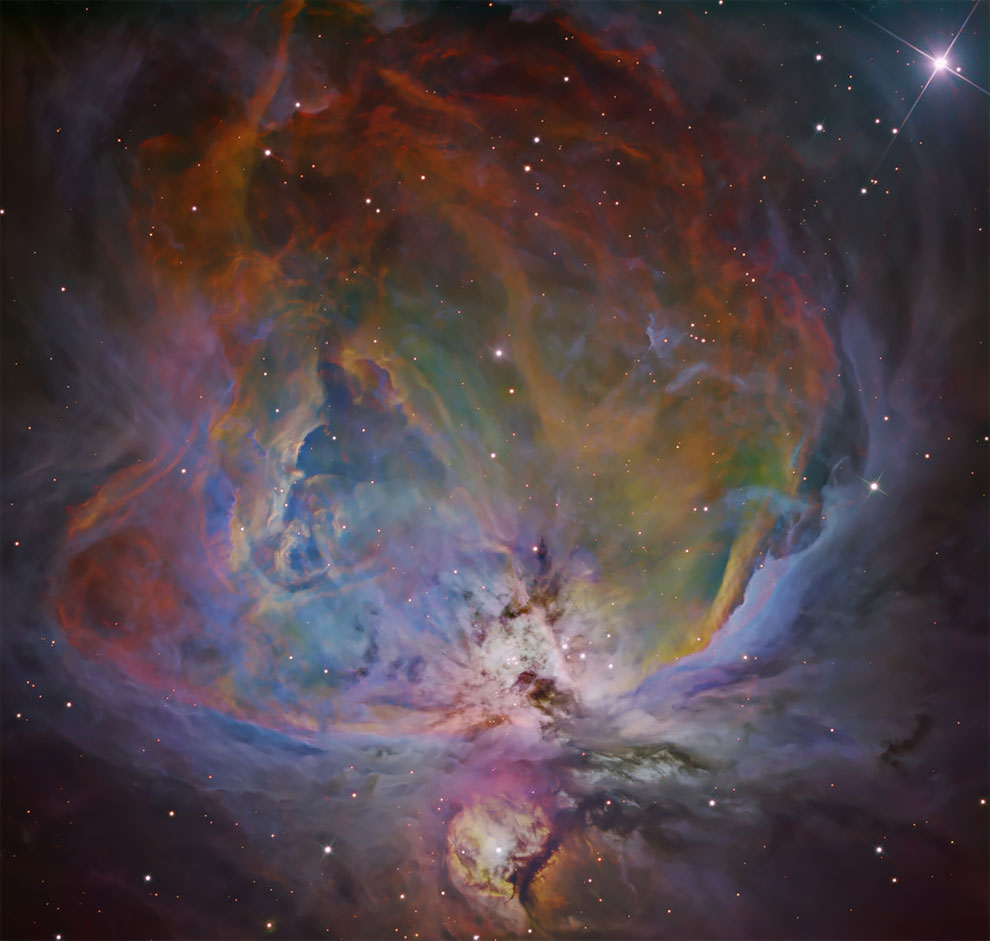 Astronomy runner-up: The Orion Nebula by Bernard Miller. An image of the Orion nebula processed with a six-filter colour mapping process. The process combines data from six filters (red, green, blue, Ha, SII and OIII). The image is a combination of over 39 hours of exposure over a span of six weeks at Dark Sky New Mexico, USA. (Photo by Bernard Miller/Royal Society Publishing Photography Competition 2018) 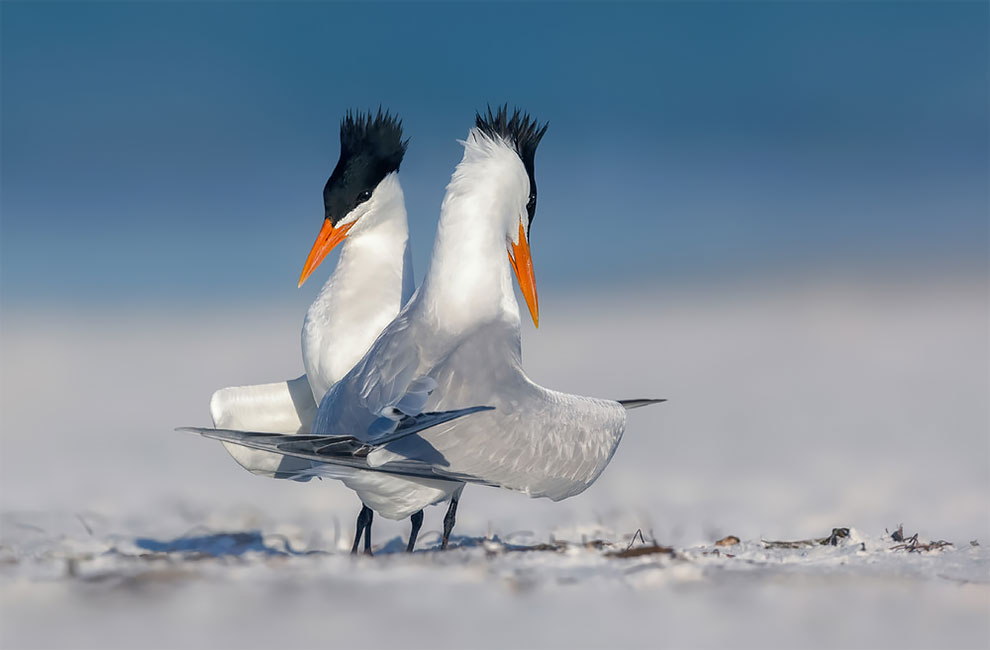 Behaviour winner: Courting Royals: two royal terns in courtship display by Kristian Bell. Another beautiful morning on a beautiful beach on the Gulf Coast of Florida seemed to prompt these two royal terns to commence an intricate courtship dance. The photograph was taken with a Canon 300mm lens and 2x extender. (Photo by Kristian Bell/Deakin University/Royal Society Publishing Photography Competition 2018) 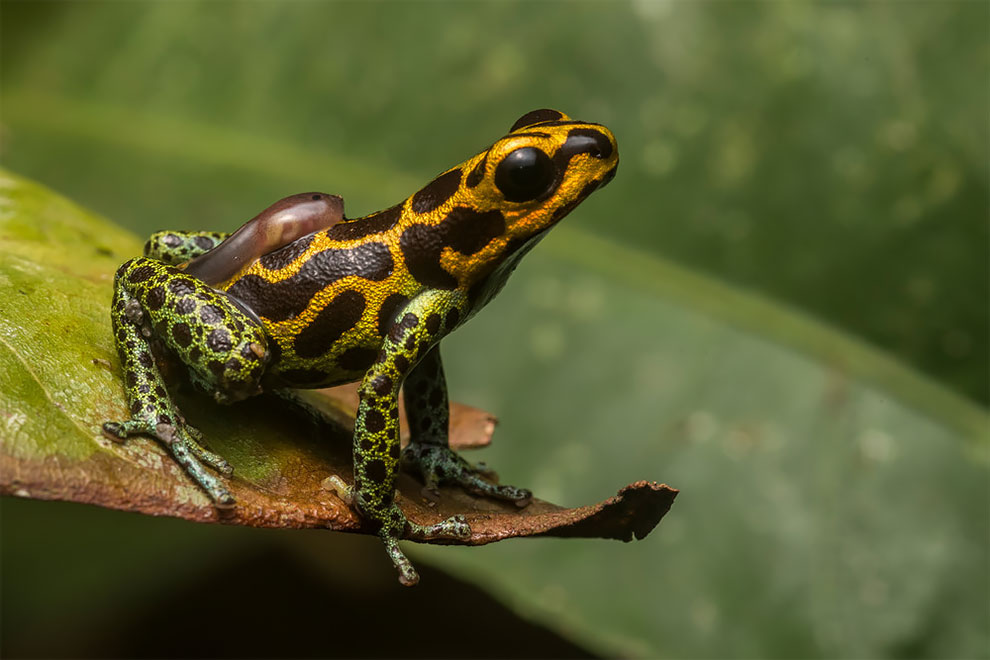 Behaviour runner-up: Baby on Board by Anton Sorokin. Parental care is a behaviour associated with birds and mammals, but some amphibians are devoted parents, such as the mimic poison frog ( Ranitomeya imitator), which exhibits obligate biparental care. Here, the male transports the tadpole on his back to a pool of water. (Photo by Anton Sorokin/East Carolina University/Royal Society Publishing Photography Competition 2018) 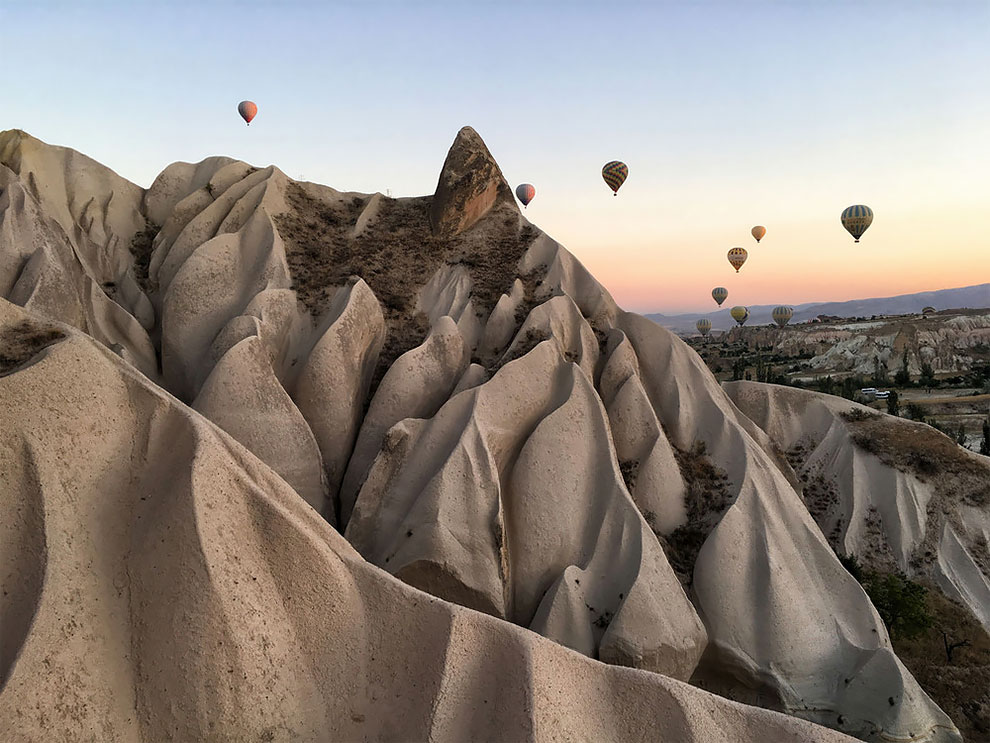 Earth science winner: Cappadocia, Turkey: Born of Fire, Earth, Air and Water by Katharine Cashman. This photograph highlights the volcanic landscape of Cappadocia, Turkey. It was created by a volcanic eruption (fire), is made of volcanic ash (earth) and has been sculpted by wind and water. The view is from a hot air balloon. (Photo by Katharine Cashman/University of Bristol/Royal Society Publishing Photography Competition 2018) 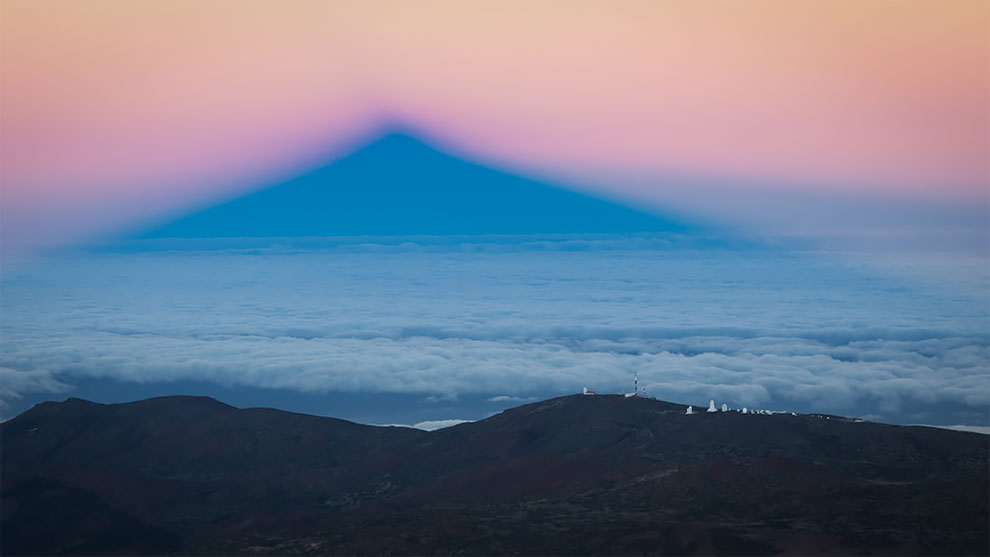 Earth science runner-up: Colossus by Alejandro Roman Gonzalez. The shadow of Mount Teide in Tenerife at sunset towers over the Slooh Teide observatory. The sea of clouds shrouded the landscape at lower altitude. The colours in the sky are due to the reflection of the different wavelengths of the white light as the sun sinks below the horizon. (Photo by Alejandro Roman Gonzalez/University of Exeter/Royal Society Publishing Photography Competition 2018) 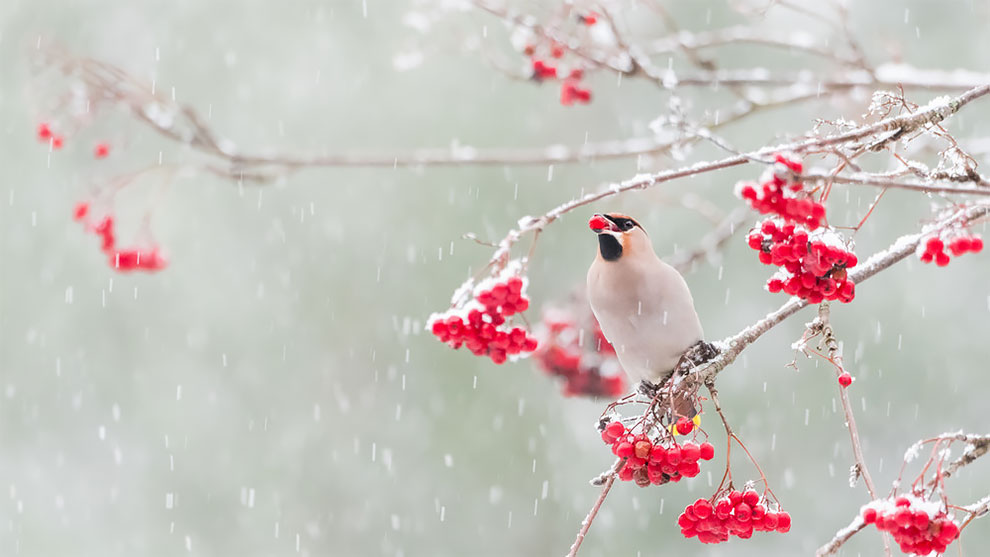 Ecology and environmental science winner: Waxwing and Rowanberries in the Snow by Alwin Hardenbol. Bohemian waxwings ( Bombycilla garrulus) lust after rowanberries in winter. This one came to the trees outside the photographer’s office in Finland. (Photo by Alwin Hardenbol/University of Eastern Finland/Royal Society Publishing Photography Competition 2018) 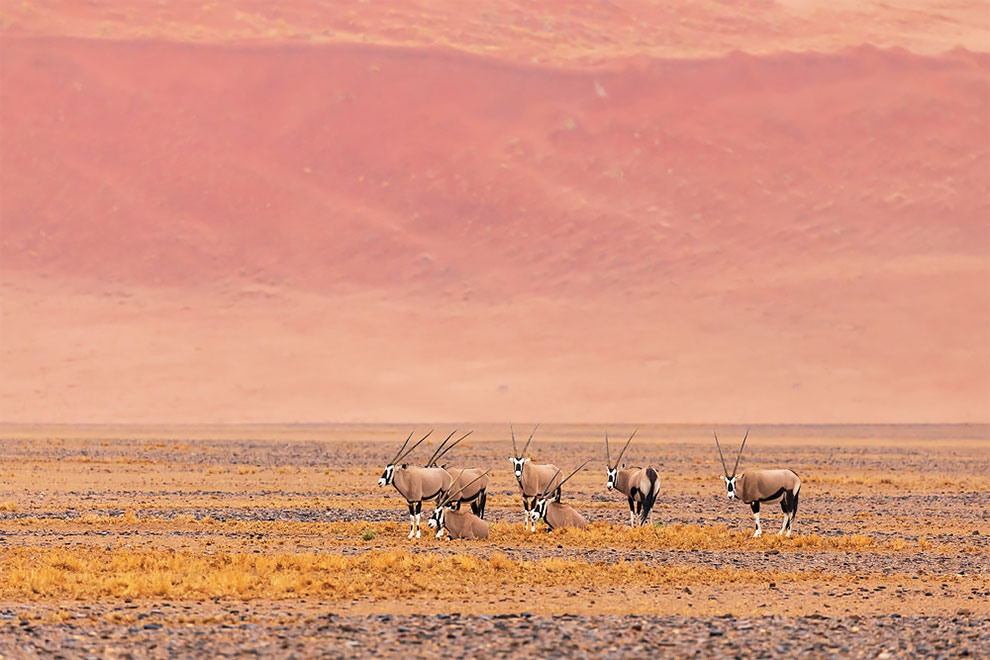 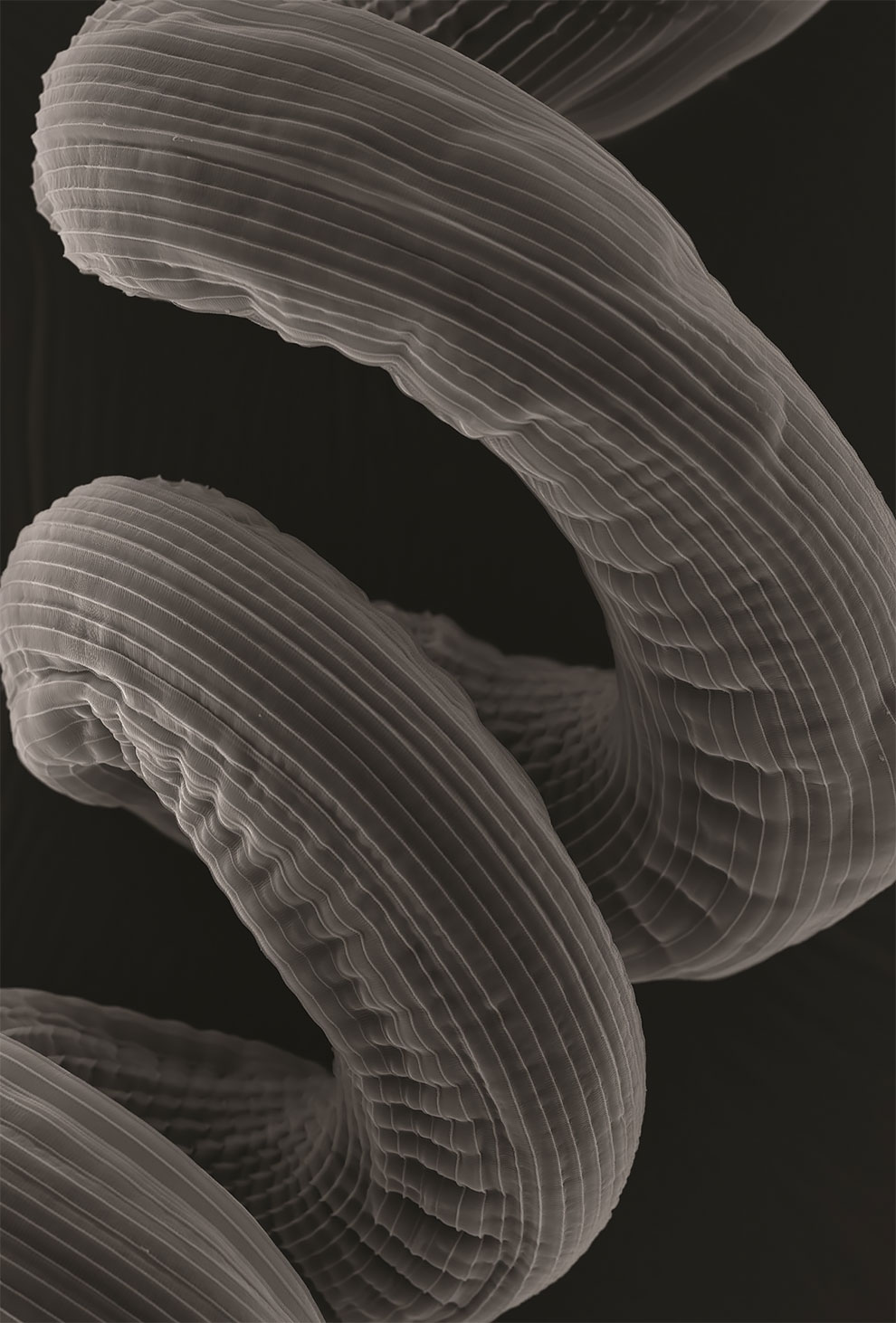 Micro-imaging winner: Going round and round by Leandro Lemgruber. At the University of Glasgow’s Institute of Infection, Immunity and Inflammation, one research group studies the exploitation of the host’s own immune system by helminth parasites. The group uses a rodent parasite, Heligmosomoides polygyrus, which inhabits the intestinal space of its host and coils around the intestinal villi. (Photo by Leandro Lemgruber/Institute of Infection, Immunity and Inflammation University of Glasgow/Royal Society Publishing Photography Competition 2018) 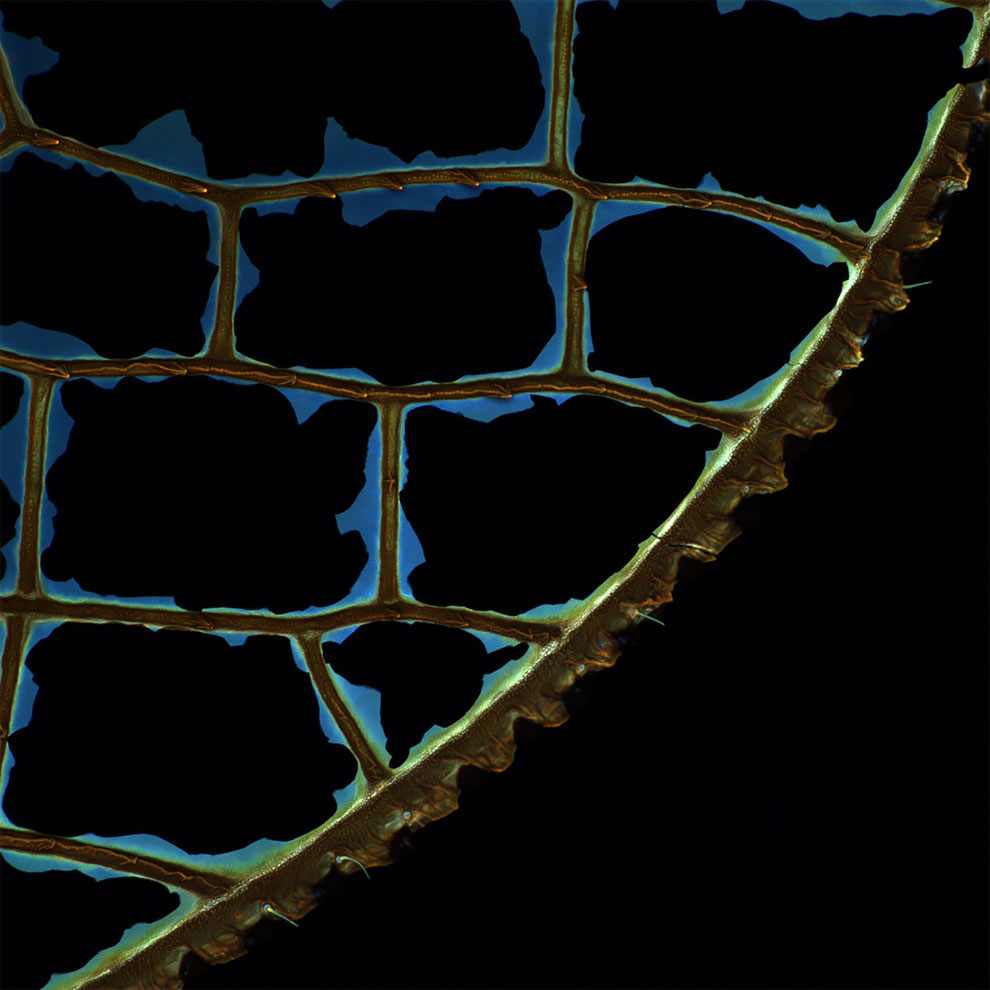 Photographer Captures Fantastic Photos of New York Reflected in Glass
Stunning Photographs of Debbie Harry Painted by H.R. Giger, the Creator of "Alien"
A Beautiful Photo Series of Audi F103
Photographer Shows The Atmosphere Of Utopian Hong Kong Of The 80s, Its Landscapes And Surreal Architectural Forms, Frozen In Timelessness Ander The Diffused Sunlight
Osama is Inside Everyone of Us
Couple Hilariously Recreates Newborn Photo Shoot with Their Puppy
Donyale Luna – The First Black Supermodel, Whom History Forgot
Nature-Inspired Tattoos Combine Vintage-Style Etchings of Fauna and Flora
Vintage Photos Capture Springtime In Clarksville, Arkansas In 1953
Mesmerizing Before And After Photos Of Drag Transformations
Underwater Portraits Of People Diving Into A Freezing 4°C Dunking Pool
This Hidden Chilling Forest Path Looks Like A Trail To Mordor
Unseen Photos of the 1965 Rolling Stones
Life Of The 1850s: Amazing Photos That Show How The World Looked Like Over 160 Years Ago
Photographer Captures The Lives Of People Living In Yakutia, One Of The Coldest Regions In Russia
Chilean Artist Finds Humor In Everyday Life, Here Are His Superb Minimalist Comics
Photographer Captures The Touching Moments Of People Saying Goodbye To Their Pets
Artist Jung Lee Constructed A Series Of Neon Light Sculptures That Were Installed Against Cinematic Landscapes
ZSL Animal Photography Prize 2015
Wonderful Photos Capture Everyday Life of Florida in the 1980s
An English Student’s Street Photographs of Edinburgh In the 1950s and 1960s
Elephant Rose by Jean-Baptiste Courtier
Beautiful Drone Photography Over South Australia By Mr Bo
The Surreal And Beautiful Photography Of Tokyo's Levitating Girl
contest, nature, photography, science, society, winners