The Industrial Cutaways Of Frank Soltesz: Amazing Cross Sections Of Modern Life From The Mid-20th Century 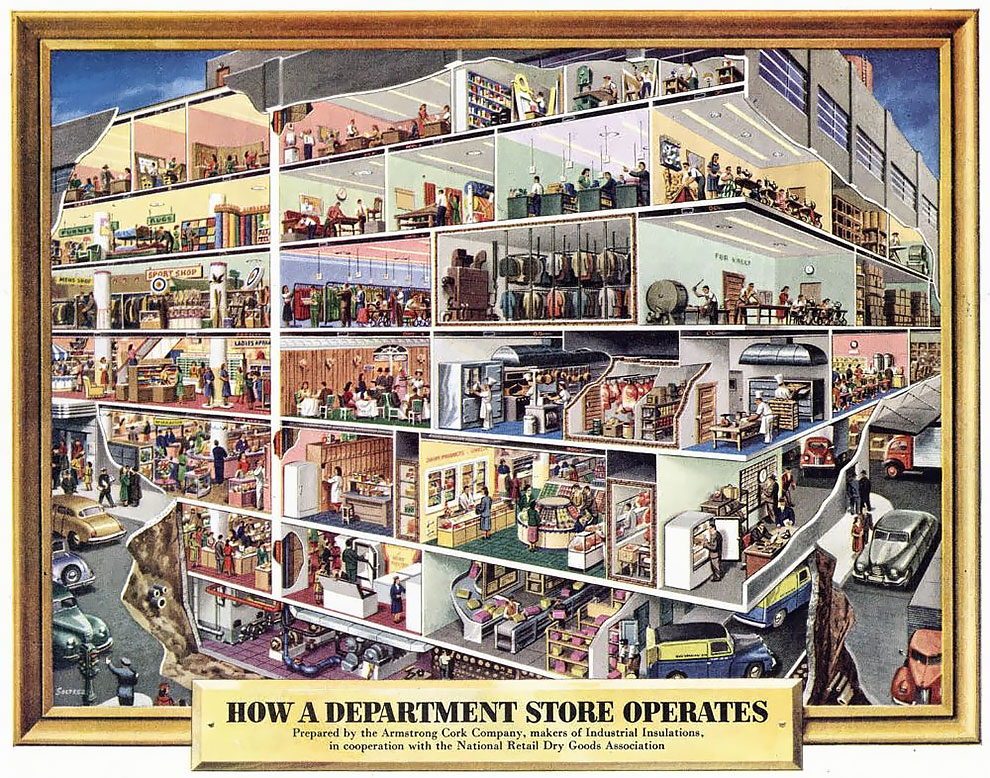 Born in Pennsylvania in 1912 and active from the 1930s to the 1960s, Frank Soltesz was a versatile commercial illustrator who had a love for large cutaways. He spent part of his career working for the BBD&O advertising company.

Among his best work is a series of 29 advertising cross-sections published between 1947 and 1951 to show how the Armstrong Cork Co. company’s products were utilized. These illustrations appeared in the Saturday Evening Post and show lavishly detailed images of buildings and factories with their walls partially removed. The more you look at the scenes and the tiny human figures as they move about, the more engaging they become. Each illustration has an inset with the key. They had a drawn frame and title and readers could request 21 by 22 inch copy suitable for framing or even a free booklet with some of the illustrations.

Soltesz was a member of the American Watercolor Society as late as 1981. In addition to his commercial work for Armstrong Cork Co., Soltesz worked with accounts of other companies such as TWA (an example below), General Electric, General Motors, Goodyear Tire and Rubber, etc. Apart from the Saturday Evening Post, his work appeared in many of the great periodicals of his time like Life, Colliers, Esquire, Sports Illustrated, Forbes, Fortune, Time, Business Week, U.S. News and World Report.

Below are some of amazing vintage cutaways by Frank Soltesz. 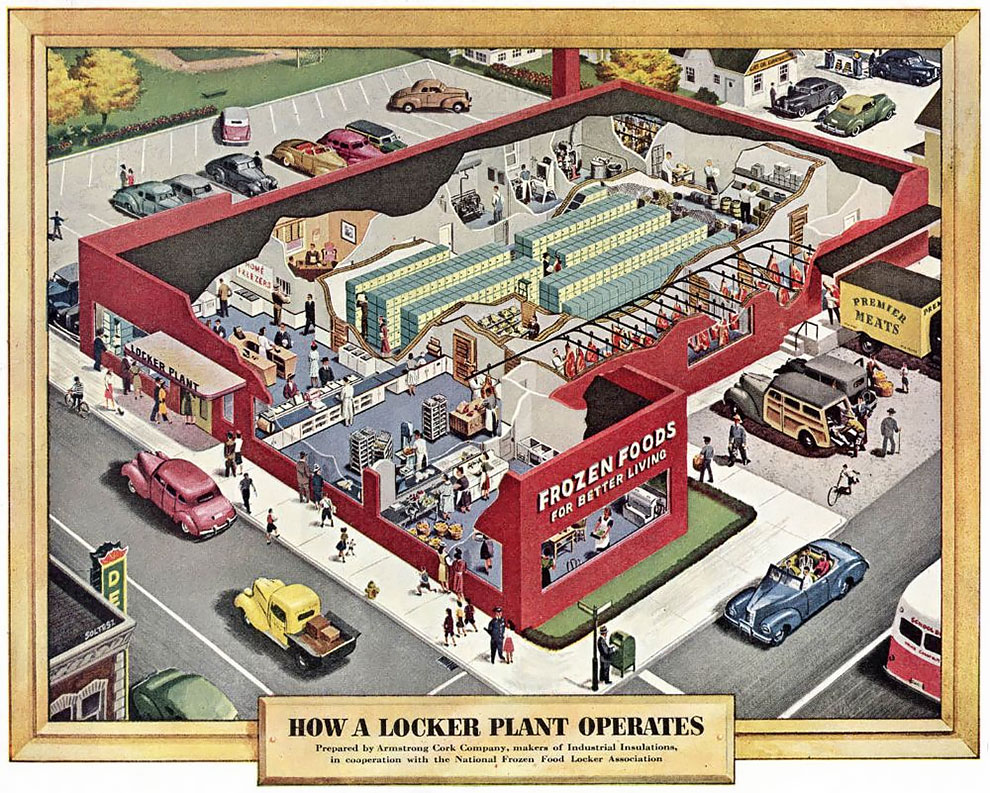 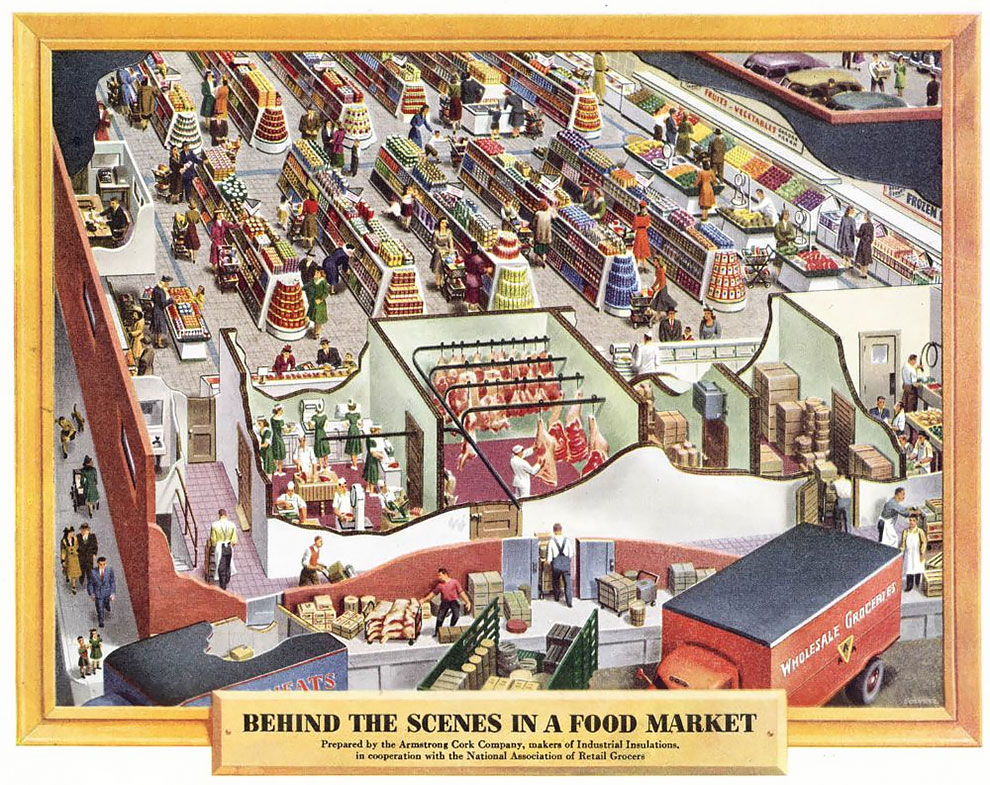 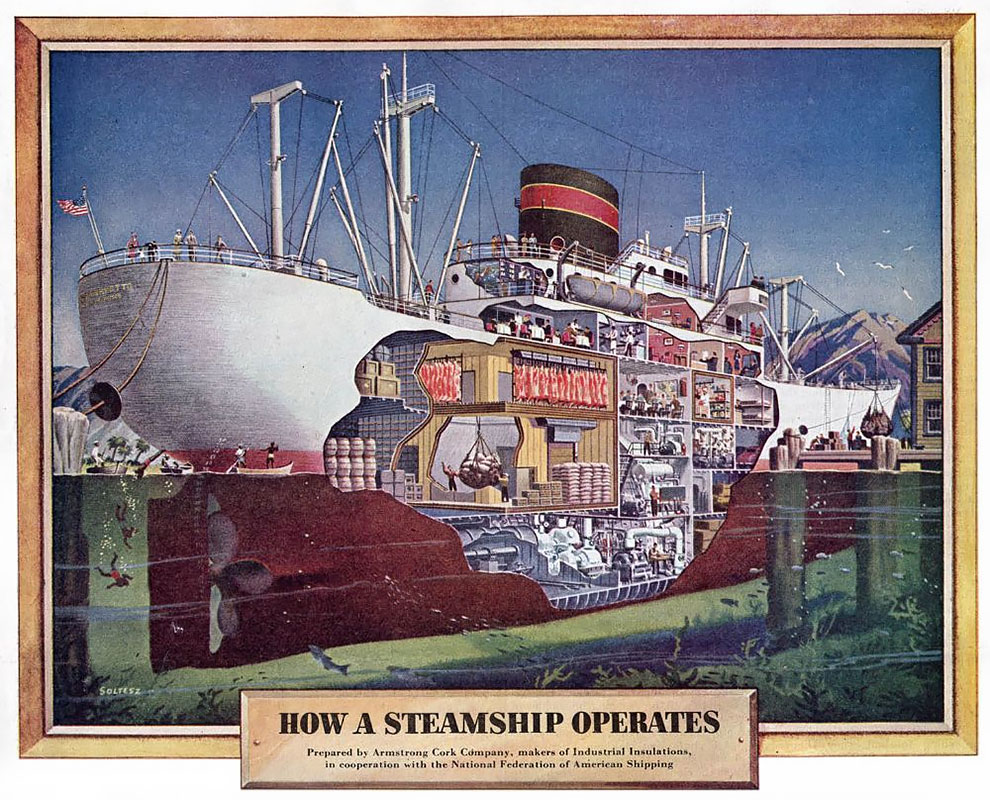 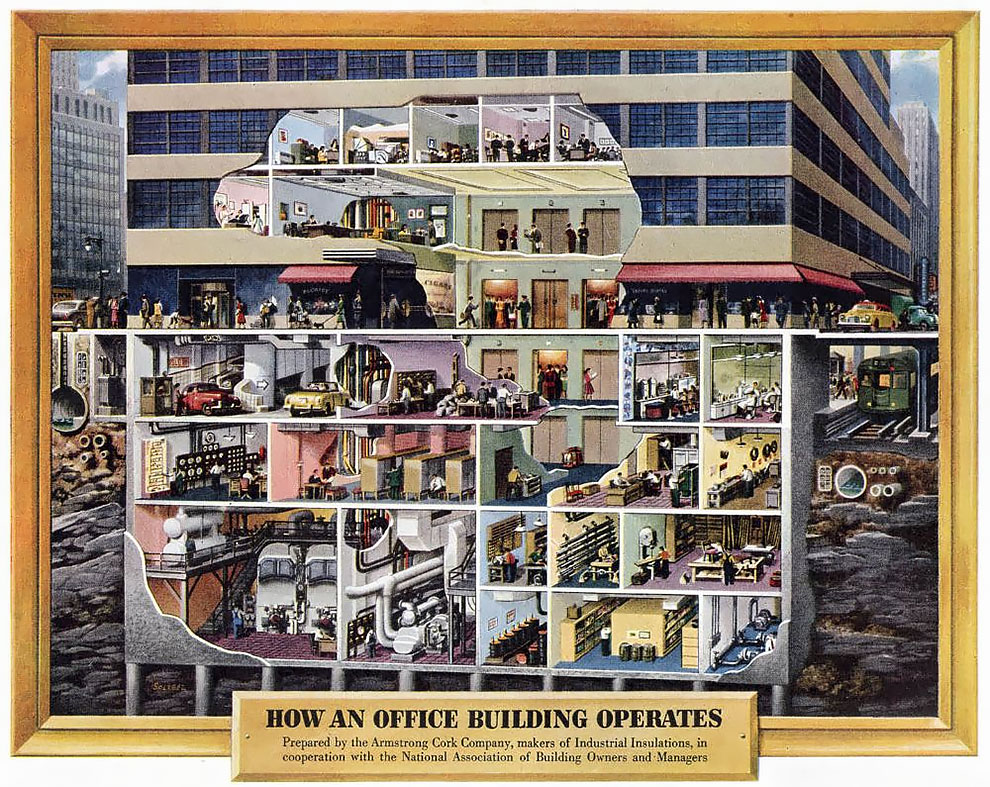 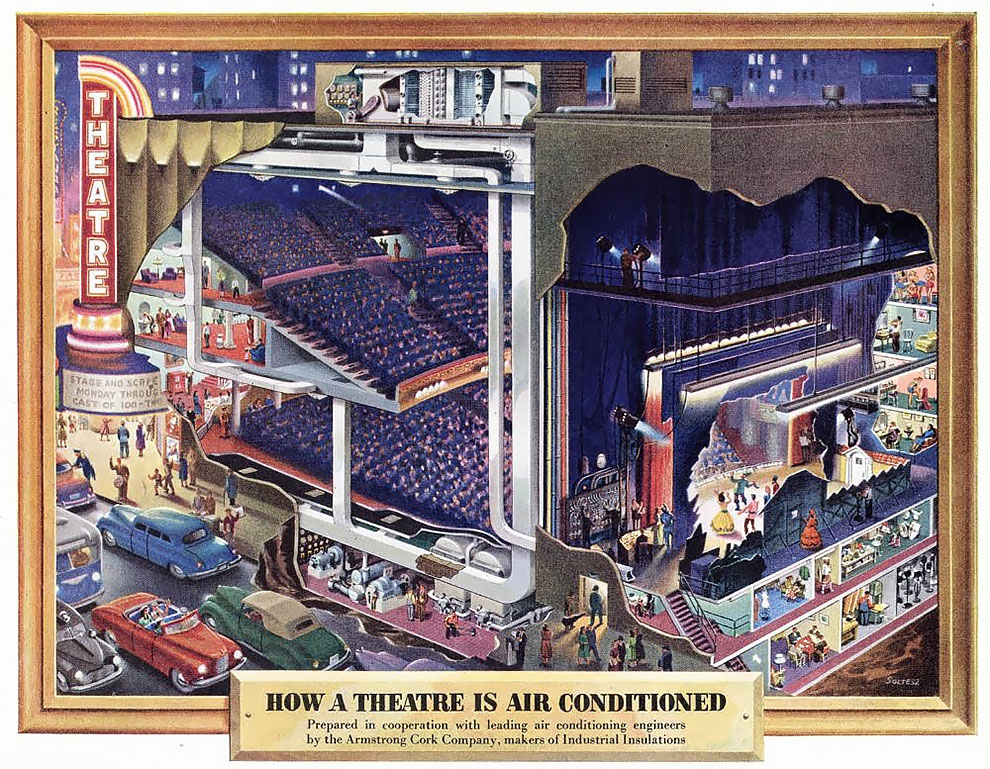 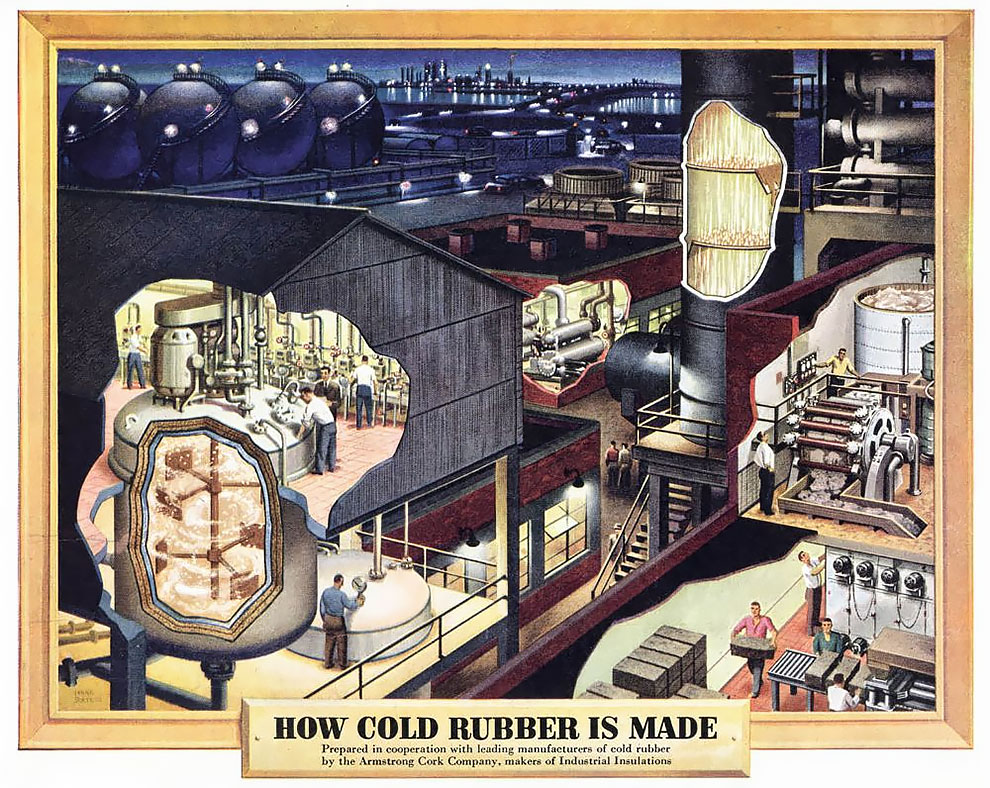 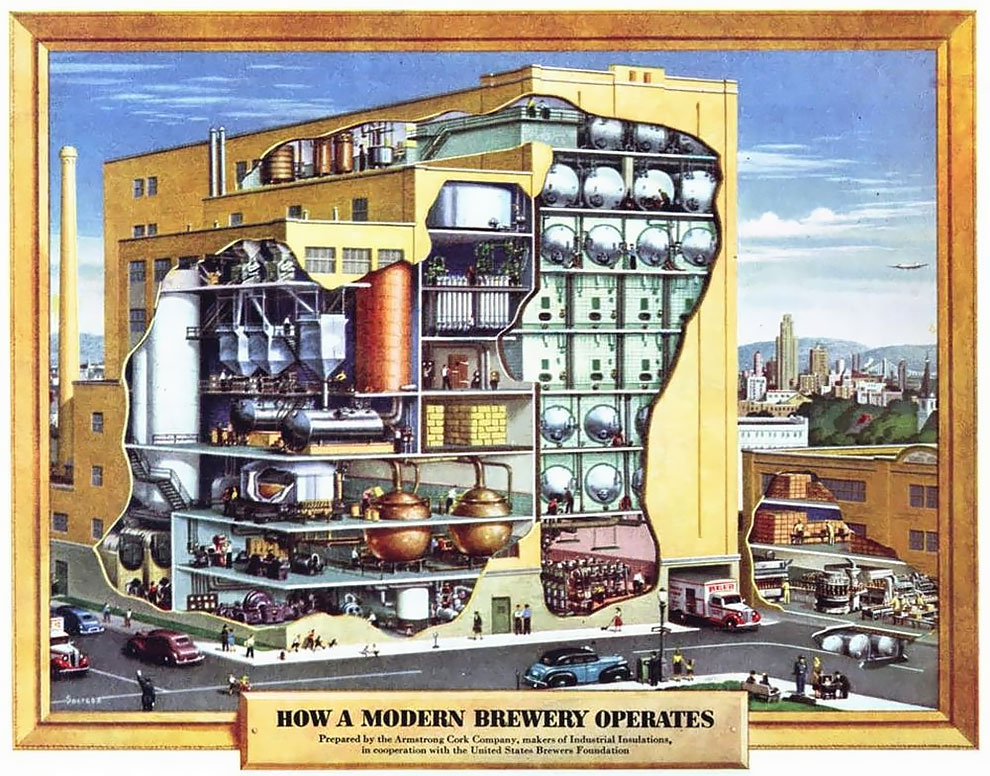 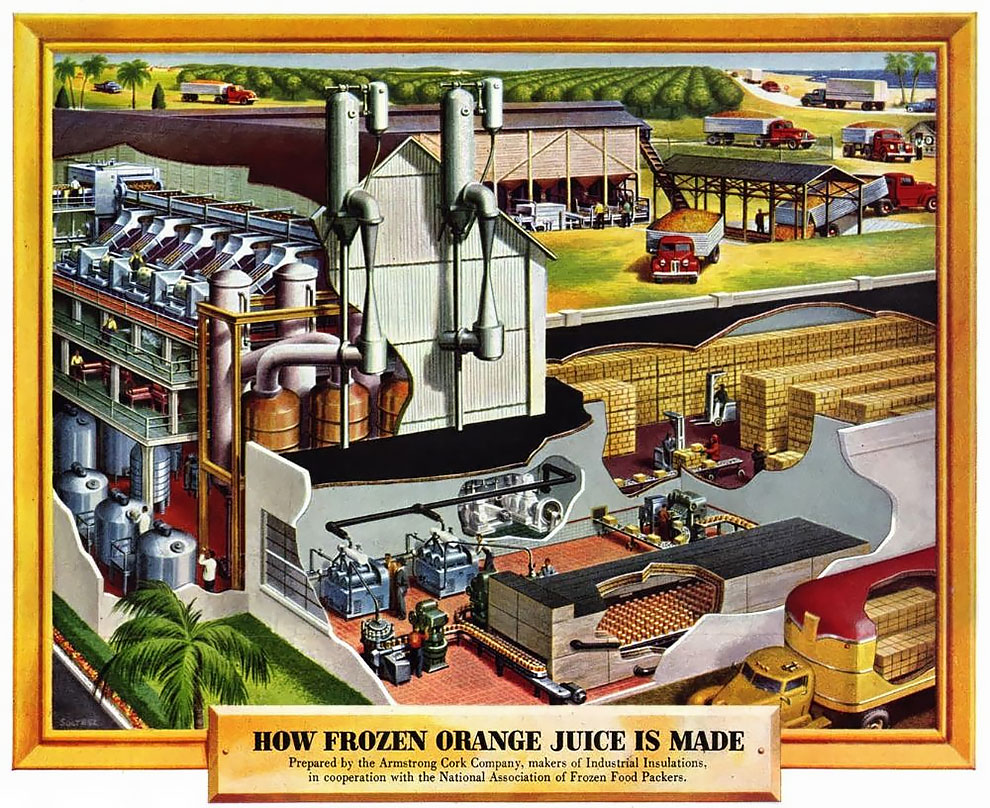 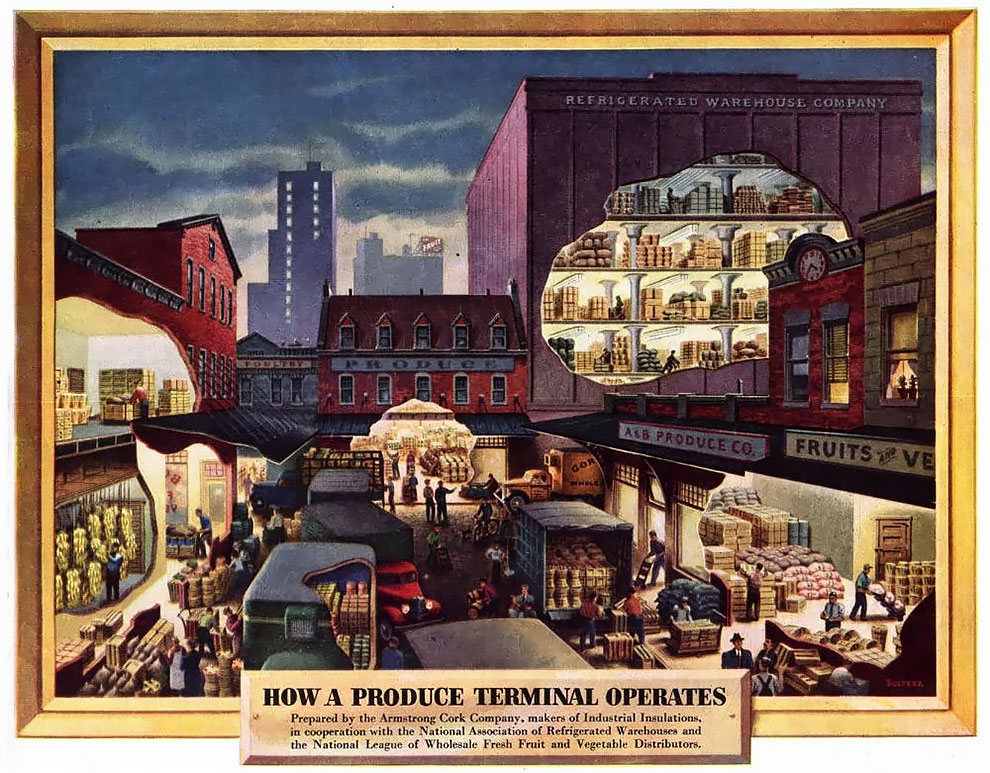 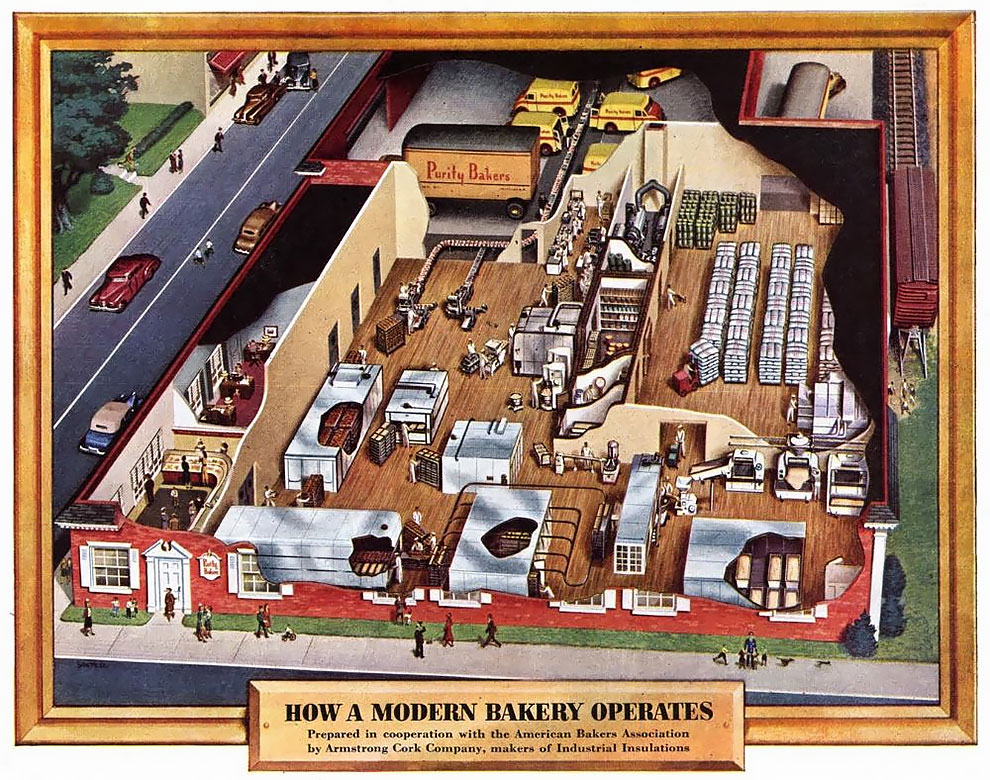 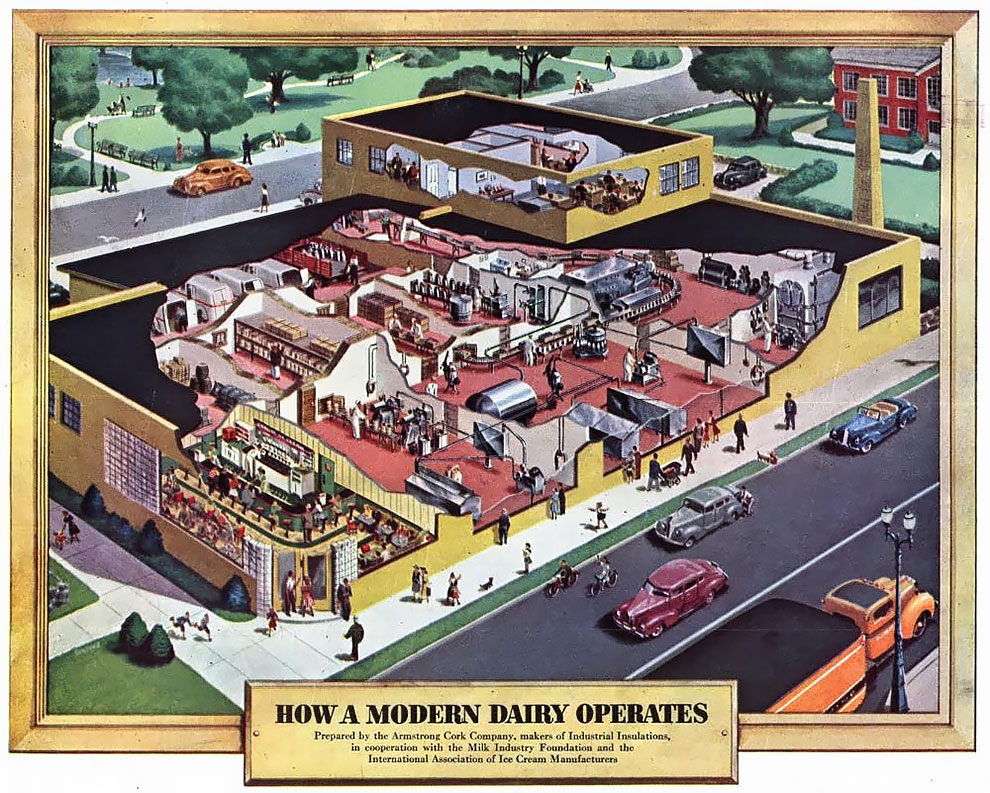 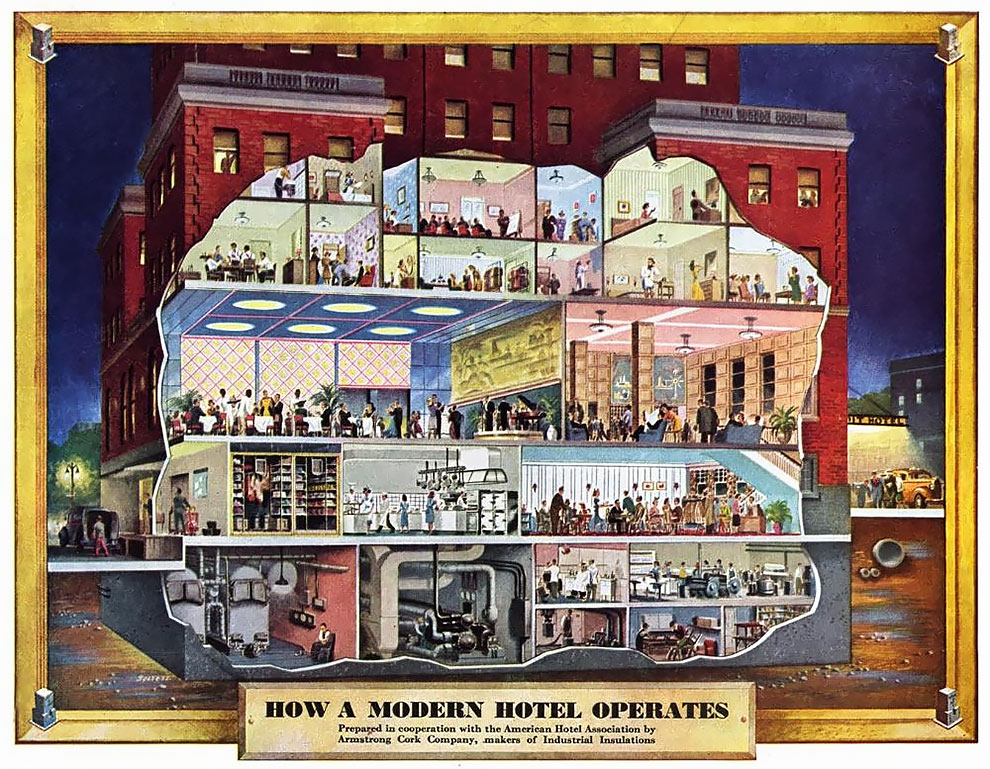 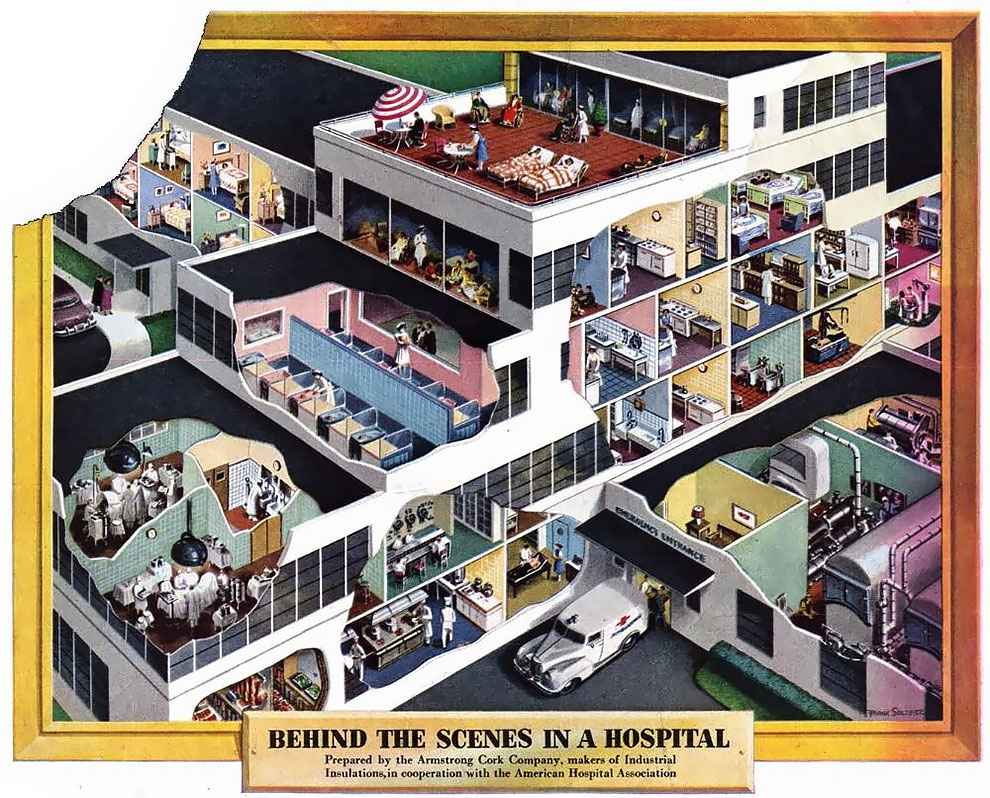 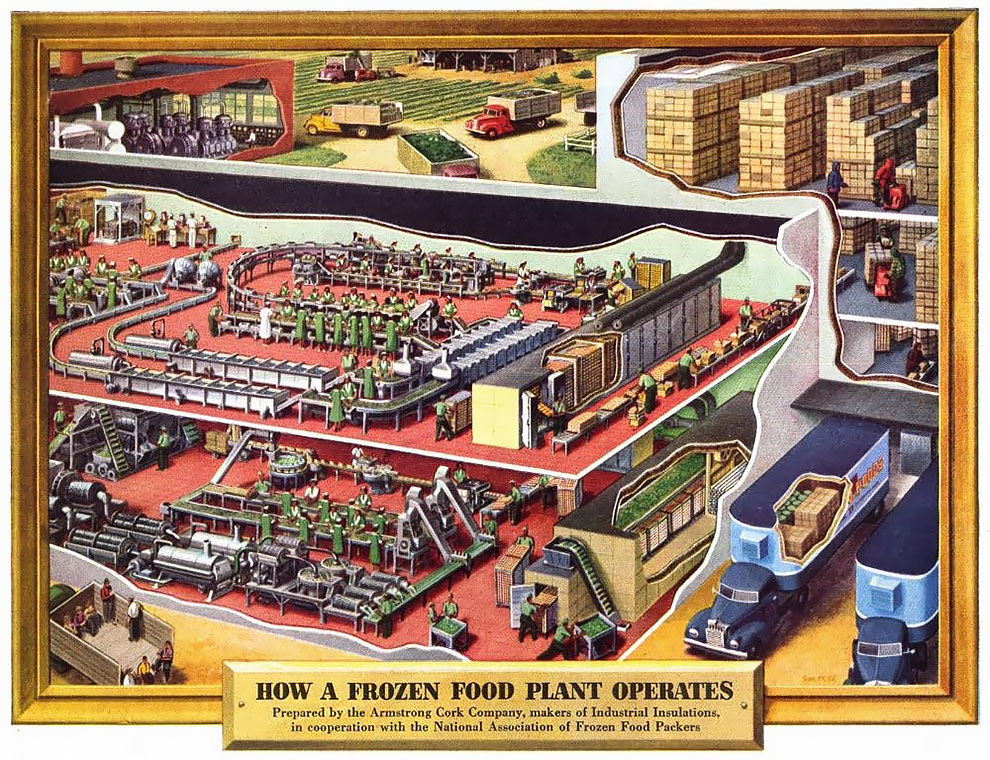 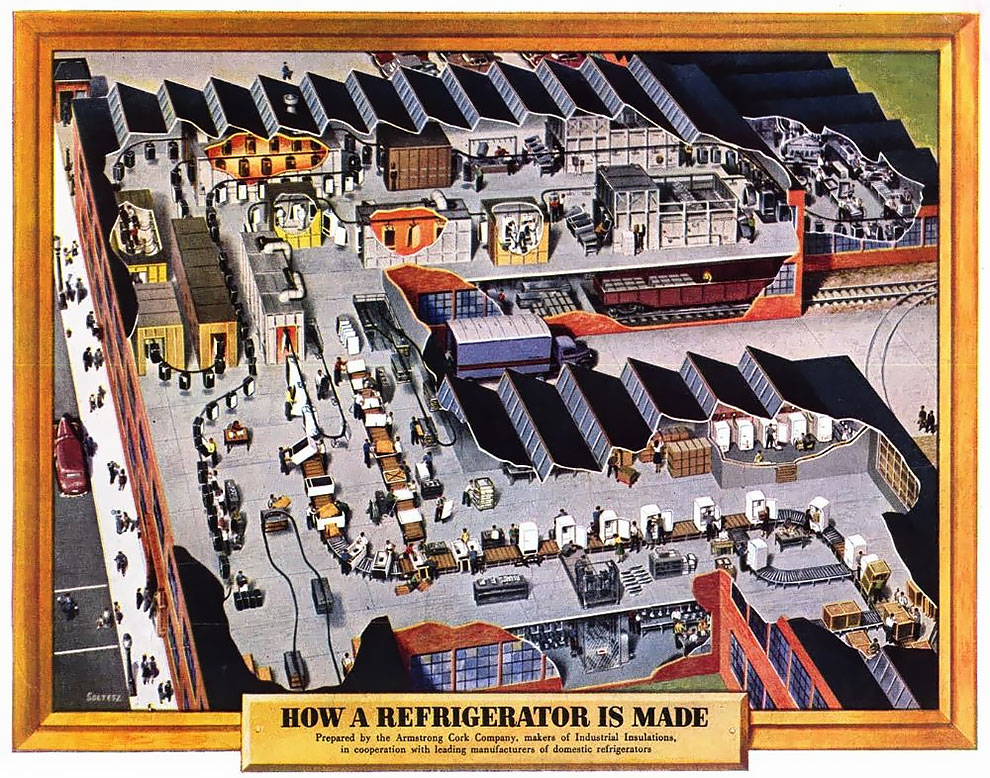 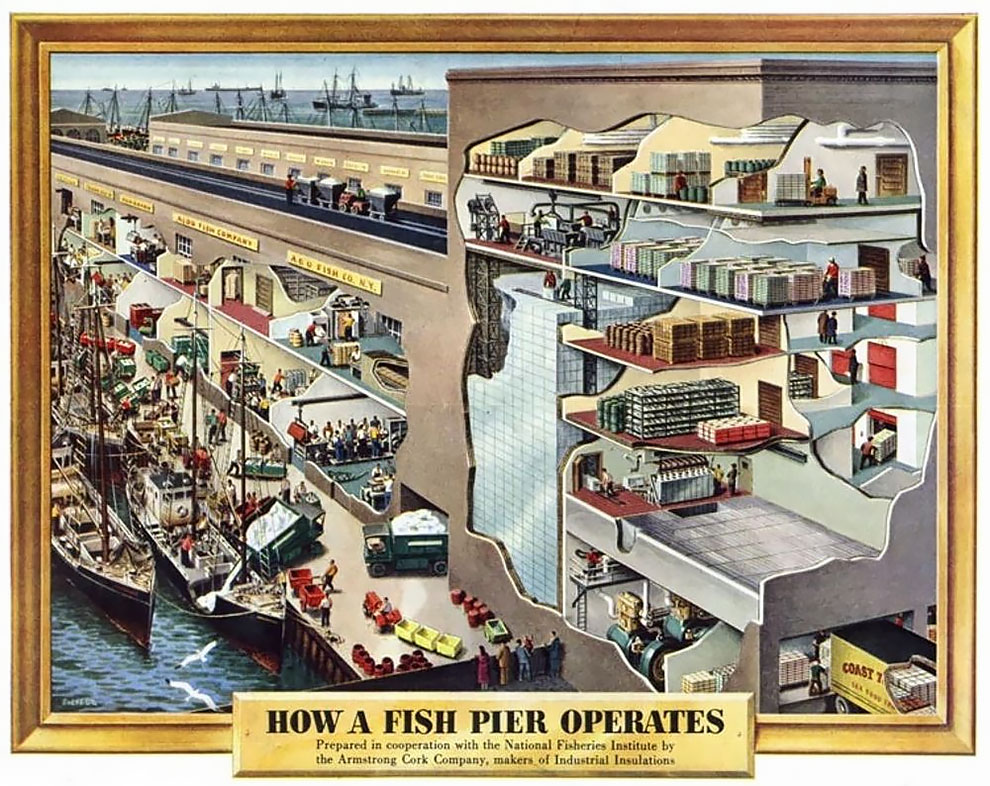 After Watching Chernobyl, Couple Decided To Design Their Apartment In Soviet Style And Listed It In On Airbnb
Click Keypad Watches for True Geeks
Miniature Scenes Set Amongst Office Supplies By Derrick Lin
Beautiful Pop Culture Illustrations By Alice X. Zhang
Amazing Photographs Capture Punk Scenes in East Germany During the 1980s
A Walking Bicycle That Uses The Mechanical Design Of Theo Jansen’s Kinetic Wind-Powered Strandbeest
Amazing Photos of the Fiat 8V
These Unusual And Sarcastic Illustrations Will Make You Rethink The Way We Live
These Humorous Illustrations Perfectly Sum Up The Reality Of Living With Anxiety And Depression
Classic Cars Vs. Their Modern Versions
Tesla Model S: World’s First Electric Sedan Hits Road
Behind the Scenes Photographs From a 1950s Casting Call for a Long-Haired Model
Vintage Photographs of Early Colossal Vertical Parking Garages, 1920-1960
Virtual Reality Device Allows Users to Wander the Forest through the Eyes of an Animal
This Artist Photoshops Old Paperback Books With Ridiculous Titles
Amazing Vintage Photos Of Portuguese Women From The Azores Islands In Their Tradition Hooded Capes
14 Immortal Black And White Film Scenes Tastefully Colored By Austrian Artist
New York Over 35 Years Ago – 55 Color Snapshots Show The Most Populous City In The United States In 1980
Exercise Your Demons: Funny And Delightful Illustrations By Randyotter
Amazing Behind the Scenes Photos From the Making of ‘A Nightmare on Elm Street 5: The Dream Child’
Your Beautiful Home In 1974 On A Budget
"City Of Light": 1939 New York World’s Fair Diorama In The Making
Charming Photos Of Cool Girls Posing With Their Cars In The 1920s
"A Colorful Day Out To Coney Island": Color Photographs Of A Summer's Escape From New York City In 1948
cutaways, Frank Soltesz, illustrations, industrial, retro, scenes