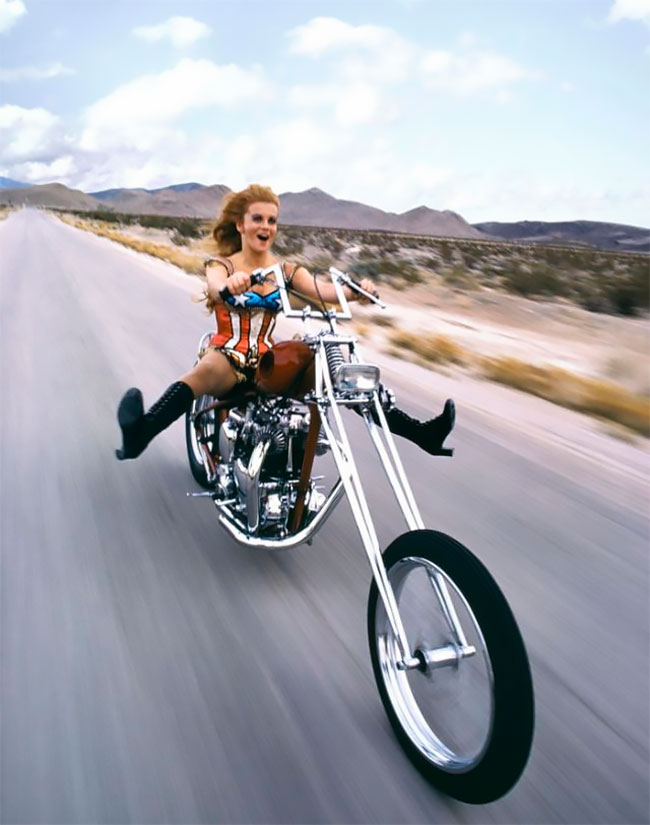 A chopper is a type of custom motorcycle which emerged in California in the late 1950s. The chopper is perhaps the most extreme of all custom styles, often using radically modified steering angles and lengthened forks for a stretched-out appearance. They can be built from an original motorcycle which is modified (“chopped”) or built from scratch. 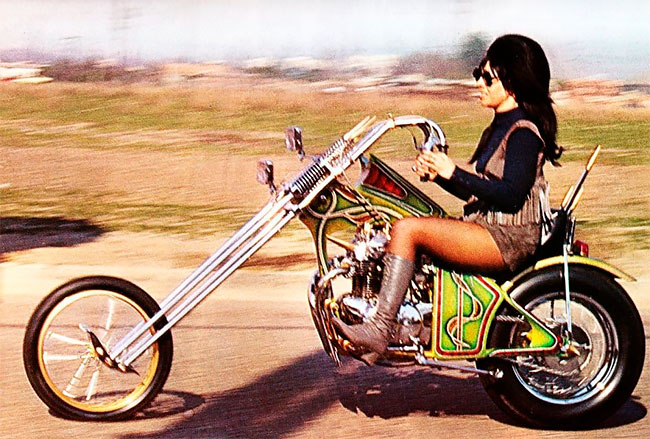 Some of the characteristic features of choppers are long front ends with extended forks often coupled with an increased rake angle, hardtail frames (frames without rear suspension), very tall “ape hanger” or very short “drag” handlebars, lengthened or stretched frames, and larger than stock front wheels. The “sissy bar”, a set of tubes that connect the rear fender with the frame, and which are often extended several feet high, is a signature feature on many choppers. 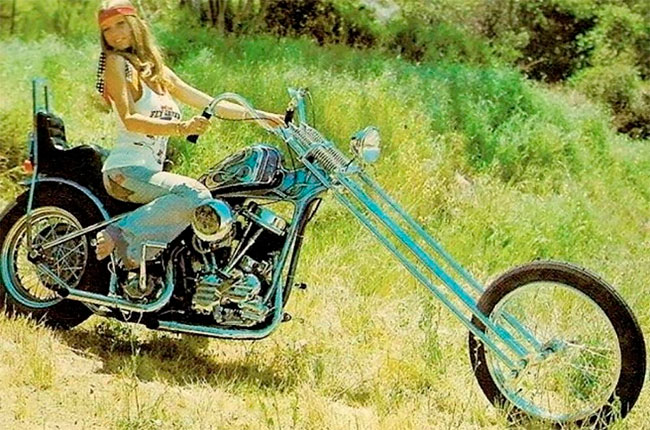 Perhaps the best known choppers are the two customized Harley-Davidsons, the “Captain America” and “Billy Bike”, seen in the 1969 film Easy Rider. 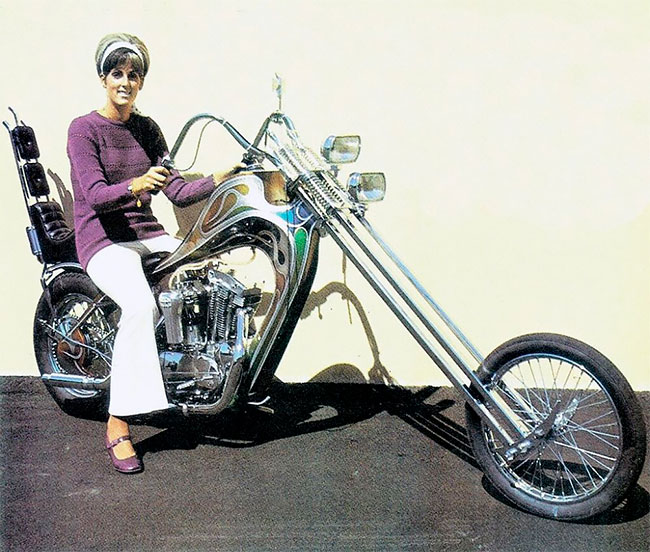 Kickass or badass—whatever you wanna call these tough biker ladies—here’s a selection of amazing vintage photos of young women with their easy rider choppers. 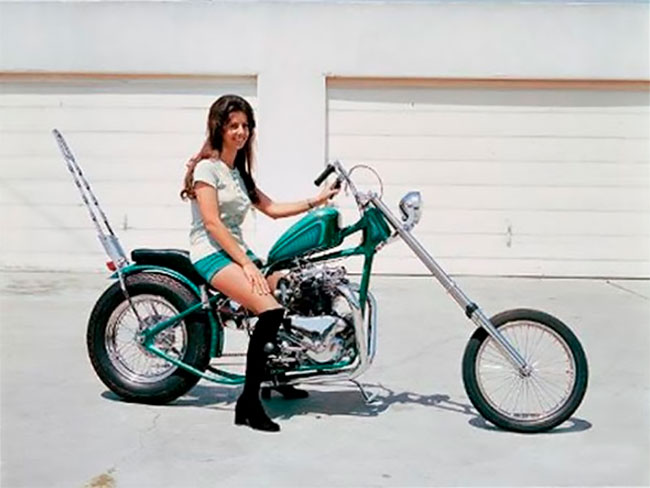 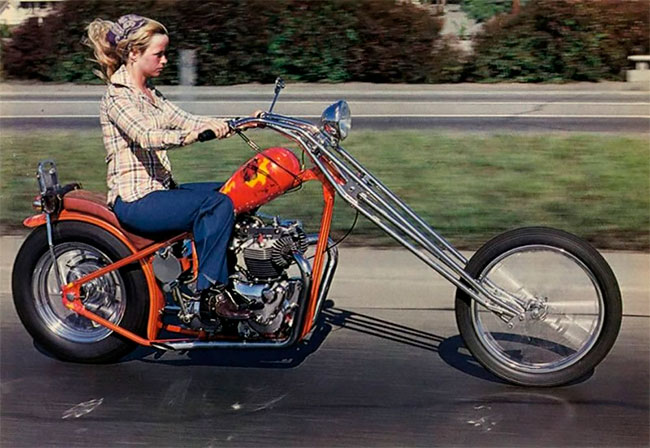 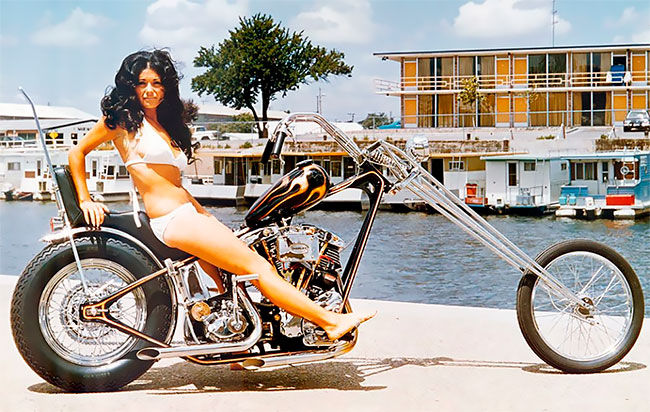 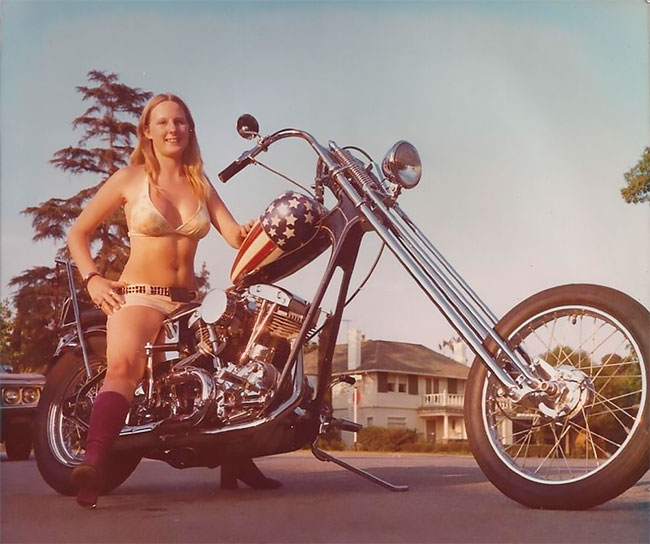 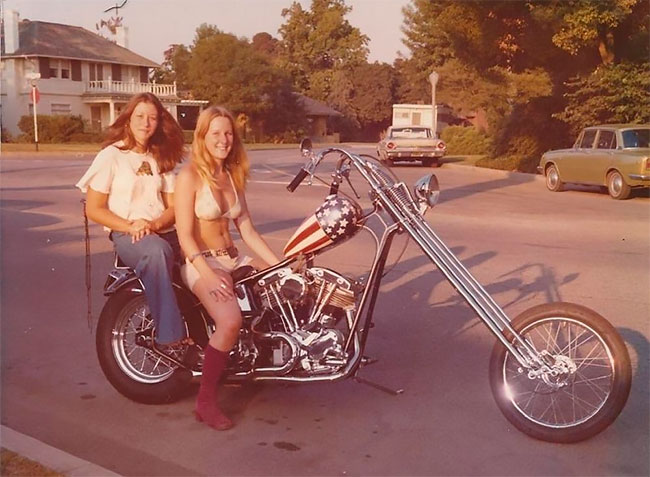 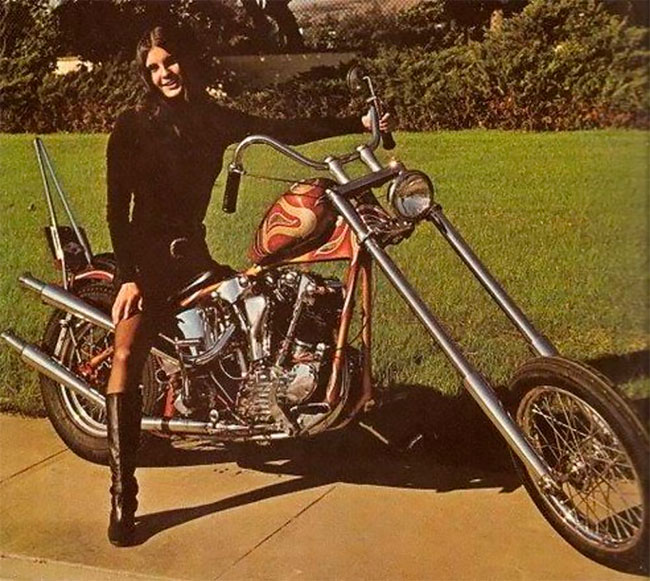 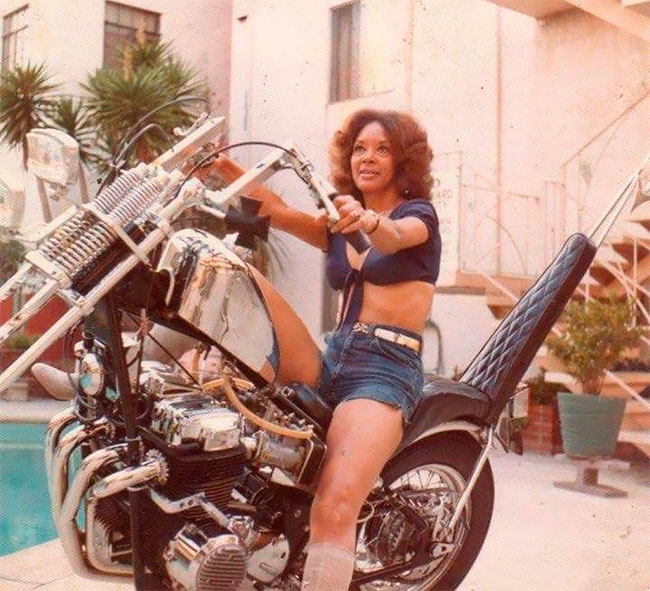 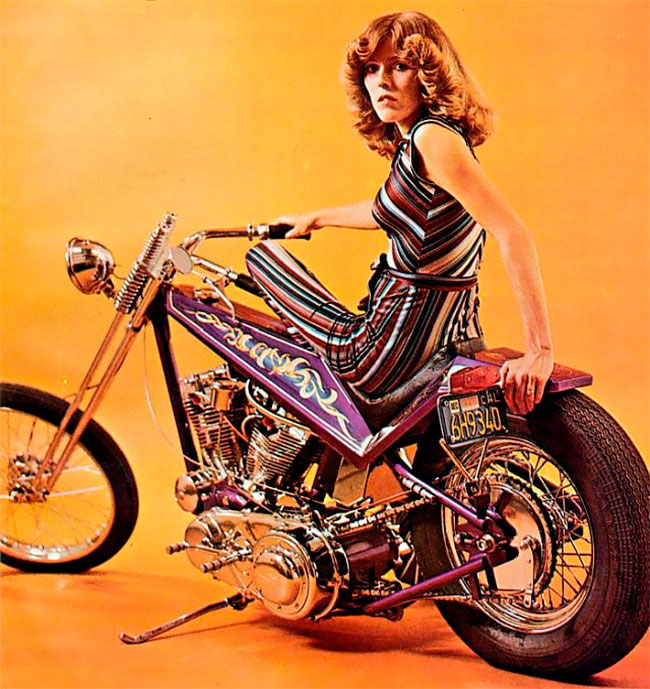 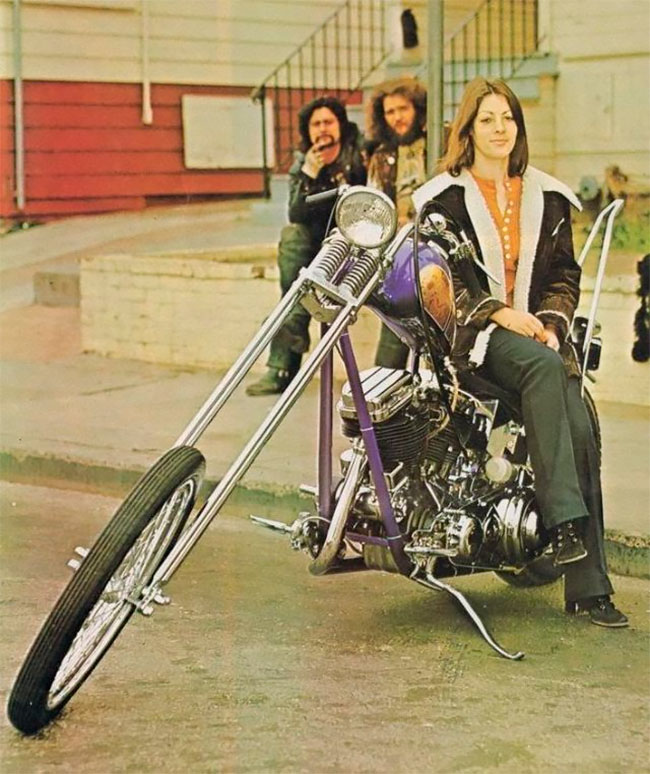 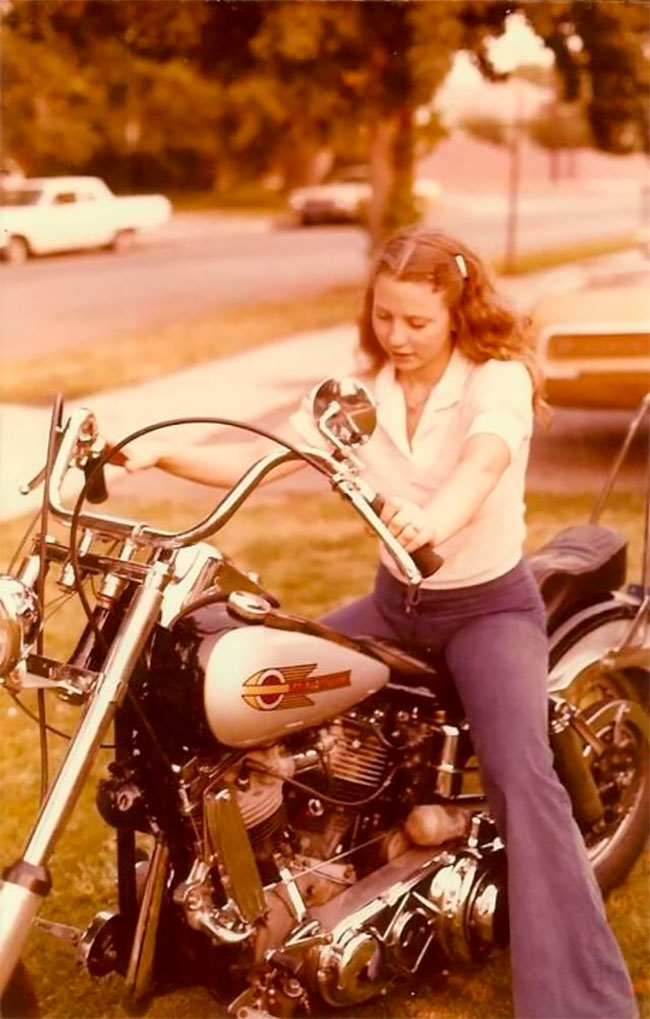 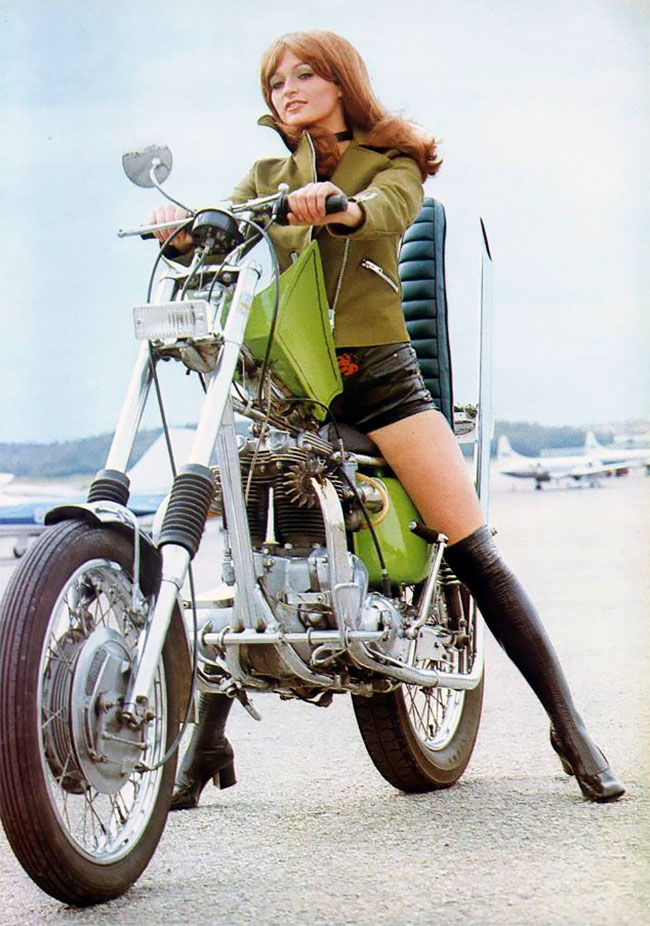 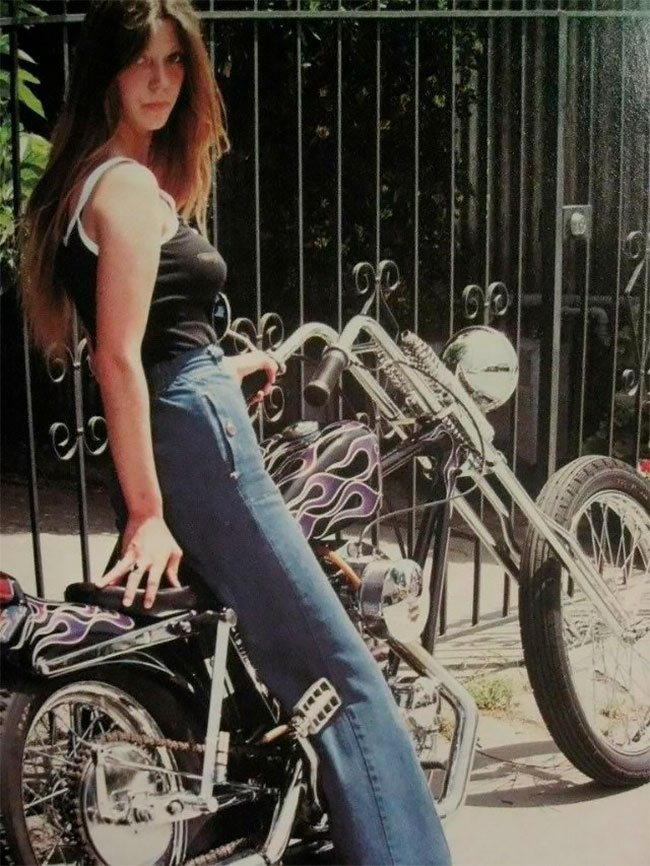 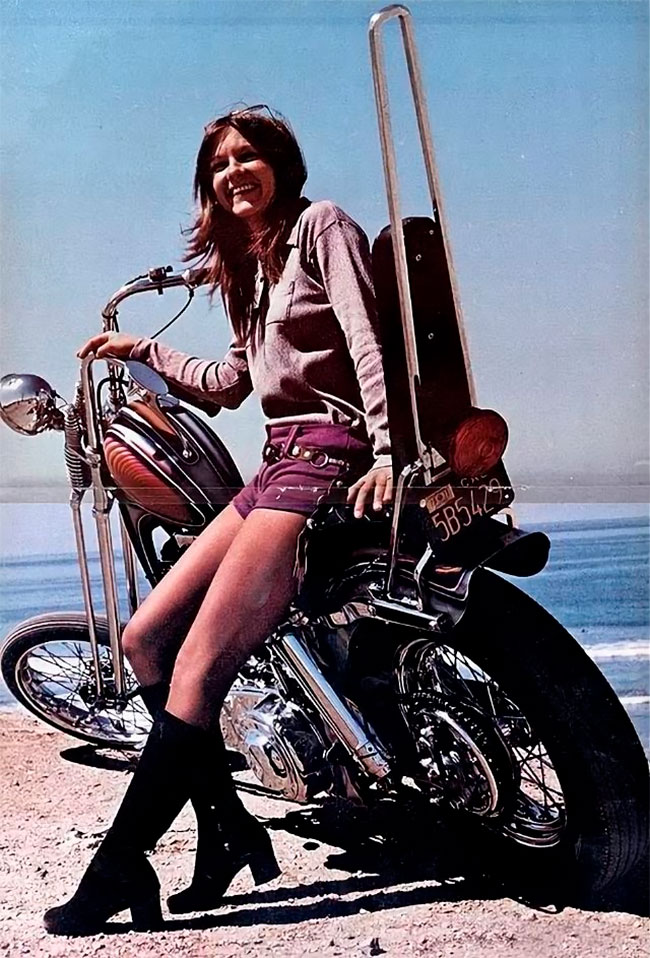 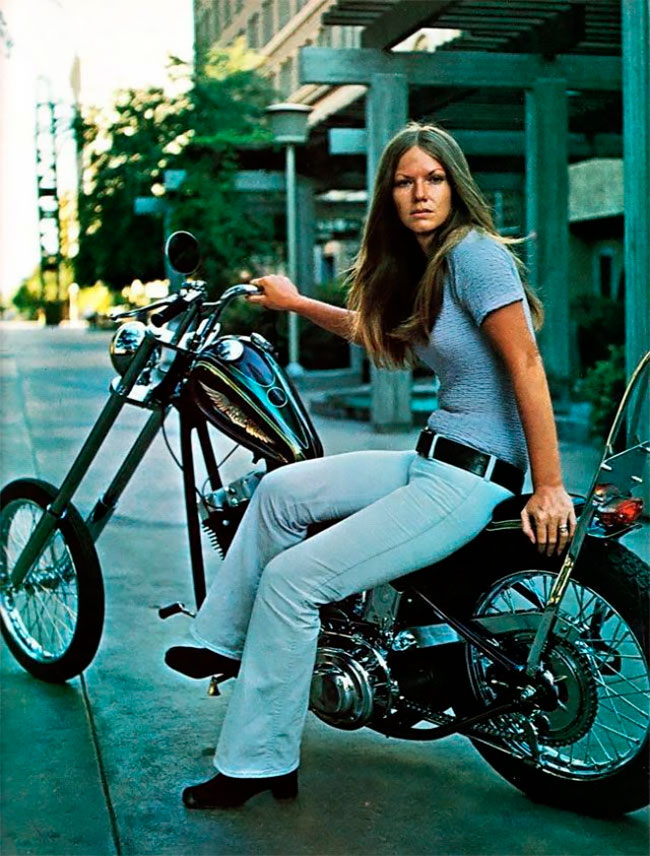 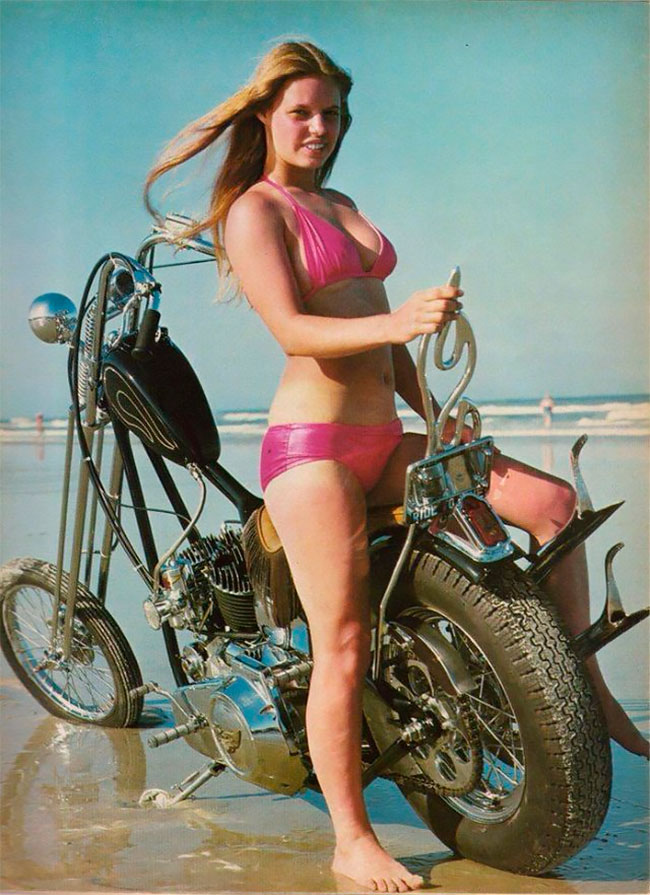 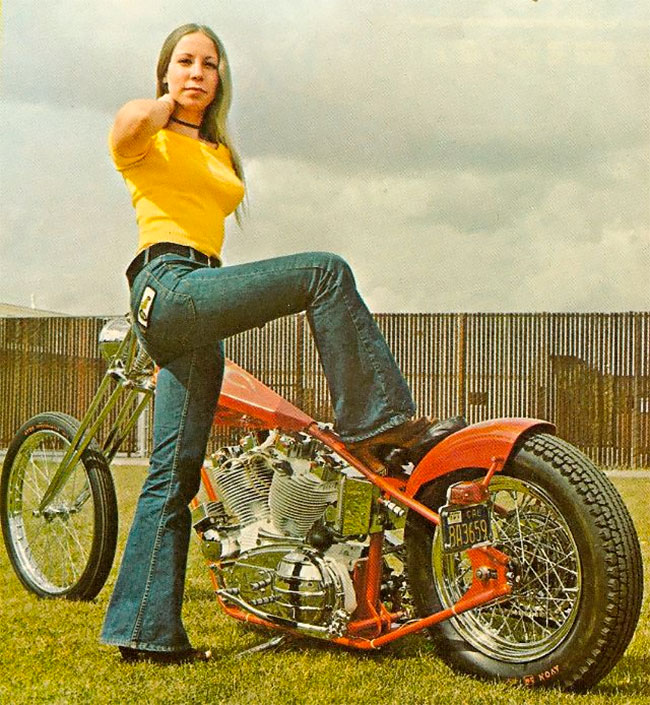 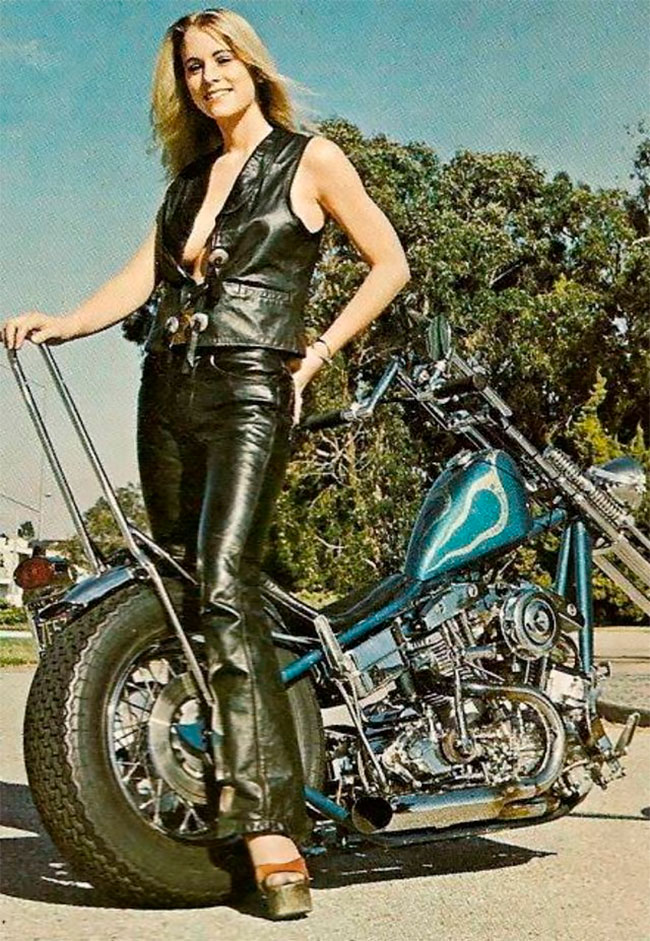 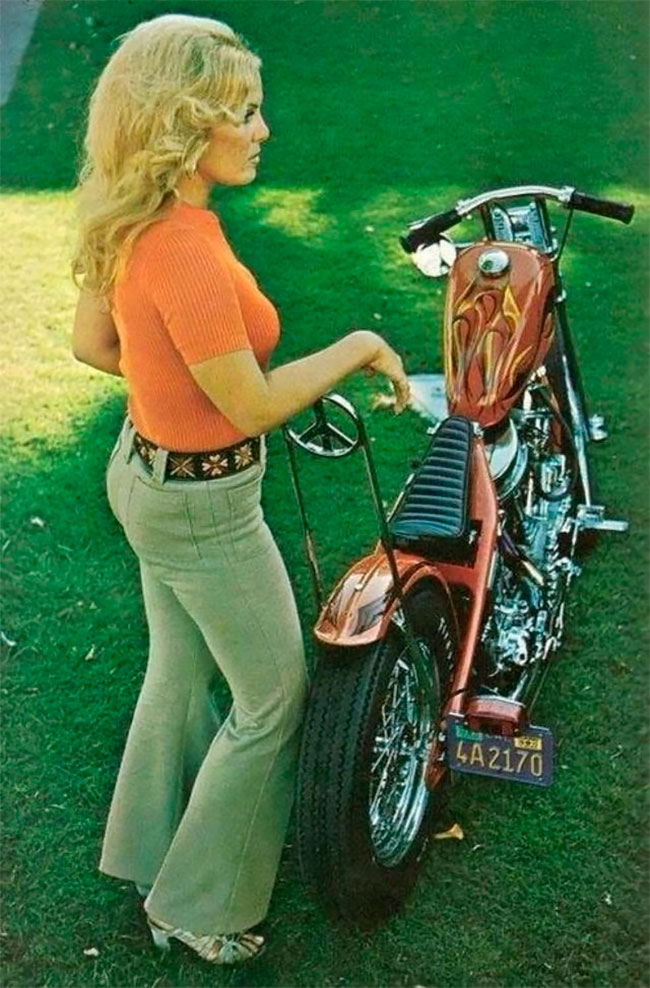 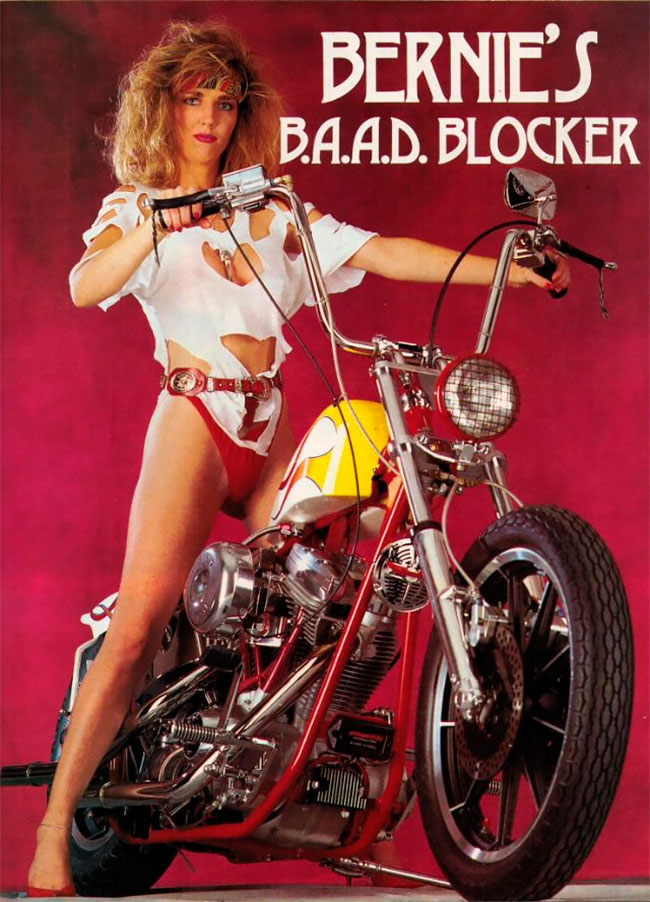 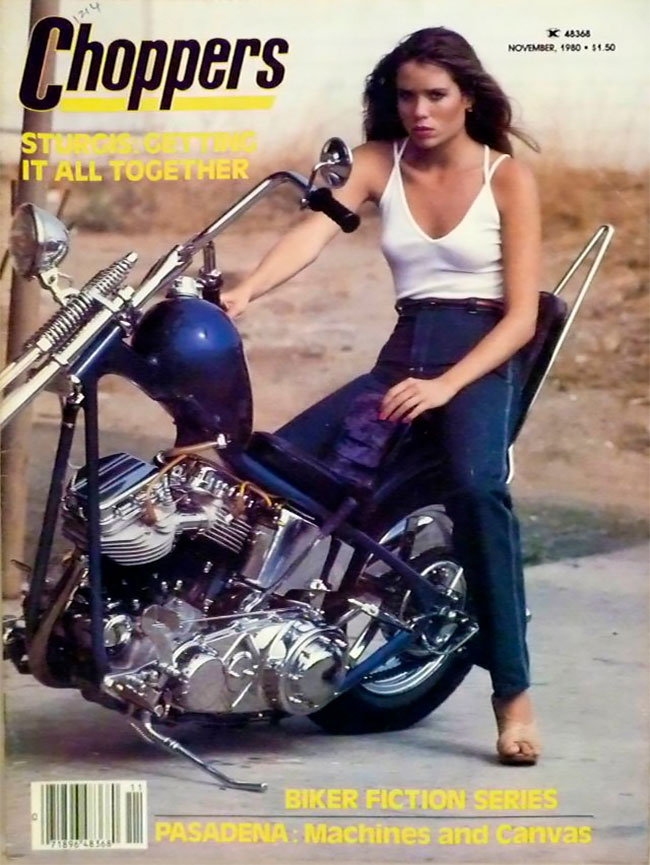 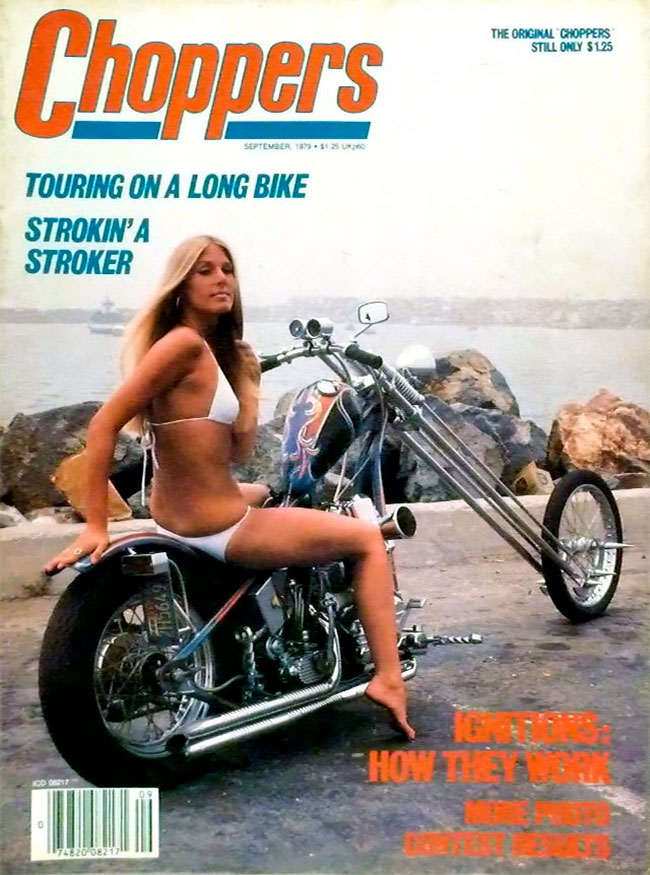 Spectacular Winning Photos of The Wildlife Photographer of the Year 2021
This Photographer Tied A Model Up In Shark-Infested Waters And It Was More Beautiful Than Scary
The Road to Auschwitz: 70 Years After Liberation
Photo of the Day: A Man and His Rooster
Photographer Captured Discarded Disposable Medical Masks And Gloves On The Street
Cool Photos Show What Bedrooms of Teenagers Looked Like in the 1980s
Celebrity Portraits Taken At The Vanity Fair Oscar Party 2017
Photographer Mom Takes Magical Autumn Portraits Of Her Kids
2016 Siena International Photography Awards Winners
Photographer Stijn Hoekstra Captures Empty Amsterdam During Curfew
National Geographic Travel Photographer Of The Year 2016 Winners
1986 Calendar Featuring Morris the Cat, the World’s Most Finicky Cat
Magical Urban And Natural Landscapes In Japan By Hiroki Furukawa
This Post Is Dedicated To All The Veterans Past, Present And Future
Photographer Mark Fearnley Captures City Streets In Minimalist Geometric Pictures
Vintage Photos Show What Kids Used to Do For Fun in the 1950s
Amazing Rare Photographs of the Montparnasse Train Wreck in 1895
Pictures of The Runaways Go Surfing in April 1976
Some Of Hollywood’s Most Beautiful Women Have Been Given A Shocking Bloody Make-Over To Highlight Domestic Violence
Close-Up Cuisine
Most Handsome, Best Dressed, Most Popular, Best Legs – Yearbook “Class Favorites” From The 1970s
Someone Found An Old Photo Album Full Of Pics Of This Woman And Hollywood Celebrities In A Thrift Shop
Breathtaking Photos Of London From Above
Chernobyl & Pompeii: 2018 Historical Photographer Of The Year Names Finalists
choppers, retro, women